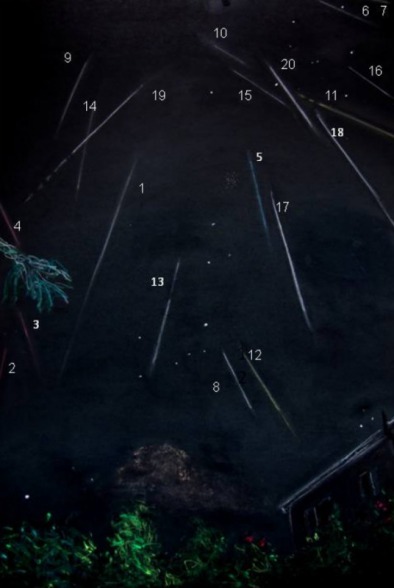 Perseids 2010 using , Pastel ,Conte and a White Gel Pen on Black Mounting Board. A composite sketch created in my garden between July 28th and August 10th 2010.

About 30 years ago we had a holiday in a remote location in the West of Ireland. The house was high on a grassy ridge on Bolus Head looking over St Finian’s Bay in Co Kerry. From this vantage point the 350 million year old Skellig Rocks rose like stegosaurus plates from the Atlantic Ocean. They were 16 kilometres out to sea but their jagged presence dominated the view to the South. It was early August and when darkness fell the predictable blinking of a distant lighthouse was the only manmade object discernible at sea level in the blackness.

One moonless evening, the sky was crystal clear, the summer triangle was dramatically intersected by our galaxy’s river of stars, so much more touchable than the suburban view. I lay on the sun dried grass looking for Perseids, one, two, three, four, five, six, plus several in the corner of my eye within a few minutes. Time to take action, I went into the house and dragged out several mattresses, and encouraged (made) my family and our guests come outside, lie down and look up. I have a vague memory of sofa cushions being shoved through windows at one point to help the nest-building.

As usual they thought I was mad, but soon they were seeing one of the year’s wonders in perhaps the darkest place on our island. We watched for satellites and my mattress guests (two families, four adults, four children) had never seen them either, so in between meteors we looked at these metal objects orbiting about 200 miles up.

A perfect viewing spot, we watched on a slight incline toward Perseus in North East, but the meteors came from what seemed like every direction. We watched many meteors sizzling into our atmosphere in dots and dashes with long gaps and differing lengths. The Perseids are the result of tiny cast – off particles from Comet Swift Tuttle, shed as it passed through our solar system on its 130 year orbit of our sun. Once a year the Earth’s journey round our sun brings our atmosphere and these remnants into contact with each other .These particles hit the atmosphere at huge speeds and burn up thereby offering the observer natural fireworks. Ancient elements revealed by their colours as they vaporise in front of our eyes.

I will never forget the perfection of the viewing, the WOW’s,the laughter and the joy of my family seeing this shower for the first time ever.This area of Kerry has become Ireland’s first International Dark Sky Reserve. The close by village of Ballinskelligs now hosts the annual Skellig Star Party .

Over the years since I have watched the Perseids from a deck chair in my garden, some escape the eye under hazy lights in suburbia. It is always the most exciting shower of the year and rarely disappoints. If you are lucky to have clear skies between mid July and mid August, no equipment is needed, just you and your eyeballs. If you want to fill out an observing sheet to record, the colour, length, duration, direction, location, hourly rate of your Perseids then they are easy to find online.

Post midnight is the best time to view. The Earth has left the Belt of Venus long behind and has rolled toward the night were other suns populate the soft deep cloak of space. The Perseids bring nano seconds, and multi seconds of wispy joy to all who take the time to look up from mattresses or other comfy viewing places.

Occasionally I record the Perseids in a drawing, yes a drawing built up over several weeks . The way I went about this was to observe each meteor and record not only its magnitude, length et cetera but to also draw a representation of it on black card. I made notes on one sheet and drew on the card, so afterwards I could photograph the drawing and drop in the numbers to relate to my recorded data.

The Perseid Meteor Shower 2016 Facts
The Perseid Meteor Shower peaks on the night of August 12th 2016 but any clear evening up to and a few nights after should produce some meteors. Look to the NE after midnight, look under the big W of Cassiopeia and that is the location of Perseus.Earth will pass through the path of Comet Swift-Tuttle from July 17 to Aug 24.The waxing gibbous moon may be an issue this year but when it sets, the sky will deliver Persieds for your delight.

Belt of Venus
Look to the eastern horizon on a clear evening after sunset, when no clouds obstruct your view. You will see a pinkish glow or antitwilight arch or belt of colour that extends about 10 – 20 degrees above the horizon. Often the glow is separated from the horizon by a dark blue layer. This blue layer is the shadow of the Earth. The rose-pink colour is due to scattering of reddened light from the setting sun. These coloured bands are known as The Belt of Venus.

Sketch details
Cassiopeia (top right) – Perseus (Middle)- Capella (lower left) in Auriga and as many stars as I could see in between from my suburban view.

My town street lights are partly screened by tall trees, the view to the N / NE and over head was dark. The Double Cluster was visible naked eye and M 31 was there with averted gaze. The Milky Way had visible knotted areas overhead on August 9th and 10th, unusual for Bray.

Some stars are sketched brighter than they appear to stand out for the photograph of the sketch
which was too big to scan. I was sitting in my garden looking up over the pergola. On part cloudy
evenings, I put several chairs around the garden and moved to view different areas of the sky when
clear sections appeared. Each hour on the hour I took a break for tea, kept the lights off in
the house to try to keep my dark adaption. The meteors are as close to what I saw in length and colour as is possible to sketch.
Kerry International Dark Sky Reserve
Skellig Star Party 2016

5  |  On the richness of the lunar surface

7  |  Grand Finale – Painting inspired by the Cassini Mission to Saturn