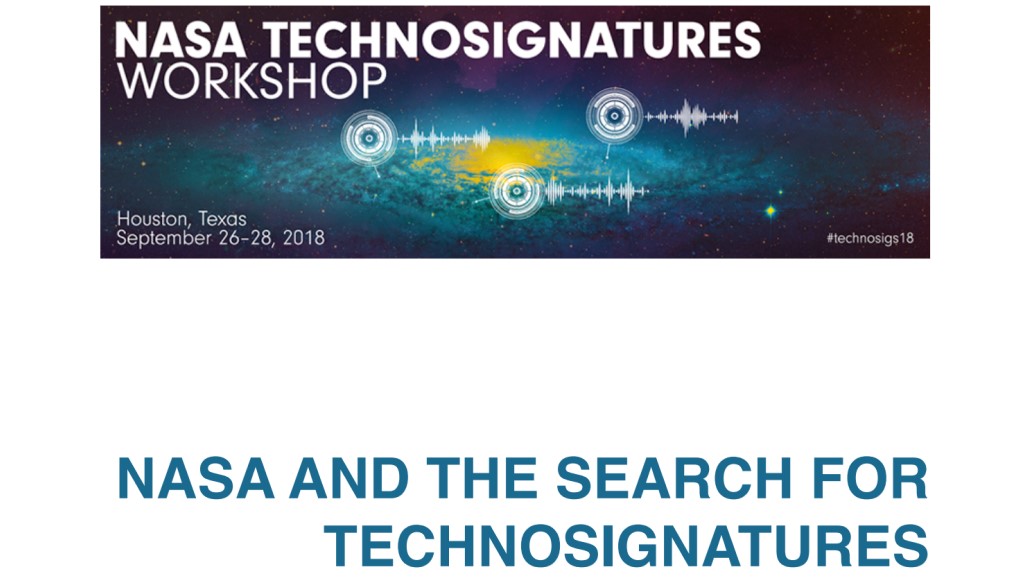 Hey, can you ask for any better title to a Sacred Space Astronomy article than that?

Yes, giant, star-orbiting structures, built by hyper-advanced alien civilizations, are (as they say) “a thing”.  Or, at least they are a plausible thing.

In 2018 the NASA “Technosignatures Workshop” took place in Houston Texas (click here).  A report from the workshop was published: “NASA and the Search for Technosignatures” (freely available—click here for it).  The report explains that, “the term ‘technosignatures,’ a contraction of ‘technological signatures’ or ‘signatures of technology,’ first appears in the literature in an article by Jill Tarter” from 2007.  Tarter defined it as “evidence of some technology that modifies its environment in ways that are detectable”.  And one possible technosignature is giant, star-orbiting structures—otherwise known as “megastructures”—built by hyper-advanced alien civilizations.

One participant in the Technosignatures Workshop, Jason Wright of Pennsylvania State University, provides a discussion of megastructures in the 2016 paper “The Ĝ Search for Extraterrestrial Civilizations with Large Energy Supplies. IV. The Signatures and Information Content of Transiting Megastructures” that he and others from Penn State wrote and that was published in The Astrophysical Journal.  The following is from this paper, condensed with some paraphrasing/editing for a broader audience than the readers of The Astrophysical Journal (you can click here and read the original paper):

Advanced, spacefaring civilizations might have significant effects on the environment around their home star, including the construction of planet-sized structures or swarms of objects. Such “megastructures” might be detectable both by the starlight they block, and by the mid-infrared radiation they emit after reprocessing this light.

Why construct such structures? Here are two general and plausible ideas:

(1) To harvest energy and dispose of it. Large starlight collectors are an obvious and long-term means to collect a very large, sustainable energy supply (indeed they may be the only such means) and large radiators are necessary means to dispose of that much energy after its use.

(2) To serve as powerful, long-lived, low-maintenance “beacons”—signals of unambiguously intelligent origin that by their very existence delivered a simple “we are here” message over long distances in a manner likely to be detected.

If a civilization undertook megaengineering projects, the effects on the star would be detectable, and potentially dramatic. Specifically, large light-blocking structures around a star would obscure the star, making it dimmer in the optical, and reradiate the collected starlight in the thermal infrared (according to its effective temperature).

Long-term, precise photometric monitoring of stars for transiting exoplanets by the Kepler space-based telescope was effectively a search for alien megastructures while searching for transiting planets, because Kepler had the capacity not only to detect such structures but the photometric precision to distinguish many classes of megastructures from exoplanets. In principle, then, an analysis of Kepler (or similar) data should provide an upper limit to their frequency in the Galaxy.

So, megastructures are things that could plausibly exist, and in the Kepler mission (designed to detect planets orbiting other stars—launched in 2009 and ended in 2018), we had the ability to detect such things as they occulted (blocked) the light of the stars they might be orbiting.  Interestingly, Wright and his coauthors warn that “invoking alien engineering to explain an anomalous astronomical phenomenon can be a perilous approach to science because it can lead to an ‘aliens of the gaps’ fallacy and unfalsifiable hypotheses.”

It seems to me that one particularly interesting thing about megastructures that makes them very appealing technosignatures is that they might outlast their civilizations by a long time.  If something happened to wipe out humankind, our radio transmissions would cease.  Traces of our civilization would all but vanish in 10,000 years or so.  The satellites we put into high Earth orbit, however, or into solar orbit, might well remain intact—an indication that “we were here”.  Since the early 1960s astronomers like Frank Drake, Carl Sagan, Tarter, and many others who have engaged in the “Search for Extra-Terrestrial Intelligence”, or SETI, have listened for radio signals from other civilizations.  Those signals would end when the civilization ends.  Megastructures would be like the pyramids of Egypt—durable witnesses to a bygone great civilization.

In “NASA and the Search for Technosignatures”, we find this:

For ideal stars (brighter than 12th magnitude), Kepler had a sensitivity to approximately Earth-radius occulters on a timescale of hours. Of the ~200,000 Kepler stars observed, there are no clear examples of stars that cannot be explained naturally, although no formal upper limits have been calculated.

Keep in mind that the vast majority of those stars did not turn out to have Earth-sized planets orbiting in their habitable zones—that is, orbiting at distances where the temperature of a planet might be suitable for life as we know it.  But those 200,000 stars still tell us something.

For example, some people challenge the idea of life as we know it.  Maybe, they say, there is life out there that can survive very high temperatures, or very low temperatures, or extreme gravity/radiation/whatever; in other words, maybe life is not be bound by our ideas of what life is.  Well, those 200,000 stars tell us that, if there is such life out there, it clearly does not readily advance to a level of constructing megastructures around stars.  The galaxy clearly is not crawling with hyper-advanced civilizations.

The lack of megastructures fits in with an historical trend.  Back in the day, astronomers like Drake, Sagan, and others suggested there might be a million technologically advanced extraterrestrial civilizations in our galaxy alone, and SETI seemed like a logical idea.  However, the SETI effort has been going on for decades in various iterations.  No radio signals have been detected.

Astronomers have not limited themselves to radio signals.  We humans get our resources from our planet.  Imagine a civilization that can harvest resources directly from its sun, and that can destroy planets—think of something like the First Order in Star Wars: The Force Awakens!  But then, imagine a civilization that can extract resources at a galactic level, one that could crush the First Order like a modern military could crush even the best army from the mid-nineteenth century.  It might take hundreds of thousands of years for an intelligent race to advance to such a point, but since the universe appears to be 14 billion years old, time is no problem.  A Russian astronomer named Nikolai Kardashev speculated about these sorts of things back in the 1960’s.  Since then, astronomers have talked about Kardashev Type I (planet-level), Type II (sun-level), and Type III (galaxy-level) civilizations.

Type II and III civilizations would be powerful; they would be the ones who might build megastructures.  If they exist, they should not be hard to see.  Yet they are not seen—and astronomers have looked.  For example, Wright made news some years ago with a search of 100,000 galaxies for signs of alien “supercivilizations”.  No luck.

The lack of obvious evidence for extraterrestrials is actually a very strong argument against the existence of them at all.  If advanced extraterrestrial life is common, then the universe is big enough, and old enough, that some supercivilization should have cropped up somewhere—maybe next door, actually—and it should stand out like a sore thumb.  That none do says that technologically advanced intelligent extraterrestrial life is actually not common.  This is called the “Fermi Paradox”, named for the physicist Enrico Fermi, who supposedly raised this point back in the middle of the twentieth century in response to colleagues who were gushing enthusiastically about extraterrestrials.

In the 1970’s, an astronomer named Michael Hart brought up this line of reasoning in response to SETI enthusiasm.  In a 1975 paper entitled “An Explanation for the Absence of Extraterrestrials on Earth”, he argued in essence that there was no good way around the Fermi Paradox, and therefore technologically advanced extraterrestrial civilizations were actually not at all common, and “an extensive search for radio messages from other civilizations is probably a waste of time and money.”

I might not be so harsh, even now, half a century (yikes!) later.  If we do not look, we cannot find.  And once upon a time I was quite the fan of SETI.  I participated in the SETI@home project, in which participants volunteer the “idle time” (screen-saver time) of their computers for the processing of signals received by a radio telescope, in hopes of finding an artificially generated signal.  I loaded the SETI@home app onto the computers in the computer labs of my college, Jefferson Community & Technical College (then just Jefferson Community College), and got my college up into the top 1% of all participants in the program.  The screen shot below of Jefferson’s ranking in the program (I was very pleased to have my little college ranked so high among all participants, so I saved a record of it!) dates from the late 1990’s (yikes again!).

Yet we have to acknowledge the data, the facts before us.  The fact is, we keep thinking of ways to look for signs of advanced civilizations out there, and we keep finding nothing.  The fact is, Hart was a half century ago, and my efforts with SETI@home were a quarter century ago!

Even at this point, however, I would not say SETI is a complete waste of time and money.  I would say we should spend money on it in a very sparing manner.  Mining Kepler data for evidence of advanced extra-terrestrial civilizations seems to make a lot of sense—it uses “material on hand”.  It’s cheap!

And remember—no advanced civilizations does not necessarily mean “we are alone”.

It might be that we are alone indeed. At least, it might be that any other civilizations out there are so rare and so widely scattered across the universe that we will never find them.  Our study of exoplanets has revealed that there are not a lot of Earth-like planets out there (meaning Earth-sized, in the habitable zone of a sun-like star), so being “sensibly alone” is a possibility.

But there are other possibilities.  We might just be the most advanced civilization around.  What if the vast majority of civilizations top out at the level of the Aztecs, or of the Romans, or of the indigenous technology of the Chinese or Indians?  They won’t be building giant star-orbiting structures, or sending radio signals.  Our technosignatures searches will fail, and we will probably never know that those civilizations exist.