In the weeks to come, I will be presenting two sets of ongoing reflections.  One set will explore “Priests and Religious of Science,” examining the lives of clergy and religious whose ministry and work are a living witness to the inclusive relationship between faith and science that is embraced by the Church. The other set will explore “God and Creation,” examining theological perspectives from the Catholic tradition on the relationship between God and the created world.  Today’s post will be on “God and Creation,” exploring the thought of St. Irenaeus of Lyons in regard to the opulence of God.

Irenaeus of Lyons is one of the most significant early Church Fathers.  Scholarly opinion places his birth at about 120 AD (give or take five years) and was one of the strongest theological voices to address the problem of Gnosticism in the early Church (I have touched on Gnosticism in my earlier posts).  Another part of his significance is that he was a disciple of St. Polycarp, who was a disciple of John the Apostle.  Therefore, Irenaeus provides us with an important window into the apostolic age.  In regard to God and creation, Irenaeus used a number of striking metaphors to explore this relationship such as God as Master Architect and God as Master Artist. (For more on this, check out this brief article by Bishop Barron.)  These and other images of God were central to his theological understanding of the Economy of God, or the slow working out of the plan of salvation.  A core aspect of the Economy of God is the development of the soul, moving from infancy to maturity. 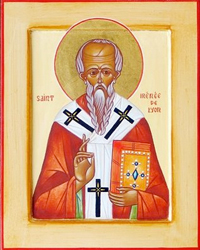 Click on the Icon to read Bishop Barron’s article on Saint Irenaeus!

Now, having made man lord of the earth and all things in it, He (God) secretly appointed him lord also of those who were servants in it. They however were in their perfection; but the lord, that is, man, was (but) small; for he was a child; and it was necessary that he should grow, and so come to (his) perfection. And, that he might have his nourishment and growth with festive and dainty meats, He prepared him a place better than this world, excelling in air, beauty, light, food, plants, fruit, water, and all other necessaries of life, and its name is Paradise. And so fair and good was this Paradise, that the Word of God continually resorted thither, and walked and talked with the man, figuring beforehand the things that should be in the future, (namely) that He should dwell with him and talk with him, and should be with men, teaching them righteousness. But man was a child, not yet having his understanding perfected; wherefore also he was easily led astray by the deceiver. (Irenaeus, The Demonstration of the Apostolic Preaching. 12)

This language is obviously tied with Irenaeus’ understanding of sin, moving the soul from immaturity to maturity.  This early language lacks the doctrinal precision of St. Augustine and St. Thomas’s writings on Original Sin, but for the sake of this reflection, it is sufficient to say that Irenaeus’ understanding of the development of the human person displays an obvious dependency upon God to bring the soul to full maturity so as to avoid “the deceiver.”  At this point, we can pick up the theme implied in the title of this post: The Opulence of God.

When one hears the word “opulence.” the mind initially races toward riches.  In the secular world, opulence can take on a very negative sense, associating the word with excessive wealth, exploitation of the poor, and economic systems that fail to care for the most vulnerable of society.  In the Biblical sense, the opulence of God means something very different.  One of the central Biblical ideas of the opulence of God is found in Second Corinthians when St. Paul reflects upon the self-emptying of God’s love in Jesus Christ.

For you know the gracious act of our Lord Jesus Christ, that for your sake he became poor although he was rich, so that by his poverty you might become rich. (2 Corinthians 8:9)

This image of the “riches of God” being emptied in Christ, voluntarily taking on poverty so that we may be made “rich,” is rightly understood as God sparing nothing for humanity.  In Eric Osborn’s text simply entitled, Irenaeus of Lyons, he provides a concise explanation of how Irenaeus explores the Biblical framework of the opulence of God.  Osborn argues that from God’s power, goodness, and wisdom comes forth all that exists while God’s love and kindness sustains this creation.  Therefore, creation itself is an expression of the opulence of God, shown through beauty and the maturation (or evolution) of all things.  Osborn references book four of St. Irenaeus’ work, Against Heresies, to demonstrate this point.

With God there are simultaneously exhibited power, wisdom, and goodness. His power and goodness [appear] in this, that of His own will He called into being and fashioned things having no previous existence; His wisdom [is shown] in His having made created things parts of one harmonious and consistent whole; and those things which, through His super-eminent kindness, receive growth and a long period of existence, do reflect the glory of the uncreated One, of that God who bestows what is good ungrudgingly. For from the very fact of these things having been created, [it follows] that they are not uncreated; but by their continuing in being throughout a long course of ages, they shall receive a faculty of the Uncreated, through the gratuitous bestowal of eternal existence upon them by God. And thus in all things God has the pre-eminence, who alone is uncreated, the first of all things, and the primary cause of the existence of all, while all other things remain under God’s subjection. But being in subjection to God is continuance in immortality, and immortality is the glory of the uncreated One. By this arrangement, therefore, and these harmonies, and a sequence of this nature, man, a created and organized being, is rendered after the image and likeness of the uncreated God, -the Father planning everything well and giving His commands, the Son carrying these into execution and performing the work of creating, and the Spirit nourishing and increasing [what is made], but man making progress day by day, and ascending towards the perfect, that is, approximating to the uncreated One. For the Uncreated is perfect, that is, God. Now it was necessary that man should in the first instance be created; and having been created, should receive growth; and having received growth, should be strengthened; and having been strengthened, should abound; and having abounded, should recover [from the disease of sin]; and having recovered, should be glorified; and being glorified, should see his Lord. For God is He who is yet to be seen, and the beholding of God is productive of immortality, but immortality renders one nigh unto God. (Against Heresies, Book 4, Section 38, Paragraph 3)

This theological vision demonstrates a harmonious union between God and creation, arguing that God has not only brought all things into existence, but also provides grace to sustain creation and allows it to grow.  I find it fascinating that one of the earliest, non-scientific, post-resurrection theologies of the relationship between God and creation demonstrates a deep openness to a vision of the world that not only can evolve, but must evolve as part of the Economy of God.  Of course, we need to be careful not to jump to the conclusion that Irenaeus’ vision is completely consistent with modern science, but it does display a basic theological and philosophical intuition that affirms the twofold reality of an unchanging God whose creation is constantly changing.  This dynamic, which finds its historical roots in the writings of Heraclitus and Parmenides, inspired later theologians to further develop this relationship between God and creation, finding its high point in Blessed John Henry Newman when he penned, To live is to change, and to be perfect is to have changed often!

This vision of the opulence of God also contains an implicit ethic.  If the “riches of God” implies that all has been given by God, sparing nothing out of love for humanity, then we have a responsibility to embrace a similar “self-emptying” ethic to ensure and affirm the dignity of all of creation.  If the understanding of the “riches of God” was nothing more than a “super-being” hording the gold of the world, begrudgingly giving small portions of these riches to humanity from time to time, then we would find justification for the same type of exploitation and greed toward our neighbor. However, the Christian understanding of God is of one whose “treasure-trove” is completely empty, giving all in a free act of love.  From this perspective, we see that every part of creation is gift, should be treated as such, and we are called to approach creation with a similar self-emptying love to build up the common good.  Since creation changes and develops, we need to understand how creation changes and develops.  This ethic of free, self-giving love calls us to build up one another in Christ and care for our common home to protect and promote human dignity.  Put another way, the opulence of God is meant to realize one of the most oft-quoted ideas of St. Irenaeus: The glory of God is man fully alive, and the life of man is the vision of God!

As we come to the end of this post, how are we being calling to be good stewards of “God’s riches?”  Does our attitude reflect a gratuitous God that spares nothing out of love for us or a begrudging king who is prone to hording and exploitation?  Pray with this question of the opulence of God and, together, may we embrace a heart willing to imitate the generous love of Jesus Christ.