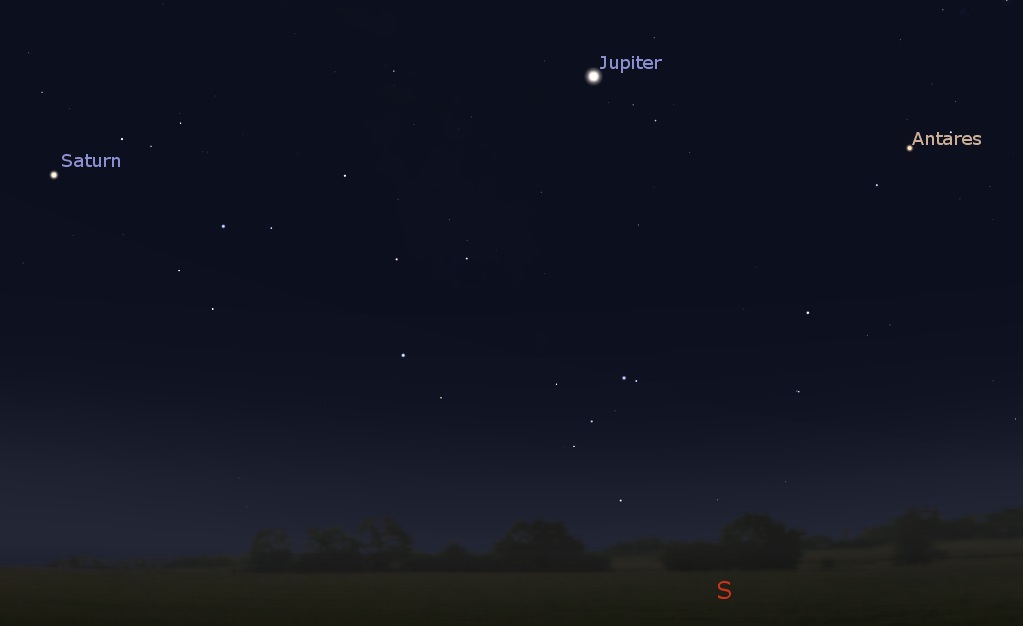 Stellarium version 0.19.0 has been released; I use Stellarium to create images for every one of these posts. When I receive new outreach requests, I frequently use Stellarium to see what the nighttime sky will look like on those future dates. The new version has code optimizations, some user interface improvements, and includes 5 new sky cultures. Stellarium is free, and available for the PC/MAC/Linux.

Saturn, Jupiter and the star Antares appear in south-southeastern predawn sky this week.

Mars continues to appear high in the western sky by the Pleiades all week. 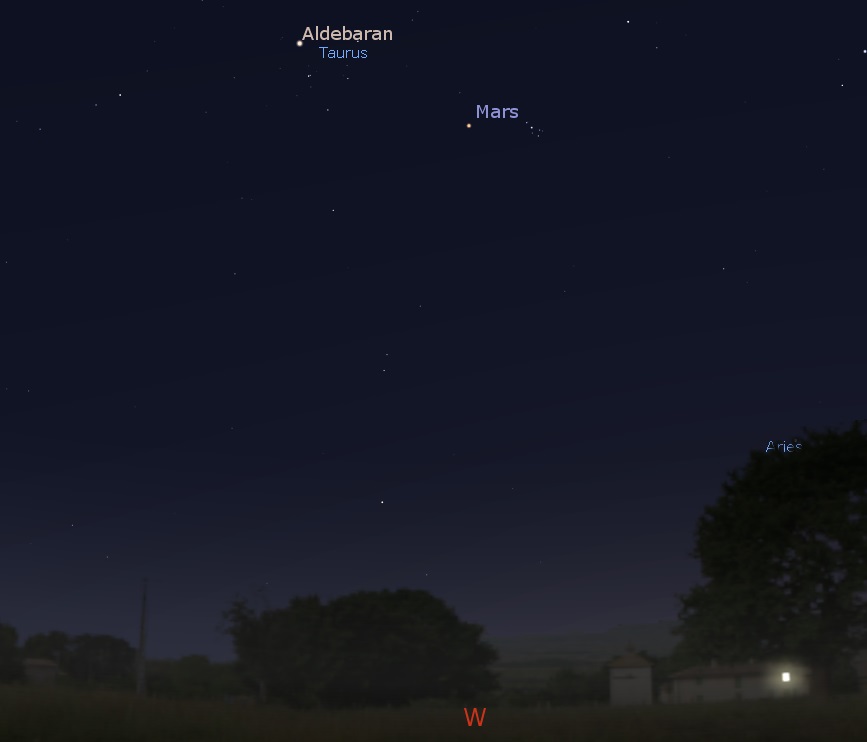 Mars near the Pleiades high in the western sky after dark on Apr. 2, 2019. Credit: Stellarium / Bob Trembley. 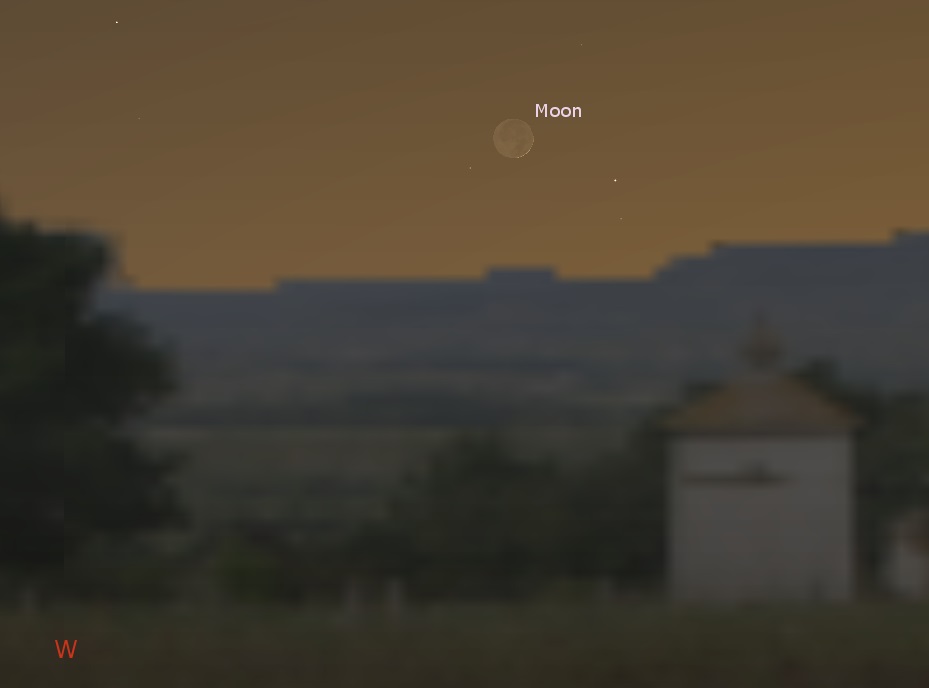 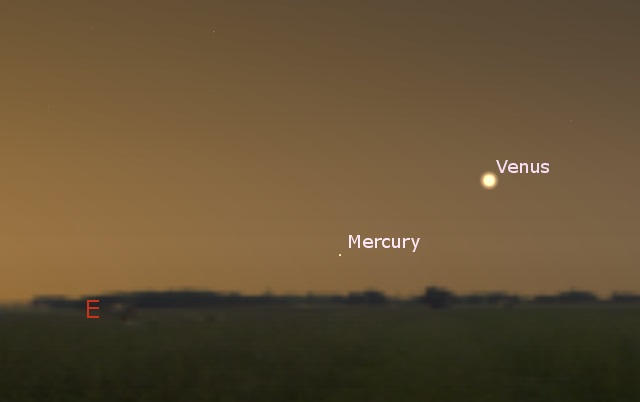 The Moon joins Mars and the Pleiades in the western sky after dark on Apr. 8th. 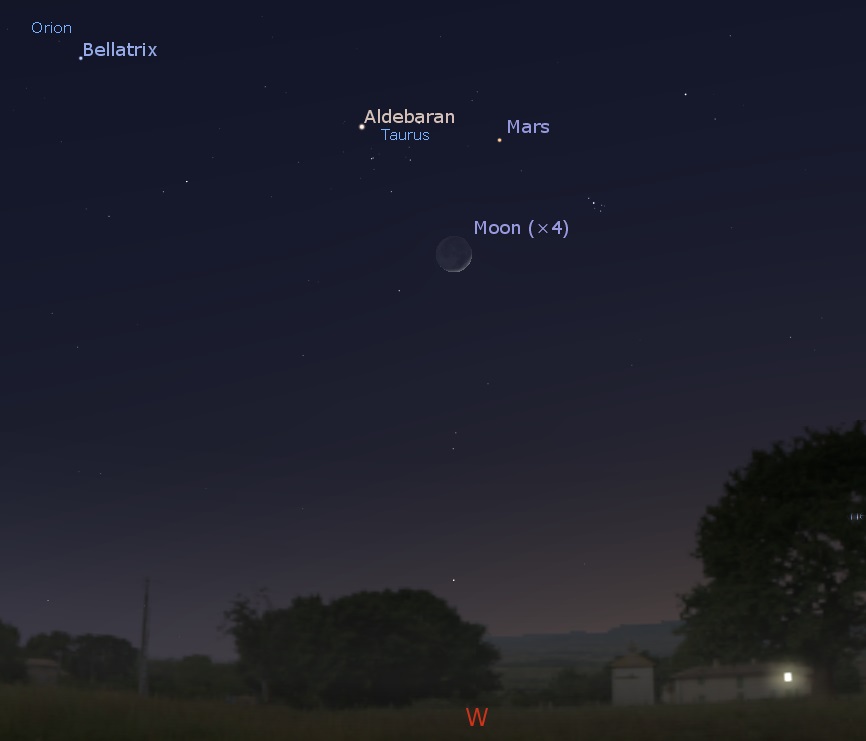 The Moon, Mars and the Pleiades in the western sky after dark on Apr. 8, 2019. Credit: Stellarium / Bob Trembley. 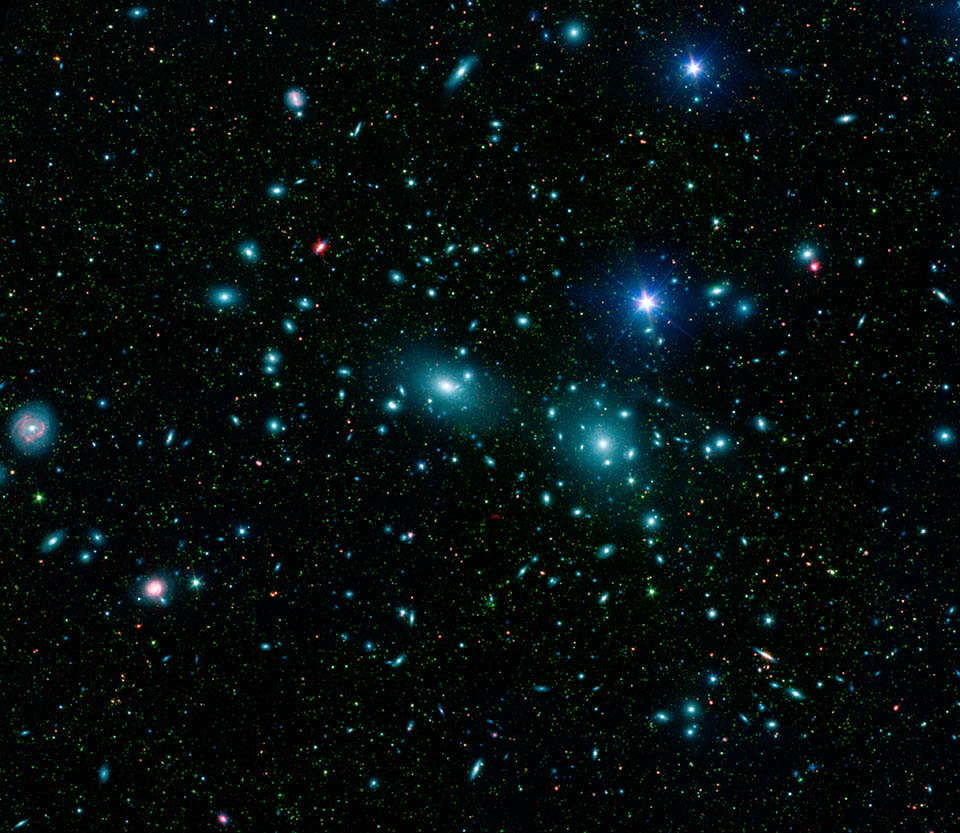 This false-color mosaic of the central region of the Coma cluster combines infrared and visible-light images to reveal thousands of faint objects (green). Follow-up observations showed that many of these objects, which appear here as faint green smudges, are dwarf galaxies belonging to the cluster. Two large elliptical galaxies, NGC 4889 and NGC 4874, dominate the cluster’s center. The mosaic combines visible-light data from the Sloan Digital Sky Survey (color coded blue) with long- and short-wavelength infrared views (red and green, respectively) from NASA’s Spitzer Space Telescope.

The Coma Cluster (Abell 1656) is a large cluster of galaxies that contains over 1,000 identified galaxies. Along with the Leo Cluster (Abell 1367), it is one of the two major clusters comprising the Coma Supercluster. It is located in and takes its name from the constellation Coma Berenices.

The cluster’s mean distance from Earth is 99 Mpc (321 million light years). Its ten brightest spiral galaxies have apparent magnitudes of 12–14 that are observable with amateur telescopes larger than 20 cm. The central region is dominated by two supergiant elliptical galaxies: NGC 4874 and NGC 4889. The cluster is within a few degrees of the north galactic pole on the sky. Most of the galaxies that inhabit the central portion of the Coma Cluster are ellipticals. Both dwarf and giant ellipticals are found in abundance in the Coma Cluster. – Wikipedia

The sketch below is how you might see the Coma Cluster in s moderately-sized amateur telescope: 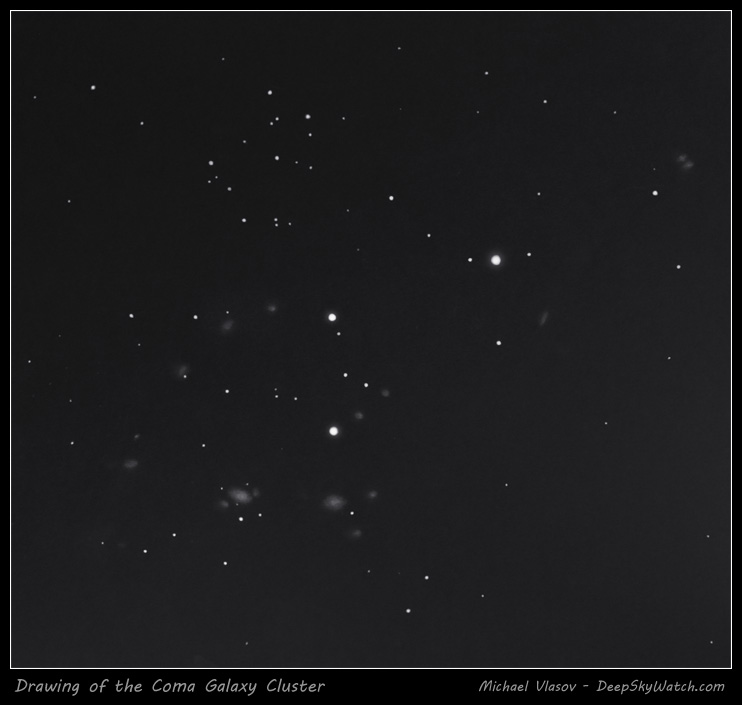 Here’s an image of the Coma Cluster from the Hubble Space Telescope:

This is a Hubble Space Telescope mosaic of a portion of the immense Coma cluster of over 1,000 galaxies, located 300 million light-years from Earth. Hubble’s incredible sharpness was used to do a comprehensive census of the cluster’s most diminutive members: a whopping 22,426 globular star clusters. Among the earliest homesteaders of the universe, globular star clusters are snow-globe-shaped islands of several hundred thousand ancient stars. The survey found the globular clusters scattered in the space between the galaxies. They have been orphaned from their home galaxies through galaxy tidal interactions within the bustling cluster. Astronomers will use the globular cluster field for mapping the distribution of matter and dark matter in the Coma galaxy cluster. Credits: NASA, ESA, J. Mack (STScI), and J. Madrid (Australian Telescope National Facility)

Season 3 of our Gravity Assist podcast is coming soon. And it’s all about lunar science and our journey from #Moon2Mars. For now, catch up on Seasons 1 and 2. Our favorite episode? The Moon with Sarah Noble?https://t.co/qqvyNcDGPf pic.twitter.com/qtD94PHXvl

Here's one of our favorite @LRO_NASA images for #MoonCrushMonday. The eastern rim of Dionysius crater shows the effects of an impact, with darker cooled lava below flows of lighter-colored dust and gravel. #MCM pic.twitter.com/6nv0e55s7C

Sunspot AR2737 is rotating across the face of the Sun – just north of the equator; coronal loop activity associated with the sunspot is visible in both videos below. The northern coronal hole has diminished slightly from last week, whereas the southern hole remains open and large. Several small holes appear below the equator.

SpaceWeather.com says: “A southern hole in the sun’s atmosphere is spewing a stream of solar wind toward Earth. Estimated time of arrival: April 4th. Minor geomagnetic storms and Arctic auroras are possible when the gaseous material arrives.”

The solar wind — the Sun's outflow of particles and magnetic field — creates a bubble in space that stretches far past the orbit of Neptune. Beyond that bubble is interstellar space. Here are 5️⃣ things to know about the space between the stars. ? https://t.co/5XDi359nhT pic.twitter.com/2tAO2hUxFr

This fast-spinning asteroid, with a tail longer than a half-million-miles, is shedding dust into space. Watching an asteroid become unglued gives astronomers the chance to study the makeup of these space rocks without sending a spacecraft to sample them: https://t.co/F6qKhOodH2 pic.twitter.com/F8uewgAU96

A fireball in the sky could be seen in this video from Crawfordville, Florida, on Saturday night. Did you see anything?☄️Video and permission from Daniel Ppool. #SKYWARN #meteor #nightsky #SaturdayNight pic.twitter.com/si8BEGjtUe

Boy, have I got some weekend reading for you … check out the OSIRIS-REx team's Bennu research that @nature just released in a special collection: https://t.co/8iy4kCBB0s pic.twitter.com/N2wzj8qXdA

Want a Bennu of your very own? Have access to a 3D printer?

The latest shape model — made with data derived from my first three months at the asteroid — is now available!

Global average sea level is now rising at a rate of 3.3 mm (0.13 inches) per year. That's 1,190 cubic kilometers (about 286 cubic miles) per year in water volume, or about one Lake Erie every five months. https://t.co/f8Cpqopsft