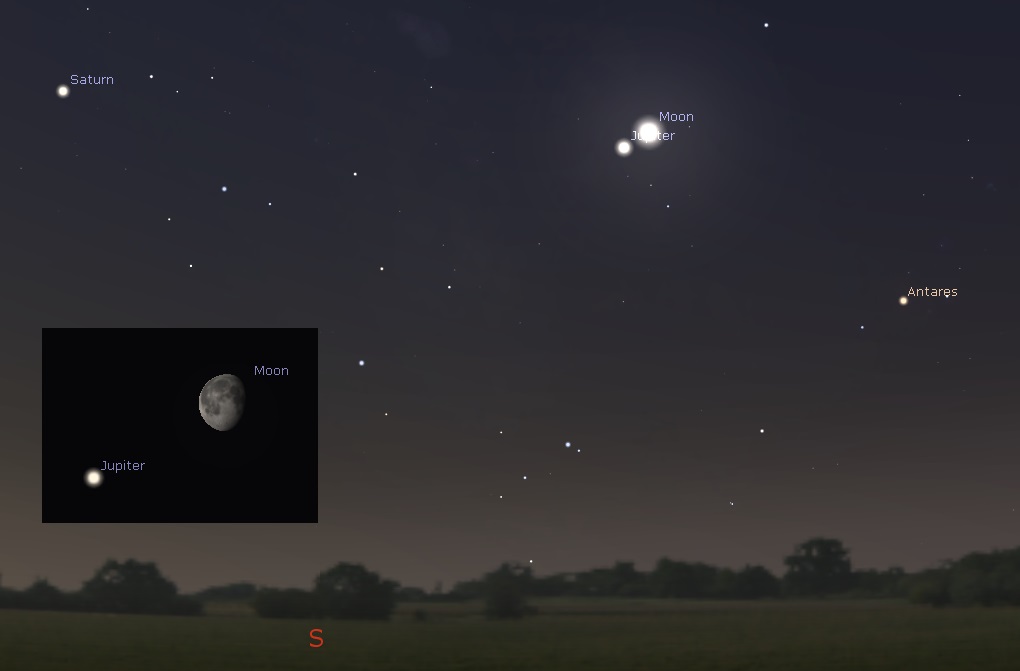 Did you get a chance to see the conjunction of Jupiter and the Moon the the predawn sky this morning? I did as I drove my wife to work.

The Moon was in conjunction with Jupiter high in the southern sky on Apr. 23rd; Saturn and the star Antares appear on either side. Credit: Stellarium / Bob Trembley.

Mercury and Venus appear very low in the eastern sky just before sunrise all week – seeing Mercury may be a challenge.

Mercury and Venus appear very low in the eastern sky just before sunrise at 6:00 AM on Apr. 24th. Credit: Stellarium / Bob Trembley.

There will be a conjunction of the Moon and Saturn in the eastern predawn sky on April 25th; Jupiter and the star Antares continue to appear in the southwest. 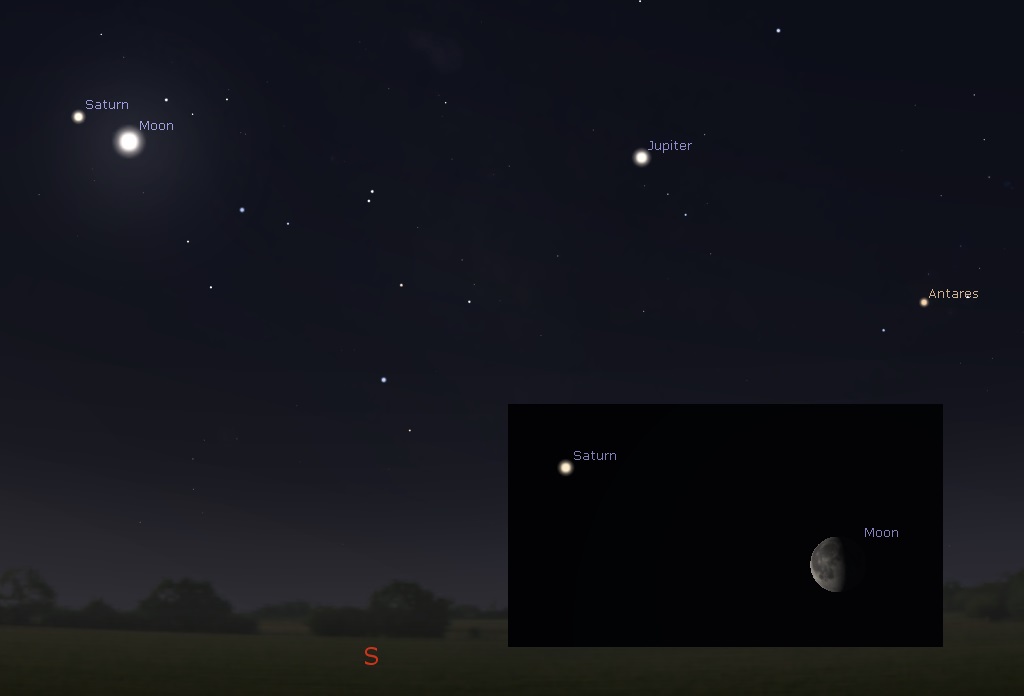 The Moon will be in conjunction with Saturn high in the southern sky on Apr. 25th; Jupiter and the star Antares appear to their west. Credit: Stellarium / Bob Trembley.

Mars continues to move away from the Pleiades – which is very close to setting with the dusk; the constellations Orion and Taurus set shortly after sunset. Over the last several months, Earth’s orbit has taken it away from Mars (see solar system images below). 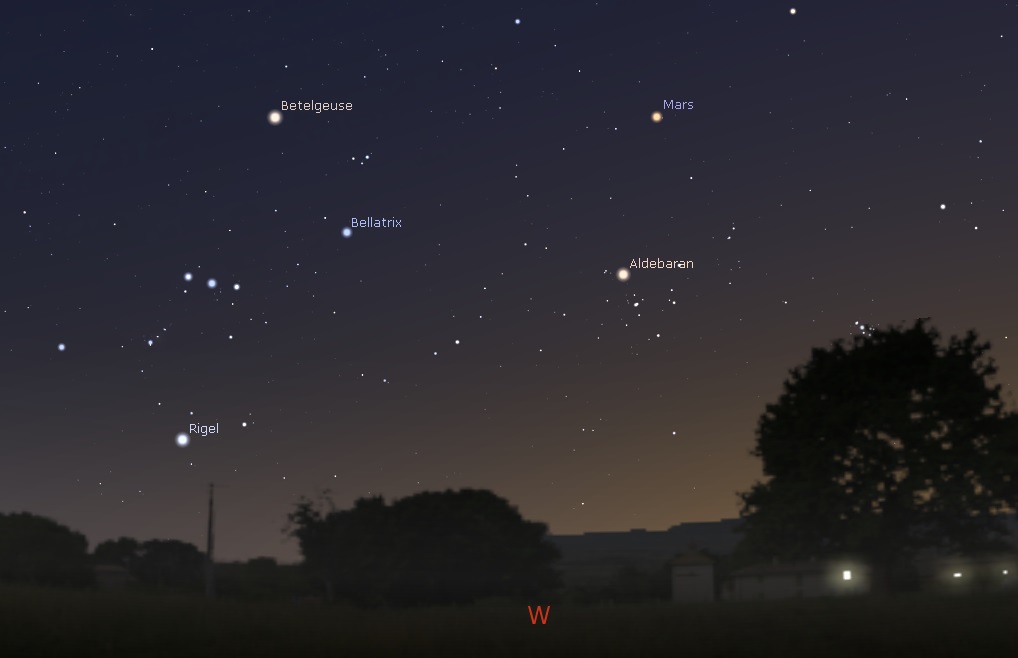 Mars and the constellations Orion and Taurus in the western sky after sunset on Apr. 24th. Credit: Stellarium / Bob Trembley. 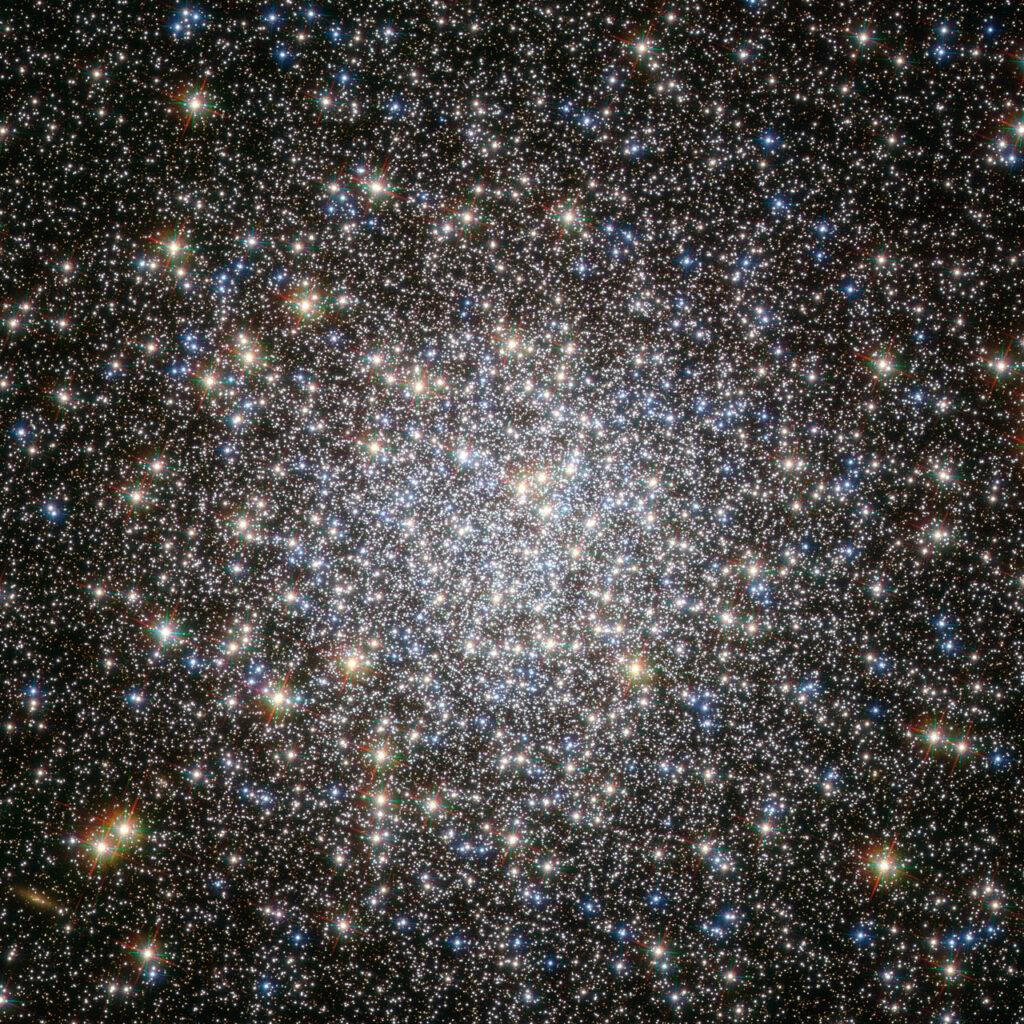 The globular cluster Messier 5, shown here in this NASA/ESA Hubble Space Telescope image, is one of the oldest belonging to the Milky Way. The majority of its stars formed more than 12 billion years ago, but there are some unexpected newcomers on the scene, adding some vitality to this aging population. Stars in globular clusters form in the same stellar nursery and grow old together. The most massive stars age quickly, exhausting their fuel supply in less than a million years, and end their lives in spectacular supernovae explosions. This process should have left the ancient cluster Messier 5 with only old, low-mass stars, which, as they have aged and cooled, have become red giants, while the oldest stars have evolved even further into blue horizontal branch stars. Yet astronomers have spotted many young, blue stars in this cluster, hiding amongst the much more luminous ancient stars. Astronomers think that these laggard youngsters, called blue stragglers, were created either by stellar collisions or by the transfer of mass between binary stars. Such events are easy to imagine in densely populated globular clusters, in which up to a few million stars are tightly packed together. Messier 5 lies at a distance of about 25 000 light-years in the constellation of Serpens (The Snake). This image was taken with Wide Field Channel of Hubble’s Advanced Camera for Surveys. The picture was created from images taken through a blue filter (F435W, coloured blue), a red filter (F625W, coloured green) and a near-infrared filter (F814W, coloured red). The total exposure times per filter were 750 s, 400 s and 567 s, respectively. The field of view is about 2.6 arcminutes across. Credit: ESA/Hubble & NASA

Messier 5 or M5 (also designated NGC 5904) is a globular cluster in the constellation Serpens. Under extremely good conditions, M5 is just visible to the naked eye as a faint “star” near the star 5 Serpentis. Binoculars or small telescopes will identify the object as non-stellar while larger telescopes will show some individual stars, of which the brightest are of apparent magnitude 12.2. The cluster was discovered by Gottfried Kirch in 1702. – Paraphrased from Wikipedia 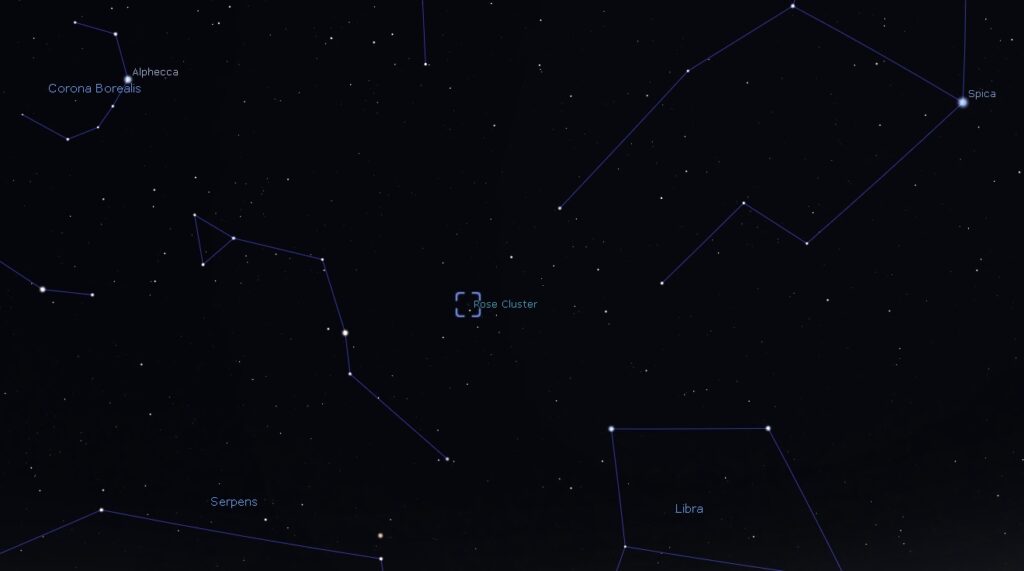 The third quarter Moon occurs on Apr. 25th, rising around midnight, and visible to the south after sunrise.

After the 25th, the Moon will be a waning crescent, visible low to the east before sunrise.

"We came all this way to explore the Moon, and the most important thing is that we discovered the Earth." – Bill Anders, Apollo 8

The Sun has been spot-free for 2 days. AR2738 has rotated out of view, but you can still see coronal loops associated with it on the Sun’s limb; a coronal mass ejection blew off the Sun from that region in the first second of the videos below.

Coronal holes appear at both poles, and a snake-like coronal hole appear below the equator. SpaceWeather.com says: “A southern hole in the sun’s atmosphere is spewing a stream of solar wind toward Earth. Minor geomagnetic storms are possible when the gaseous material arrives on April 24-25. NASA’s STEREO-A spacecraft has already encountered the solar wind stream and measured its velocity: Between 500 and 600 km/s. Polar auroras may be seen despite waning full moonlight.”

Several long-lived prominences over the last couple days; note the large amount of activity at the start of the video.

#OTD in 2007, @NASA released the first 3D images of the sun acquired by the STEREO spacecraft, which could see the giant orb in different wavelengths. It helped scientists see the sun’s features. #science #space pic.twitter.com/4SNsozGskV

This month saw the first ever #asteroid impact experiment, by Japan's @haya2e_jaxa spacecraft. Patrick Michel, a scientist involved with this and our proposed #HeraMission, explains a much bigger impact planned for the coming decade: https://t.co/18aJtXe67a #PlanetaryDefense pic.twitter.com/YxZ8Fulfbq

2 #FIREBALLS CAUGHT LAST NIGHT
– one over #Germany, one over #Maryland –
More info to come. pic.twitter.com/TLlfK7PfGq

Over the next 7 weeks, I'll be making north/south slews on 7 different stations around Bennu in order to get observations from different sun illumination conditions.

This video shows the descent of the SCI (Small Carry-on Impactor) made from images captured at 2 second intervals just after separation from Hayabusa2 by the onboard TIR (Thermal Infrared Camera). In the background, you can see the surface of Ryugu 500m away. pic.twitter.com/O5niPDb2XI

“Call from Mars” competition extended to 20 May! It's not too late to send your voice to #Mars onboard our #ExoMars surface science platform.

⏺?Original story & how to enter: https://t.co/kZHBLS4kfq

Monitor our planet’s vital signs, such as sea level height, atmospheric carbon dioxide concentration and Antarctic ozone. Trace the movement of water around the globe using the gravity map from NASA’s GRACE satellites. Spot volcanic eruptions and forest fires using the carbon monoxide vital sign. Check out the hottest and coldest locations on Earth with the global surface temperature map.

With the “Latest Events” feature, you can explore geo-located satellite images of recent Earth events, including algal blooms, super storms and wildfires.

For #EarthDay, we're asking everyone a simple question: How do you #PictureEarth?

At NASA, we #PictureEarth with satellites and instruments that study the atmosphere, the ocean and the land of our living, breathing planet 24/7. ? ?️

Here's an animated gif of FFIs from the first 8 TESS sectors, centered on the ecliptic pole, using swarp. Shows the continuous coverage in camera 4 nicely. pic.twitter.com/bU8WmvQKmV

Ready for a weekend getaway?

How about a guided journey through the amazing TRAPPIST-1 system, home of 7 Earth-size exoplanets orbiting a star? just a little larger than Jupiter.@NASA's #Exoplanet Excursions VR is available for download now! https://t.co/mmiyoHmgtK pic.twitter.com/unEtO0PwGq 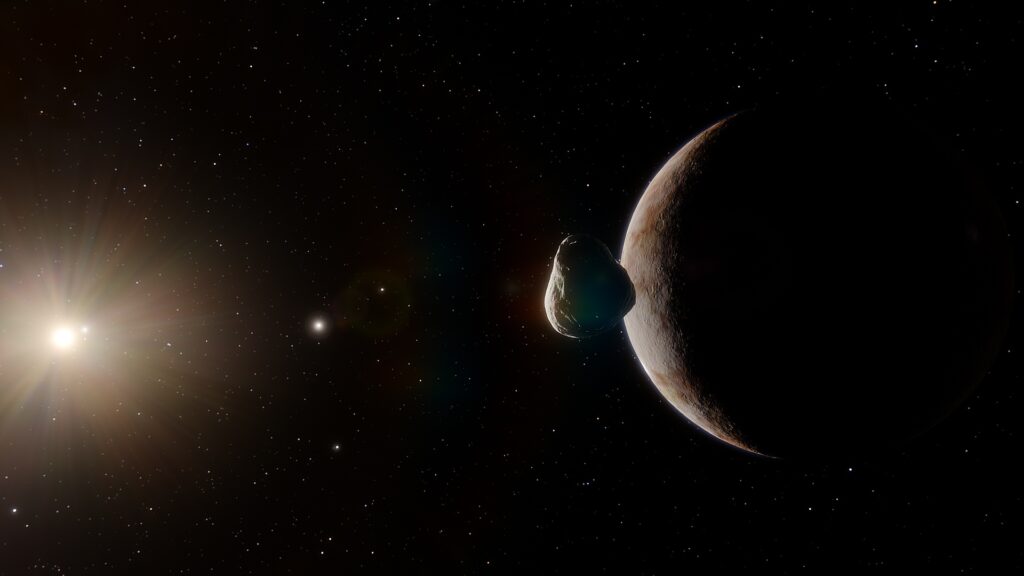