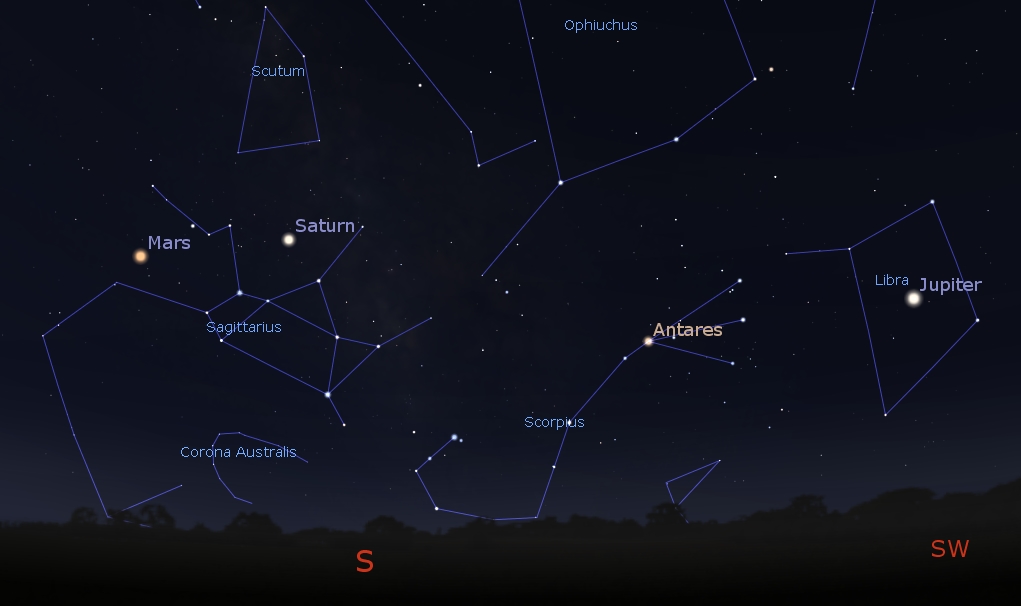 Mars, Saturn, Antares and Jupiter are splashed across the southern predawn sky.

Over the next year and a half, Jupiter will slowly make its way closer to Saturn; From Earth’s perspective, Jupiter and Saturn will appear near each other in the sky for the next several years.

Southern sky at 5:30 AM, Apr. 17, 2018, showing path Jupiter will take over the next several months. Credit: Stellarium / Bob Trembley. 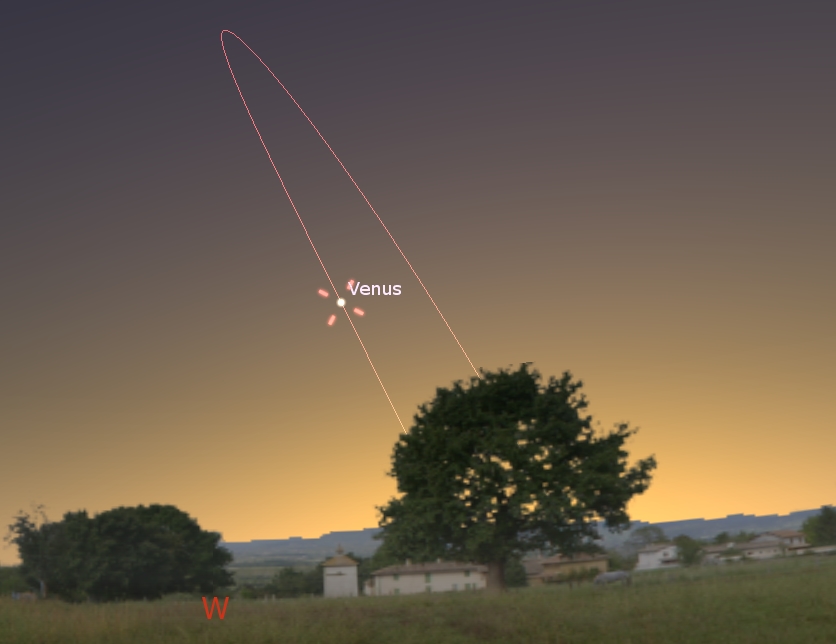 The constellation Gemini can be seen above Orion, which is setting in the west shortly after sunset. 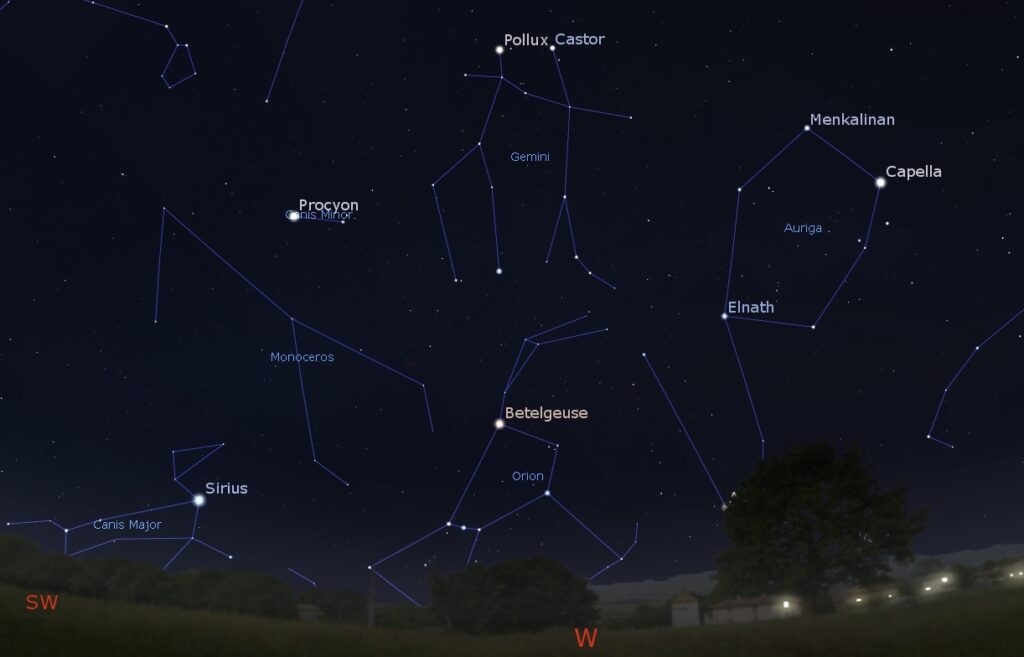 The Moon will be near the star Regulus in Leo on April 25th around midnight. 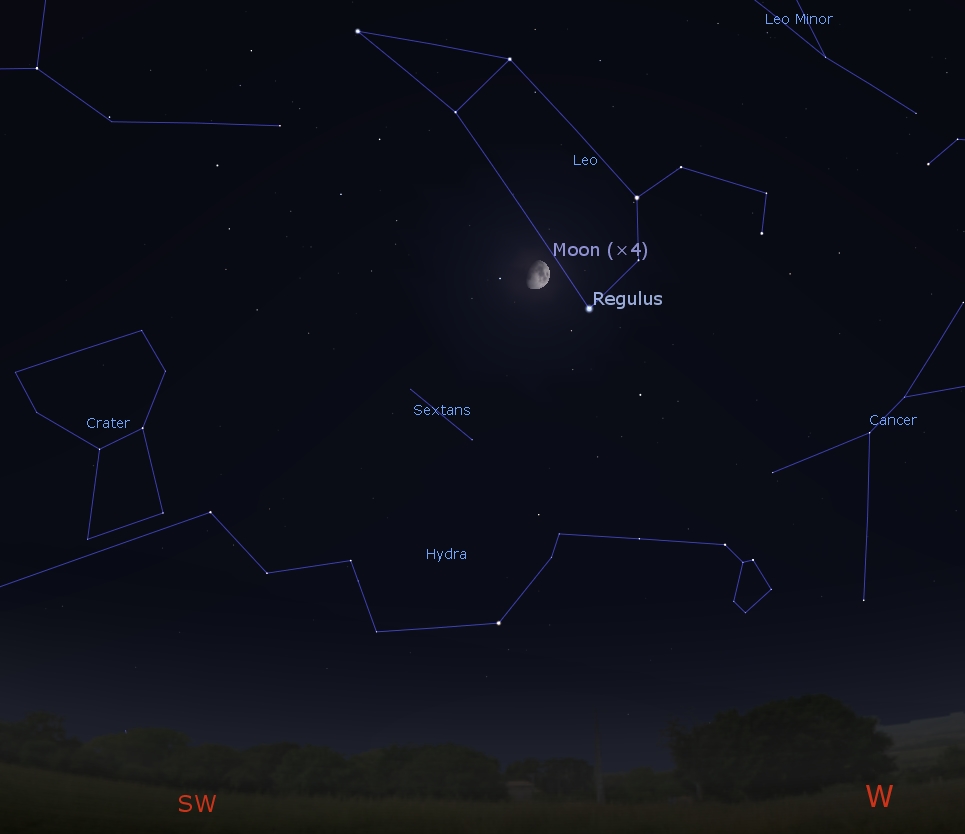 The Moon is a waxing gibbous heading towards full on the 30th – the next few days will be great for doing some sidewalk astronomy!

While I was at the NASA website where I get these Moon images, there was a sidebar item highlighting the new and improved NASA’s Lunar Reconnaissance Orbiter (LRO) Tour of the Moon video. I’ve shown an older version of this video many times as part of my Moon lecture – this version is spectacular! Teachers take note!

The Sun has a medium-sized sunspot, which has been rotating towards the Earth for the last several days.

This sunspot appears unremarkable, until you see it in extreme ultraviolet! There is an enormous amount of coronal activity, and some beautiful coronal loops associated with this sunspot. SpaceWeather.com says: “Sunspot AR2706 has a stable magnetic field that poses no threat for strong solar flares.”

There are coronal holes at both of the Sun’s poles; the solar wind speed is 350 km/sec, with a density of 5.0 protons/cm3. SpaceWeather.com says: “A stream of solar wind is approaching Earth and it could graze our planet’s magnetic field on April 26th. The gaseous material is flowing from a northern hole in the sun’s atmosphere. The stream won’t hit our planet head on, but sometimes grazing impacts produce interesting effects–for instance, making Earth’s magnetosphere ring like a bell.”

The Sun’s chromosphere had a several small prominences over the last couple days – what’s really interesting is how the activity of sunspot AR2706 looks totally different at the frequency shown in the image below.

The Lyrids Meteor shower peaked on the evening of April 21-22, but runs until April 25 – you might still be able to catch a few meteors from this shower. 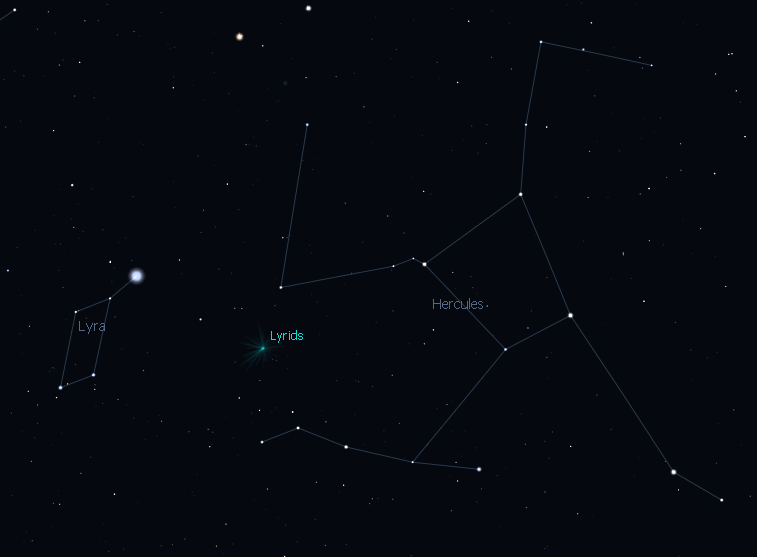 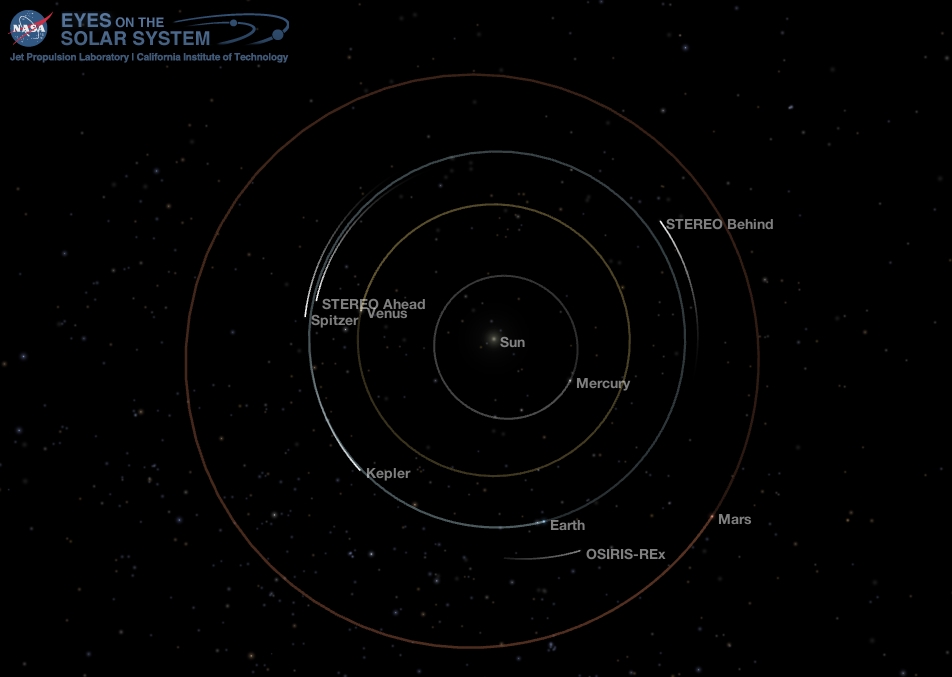 Position of the planets in the inner solar system, Apr. 24, 2018. Credit: NASA Eyes on the Solar System / Bob Trembley. 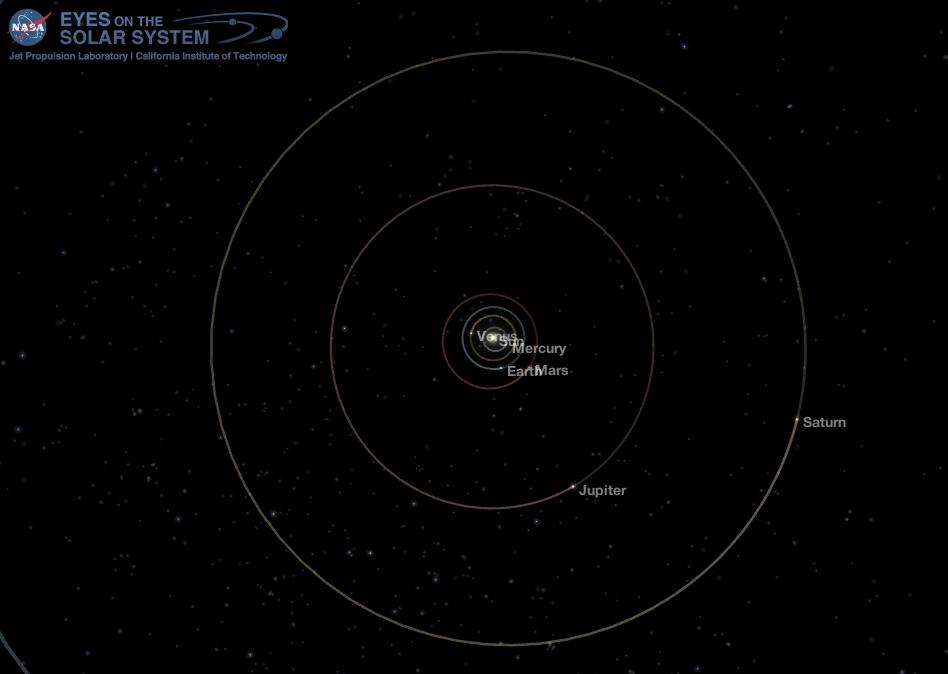 Position of the planets in the middle solar system, Apr. 24, 2018. Credit: NASA Eyes on the Solar System / Bob Trembley. 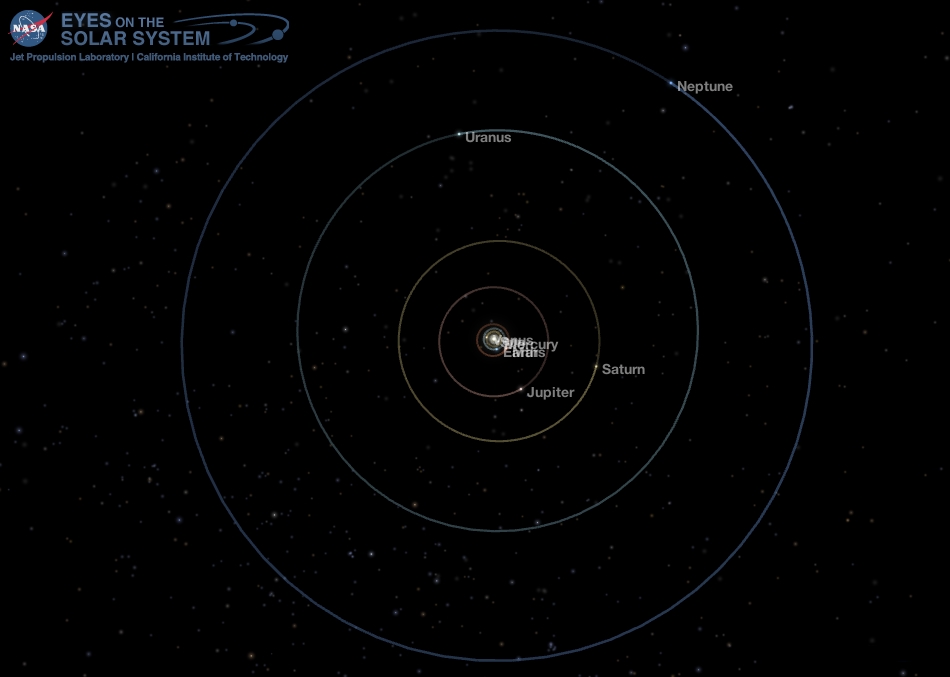 Position of the planets in the outer solar system, Apr. 24, 2018. Credit: NASA Eyes on the Solar System / Bob Trembley. 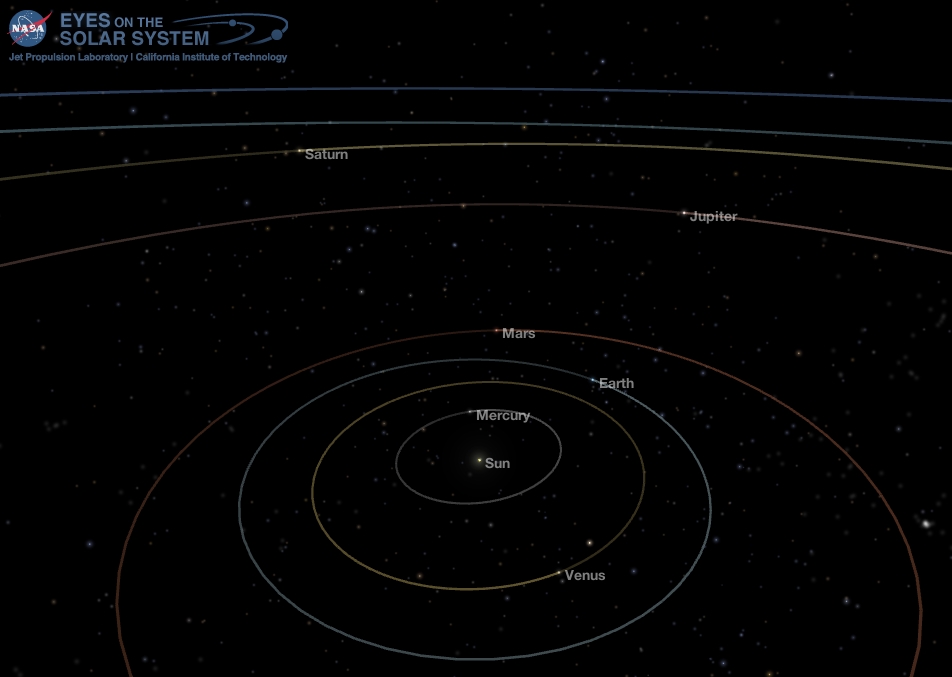 Position of the planets in the inner solar system, Apr. 24, 2018 – side view. Credit: NASA Eyes on the Solar System / Bob Trembley.