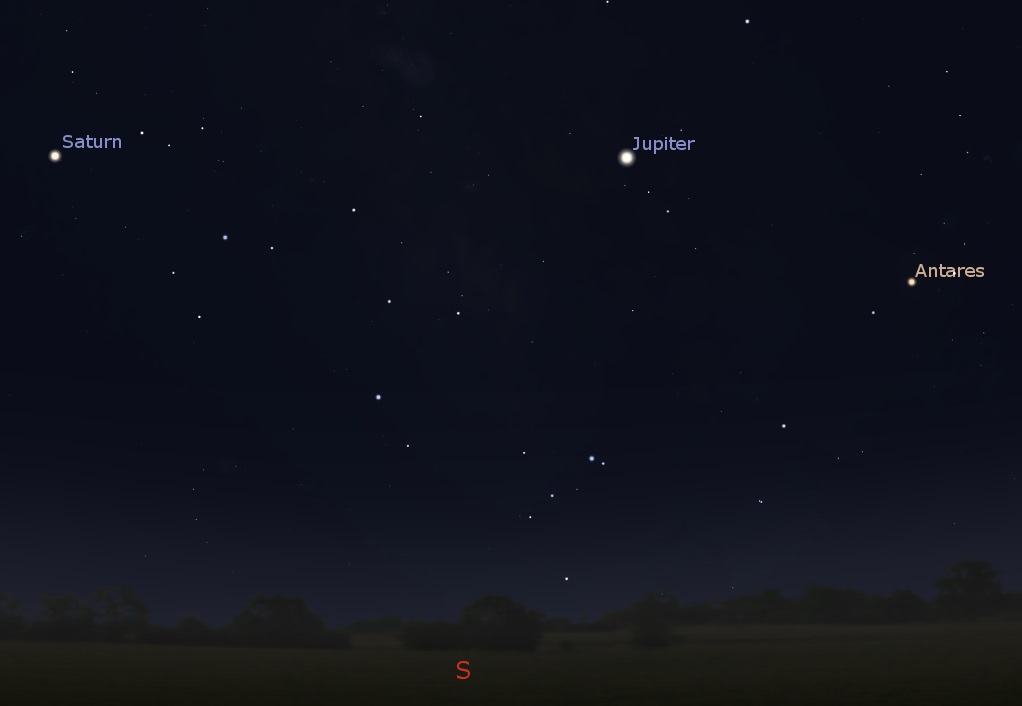 Mercury, Venus appear very low in the eastern sky just before sunrise – if seeing Mercury was a challenge last week, it will be even harder this week. The waning crescent Moon joins the two planets until May 3rd.

Saturn, Jupiter and the star Antares appear southern sky early in the morning. In this image, I have the light pollution set to high – this is typically what I can see from a close suburb to Detroit.

This is the same patch of sky seen from a dark sky site. 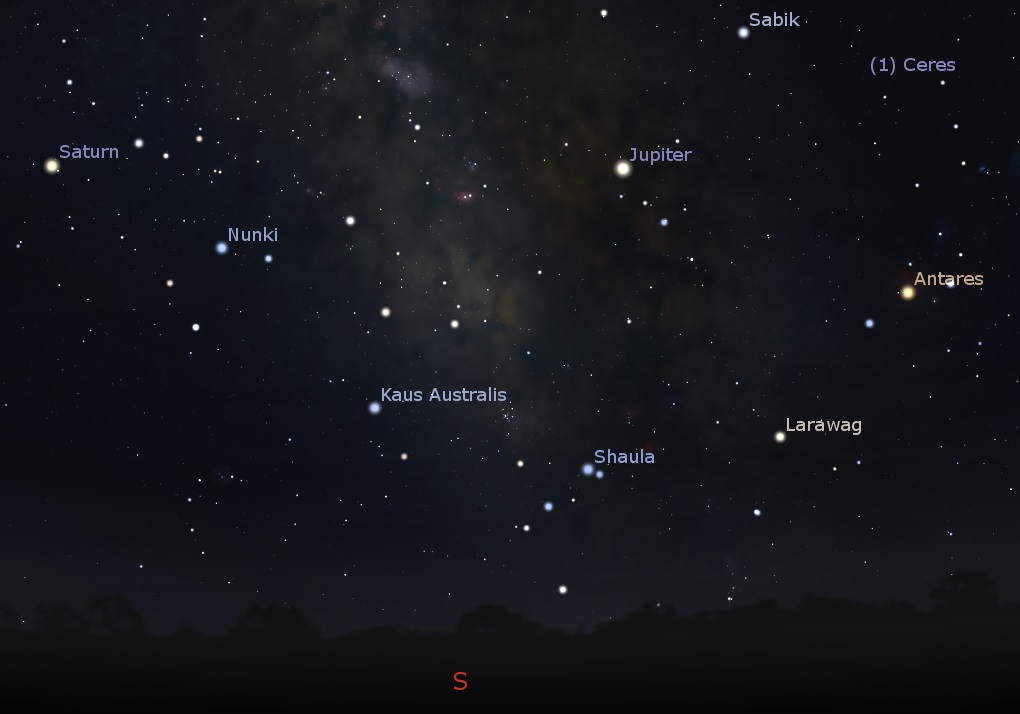 The southern sky on Apr. 30th – with light pollution levels are set to none. Credit: Stellarium / Bob Trembley.

Mars and the star Betelgeuse are low on the horizon after sunset; the winter constellations will soon be gone. 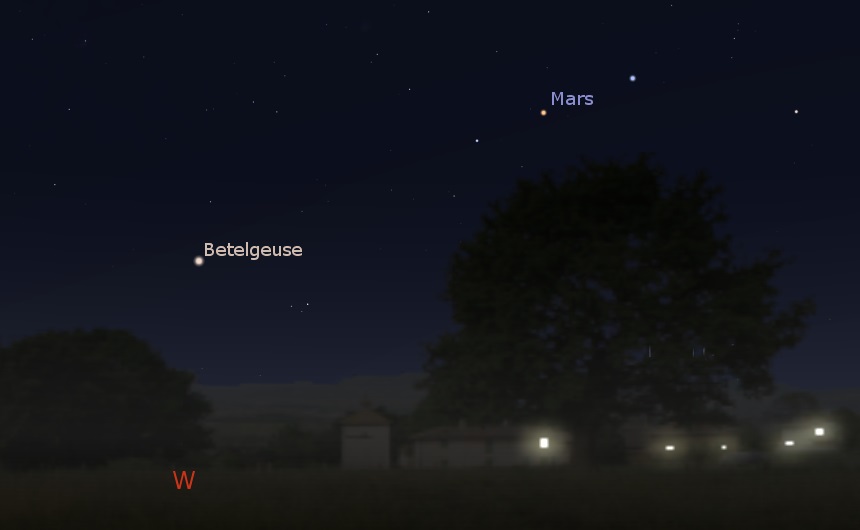 Mars and the star Betelgeuse in the constellations Orion low in the western sky after sunset on May 6th. Credit: Stellarium / Bob Trembley. 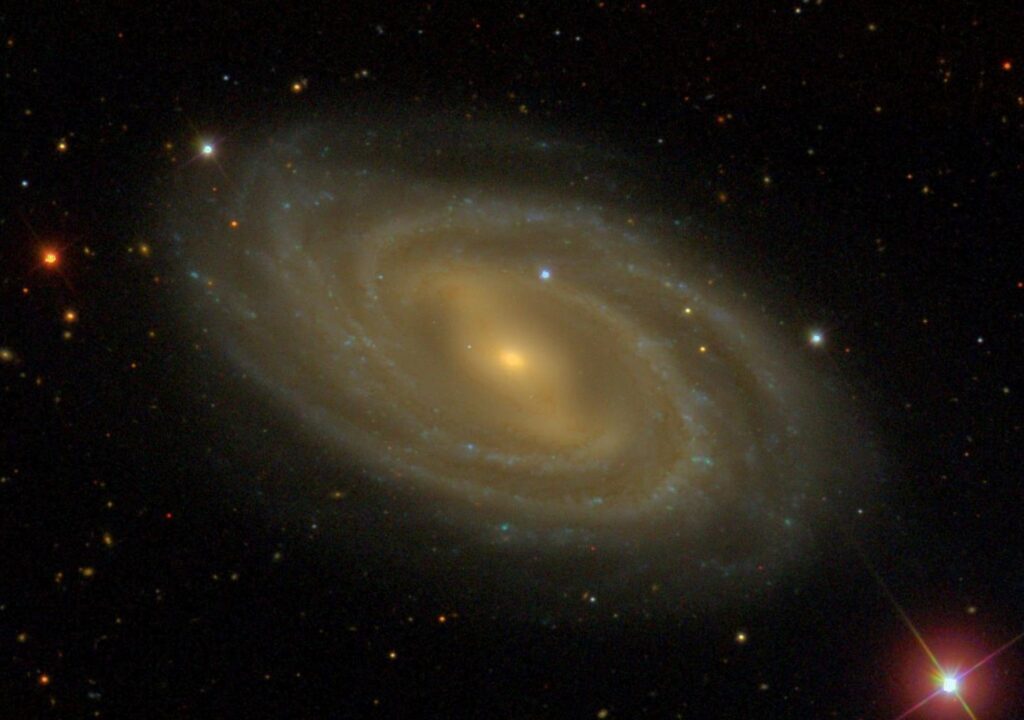 Messier 109 (also known as NGC 3992) is a barred spiral galaxy exhibiting a weak inner ring structure around the central bar approximately 83.5 ± 24 million light-years[3]away in the constellation Ursa Major. M109 can be seen southeast of the star Phecda (γ UMa). – Wikipedia 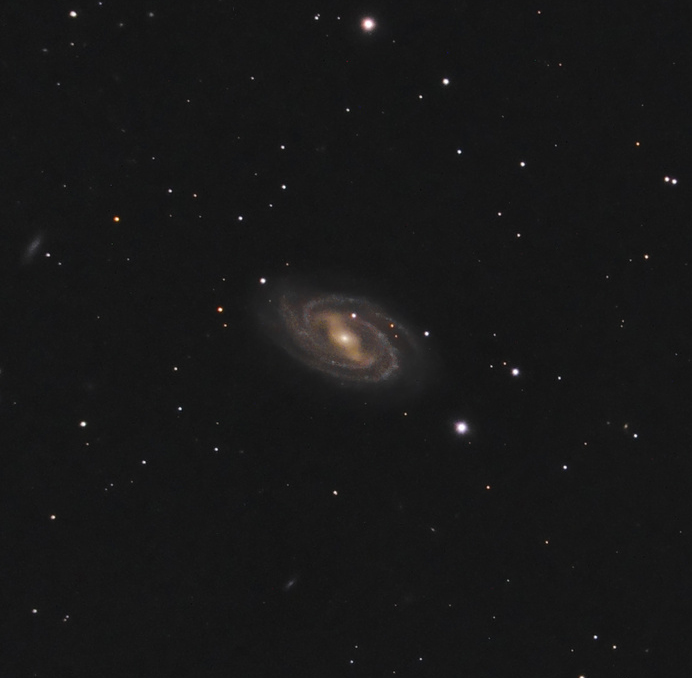 Where did the name “Vacuum Cleaner Galaxy” come from? It’s not official; Stellarium refers to M-109 with that name, so I searched for it – I found it mentioned in an archived comment section on M-109 on Wikipedia.

The new Moon occurs on May 4th.

After May 4th, the Moon will be a waxing crescent, visible toward the southwest in early evening.

Blagg crater is named after Mary Adela Blagg (1858-1944). A Moon mapper extraordinaire, Blagg standardized the names of lunar features and became one of the first 5 women inducted as a fellow into the Royal Astronomical Society. Rock star?. #WomenInSTEM https://t.co/H6g34q8Rr5 pic.twitter.com/i6Nb9JLNya

The Sun has been spot-free for 9 days; AR2738, if it still exists, it is on the other side of the Sun. Coronal holes are open at both poles, and a rather large coronal hole is in the middle of the Sun – just below the equator. SpaceWeather.com says: “A large hole in the sun’s atmosphere is facing Earth and spewing a stream of solar wind in our direction. Estimated time of arrival: May 2nd. Minor geomagnetic storms are possible when the gaseous material arrives.”

The eastern limb of the Sun has been hogging most of the prominences for the last few days.

The quadruplet MMS spacecraft have finished 1000 laps ? around Earth — which adds up to 163 million miles flown! ? Their latest adventure took them beyond Earth's bubble of magnetic protection ? and into the flowing solar wind. ☀️? https://t.co/nuq1vpfBco pic.twitter.com/3EdZuZVjvZ

#ICYMI Do you have access to a 1-m telescope or larger? Then register to the @ESAGaia #asteroid alerts ?https://t.co/KSQS9CniD3 to perform follow-up observations & help improve asteroid orbit determination or even discover new ones!
?? https://t.co/VTyHcDqGC1 #PlanetaryDefense pic.twitter.com/zDaZcnPkqm

The Eta-Aquariid Meteor Shower is active

#CitizenScience collaboration ??? : I send home raw pictures of Jupiter, and talented people around the world turn them into everything from detailed scientific imagery to beautiful works of art. Full video: https://t.co/YIwpDufF6Q pic.twitter.com/ogkYKdw7HO

Look at these rocks on top of another rock. https://t.co/BJwDZROU06 pic.twitter.com/fm2LeU0A6T

Martians, we did it! Your votes helped me win a #Webby People’s Voice award ?. Thank you for the love ❤️ and for supporting the work I’m doing on #Mars. Read all about @NASA’s Webby award wins: https://t.co/3hI3CiOvzQ pic.twitter.com/zO499yZnh3

On April 29, 1999, NASA Earth Observatory (EO) started publishing science stories and imagery on the Web. So much has changed in those 20 years… https://t.co/OJ1iFx6WZC #NASAEO20 #EarthDayEveryDay #OTD ⏳ pic.twitter.com/zVpcyK4lzA

Astronomers discover the first known exoplanet to survive a catastrophic collision with another planet. https://t.co/DNXHXLEliL pic.twitter.com/WhRPslrRXH

Nicknamed the Cheshire Cat galaxy group, this is the most popular example of gravitational lensing https://t.co/7lT87qbmaW pic.twitter.com/rhwhX08bPo