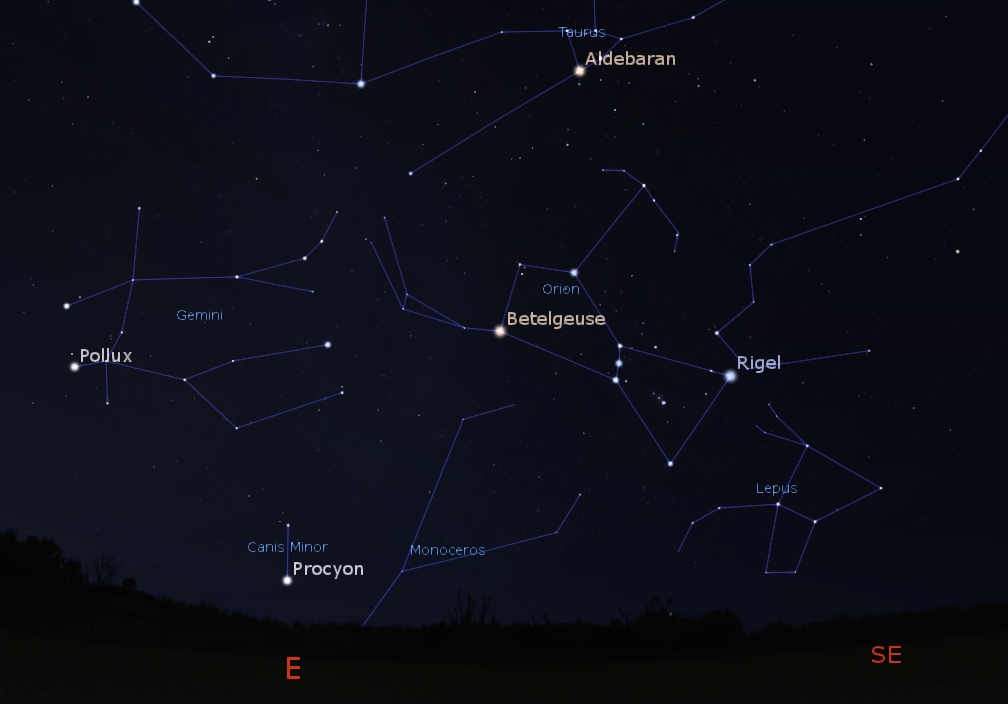 The constellations Orion, Gemini and Taurus rise earlier each morning in the eastern predawn sky. When I see this, I cannot help but think “Winter is coming.”

The constellation Orion in the predawn sky to the east on Aug. 21, 2018. Credit: Stellarium / Bob Trembley.

The southern sky continues to have a beautiful splash of planets, and will make for good observing this week; deep-sky objects may be washed-out by the nearly full Moon, which will be visible almost all night this week. 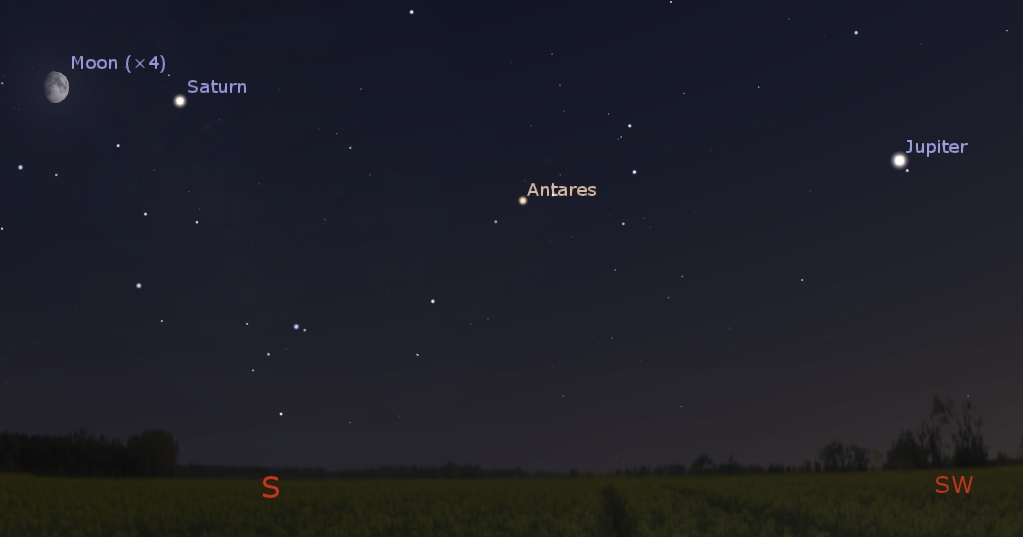 Mars and Saturn are high in the southern sky at midnight, the Moon joining them between August 22-24. 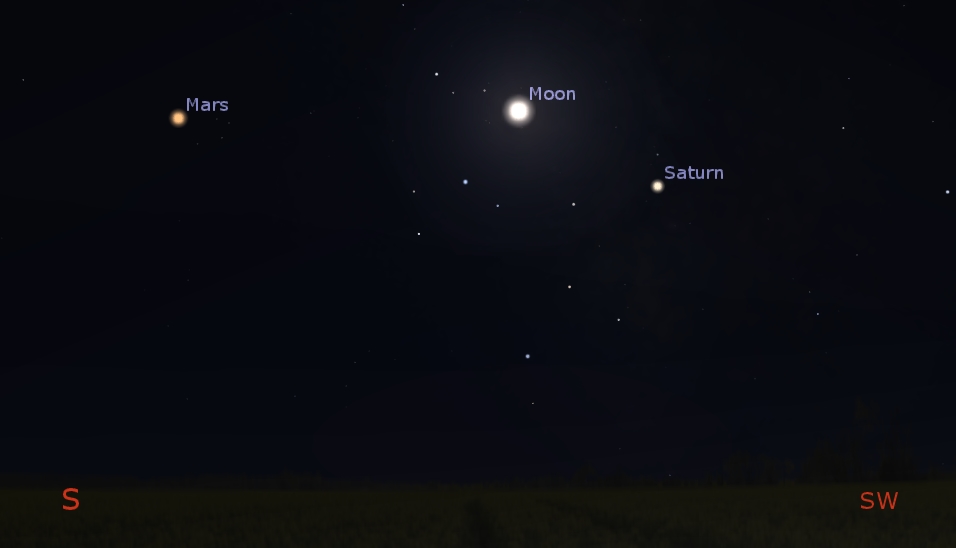 The Moon, Mars and Saturn in the southern sky at midnight, Aug. 22 2018. Credit: Stellarium / Bob Trembley.

Jupiter moves slowly westward towards Venus, as Venus appears lower in the southwestern sky each evening. 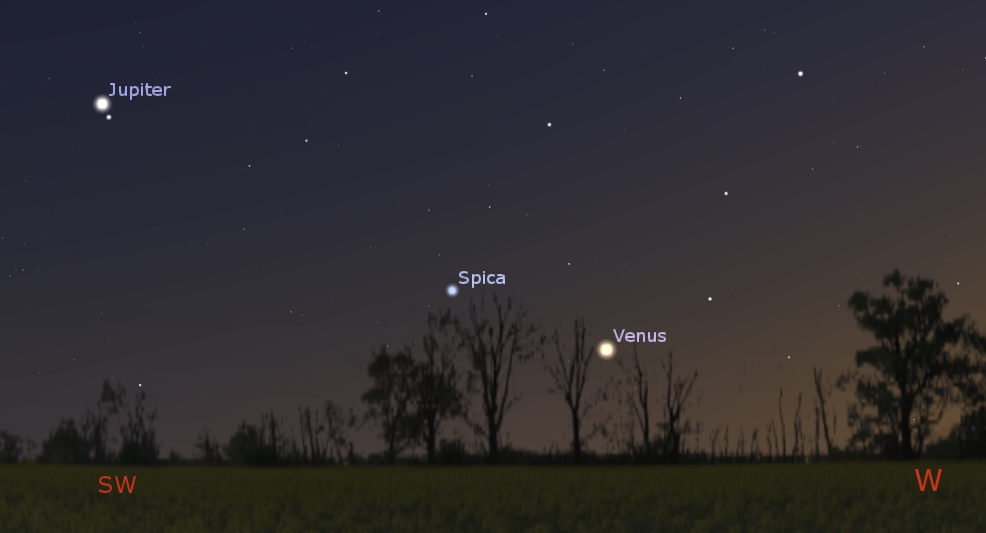 From Cape Town, South Africa the splash of planets that appear on my southern horizon are nearly directly overhead at 8:00 PM. 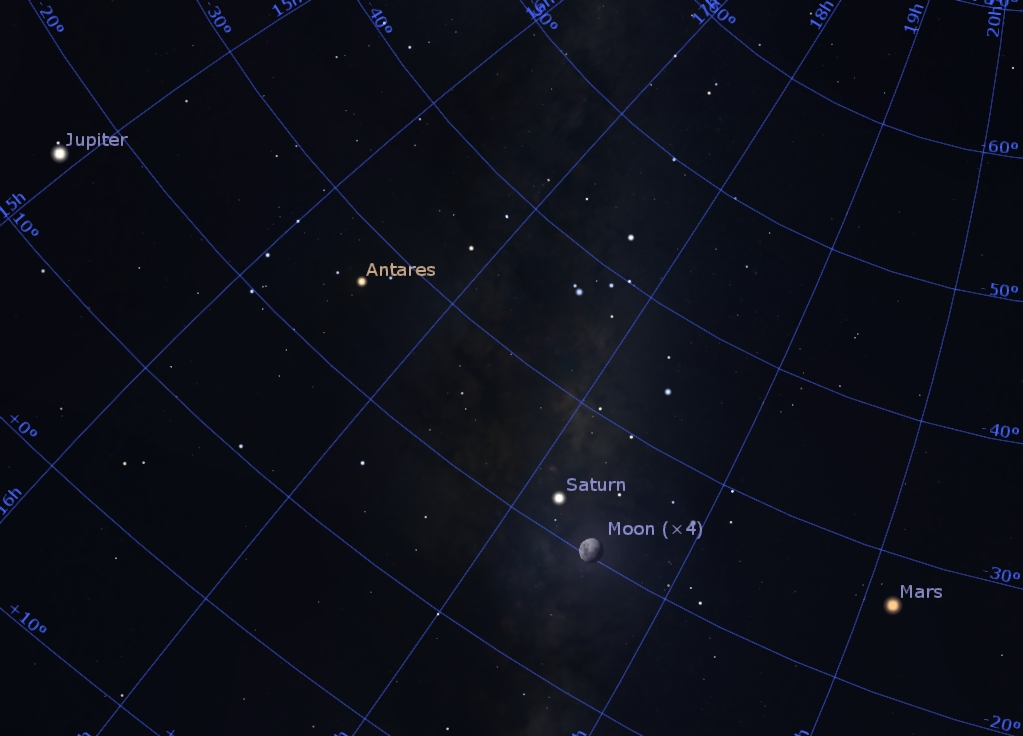 The Moon is a waxing gibbous heading towards full on August 26th. Afterwards the Moon will be a waning gibbous.

The Moon may or may not be a good observing target this week – the fires across the west have spread haze across the U.S. and Canada; if you can see the Moon, it may have an odd orange-red hue to it.

From Wikipedia:
“Mu Cephei (μ Cep, μ Cephei), also known as Herschel’s Garnet Star, is a red supergiant star in the constellation Cepheus. It appears garnet red and is located at the edge of the IC 1396 nebula. Since 1943, the spectrum of this star has served as the M2 Ia standard by which other stars are classified.

Mu Cephei is visually nearly 100,000 times brighter than the Sun, with an absolute visible magnitude of Mv = −7.6. Summing radiation at all wavelengths gives a luminosity of around 283,000 L☉ (bolometric magnitude −8.8), making it one of the most luminous red supergiants in the Milky Way. It is also one of the largest known stars with an estimated radius over 1,000 times that of the sun (R☉), and were it placed in the Sun’s position it would reach between the orbit of Jupiter and Saturn.” 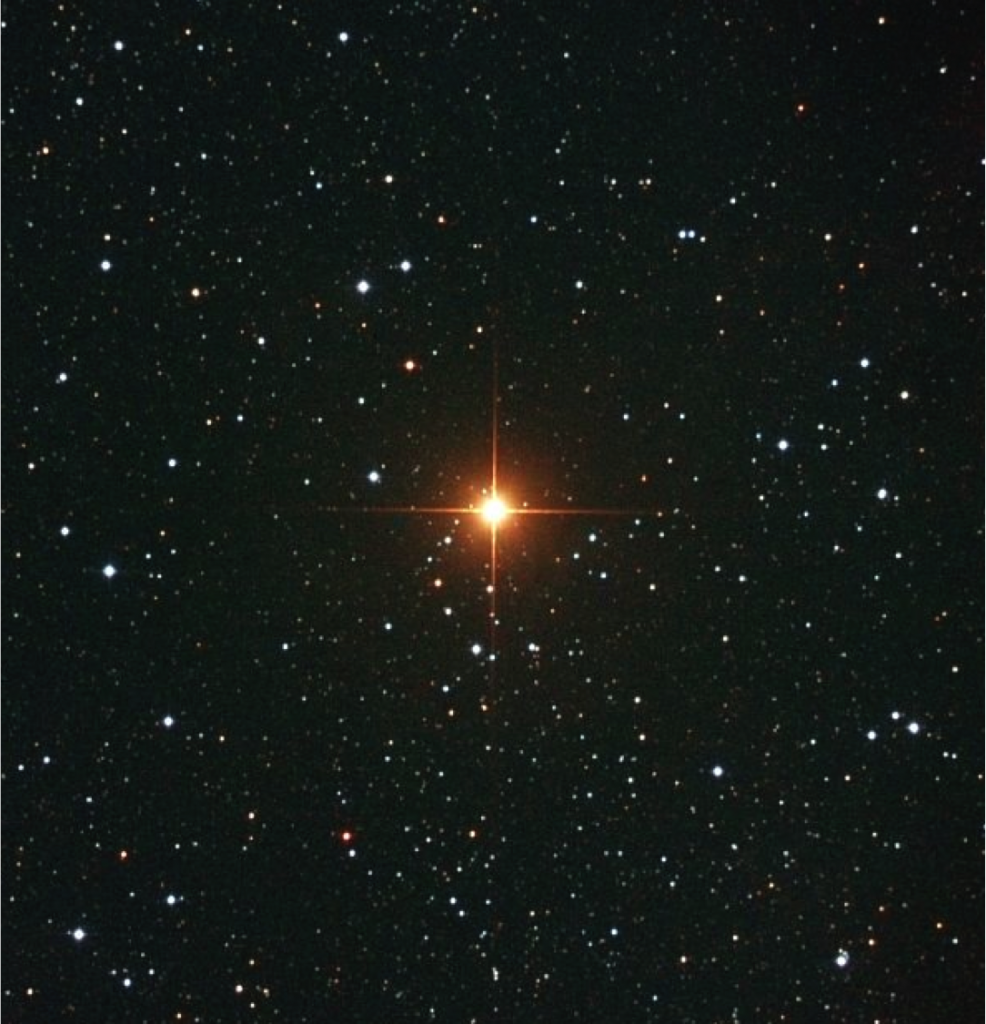 I saw the Garnet Star from the Warren Astronomical Society’s Stargate Observatory – it’s red color is quite striking! 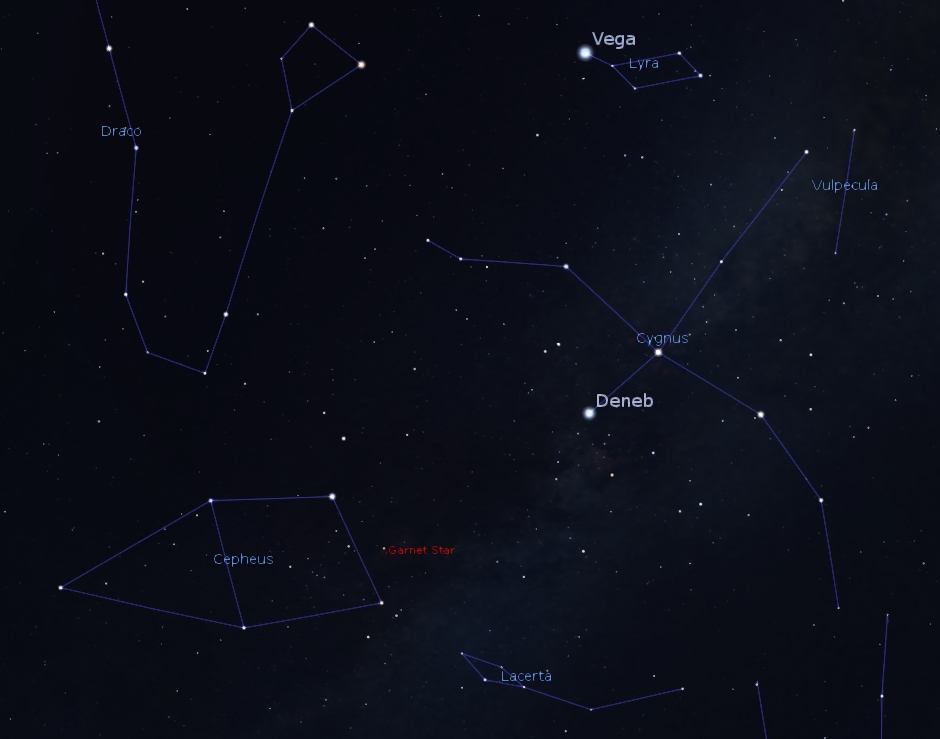 The Sun has a spot! A very small spot, hard to see spot, but enough to reset the “spotless days” counter. You can see sunspot AR2719’s location in the animation below – rotating towards the center of the Sun’s disk with a small amount of coronal loop activity.

The northern coronal hole has another long tendril stretching down past the equator. A hole has re-formed at the south pole, and there is a relatively large couple of holes near the equator. The solar wind speed is 603.9 km/sec, with a density of 4.3 protons/cm3. (That’s pretty darn fast!)

SpaceWeather.com says: “A stream of high-speed solar wind is buffeting Earth’s magnetic field, sparking bright auroras around the Arctic Circle. The gaseous material is flowing from a wide hole in the sun’s atmosphere–so wide that Earth could remain inside the stream for days to come. NOAA forecasters estimate 50% chance of polar geomagnetic unrest on Aug.21st.”

A couple medium-sized prominences appeared on the Sun for last couple days… I would have loved to show them on Sunday at the Michigan ComicCon, but the skies were uncooperative all weekend. AR2719 appears as the bright orange region on the left of the animation below.

While I was at SpaceWeather.com this morning, I saw a post there about “STEVEs” – they’re NOT aurora!

“Our results verify that this STEVE event is clearly distinct from the aurora borealis since it is characterized by the absence of particle precipitation,” say the researchers. “Interestingly, its skyglow could be generated by a new and fundamentally different mechanism in Earth’s ionosphere.”

I’ll post more about these after I’ve read a couple research papers: “On the Origin of STEVE: Particle Precipitation or Ionospheric Skyglow?” and “New science in plain sight: Citizen scientists lead to the discovery of optical structure in the upper atmosphere.” 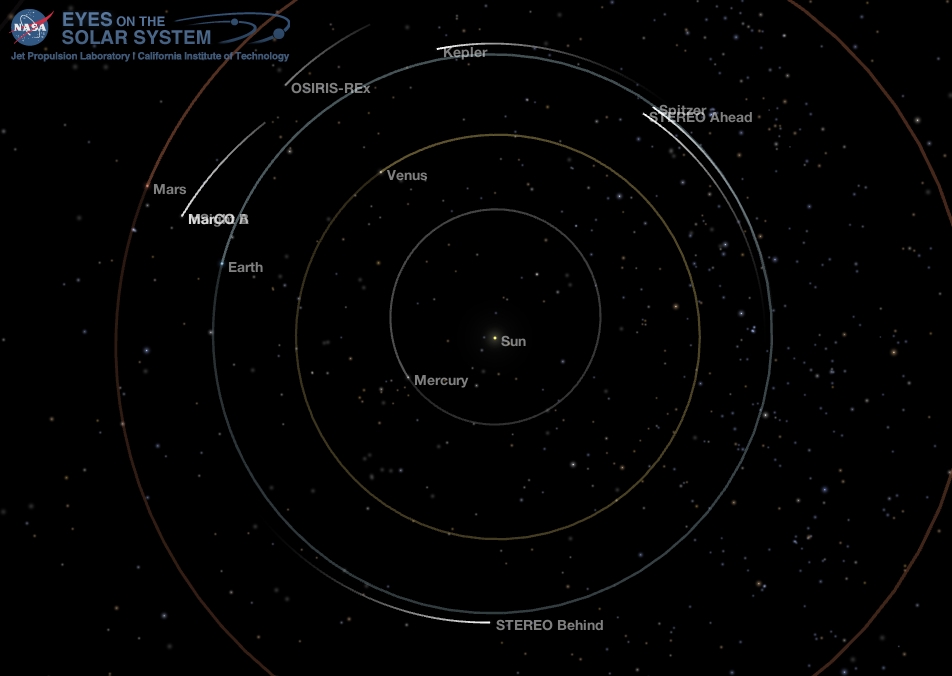 Position of the planets in the inner system, Aug 21 2018. Credit: NASA Eyes on the Solar System / Bob Trembley. 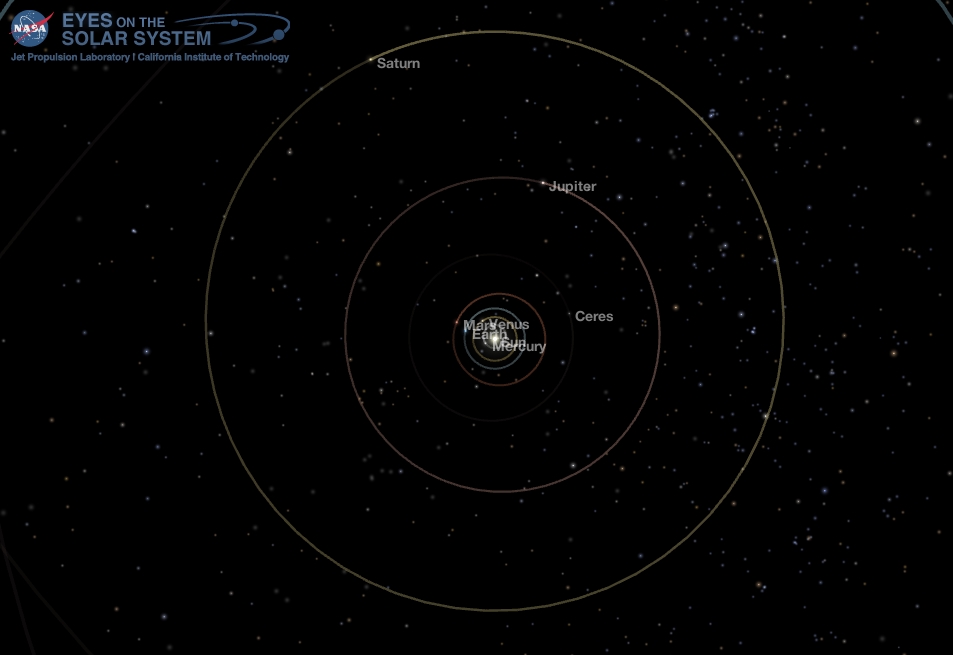 Position of the planets in the middle system, Aug 21 2018. Credit: NASA Eyes on the Solar System / Bob Trembley.

@NASA’s @NASA_TESS satellite has started collecting science data. Over the next two years, it will look at almost the entire sky, searching for evidence of new planets: https://t.co/afvUqnIu4s pic.twitter.com/H4z9tRRnYa

P.S. My cat Deimos was trying his hardest to make it difficult for me to write this post…