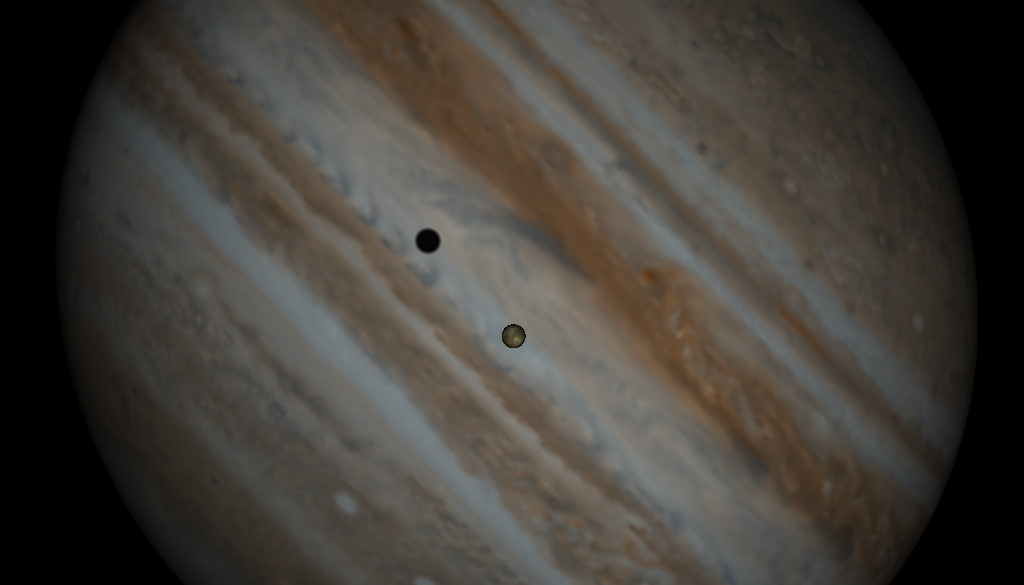 When working on today’s post, I was using Stellarium to create images, and almost as an afterthought I decided to zoom-in on Jupiter and see if I could spot any upcoming shadow transits – I found a LOT of them! The cover image for this week is one I thought was particularly cool – Jupiter’s moon Io and its shadow centered on the Jupiter’s face.

Have a look at my “Solar System” section, I show several different Jupiter moon and shadow transits. For most of these transits, you’ll need to be a night-owl tho – many happen in the wee hours of the morning.

Jupiter and Saturn continue to appear in the southern sky after sunset – they appear the highest near midnight. Note how far apart the two planets are now, after appearing right on top of each other last December.

The waning crescent Moon appears near the star Pollux in the eastern predawn sky on September 3rd. This would be an excellent time to look for earthshine on the Moon.

The Sun has two sunspots – one is a monster! SpaceWeather.com says: “AR2860 has a ‘beta-gamma’ magnetic field that harbors energy for strong M-class solar flares.”

The tornadoes have rotated around to the other side of the Sun’s face, and appear in the upper right side of the video. Spaceweather.com used the word seething to describe sunspot AR2860 – you can see very active coronal activity over the spot.

WOW! Seen in this frequency, AR2860 is blowing continuously! Something in the upper left is also vary active and rotating into view. There is quite a bit of prominence activity.

Position of the planets & several spacecraft in the inner solar system on August 31st:

I wondered what these shadow transits would look like from the moons themselves, so I fired up SpaceEngine, and created these images:

It was first observed on photographic plates in 1969 by Soviet astronomers Klim Ivanovych Churyumov and Svetlana Ivanovna Gerasimenko, after whom it is named. It will come to perihelion (closest approach to the Sun) on 2 November 2021.

Churyumov–Gerasimenko was the destination of the European Space Agency‘s Rosetta mission, launched on 2 March 2004. Rosetta rendezvoused with Churyumov–Gerasimenko on 6 August 2014 and entered orbit on 10 September 2014. Rosetta‘s lander, Philae, landed on the comet’s surface on 12 November 2014, becoming the first spacecraft to land on a comet nucleus. On 30 September 2016, the Rosetta spacecraft ended its mission by landing on the comet in its Ma’at region. – Wikipedia