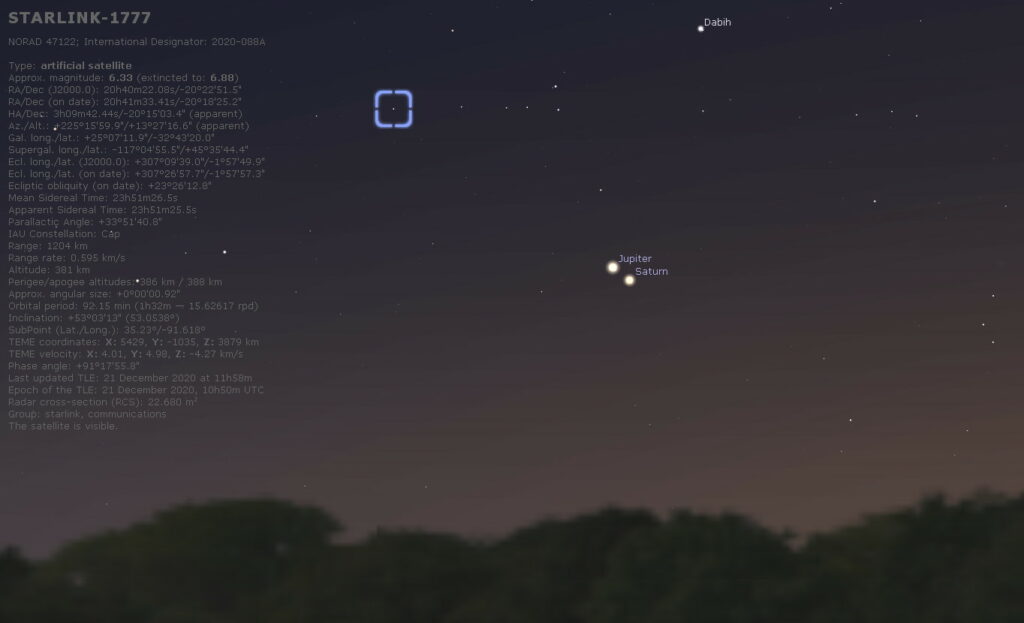 One of the more positive aspects of 2020 has been several successful sample return missions: the Japan Aerospace Exploration Agency (JAXA) HAYABUSA2 mission has successfully returned 5.4 grams of rocks and dust from the asteroid Ryugu, the China National Space Administration’s ChangE5 mission returned 1,731 grams of lunar regolith, and NASA’s OSIRIS-REx mission’s sample head was overflowing with material taken from the surface of asteroid Bennu. OSIRIS-REx is due back at Earth in 2023. These missions have me seriously excited, and I hope they are the beginning of a near-future filled with sample return missions!

After yesterday’s “Great Conjunction,” Jupiter and Saturn will move slightly away from each other every night – they’ll be great observing targets for that new telescope you got for Christmas! When I created this image, I saw a pattern of stars above Jupiter and Saturn that I did not recognize – I clicked on one and found it was a string of #Starlink satellites.

Jupiter and Saturn appear in the southwestern sky at dusk. This image is from Dec 25th at 6:03 PM – several Starlink satellites are visible high in the sky. Credit: Bob Trembley / Stellarium.

Mars, Uranus, the Pleiades star cluster and the bright star Aldebaran appear in the east-southeastern sky after sunset this week; the Moon appears near Mars on Dec. 23rd. 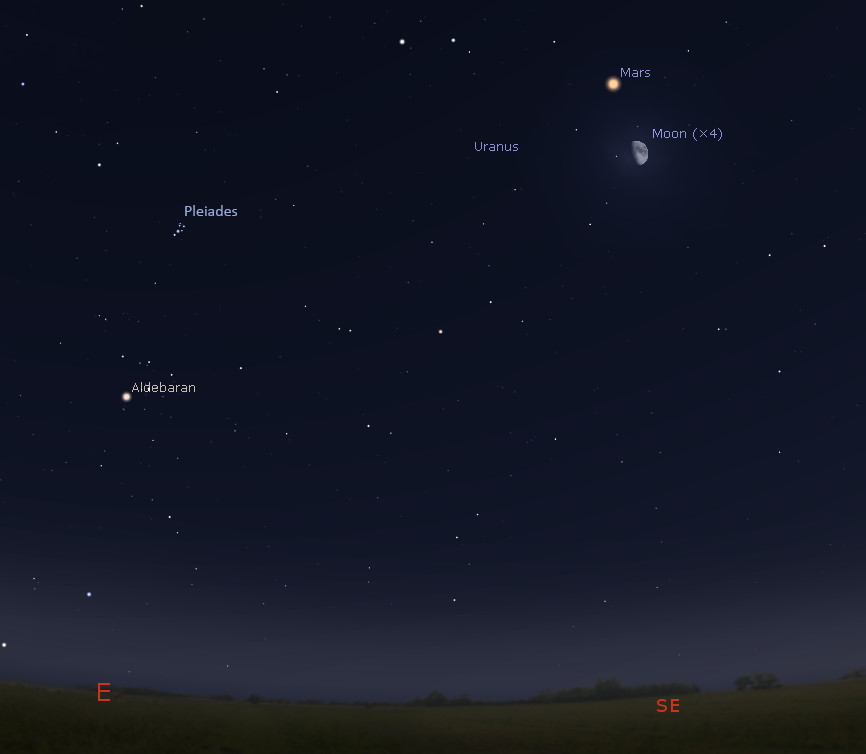 The Moon and Mars appear high in the southeastern sky after sunset; over in the eastern sky are the constellation Taurus, with the bright star Aldebaran and the Pleiades star cluster. Credit: Bob Trembley / Stellarium.

At midnight, the Moon and Mars will appear above the western horizon. 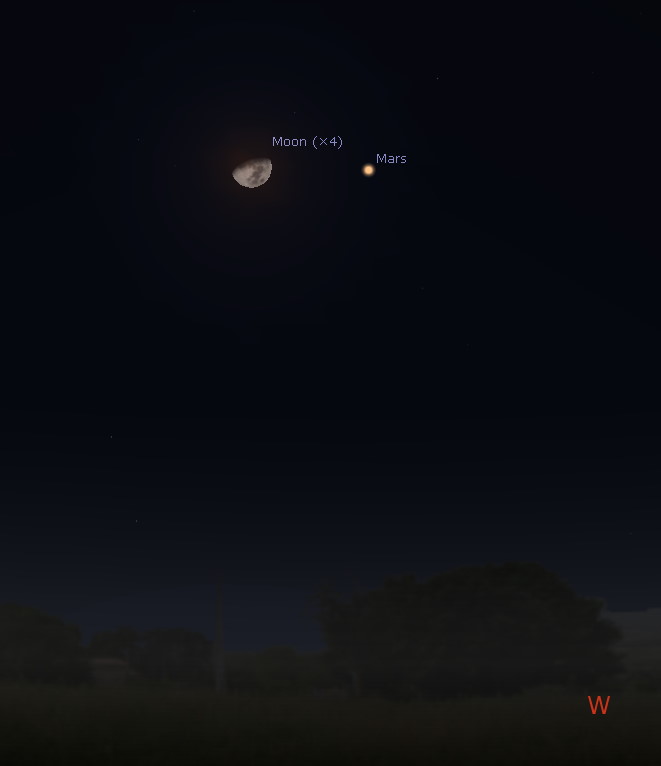 The Moon and Mars appear above the western horizon at midnight. Credit: Bob Trembley / Stellarium.

Venus appears in the southeastern predawn sky all week. 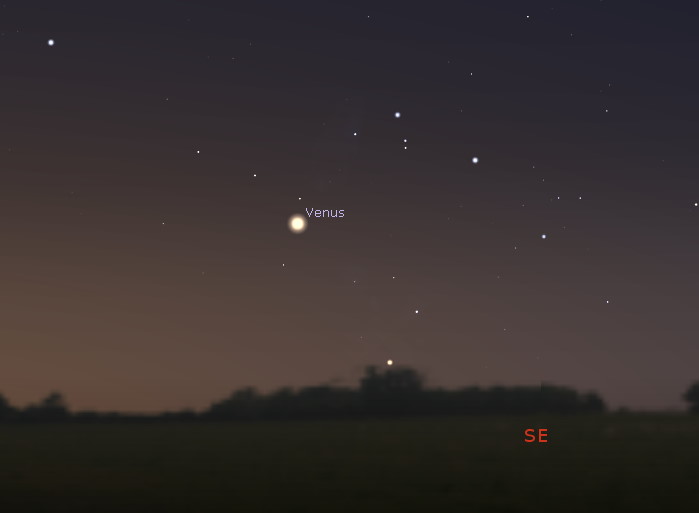 The constellation Ursa Major appears in the northeastern sky at midnight; the handle of the “Big Dipper” asterism points down toward the horizon. 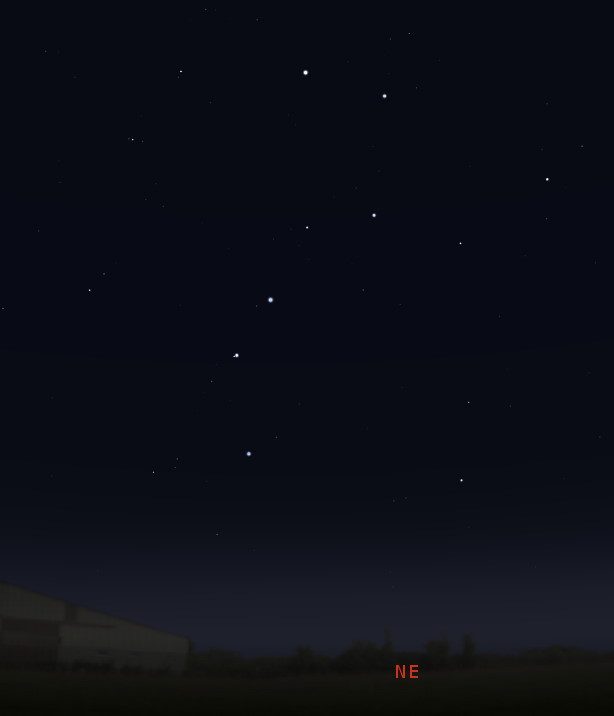 The Moon is a waxing gibbous– visible to the southeast in early evening, and up for most of the night. This is also the perfect observing target for that new telescope!

The full Moon occurs on Dec, 30th – rising at sunset, visible high in the sky around midnight, and visible all night. 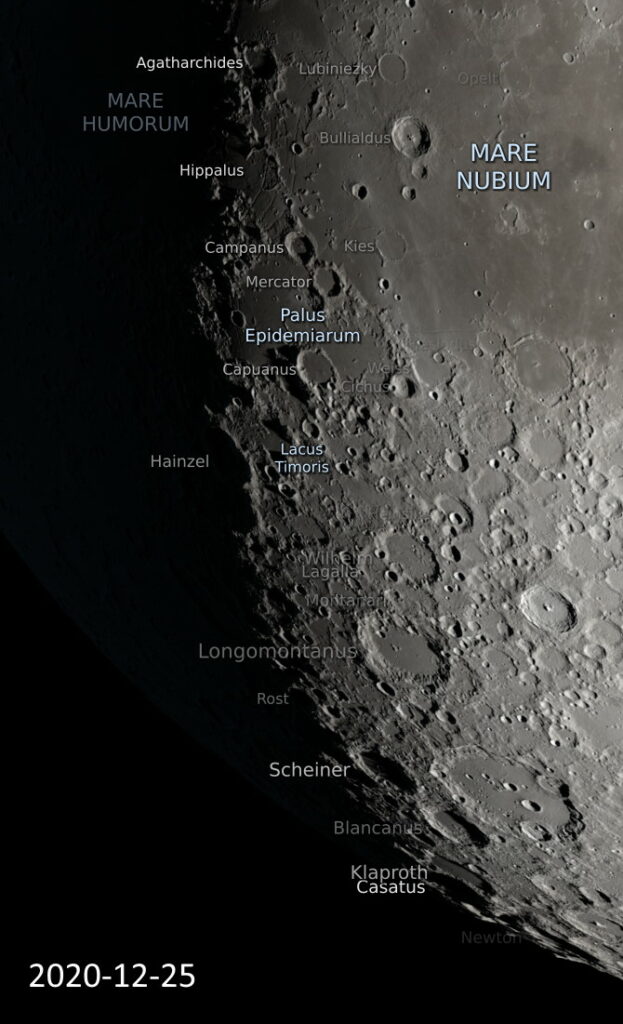 Annotated close-up of a section of the Moon on Dec. 25th. – showing the play of shadows along the terminator. Visualizations by Ernie Wright / NASA’s Scientific Visualization Studio.

This #MoonCrushMonday we celebrate the launch of #Apollo8 which lifted off 52 years ago today. This was the first crewed mission to the Moon, with the astronauts becoming the first humans to see the lunar far side. ? https://t.co/7c5y8PnyKT pic.twitter.com/12g6qfC9YZ

The Sun has 1 spot; sunspot AR2794 is not very energetic and currently poses no threat for strong solar flares.

Sunspot AR2794 is large but magnetically simple. It does not appear to pose a threat for strong flares. Credit: SDO/HMI/Spaceweather.com

The SOLARACTIVITY picture of the day for December 22nd, 2020 is this amazing presentation showing the locations of sunrise done over a year by Zaid M. Al-Abbadi and was featured as APOD. Image Credit & Copyright: Zaid M. Al-Abbadi

‘Nanoflares’ are tiny solar eruptions, a billion times smaller than regular solar flares. For the first time since they were predicted in 1972, a research team may have found them. It may be key to one of the biggest mysteries of solar science. https://t.co/Q7kOUvjKki pic.twitter.com/b2AeCz3Yh4 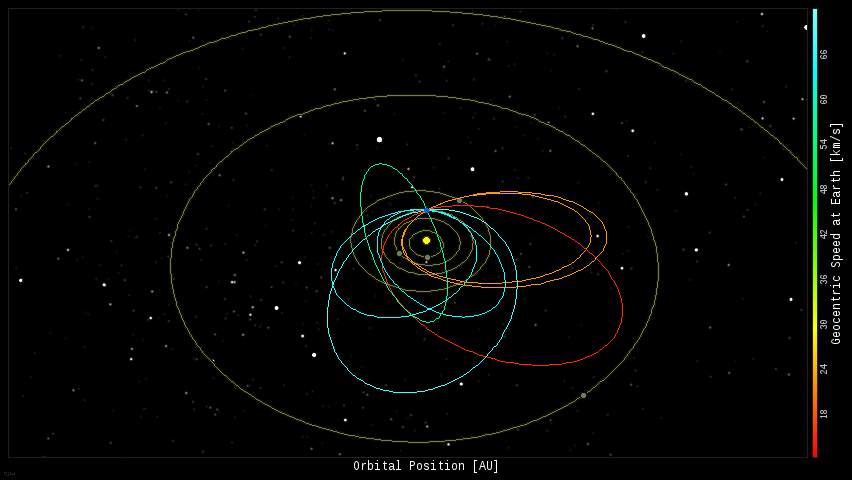 Nice fireball caught this morning by Dan S. from Zimmerman, #Minnesota. This event happened this morning over the border between MN & WI.

If you saw it, please report it here: https://t.co/N0EuOVkOgj 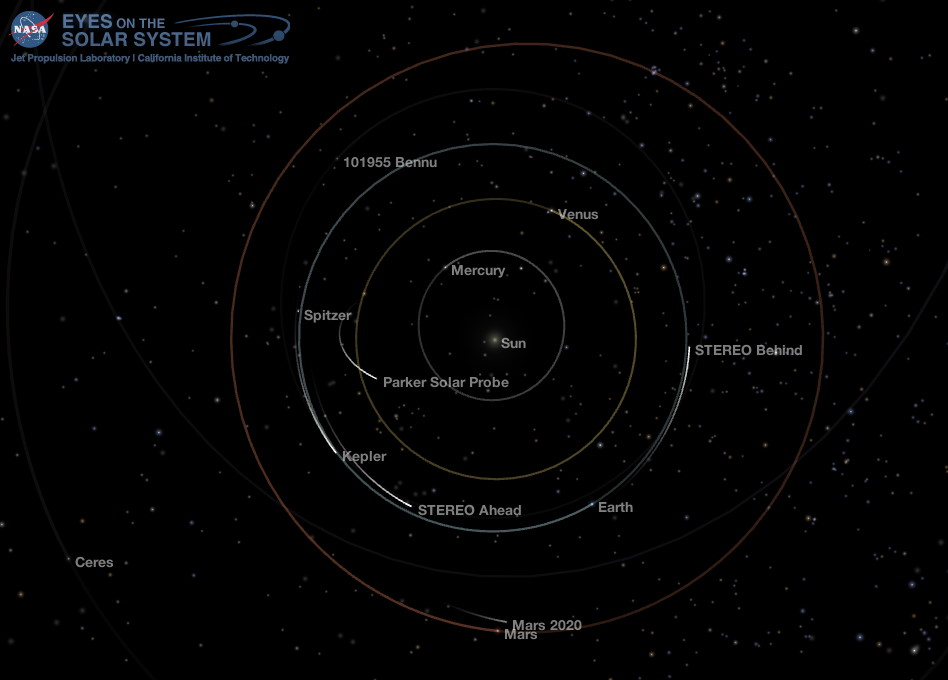 Position of the planets and a couple spacecraft in the inner solar system, 2020-12-22. Credit: Bob Trembley / NASA Eyes on the Solar System. 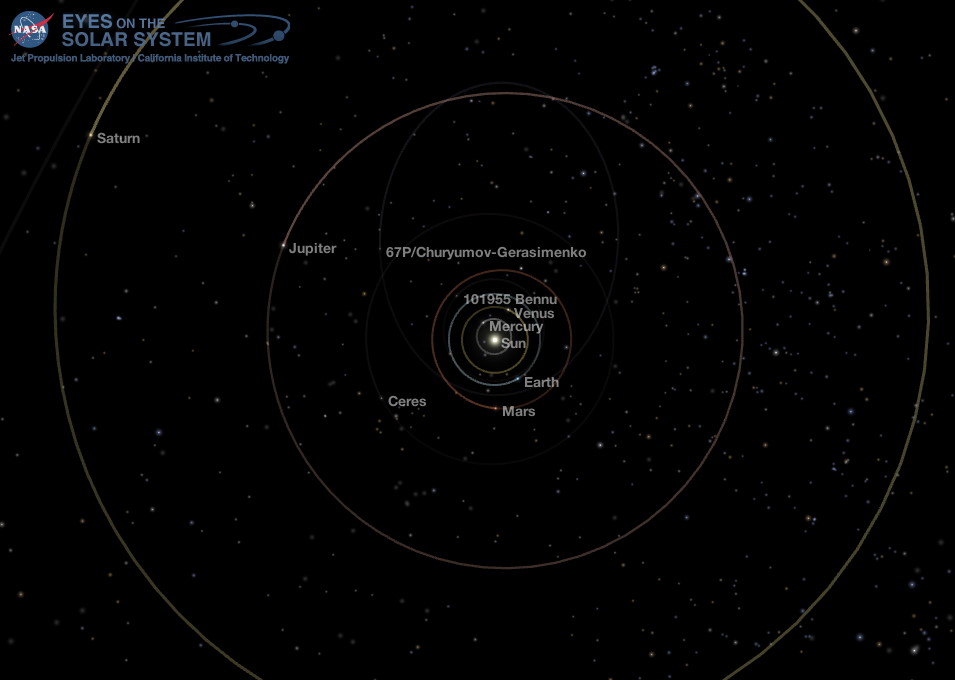 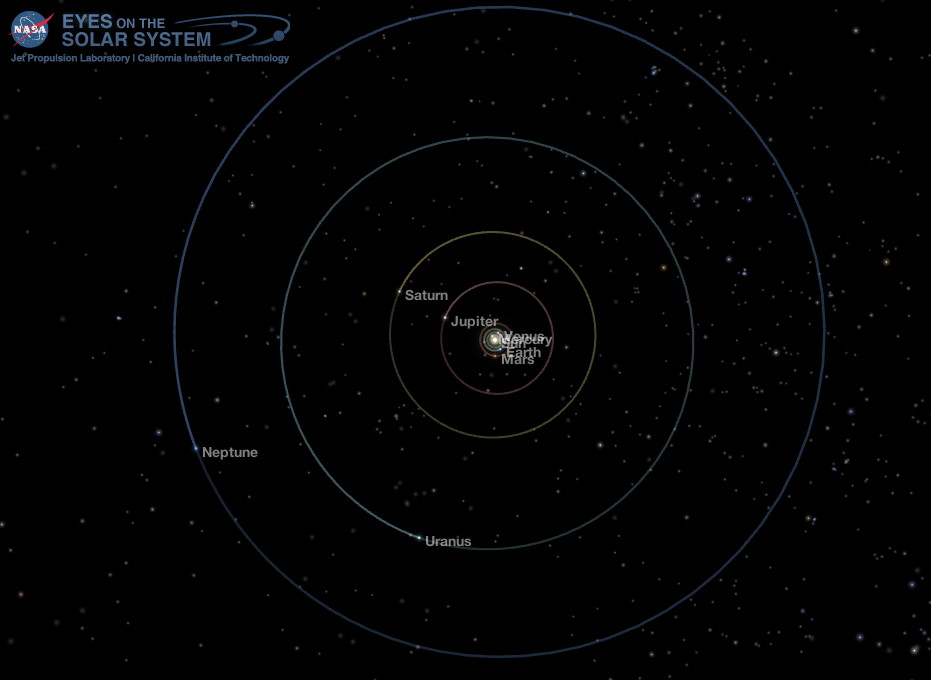 Position of the planets and some transneptunian objects in the outer solar system, 2020-12-22. Credit: Bob Trembley / NASA Eyes on the Solar System.

When you see the #GreatConjunction, remember that Jupiter isn’t just a point of light, but a world, surrounded by planet-sized moons that are, in turn, intriguing worlds themselves. See you soon, Europa. https://t.co/rORF6MYHjc pic.twitter.com/AC5SrTh0hj

I’m less than two months away from the big day. My #CountdownToMars ends Feb. 18. See what it takes to land on Mars with this mission trailer.

HiPOD: Looking for Salts on Mars

Why are scientists interested in areas that contain salts on Mars? Simply put, salts usually form by evaporation of liquid water.

What might look like a hanging Christmas ornament is an image of the planetary nebula NGC 6818 showing two distinct layers of gas (with dust): a spherical outer region and a brighter, vase-shaped interior 'bubble.' https://t.co/Q5J4fiK3sR pic.twitter.com/DjMF8tjSEX

Seven USGS-NASA Landsat Science Team members offered their insights into how the delay of Landsat 9’s launch will affect the work they do in 2021.

NASA researchers are using satellite and ground-based observations to track the impacts of COVID-related shutdowns on Earth’s environments. A free online dashboard displays the data.https://t.co/O7Yq8feC4E

As of today, we've discovered 4,324 exoplanets – worlds beyond our own solar system. We've found planets where it could rain glass, or precious jewels! Others with lava seas and sparkling skies. We love them all.https://t.co/G8HwE04ACN pic.twitter.com/a0OSgU6J72

We are very pleased to announce that Medicine Rocks State Park is now designated as an International Dark Sky Sanctuary! On 1/7/2021, the Carter County Museum will kick off the first virtual dark sky program with more dates to follow!

Resembling festive lights on a holiday wreath, this NASA/ESA Hubble Space Telescope image of the nearby spiral galaxy M74 is an iconic reminder of the impending season. Bright knots of glowing gas light up the spiral arms, indicating a rich environment of star formation.

Messier 74, also called NGC 628, is a stunning example of a “grand-design” spiral galaxy that is viewed by Earth observers nearly face-on. Its perfectly symmetrical spiral arms emanate from the central nucleus and are dotted with clusters of young blue stars and glowing pink regions of ionized hydrogen (hydrogen atoms that have lost their electrons). These regions of star formation show an excess of light at ultraviolet wavelengths. Tracing along the spiral arms are winding dust lanes that also begin very near the galaxy’s nucleus and follow along the length of the spiral arms.

M74 is located roughly 32 million light-years away in the direction of the constellation Pisces, the Fish. It is the dominant member of a small group of about half a dozen galaxies, the M74 galaxy group. In its entirety, it is estimated that M74 is home to about 100 billion stars, making it slightly smaller than our Milky Way.

The spiral galaxy was first discovered by the French astronomer Pierre Méchain in 1780. Weeks later it was added to Charles Messier’s famous catalog of deep-sky objects.

This Hubble image of M74 is a composite of Advanced Camera for Surveys data taken in 2003 and 2005. The filters used to create the color image isolate light from blue, visible, and infrared portions of the spectrum, as well as emission from ionized hydrogen (known as HII regions).

A small segment of this image used data from the Canada-France-Hawaii Telescope and the Gemini Observatory to fill in a region that Hubble did not image. – NASA/JPL-Caltech

Around early October, we asked our friend Jennifer Skwarski if she would be willing to make me a Victorian Santa outfit. It will be my granddaughter Alayanora’s first Christmas, and she won’t be able to go see Santa. When we picked the costume up, we were completely blown away by the beauty and craftmanship of this robe! My wife Connie modded a staff we got from the Michigan Renaissance Festival, and I got white gloves and a couple different glasses. I played Santa for my granddaughter last weekend; I need to work on my Santa chuckle. 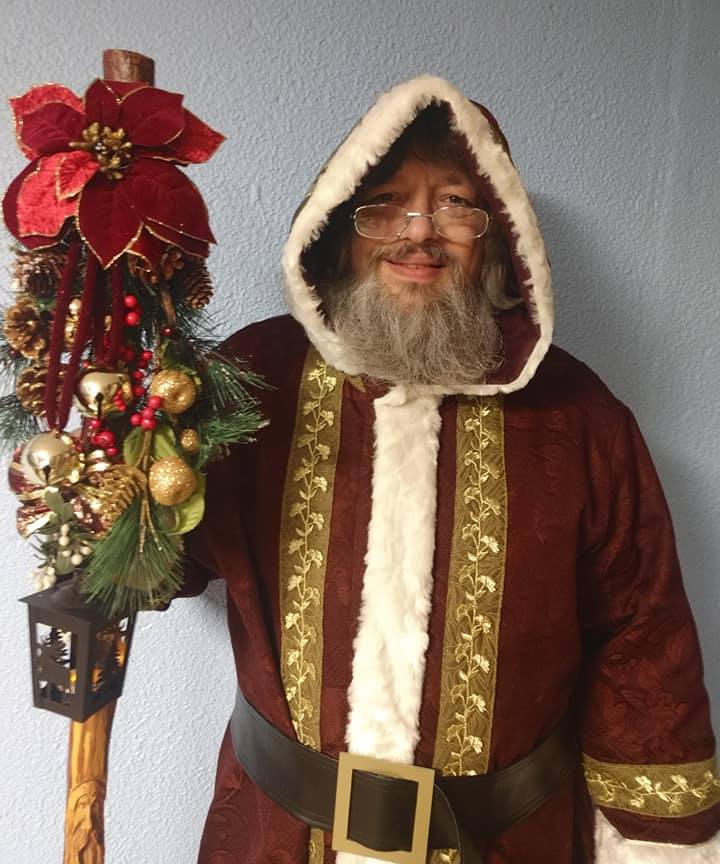