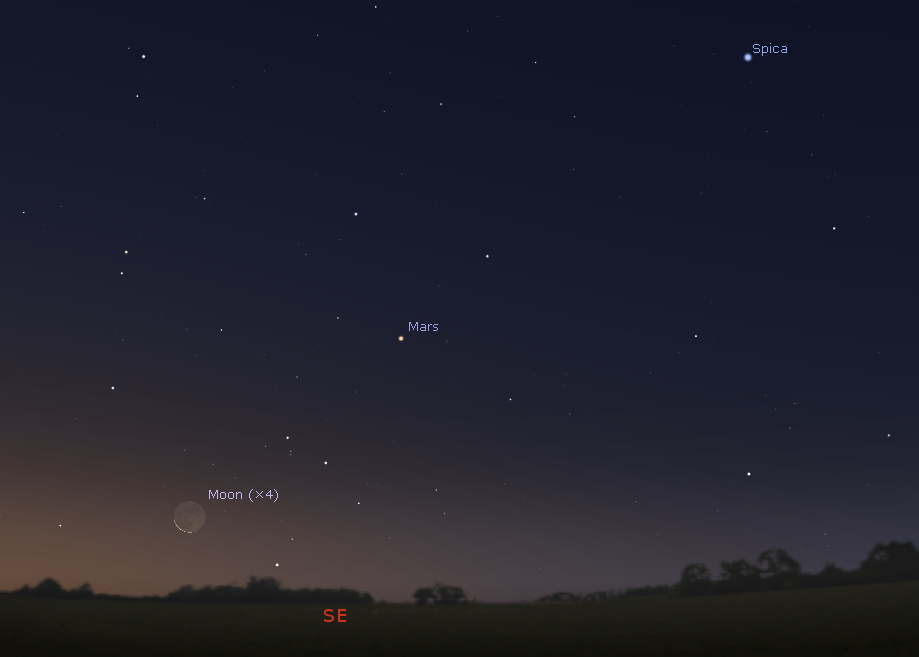 The waning crescent Moon joined Mars and the star Spica in the southeastern sky before sunrise on Dec. 24th – Mercury has vanished from the morning sky, and will return to the southwestern sky at dusk at the end of January 2020.

The waning crescent Moon, Mars and the star Spica align above the southeastern horizon before dawn on Dec. 24th. Credit: Stellarium / Bob Trembley

Saturn and Venus continue to move away from each other in the southwestern sky after sunset each evening – Saturn is very low on the horizon; the waxing crescent Moon joins Venus and Saturn on the evenings of Dec.27-29.

The red supergiant star Betelgeuse in the Constellation Orion appears high in the southern sky at midnight this week; this last week, I saw numerous tweets from astronomer about Betelgeuse, so I thought highlighting it might be appropriate. 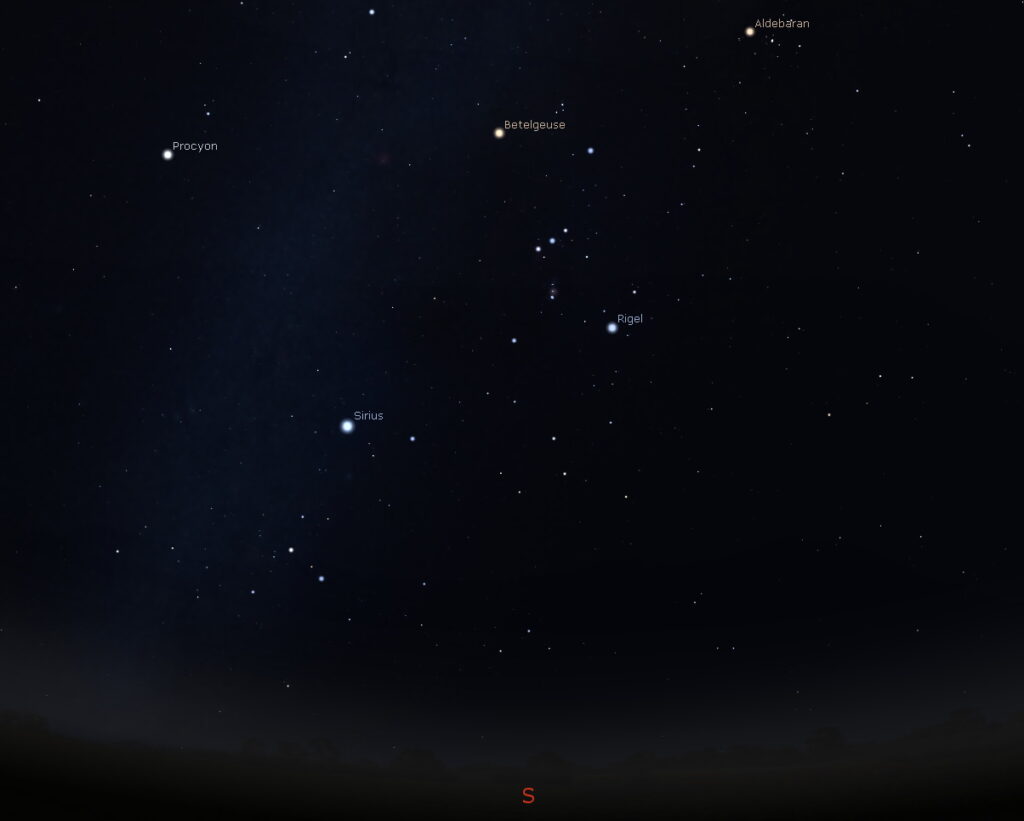 The star Betelgeuse in the constellation Orion high above the southern horizon at midnight this week. Credit: Stellarium / Bob Trembley. 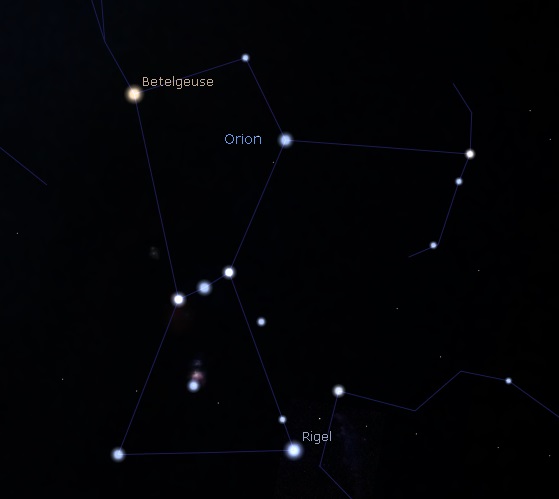 Betelgeuse is generally the ninth-brightest star in the night sky and second-brightest in the constellation of Orion (after Rigel). It is a distinctly wreddish, semiregular variable star whose apparent magnitude varies between +0.0 and +1.3, the widest range of any first-magnitude star. At near-infrared wavelengths, Betelgeuse is the brightest star in the night sky. It has the Bayer designation α Orionis, which is Latinised to Alpha Orionis and abbreviated Alpha Ori or α Ori.

Classified as a red supergiant of spectral type M1-2, Betelgeuse is one of the largest stars visible to the naked eye. If Betelgeuse were at the center of the Solar System, its surface would extend past the asteroid belt, engulfing the orbits of Mercury, Venus, Earth, Mars, and possibly Jupiter. However, there are several other red supergiants in the Milky Way that are larger, such as Mu Cephei and VY Canis Majoris. Calculations of its mass range from slightly under ten to a little over twenty times that of the Sun. It is calculated to be 640 light-years away, yielding an absolute magnitude of about −6. Less than 10 million years old, Betelgeuse has evolved rapidly because of its large mass. Having been ejected from its birthplace in the Orion OB1 Association—which includes the stars in Orion’s Belt—this runaway star has been observed moving through the interstellar medium at a speed of 30 km/s, creating a bow shock over four light-years wide. Betelgeuse is in the last stages of its evolution, and it is expected to explode as a supernova within the next million years. Some recent sources estimate a supernova event from today to 100 000 years. – Wikipedia

Observers have reported that Betelgeuse has been dimming recently – this tweet-thread has an excellent explanation of how red giants act:

space twitter has been buzzing recently with the observation that Betelgeuse is much, much dimmer than usual. what could that mean?! does it mean that it's close to explosion?

In 1996, Betelgeuse was the first star other than the Sun to have it’s surface directly imaged: 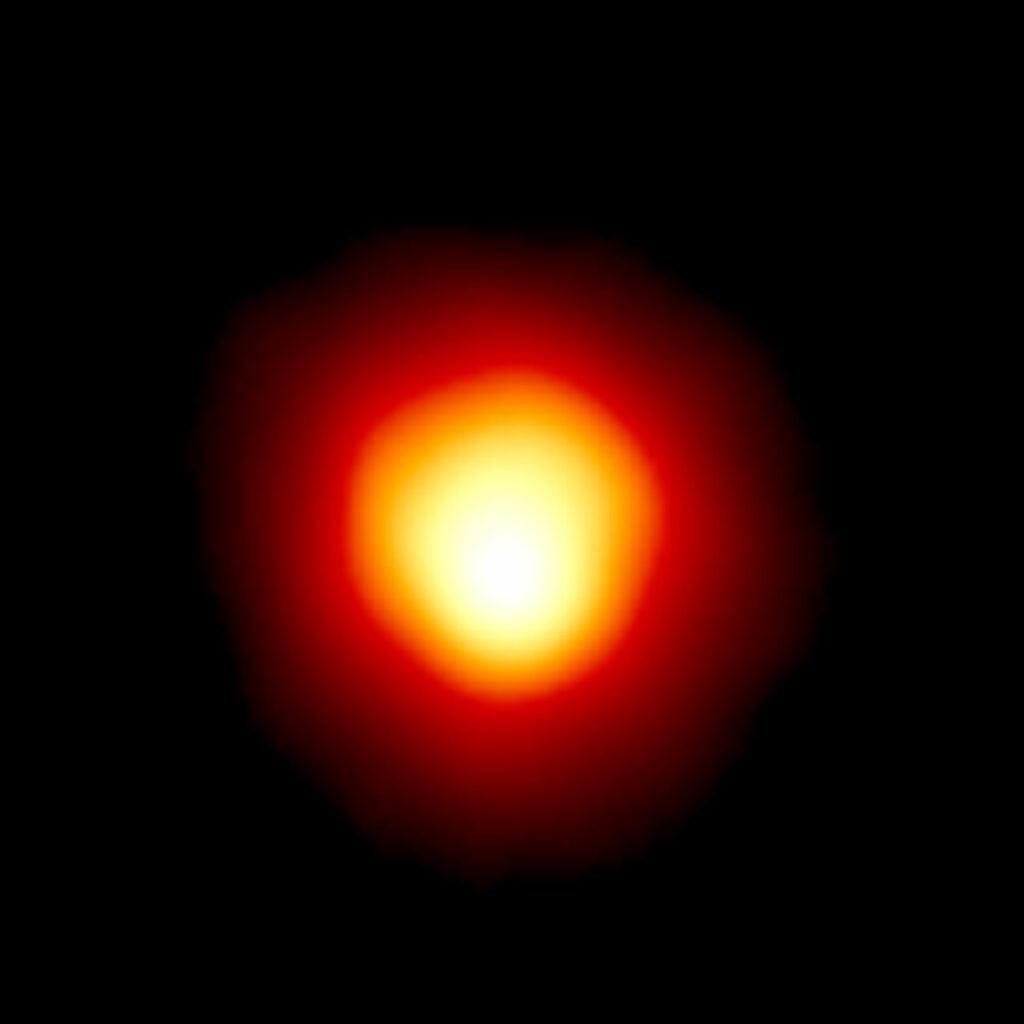 This is the first direct image of a star other than the Sun, made with the Hubble Space Telescope. Called Alpha Orionis, or Betelgeuse, it is a red supergiant star marking the shoulder of the winter constellation Orion the Hunter. The Hubble image reveals a huge ultraviolet atmosphere with a mysterious hot spot on the stellar behemoth’s surface. The enormous bright spot, more than ten times the diameter of Earth, is at least 2, 000 Kelvin degrees hotter than the surface of the star. Credit: Andrea Dupree (Harvard-Smithsonian CfA), Ronald Gilliland (STScI), NASA and ESA

In 2017, the surface of Betelgeuse was imaged by the Atacama Large Millimeter/submillimeter Array (ALMA) 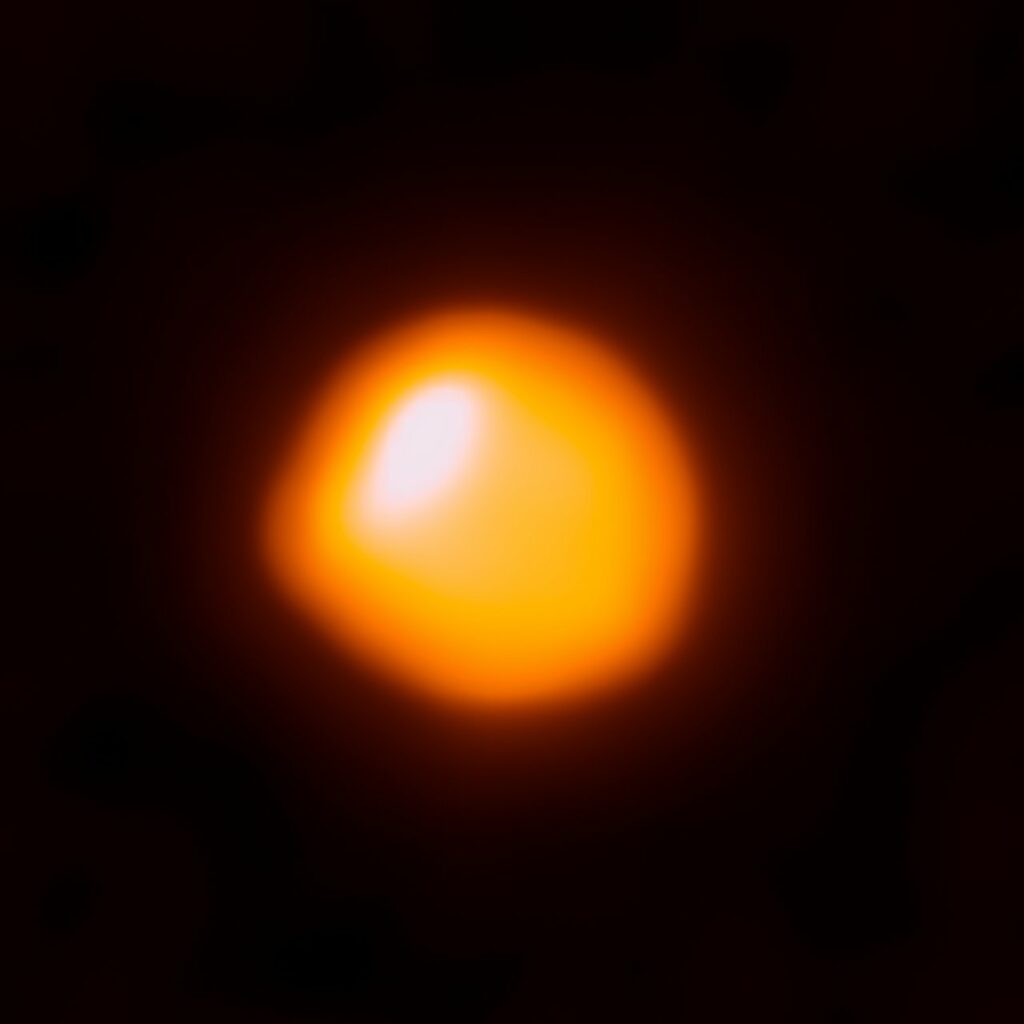 This orange blob shows the nearby star Betelgeuse, as seen by the Atacama Large Millimeter/submillimeter Array (ALMA). This is the first time that ALMA has ever observed the surface of a star and this first attempt has resulted in the highest-resolution image of Betelgeuse available. Betelgeuse is one of the largest stars currently known — with a radius around 1400 times larger than the Sun’s in the millimeter continuum. About 600 light-years away in the constellation of Orion (The Hunter), the red supergiant burns brightly, causing it to have only a short life expectancy. The star is just about eight million years old, but is already on the verge of becoming a supernova. When that happens, the resulting explosion will be visible from Earth, even in broad daylight. The star has been observed in many other wavelengths, particularly in the visible, infrared, and ultraviolet. Using ESO’s Very Large Telescope astronomers discovered a vast plume of gas almost as large as our Solar System. Astronomers have also found a gigantic bubble that boils away on Betelgeuse’s surface. These features help to explain how the star is shedding gas and dust at tremendous rates (eso0927, eso1121). In this picture, ALMA observes the hot gas of the photosphere of Betelgeuse at sub-millimeter wavelengths — where localised increased temperatures explain why it is not symmetric. Scientifically, ALMA can help us to understand the extended atmospheres of these hot, blazing stars. Links: Size comparison: Betelgeuse and the Sun

Seen from nearby, Betelgeuse would look rather “lumpy.” 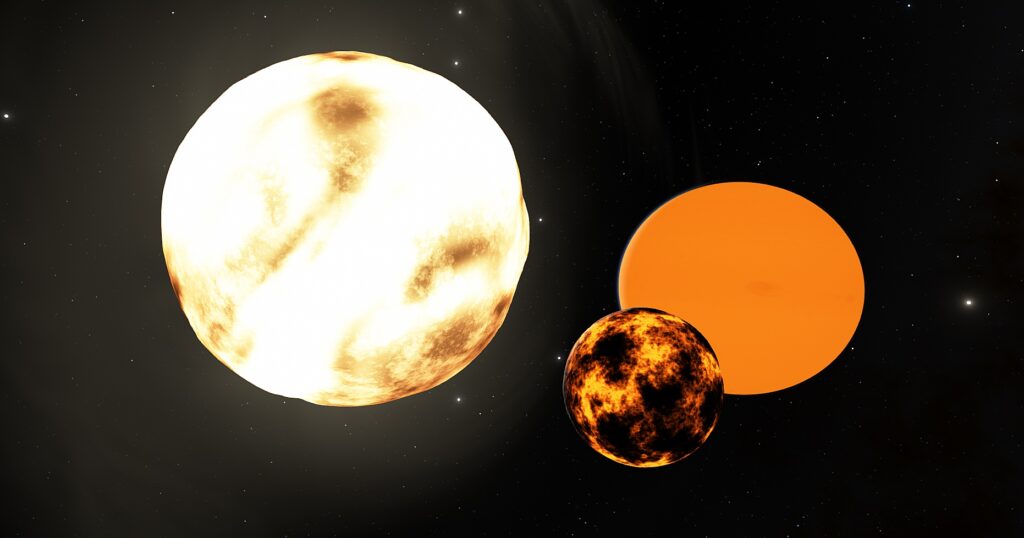 The Moon is a waning crescent, visible low to the east before sunrise – I saw this the last couple mornings, with earthshine!

After Dec. 26th, the Moon will be a waxing crescent, visible toward the southwest in early evening.

The Sun has been spotless for 40 days – continuing a long spot-free stretch. Large coronal holes remain open at both poles, and a small hole appears near the equator.

Light prominence activity over the last couple days – if you watch the video below closely, you will see several tall and short-lived prominences popping-up all over the Sun’s limb.

It's getting hot in here! ? We’re opening our doors for social media users to come behind-the-scenes of @NASAKennedy for the Feb. 5 launch of a @ULALaunch #AtlasV rocket carrying the @ESASolarOrbiter spacecraft that will study the Sun. Get more details: https://t.co/Nxam8LqlQW pic.twitter.com/NERyxIz0ul

In this diagram of the inner solar system, all of the fireball orbits intersect at a single point–Earth. The orbits are color-coded by velocity, from slow (red) to fast (blue). From: Spaceweather.com
Share: