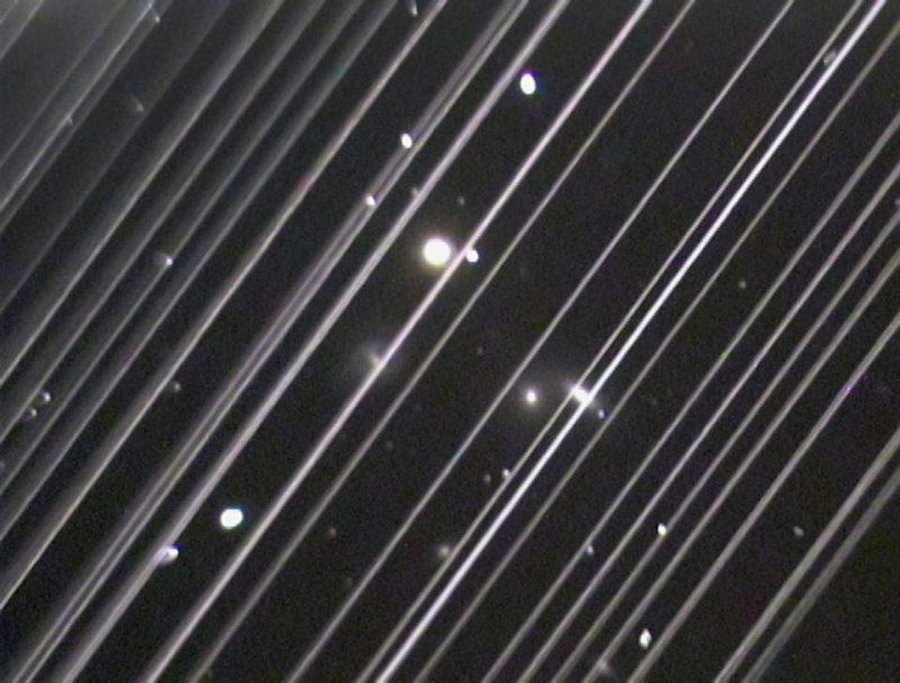 At last night’s meeting of the Warren Astronomical Society, the topic of the Starlink satellite constellation came up during the “In the News” segment, and a groan of dismay could be heard from the entire audience. If you are unfamiliar with Starlink, it is a constellation of potentially tens of thousands of communication satellites created by SpaceX with the goal of providing global high-speed internet – that concept sounds great!

Starlink satellites during a meteor shower on Nov. 22. pic.twitter.com/wJVk1qu49E

The first time I became aware of Starlink was after the 2nd satellite deployment mission of May of 2019, when 60 satellites were put into a 53° Earth orbit. Almost immediately satellite sightings started pouring in from around the world. Videos show a long trail of lights traversing the sky, virtually painting the orbits of the satellites in your mind’s eye, and literally painting them in the cameras of astronomers and astrophotographers – who have started complaining loudly!

The NGC 5353/4 galaxy group is obscured by more than 25 Starlink satellite trails in this May 2019 image, taken from Lowell Observatory in Flagstaff, Arizona. Credit: Victoria Girgis/Lowell Observatory

The International Astronomical Union posted this statement on June 3, 2019:

Over the past decades, considerable effort has gone into designing, building, and deploying satellites for many important purposes. Recently networks, known as satellite constellations, have been deployed and are planned in ever greater numbers in mainly low-Earth orbits for a variety of purposes, including providing communication services to underserved or remote areas. Until this year, the number of such satellites was below 200, but that number is now increasing rapidly, with plans to deploy potentially tens of thousands of them. In that event, satellite constellations will soon outnumber all previously launched satellites.

The International Astronomical Union (IAU) is concerned about these satellite constellations. The organisation, in general, embraces the principle of a dark and radio-quiet sky as not only essential to advancing our understanding of the Universe of which we are a part, but also as a resource for all humanity and for the protection of nocturnal wildlife. We do not yet understand the impact of thousands of these visible satellites scattered across the night sky and despite their good intentions, these satellite constellations may threaten both.

The scientific concerns are twofold. Firstly, the surfaces of these satellites are often made of highly reflective metal, and reflections from the Sun in the hours after sunset and before sunrise make them appear as slow-moving dots in the night sky. Although most of these reflections may be so faint that they are hard to pick out with the naked eye, they can be detrimental to the sensitive capabilities of large ground-based astronomical telescopes, including the extreme wide-angle survey telescopes currently under construction. Secondly, despite notable efforts to avoid interfering with radio astronomy frequencies, aggregate radio signals emitted from the satellite constellations can still threaten astronomical observations at radio wavelengths. Recent advances in radio astronomy, such as producing the first image of a black hole or understanding more about the formation of planetary systems, were only possible through concerted efforts in safeguarding the radio sky from interference.

The IAU is a science and technology organisation, stimulating and safeguarding advances in those areas. Although significant effort has been put into mitigating the problems with the different satellite constellations, we strongly recommend that all stakeholders in this new and largely unregulated frontier of space utilisation work collaboratively to their mutual advantage. Satellite constellations can pose a significant or debilitating threat to important existing and future astronomical infrastructures, and we urge their designers and deployers as well as policy-makers to work with the astronomical community in a concerted effort to analyse and understand the impact of satellite constellations. We also urge appropriate agencies to devise a regulatory framework to mitigate or eliminate the detrimental impacts on scientific exploration as soon as practical.

The IAU’s Commission B7 Protection of Existing and Potential Observatory Sites welcomes the opportunity to work proactively with everyone involved in these efforts. – IAU

Elon Musk initially dismissed astronomer’s complaints, but has since agreed to take steps to reduce the albedo of the satellites; I’ve seen comments by supporters (or quite possibly internet trolls) accusing detractors of being Luddites – these Luddites would include astronomers who use high-tech multi-million dollar equipment… While I was researching the Starlink launch date for this post, I was surprised at the rather lengthy history section of the Wikipedia entry, and embarrassed at my near total lack of knowledge of that history. This story certainly has my attention now; I’m certain this story will be on-going and developing over the next several years.

The Moon appears in the sky at 3:00 PM for several days this week – about the time schools get out. If it’s clear, I want to bring my ‘scope to my after-school club and have the students see it. 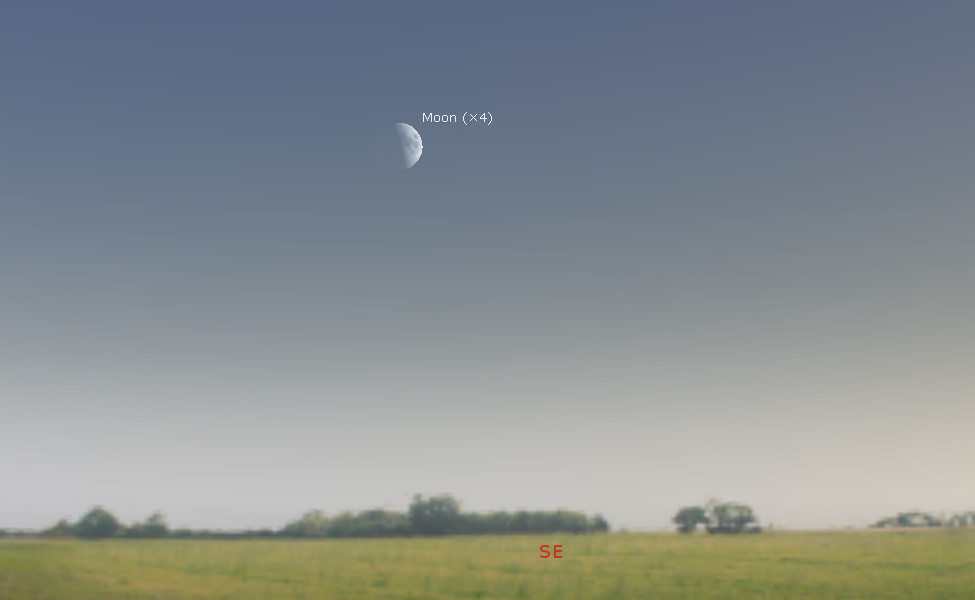 The Moon appears above the east-southeastern horizon at 3:00 PM from Dec. 3-6th. Credit: Stellarium / Bob Trembley

Mercury, Mars and the star Spica align above the southeastern horizon before sunrise this week. 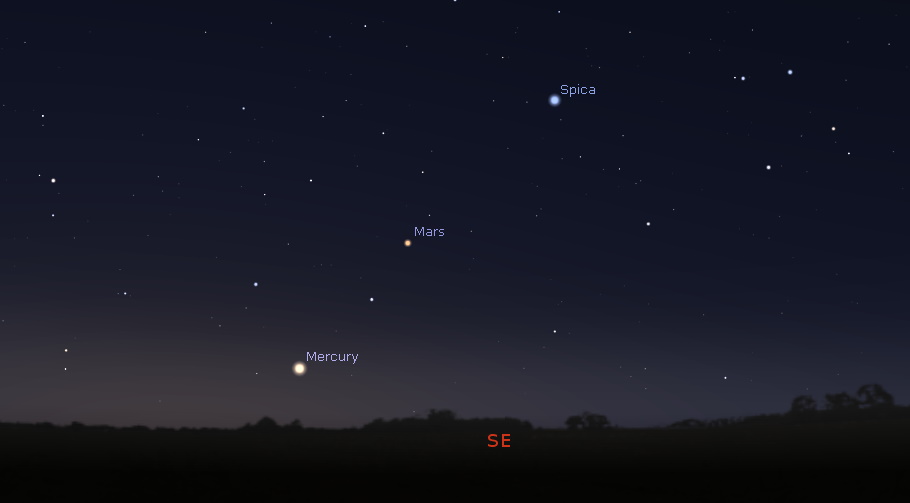 The Moon appears high above the south-southeastern horizon after sunset for several days this week – this is an ideal time to observe the Moon with binoculars or a telescope. 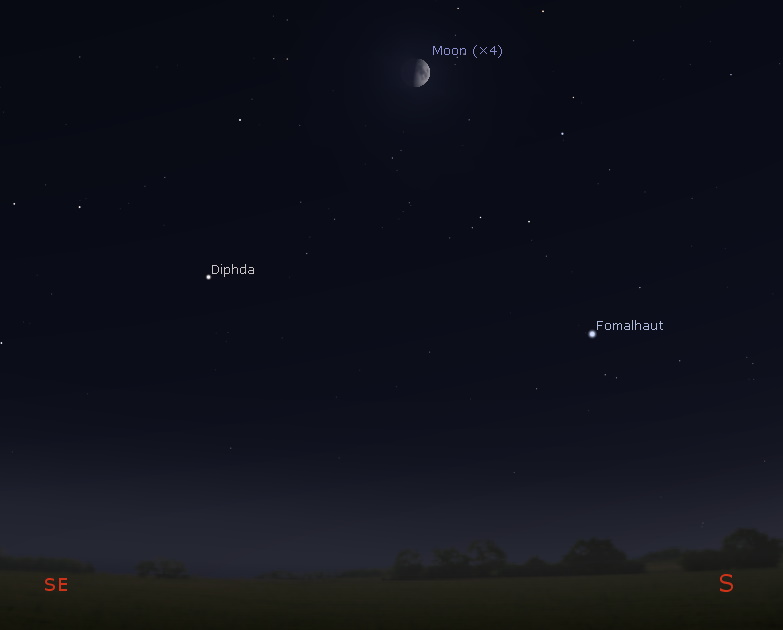 The Moon high above the south-southeastern horizon after sunset for several days this week. Credit: Stellarium / Bob Trembley

The Andromeda galaxy appears almost directly overhead around 8:30 PM this week – as do the constellations Andromeda and Pegasus. 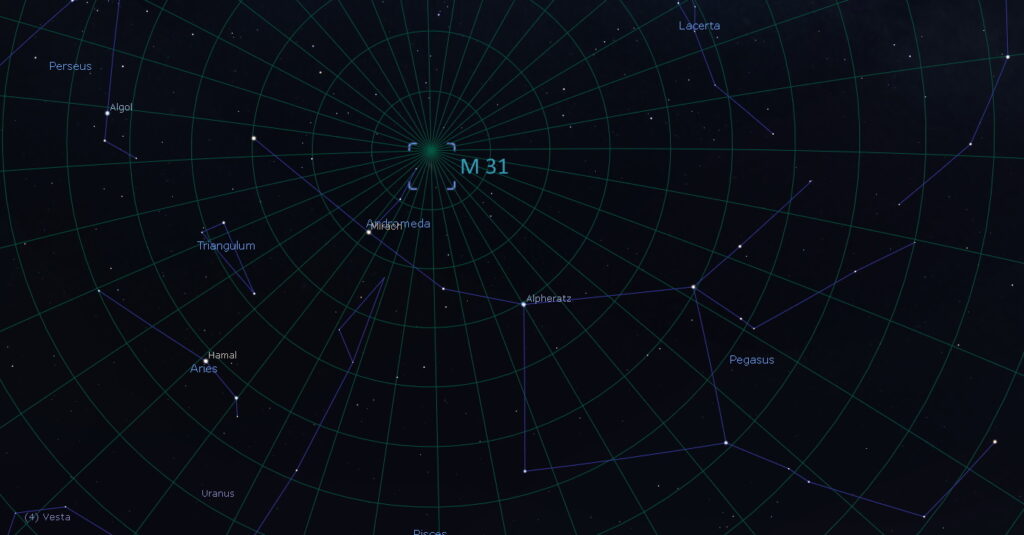 Let me know if you have an observing session this week where you do NOT see a Starlink satellite.

The Moon is a waxing crescent, visible toward the southwest in early evening – the Moon is a great observing target this week!

The Moon will be at first quarter on Dec. 4th, it will be visible high in the southern sky in early evening.

After Dec. 4th, the Moon will be a waxing gibbous, visible to the southeast in early evening, up for most of the night.

These fractures in Komarov crater were made by magma – yes, you read that right – magma. Molten material bubbled up below the surface, pushing the Moon’s crust up and fracturing it in the process. This image shows an area just over 9 miles (15 km) wide. https://t.co/SCN9z6S1C3 pic.twitter.com/jzuVbLU92B

The Sun has been spotless for 20 days; large coronal holes appear at both poles – the southern hole has gotten very large .

Several prominences on the Sun’s l today! I’m going to have to crack out my solar telescope when I finish this post!

Videos courtesy of NASA/SDO and the AIA, EVE, and HMI science teams.

On Dec. 4, scientists are sharing new discoveries about the Sun from #ParkerSolarProbe — and we’ll discuss with experts during #NASAScience Live!

More on the Hera Mission:

Go for Didymoon! ESA's #asteroid #HeraMission for #PlanetaryDefense has been approved by Europe's space ministers at #Space19plus. The spacecraft will be Europe's contribution to the international #AIDA4Asteroids endeavour, teamed with @NASA's DART mission https://t.co/vEcmuPbfQw pic.twitter.com/PBBBurDRM1

#HeraMission will be an extremely agile, 'self-driving' spacecraft to navigate around the double #DidymosAsteroid system, with a 780 m body orbited by a 160 m moon – seen here by #SagradaFamília in #Barcelona. It will carry 2 tiny #CubeSats to go closer https://t.co/vEcmuPbfQw pic.twitter.com/P3xZ6oZzud 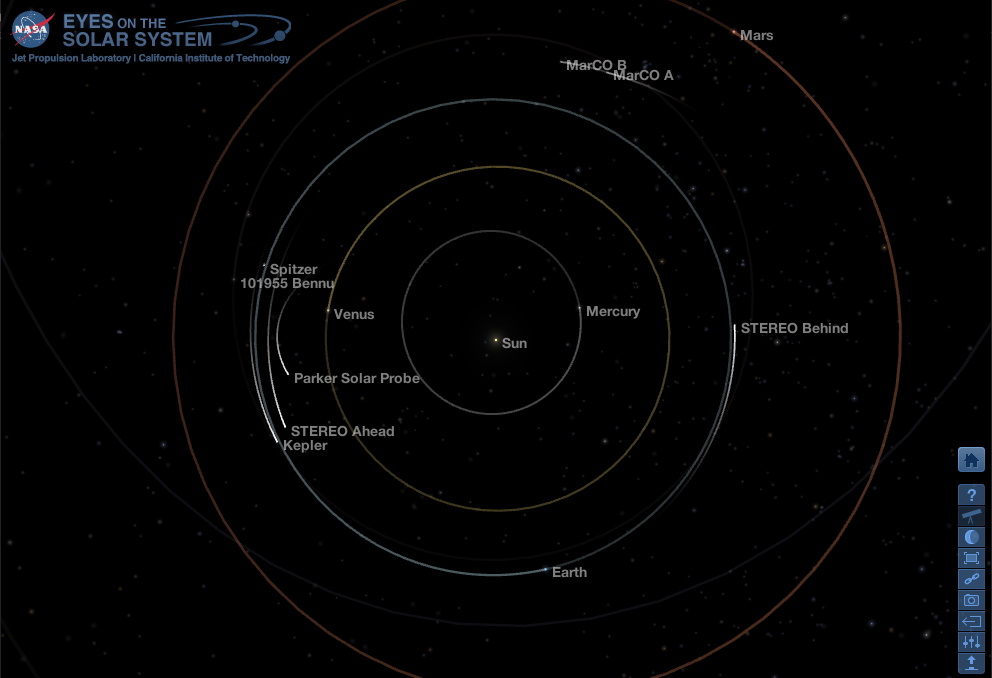 Position of the planets and some spacecraft in the inner solar system, Dec. 3, 2019. Credit: NASA Eyes on the Solar System / Bob Trembley. 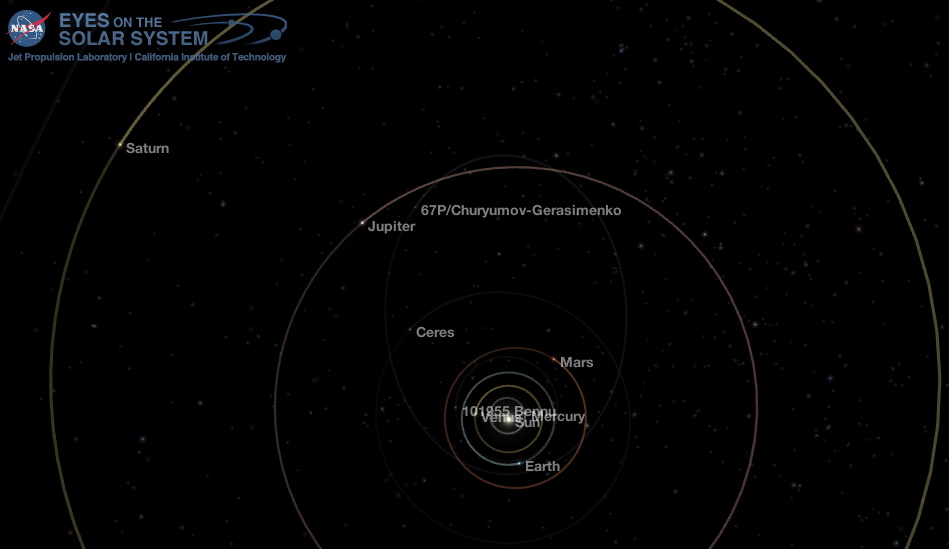 Position of the planets in the middle solar system, Dec. 3, 2019. Credit: NASA Eyes on the Solar System / Bob Trembley.

Position of the planets in the outer solar system, transneptunian object (TNO) and possible dwarf planet 420356 Praamzius is highlighted in red: 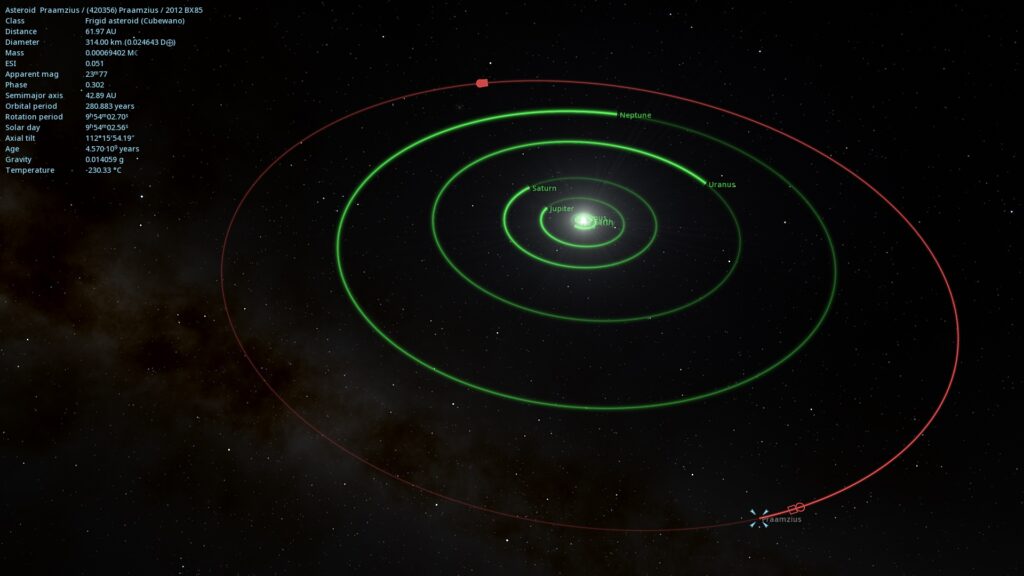 Position of the planets in the outer solar system, D