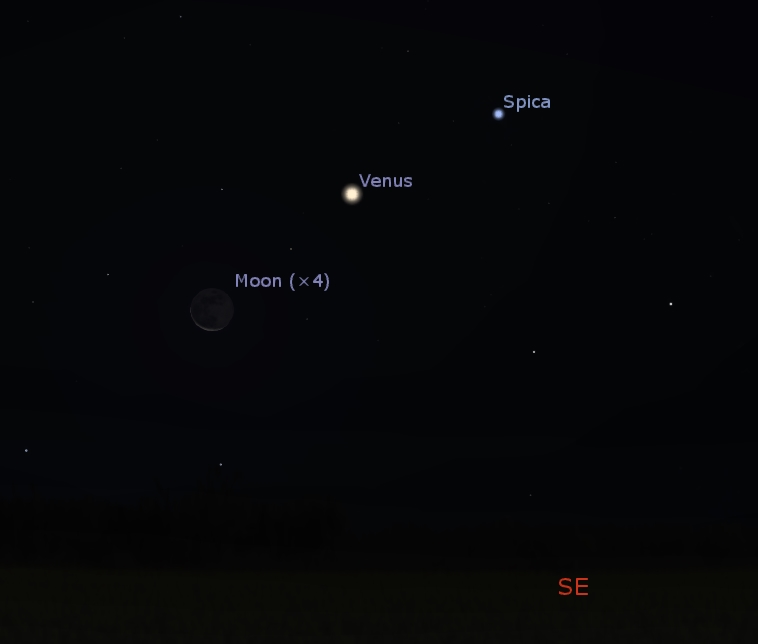 A very thin waning crescent Moon joins the weeks-long conjunction of Venus and Spica in the southeastern predawn sky on Dec. 4th.

Conjunction of Venus, Spica and a very thin crescent Moon low in the southeastern sky before sunrise on Dec. 4, 2018. Credit: Stellarium / Bob Trembley.

Mars remains high in southern sky after sunset all week; Mars is slowly fading in brightness as the Earth pulls away from it in its orbit (see solar system image below). 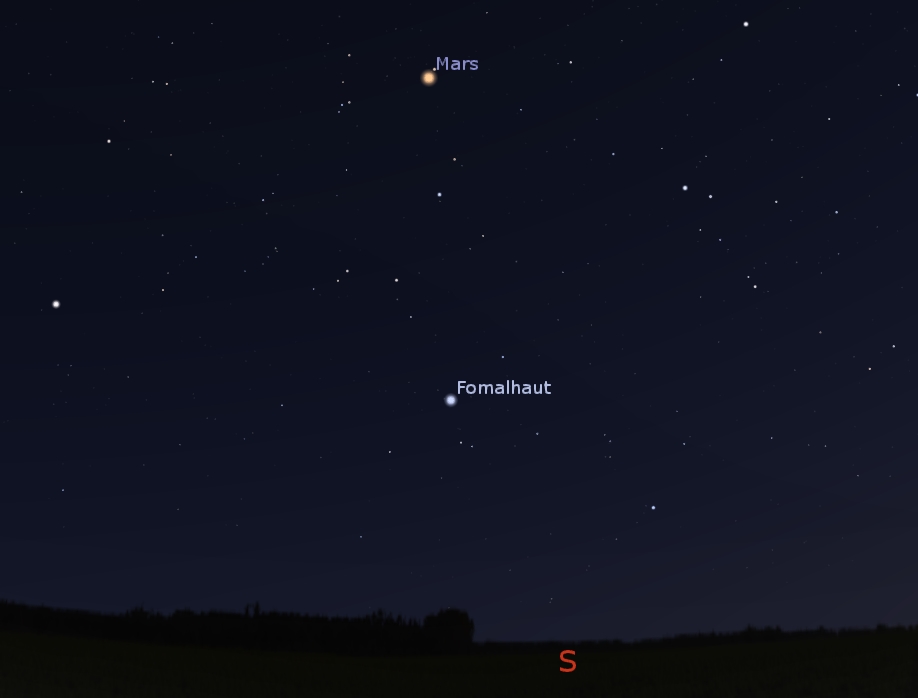 The very thin waxing crescent Moon will appear near Saturn in the southwestern sky at dusk on Dec. 8th. 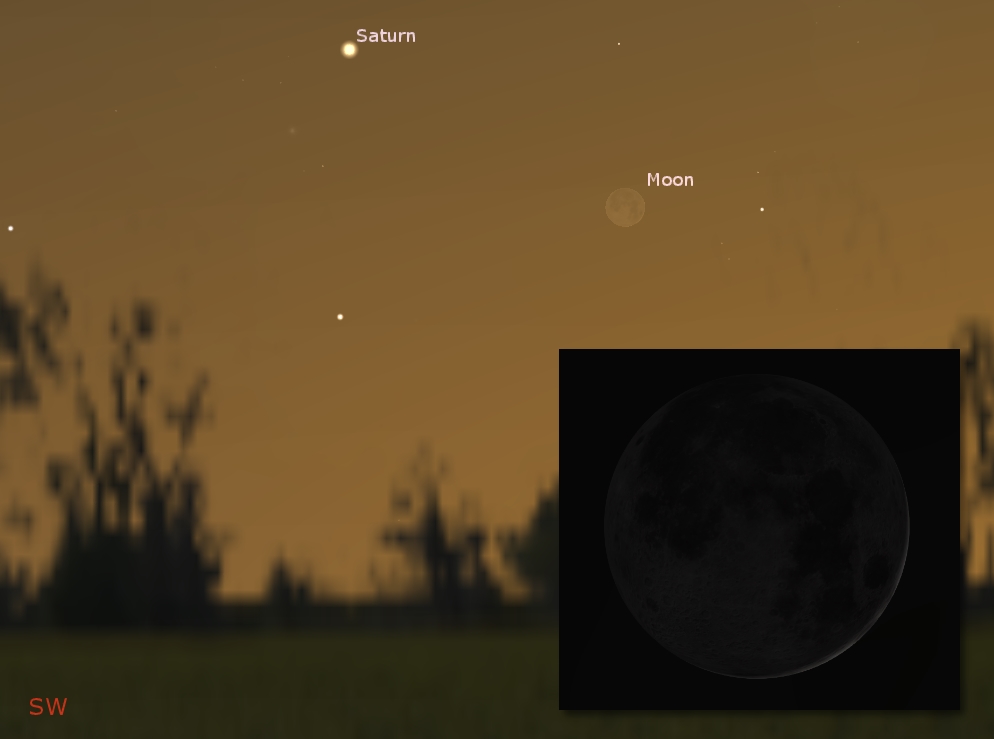 Conjunction of Saturn and a very thin crescent Moon low in the southwestern sky at dusk on Dec. 8, 2018. Credit: Stellarium / Bob Trembley.

The constellation Orion is high in the southeastern sky at midnight. 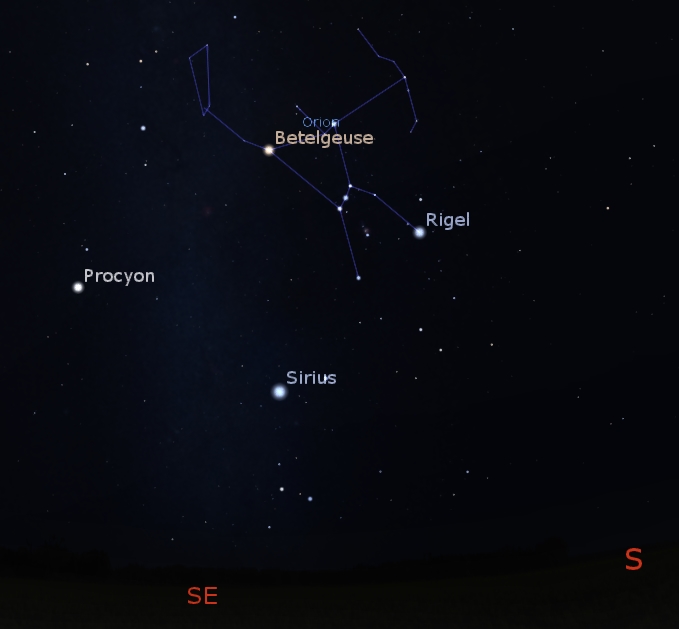 Messier 33 (or NGC 598) is a spiral galaxy located approximately 3 million light-years from Earth in the constellation Triangulum. 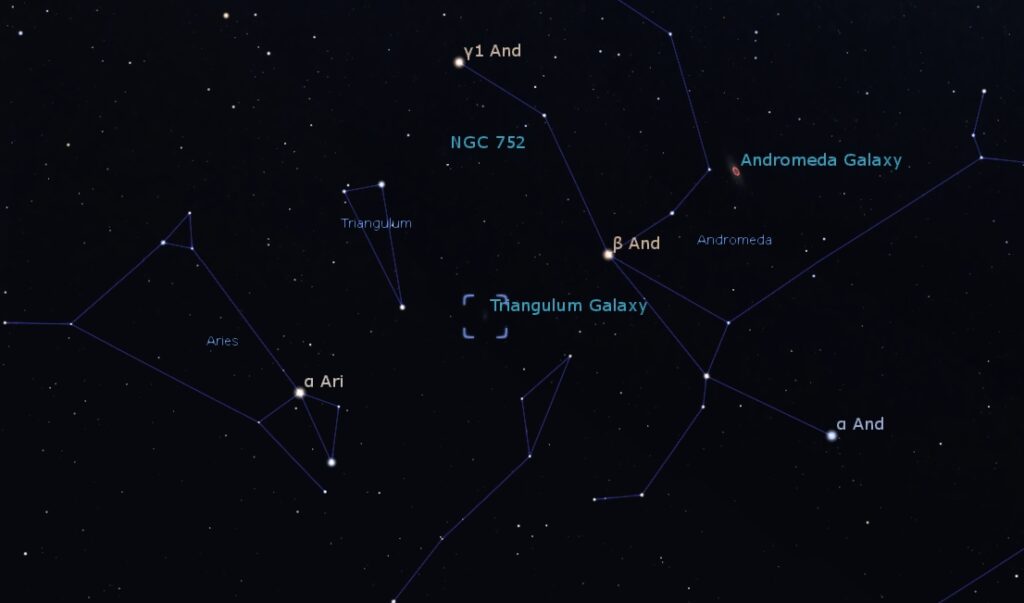 The Triangulum Galaxy is the third-largest member of the Local Group of galaxies, which includes the Andromeda Galaxy and our Milky Way. M33 is one of the most distant objects that can be viewed with the naked eye. 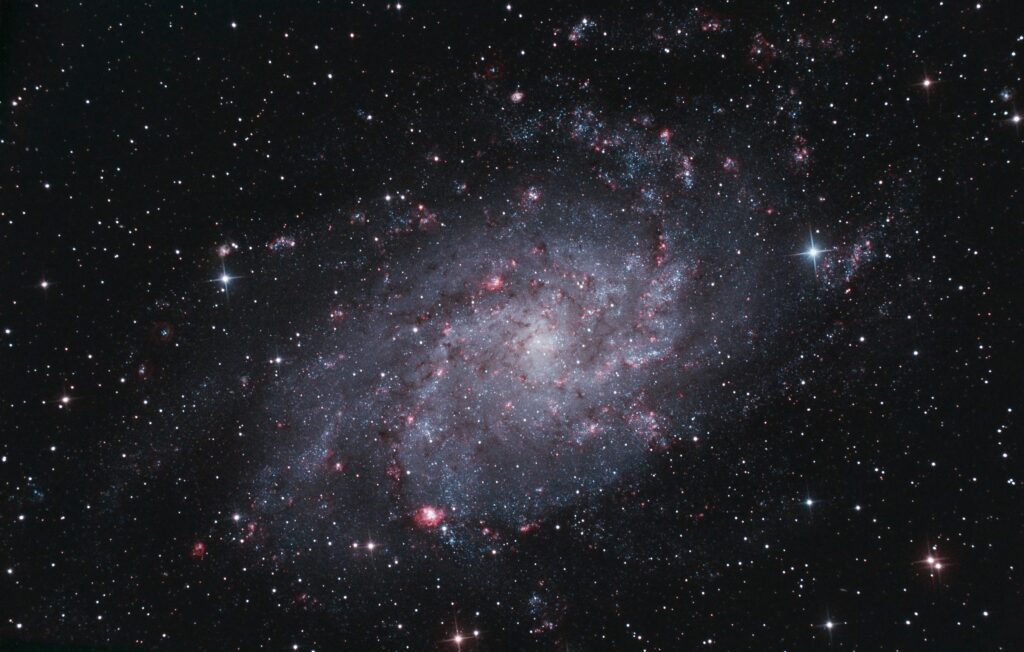 NGC 604 is a large star-birth region within The Triangulum Galaxy. NGC 604 is similar to the Orion Nebula in our Milky Way galaxy, but nearly 100 times larger!

More than 200 bright blue stars ionize the gases within the cloud, which shines with more than 6000 times the luminosity of the Orion Nebula! 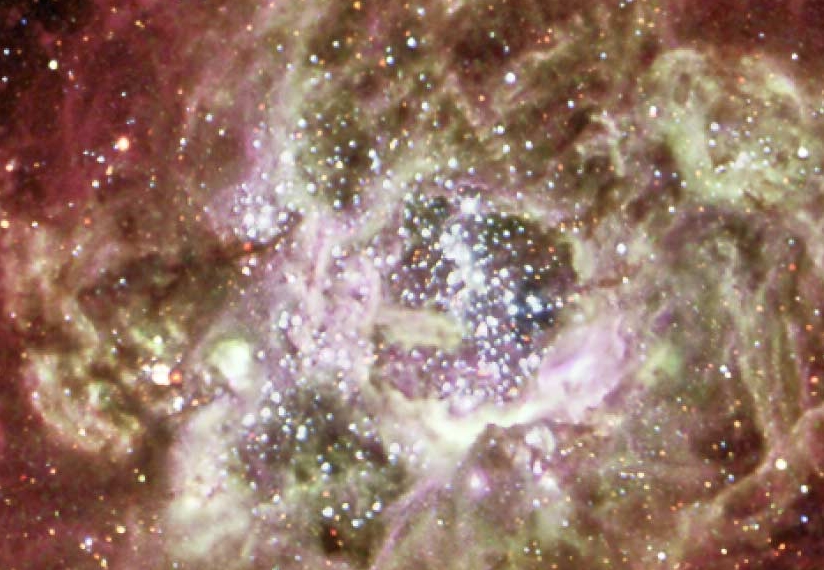 The Sun has been spot-free for 8 days. Coronal holes remain open at both poles – the northern hole appearing much larger than the southern hole; a large blotchy coronal hole is rotating along the Sun’s equator.

“NOAA forecasters say there is a 45% chance of G1-class geomagnetc storms on Dec. 5th when a coronal mass ejection (CME) is expected to hit Earth’s magnetic field. CMEs are rare during solar minimum because their usual launching pads–that is, sunspots–are absent. This one was produced not by a sunspot, but rather by a filament of magnetism erupting from the sun’s southern hemisphere (movie). CMEs are very good at producing auroras, so even a glancing blow could light up the Arctic Circle this Wednesday night.” – SpaceWeather.com

Around the D.C. area on Thursday? Our scientist will be at @librarycongress talking about heliophysics, the science of space. The public talk starts at 11:30 a.m. on Dec. 6: https://t.co/NB01kOnsvt pic.twitter.com/As4b9ofvy3

In this diagram of the inner solar system, all of the fireball orbits from Dec.3, 2018 intersect at a single point–Earth. Source: Spaceweather.com

It finally cleared for a few hours Friday November 30, 2018. Two objects for the night.
Comet 41P/Wirtanen and Supernova 2018 ivc in M77 pic.twitter.com/2FBuC5VLfm

This is the position of the planets and a couple spacecraft in the solar system; the Parker Solar Probe will soon cross the orbit of Venus. 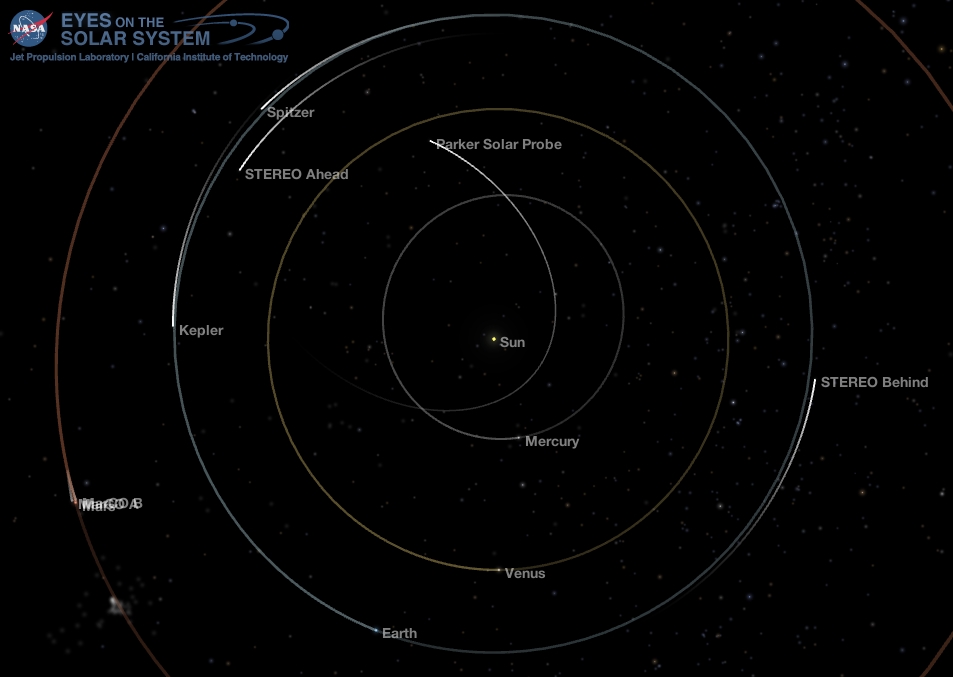 Position of the planets in the inner solar system, Dec. 4, 2018. Credit: NASA Eyes on the Solar System / Bob Trembley. 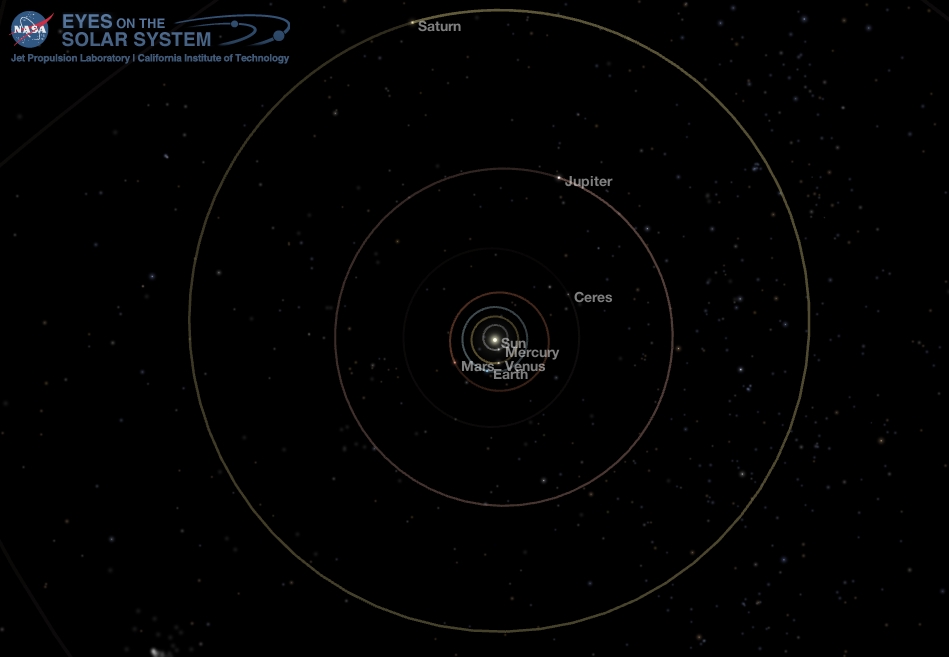 Position of the planets in the middle solar system, Dec. 4, 2018. Credit: NASA Eyes on the Solar System / Bob Trembley.

For the past several months, Bennu has been coming into focus as I approached. Now that I’m here, I’ll fly around the asteroid and study it in detail. All the data I collect will help my team pick a spot to sample in 2020. #WelcomeToBennu ? Details: https://t.co/9pYBuYxA8X pic.twitter.com/CnzVwwRz5n

Mars InSight – HAS THE POWER!

I’m beaming! During my first full day here, I broke my first record by generating more electrical power than any previous robot on the surface of #Mars. I’m in a sandy area with few rocks, soaking up the Sun. ?
More about where I landed: https://t.co/pdZytmWh6E pic.twitter.com/8K9CVM61UG

After 16 years of solar flare observations, we've retired our RHESSI spacecraft. Read about what we've learned from RHESSI's data and how it laid the groundwork for science for years to come: https://t.co/MOzX07nqMh pic.twitter.com/IwPiu09oU9