Yesterday before dawn, while breathing in the smell of brewing coffee, I saw through my kitchen window a thin waning crescent Moon with earthshine; my wife said she saw it on her way to work, and it was just beautiful! This morning, the Moon was lower in the southeastern sky, and Saturn, Mars and Jupiter are spread across the southern sky. The stars Antares and Spica will be accompanying Mars and Jupiter for the next several weeks in the southern predawn sky.

Before dawn, the “W” of Cassiopeia is low in the northern sky. 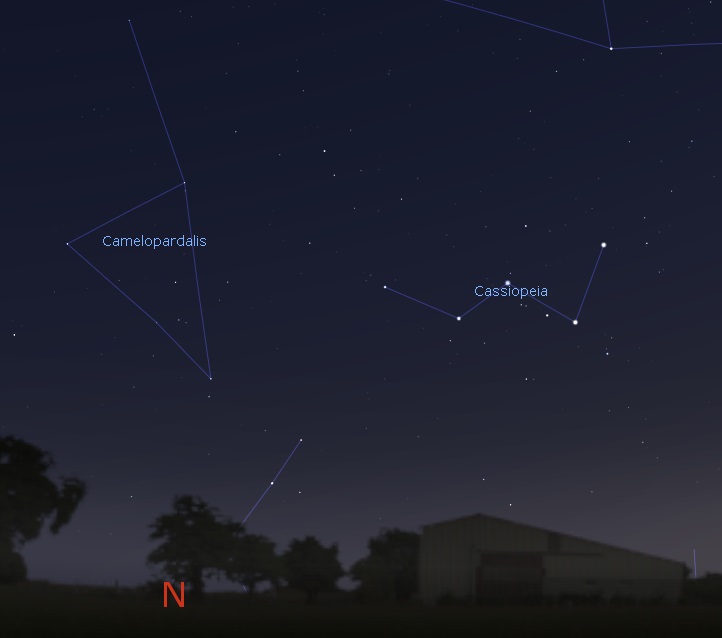 After sunset, Ursa Major and the “Big Dipper” are low in the northern sky. 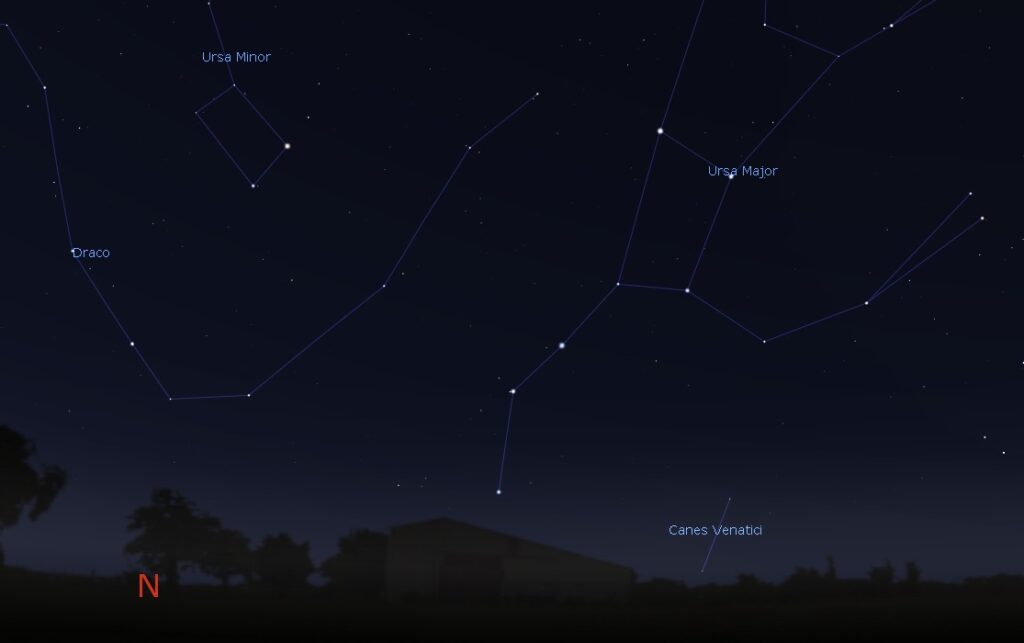 After sunset, Orion and Canis Major – with the bright star Sirius, are in the southern sky. 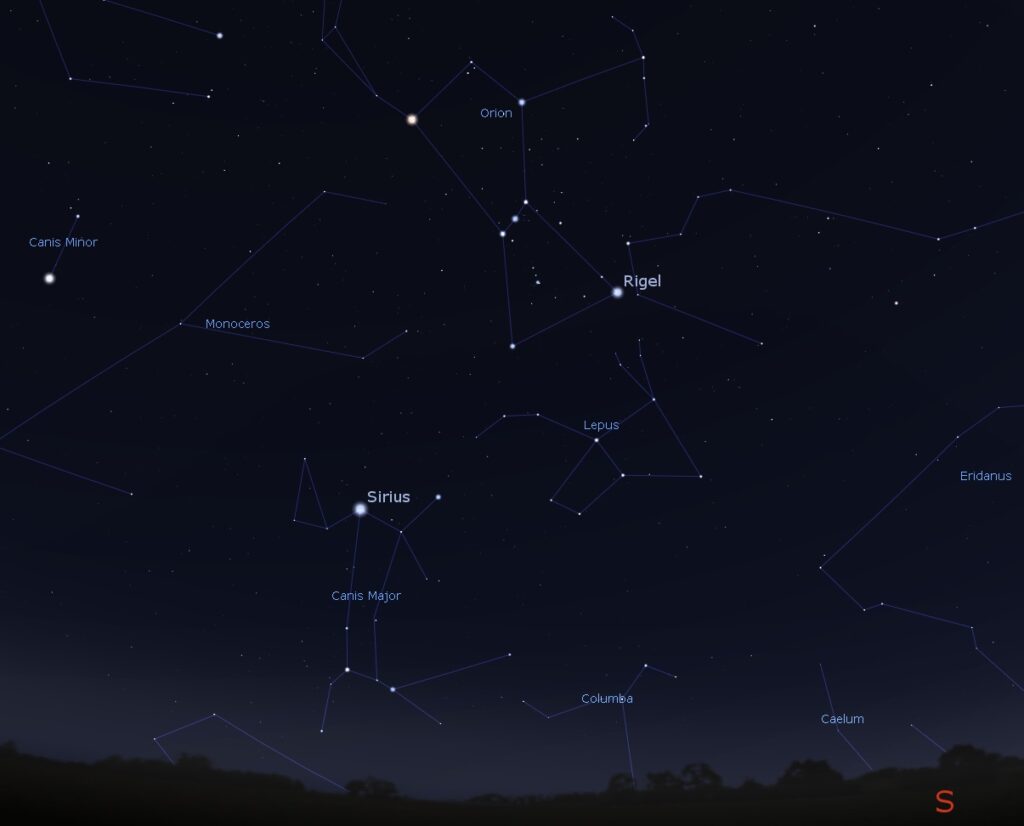 If you arrive home shortly after midnight, Ursa Major, Leo and Gemini will be directly overhead. 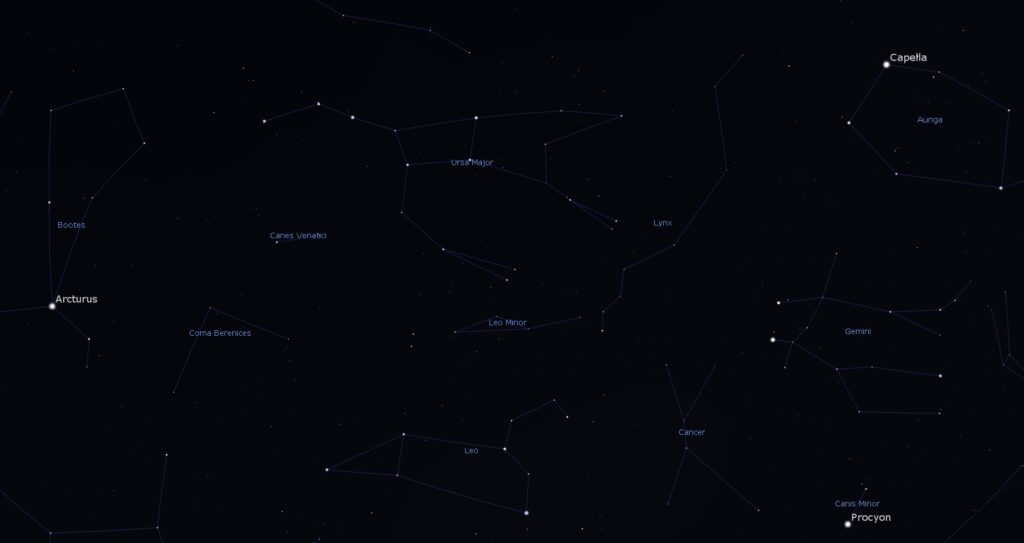 Shortly after midnight, Orion, Canis Major and Taurus will be setting in the west. 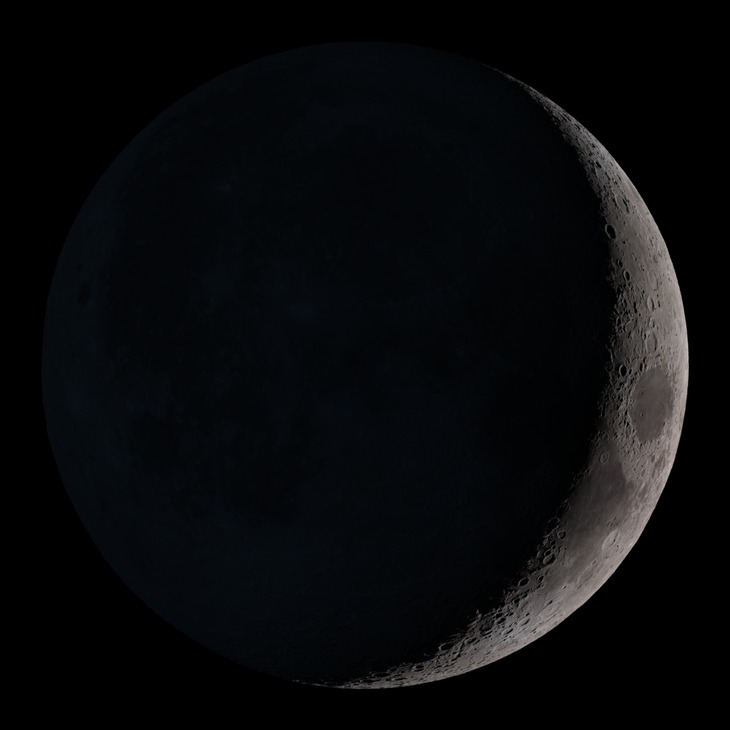 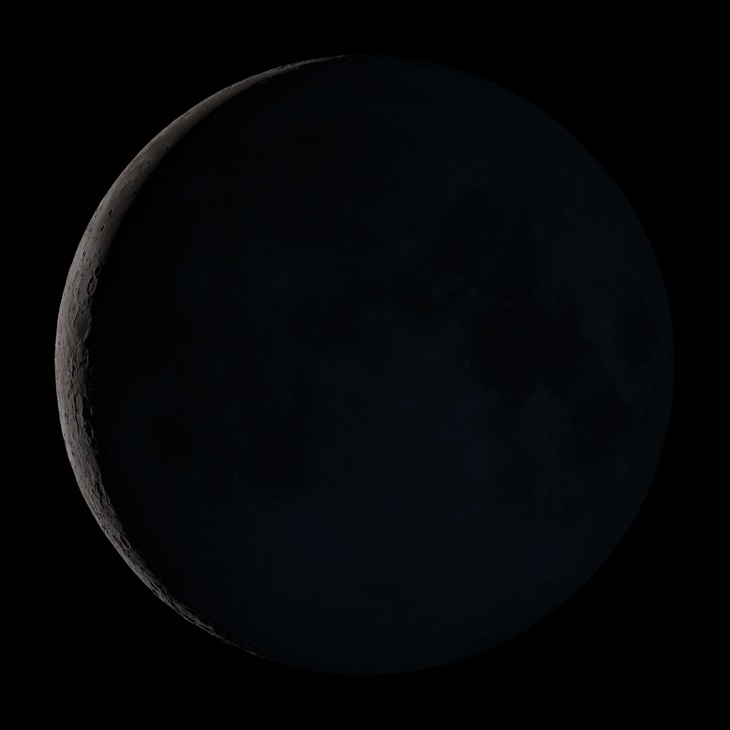 The Moon is a waning crescent in the eastern predawn skies, and will be new on the 15th.

The Moon will reappear as a waxing crescent in the western sky around dusk on the 17th.

The spot on the sun from last week is rotating across the face of the Sun, crackling with C-class solar flares as it goes.

There’s a lot of coronal activity associated with the sunspot, and there were several interesting prominences on the Sun this morning when I looked – so threw together this set of images: 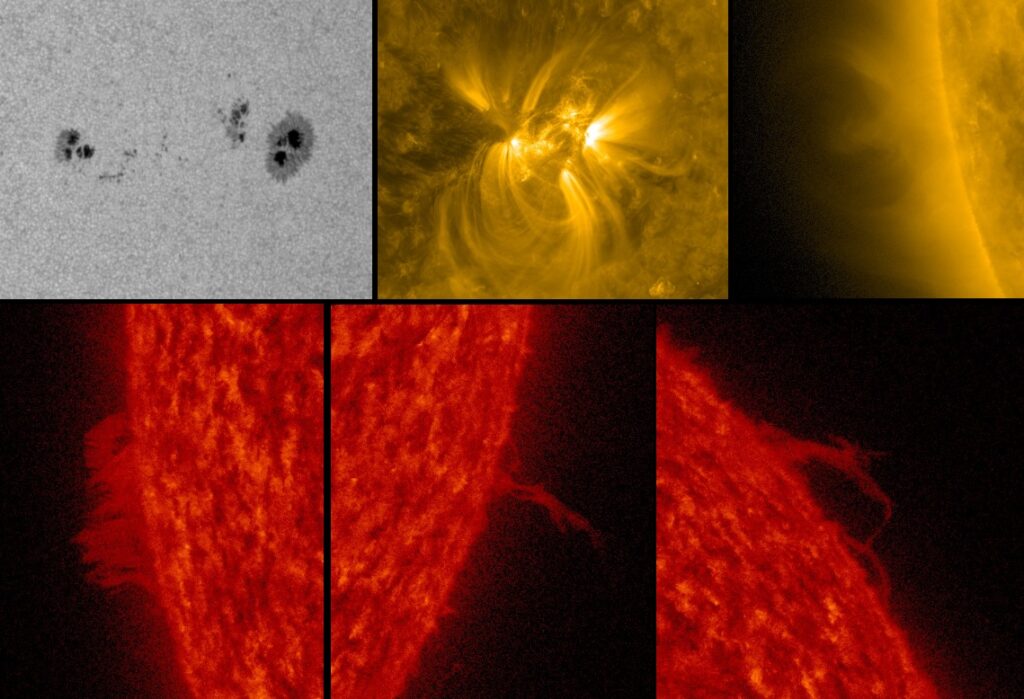 The Best of the Sun Feb. 13, 2018. Images courtesy of NASA/SDO and the AIA, EVE, and HMI science teams / edited by Bob Trembley.

The coronal hole at the Sun’s north pole has all but closed up, and the one at the south pole is smaller than last week, but there’s a  monster hole along the equator that is rotating right towards us. SpaceWeather.com says: “Solar wind flowing from this wide coronal hole is expected to reach Earth on Feb. 15-16 – possibly causing G1-class geomagnetic storms. Arctic sky watchers should be alert for auroras after Valentine’s Day.” The solar wind speed is 315 km/sec, with a density of 2.0 protons/cm3. 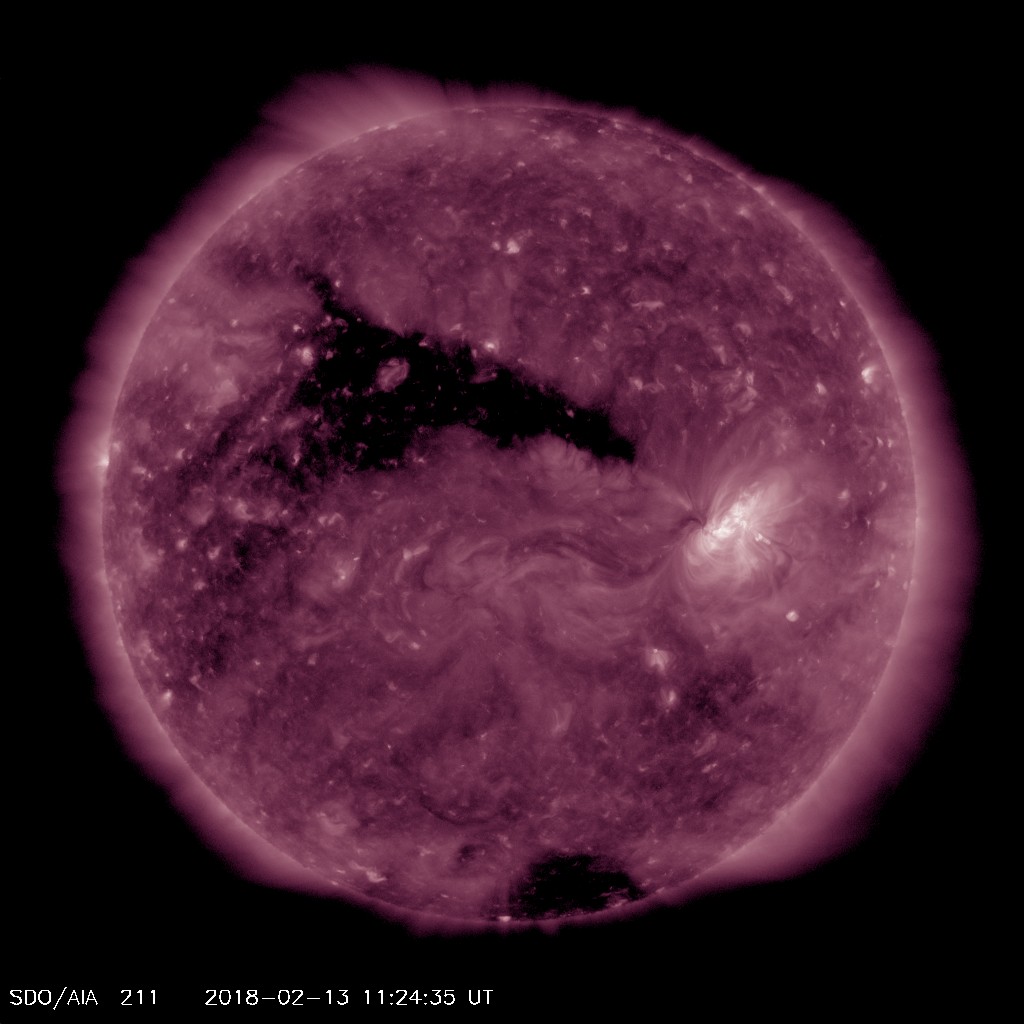 The Sun in 211 angstroms – Feb. 13, 2018. Image courtesy of NASA/SDO and the AIA, EVE, and HMI science teams.
You can view the Sun in near real-time, in multiple frequencies here: SDO-The Sun Now.
You can create your own time-lapse movies of the Sun here: AIA/HMI Browse Data.
You can browse all the SDO images of the Sun from 2010 to the present here: Browse SDO archive. 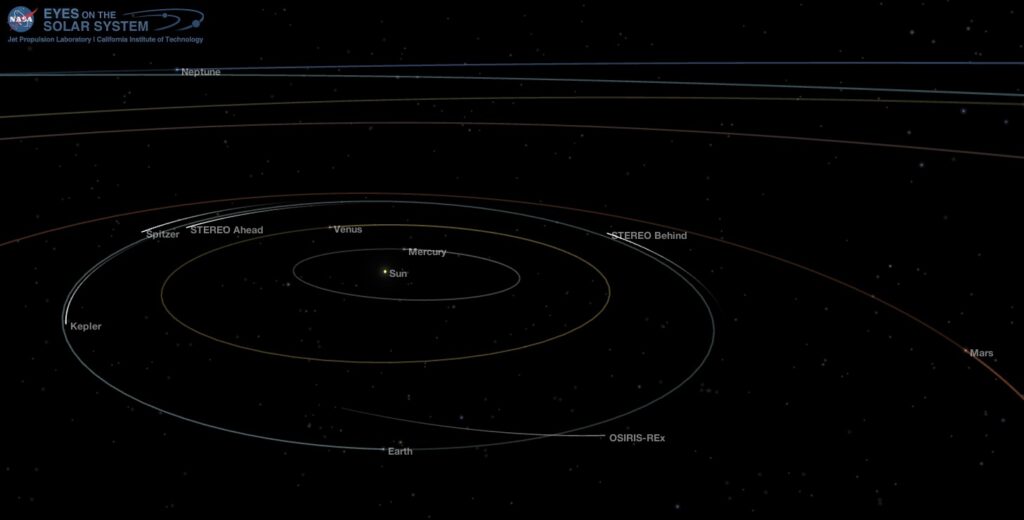 Position of the planets in the solar system, Feb. 13, 2018. Credit: NASA Eyes on the Solar System / Bob Trembley. 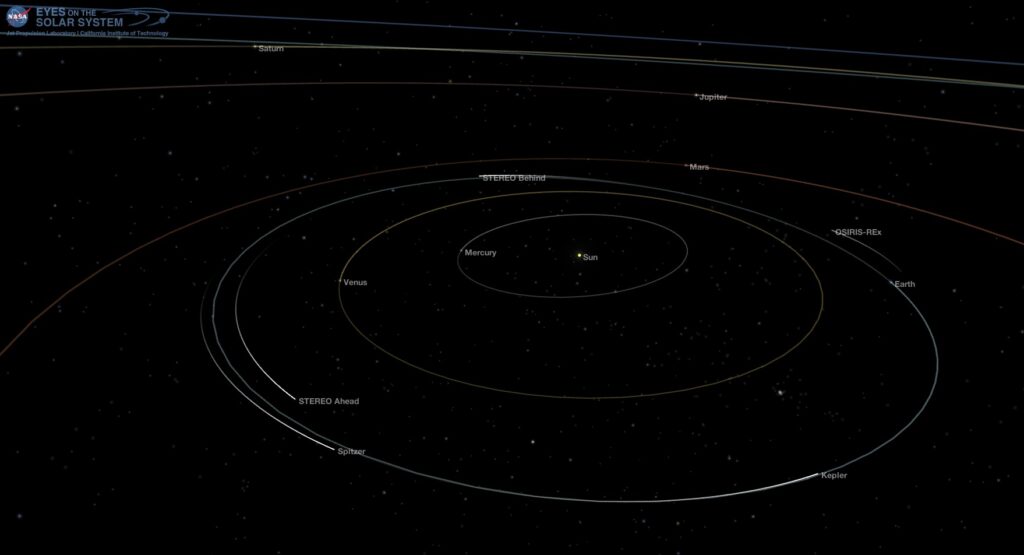 Alternate view of the position of the planets in the solar system, Feb. 13, 2018. Credit: NASA Eyes on the Solar System / Bob Trembley.

The STEREO Ahead and STEREO Behind probes shown on the above solar system images are dual Sun-watching observatories – one orbiting ahead of the Earth, the other trailing behind. This pair of viewpoints allows scientists to see the structure and evolution of solar storms as they blast away from the Sun and move out through the solar system. 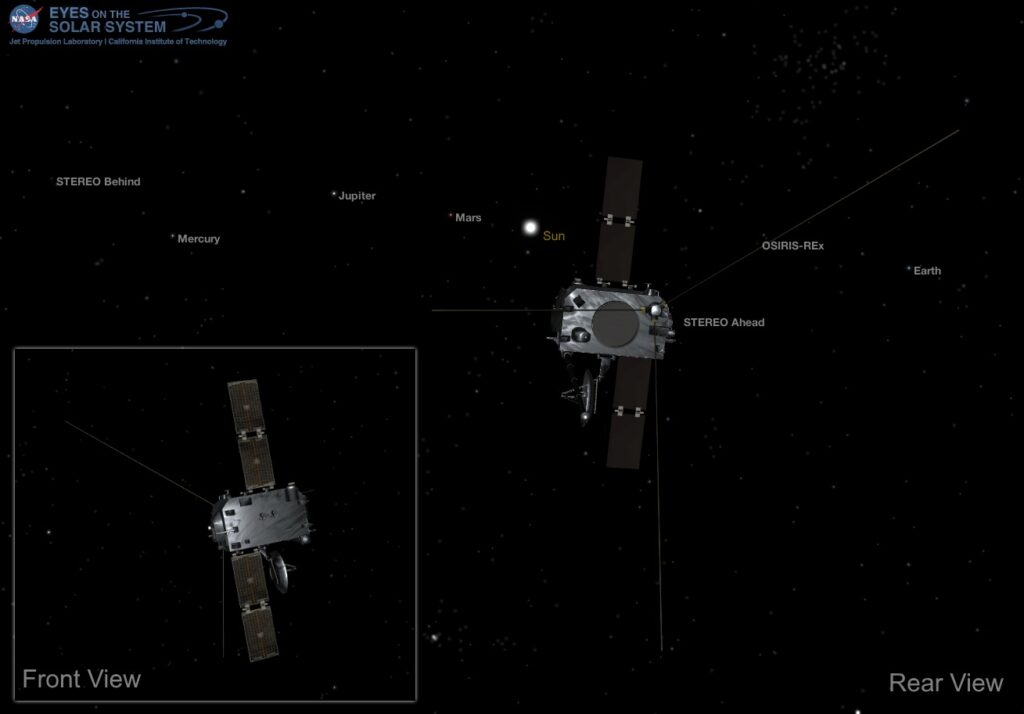