From now through next week, there will be an astounding mega-conjunction of Mercury, Venus, Jupiter and Saturn in the in the east-southeastern sky morning sky. The planets change positions quite a bit each morning, with Venus dancing with Saturn on Feb. 5th and 6th and then with Jupiter on Feb. 11th. Mercury joins the planet party on Feb. 8th, gaining altitude each morning until it appears much higher above the horizon than the other three planets by Feb 16th.

Jupiter and Saturn reappear in the morning sky and do a dance with Venus. Mercury joins the planet party starting on the 8th. Note: Image created with Earth’s atmosphere turned off. Credit: Bob Trembley / Stellarium.

This mega-conjunction would be even better if it was visible to us humans living on the planet, but that pesky atmosphere makes the planets invisible to all but the most determined daytime planet hunters (and I do happen to know some of those).

On Feb. 16th Venus, Jupiter and Saturn are all aligned along the plane of the Ecliptic… and then there’s Mercury – hanging out high above Jupiter.

Venus, Jupiter and Saturn align along the plane of the ecliptic while Mercury appears much higher than the other planets on Feb. 15th. Note: Image created with Earth’s atmosphere turned off. Credit: Bob Trembley / Stellarium.

Seen from this vantage point, Mercury’s orbital inclination is highly evident! Maybe NASA’s SOHO or those living on the ISS will be able to get some real images of the planets during this alignment. 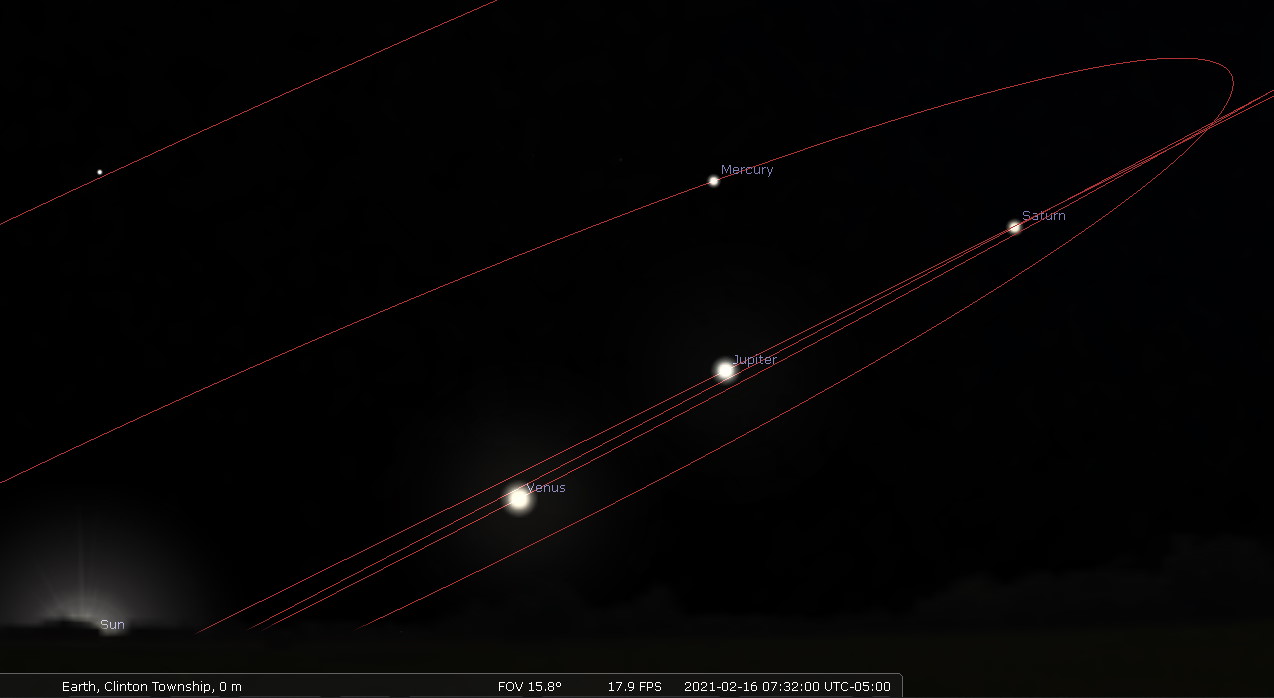 Venus, Jupiter and Saturn align along the plane of the ecliptic, while Mercury’s orbital inclination is highly evident on Feb. 15th. Credit: Bob Trembley / Stellarium.

The third-quarter Moon occurs on Feb.4th – rising around midnight, and is visible to the south after sunrise.

After Feb. 4th, the Moon will be a waning crescent – visible low to the east before sunrise.

This article labels Moon dust as “pesky” – that description may be a little… tame… but it IS interesting to see NASA asking university teams to brainstorm this problem. It will also be interesting to watch those ideas put into action, and how they handle “contact with the enemy.” I’m sure scientists and university students will need to “Science the s**t out of this!” A thought while I’m writing this – I wonder what other international space agencies are thinking/doing about the issue of Moon dust?

We asked university students around the country to help solve the problem of Moon dust as we plan for @NASAArtemis missions.

The Sun has a tiny dual spot that just popped up in the northern hemisphere, and will be soon rotating out of view. Yesterday, Spaceweather.com showed the Sun being spot-free for 4 days. 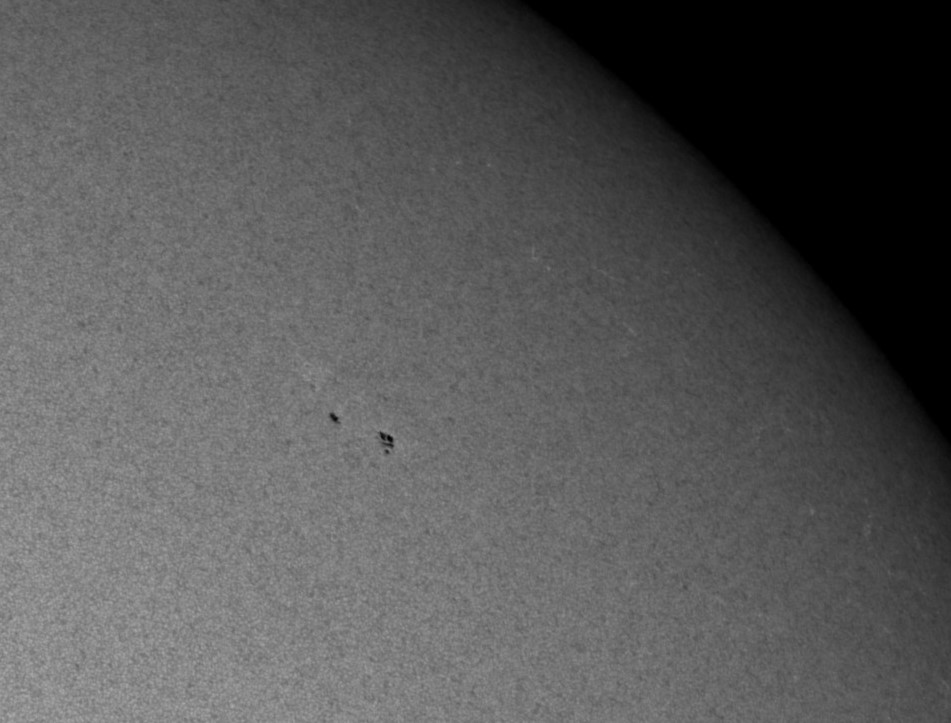 Coronal holes galore! Both polar holes are open – the southern one has a large open portion facing Earthward. Two large and one smaller hole appear on the Sun’s face.

Moderate prominence activity over the last couple days; the prominences on the lower left and right have remained for several days, appearing as a big disconnected cloud, and morphing into multiple loops jumping all around! 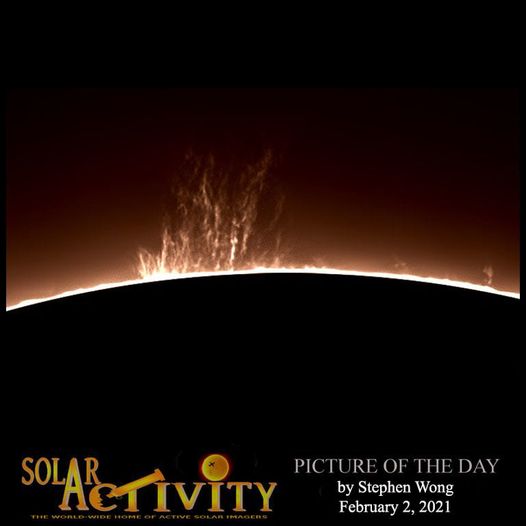 The SOLARACTIVITY PICTURE OF THE DAY for February 2, 2021 is this awesome prominence image by Stephen Wong.

Scientists have gotten a look at the structure inside coronal mass ejections — huge clouds of solar material that explode from the Sun — using data from our Wind mission along with machine learning techniques. More from @NASA_NCCS: https://t.co/VpTYBuG0iW pic.twitter.com/9C5mZqWZAp

I noticed 2020 SO is passing within 0.6 Lunar Diameters – which is pretty close, but its velocity is only 1.8 km/s – which is “pretty slow” compared to most of the other objects buzzing around. I got to wondering what would happen if a 9 meter asteroid hit the Earth going only 1.8 km/s?

Earth has a tiny second moon, known as 2020 SO. But not for long: In two days it will swing past us and break free, returning to an independent orbit around the Sun. https://t.co/eU4jpfbEOt pic.twitter.com/78UNHMgu6B 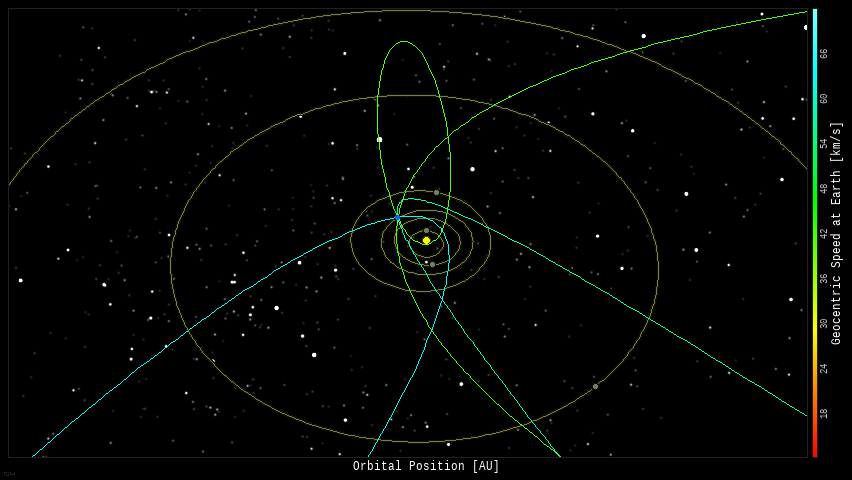 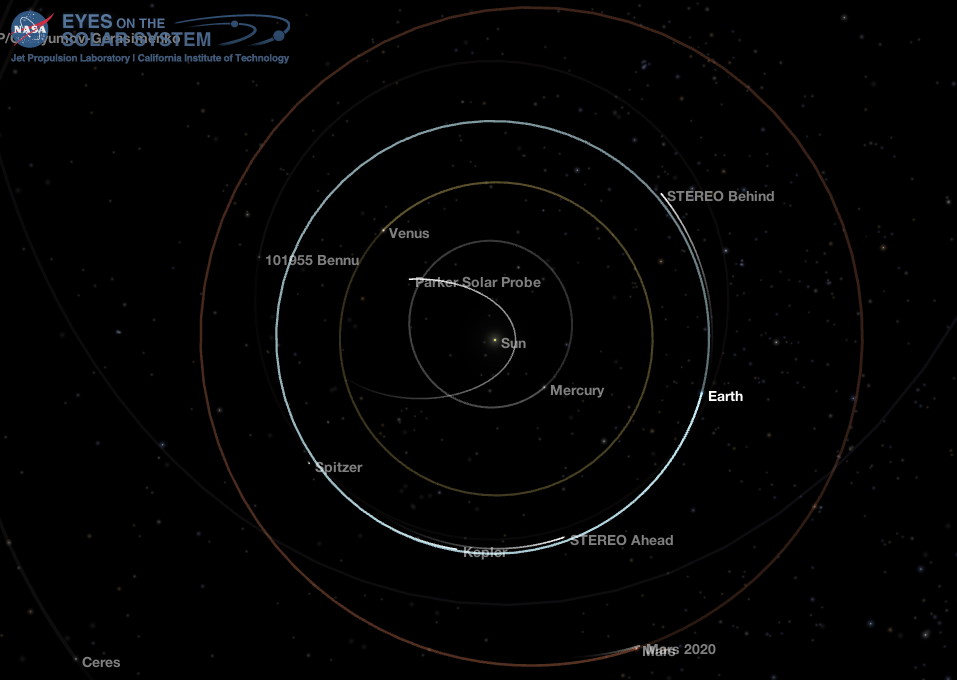 Position of the planets and a couple spacecraft in the inner solar system, 2021-02-02. Credit: Bob Trembley / NASA Eyes on the Solar System. 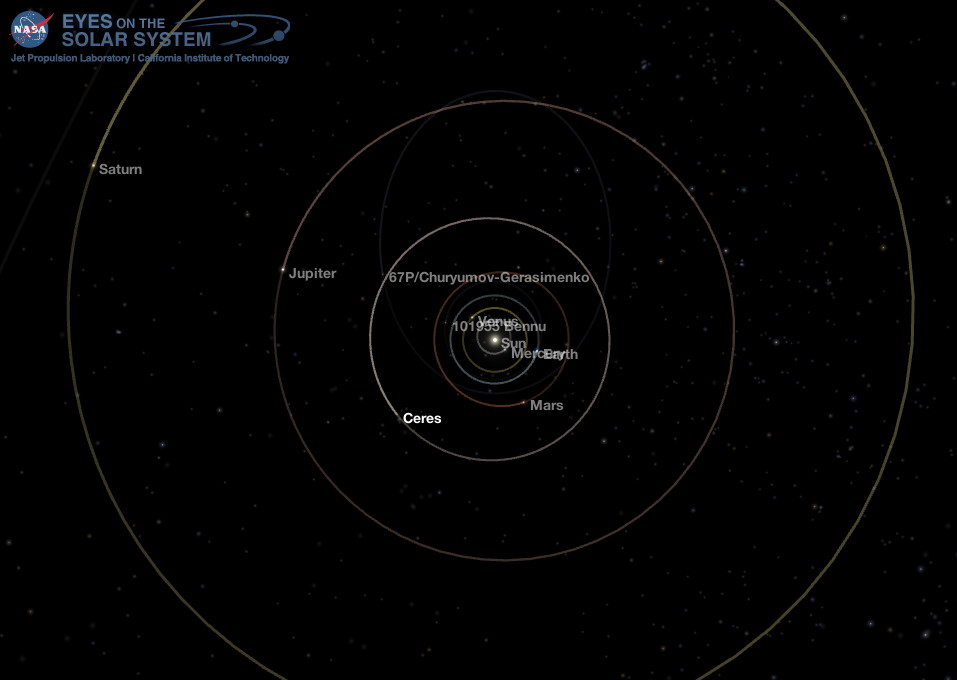 Position of the planets in the middle solar system, 2021-02-02. Credit: Bob Trembley / NASA Eyes on the Solar System. 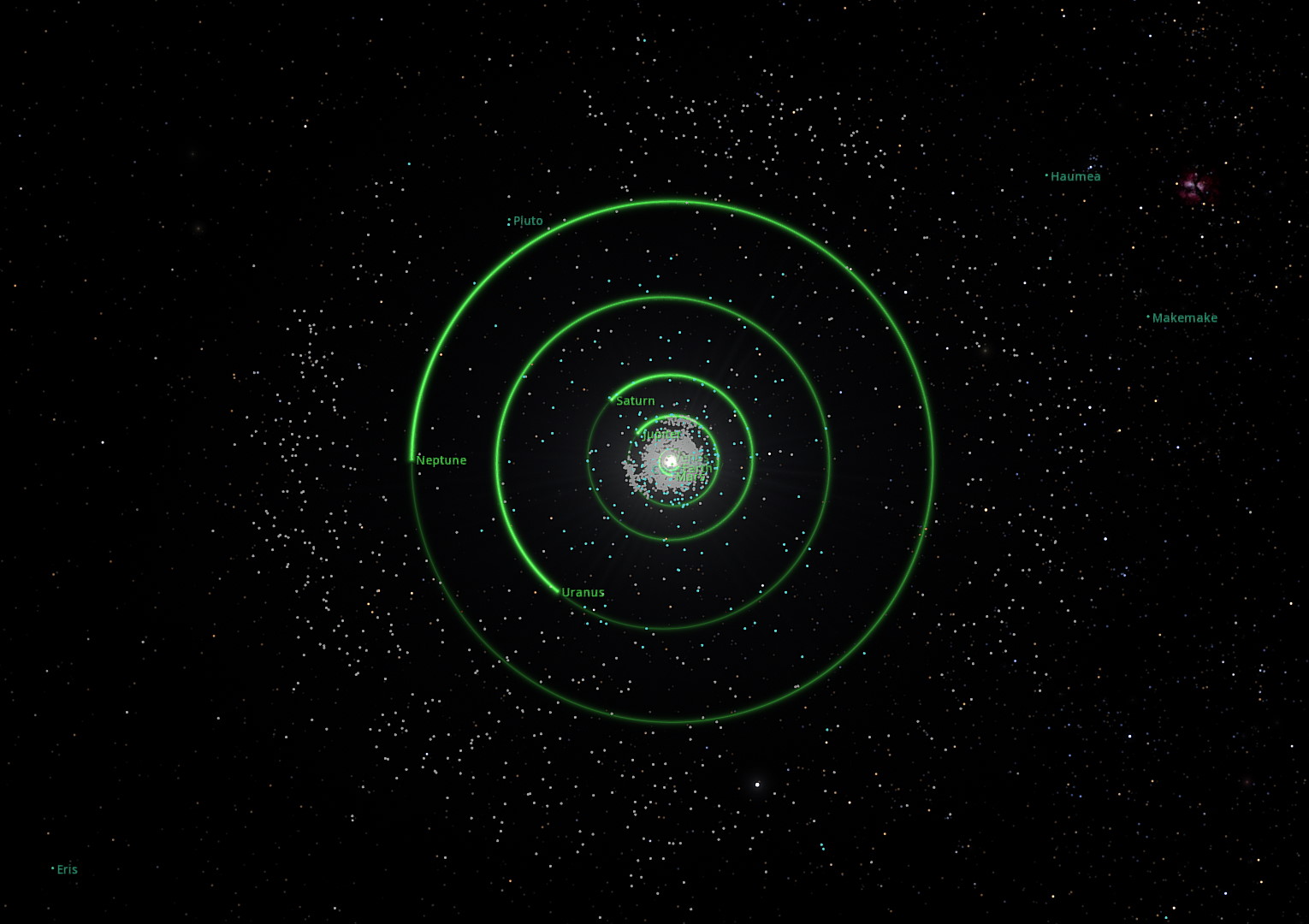 Position of the planets and many transneptunian objects in the outer solar system, 2021-02-02. Credit: Bob Trembley / SpaceEngine.

We're reaching the final days of the #CountdownToMars, but here on Earth, technology created for @NASAPersevere is already benefiting us. Here's how the rover's tools are contributing to geology, pharmaceuticals and more: https://t.co/v3FWtsR1yB pic.twitter.com/SHjy0xIWKr

The battery upgrades at the space station are complete today after eight years of development and 14 spacewalks. https://t.co/OMjNN4lUUG 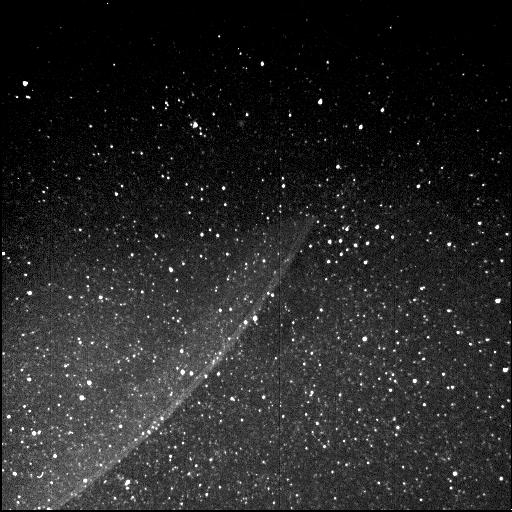 Juno’s Radiation Monitoring Investigation used the Stellar Reference Unit (SRU) star camera to collect this image of Jupiter’s ring — half in Jupiter’s shadow — during Juno’s 13th science orbit on July 16, 2018. The image was collected from a unique high latitude vantage point (55 degrees north latitude) just as Juno flew inside the ring. The bright inner band is Jupiter’s main ring, the halo ring is to its left, and the gossamer rings are to its right. Credit: NASA/JPL-Caltech/SwRI

During the COVID-19 pandemic, the Hubble team has adjusted operations and workflow to keep the mission safe and productive.

Learn how the crews that “fly” the telescope from Hubble’s control center are working these days: https://t.co/xvsN2yOifM pic.twitter.com/memFI1GBSX

UPDATE: Last month's global average concentration of atmospheric carbon dioxide (CO2) was about 415 parts per million (ppm), up roughly 100 ppm (or up 32%) since measurements began in 1958. https://t.co/qjYgQZqqbL

UPDATE: Greenland and Antarctica have been losing ice mass at a combined average rate of 427 billion metric tons (BMT) per year since 2002.

Remember, 1 BMT is about the weight of 14.7 billion people, or about twice that of everyone alive today. https://t.co/ZrlzwqDIeQ