Bright stars and planets are splashed across the southern sky at midnight; Jupiter and Saturn are both great observing targets all night long!

Mars shines bright red in the southern sky before sunrise; Saturn sets in the southwest with the sunrise. 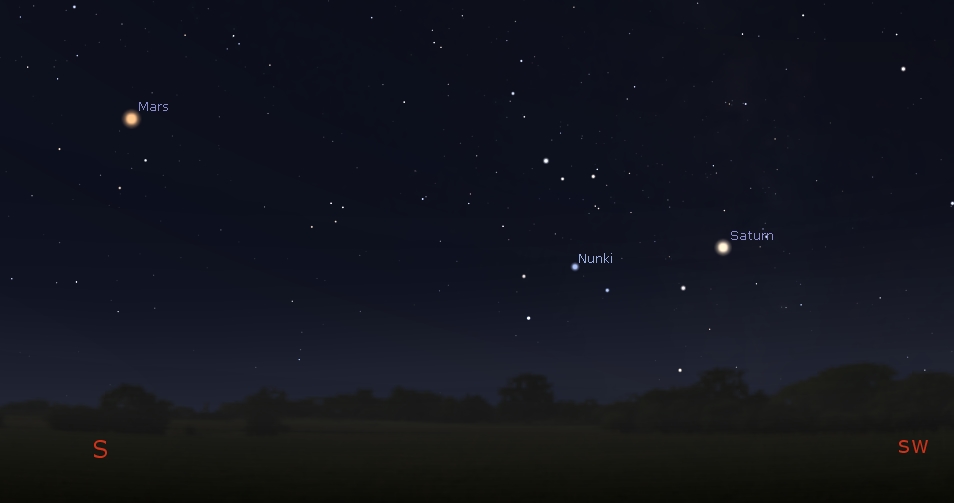 Venus continues its vigil in the west as the evening star; you may be able to catch a glimpse of  Mercury shortly after sunset.

The star Regulus will appear very near Venus after sunset on July 9th. 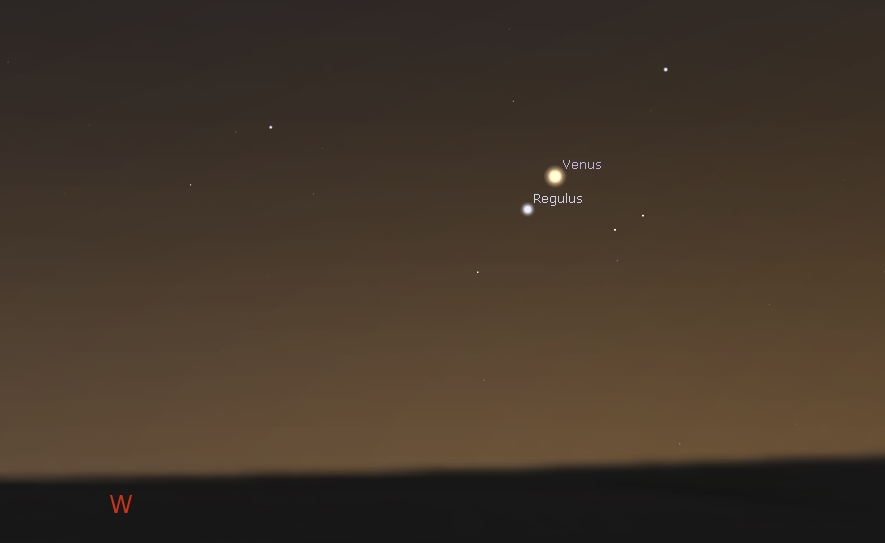 Conjunction of Venus and the star Regulus in the western sky after sunset, July 9, 2018. Credit: Stellarium / Bob Trembley.

The Moon is a waning gibbous heading towards third quarter on July 6th, after which it will be a waning crescent.

The Moon from July 3-July 9, 2018. Visualizations by Ernie Wright

The waning gibbous Moon will appear in the southern sky with Mars on the 3rd and 4th. 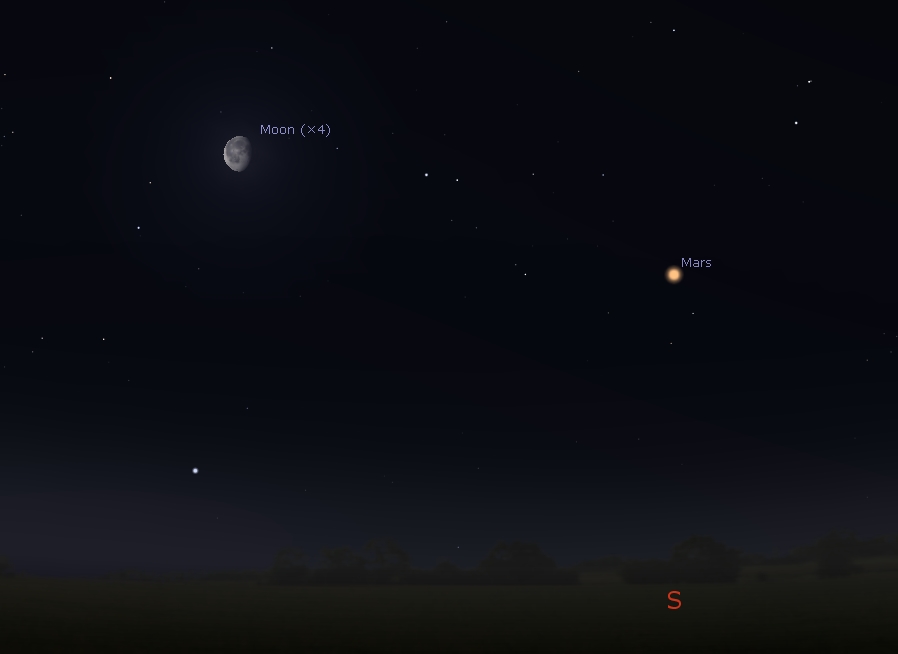 A thin waning crescent Moon will appear in the eastern sky with the Pleiades star cluster before sunrise on July 9th. 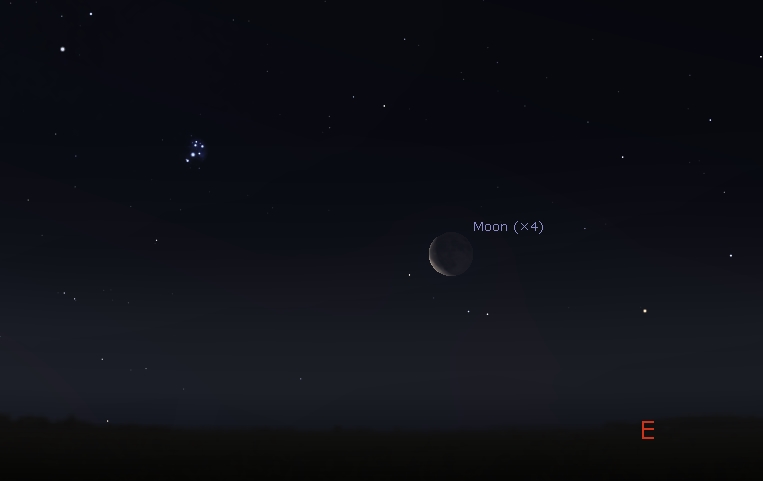 At the head of Cygnus the swan is Albireo, a star whose name it seems, I will always spell wrong… 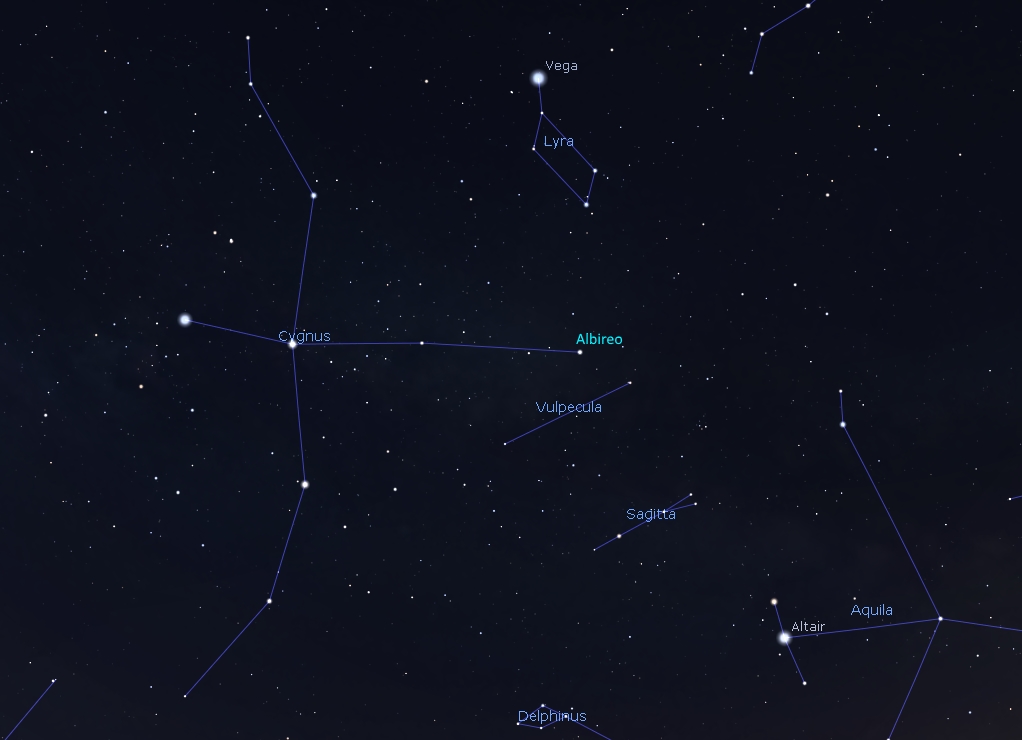 Albireo when viewed through a small telescope appears as a double star with a gold and a striking blue component. 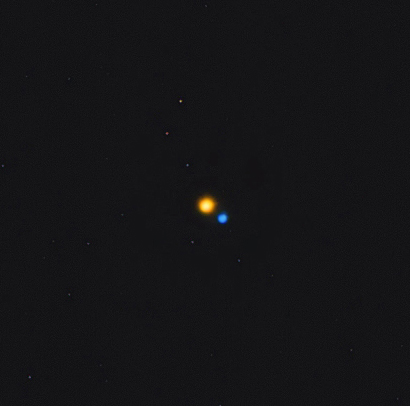 In light-polluted skies, a trick to see the star’s colors better is to slightly de-focus the telescope: 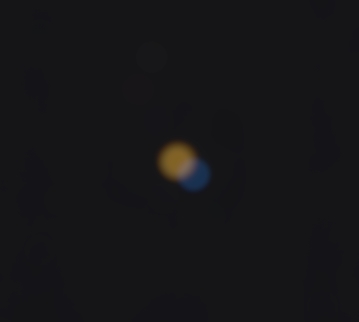 It is unknown if Albireo is a true double star system (as in the image below), or an optical binary – where the two components are not gravitationally bound, and can be physically quite far apart. If Albireo is a true binary, the pair will orbit around a common center-of-gravity called a barycenter, and have an orbital period of around 100,000 years. 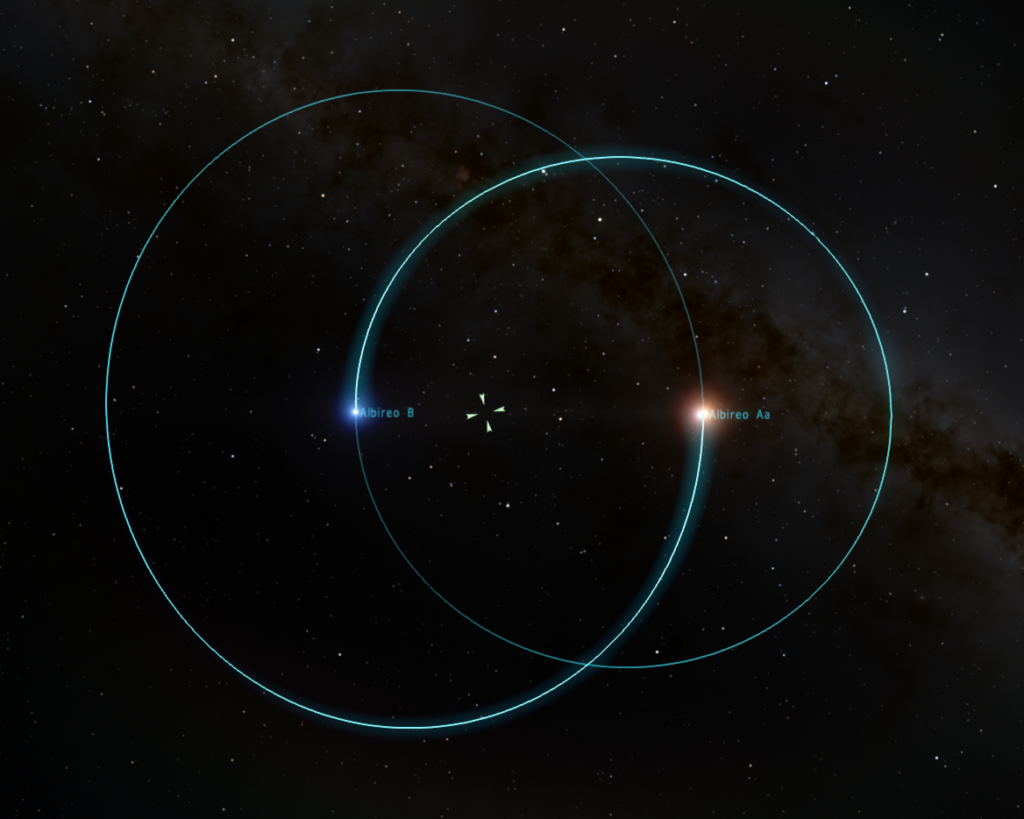 I’m hopeful stellar census data collected the GAIA mission will resolve the issue of Albireo as a binary star.

The Sun as been spot-free for 6 days. The coronal hole at the south pole from last week seems to have closed up, only to be replaced by a large hole at the Sun’s north pole.

SpaceWeather.com says: that “the featureless solar disk is a sign that Solar Minimum is coming…” The solar wind speed is 315.4 km/sec, with a density of 10.1 protons/cm3.

To make up for the lack of sunspots, there have been small prominences everywhere on the Sun’s limb over the last couple days 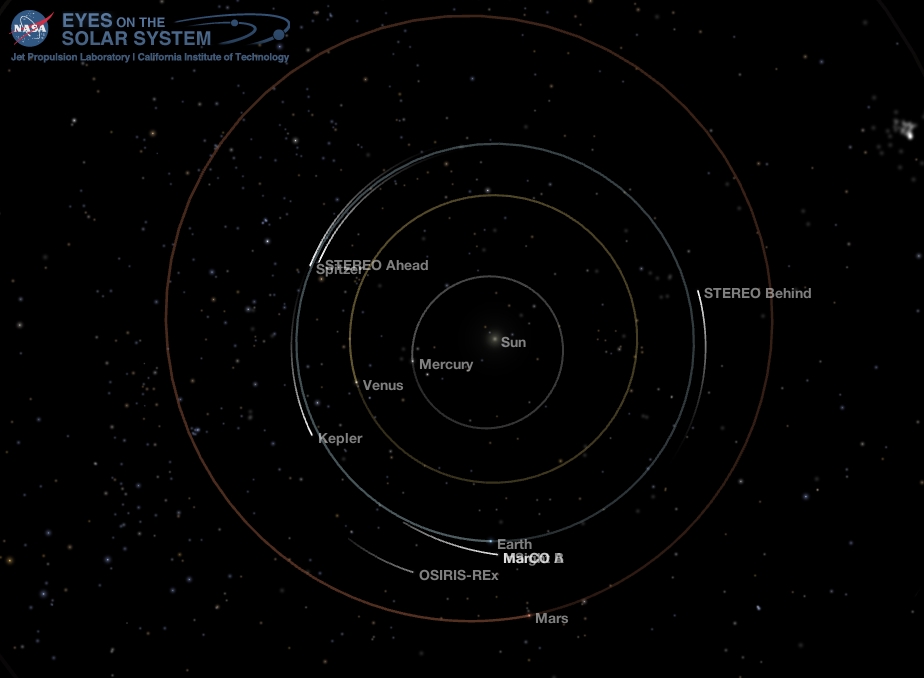 Position of the planets in the inner solar system, July 3, 2018. Credit: NASA Eyes on the Solar System / Bob Trembley. 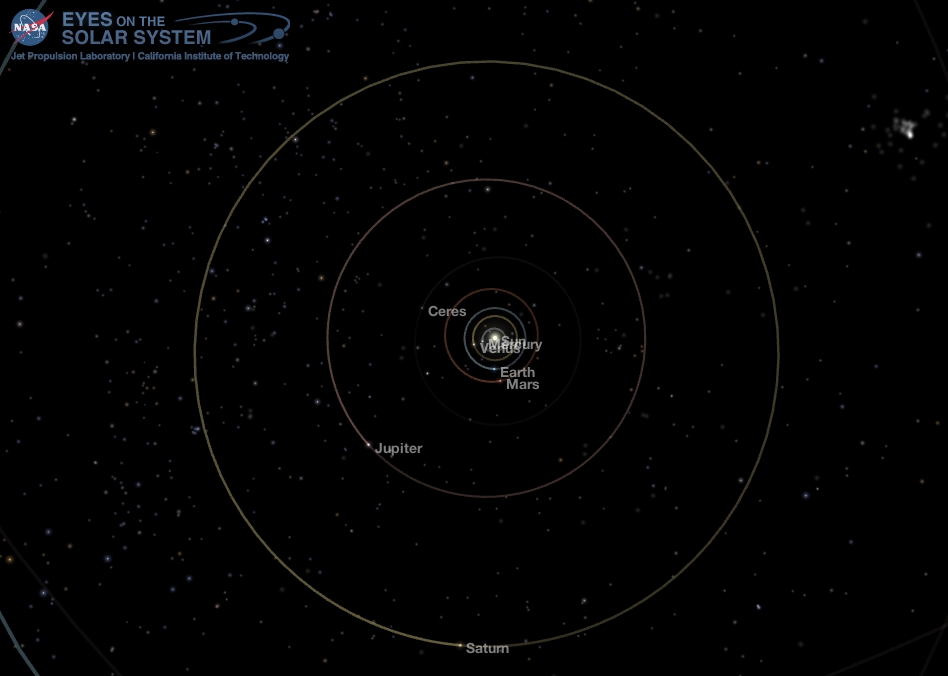 Position of the planets in the middle solar system, July 3, 2018. Credit: NASA Eyes on the Solar System / Bob Trembley. 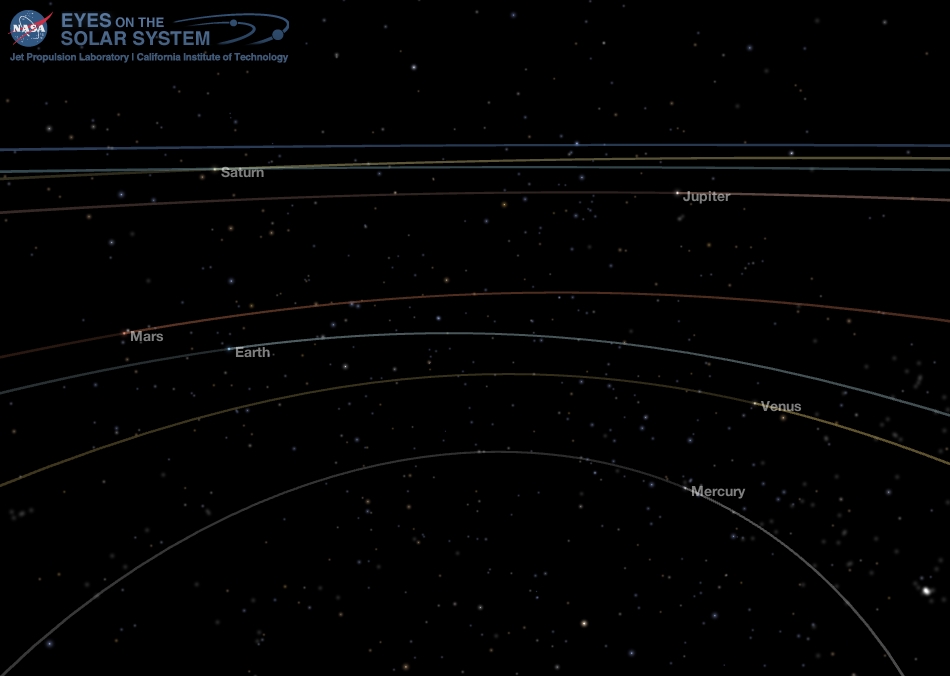 Alternate view of the position of the planets in the inner solar system, July 3, 2018. Credit: NASA Eyes on the Solar System / Bob Trembley.

As I was generating these solar system images, it occurred to me that most of the planets are (more or less) on the same side of the Sun if viewed from a certain angle along the plane of the ecliptic:

Exoplanet of the Week: Kepler-16b 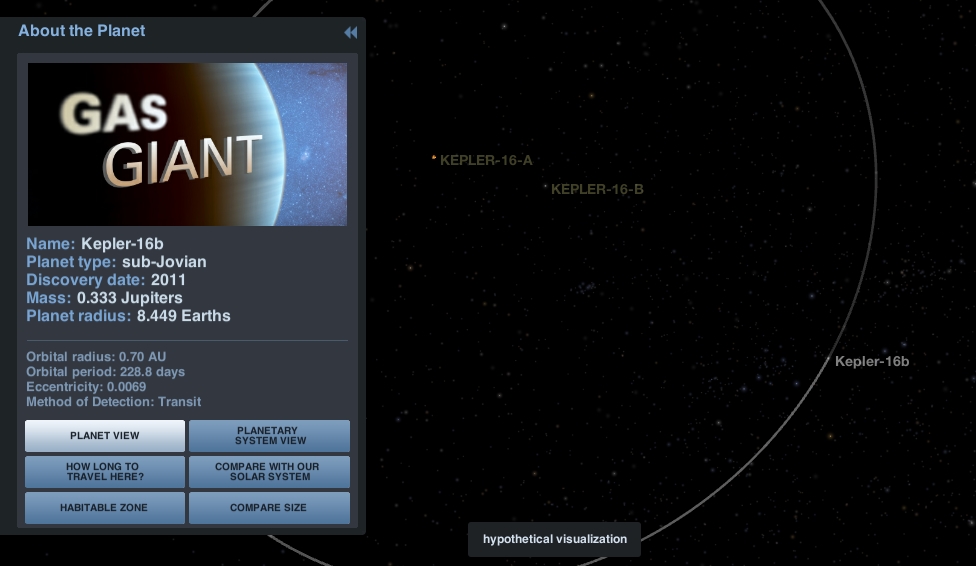 Stellarium: a free open source planetarium app for PC/MAC/Linux. It’s a great tool for planning observing sessions.
NASA Eyes on the Solar System: an immersive 3D solar system and space mission simulator – free for the PC /MAC. I maintain the unofficial NASA Eyes Facebook page.
Space Engine is realistic 3D space simulator; you can travel from star to star, from galaxy to galaxy