Mars opposition happened last week with the Earth overtaking Mars in its orbit; the Earth will now pull ahead of Mars as the distance between the two planets increases over the next several months. Mars will slowly dim, and shrink in size in telescopes, but should still be a good observing target for several weeks.

Jupiter is in the southwestern sky at dusk and sets around 11:30 PM; Saturn is an excellent observing target all night long in the southern sky. 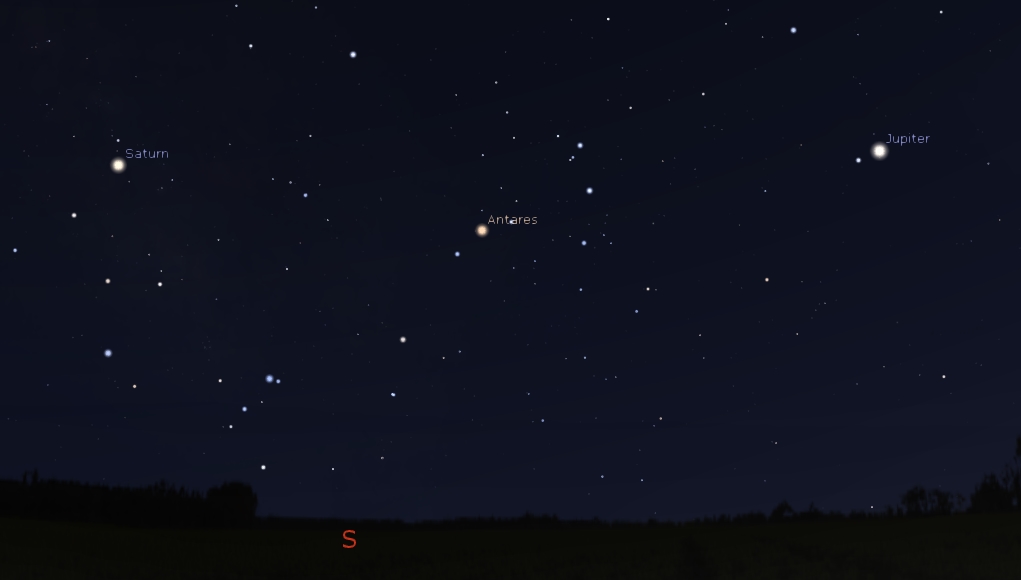 Jupiter continues a slow crawl towards the Venus in the west; Venus appears a bit lower in the western sky each evening. 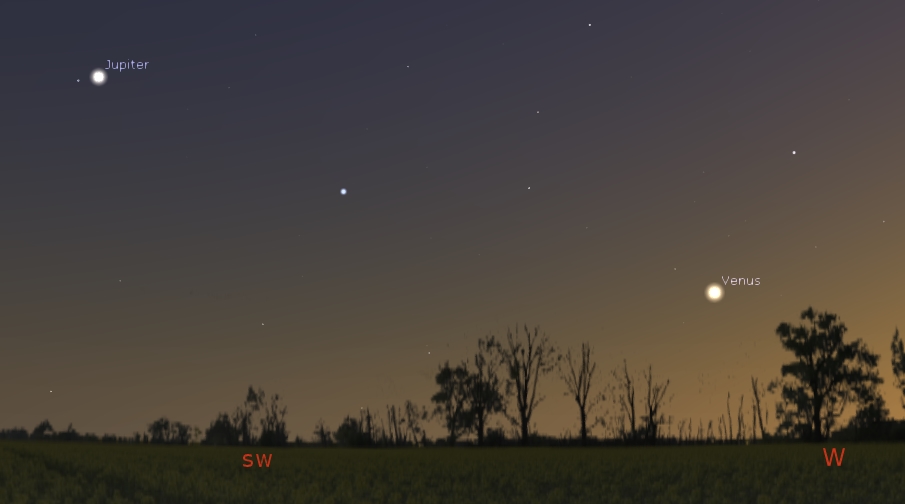 Venus and Jupiter are in the southwestern sky at dusk, July 31, 2018. Credit: Stellarium / Bob Trembley. 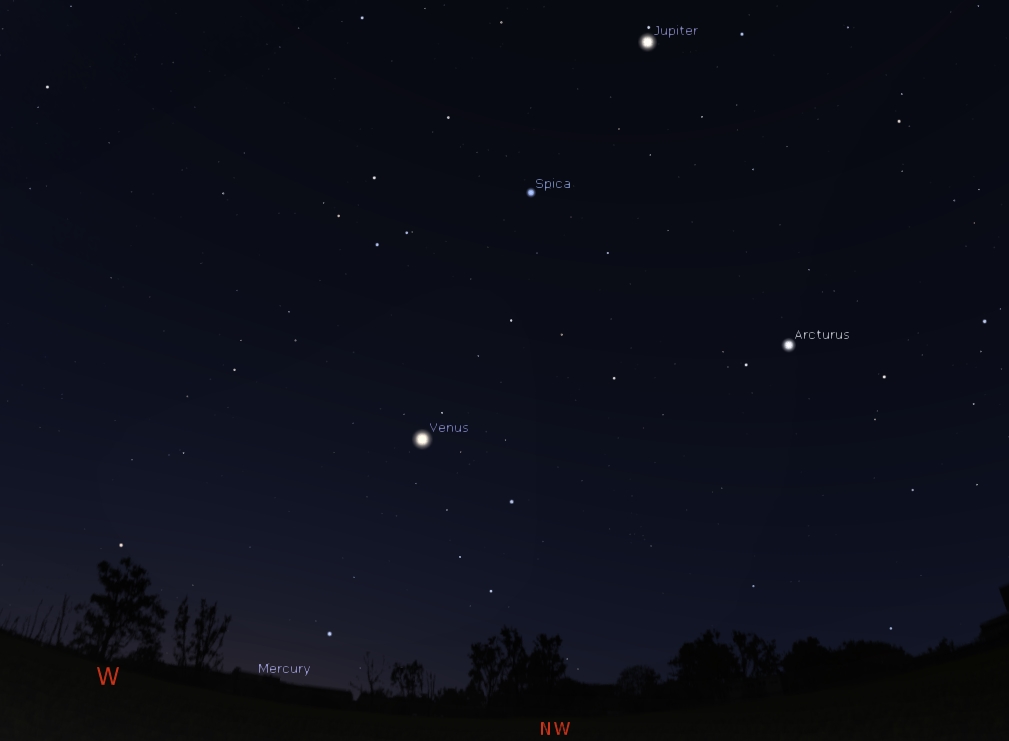 Mars is high in the eastern sky from Montevideo at 5:00 PM on July 31 2018, Saturn appearing much higher and opposite side from Mars as it appears in the northern hemisphere. 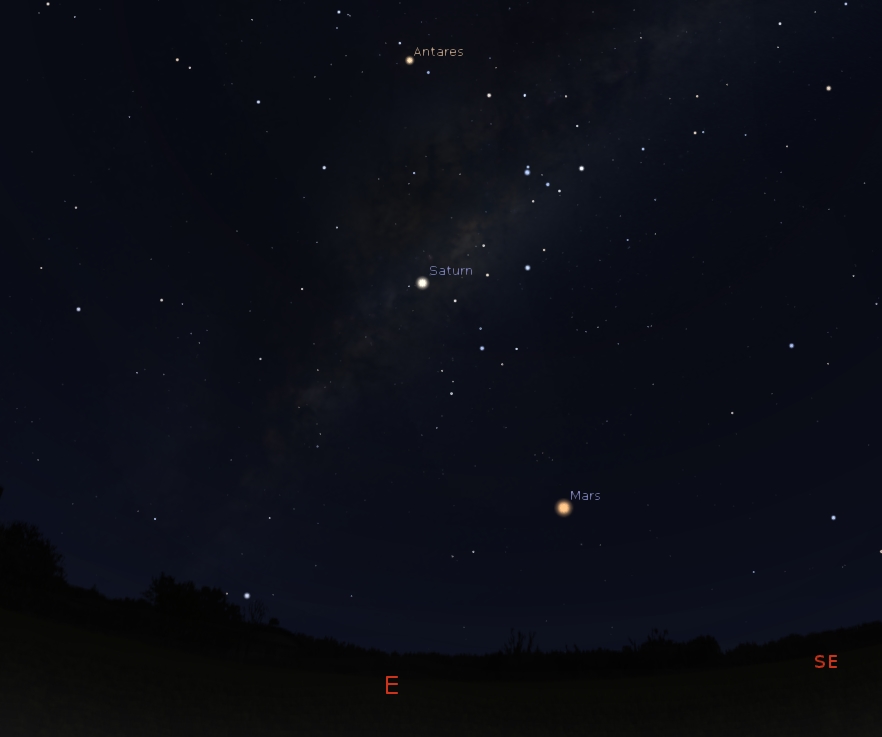 From Montevideo, Uruguay, Mars and Saturn are high in the eastern sky at 5:00 PM July 31 2018. Saturn appears much higher in the sky, and is on the opposite side from Mars than in the northern hemisphere.

The Moon is a waning gibbous, rising after dark and setting in the mid-morning. The Moon will be at third quarter on August 4th, setting around 12:30 PM. After the 4th the Moon will be a waning crescent, visible in the southeastern sky before sunrise.

Mars is just about as close to Earth as it gets – I’m seeing several posts saying that Mars is closer to Earth than it’s been in 15 years. Even though Mars is experiencing a global dust storm, telescopes across the globe will be pointed at Mars, and photos will be taken. Even the Hubble Space Telescope is gazing at Mars:

Image of the week: @NASAHubble’s close-up view of the Mars dust storm. See details at https://t.co/zxNTGLIK1i

Now is a great time to see #Mars for yourself in the night sky. See where and when to look: https://t.co/arcHOPfSKA pic.twitter.com/PqxYjLn0oZ

The Sun as been spot-free for 9 days – an active region with some coronal loops activity is rotating into view. There is a HUGE coronal hole at the north pole, and the hole at the south pole appears to have diminished quite a bit. There are a couple small equatorial holes within a boiling region where it appears holes are trying to form and connect.

SpaceWeather.com says: “The sun has been without sunspots for 33 of the past 34 days. To find a similar stretch of blank suns, you have to go back to 2009 when the sun was experiencing the deepest solar minimum in a century. Solar minimum has returned, bringing extra cosmic rays, long-lasting holes in the sun’s atmosphere, and strangely pink auroras.”

Some nice-sized prominence activity on the Sun over the last couple days; that active region I mentioned above appears as the bright orange area below. 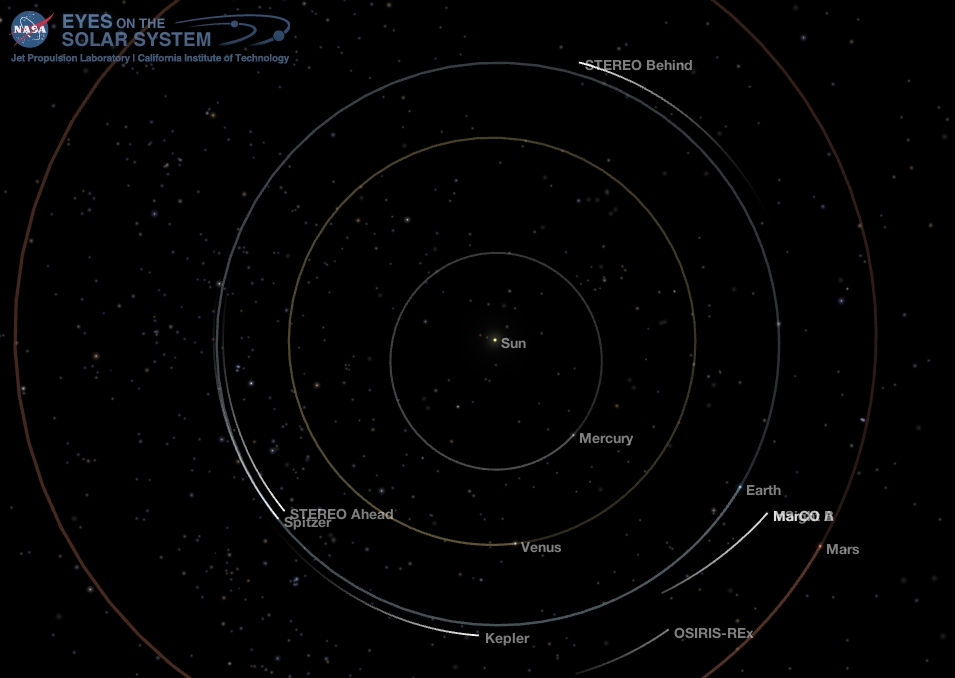 Position of the planets in the inner solar system – a few days after Mars opposition – July 31, 2018. Credit: NASA Eyes on the Solar System / Bob Trembley.