This is “Conjunction Week” with the Moon appearing near the star Spica, Jupiter and Saturn over the next several days. I thought I’d give the southern hemisphere a bit of love this week, so I included several images of the skies from the Paranal Observatory in Chile – Stellarium made it easy to find them when I was looking for a location. I’m also featuring the the Large Magellanic Cloud as this week’s observing target, and I’m glad I did because I learned a lot about it I was unaware of… so yea!

ESO’s Paranal Observatory is located 2635 metres above sea level in the Atacama Desert of Chile. It is one of the best astronomical observing sites in the world, and is the flagship facility for European ground-based astronomy. It hosts several world-class telescopes; among them are the Very Large Telescope, the Visible and Infrared Survey Telescope for Astronomy, and the VLT Survey Telescope. Credit: ESO

Saturn and Jupiter remain high in the southern sky all week around midnight, making great observing targets for night owls. 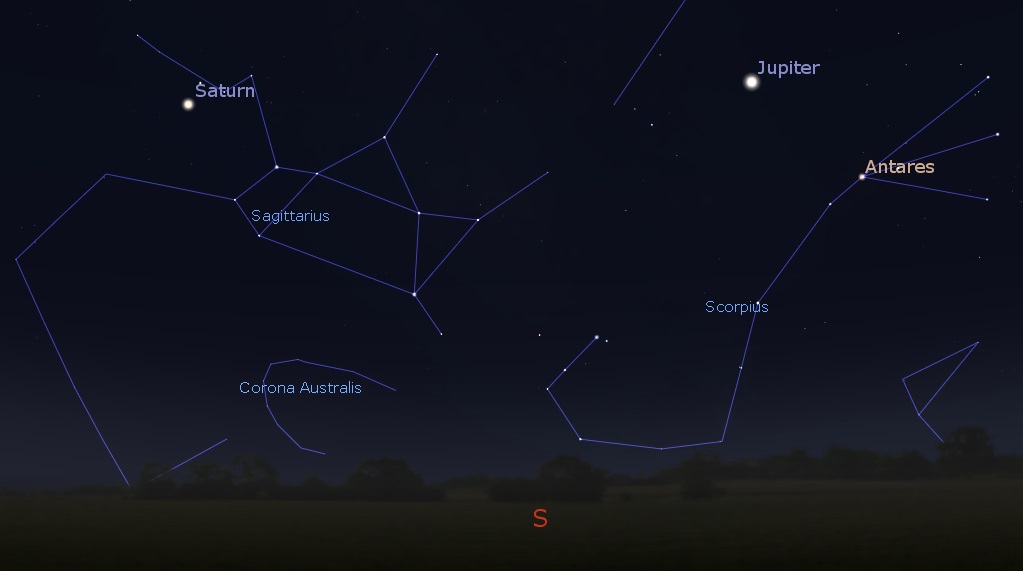 Saturn and Jupiter are high in the southern sky around midnight all week. Credit: Stellarium / Bob Trembley.

Seen from the Paranal Observatory in Chile, Saturn and Jupiter are directly overhead around midnight. 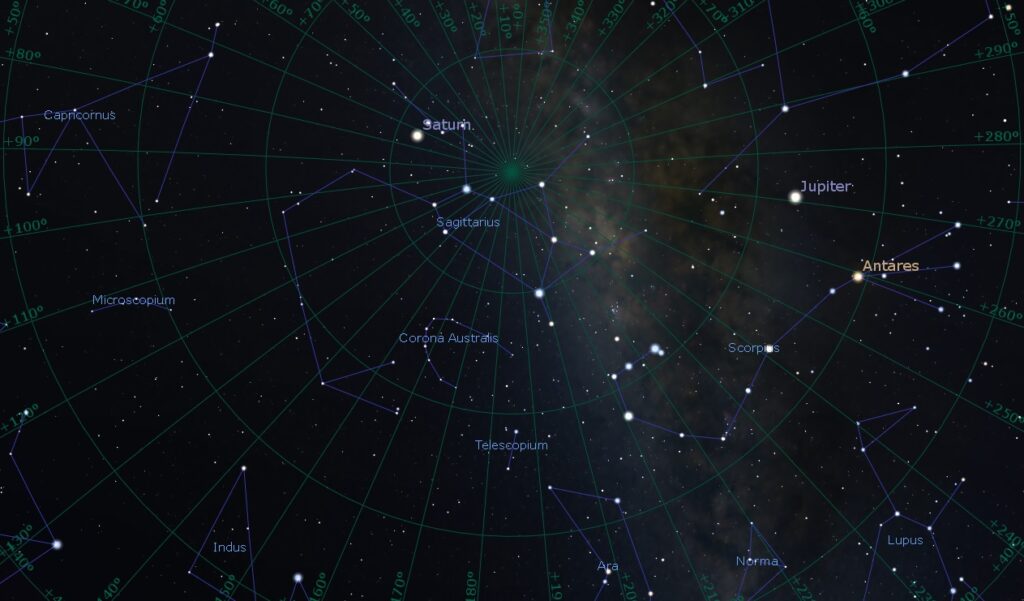 Saturn and Jupiter overhead around midnight seen from Paranal Observatory in Chile. In this image the equatorial grid is shown, and light pollution levels are set low. Credit: Stellarium / Bob Trembley.

The constellations Orion and Taurus in the eastern sky seen from Paranal Observatory in Chile around 6:00 AM. Credit: Stellarium / Bob Trembley.

The Moon will appear near the star Spica in the southwestern sky at 11:00 PM on July 9th. 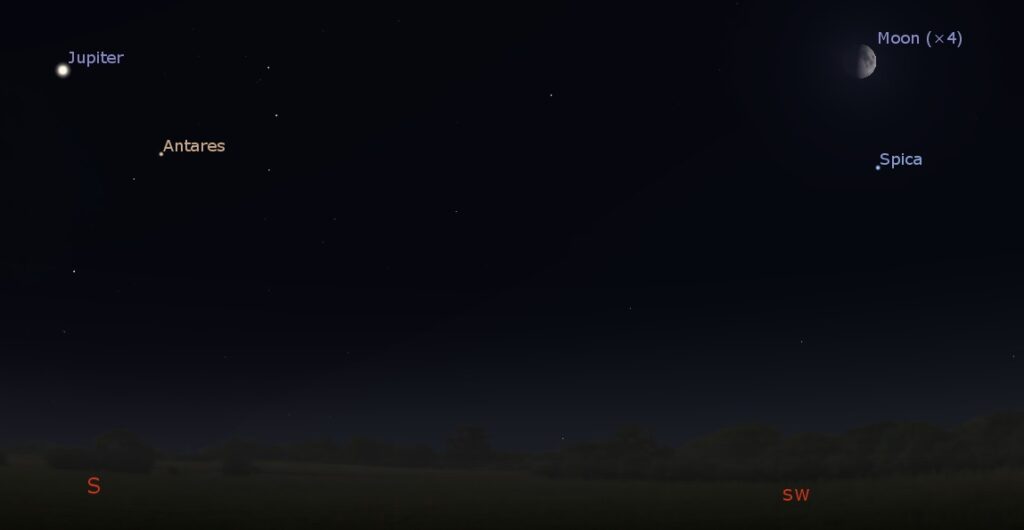 The Moon near the star Spica in the southwestern sky at 11:00 PM on July 9th. Credit: Stellarium / Bob Trembley.

Seen from Paranal Observatory in Chile, the Moon and Spica are directly overhead at 5:00 PM. 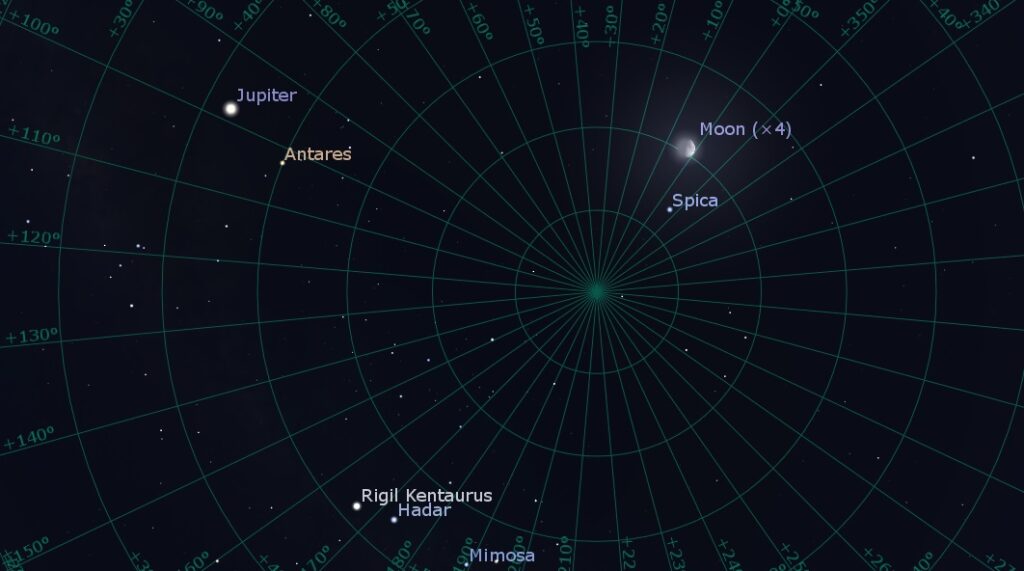 The Moon and Jupiter overhead around 5:00 PM seen from Paranal Observatory in Chile. In this image the equatorial grid is shown. Credit: Stellarium / Bob Trembley.

The Moon appears near Jupiter and the star Antares on July 12th and 13th around 11:00 PM.

The Moon will appear very near Saturn high in the southeastern sky on July 15th. 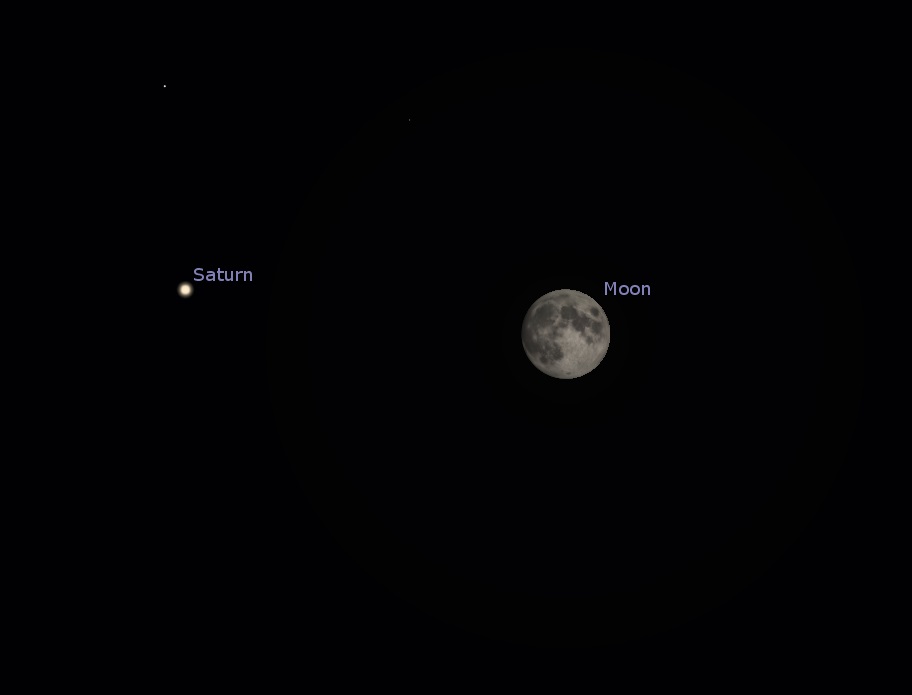 Conjunction of the Moon and Saturn high in the southeastern sky at 11:00 PM on July 15th. Credit: Stellarium / Bob Trembley.

Venus appears very low towards the northeastern horizon just before sunrise; Venus is closer to the horizon each morning.

The Large Magellanic Cloud (LMC) is a satellite galaxy of the Milky Way. At a distance of about 50 kiloparsecs (≈163,000 light-years), the LMC is the second- or third-closest galaxy to the Milky Way, after the Sagittarius Dwarf Spheroidal (~16 kpc) and the possible dwarf irregular galaxy known as the Canis Major Overdensity. Based on readily visible stars and a mass of approximately 10 billion solar masses, the diameter of the LMC is about 14,000 light-years (4.3 kpc), making it roughly one one-hundredth as massive as the Milky Way. This makes the LMC the fourth-largest galaxy in the Local Group, after the Andromeda Galaxy (M31), the Milky Way, and the Triangulum Galaxy (M33).

The LMC is classified as a Magellanic spiral. It contains a stellar bar that is geometrically off-center, suggesting that it was a barred dwarf spiral galaxy before its spiral arms were disrupted, likely by tidal interactions from the Small Magellanic Cloud (SMC), and the Milky Way’s gravity.

With a declination of about -70°, the LMC is visible as a faint “cloud” only in the southern celestial hemisphere and from latitudes south of 20° N, straddling the border between the constellations of Dorado and Mensa, and appears longer than 20 times the Moon‘s diameter (about 10° across) from dark sites away from light pollution.

The Milky Way and the LMC are expected to collide in approximately 2.4 billion years. – Wikipedia 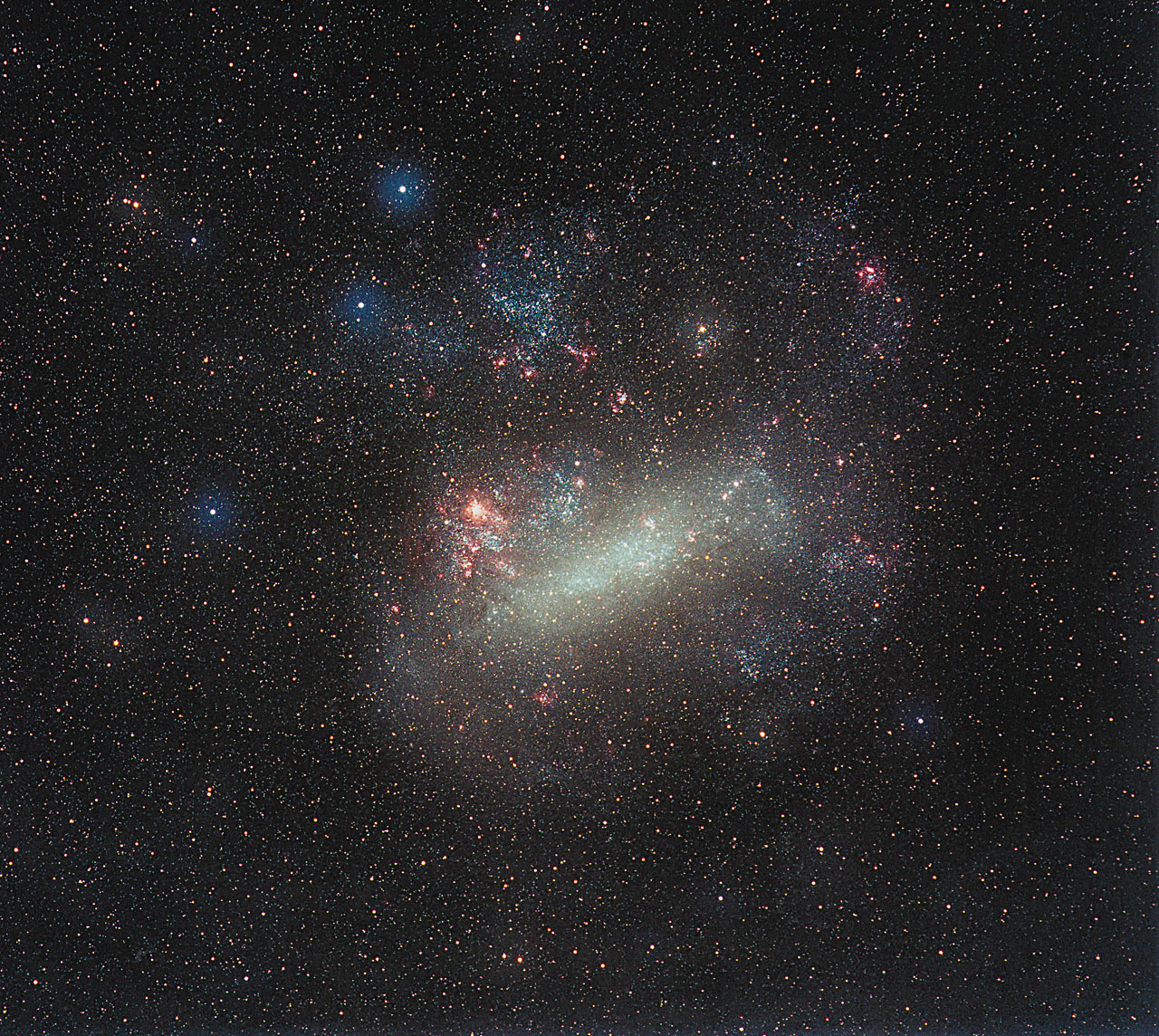 This ground-based image of the Large Magellanic Cloud was taken by the German astrophotographer Eckhard Slawik. It spans 10 x 10 degrees. Just to the left of the middle of this image the largest star-forming region in the Local Group of galaxies, 30 Doradus, is seen as a red patch. N11B itself is seen in the upper right part of the LMC. Credit: Eckhard Slawik

The Large Magellanic Cloud  (LMC) can be seen from the southern hemisphere, in the early morning sky to the south. 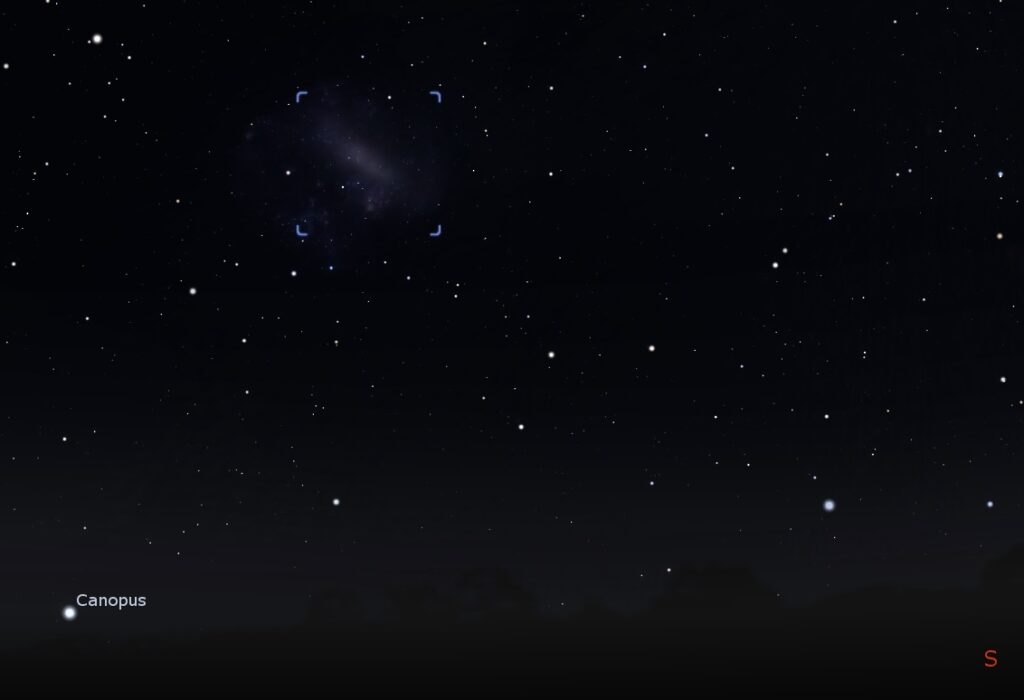 The Large Magellanic Cloud in the southern sky around 3:45 AM seen from Paranal Observatory in Chile. Credit: Stellarium / Bob Trembley.

There are a boatload of cataloged objects in the Large Magellanic Cloud… well it IS a galaxy! I was unaware that the Tarantula Nebula was located the LMC, and after reading that it’s visible to the naked eye, I’m going to feature it as next week’s observing target. 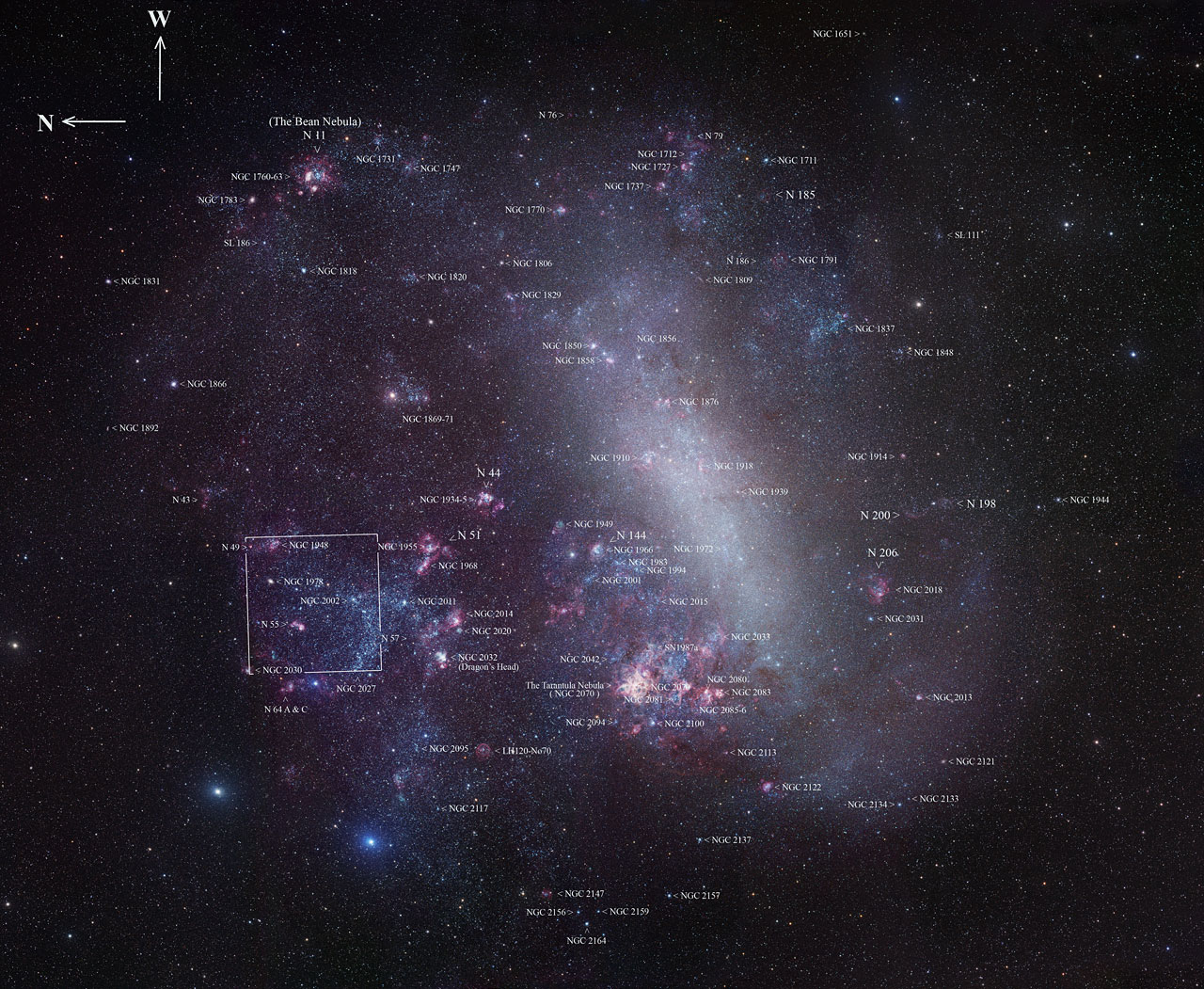 This image shows the entire Large Magellanic Cloud, with some of the brightest objects marked. The field of the new MPG/ESO 2.2-metre telescope image is indicated with an outline. The field of view is about ten degrees across. Credit: Robert Gendler/ESO

I traveled to Large Magellanic Cloud in SpaceEngine and then looked back towards our Milky Way galaxy: 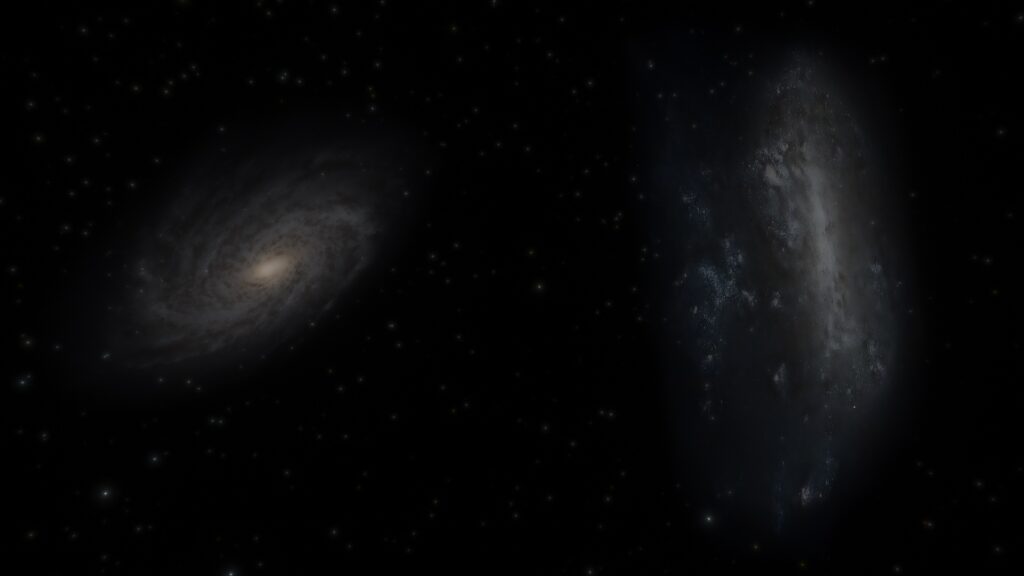 Simulation of the Large Magellanic Cloud (right) seen from behind, with the Milky Way galaxy (left) in the background. Credit: SpaceEngine / Bob Trembley

With a slight change in position, I was able to view the Large Magellanic Cloud edge-on – a perspective we are unable to see from Earth. How fortunate for us to have a close satellite galaxy, practically face-on, with so many wondrous features to observe! 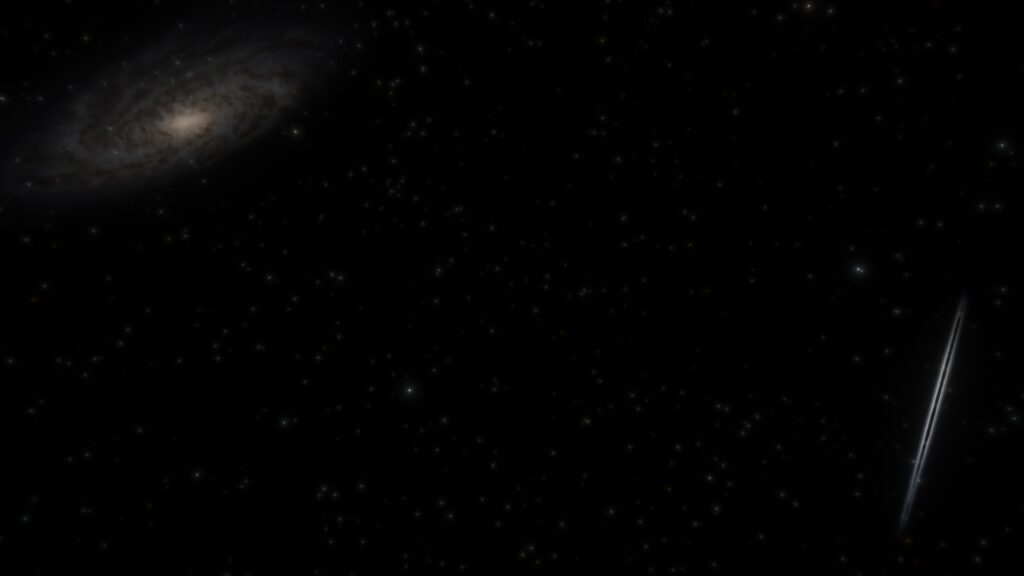 The Moon is at first quarter on July 9th – it is visible high in the southern sky in early evening.

After July 9th, the Moon will be a waxing gibbous, visible to the southeast in early evening, and up for most of the night.

Fifty years ago, humans took their first steps on the Moon. The world watched as we made history.

On July 19 at 1pm ET, we'll salute our #Apollo50th heroes and look forward to our next giant leap.

The Sun has been spot-free for 1 day; there is a region of intense coronal activity in the southern hemisphere where sunspot AR2744 used to be before dissolving. Coronal holes remain open at both poles – the southern hole appearing to have shrunk a little, and a couple large holes appear above and below the Sun’s equator.

Moderate prominence activity all over the Sun’s limb the last couple days; that region of coronal activity where AR2744 used to be still appears to be crackling.

Space debris re-entry over #Florida this morning.
We received 23 reports and 3 videos so far…https://t.co/6cWMVEnd6M pic.twitter.com/89zwKDxklw

Forty years ago today, during its “Grand Tour” of the outer solar system, @NASAVoyager 2 made its closest approach to Jupiter, where it observed wonders like the Great Red Spot. Now, @NASAJuno is studying the giant planet—including this same storm. https://t.co/ssS4B6Jesb pic.twitter.com/hXdVPd4zzL

If you haven’t see the documentary “The Farthest” – about the Voyager mission, you should!