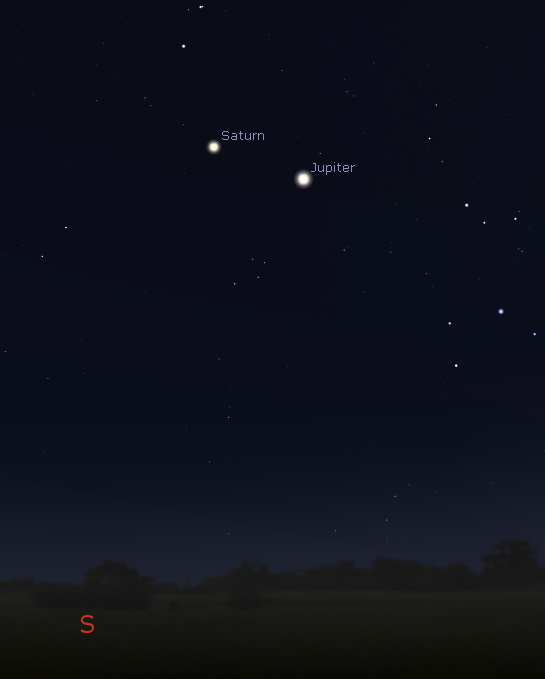 Saturn and Jupiter, continuing their months-long conjunction, appear in the southern predawn sky all week.

The ongoing conjunction of Saturn and Jupiter appears in the southern predawn sky this week. Credit: Stellarium / Bob Trembley. 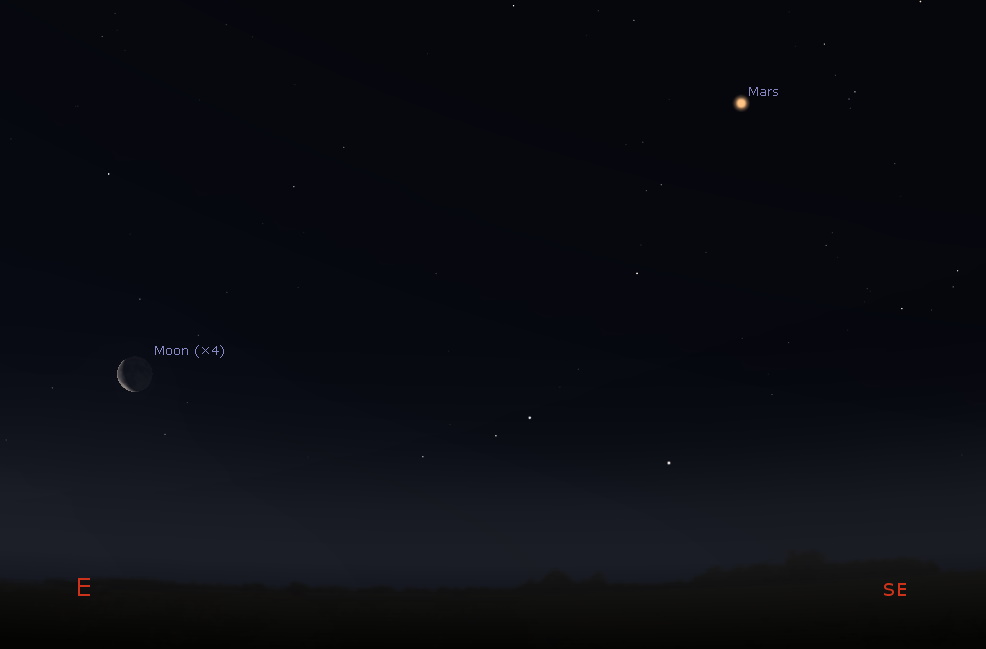 A very thin waning crescent moon appears near the planet Venus in the east-northeastern predawn sky on June 19th; with a good likelihood of earthshine on the Moon, this will be an excellent opportunity to take some astrophotos! 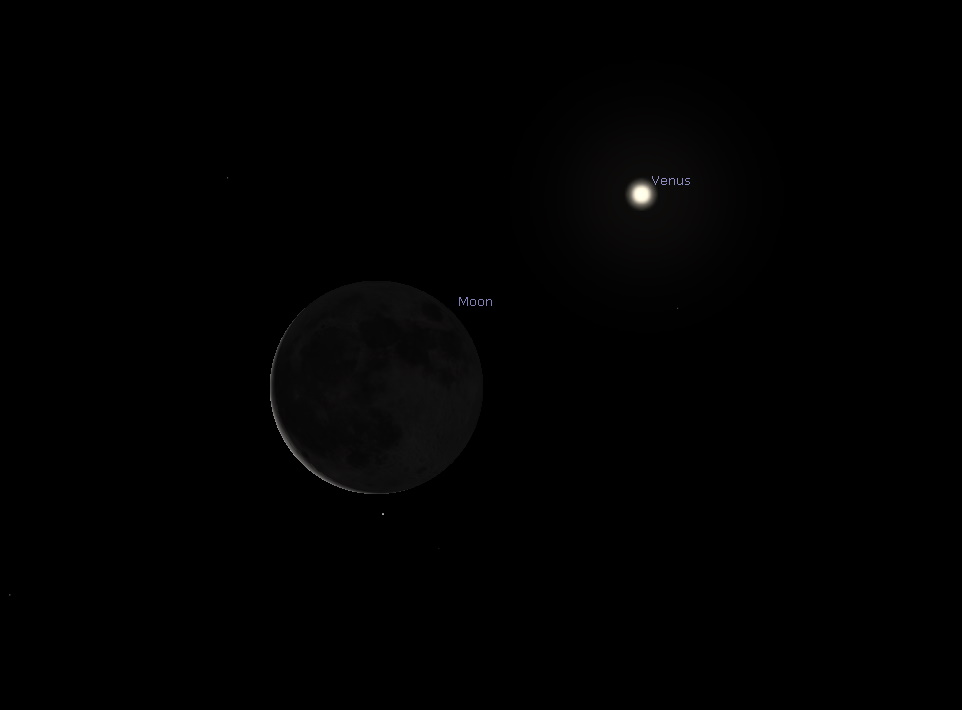 The constellation Hercules and the globular cluster M13 appear nearly overhead at midnight this week. 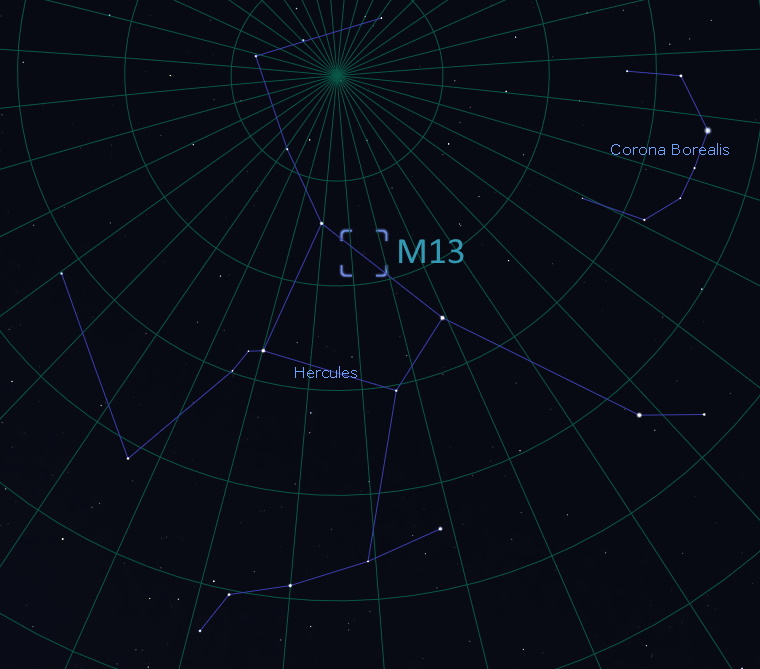 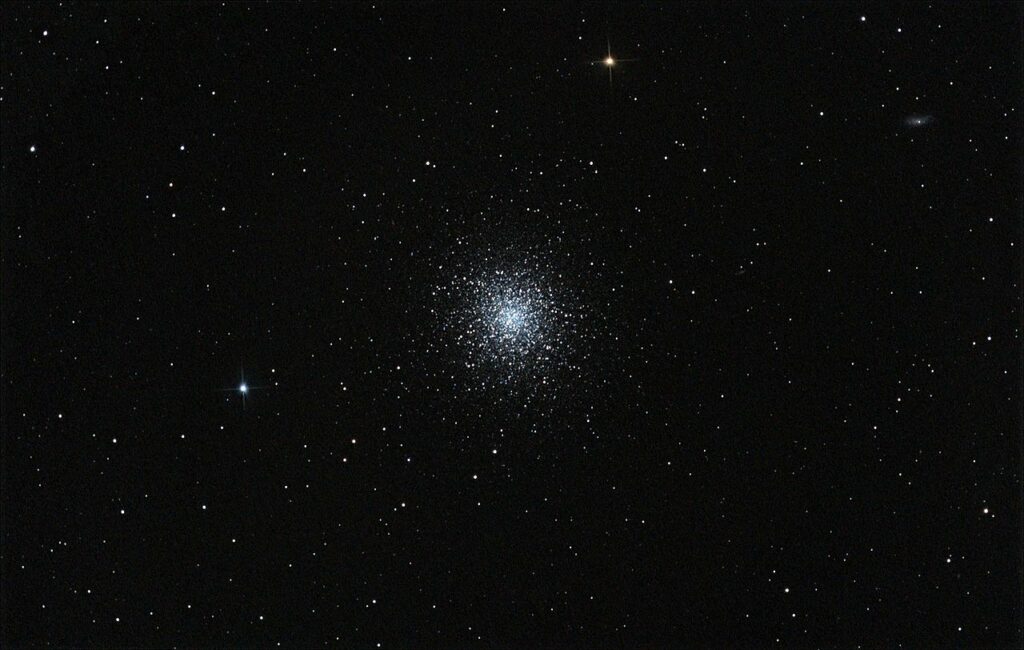 The Moon is a waning gibbous – visible low to the east before sunrise.

After June 21st the Moon will be a waxing crescent – visible toward the southwest in early evening.

Sunspot AR2765 from last week is decaying and rotating around the Sun’s western limb. Large coronal holes remain open at both poles.

Moderate prominence activity on the Sun’s limb over the last few days.

Congrats Christopher J. Corbally S.J. on your newly named asteroid! This listing is SO NEW it still appears as 2010 RS10 in the JPL Small Body Database Browser.

(119248) Corbally = 2001 RS10
Discovered 2001 Sept. 10 by R. A. Tucker at at the Goodricke-Pigott Observatory, Tucson.
Christopher J. Corbally S.J. (b. 1946) was ordained in the Society of Jesus and earned a PhD in astronomy. He continues a long career in astronomy where his contributions have included areas of multiple stellar systems, stellar spectral classification, galactic structure, star formation and telescope technology.

A member of NASA’s OSIRIS-REx asteroid sample return mission got a named asteroid:

Another named asteroid that caught my eye was:

(503033) New Hampshire = 2015 FE144
Discovered∗ 2005 Mar. 3 by the Catalina Sky Survey.
New Hampshire is a state located in the northeast corner United States, within the region of New England. The capitol is the city of Concord. It is nicknamed The
Granite State due to its high supply of quality granite. The state motto, Live Free or Die, accurately captures the strongly held sentiment of its citizens. 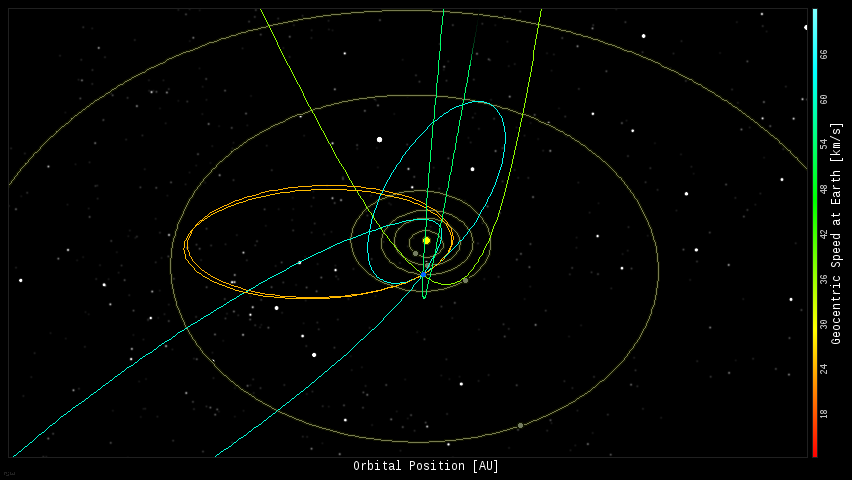 Experts have confirmed that a massive green fireball filmed streaking through the sky in Western Australia wasn’t aliens, but a meteor. 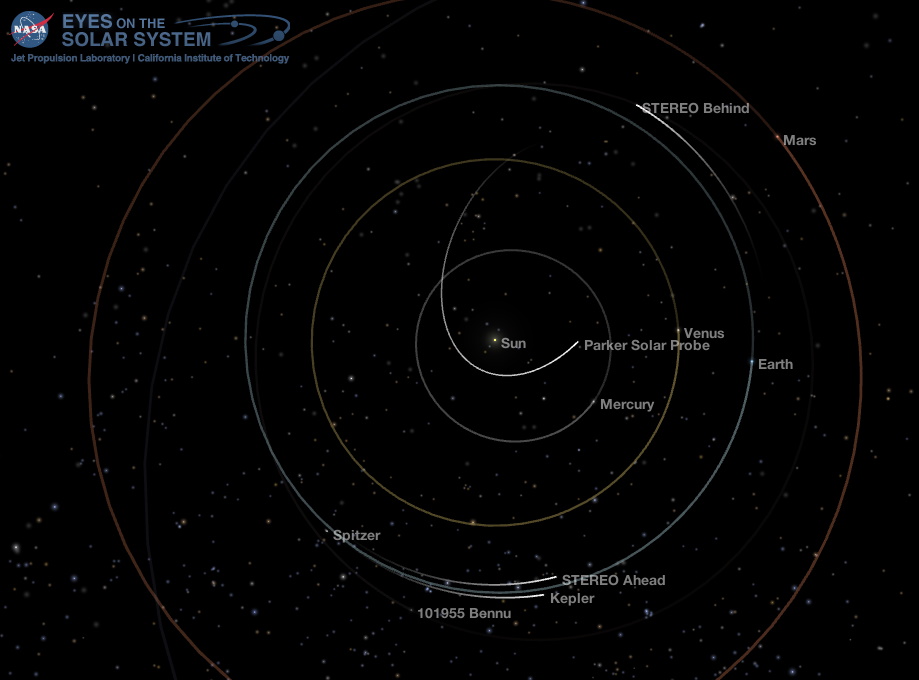 Position of the planets and a couple spacecraft in the inner solar system, 2020-06-16. Credit: NASA Eyes on the Solar System / Bob Trembley.

Position of the planets in the middle solar system – the orbit of asteroid 216 Kleopatra is highlighted. 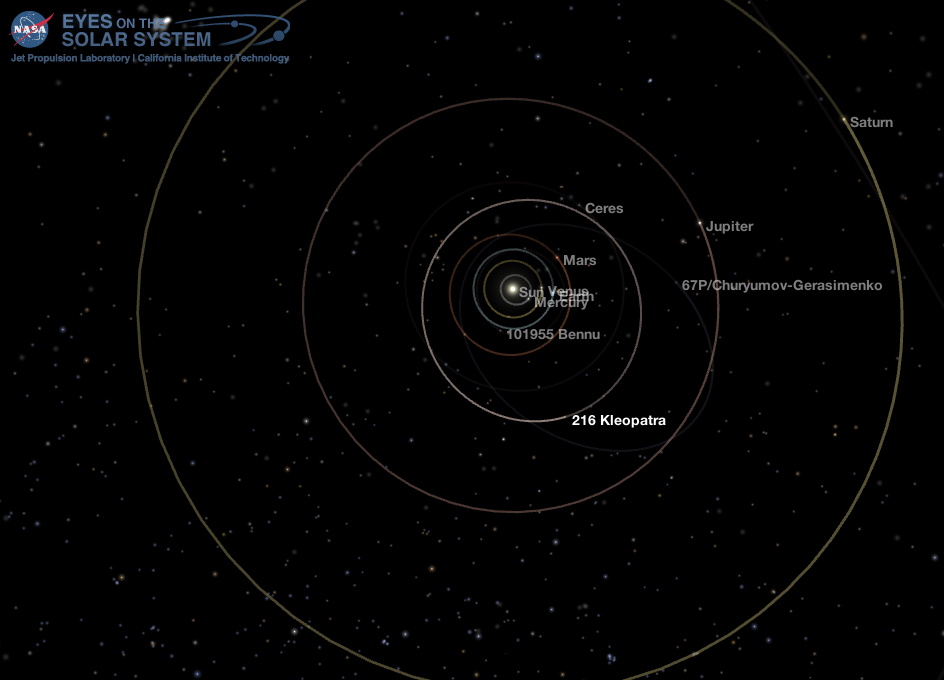 Position of the planets in the middle solar system, 2020-06-16 – the orbit of asteroid 216 Kleopatra is highlighted. Credit: NASA Eyes on the Solar System / Bob Trembley. 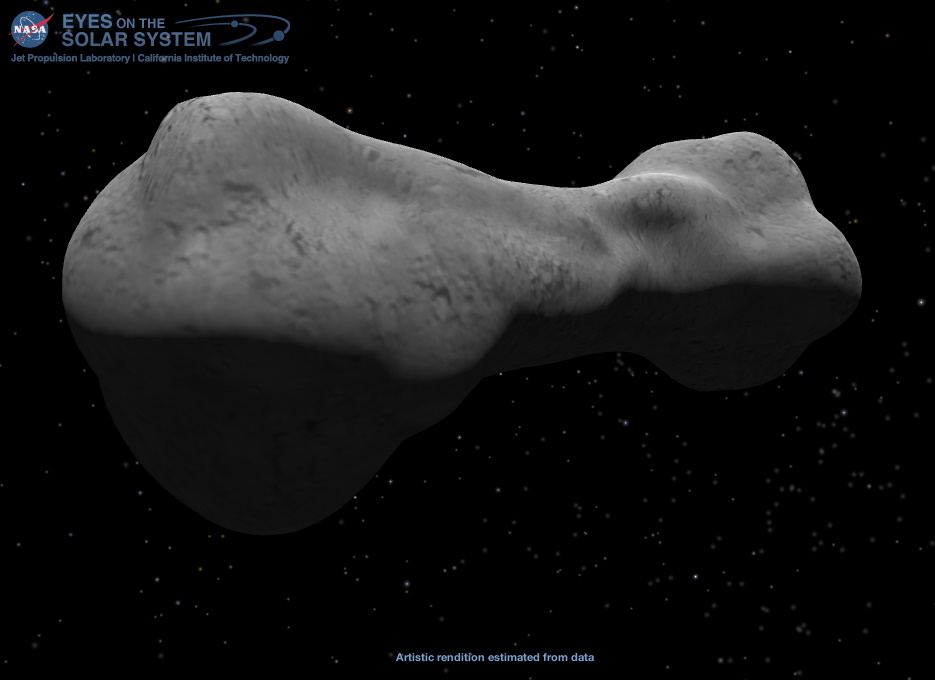 216 Kleopatra is a metallic, ham-bone-shaped asteroid and trinary system orbiting in the central region of the asteroid belt, approximately 138 kilometers (86 miles) in diameter. It was discovered on 10 April 1880, by Austrian astronomer Johann Palisa at the Austrian Naval Pola Observatory, in what is now Pula, Croatia. The M-type asteroid has a shorter than average rotation period of 5.4 hours. It was named after Cleopatra, the famous Egyptian queen. Two small minor-planet moons were discovered in 2008, and later named Alexhelios and Cleoselene.

Kleopatra is a relatively large asteroid, measuring 217 × 94 × 81 km. Calculations from its radar albedo and the orbits of its moons show it to be a rubble pile, a loose amalgam of metal, rock, and 30–50% empty space by volume, likely due to a disruptive impact prior to the impact that created its moons.

Kleopatra has an unusual shape. Initial observations with the ESO 3.6 m Telescope at La Silla, run by the European Southern Observatory, were interpreted to show a double source with two distinct lobes of similar size. These results were disputed when radar observations at the Arecibo Observatory showed that the two lobes of the asteroid are connected, resembling the shape of a ham-bone. The radar observations provided a detailed shape model that appeared on the cover of Science Magazine. – Wikipedia 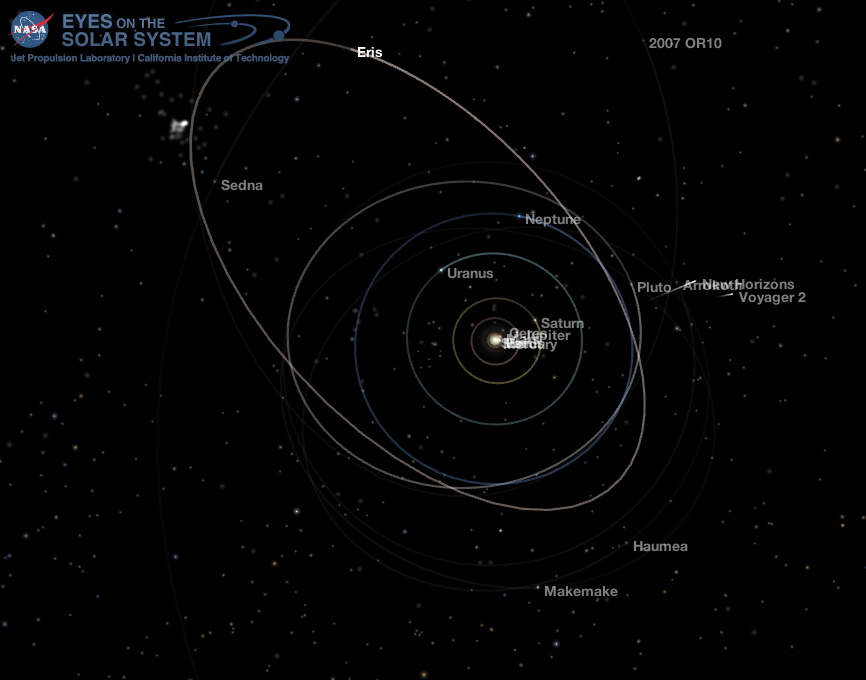 Position of the planets in the middle solar system, 2020-06-16 – the orbit of dwarf planet and transneptunian object Eris is highlighted. Credit: NASA Eyes on the Solar System / Bob Trembley. 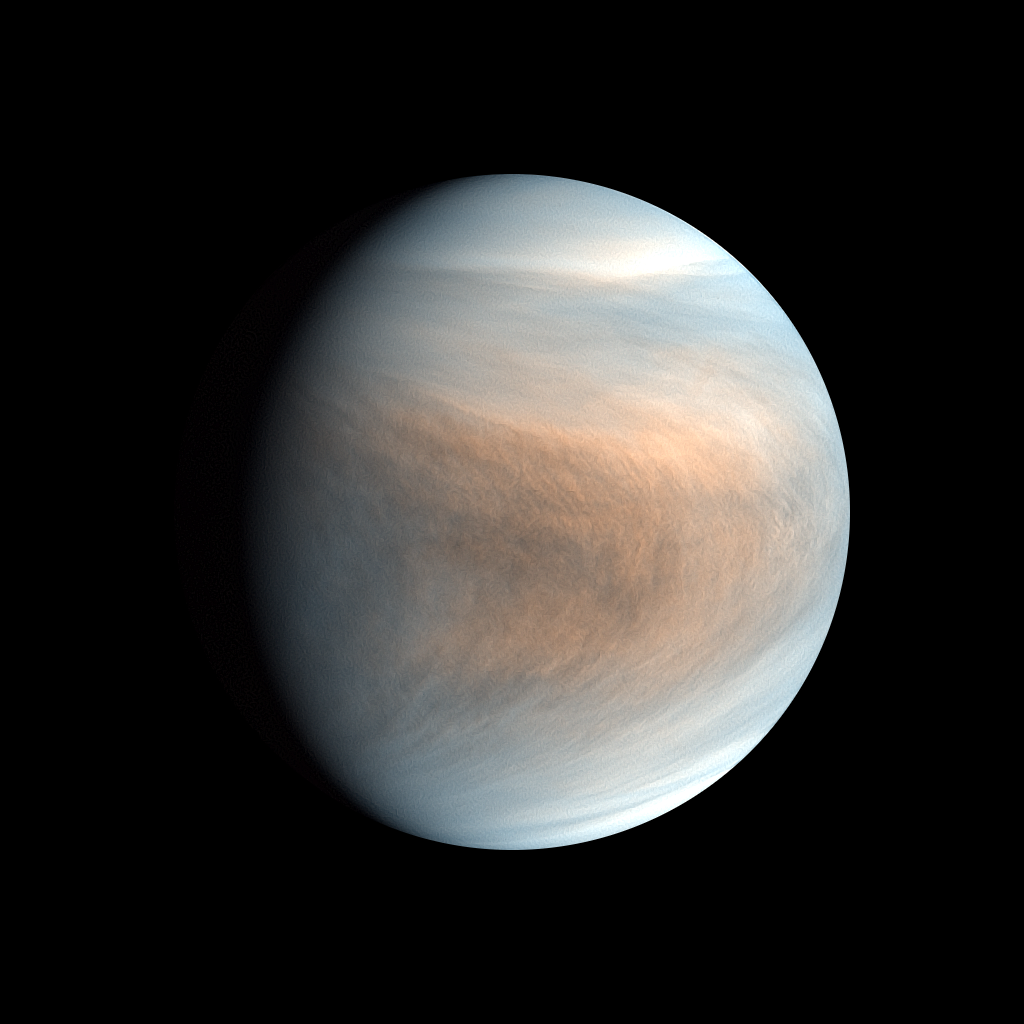 Venus is the second planet from the Sun. It is named after the Roman goddess of love and beauty. As the second-brightest natural object in the night sky after the Moon, Venus can cast shadows and can be, on rare occasion, visible to the naked eye in broad daylight. Venus lies within Earth’s orbit, and so never appears to venture far from the Sun, either setting in the west just after dusk or rising in the east a bit before dawn. Venus orbits the Sun every 224.7 Earth days. With a rotation period of 243 Earth days, it takes longer to rotate about its axis than any other planet in the Solar System and does so in the opposite direction to all but Uranus (meaning the Sun rises in the west and sets in the east). Venus does not have any moons, a distinction it shares only with Mercury among planets in the Solar System.

Venus is a terrestrial planet and is sometimes called Earth’s “sister planet” because of their similar size, mass, proximity to the Sun, and bulk composition. It is radically different from Earth in other respects. It has the densest atmosphere of the four terrestrial planets, consisting of more than 96% carbon dioxide. The atmospheric pressure at the planet’s surface is 92 times that of Earth, or roughly the pressure found 900 m (3,000 ft) underwater on Earth. Venus is by far the hottest planet in the Solar System, with a mean surface temperature of 735 K (462 °C; 863 °F), even though Mercury is closer to the Sun. Venus is shrouded by an opaque layer of highly reflective clouds of sulfuric acid, preventing its surface from being seen from space in visible light. It may have had water oceans in the past, but these would have vaporized as the temperature rose due to a runaway greenhouse effect. The water has probably photodissociated, and the free hydrogen has been swept into interplanetary space by the solar wind because of the lack of a planetary magnetic field. Venus’s surface is a dry desertscape interspersed with slab-like rocks and is periodically resurfaced by volcanism.

As one of the brightest objects in the sky, Venus has been a major fixture in human culture for as long as records have existed. It has been made sacred to gods of many cultures, and has been a prime inspiration for writers and poets as the morning star and evening star. Venus was the first planet to have its motions plotted across the sky, as early as the second millennium BC. 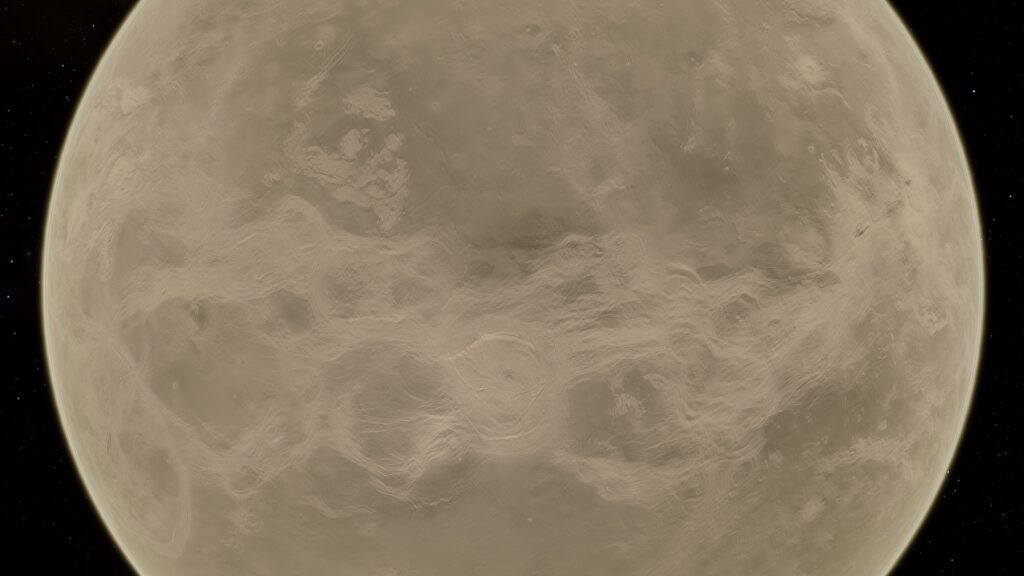 The Exp 63 crew is starting the week getting ready for a pair of upcoming spacewalks and a satellite deployment. They are also setting up research gear that will analyze hazardous particles and plasma crystals. https://t.co/SnA4WeBqdv pic.twitter.com/O6CPEWh0en

With about a month till @NASAPersevere’s launch, @NASA leaders, scientists & engineers will talk the latest on the #Mars2020 rover June 17, 11am PT (2pm ET, 1800 UTC). Questions will be answered live on the show. Submit yours with #askNASA.

Today, @ESASolarOrbiter makes its first close approach to the Sun, called perihelion, bringing the spacecraft within 48 million miles of our star. This is the closest distance at which a spacecraft has ever taken images of the Sun. More from @ESA: https://t.co/qBrjFfLhLT pic.twitter.com/wn71l9yzR2

The monthly GISTEMP surface temperature analysis update has been posted. The global mean temperature anomaly for May 2020 was 1.02°C above the 1951-1980 May average. https://t.co/EDTZWL4pYk pic.twitter.com/k8cirFMycP

@GrandCanyonNPS Star Party has gone virtual this year! Join @IDADarkSky Director of Public Policy @JohnBarentine for a presentation on 'Dark Skies in Isolation' and the importance of protecting the night from #lightpollution.https://t.co/3kOzFYBfsy

Continuing with my visual tour of nearby stars and their systems, we travel to Tau Ceti, about 11.7 light years distant. 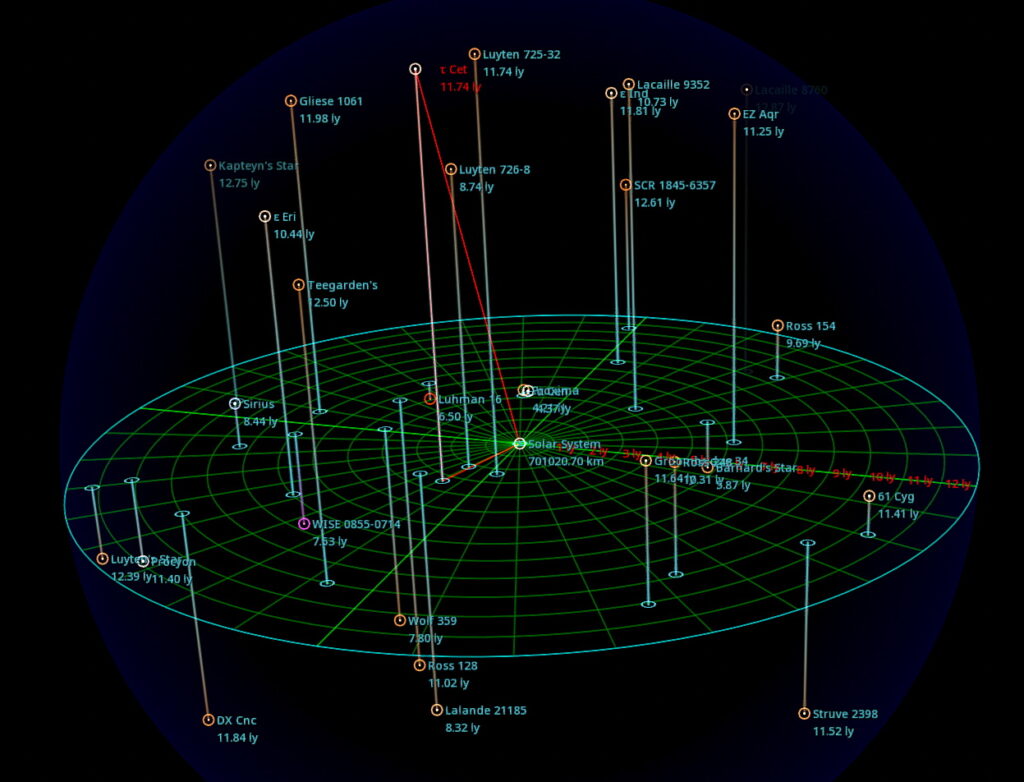 Distance to Tau Ceti from Sol; the plane (green) is aligned with the orientation of the plane of the Milky Way galaxy. Credit: SpaceEngine / Bob Trembley.

Tau Ceti (τ Cet, τ Ceti) is a star in the constellation Cetus. It can be seen with the unaided eye as a third-magnitude star.

It has a spectrum similar to the Sun, but is only 78% of the Sun’s mass. It is just under 12 light-years from the Solar System, a relatively nearby star. It is the closest solitary G-class star. The star appears stable, and is “metal-deficient” because (like the Sun) it is mostly made of hydrogen and helium.

There is more than ten times as much dust surrounding Tau Ceti as in the Solar System. There are probably five planets orbiting Tau Ceti, two in the habitable zone. Because of its debris disk, any planet orbiting Tau Ceti would get far more impact events than Earth. Despite this, its Sun-like characteristics have led to widespread interest in the star. Tau Ceti is consistently listed as a target for the Search for Extra-Terrestrial Intelligence (SETI), and it appears in some science fiction literature.

On December 19, 2012, evidence was presented for a system of five planets orbiting Tau Ceti. The planets’ estimated minimum masses are between two and six times the Earth’s mass. Their orbital periods range from 14 to 640 days. One of them, Tau Ceti e, appears to orbit about half as far from Tau Ceti as Earth does from the Sun. With Tau Ceti’s luminosity of 52% that of the Sun and a distance from the star of 0.552 AU, the planet would receive 1.71 times as much stellar radiation as Earth does. This is slightly less than Venus, which gets 1.91 times Earth’s. Some research places it within the star’s habitable zone.

The habitable zone for a star is where liquid water could be present on an Earth-like planet. For Tau Ceti, this is at a radius of 0.55–1.16 AU, where 1 AU is the average distance from the Earth to the Sun. – Wikipedia

NOTE: The Wikipedia article says 5 exoplanets, but at the time of this writing, NASA’s exoplanet archive only shows 4 for Tau Ceti; SpaceEngine also shows only 4 exoplanets. 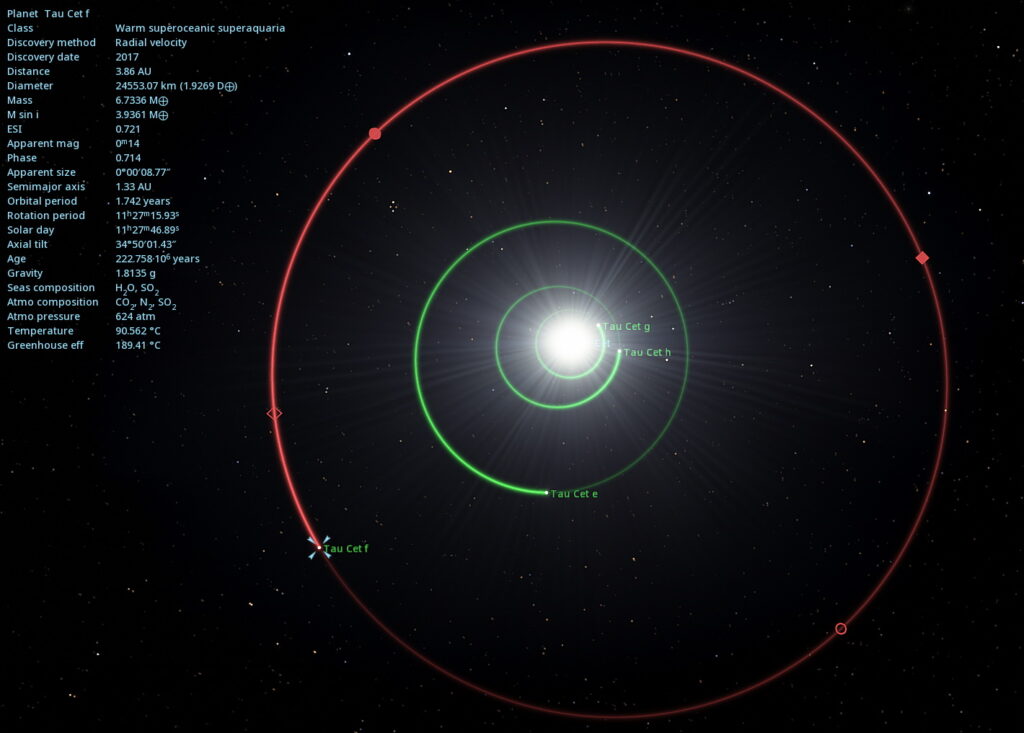 Top-down view of the exoplanet orbits around the star Tau Ceti – the orbit of Tau Ceti f is highlighted in red . Credit: SpaceEngine / Bob Trembley. 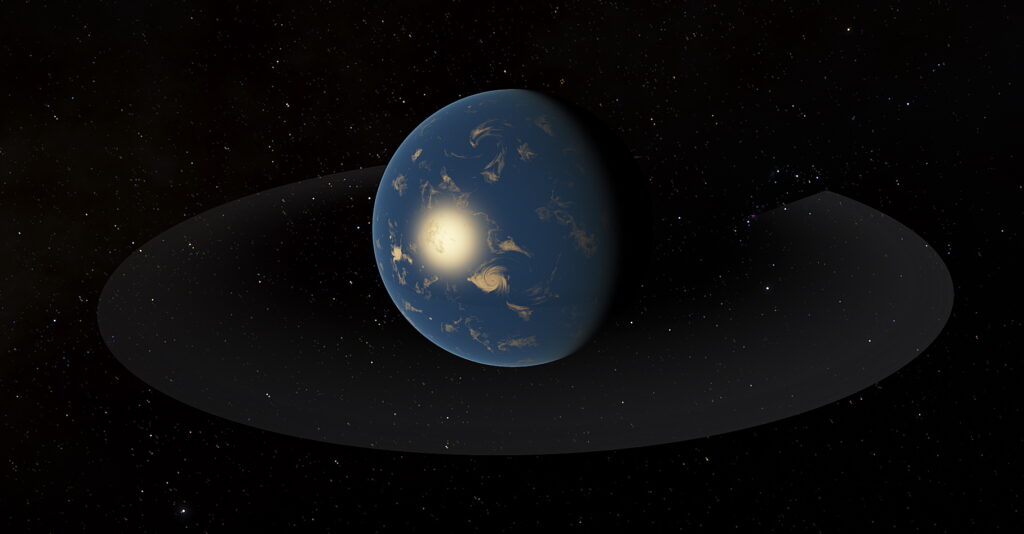