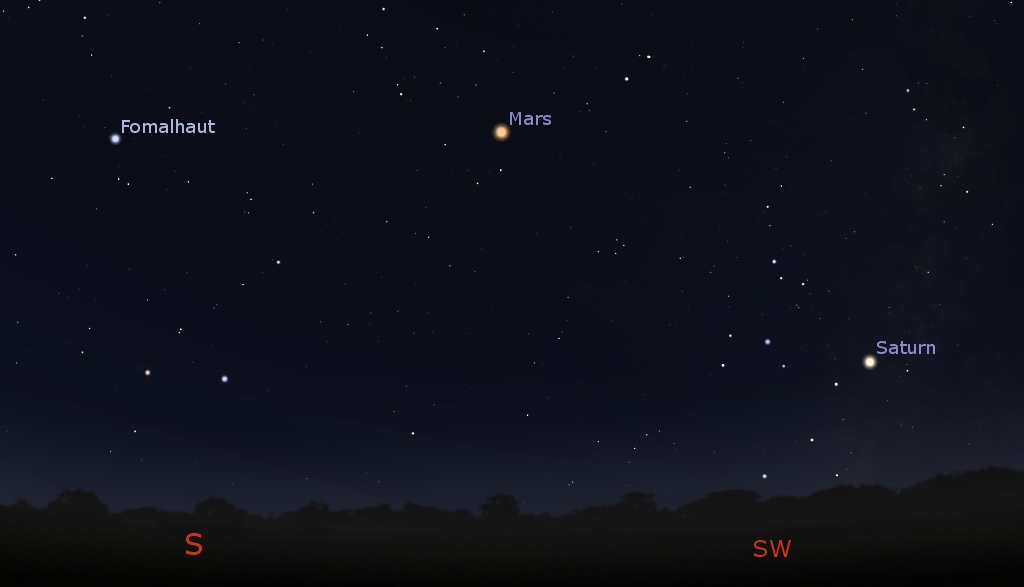 Mars shines like a bright unblinking cinder in the early morning sky; I’m truly astounded at how bright Mars has been getting – and it’s going to continue to brighten until the end of July.

This nearing Mars opposition and close approach has been bittersweet for astrophotographers, as the planet is experiencing a global dust storm, and surface features are difficult to resolve.

Mars Storm Watch: The dust storm now circles the planet. No signal yet from Opportunity, but no response is expected until skies begin to clear. We continue to listen daily. https://t.co/VwuuPwEpPA pic.twitter.com/8q7lDoezxs

The Moon will be between Saturn and the bright star Antares on the evening of June 26th. 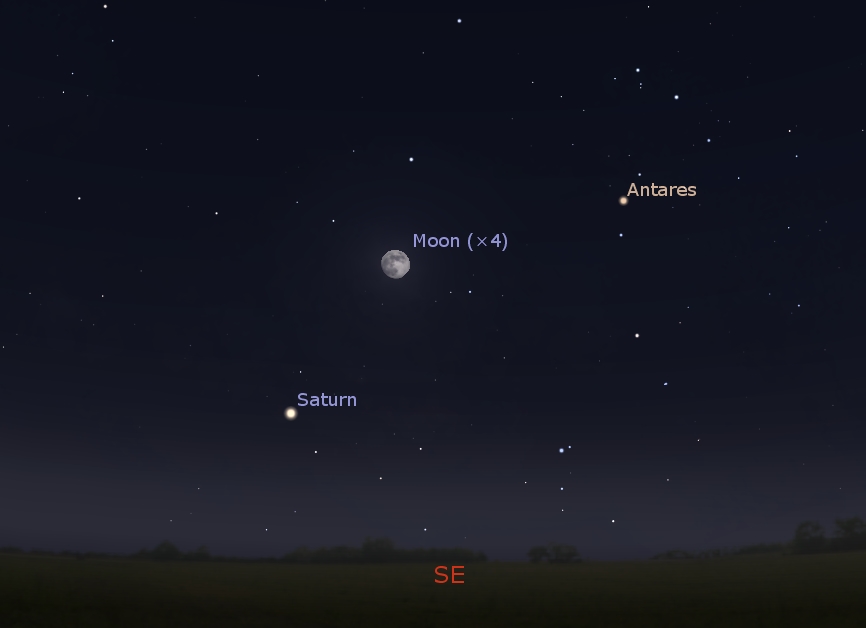 With each passing evening, the bright star Regulus appears a bit lower in the western sky, and is getting closer to Venus. Next week Regulus and Venus will appear very close together! 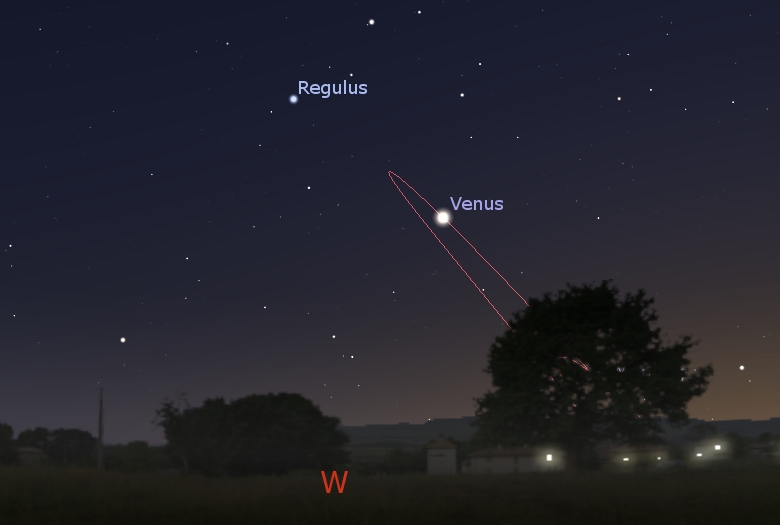 The Moon is a waxing gibbous heading towards full on June 27th, after which it will be a waning gibbous. The full Moon will appear very close to Saturn the evening of June 27th. 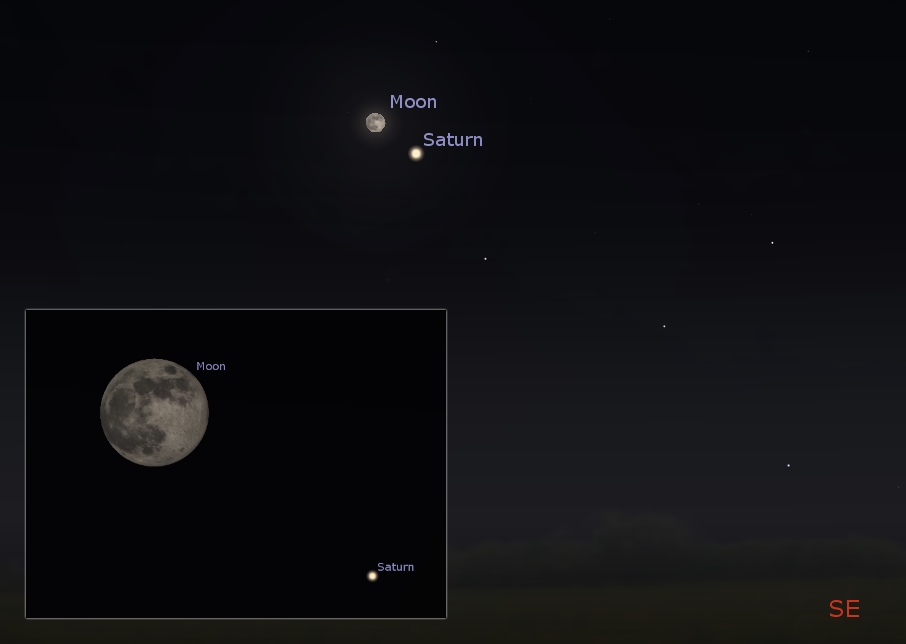 M81 and M82 are galaxies in Ursa Major, and popular observing targets. 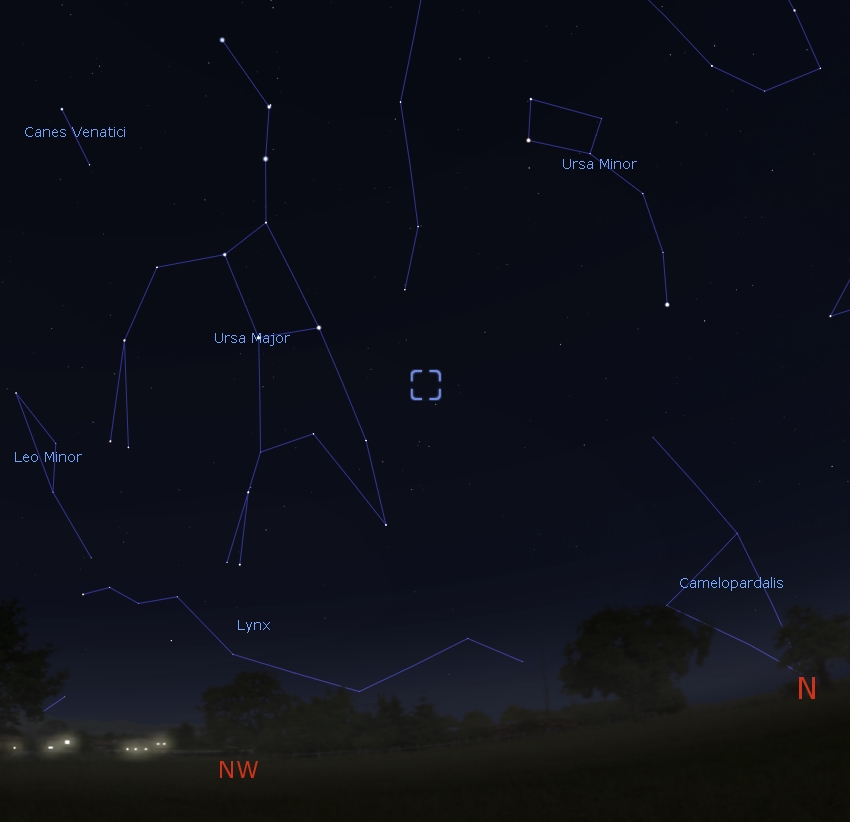 Finding M81 and M82 is relatively easy when star-hopping using the “bowl of the dipper.” 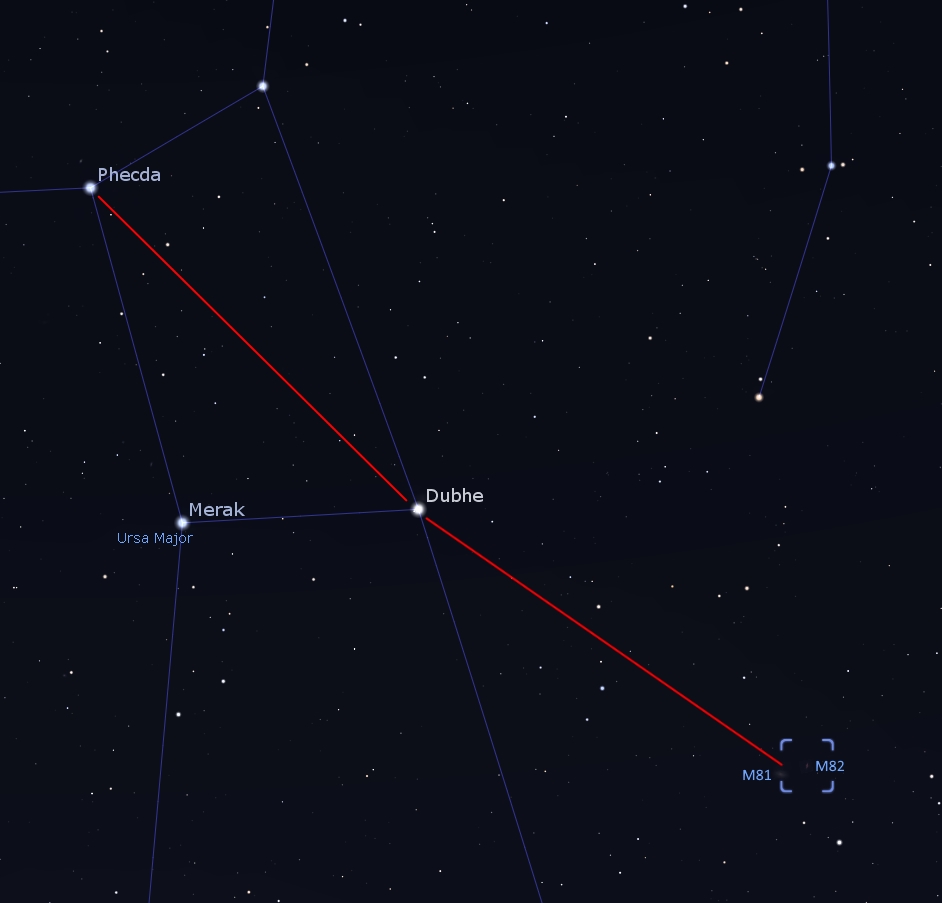 In small telescopes, the galaxies appear very near each other; M81 as an oval smudge, and M82 as a cigar-shaped smudge. 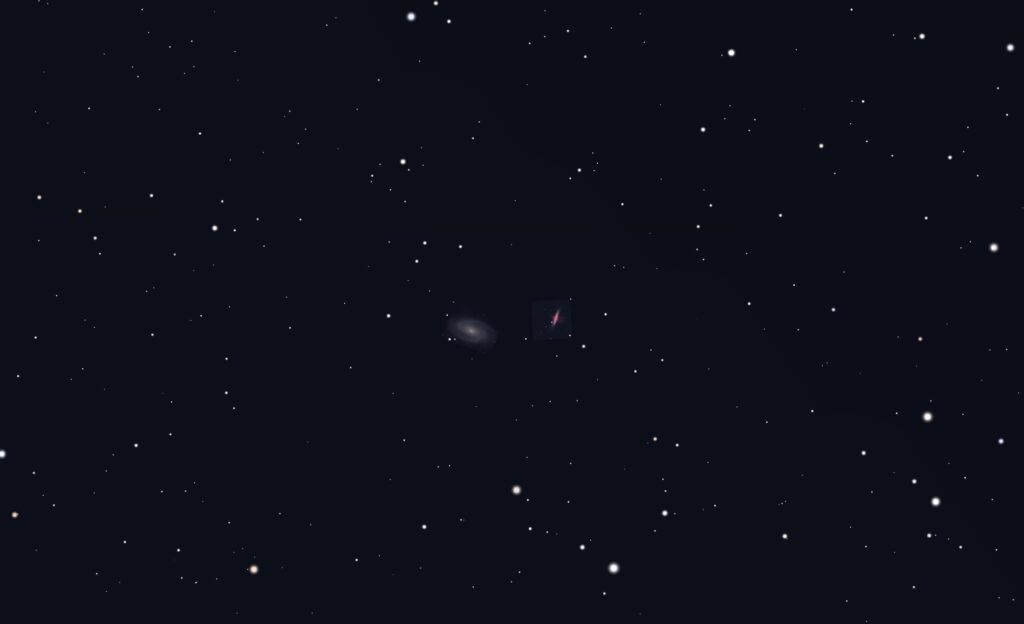 M81 and M82 as they might appear in a small telescope. Credit: Stellarium / Bob Trembley.

Seen with a space telescope, M81 is a beautiful spiral galaxy. M81 has an active galactic nucleus, harboring a 70 million M☉ (Sol) supermassive black hole; the galaxy’s large size and high brightness make it a popular target for amateur astronomers. 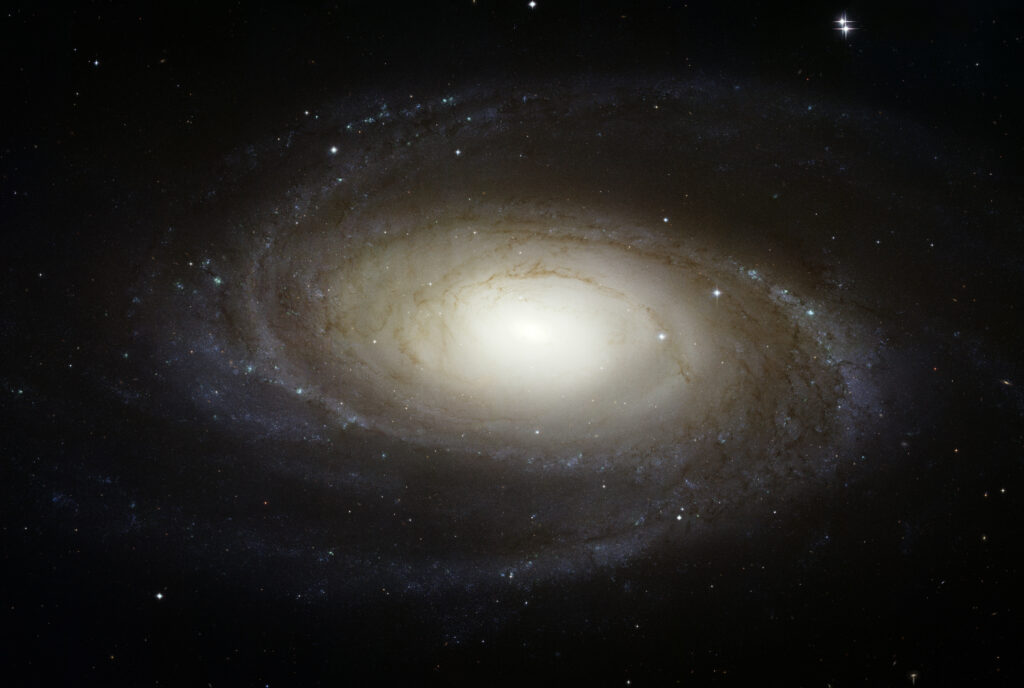 The sharpest image ever taken of the large “grand design” spiral galaxy M81 is being released today at the American Astronomical Society Meeting in Honolulu, Hawaii.A spiral-shaped system of stars, dust, and gas clouds, the galaxy’s arms wind all the way down into the nucleus. Though the galaxy is located 11.6 million light-years away, the Hubble Space Telescope’s view is so sharp that it can resolve individual stars, along with open star clusters, globular star clusters, and even glowing regions of fluorescent gas. The Hubble data was taken with the Advanced Camera for Surveys in 2004 through 2006. This colour composite was assembled from images taken in blue, visible, and infrared light. Credit: NASA, ESA and the Hubble Heritage Team (STScI/AURA). Acknowledgment: A. Zezas and J. Huchra (Harvard-Smithsonian Center for Astrophysics)

Space telescope images of M82 might make one wonder what happened to this galaxy? M82 is a starburst galaxy – creating ten times as many stars as our Milky Way galaxy; this starburst activity is likely due to a “recent” close interaction with M81. 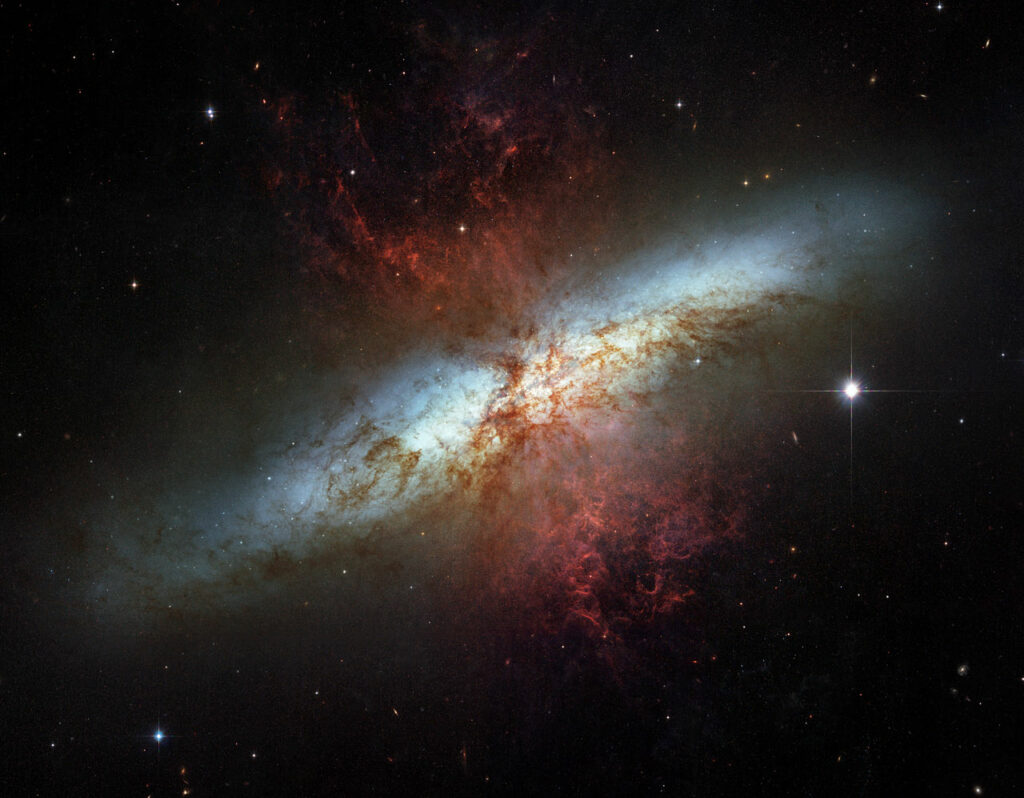 This mosaic image of the magnificent starburst galaxy, Messier 82 (M82) is the sharpest wide-angle view ever obtained of M82. It is a galaxy remarkable for its webs of shredded clouds and flame-like plumes of glowing hydrogen blasting out from its central regions where young stars are being born 10 times faster than they are inside in our Milky Way Galaxy. Credit: NASA, ESA and the Hubble Heritage Team (STScI/AURA). Acknowledgment: J. Gallagher (University of Wisconsin), M. Mountain (STScI) and P. Puxley (NSF).

Small sunspot group AR2715 is decaying, and what little remains will soon rotate out of view. There is a significant coronal hole at the Sun’s south pole, and a more diffuse one in the lower latitudes.

SpaceWeather.com says: “NOAA forecasters say there is a 70% chance of G1-class geomagnetic storms on June 27th when a stream of solar wind hits Earth’s magnetic field. The gaseous material is flowing from a large, irregular hole in the sun’s atmosphere. High latitude sky watchers should be alert for auroras, especially in the southern hemisphere where winter darkness favors visibility.” The solar wind speed is 458.4 km/sec, with a density of 11.9 protons/cm3.

There have been a few small prominences over the last couple days – the most significant activity is rotating out of view on the right side of the video below:

International Asteroid Day is June 30th – on the anniversary of the Tunguska Impact in 1908. 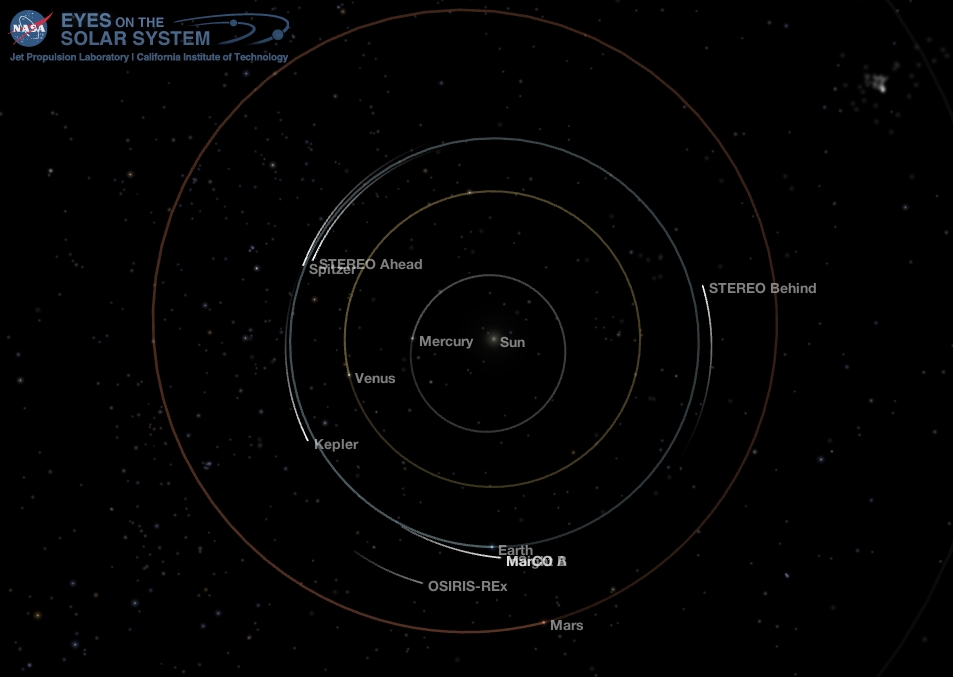 Position of the planets in the inner solar system, June 26, 2018. Credit: NASA Eyes on the Solar System / Bob Trembley. 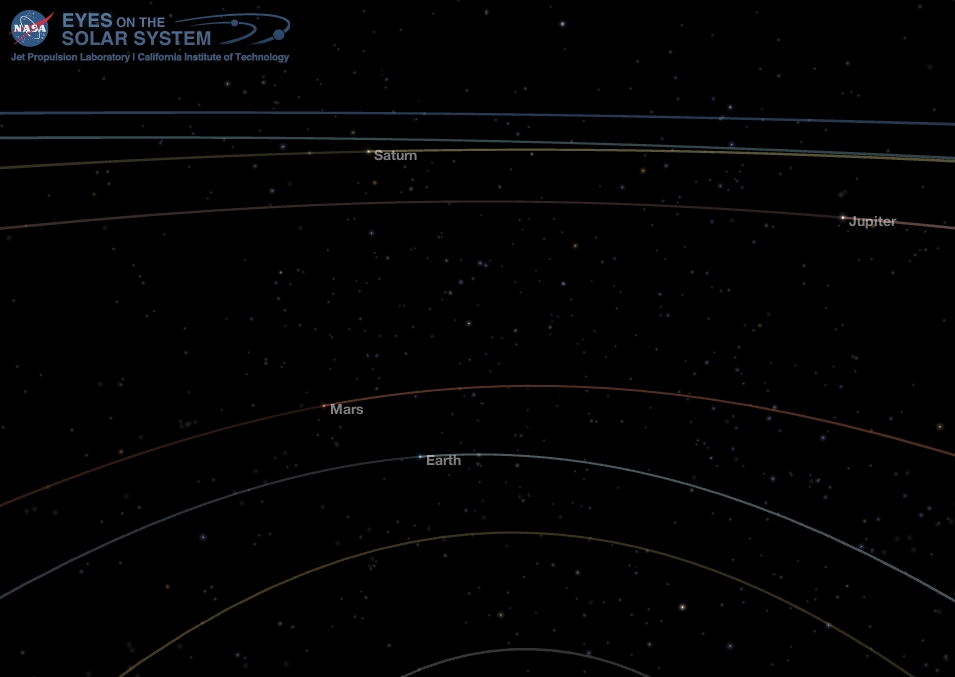 Alternate view of the position of the planets in the inner solar system, June 26, 2018. Credit: NASA Eyes on the Solar System / Bob Trembley.

Exoplanet of the Week: TrES-4 B

TrES-4 orbits its primary star every 3.543 days and eclipses it when viewed from Earth. The planet is 0.919 times as massive as Jupiter but 1.799 times the diameter, the largest planet ever found at the time (next to WASP-17b, found on 1 May 2009), giving it an average density of only about 0.333 grams per cubic centimetre, approximately the same as Saturn’s moon Methone. This made TrES-4 both the largest known planet and the planet with the lowest known density at the time of its discovery.– Wikipedia 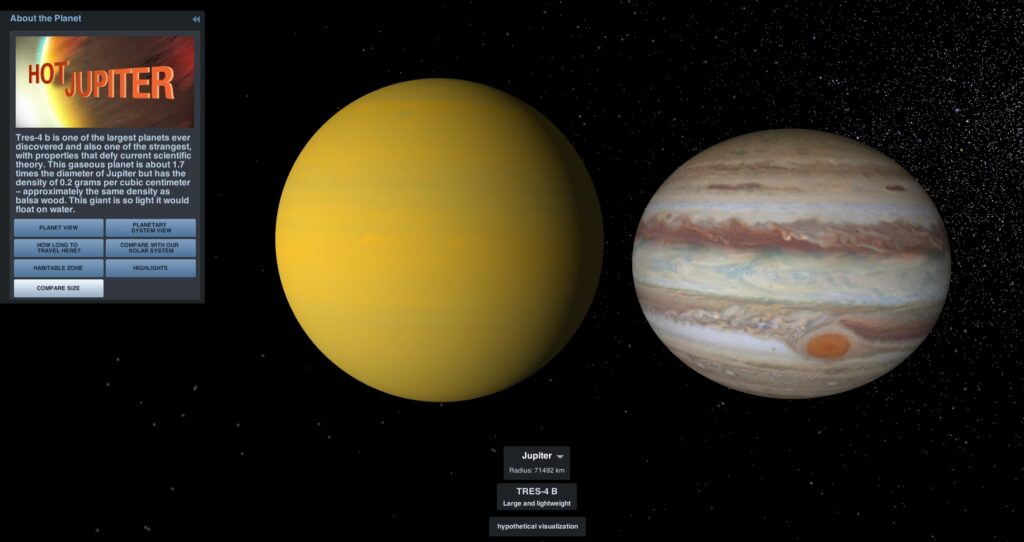