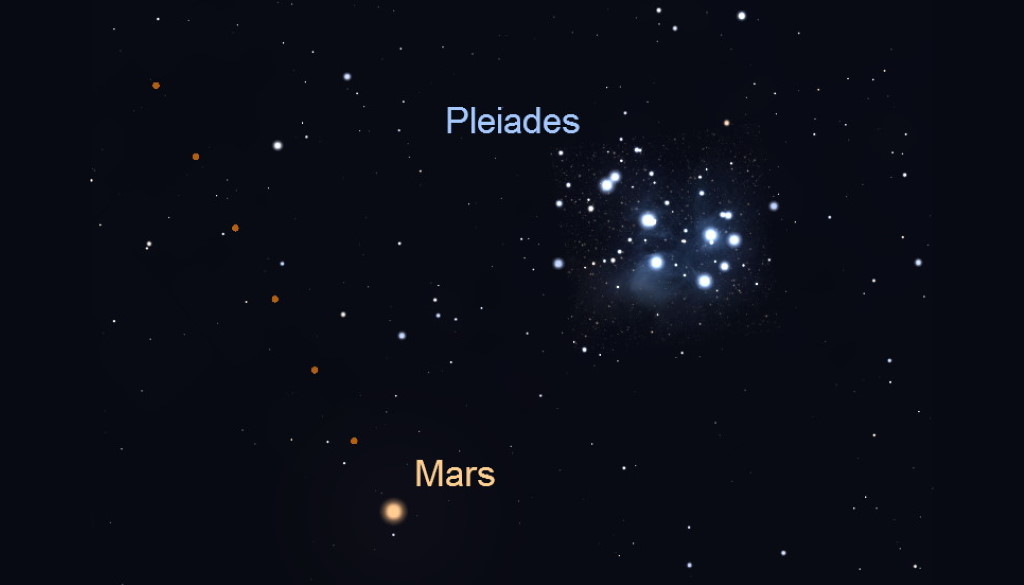 This week, the Moon appears in the predawn sky, Mars is in a close conjunction with the Pleiades star cluster, and the planets Mercury, Jupiter and Saturn appear low above the horizon before dawn; Mercury and Jupiter appear in a very close conjunction – less than 1 degree apart, as they swap positions over the course of several days

The Moon appears near the star Spica high in the southwestern predawn sky on March 2nd.

The Moon appears near the star Antares in the constellation Scorpius in the southern predawn sky on March 5th.

The Moon appears in the constellation Sagittarius in the south-southeastern predawn sky on March 7th.

Mars and Uranus appear in the southwestern sky after sunset – Mars appears very close to the Pleiades star cluster all week.

Here’s a close-up of the Mars-Pleiades conjunction:

Jupiter, Mercury and Saturn appear low above the east-southeastern horizon before dawn this week; Jupiter and Mercury swapping positions by early next week.

Before sunrise on March 5th, Mercury and Jupiter appear less than a degree apart!

The waning crescent Moon appears in the southeastern predawn sky with the planets on March 8th.

The third quarter Moon occurs on March 5th – rising around midnight, and visible to the south after sunrise.

After March 5th, the Moon will be a waning crescent – visible low to the east before sunrise.

George Carruthers invented the first Moon-based telescope, installed during Apollo 16. He had a long and fruitful career in space science and was awarded the National Medal of Technology and Achievement. #BlackHistoryMonth https://t.co/EpWyDT0EsE pic.twitter.com/eNKaYd3Niy

The Sun has been spot-free for one day – a sunspot may be emerging below the equator.

LOTS of prominence activity again over that last couple days – prominence are popping up all over!

With this interactive, students can explore solar storms using the same data, images, and tools that scientists use in this interactive from NOVA l PBS Labs! ☀️ https://t.co/52p44j1Yuc (@pbsteachers ) (@NOVAeducation) #SciChat #Science #Astronomy

.@NASAGoddard computer scientist Marlo Maddox created a tool to allow mission operators and space weather forecasters to quickly access information about the space weather environment — now in use by NASA and other agencies. Learn more about Marlo. ⬇️ https://t.co/A1Tzk0Zglm

If you saw this event, please report it here:https://t.co/6WrVfuI28I

As astronaut Kate Rubins continues work to secure a bolt on the bracket support structures at the base of the solar arrays, the @Space_Station is flying 261 miles over Venezuela and is about to pass over Brazil. pic.twitter.com/zTcPxaplEX

OK… I HAD 5 pair of red/blue 3D glasses BEFORE I moved… where are they now? Who knows?

Not a spacecraft, but hey!

Today another "Hidden Figure" will be recognized as NASA names its headquarters for Mary W. Jackson, NASA’s first Black female engineer. All of us at the Katherine Johnson IV&V Facility are glad to see this trailblazing woman not be so hidden anymore. pic.twitter.com/7AhjSSCyXx

Our latest Picture of the Week features NGC 2336, the quintessential galaxy — big, beautiful and blue — captured here by the NASA/ESA Hubble Space Telescope.

The year 2020 brought record wildfires to the U.S. West, which is seeing more frequent, larger, more severe, faster, and more destructive fires that are impacted by changing climate conditions. But these wildfires are affecting climate as well. Learn how. https://t.co/0v8pHy7qRK

🌏 is the only planet that nearly 8 billion people call "home sweet home." That's why @NASA studies it more than any other planet.

Hot Jupiters, mini-Neptunes, super-Earths, planets with two or three suns, rocky planets with lava seas, planets where it might rain glass – these make up just a short list of oddities among 4,300+ confirmed worlds in the Milky Way. Explore them all: https://t.co/Q72MwrjTwX pic.twitter.com/5hoaoyhqI1

Teams successfully completed two important milestones that confirmed @NASAWebb’s internal electronics are functioning as intended, and that the spacecraft and its instruments can send and receive data through the network it will use in space. https://t.co/dzO6cc6Ko6 pic.twitter.com/Si6Kr5JTLE

Not Aurora, but light pillars, taken by a buddy!

At last night’s meeting of the Warren Astronomical Society, President Diane Hall mentioned that she has spoken with the Detroit Audubon Society about planning a Dark Sky event on Belle Isle! I’m pretty sure that several member clubs of the Great Lakes Association of Astronomy Clubs will want to participate. More info as this develops!

IAU Dark Skies Ambassador Kyra Xavia will be speaking at the Women in Lighting webinar on the New Zealand's aim to become a Dark Sky nation.

This one is my mother in-law’s favorite! 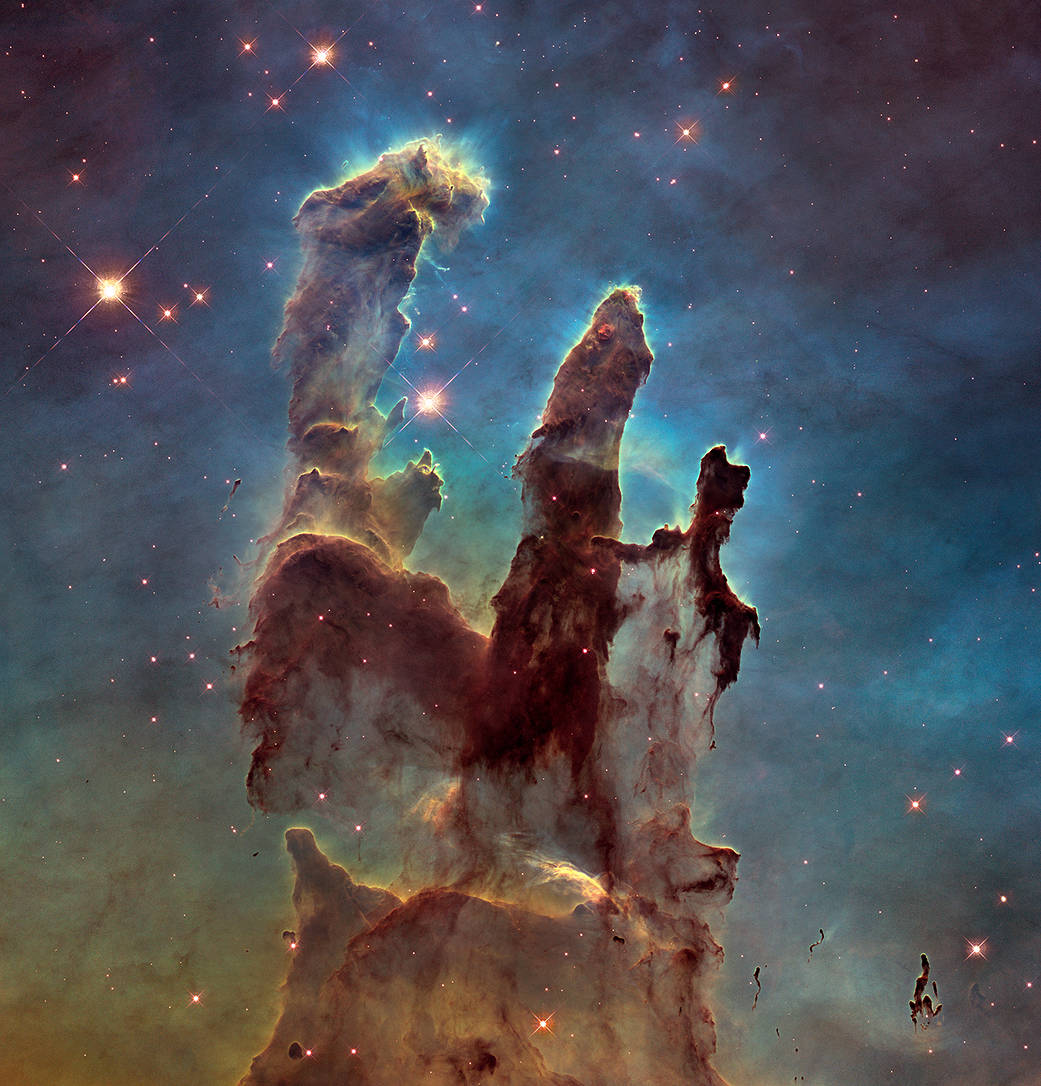 These towering tendrils of cosmic dust and gas sit at the heart of M16, or the Eagle Nebula. The aptly named Pillars of Creation, featured in this stunning Hubble image, are part of an active star-forming region within the nebula and hide newborn stars in their wispy columns.

Although this is not Hubble’s first image of this iconic feature of the Eagle Nebula, it is the most detailed. The blue colors in the image represent oxygen, red is sulfur, and green represents both nitrogen and hydrogen. The pillars are bathed in the scorching ultraviolet light from a cluster of young stars located just outside the frame. The winds from these stars are slowly eroding the towers of gas and dust.

Stretching roughly 4 to 5 light-years, the Pillars of Creation are a fascinating but relatively small feature of the entire Eagle Nebula, which spans 70 by 55 light-years. The nebula, discovered in 1745 by the Swiss astronomer Jean-Philippe Loys de Chéseaux, is located 7,000 light-years from Earth in the constellation Serpens. With an apparent magnitude of 6, the Eagle Nebula can be spotted through a small telescope and is best viewed during July. A large telescope and optimal viewing conditions are necessary to resolve the Pillars of Creation. – NASA.