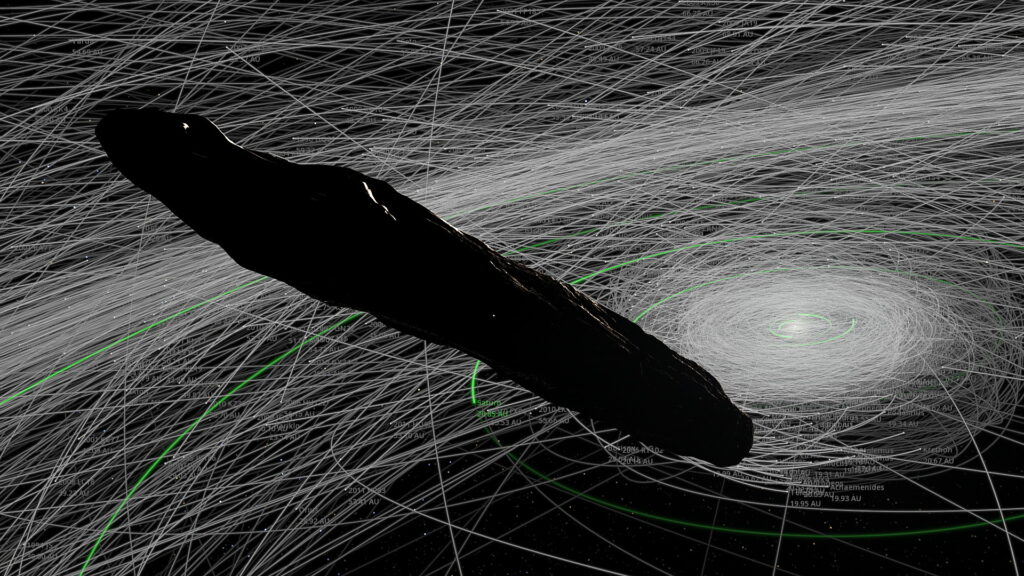 In my post last week, I showed the orbit of asteroid ‘Oumuamua in my Solar System section; I used SpaceEngine to create that image. When I fired-up SpaceEngine this week, I was still sitting at ‘Oumuamua. I enabled asteroid orbits, and my jaw nearly hit the floor! The torus of the main asteroid belt, and a wide swath of the Kuiper belt are easily visible! After some indeterminate amount of time just staring at it, I said “Well, I have to get a screen-shot of that!”

The Moon appears near the star Regulus in the constellation Leo, high in the southeastern sky after sunset on March 25th.

Stellarium has multiple skylore sets – several include constellation-lines and sky-artwork for different cultures and authors.

Seen with a far-infrared survey overlay, the constellation Leo appears with wispy clouds of the Interstellar Medium.

Jupiter and Saturn appear low above the southeastern horizon before dawn all week; Mercury, visible last week, is now lost in the glare of the Sun.

The Moon appears near the star Spica in the constellation Virgo, in the southeastern sky at midnight on March 29th.

The Summer Triangle is an asterism of the stars Deneb, Vega and Altair – it rises in the eastern sky before dawn.

The Moon is a waxing gibbous – visible to the southeast in early evening, and up for most of the night. This is a great time for telescope observing!

The Full Moon occurs on March 28th – rising at sunset, visible high in the sky around midnight, and visible all night.

After March 28th, the Moon will be a waning gibbous – rising after sunset, visible high in the sky after midnight, and visible to the southwest after sunrise.

On March 23rd, the shadow-play across Copernicus crater is fantastic! The shadows on the surrounds of the crater really make it look like a big “splat!” The double-crater to the south of Copernicus is interesting

Like water on Earth, water on the Moon is a precious resource. Unlike Earth’s water, the Moon’s is not fluid. It’s embedded within lunar soil or trapped as ice within the darkest craters. #WorldWaterDay https://t.co/RFxevISCn4 pic.twitter.com/fHjdxo0z0w

The Sun has 2 named sunspots, SpaceWeather.com says that “most of these northern sunspots are stable and quiet.”

Coronal loop activity, and coronal holes galore, again! The hole at the Sun’s south pole, and the coronal hole above it almost look like a sheet of wallpaper… weird!

Moderate prominence activity for the last couple days; you can a flare blowing off the bright region above the equator!

The Sun seen in 304 angstroms (extreme ultraviolet) March 22 2021:
Videos courtesy of NASA/SDO and the AIA, EVE, and HMI science teams.
You can view the Sun in near real-time, in multiple frequencies here: SDO-The Sun Now.
You can create your own time-lapse movies of the Sun here: AIA/HMI Browse Data.
You can browse all the SDO images of the Sun from 2010 to the present here: Browse SDO archive.

Unpredictable solar energetic particles speed out from the Sun and can impact spacecraft & astronauts. Scientists have traced three of these particle bursts to their source — helping us pinpoint their origins, and, maybe one day, predict their onset: https://t.co/DZpcnVZFAi pic.twitter.com/I9PiZHqAFl

For the position of the planets, and a boatload of asteroids in the outer solar system, see the image at the top of this post!

Away goes the debris shield, and here’s our first look at the helicopter. It’s stowed sideways, folded up and locked in place, so there’s some reverse origami to do before I can set it down. First though, I’ll be off to the designated “helipad,” a couple days’ drive from here. pic.twitter.com/E9zZGQk5jQ

Lots of activity next week as I get ready to drop off the helicopter for its test flights. It’s tucked underneath me behind a protective debris shield, which will be the first thing to go.

Here’s my team testing some of what’s coming up: pic.twitter.com/CWwtGw87EX

When maneuvering your big, heavy spacecraft near the Space Station, you move VERY SLOWLY!!!!

As Earth warms, it's important to know how carbon flows around the planet. This visualization shows carbon dioxide (CO2) moving between the air and sea with the help of ocean surface winds. Blue = ocean takes in CO2, red = ocean releases CO2. More info: https://t.co/tpO1YD2KZl pic.twitter.com/1JUMyDbnqZ

Have we mentioned that Hubble made the first detection of water vapor on a habitable-zone exoplanet?

The planet, K2-18b, is 110 light-years away and over eight times the mass of Earth: https://t.co/I3BhwQU54W#WorldWaterDay https://t.co/HG9ymLdbyy

For Teachers: Quiz – Precipitation and the Water Cycle:

Water is one of the main mediums through which we can observe the effects of climate change, from ice melt and sea level rise to freshwater availability. Quiz yourself on the water cycle and its crucial role in our global climate. #WorldWaterDay https://t.co/vgGxV5TfD7

A new nova in Cassiopeia, discovered on March 18th, is bright enough to see in a small telescope.https://t.co/LdgH6ESJn4 pic.twitter.com/q1J3nOWFZ0

Vertical structures, among the tallest seen in Saturn’s main rings, rise abruptly from the edge of Saturn’s B ring to cast long shadows on the ring in this image taken by NASA’s Cassini spacecraft two weeks before the planet’s August 2009 equinox.

Part of the Cassini Division, between the B and the A rings, appears at the top of the image, showing ringlets in the inner division.

In this image, Cassini’s narrow angle camera captured a 1,200-kilometer-long (750-mile-long) section arcing along the outer edge of the B ring. Here, vertical structures tower as high as 2.5 kilometers (1.6 miles) above the plane of the rings — a significant deviation from the vertical thickness of the main A, B and C rings, which is generally only about 10 meters (about 30 feet).

Cassini scientists believe that this is one prominent region at the outer edge of the B ring where large bodies, or moonlets, up to a kilometer or more in size, are found. It is possible that these bodies significantly affect the ring material streaming past them and force the particles upward, in a “splashing” manner.

This image and others like it (see PIA11669) are only possible around the time of Saturn’s equinox, which occurs every half-Saturn-year, or about every 15 Earth years. The illumination geometry that accompanies equinox lowers the sun’s angle to the ring plane and causes structures jutting out of the plane to cast long shadows across the rings. The “season” of equinox allows shadows to appear on the rings in the months before and after equinox, but the actual equinox occurred August 11, 2009, as the sun shone directly edge-on to the ring plane.

This view looks toward the southern, sunlit side of the rings from about 32 degrees below the ring plane.

The image was taken in visible light with the Cassini spacecraft narrow-angle camera on July 26, 2009. The view was acquired at a distance of approximately 336,000 kilometers (209,000 miles) from Saturn and at a sun-Saturn-spacecraft, or phase, angle of 132 degrees. Image scale is 2 kilometers (1 mile) per pixel.

The Cassini-Huygens mission is a cooperative project of NASA, the European Space Agency and the Italian Space Agency. The Jet Propulsion Laboratory, a division of the California Institute of Technology in Pasadena, manages the mission for NASA’s Science Mission Directorate, Washington, D.C. The Cassini orbiter and its two onboard cameras were designed, developed and assembled at JPL. The imaging operations center is based at the Space Science Institute in Boulder, Colo.

For more information about the Cassini-Huygens mission visit http://saturn.jpl.nasa.gov/. The Cassini imaging team homepage is at http://ciclops.org.

The last time I posted a image from Stellarium with a sky survey overlay, a reader asked me how to do that: press F2 (Configuration Window), click on the Surveys tab, check the survey(s) you want to see, wait for it!