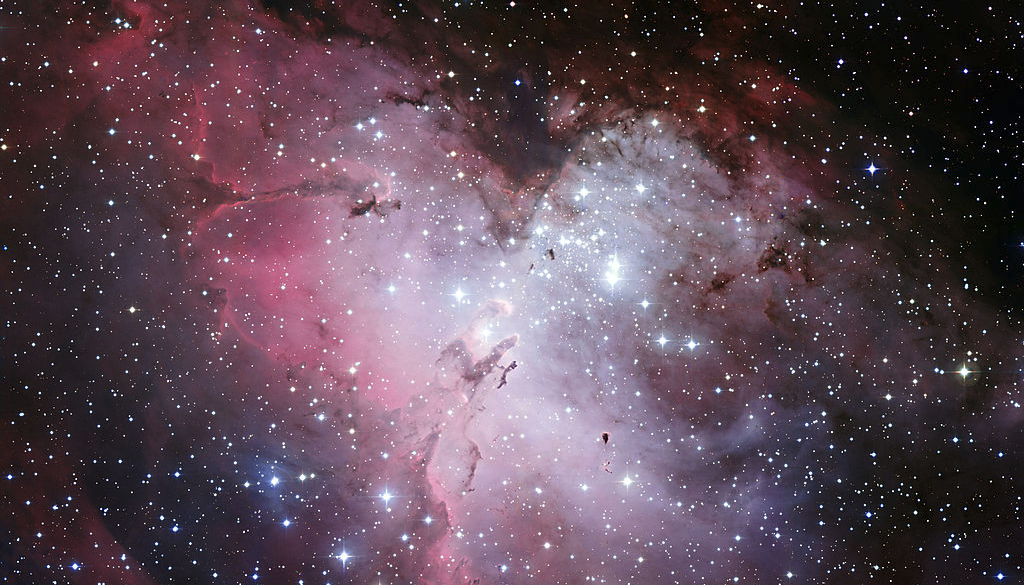 Working on M16 for today’s post, I was simply astounded at the size of the Pillars of Creation, which are small compared to the size of M16 as a whole. And then I thought about M16 being thousands of light years away! Every once in a while, the size of space creeps up on me and thwocks me in the back of the head – for a moment there, I was literally reeling.

Disappointment with figures one previously looked up to

Let’s just say I was a tad disappointed with this tweet:

Venus, Jupiter, Mars and Saturn continue to appear in the southeastern predawn sky all week.

The Moon appears near the star Antares in the southwestern predawn sky on May 17th.

The Moon appears in the constellation Sagittarius in the southern sky during the early morning hours on May 19th.

The Moon appears near Saturn in the southeastern predawn sky on May 22nd.

The Moon appears between Saturn and Mars in the southeastern sky during the early morning hours on May 23rd, and Jupiter will be a bit closer to Mars.

Did YOU see the total lunar eclipse? I saw thunderstorms in Michigan…

Eight named sunspots on the Sun’s face – a couple are patchy and distributed, and a couple are large and more concentrated.

Spaceweather.com says “Today, there are 8 sunspot groups on the solar disk–the most in years. Get ready for two more. NASA’s STEREO-A spacecraft is monitoring a pair of extreme ultraviolet hotspots behind the sun’s eastern limb. It is probably the glow of two more sunspot groups. The active regions will rotate into view by mid-week.”

Lots of coronal loops – you can see the coronal buckle when a flare goes off.

Flares flares everywhere, and prominences to boot! The Sun is flaring like crazy – bright active regions are sparking continuously. Both short and a few long-lived prominences on the Sun’s limb.

Position of the planets & several spacecraft in the inner solar system on May 17th:

Starliner is preparing for liftoff on May 19

This week’s nine new planets include three more close-in planets in the TOI-500 system, which lends support to the theory that planets form through gentle secular migration instead of highly eccentric migrations. Read the discovery paper by Serrano et al. 2022.

We’ve migrated the K2 Campaign 9 microlensing data from the Exoplanet Follow-up Observing Program (ExoFOP) site. Executed in 2016, K2C9 was designed to simultaneously observe gravitational microlensing events from space with the Kepler telescope and from Earth with ground-based telescopes to see a parallax effect in the shape and time of the lensing events. The

Read the documentation and access the data set from the ExoFOP-K2 Campaign 9 page. (The Contributed Data page also links to the new page.)

Two of our animated movies based on our pre-generated plots now include more recent archive data:

You can always find these movies on our Pre-generated Plots page, which also contains data plots of current archive data that are ready for use in presentations and publications. All plots are available in a colorblind-friendly palette as well, and some can be customized further using Filtergraph, a data visualization tool developed at Vanderbilt University.

Messier 16 (M16), the famous Eagle Nebula, is a star-forming nebula with a young open star cluster located in Serpens. M16 lies near the borders with the constellations Sagittarius and Scutum. The nebula is best known for the Pillars of Creation region, three large pillars of gas famously photographed by Hubble in 1995.

Also known as the Star Queen Nebula, M16 lies at a distance of 7,000* light years from Earth and has an apparent magnitude of 6.0. The cluster’s designation in the New General Catalogue is NGC 6611, while the nebula is referred to as IC 4703. – messier-objects.com

The Eagle Nebula occupies an area 70 by 55 light years in size, or 30 arc minutes of the sky, while the open cluster has a radius of 15 light years, corresponding to 7 arc minutes in angular diameter.

The name Eagle comes from the nebula’s shape, which is said to resemble an eagle with outstretched wings. American astronomer Robert Burnham, Jr. introduced the name Star Queen Nebula because the nebula’s central pillar reminded him of a silhouette of the Star Queen. – messier-objects.com

Messier 16 is home to several regions of active star formation. These include the famous Pillars of Creation in the central part of the nebula and the Stellar Spire, located just to the left of the pillar structure.

The largest of the three Pillars of Creation is approximately 4 light years high. The Stellar Spire, a large tower of gas that appears to be coming off the region of nebulosity, is about 9.5 light years high, corresponding to a length of 90 trillion kilometres. This is roughly twice the distance from the Sun to the nearest star system, Alpha Centauri. – messier-objects.com

Every once in a while I get reminded how big space is – this is one of those times. The Pillars of Creation are enormous, but they are small part of the much larger Eagle Nebula!