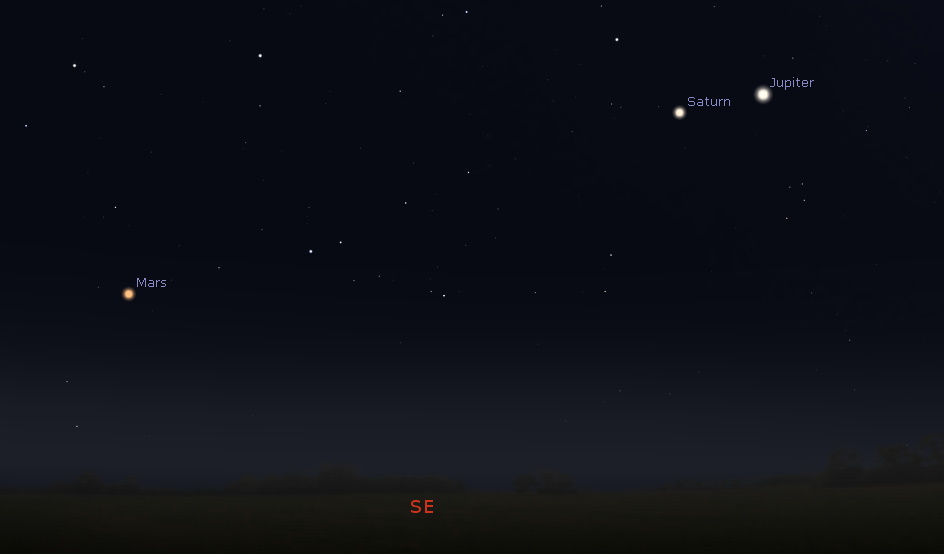 Mars continues to pull away from Saturn and Jupiter in the southeastern predawn sky this week. Credit: Stellarium / Bob Trembley.

Mercury and Venus in the west-northwestern sky are joined by a thin crescent Moon at sunset on May 23-25th.

The new Moon occurs on May 22nd.

After May 22nd the Moon will be a waxing crescent, visible toward the southwest in early evening.

Moon News: NASA unveils new rules to guide behavior in space and on the lunar surface

As @NASA leads a coalition of nations to the Moon, safety, transparency, and coordination are paramount. Hence, the Artemis Accords:https://t.co/liHjCpTQEk

The Sun has 2 spots rotating into view – you can see the active regions in the videos below – both above and below the equator on the left-hand side. Coronal holes remain open at both poles, and s smaller hole appears between the equator and the south pole.

Lots of prominence activity on the Sun with these two active regions rotating into view. 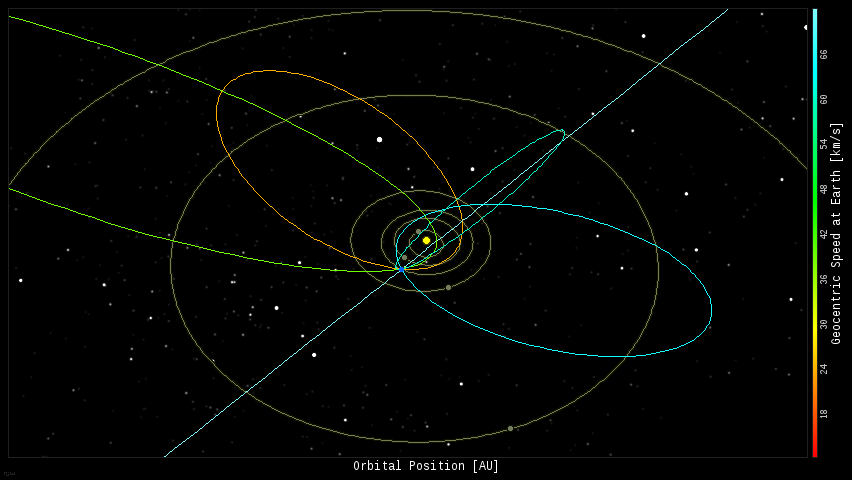 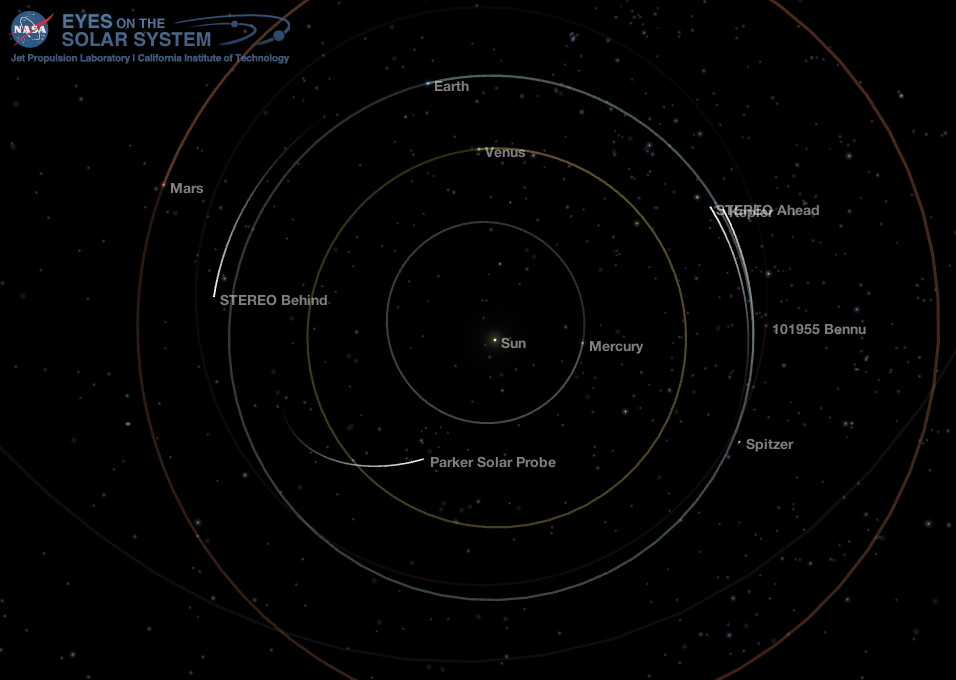 Position of the planets and a couple spacecraft in the inner solar system, 2020-05-19. Credit: NASA Eyes on the Solar System / Bob Trembley. 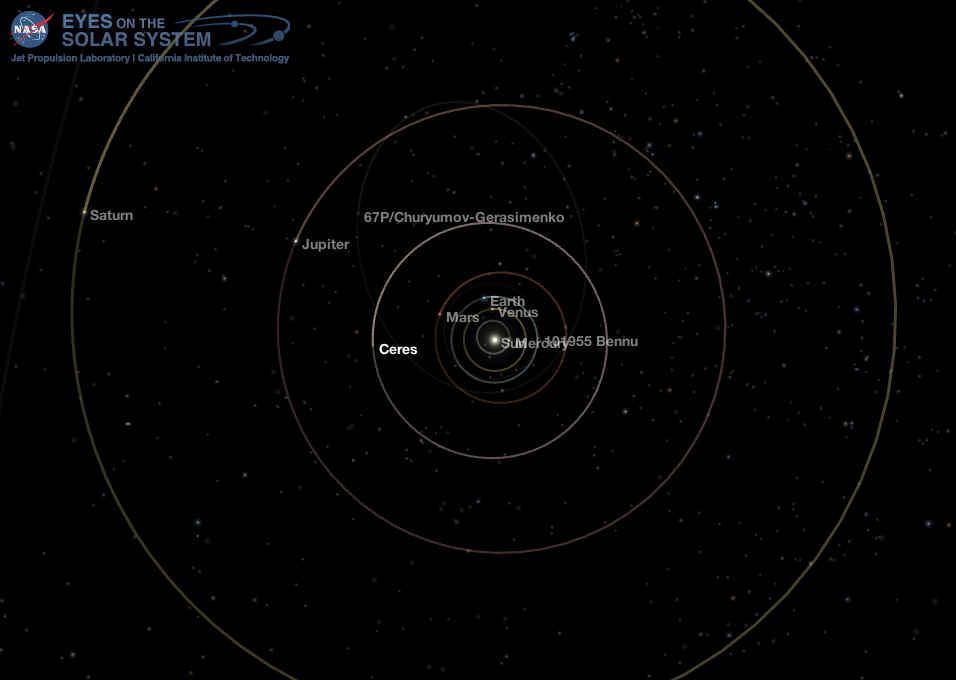 Position of the planets in the middle solar system, 2020-05-19 – the orbit of dwarf planet Ceres. Credit: NASA Eyes on the Solar System / Bob Trembley. 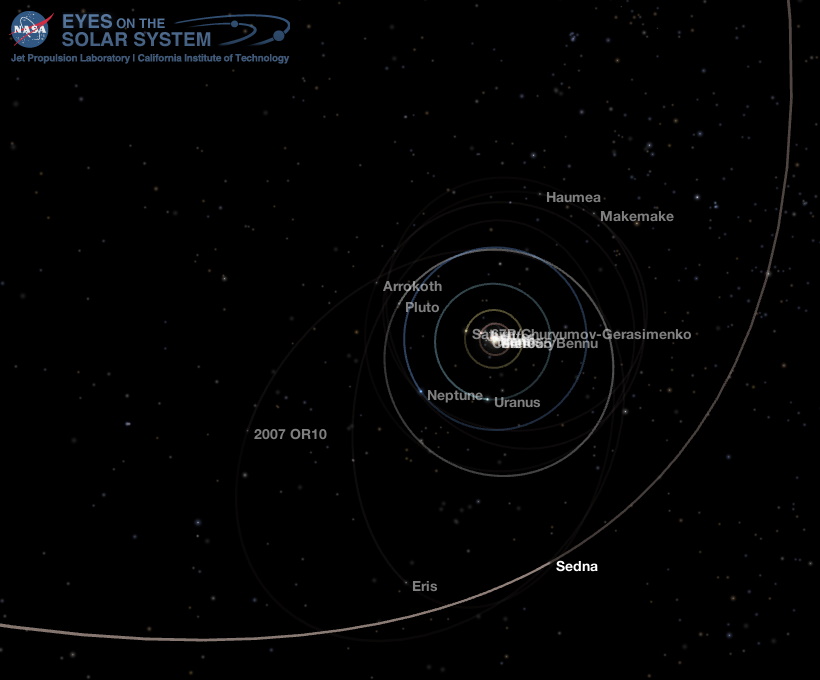 Position of the planets in the outer solar system on 2020-05-19 – the orbit of dwarf planet and transneptunian object Sedna is highlighted. Credit: NASA Eyes on the Solar System / Bob Trembley.

Plant growth has been researched for many years aboard the @Space_Station!?#SpaceStation20th#OTD in 2017, @AstroPeggy photographed Chinese cabbage plants during the Veg-03 experiment, which tested out a plant water delivery system. https://t.co/1Odc2Zq8B7 pic.twitter.com/laoxTXNxto

Japan’s next mission to resupply the station is “go” to launch Wednesday at 1:30pm ET. The Exp 63 studied how planetary surfaces might affect future spacecraft. Read more… https://t.co/UHpHJxgK4K pic.twitter.com/hYsOZh1i2E

#HubbleFriday This Hubble image captures the beautiful spiral galaxy NGC 5861, located about 85 million light-years away in the constellation Libra. The galaxy has hosted two known supernovae, one discovered in 1971 and the other in 2017: https://t.co/cIrKTI7RTa pic.twitter.com/3RdSF5Q8kA

I’ve teamed up with @NASAHubble and the ground-based @GeminiObs observatory to probe the powerful storms on Jupiter, including the "radio light show" produced by lightning flashes up to three times more energetic than Earth's largest bolts. See more: https://t.co/w3SkTkHiZS pic.twitter.com/jT7Ni5PqgJ

Want to popularize your space missions? Get them added into Kerbal Space Program!

The first new @KerbalSpaceP scenario is based on @BepiColombo. Players attempt to reach orbit and land on 'Moho', the equivalent of Mercury in the ‘Kerbal universe’, while performing various scientific tasks from the actual ESA/JAXA mission.

Late night treat. First draft of a time lapse showing Comet #67P as seen by #Rosetta over 90 minutes on 4 June 2015. As the comet rotates, different parts of the surface are exposed to sunlight & the inner coma changes.

Initial results from a new NASA satellite suggest that winter Arctic sea ice has thinned by as much as 20% since 2008, contrary to existing studies that find sea ice thickness has remained relatively constant in the last decade. https://t.co/L5orZO9TLF

This one IS spacecraft news… kinda… A new KSP update is due out July 1 will include content mirroring two actual ESA missions!

Yes, we are adding comets to the game!
?

Shining a #darkskyfriendly light on the next judge in our #CaptureTheDark Contest: @mikeshawphoto.
Mike is an @IDADarkSky Delegate & Resident Artist at @BellMuseum exploring novel VR/AR experiences for making the #nightsky & #lightpollution more accessible to the general public. pic.twitter.com/lCgPYY3ess

Continuing with my visual tour of nearby stars and their systems, we travel to the Struve 2398 star system, 11.6 light years distant. 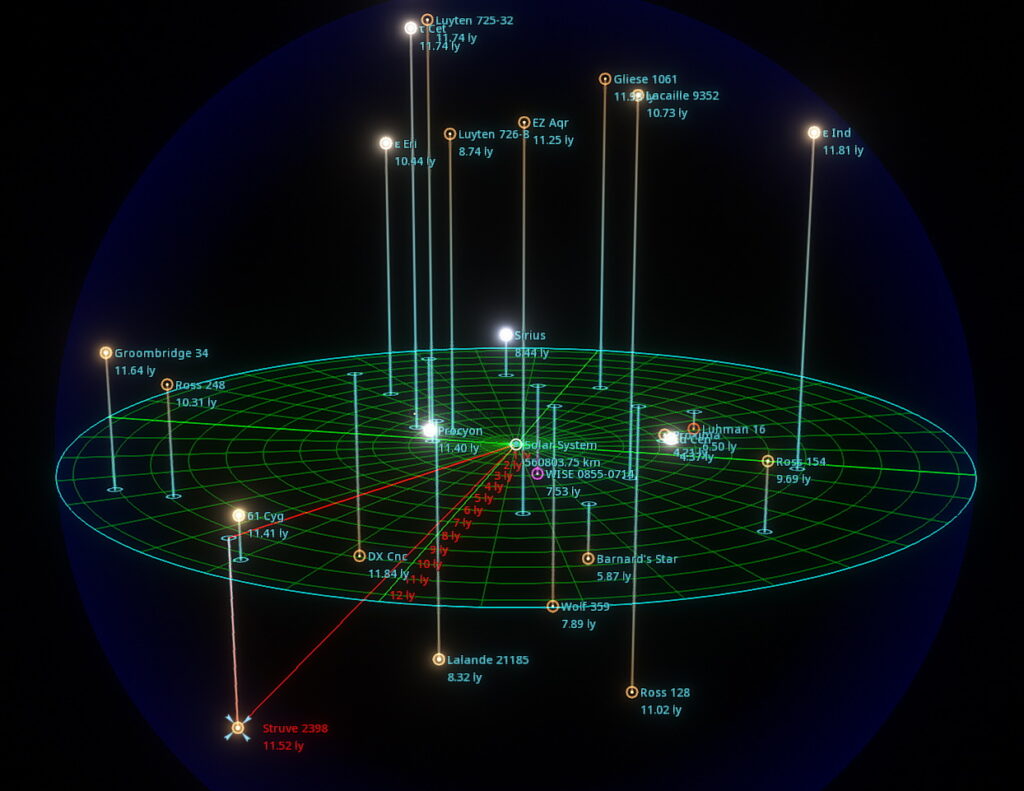 Distance to Struve 2398 from Sol; the plane (green) is aligned with the orientation of the plane of the Milky Way galaxy. Credit: SpaceEngine / Bob Trembley.

Struve 2398 (Gliese 725) is a binary star system in the northern constellation of Draco. Struve 2398 is star number 2398 in the Struve Double Star Catalog of Baltic-German astronomer Friedrich Georg Wilhelm von Struve. The astronomer’s surname, and hence the star identifier, is sometimes indicated by a Greek sigma, Σ. Although the components are too faint to be viewed with the naked eye, this star system is among the closest to the Sun. Parallax measurements by the Hipparcos spacecraft give them an estimated distance of about 11.6 light years away.

Both stars are small red dwarfs, with each having around a third the Sun’s mass and radius. They each display the type of variability common to flare stars, and their active surfaces are sources of X-ray emission. The orbital period for the pair is about 295 years, with an average distance of about 56 astronomical units, and the eccentricity of their orbit is 0.70.

The pair has a relatively high proper motion of 2.2 arc seconds per year. The system is on an orbit through the Milky Way that has an eccentricity of 0.05, carrying them as close as 8 kpc and as far as 9 kpc from the Galactic Center. The plane of their galactic orbit carries them as far as 463−489 pc away from the galactic plane. – Wikipedia 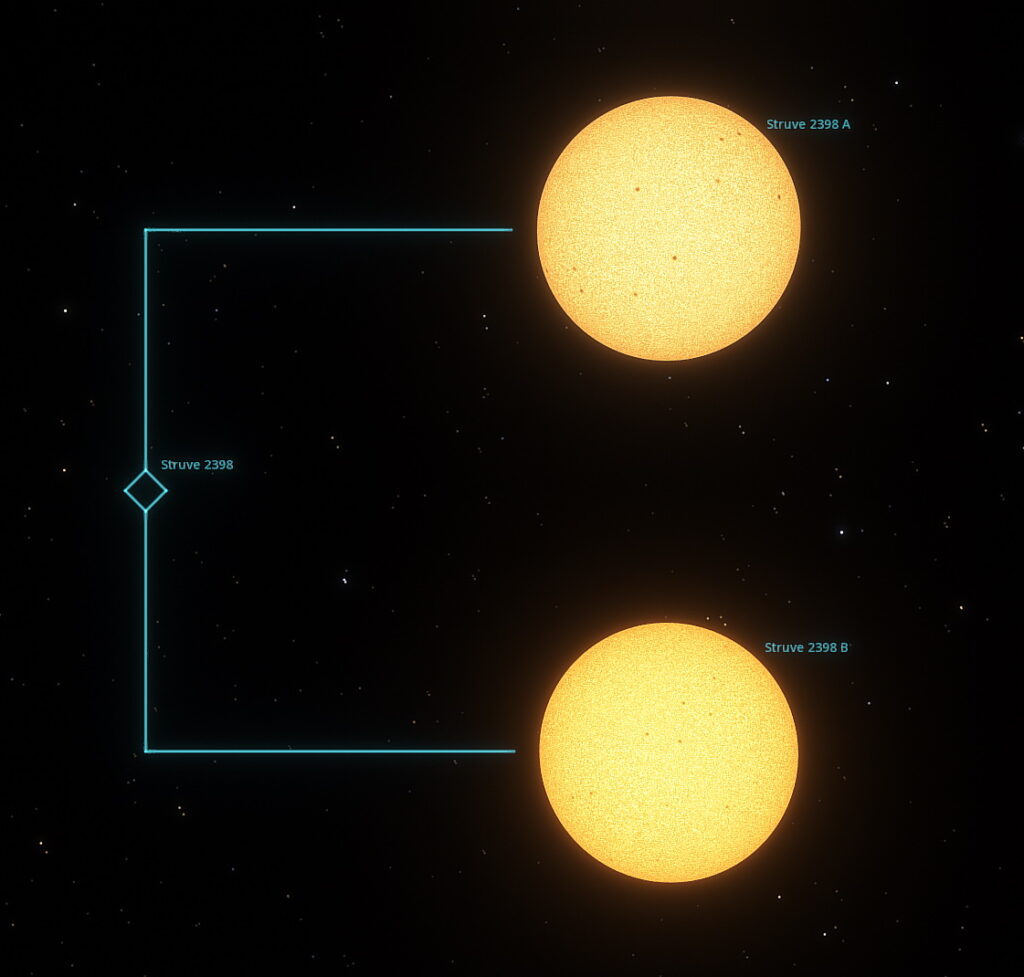 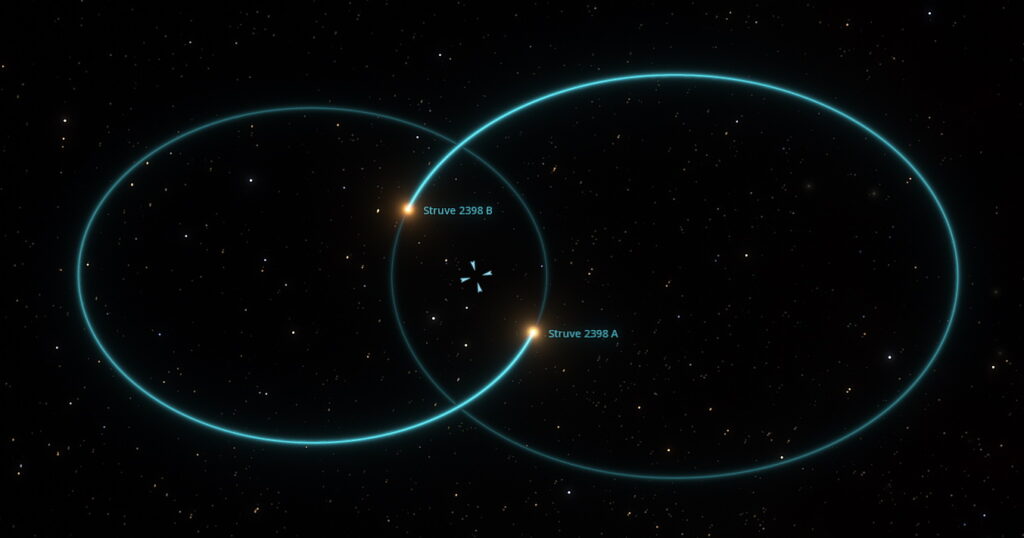 Top-down view of the orbits of the stars in the Struve 2398 star system – the system barycenter is highlighted. Credit: SpaceEngine / Bob Trembley. 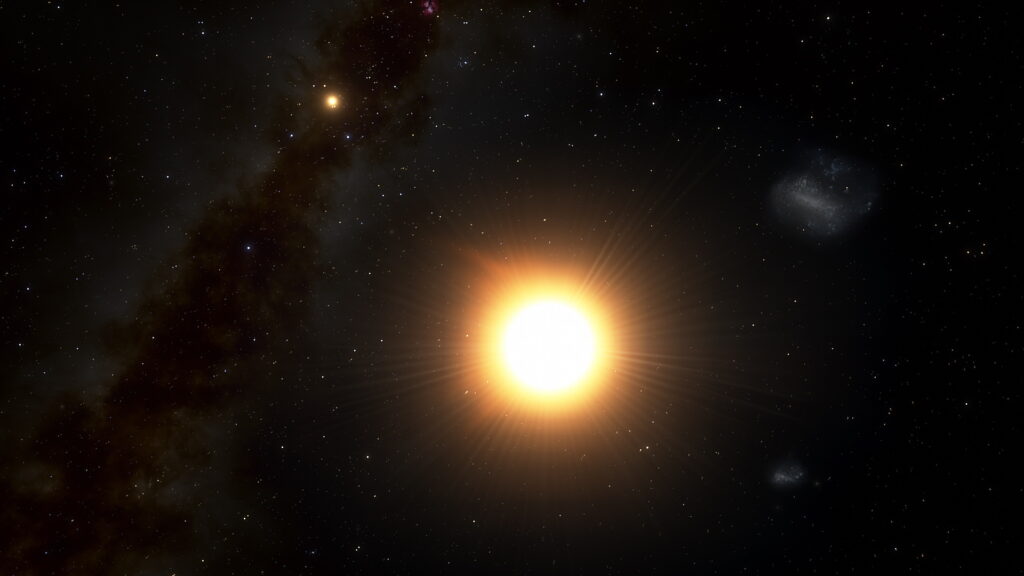