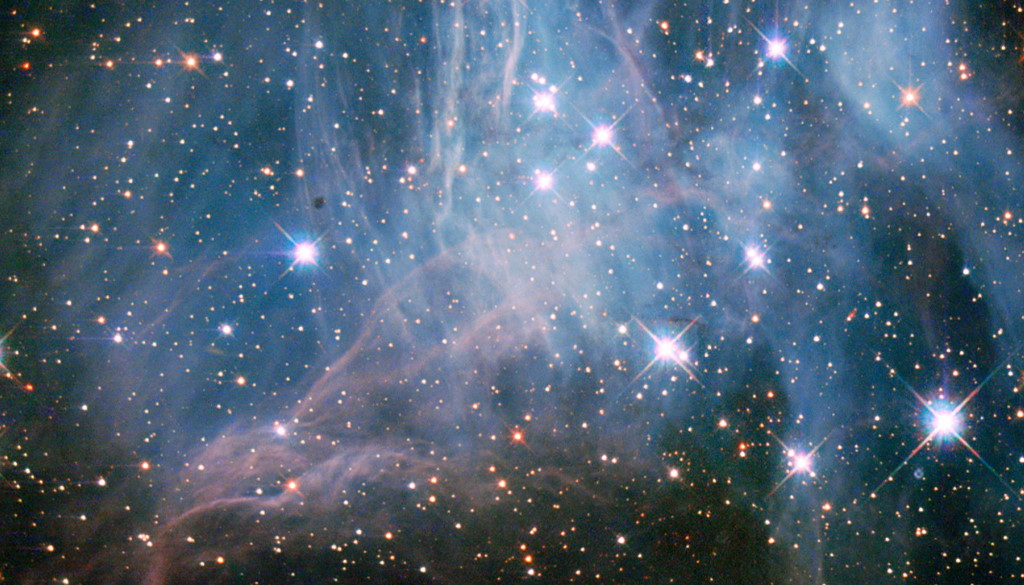 Yesterday, I gave yet another remote presentation to my wife’s middle-school astronomy students; this time it was my lecture about the Sun. I’ve given this lecture dozens of times – I really enjoy blowing people’s minds discussing the Sun’s inner workings and features. Before she left for school, my wife was lamenting about what to teach this week; there are state exams, and a half-day on Friday, so her schedule was completely messed up.

“Would you like me to present something this week? I asked.

My eyes got wide – that was in 2 hours. OK then! I quickly updated my presentation with images of the Sun that day.

This week, the “broken record” of me mentioning that “Jupiter and Saturn appear in the southeastern predawn sky” is slightly altered by the Moon visiting the two planets on May 31st and June 1st.

.Jupiter, Saturn and the Moon appear nearly overhead a few hours before dawn from Lady Frere, South Africa on May 31st.

Mars, Mercury and Venus appear above the western horizon after sunset.

Mercury and Venus are in conjunction on May 29th – appearing less than 1 degree apart in the sky.

The Moon appears near the star Antares in the southern sky in the early morning hours on May 27th.

So, I guess this “Star comparison with the Sun” is something I’m doing now; to create the image below, I fired up Universe Sandbox and plopped Antares down, and then plopped the Sun down next to it. I could barely see the Sun in front of the background stars of the Milky Way, so I turned the background completely off – and it was still hard to see the Sun!

To be honest, after I plopped the two stars down, I just sat there and gawked at this image on my large screen for a few minutes.

I wanted to show the Sun as more than a just a few pixels, so I zoomed way in and moved the Sun really close to Antares.

The Moon is a Waxing Gibbous – visible to the southeast in early evening, and up for most of the night.

The Full Moon occurs on May 26th – rising at sunset, visible in the sky around midnight, and visible all night.

After May 26h, the Moon will be a Waning Gibbous – rising after sunset, visible high in the sky after midnight, and visible to the southwest after sunrise.

Spaceweather.com reports: “GEOMAGNETIC STORM WATCH: On May 22nd, sunspot AR2824 unleashed a sequence of solar flares unlike anything we’ve seen in years. In only 24 hours, NASA’s Solar Dynamics Observatory recorded 10 C-flares and 2 M-flares: movie. The rapidfire explosions hurled multiple overlapping CMEs into space. According to NOAA models, a combined CME will hit Earth’s magnetic field during the late hours of May 25th, potentially sparking G2-class geomagnetic storms on May 26th.”

Intense coronal loop activity with flares around sunspot 2824, smaller but very active loops over 2825 too. The northern coronal hole has widened and merged with a large coronal hole that is stretching towards the equator.

Prominences everywhere! Seen at this frequency, the flares sunspot 2824 is throwing off are easily visible!

Position of the planets & several spacecraft in the inner solar system on May 25th:

China’s Rover on the Surface of Mars!

I’ve done skip reentries in Kerbal Space Program – both intentional, and not…

This reminds me of the kinds of aurora my wife and I used to see in Michigan’s Upper Peninsula – doming overhead.

I should suggest to the condo neighborhood I live in to get dark-sky friendly lighting.

This site is REALLY COOL and great for science teachers teaching Earth science / earthquakes / volcanoes. You can zoom-in to anywhere on the Earth, and run an animation of earthquakes. You can select an area, and see an interactive 4D view of earthquakes in that area. http://seismic-explorer.concord.org/

I commented that it would be REALLY COOL to be able to see this kind of data for the Moon and Mars… but that would take a LOT of sensors… which aren’t there… Can we please fix that?

These bright stars shining through what looks like a haze in the night sky are part of a young stellar grouping in one of the largest known star formation regions of the Large Magellanic Cloud (LMC), a dwarf satellite galaxy of the Milky Way. The image was captured by the NASA/ESA Hubble Space Telescope’s Wide Field Planetary Camera 2.

The stellar grouping is known to stargazers as NGC 2040 or LH 88. It is essentially a very loose star cluster whose stars have a common origin and are drifting together through space. There are three different types of stellar associations defined by their stellar properties. NGC 2040 is an OB association, a grouping that usually contains 10–100 stars of type O and B — these are high-mass stars that have short but brilliant lives. It is thought that most of the stars in the Milky Way were born in OB associations.

There are several such groupings of stars in the LMC, including one previously featured as a Hubble Picture of the Week. Just like the others, LH 88 consists of several high-mass young stars in a large nebula of partially ionised hydrogen gas, and lies in what is known to be a supergiant shell of gas called LMC 4.

Over a period of several million years, thousands of stars may form in these supergiant shells, which are the largest interstellar structures in galaxies. The shells themselves are believed to have been created by strong stellar winds and clustered supernova explosions of massive stars that blow away surrounding dust and gas, and in turn trigger further episodes of star formation.

The LMC is the third closest galaxy to our Milky Way. It is located some 160 000 light-years away, and is about 100 times smaller than our own.

This image, which shows ultraviolet, visible and infrared light, covers a field of view of approximately 1.8 by 1.8 arcminutes.

A version of this image was entered into the Hubble’s Hidden Treasures Image Processing Competition by contestant Eedresha Sturdivant. Hidden Treasures is an initiative to invite astronomy enthusiasts to search the Hubble archive for stunning images that have never been seen by the general public.