Starlink Satellites Cause a Stir

SpaceX has launched the first 60 of a planned 12,000 Starlink satellites, intended to provide global broadband internet service. Despite assurances to the contrary, a train of bright lights has been seen crossing the night sky, along with some reports of Iridium-like flares. Astronomers and observatories are understandably concerned, with some expressing concern that this could “ruin the night sky.”

I’m more concerned about any effect this might have on asteroid discovery and planetary defense; needless to say, I’ll be following this developing story closely.

Mars will soon be lost on the glare of the sunset in the west-northwestern sky.

Mars may be behind trees and buildings in the west-northwestern sky at sunset. Credit: Stellarium / Bob Trembley.

Saturn and Jupiter continue to be visible in the southern predawn sky all week; Jupiter rises in the southeast around 10:00 PM. 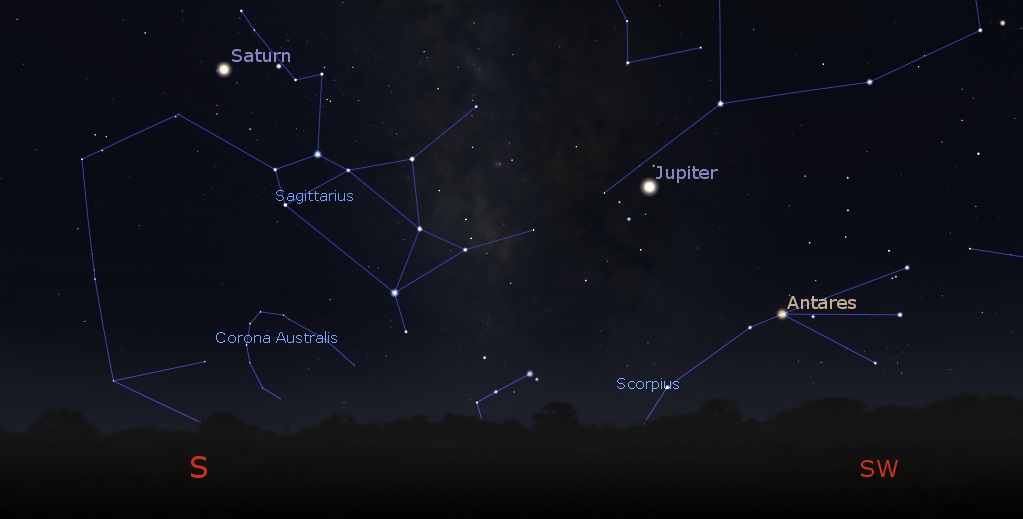 Saturn and Jupiter are high in the southern predawn sky all week. Credit: Stellarium / Bob Trembley.

A thin waning crescent Moon appears low in the eastern predawn sky for the next few days; I saw this out my kitchen window while making coffee this morning. 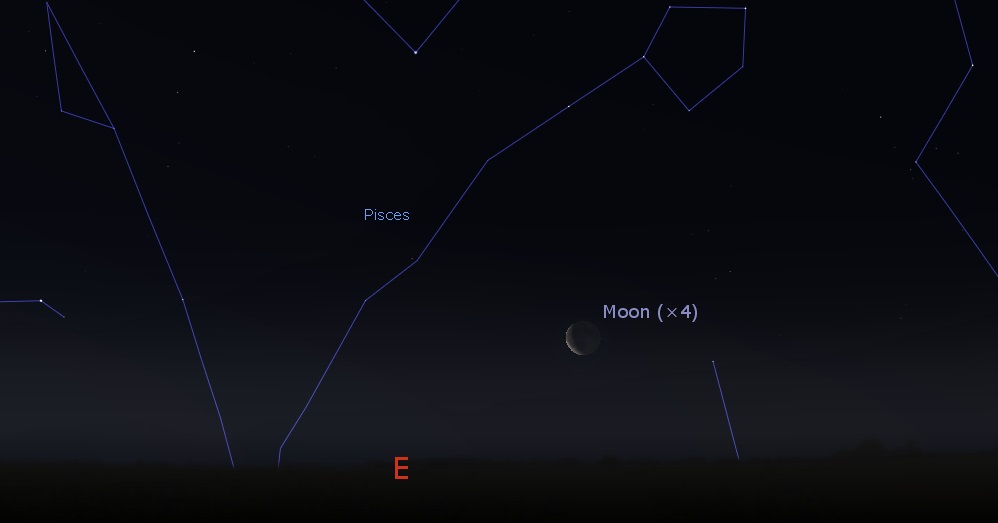 I first became aware of Scott Manley when I ran across his Asteroid Discovery video on YouTube in 2012; it completely blew me away; I show this every time I give my asteroids lecture – near the end, someone in the audience always says “Wooh!”

Scott has updated his Asteroid Discovery video several times, but I prefer his narrated version; the latest version with music is here:

#Moon2024 News: While at @FloridaTech today, I will announce the commercial partner we selected to develop and build the first segment of @NASA’s Gateway outpost – the power and propulsion element. Here’s how you can watch starting at 1pm ET: https://t.co/YVCNIeUfDs pic.twitter.com/IVhCvFOiqf

#NASA #NAC #HEO Some of the science that can be collected by going to the Moon, just because we have been there before does not mean we know everything about it. Its the closest place to visit to understand what the Solar System was like billions of yrs ago. pic.twitter.com/UR8fGvbR3g

The Sun is once again spot-free, and has been for 9 days. Coronal holes remain open at both poles, and disperse holes stretch from the south pole up past the equator.

SpaceWeather.com says: “A minor interplanetary shock wave hit Earth on May 26th at approximately 22:00 UT. The CME-like disturbance was unexpected. It caused the density of the solar wind around Earth to abruptly quadruple, while the interplanetary magnetic field doubled in strength. Earth’s magnetosphere was rattled by the impact, but it did not spark a geomagnetic storm.”

Eclipses let us study the Sun & Earth — and the fundamental physics of the universe! 100 years ago tomorrow, scientists made measurements that supported Einstein's theory of general relativity, providing evidence that light is bent by very massive objects. https://t.co/iRLLldulL3 pic.twitter.com/PZj3ZuBpLA

How do you trace the solar wind back to its source on the Sun? ☀️? You need a magnetic map ? of the Sun's surface, a computer model ? of the magnetic field in the corona, and spacecraft measurements ? of the solar wind as it speeds towards Earth. https://t.co/E7r0pexGzY pic.twitter.com/cXklZMh4x7

Congratulations to Scott Manley for having an asteroid named after him!

Asteroid (33434) Scottmanley = 1999 FU
Discovered 1999 Mar. 17 by ODAS at Caussols.
Scott Manley (b. 1972) is a popular science communicator, best known for his videos on youtube combining science and games. Formerly an astrophysicist, he studied asteroid collisions at Armagh Observatory and created visualizations of the main belt and near earth asteroids.

Scott’s video tutorials have taught countless numbers of Kerbal Space Program players how to build and fly rockets – myself included!

WOW!!! Impressive view of the very bright #fireball over Southern Australia last week 21st of May….Have you ever seen anything like it??? Video ?by Rodolfo Martin Vrenes Salvatierra #severeweather #ExtremeWeather pic.twitter.com/jUSvHX9WJV

Magnetic tornadoes on Mercury. Dust storms on Mars. Jupiter’s Great Red Spot. Earth is not the only planet that has extreme weather. ?️Take a tour of storms across the solar system & prepare your #askNASA questions for #NASAScience Live at 3pm ET: https://t.co/z02apivnNR pic.twitter.com/0ktf4H4uPI

This image shows the end of the boulder spine that runs from Bennu's equator down to the south pole.

Mostly, though, I just wanted to point out that lil white spot in the middle of the rock at the bottom. That rock's feeling cute.

Want to join us on an interplanetary adventure? ?

Our #Mars2020 Rover is gearing up for its seven-month journey to the Red Planet and you can send your name along for the ride. Get your boarding pass: https://t.co/mX7bZ5Ev6g pic.twitter.com/FkUTR7tGqf

@AmericaView state member @UTView, has developed an "Utah as Art" exhibit that will travel around the state of #Utah to teach students about the diverse Utah landscape and #RemoteSensing. The project is funded by @USGS and uses @USGSLandsat data. pic.twitter.com/1hEnBImBBA

I haven’t posted a “Something as Art” post in a while… I need to fix that!

Study: NASA’s estimate of Earth's long-term temperature rise in recent decades is accurate to within less than a tenth of a degree Fahrenheit, providing confidence that past and future research is correctly capturing rising surface temperatures. https://t.co/4FrQ20LNuY pic.twitter.com/8OWAGZbK0M

Calling SpaceEngine “a game” does it no justice! I’ve created stunning imagery with SpaceEngine – which I’ve recently started including in this post every week. I’ve shown SpaceEngine to astronomy clubs, and at science fiction conventions; I showed SpaceEngine during a lecture to the Warren Astronomical Society, and (completely unintentionally) showed Mercury’s double-sunrise! I recently gave a presentation at a Science Fiction Convention – using SpaceEngine I gave a tour of the Solar System, and a few well-known locations within the Milky Way galaxy.

Check out the official gameplay trailer for #KSP #BreakingGroundExpansion, launching 30th May on PC! ??? pic.twitter.com/pXb2vYDhMQ

I’m excited beyond reason about this expansion for KSP! Robotics has been available in KSP as a community MOD for a while, but this DLC will be supported by the developers; I could see a “virtual” robotics for beginners class being taught using this.