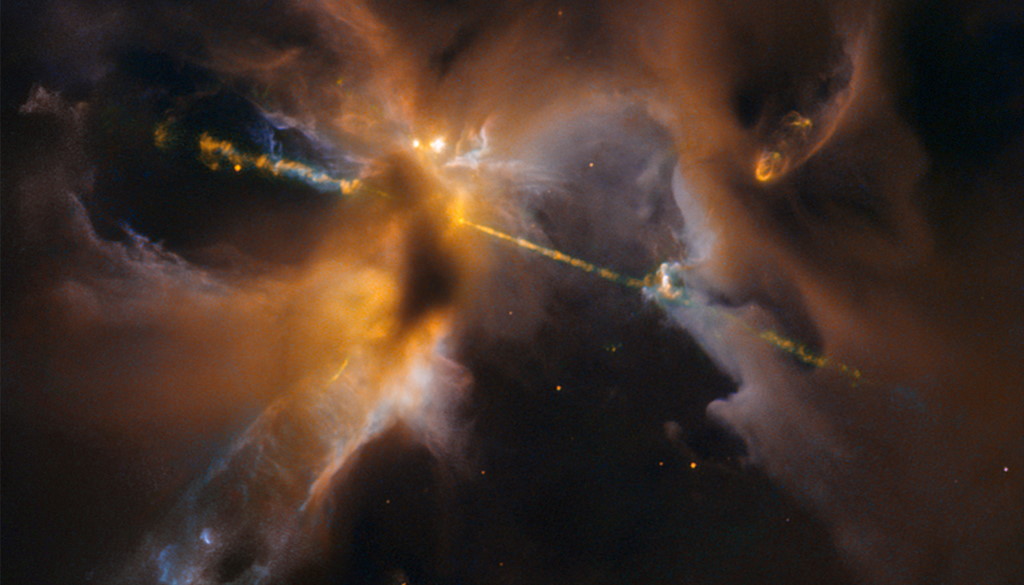 After a hiccup, the Ingenuity rovercraft has flown a fourth time in Mars’ thin atmosphere – rising to 5 meters, flying south and returning for a round trip of 266 meters.

The fifth flight will have Ingenuity go on a one-way mission, landing at a new site. If Ingenuity remains healthy, the next demonstration phase will begin. The helicopter can attempt to perform aerial observations of rover science targets, image potential rover routes, view inaccessible features, and capture stereo images for digital elevation maps.

Something that was mentioned during the Warren Astronomical Society meeting last night is the possibility that dust may collect on the solar panels, and Ingenuity might not survive being immobile for the couple of weeks when Mars is at solar conjunction during the fall, and radio communications with all Mars spacecraft is impossible.

Jupiter and Saturn appear in the southeastern predawn sky all week; the waning crescent Moon appears in conjunction with Jupiter on May 4th and 5th.

Mars appears above the constellation Orion in the western sky after sunset.

At midnight, the constellations Lyra and Hercules appear in the eastern sky.

I was wondering where Mercury and Venus were, so I turned off the atmosphere in Stellarium – they’re right there at sunset – completely lost in the glare of the Sun.

The Moon is a Waning Crescent – visible low to the east before sunrise.

The New Moon occurs on May 11th.

Two intense regions of coronal loop activity are rotating out of view, while another rotates into view. Both the northern and southern coronal holes are medium-large sized, and there are several small coronal holes peppering the Sun’s face. There are also multiple… I don’t know what to call them… coronal pathways, maybe… snaking across the Sun’s face. I can’t recall seeing anything like this before!

Several large prominences on the Sun’s limb, and a days-long filament stretching across the southern hemisphere.

Position of the planets & several spacecraft in the inner solar system on May 4th.

I reported on this exoplanet during the “In the News” segment of last night’s Warren Astronomical Society meeting!

This image was featured on Spaceweather.com on April 4th:

“BLACK AURORAS OVER SCOTLAND: Red. Green. Purple. These are the colors we usually see during any display of auroras. On April 18th, Alan C. Tough of Hopeman, Moray, Scotland saw something else. “Black,” he says. In the photo below, “note the dark vertical strip above the green band, which is devoid of any normal auroral colour.”

Black auroras have been seen before. They are dark rings or black blobs that sometimes appear in an otherwise ordinary expanse of auroral light. Some researchers call them “anti-auroras.” The black auroras in Tough’s photo are circled here.

When stars form within giant clouds of cool molecular hydrogen, some of the surrounding material collapses under gravity to form a rotating, flattened disk encircling the newborn star.

Though planets will later congeal in the disk, at this early stage the protostar is feeding on the disk with a Jabba-like appetite. Gas from the disk rains down onto the protostar and engorges it. Superheated material spills away and is shot outward from the star in opposite directions along an uncluttered escape route — the star’s rotation axis.

Shock fronts develop along the jets and heat the surrounding gas to thousands of degrees Fahrenheit. The jets collide with the surrounding gas and dust and clear vast spaces, like a stream of water plowing into a hill of sand. The shock fronts form tangled, knotted clumps of nebulosity and are collectively known as Herbig-Haro (HH) objects. The prominent HH object shown in this image is HH 24.

Just to the right of the cloaked star, a couple of bright points are young stars peeking through and showing off their own faint lightsabers — including one that has bored a tunnel through the cloud towards the upper-right side of the picture.