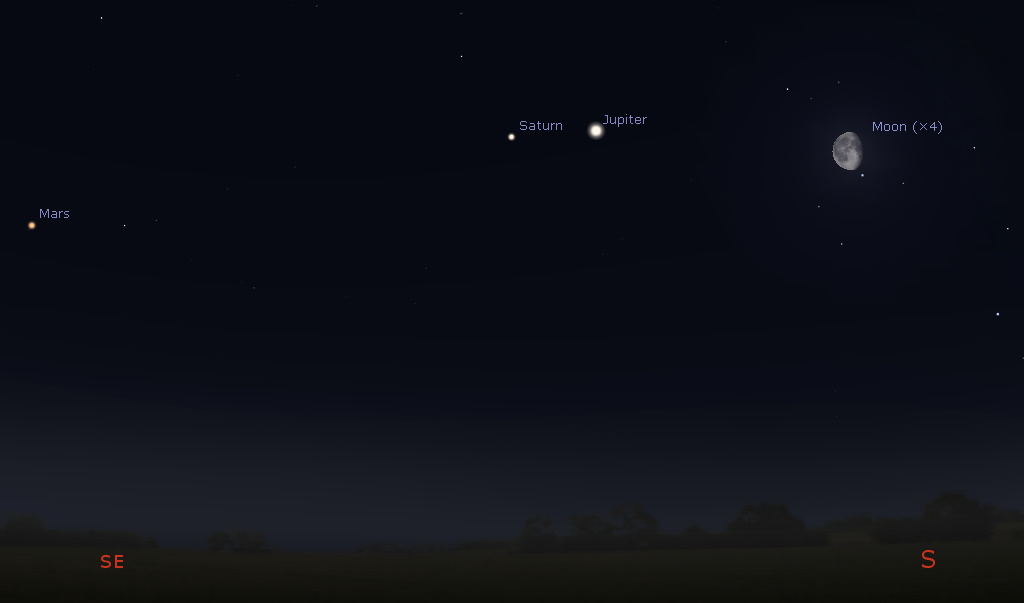 Libraries across the U.S. are looking for online presentations by NASA/JPL Solar System Ambassadors and NASA Night Sky Network members; my wife is having me give my presentation about the Sun (and possibly a tour of the solar system using SpaceEngine) to her science classes using Google Hangouts Meet. If you are an astronomy presenter and you have the equipment to present remotely, you may want to contact libraries and schools in your area to see if they would like you to do an online presentation.

Mars continues to pull away from Saturn and Jupiter in the southeastern predawn sky; the Moon joins the early morning planets at the beginning of next week.

Mars, Saturn and Jupiter in the southeastern predawn sky this week. The Moon joins the planets early next week for a couple days. Credit: Stellarium / Bob Trembley.

Venus appears a bit lower each evening at dusk in the western sky. 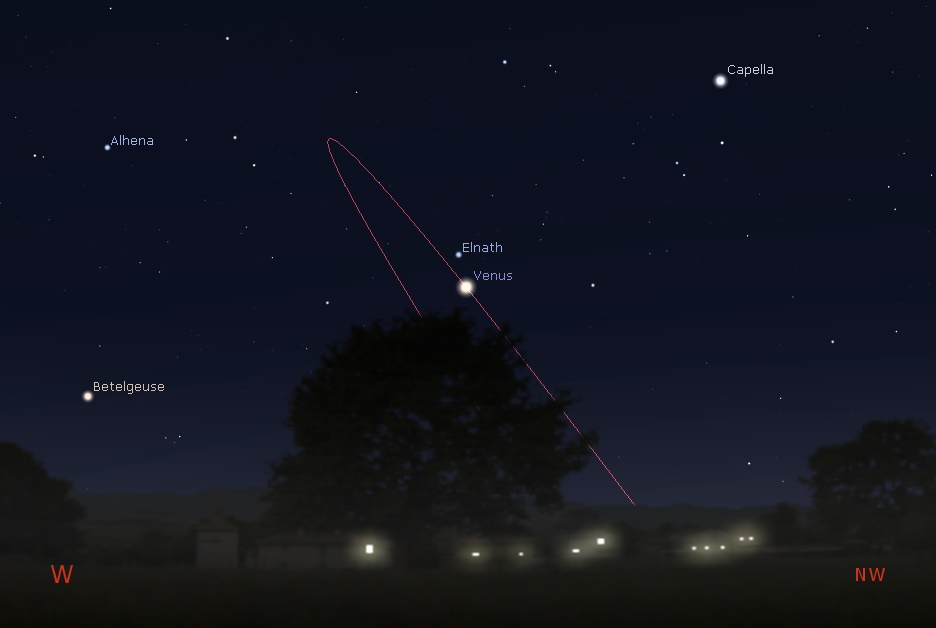 Venus appears a bit lower than last week above the western horizon after sunset – the orbit of Venus is shown in red. Credit: Stellarium / Bob Trembley.

Early next week, comet C/2019 Y4 (ATLAS) will be in the same general region of the sky as Venus, however it will probably not be as spectacular as the depiction in the image below. Use the image below as a guide where to point your binoculars or telescopes. 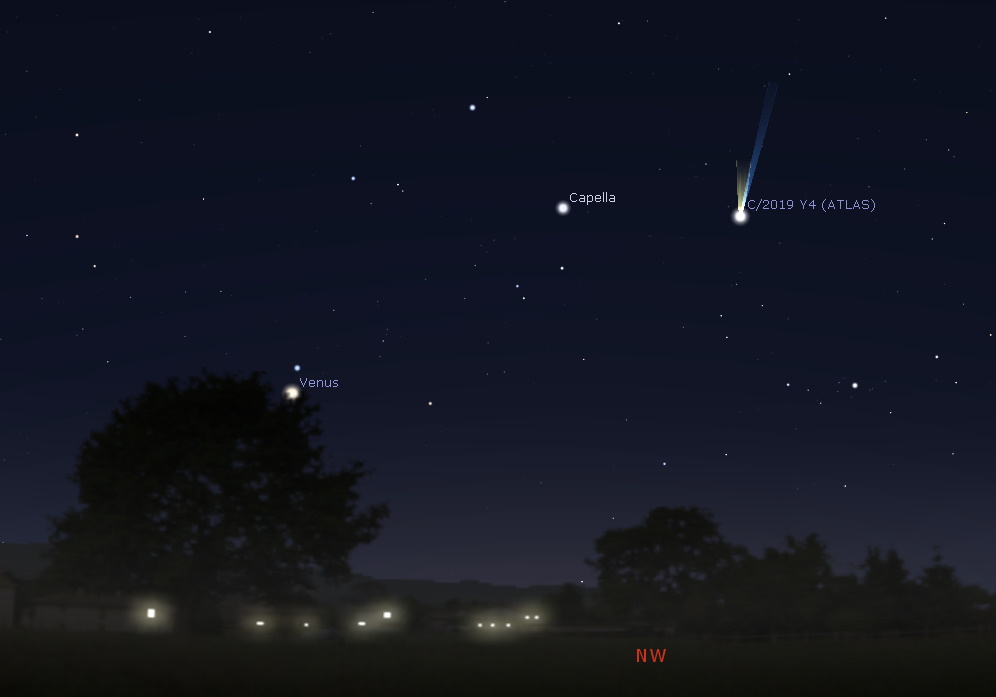 The Moon appears near the star Spica in the southern sky at midnight on May 6th. 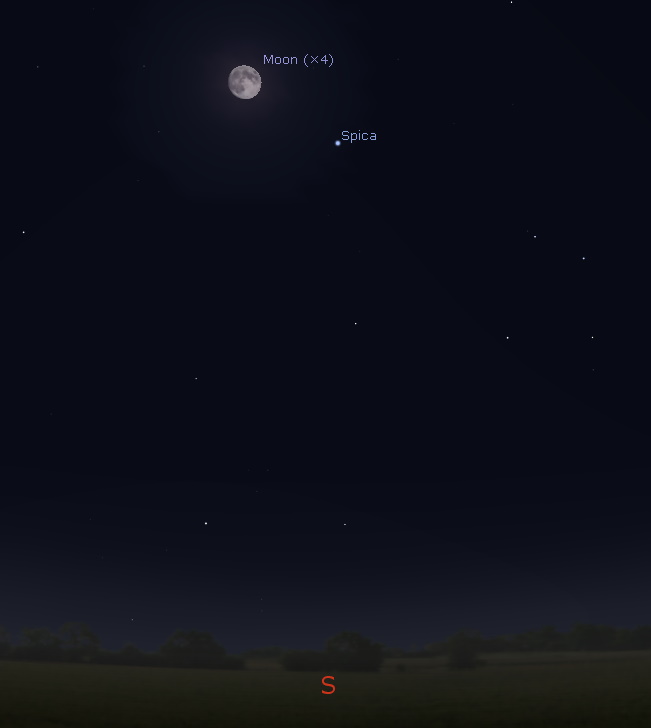 The Moon appears near the star Spica in the southern sky at midnight on May 6th. Credit: Stellarium / Bob Trembley.

The Moon appears near the star Antares in the southwestern predawn sky on May 9th. 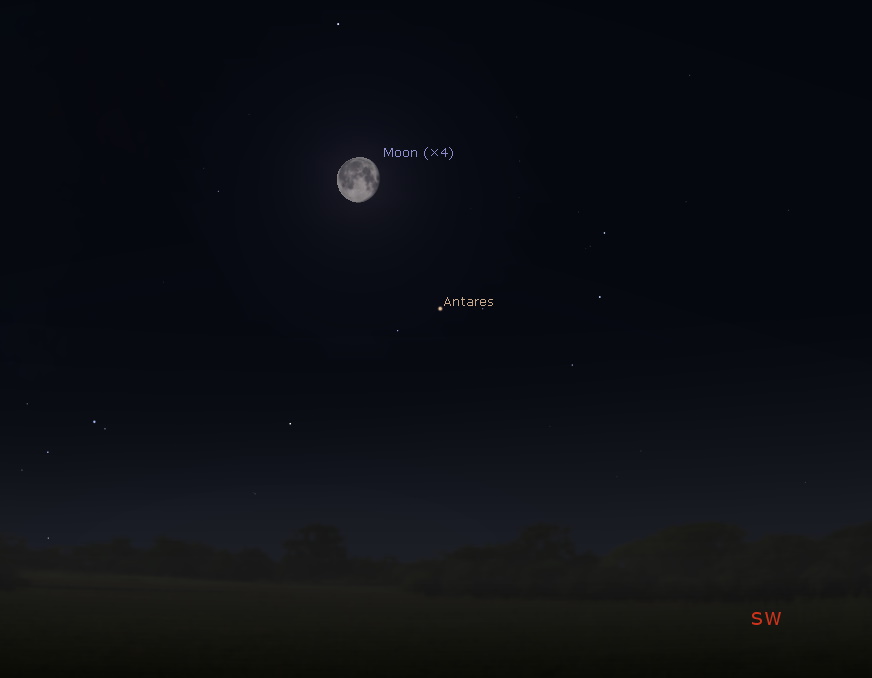 The Moon appears near the star Antares in the southwestern predawn sky on May 9th. Credit: Stellarium / Bob Trembley.

The full Moon occurs on May 7th; the Moon rises at sunset, is visible high in the sky around midnight, and is visible all night.

After May 7th, the Moon will be a waning gibbous, rising after sunset, visible high in the sky after midnight, and visible to the southwest after sunrise.

Our #Artemis astronauts will be landing on the Moon in style ?

Here are the three companies that were selected to provide human landing services to the Moon. https://t.co/8x2wlMLN0U pic.twitter.com/GHGGdEnJfc

The Sun has been spotless for 3 days. Coronal holes remain open at both poles – the southern coronal hole has a snake-like tendril reaching up towards the equator.

We got a monster prominence! A beautiful, long-lived looping prominence on the Sun for the last couple days.

On May the Forth, NASA All Sky Fireball Network reported 16 fireballs.
(8 eta Aquarids, 8 sporadics)

This is the reentry, last night at 4:45 UT (6:45 local Spanish time), of the Russian Soyuz rocket Upper Stage that launched the Progress MS-14 cargoship to the International Space Station on April 25. Time and general location match the CSpOC TIP message for this reentry. https://t.co/cbjO26f5u6 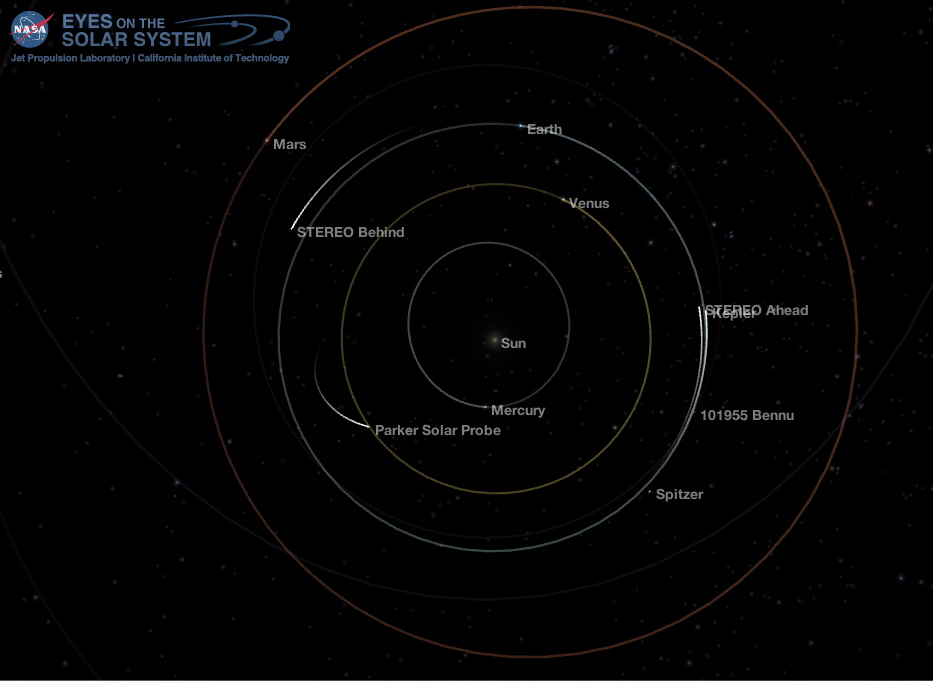 Position of the planets and a couple spacecraft in the inner solar system, 2020-05-04. Credit: NASA Eyes on the Solar System / Bob Trembley. 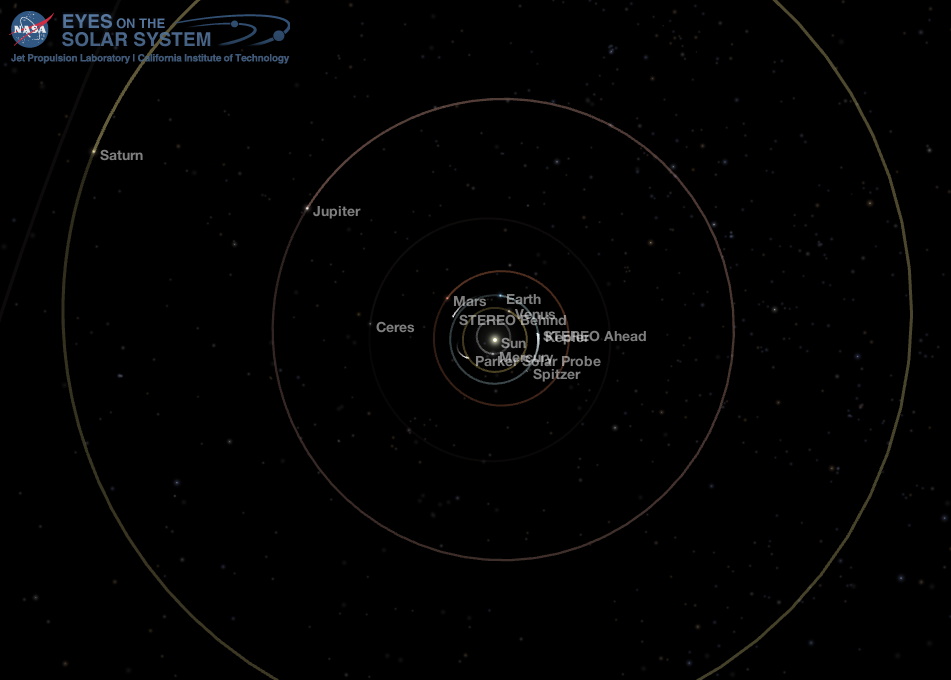 Position of the planets in the middle solar system, 2020-05-04. Credit: NASA Eyes on the Solar System / Bob Trembley. 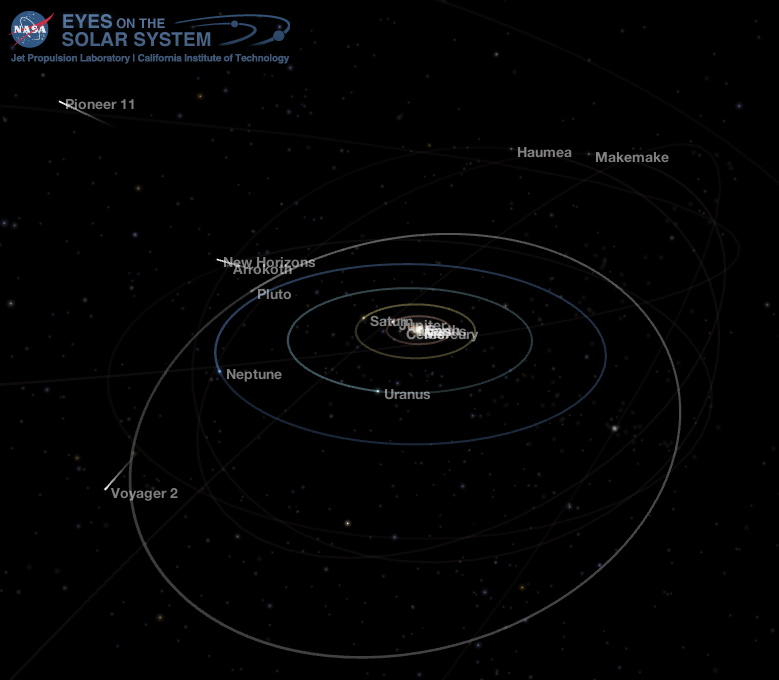 Position of the planets in the outer solar system on 2020-05-04. Credit: NASA Eyes on the Solar System / Bob Trembley.

It's been 7 years since the name “Bennu” was bestowed upon my favorite rocky asteroid!

The asteroid is named after the ancient Egyptian bird deity, Bennu, who is linked with the Sun, creation and rebirth.

1/6 Here it is! The anniversary image of #Hubble30 features the giant nebula NGC 2014 and its neighbour NGC 2020, part of a vast star-forming region in the Large Magellanic Cloud.
Credit: @NASA / @ESA and @stsci https://t.co/iO1vnUPyls pic.twitter.com/pxsP5jdX4c

My team at @NASAJPL & @DLR_en continues to take encouragement from our latest efforts to #SaveTheMole. Another push with my robotic arm has helped the mole keep pushing onward. Taking it one step at a time, and reaching out to help where I can. pic.twitter.com/Xkriknbdc0

Learn about #Mars and my mission from home, with lessons, activities, and even some new quizzes and games created by our partners on my seismometer team @InSight_IPGP. It’s all available for students, teachers and learners of any age, over at: https://t.co/NWxEqGoyRK pic.twitter.com/9hQReBDyjl

Thanks to all astronomers – amateur & professional alike – from around the world who observed the #BepiColombo Earth flyby on 10 April (and later too) and shared their great images! Our jury was very impressed with all entries ?

Launched not that long ago (2018), in an orbit not that far away… this GEDI (NASA’s Global Ecosystem Dynamics Investigation) uses powerful lasers to craft 3D maps of Earth's forests & topography from a perch aboard the @Space_Station. #MayThe4thBeWithYou https://t.co/4PeteCvXBQ pic.twitter.com/tMkHNMYFoQ

How to fix light pollution in a few pictures: 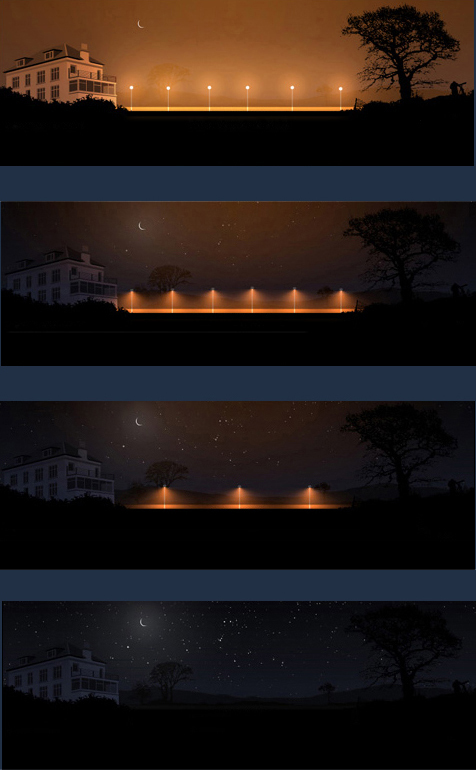 We are excited to announce the discovery of #GW190412, the first binary #BlackHoles merger detected by @LIGO and @ego_virgo with clear evidence for unequal mass components. Read all about it at https://t.co/RKdgwoqE7k #GravitationalWaves pic.twitter.com/jt5ZvFfeCl

Another SuperNova (2020ftl) discovered on April 2, 2020 in NGC 4277. Discovered by Catalina Real-Time Transient Survey and Mirco Villi (USA, Italy). This one is a Type Ia. Current magnitude estimates are 14.3
Image taken April 26, 2020 pic.twitter.com/xMCyoZFpE1

Continuing with my visual tour of nearby stars and their systems, we travel to the Procyon star system, 11.46 light years distant. 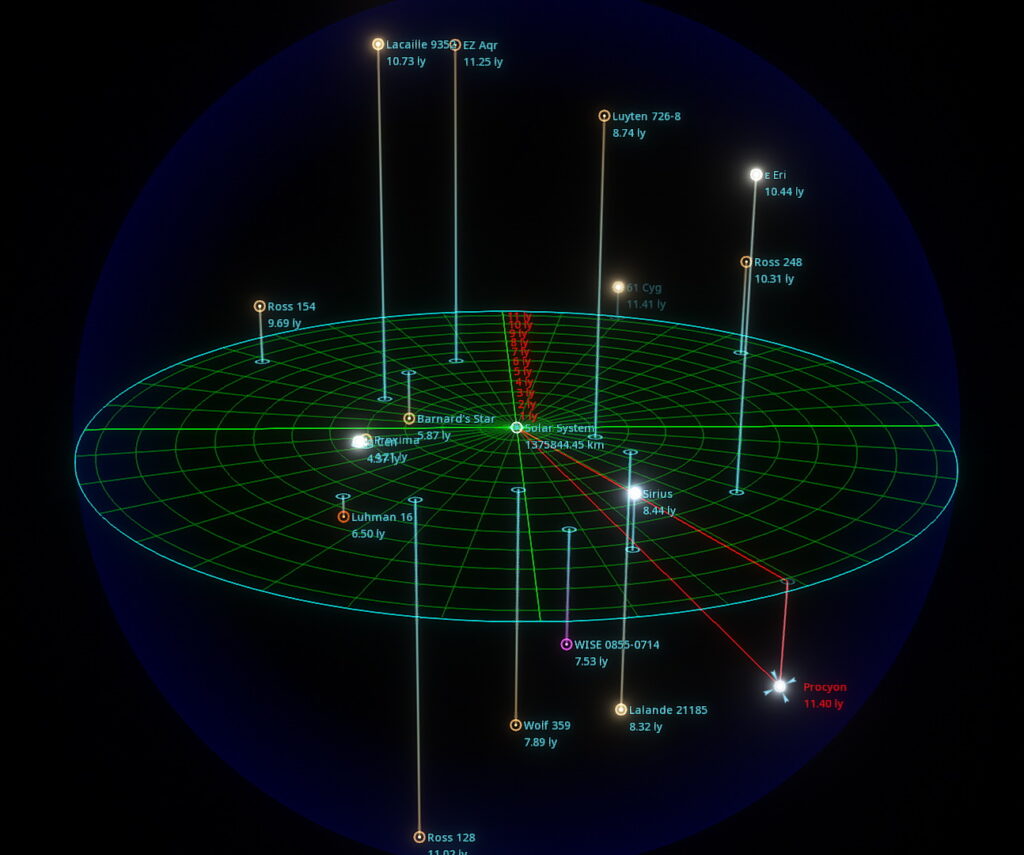 Distance to Procyon from Sol; the plane (green) is aligned with the orientation of the plane of the Milky Way galaxy. Credit: SpaceEngine / Bob Trembley.

Procyon (α CMi, α Canis Minoris, Alpha Canis Minoris) is the brightest star in the constellation Canis Minor. To the naked eye, it appears to be a single star, the eighth brightest in the night sky with a visual apparent magnitude of 0.34.

The reason for its brightness is not its intrinsic luminosity but its relative closeness to the Sun. Its distance was worked out by the European Space Agency Hipparcos astrometry satellite. It is just 11.46 light-years (3.51 parsecs) away, and is one of our nearest stellar neighbours. Its closest neighbour is Luyten’s Star, about 1.12 ly (0.34 pc) away.

Procyon forms one of the three vertices of the Winter Triangle, along with Sirius and Betelgeuse. Its colour index is 0.42, and its hue has been described as having a faint yellow tinge to it. – Wikipedia 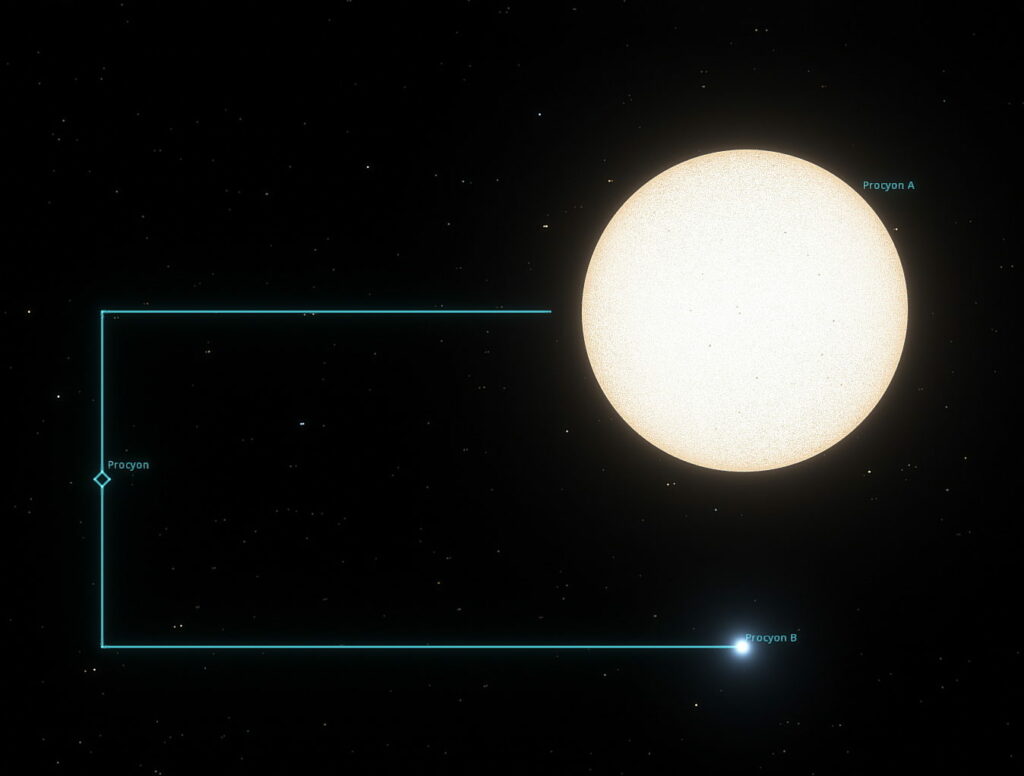 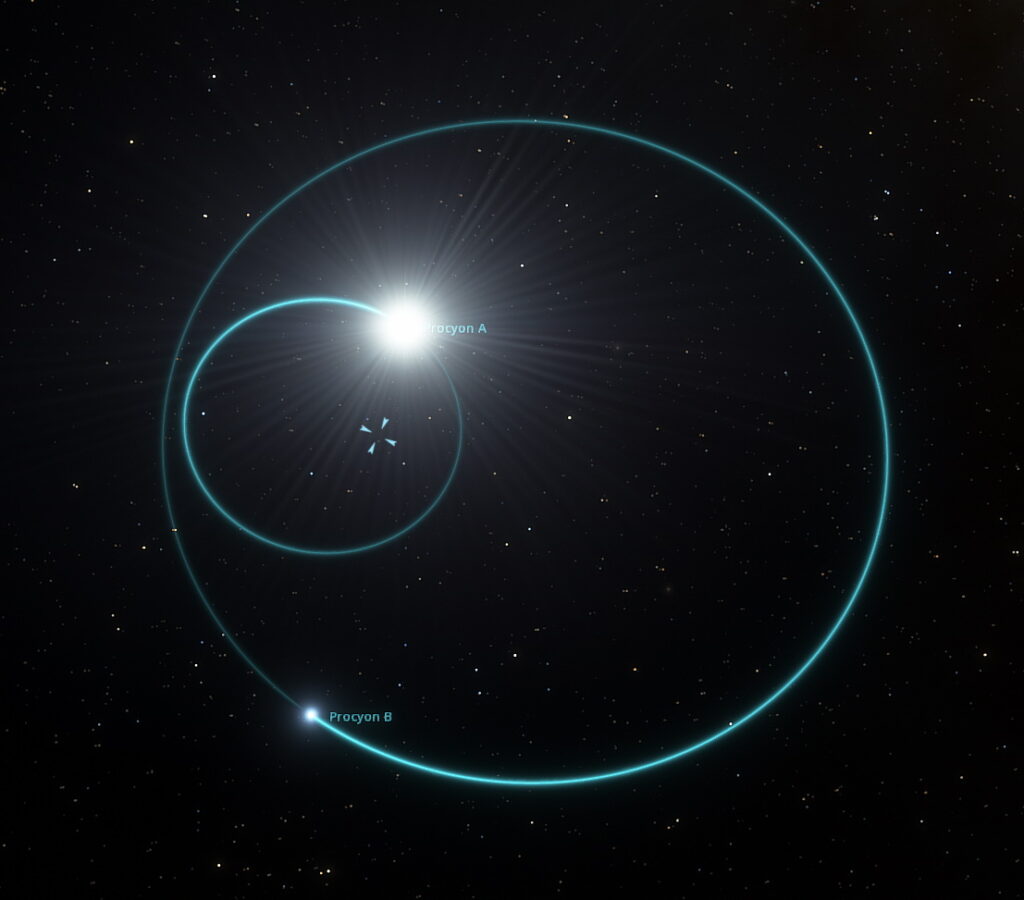 Top-down view of the orbits of the stars in the Procyon star system – the system barycenter is highlighted. Credit: SpaceEngine / Bob Trembley. 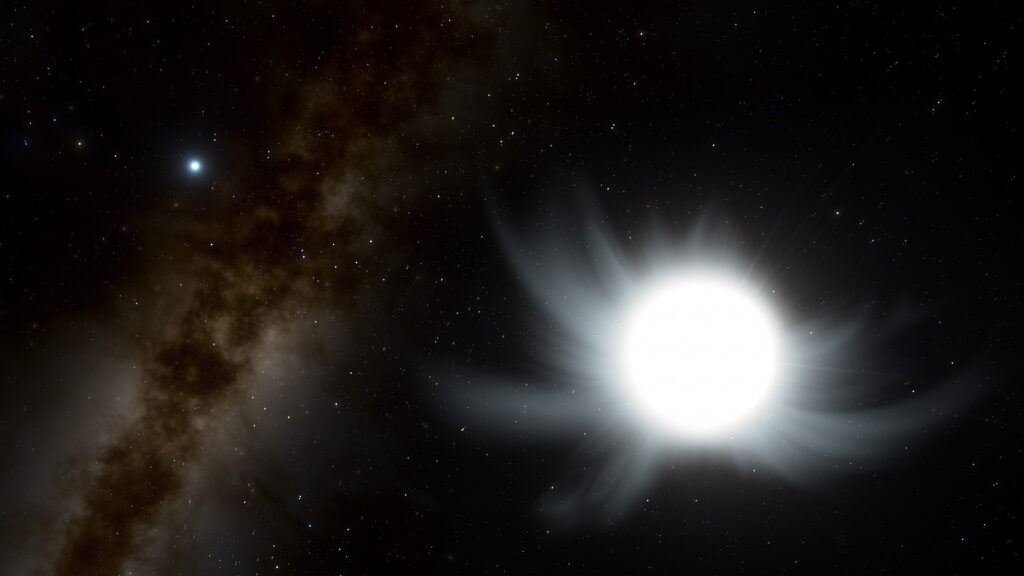