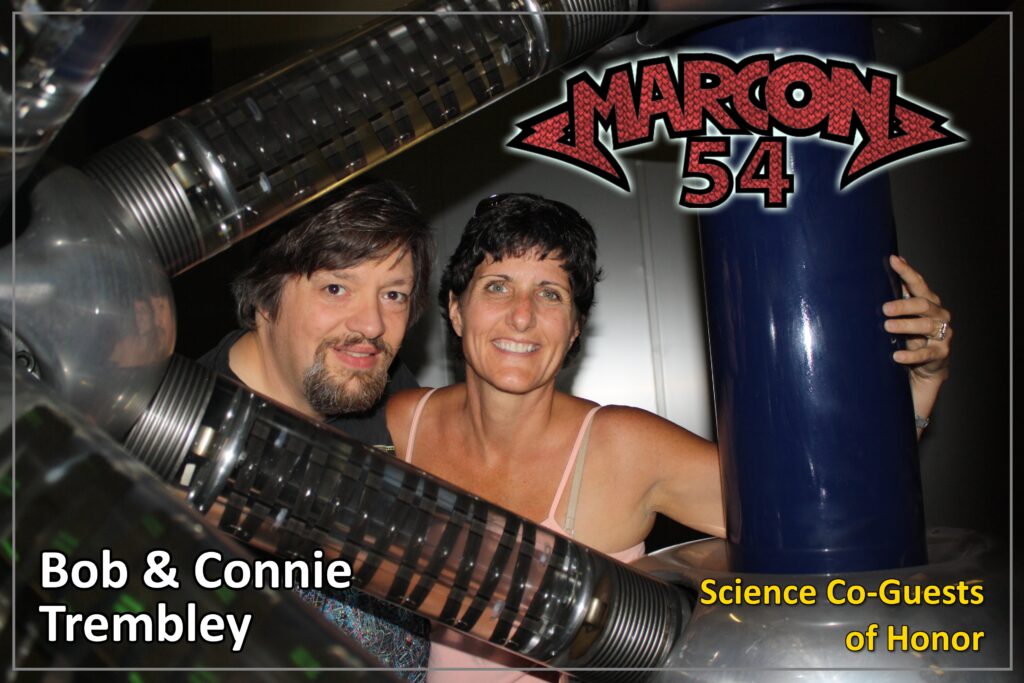 My wife and I are Science Co-Guests of Honor at MARCON 54, a science fiction convention this weekend in Worthington, Ohio! The excitement and anticipation is going to make me explode! We’ve been attending midwest SF conventions for decades – I met Br. Guy at one! I became a volunteer NASA/JPL Solar System Ambassador and started lecturing at SF cons in 2013; in 2014, I was asked to run the science programming track for DETCON1 – the North American Science Fiction Convention (NASFiC) in Detroit. where I helped arrange to have Br. Guy Skype-in from the Vatican Meteorite Lab for a very well attended panel.

Bob and Connie standing next to a large voltage multiplier stack at Fermilab. The clear tubes contain strings of high voltage diodes immersed in oil. The rounded metal things are corona shields that surround the connections between different components in the system and prevent the air from being ionized when it’s running. Ultimately the thing produces 750,000 volts DC and was used as the first stage in a string of large particle accelerators.

Br. Guy will be Skyping-in to MARCON for a lecture with me, and weather permitting I’ll be setting up my telescopes to see the Moon and Sun – I’m REALLY hoping for clear skies on Sunday when I’m scheduled to have my solar telescopes out, as there are a couple large sunspots right now! Saturday morning my wife and I will be part of a group from the convention who will be helping judge the Ohio State Science Fair – so that ought to be interesting! Saturday May 11th is also International Astronomy Day – so there’s a bit of serendipity there with me expounding about astronomy all weekend!

The waxing crescent Moon is very near the star Tianguan on May 7th, and near the star Alhena on May 8th. On May 9th, the Moon will appear between the stars Pollux and Procyon in the western sky after sunset.

Saturn, Jupiter and the star Antares continue to appear southern sky early in the morning – each morning they appear a little more to the southwest. 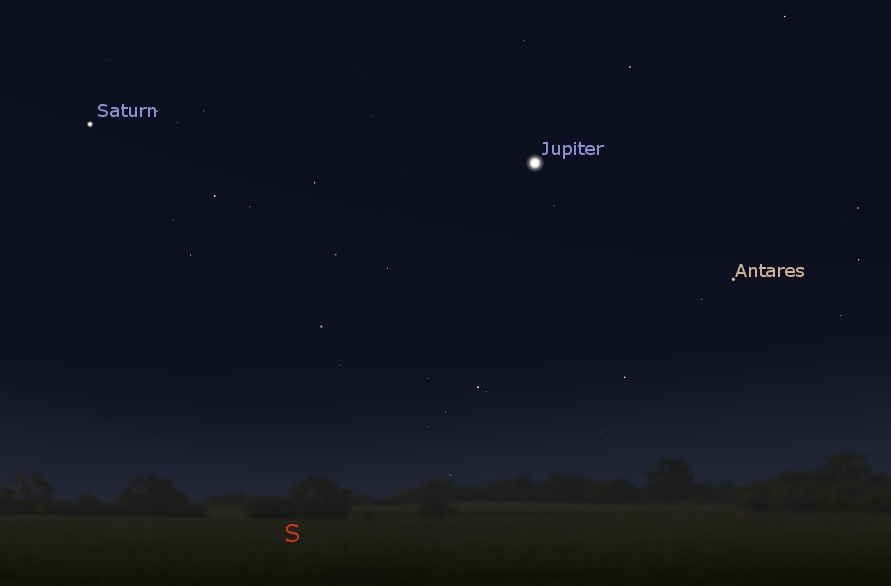 Saturn and Jupiter are high in the southern sky all week. Credit: Stellarium / Bob Trembley.

The star Arcturus and “the Big Dipper” appear in the west-northwestern predawn sky. 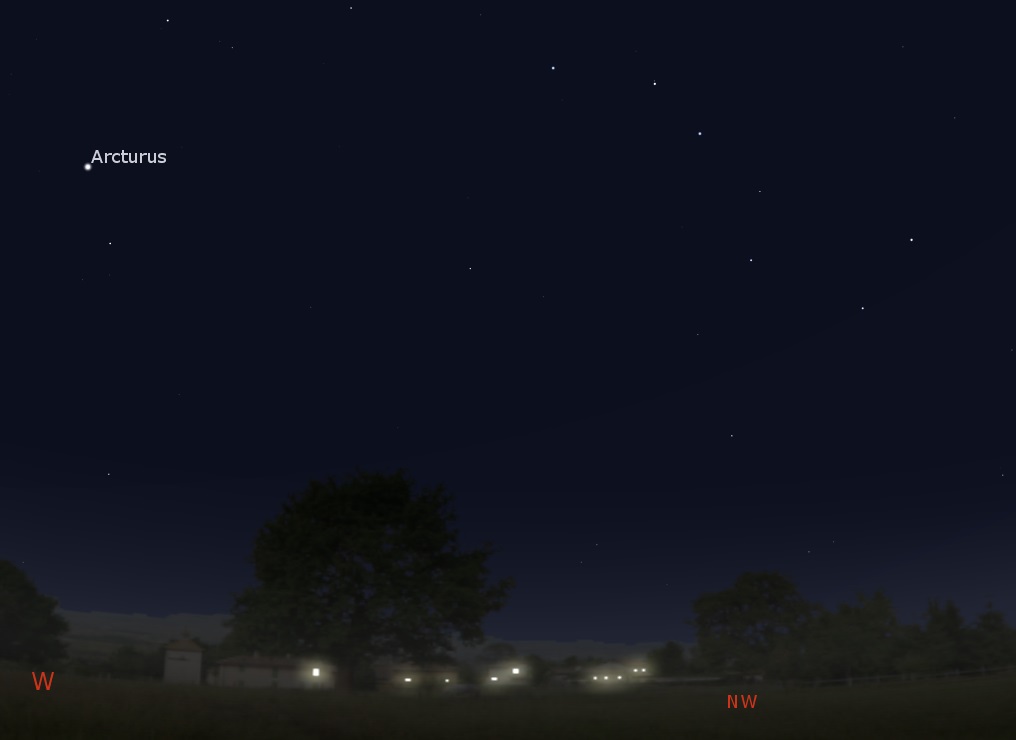 The star Arcturus and “the Big Dipper” in the west-northwestern predawn sky on May 8th. Credit: Stellarium / Bob Trembley.

This Saturday is International Astronomy Day – find a ‘scope, and spot some craters and mountains on the Moon!

The Moon is a waxing crescent,visible toward the southwest in early evening.

The first quarter Moon occurs on Sunday May 12th, the Moon will be visible high in the southern sky in early evening.

After May 12th, the Moon will be a waxing gibbous,visible to the southeast in early evening, up for most of the night.

Had a great meeting today with Jean-Yves Le Gall, President of the French Space Agency to discuss @NASA’s Moon 2024 plans. We’ve enjoyed successful partnerships in science and exploration that have taken our countries all the way to Mars on @NASAInSight. pic.twitter.com/lL1fX1ztfi

AR2740 and AR 2741 are making their way across the face of the Sun; AR2740 poses a threat for M-class solar flares – you can see them crackling in the video below. SpaceWeather.com says: “A faint CME that left the sun on May 7th could strike Earth’s magnetic field on May 10th or 11th, according to NOAA analysts. The plasma cloud was hurled into space by an explosion in the magnetic canopy of big sunspot AR2740. If the CME does strike, it will likely be a glancing blow sparking only minor geomagnetic storms.”

The eastern limb of the Sun continues to hog most of the prominences; you can see flare after flare coming out of AR2740.

This is amazing! AR 12740, which is an old cycle region and I honestly have not expected much, has produced a C9.9 (almost M-class) flare. The flare was very short duration, but note the spectacular large-scale coronal propagating front in the difference movie! pic.twitter.com/LVwMsVdrEq

This is what I see when the meteorologist says, "And here's what's happening in your neck of the woods…"

Are greenhouse gases released by human activities affecting precipitation and drought? Yes, and the answer is in the trees: https://t.co/PeL9qvbDSa pic.twitter.com/p8EK7YA9ge

A flyby by two rogue stars prevented an exoplanet from being kicked out of its home system, finds new research. https://t.co/hWpU2b5m5K pic.twitter.com/k49EYSxoRc 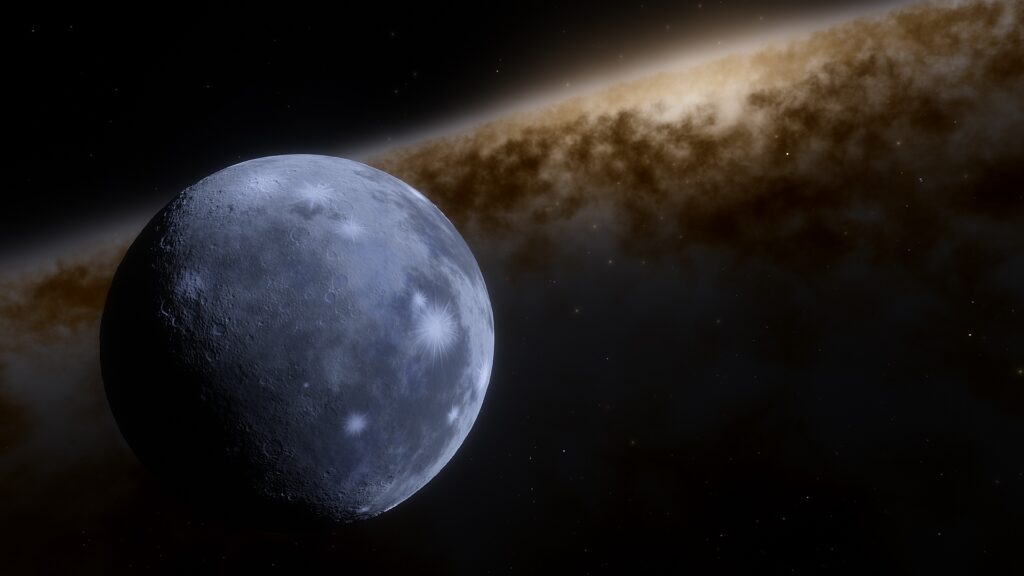 Nearly 8,000 light-years away from Earth, astronomers have discovered a black hole that keeps rapidly swinging out jets of plasma clouds into space, according to a new study https://t.co/t3AardLjMN pic.twitter.com/bst7Hw1Ght