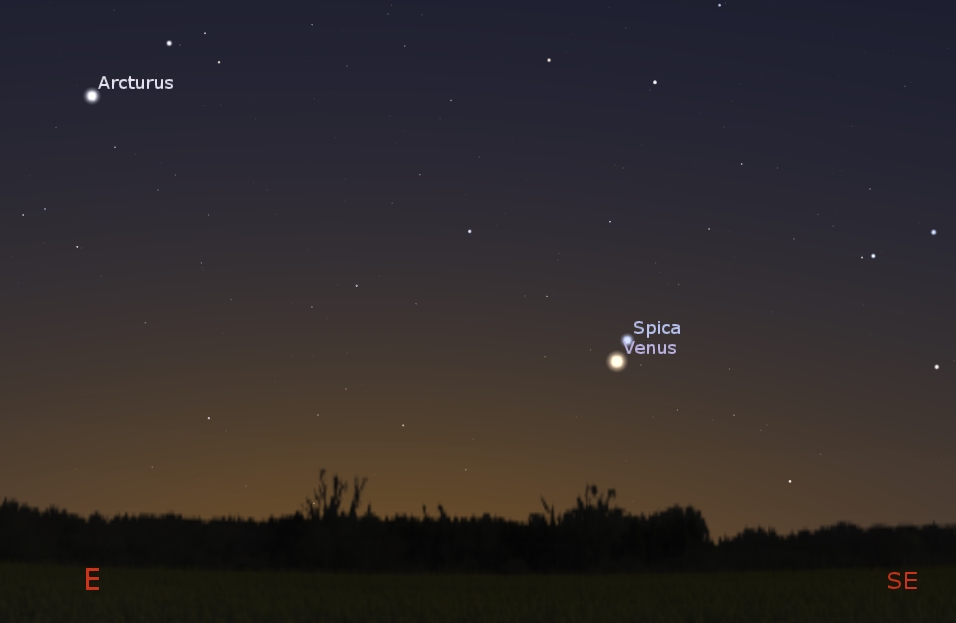 There will be twin “morning stars” in the eastern predawn sky for the next several days; Venus will appear very near the star Spica for the next week.

Conjunction of Venus and the star Spica in the predawn sky, Nov. 13, 2018. Credit: Stellarium / Bob Trembley. 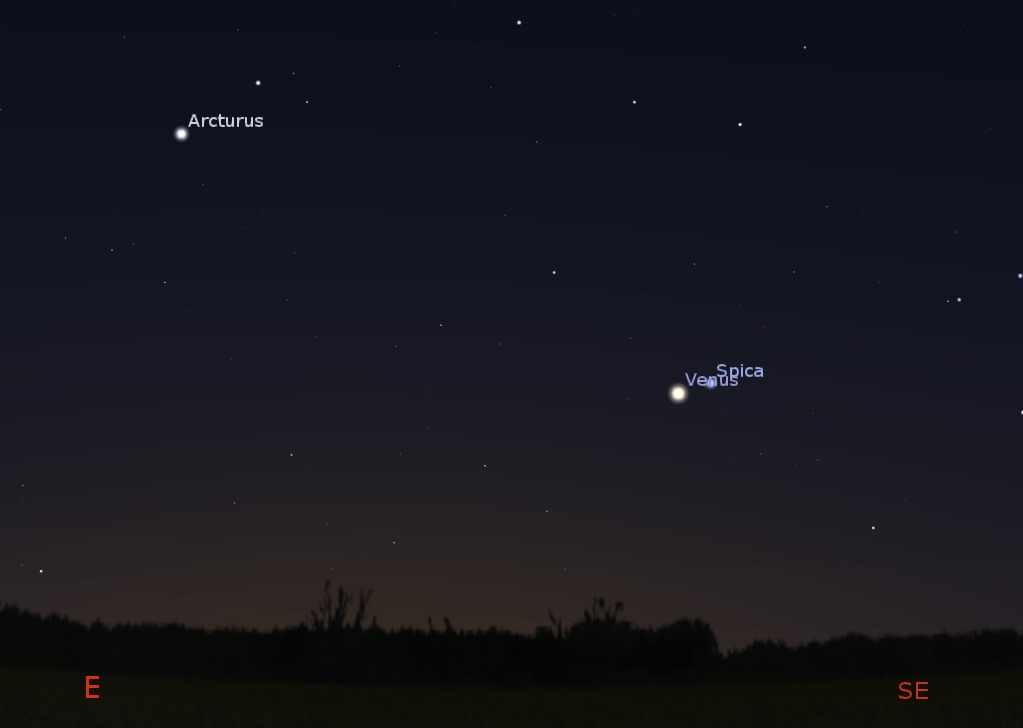 Conjunction of Venus and the star Spica in the predawn sky, Nov. 19, 2018. Credit: Stellarium / Bob Trembley.

A waxing crescent Moon joins Saturn in the southwestern sky on Nov. 13th. 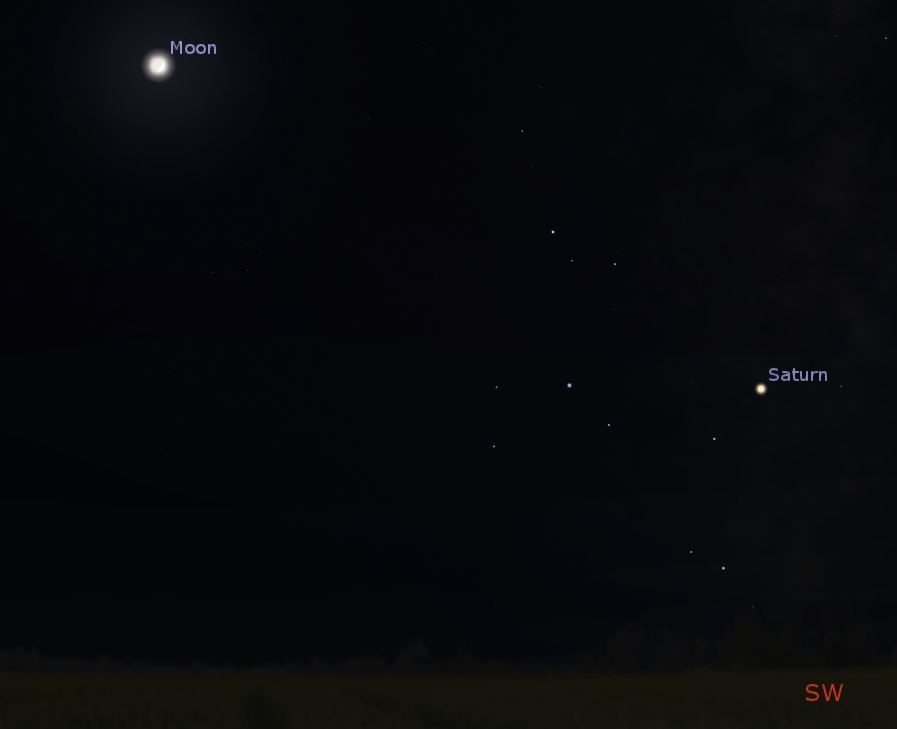 The Moon and Saturn in the southwestern sky shortly after sunset on Nov. 13, 2018. Credit: Stellarium / Bob Trembley.

In the south, Mars joins that same waxing crescent Moon on Nov. 13th. 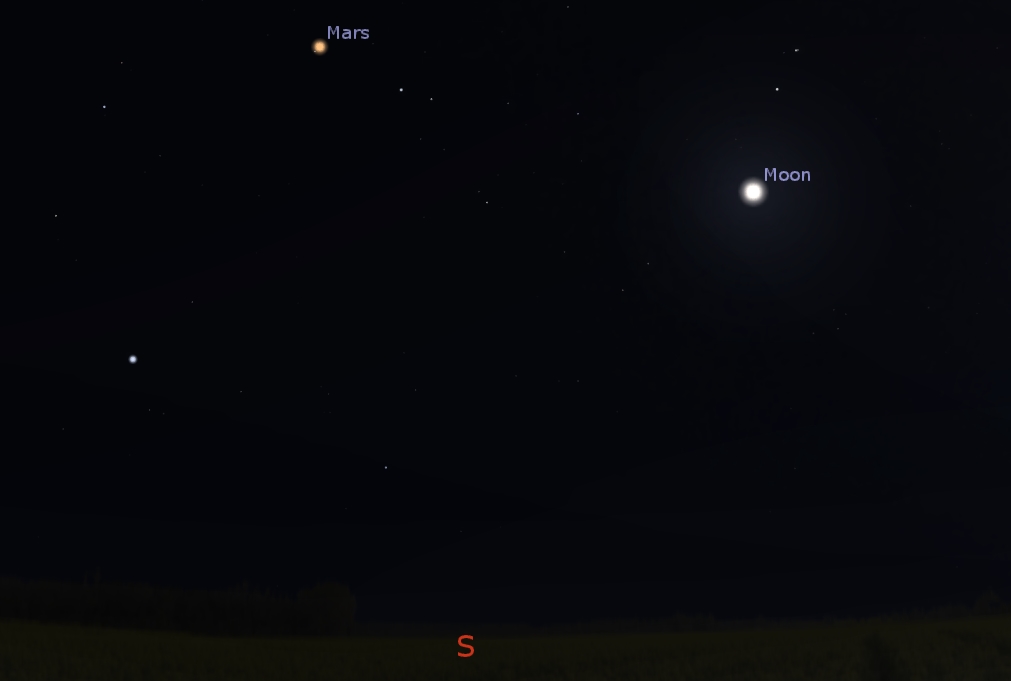 Mars and the Moon in the southern sky shortly after sunset on Nov. 13, 2018. Credit: Stellarium / Bob Trembley.

The Moon appears very close to Mars high in the southern sky on Nov. 15th after sunset. Apparently this is the week for conjunctions… 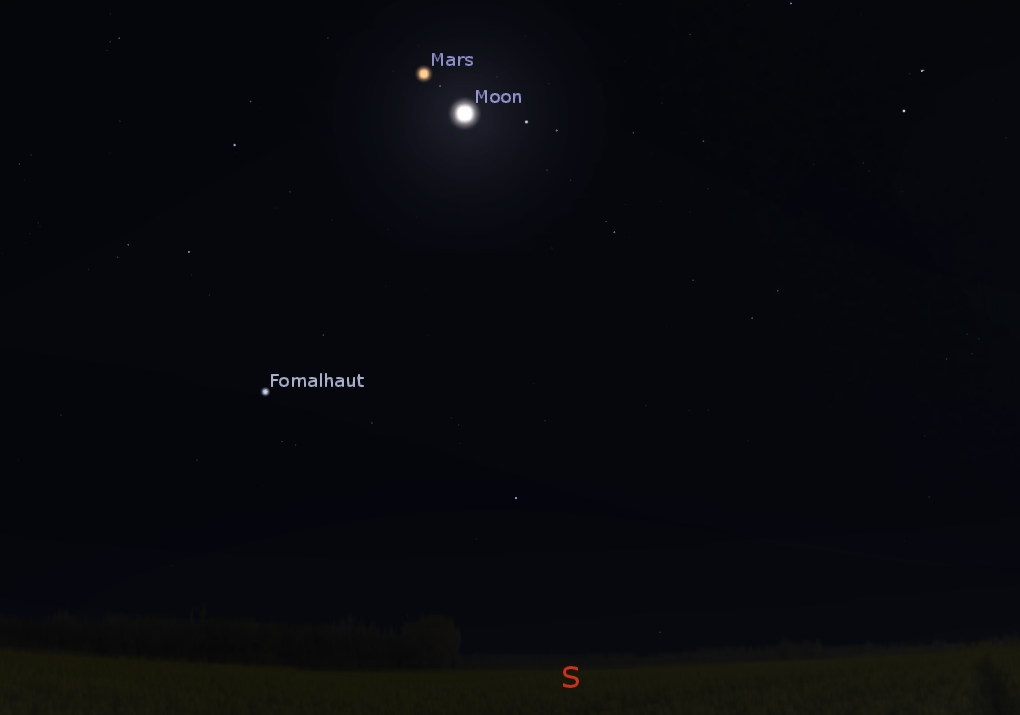 Conjunction of Mars and the Moon in the southern sky shortly after sunset on Nov. 15, 2018. Credit: Stellarium / Bob Trembley.

The North America Nebula is an emission nebula in the constellation Cygnus; the shape of the nebula resembles that of the continent of North America. The nebula covers an area more than four times the size of the Moon, but has low surface brightness, and cannot typically be seen with the unaided eye. 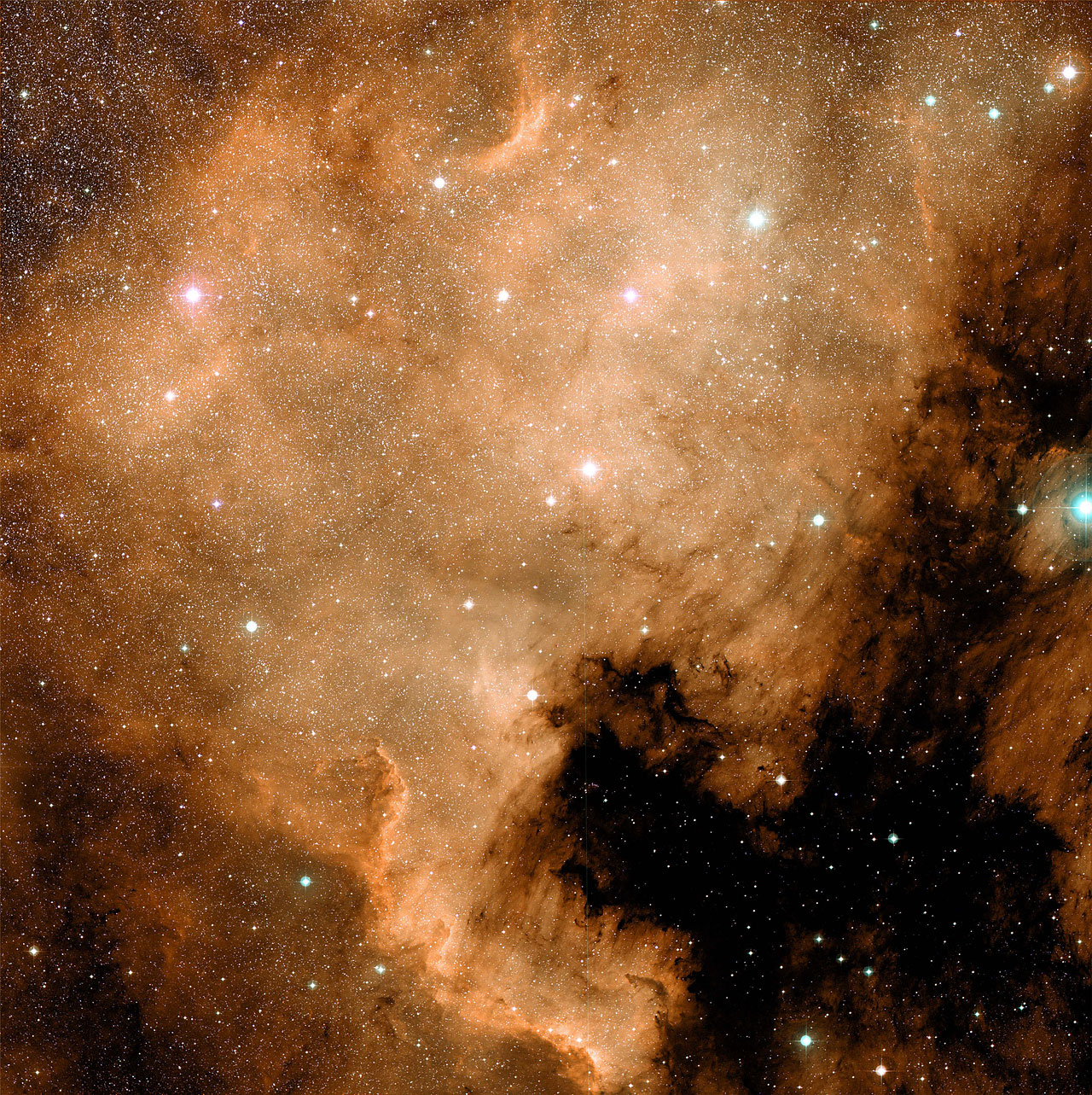 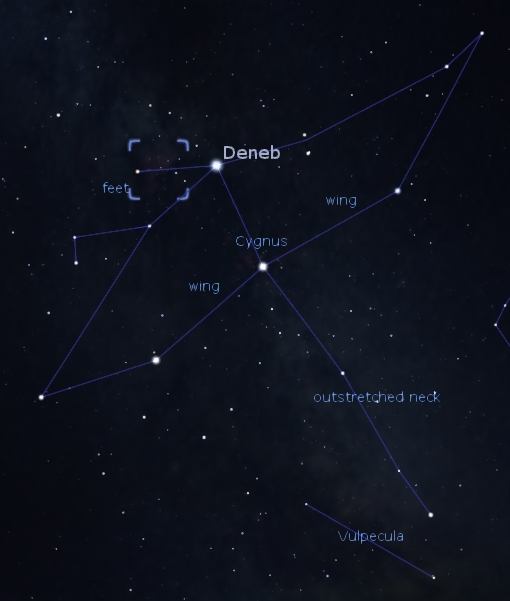 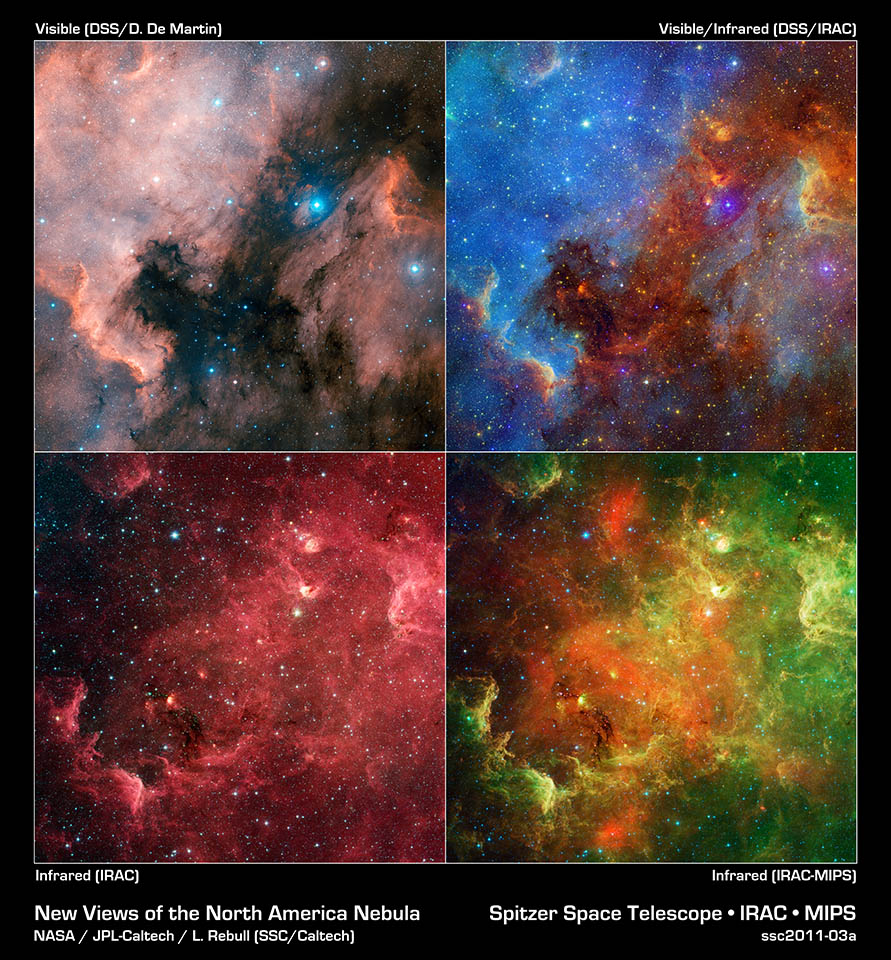 This image layout reveals how the appearance of the North America nebula can change dramatically using different combinations of visible and infrared observations from the Digitized Sky Survey and NASA’s Spitzer Space Telescope, respectively.
In this progression, the visible-light view (upper left) shows a striking similarity to the North American continent. The image highlights the eastern seaboard and Gulf of Mexico regions. The red region to the right is known as the “Pelican nebula,” after its resemblance in visible light to a pelican.
The view at upper right includes both visible and infrared observations. The hot gas comprising the North America continent and the Pelican now takes on a vivid blue hue, while red colors display the infrared light. Inky black dust features start to glow in the infrared view.
In the bottom two images, only infrared light from Spitzer is shown — data from the infrared array camera is on the left, and data from both the infrared array camera and the multiband imaging photometer, which sees longer wavelengths, is on the right. These pictures look different in part because infrared light can penetrate dust whereas visible light cannot. Dusty, dark clouds in the visible image become transparent in Spitzer’s view. In addition, Spitzer’s infrared detectors pick up the glow of dusty cocoons enveloping baby stars.
Color is used to display different parts of the spectrum in each of these images. In the visible-light view (upper right) from the Digitized Sky Survey, colors are shown in their natural blue and red hues. The combined visible/infrared image (upper left) shows visible light as blue, and infrared light as green and red. The infrared array camera (lower left) represents light with a wavelength of 3.6 microns as blue, 4.5 microns as green, 5.8 microns as orange, and 8.0 microns as red. In the final image, incorporating the multiband imaging photometer data, light with a wavelength of 3.6 microns has been color coded blue; 4.5-m

This week, look for the comet near the conjunction of Venus and Spica. 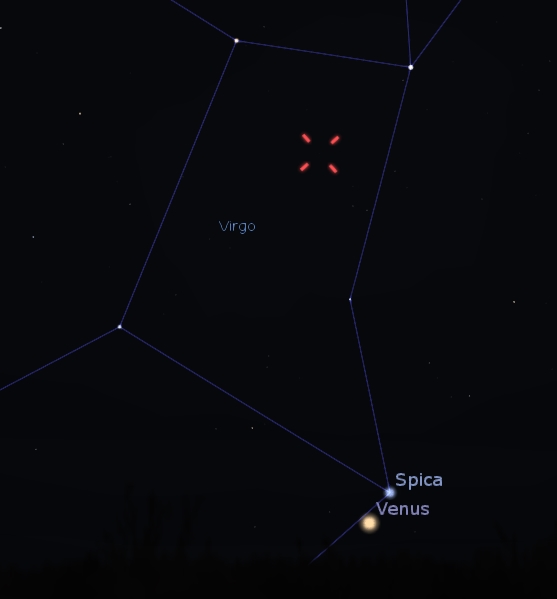 This week is excellent for lunar observations! The Moon is a waxing crescent in the southweatern sky at dusk, and is heading towards first quarter on Nov. 16th; after the 16th, the Moon will be a waxing gibbous visible in the southern skies after sunset.

The sun has a wee spot… so small, it can only be seen in hi-rez images. In the animation below, the location of the spot is visible as the bright region of coronal loop activity near the equator. The months-old northern coronal hole remains open, and a small southern hole has reopened. SpaceWeather.com says “Earth is exiting a stream of solar wind that ignited an explosion of almost-mythical auroras over the Arctic Circle on Nov. 10th and 11th. Another stream of solar wind is coming. Estimated time of arrival: Nov. 18th. Stay tuned.”

I really wish a couple of these nice huge prominences would have been visible last weekend, when I had my solar telescope set up a Windycon – a science fiction convention near Chicago…

In this diagram of the inner solar system, all of the fireball orbits from Nov 12, 2018 intersect at a single point–Earth. Source: Spaceweather.com 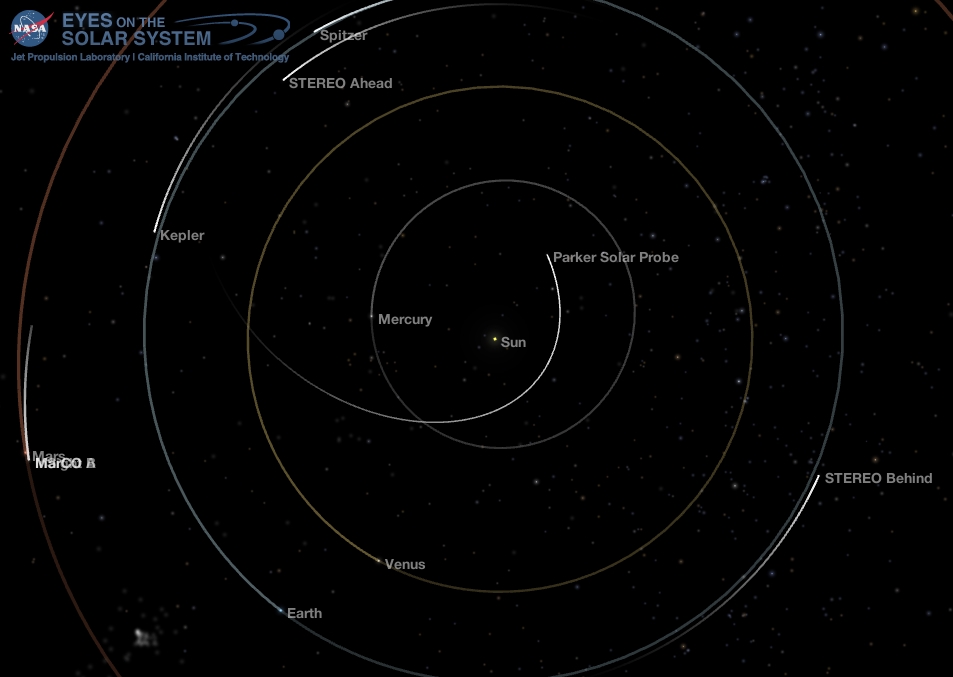 Position of the planets in the inner solar system, Nov. 13, 2018. Credit: NASA Eyes on the Solar System / Bob Trembley. 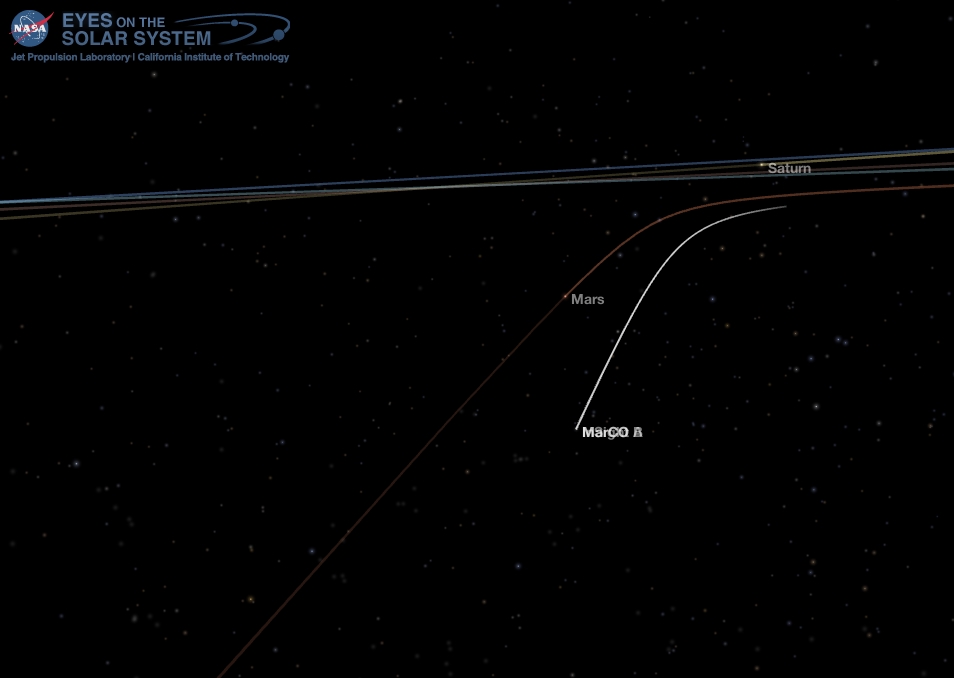 #ParkerSolarProbe has set a new record for spacecraft speed at 213,200 miles per hour, and it will go even faster throughout the mission. Going that fast — a consequence of getting close to the Sun — is actually a matter of slowing down at the right time: https://t.co/iot79IXSD9 pic.twitter.com/KWjEXnXz5b

The journey continues… I now have less than 60 million kilometers (37 million miles) to travel before I'm scheduled to arrive at Bennu on Dec. 3. #ToBennuAndBack

No matter how many times we may have done it before, landing on #Mars is hard! My mission is no different. Thousands of steps need to work perfectly together. More on landing: https://t.co/E46jVgdbKw pic.twitter.com/p08h8CBEij