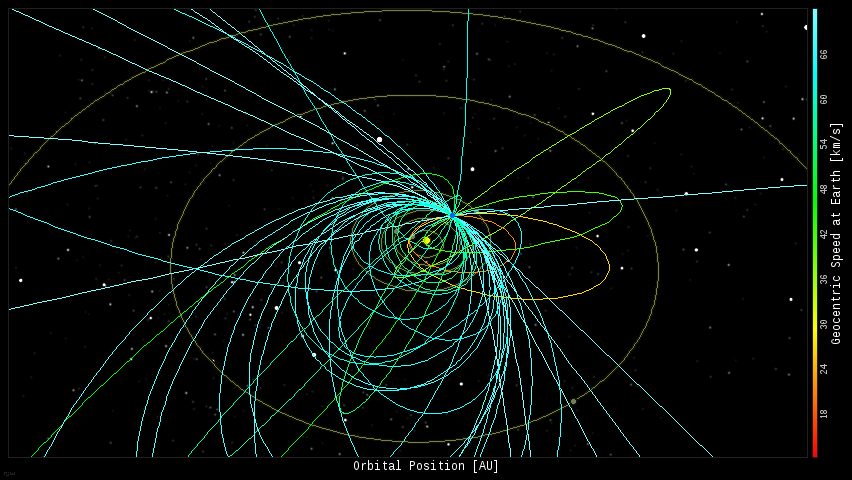 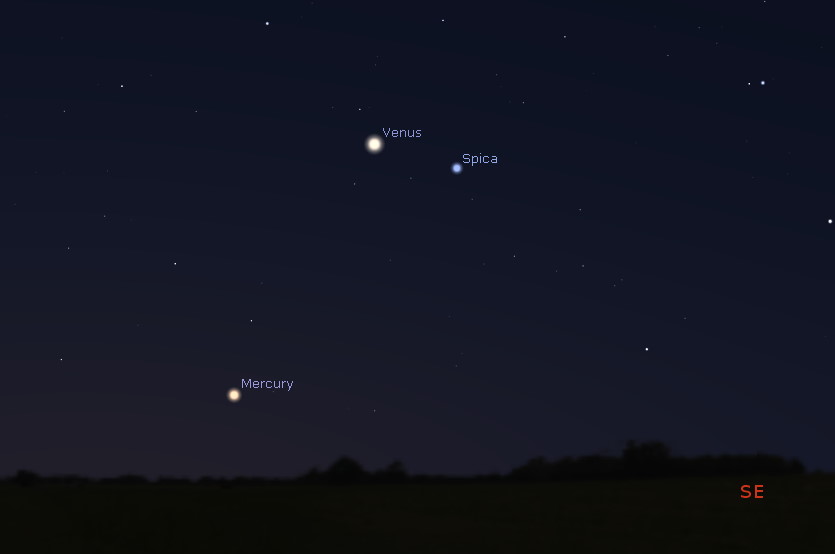 Mars and Uranus continue to appear high in the eastern sky after sunset. 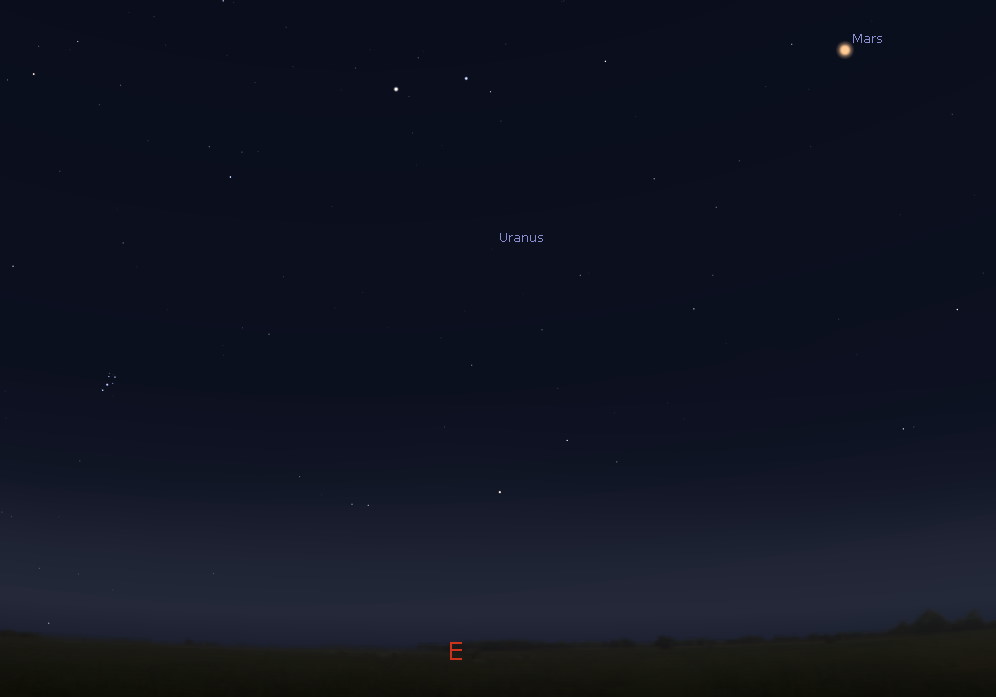 If you have a large enough ‘scope, you can see Uranus:

This is my shot before scaling it up to the closeup. Uranus is only 15 pixels wide. I took a lot of creative interpretations of the data to get the details you see in the final image, so I would consider it more an artistic rendering than a photo. pic.twitter.com/HbbjhxULFH

Jupiter and Saturn continue to appear in the south-southwestern sky at dusk, and setting in the southwest a few hours after sunset; from Nov 17-20, the waxing crescent Moon joins the pair of planets.

A waxing crescent Moon joins Saturn and Jupiter in the southwestern sky at dusk from Nov. 17-20. Credit: Bob Trembley / Stellarium.

My wife told me that she had her astronomy students look for the constellation Cassiopeia – here it is after sunset, and before sunrise.

The first quarter Moon occurs on Nov. 22nd. – it will be visible high in the southern sky in early evening.

After Nov. 22nd the Moon will be a waxing gibbous – visible to the southeast in early evening, and up for most of the night. 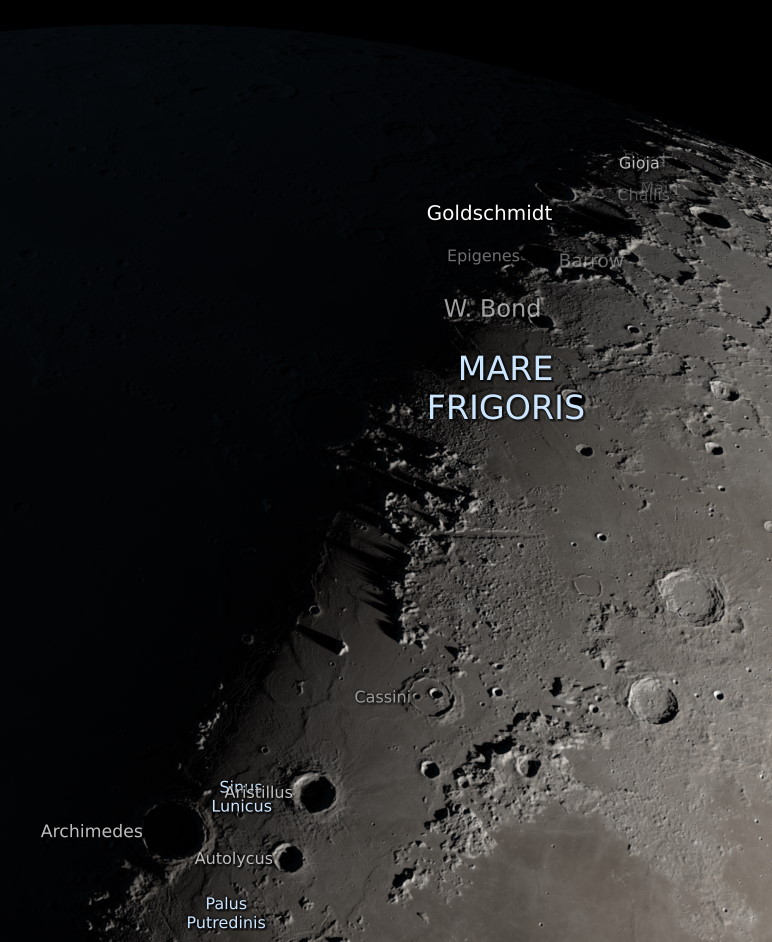 Annotated close-up of a section of the Moon on Nov. 23rd. – showing the play of shadows along the terminator. Visualizations by Ernie Wright / NASA’s Scientific Visualization Studio.

ANNOUNCEMENT: On the inaugural launch of @ulalaunch's Vulcan rocket, they are sending @astrobotic's Peregrin lander to the moon, and your name can be on it! My latest video explains how to get on the payload. (free) pic.twitter.com/42T1EsXqVP

The Sun has has new sunspot is emerging on it’s limb – you can see it in the lower left of the animation below. There are several regions of coronal activity in the Sun’s southern hemisphere; the northern coronal hole, apparently unsatisfied with being small for more then a week, has returned to being GINORMOUS! The southern coronal hole is small, and there are a couple small holes peppering the northern hemisphere.

Moderate prominence activity over the last couple days; one prominence in the lower left rises far above the Sun’s limb.

The SOLARACTIVITY PICTURE OF THE DAY for Tuesday, November 17th, 2020 goes out to Gabriel Corban for this great limb shot of NOAA AR 2781.

An absolutely amazing close up of the sun!

The peak of the Leonid meteor shower will dazzle the Philippine skies on the predawn hours of Nov 17 and 18. Here are the quick things you need to know about #Leonids! 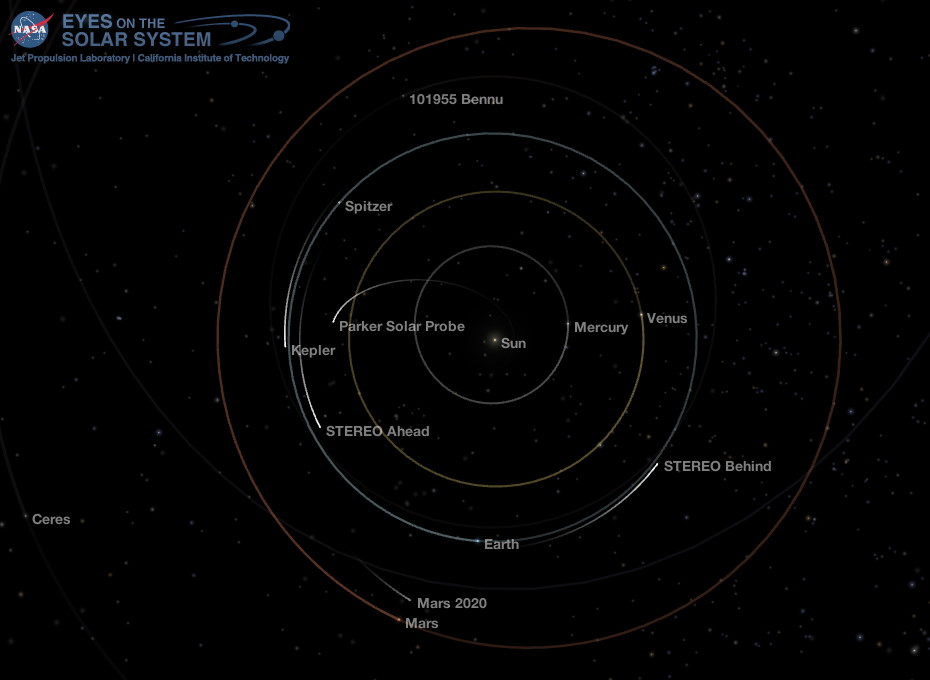 Position of the planets and a couple spacecraft in the inner solar system, 2020-11-17. Credit: Bob Trembley / NASA Eyes on the Solar System. 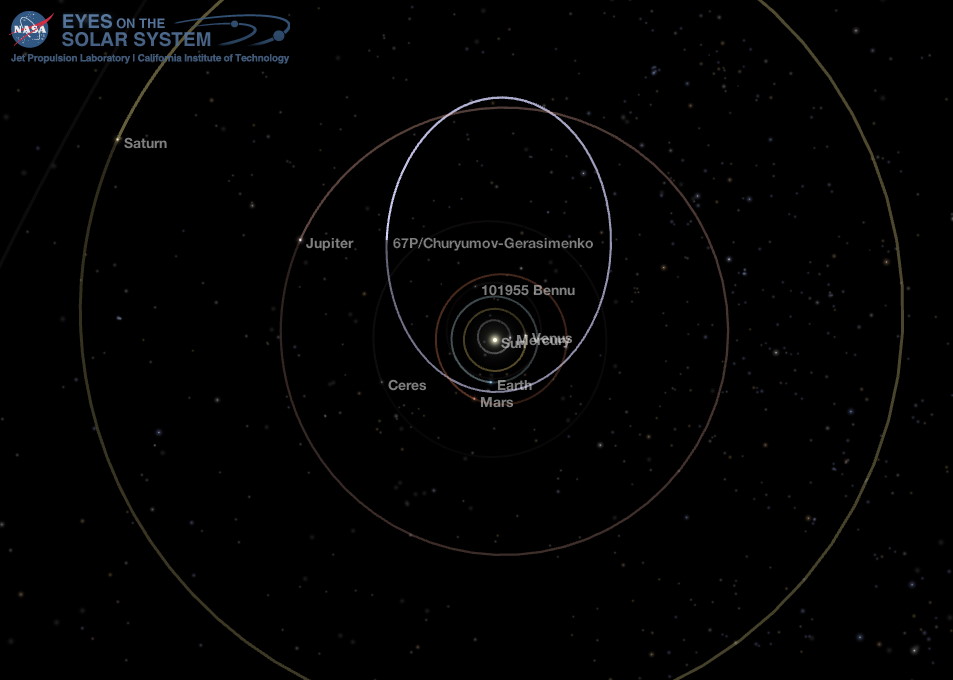 Position of the planets in the middle solar system, 2020-11-17. Credit: Bob Trembley / NASA Eyes on the Solar System. 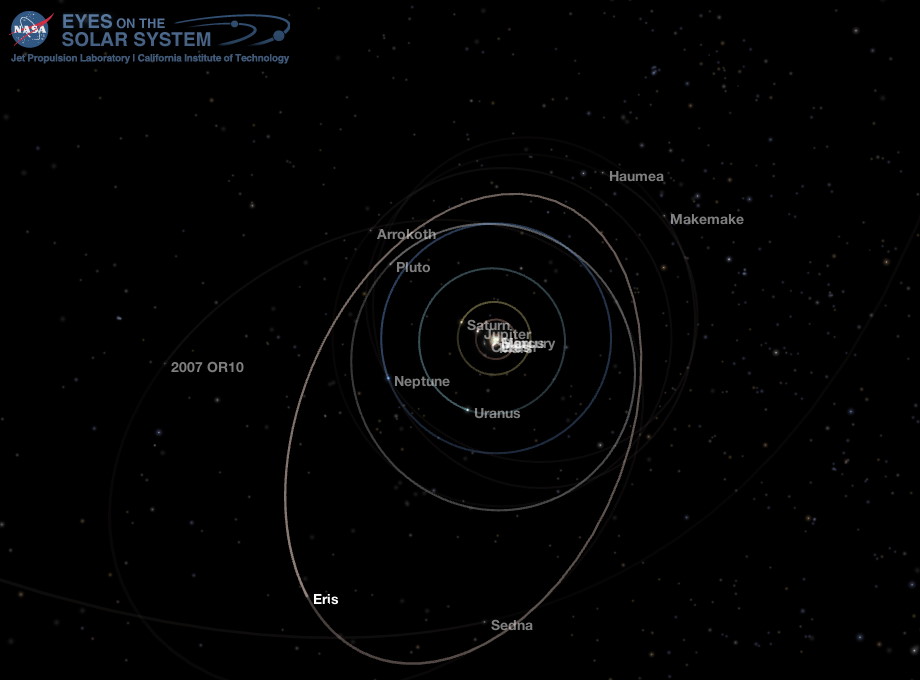 Position of the planets and some transneptunian objects in the outer solar system, 2020-11-17. Credit: Bob Trembley / NASA Eyes on the Solar System.

Boulders on Bennu are riddled with small craters — likely a result of micro-meteorites impacting the boulders over time. So, what led scientists to this epiphany?

Learn more about what one of our mission scientists saw in Bennu’s shadows: https://t.co/cVJiLqaLmG pic.twitter.com/CdHIXDiUTc

WELCOME ABOARD! SpaceX's newly launched capsule with four astronauts has arrived at the International Space Station, their new home until spring. https://t.co/BEI8OEmVsf pic.twitter.com/JAKs7rn2oK

Hi3D 16 Nov 20: A Recent Crater in the Southern Mid-Latitudes

Nothing beats a nice impact crater in 3D, especially a geologically recent one without a lot of shadows.https://t.co/BYKalpqeop

In this #HubbleFriday image, the galaxy LRG-3-817 appears as a long arc, left of the central galaxy cluster. It looks warped due to gravitational lensing, which happens when a huge distribution of matter sits between Earth and a distant source of light: https://t.co/gN2zBRVJuU pic.twitter.com/rb1hK1Z1xi

UPDATE: October 2020 was tied for the fourth warmest October globally since modern record-keeping began in 1880, measuring at 0.9 °C (1.6 °F) above the 1951-1980 baseline average. The seven most recent Octobers have also been the warmest.https://t.co/AKvhatrHCO pic.twitter.com/fVasWZPM4C

Before we reveal week 2 of the Color Your Universe coloring pages, let's see how your universe is looking. Here are just a few of our favorites. Post your colorful world(s) with #ColorWithNASA for a chance to be featured. https://t.co/HgHqkrT8V2 pic.twitter.com/mBkLcmnIwG

Question: How can we connect the pandemic & the night sky?

Answer: People are unable to travel to places to see the night sky. It's our responsibility to take this movement and bring it to all communities. We are fighting for access to the cosmos for everybody. #UnderOneSky2020

This stunning #HubbleClassic features galaxy M106 and its unusual set of spiral arms. It's a collaboration between Hubble and amateur astronomers, combining observations from Hubble and from astrophotographers on the ground: https://t.co/RvSbNcP9lH pic.twitter.com/fvas3QIn6H 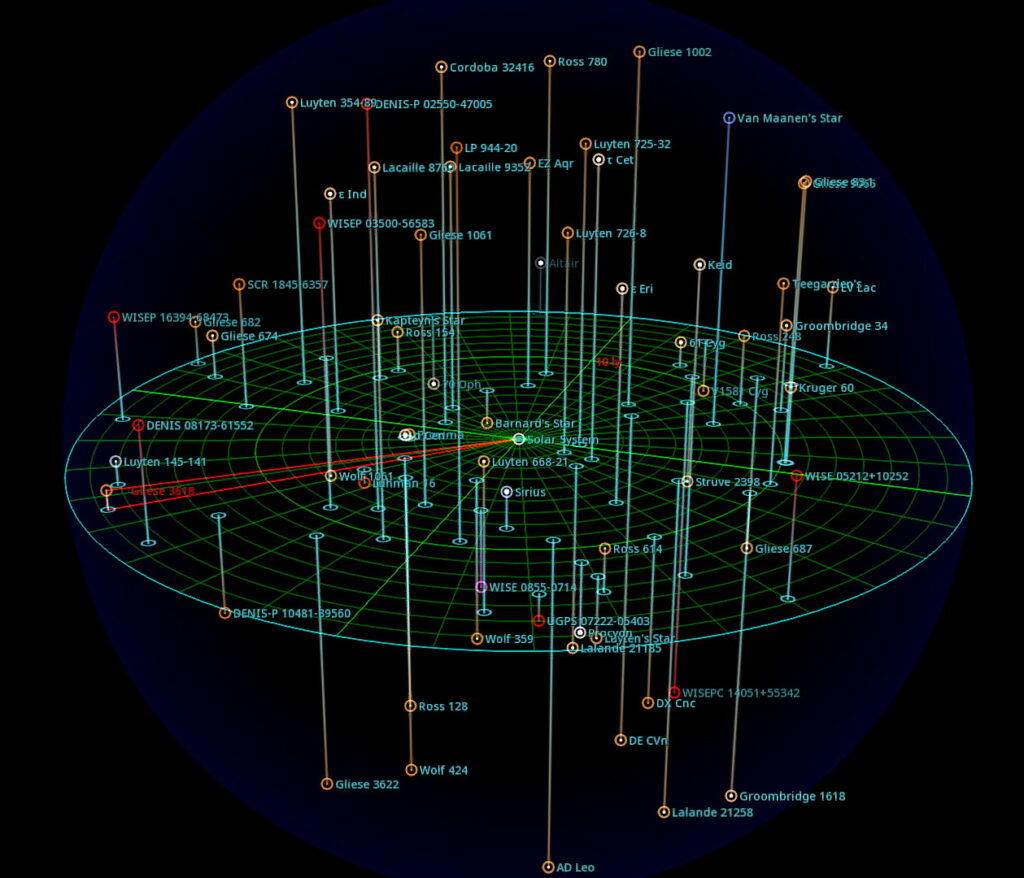 Gliese 3618 is about 15.8 light years from Sol; the plane (green) is aligned with the orientation of the plane of the Milky Way galaxy. Credit: SpaceEngine / Bob Trembley.

LHS 288 (Luyten 143-23) is a red dwarf around 15.8 light years from the Sun, the closest in the constellation Carina (near Eta Carinae). It is far too faint to be seen with the unaided eye, with an apparent magnitude of 13.92.

Recent studies suggest it may harbour a planet with a mass as small as 2.4 Jupiter, but the possibility that it passed over an undetected faint star could not be eliminated. – Wikipedia 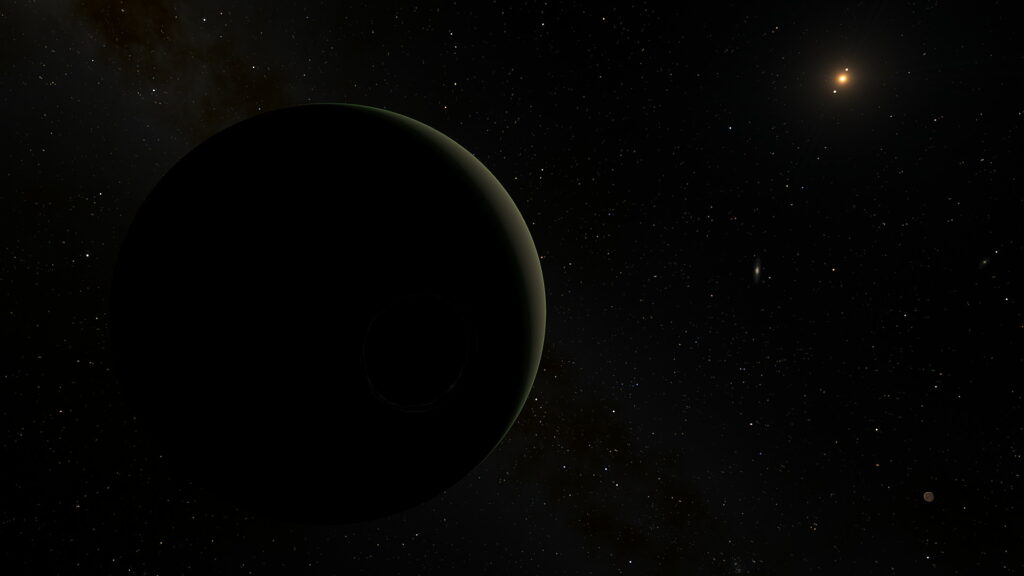 This system has a large exoplanet, massing more than Jupiter – it’s very likely that this exoplanet will have several moons; the Wikipedia article above indicates a single exoplanet in this system – SpaceEngine, however, has multiple exoplanets with their own moons. I wanted to see of the catalogs that SpaceEngine uses have been updated, and that led me down a path of discovery I was not expecting; I did a starch on “star catalogs” and I was amazed at how many there have been! I see a bit of research in my future. 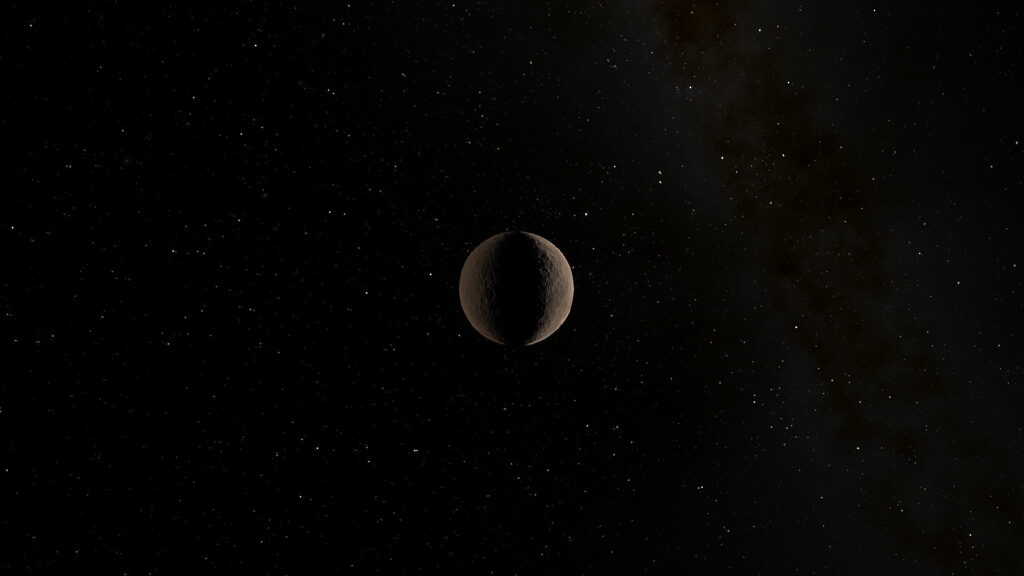 Artistic rendering of an exomoon orbiting the gas giant in the Gliese 3618 system – the moon is illuminated by the gas giant (left) and red dwarf star (right). Credit: Bob Trembley / SpaceEngine.