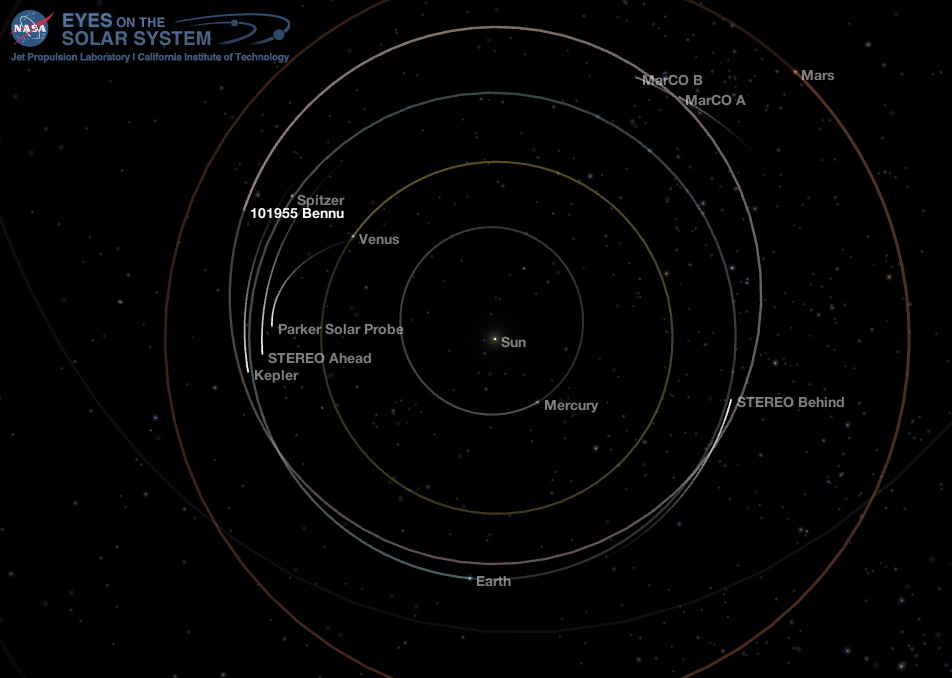 In last week’s session of my after-school club, the Endeavour Space Academy, I ran the students through a very quick tour of the solar system using both NASA’s Eyes on the Solar System app, and the NASA Solar System Exploration website. Only a couple of the students knew anything at all about the solar system, so I covered the most important points in the 25 minutes available… I wish I had several more hours to cover everything! I asked the students if any of them knew about the Earth’s mid-ocean rifts – one said they were covering that in science class. I asked the student if she heard about the ecosystems that exist around the mid-ocean rifts, and extremophiles? I talked about the students about the possibility that similar sub-ocean rift systems might exist on several of the icy moons in the outer solar system, and what that might mean for the search for life.

Saturn appears high above the southwestern horizon after sunset this week, Venus and Jupiter appear much lower towards the horizon. 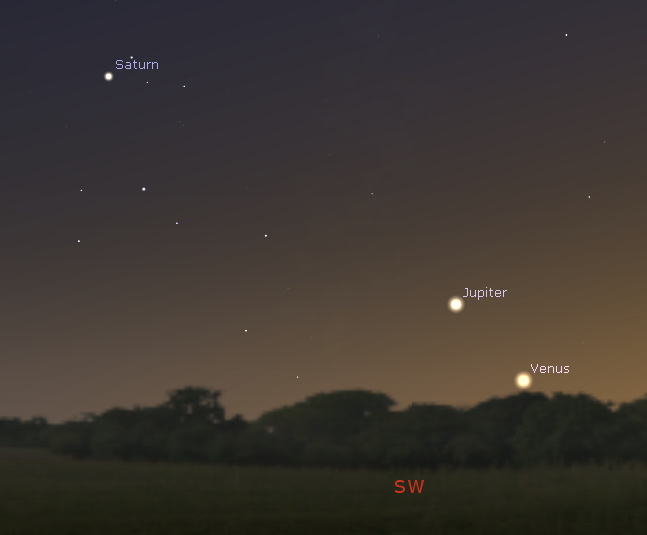 Venus is very low on the horizon, Jupiter a bit higher and Saturn high above the southwestern horizon after sunset this week. Credit: Stellarium / Bob Trembley

Mercury is low above the southeastern horizon, and Mars a bit higher and near-ish the star Spica before sunrise this week. 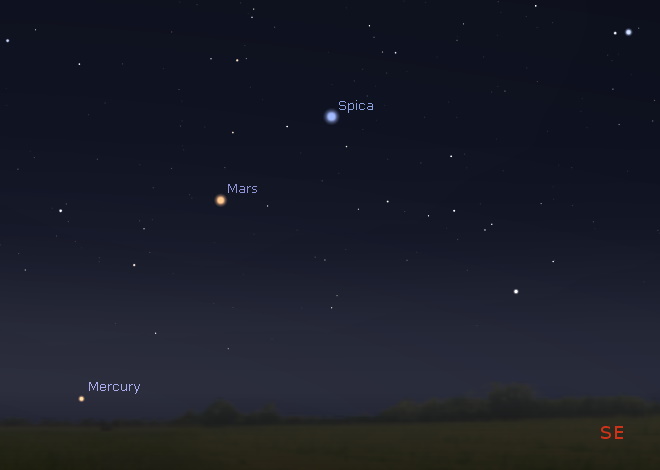 Mercury and Mars are low on the southeastern horizon before dawn this week. Credit: Stellarium / Bob Trembley

The Moon appears very near the star Regulus in a conjunction occurring in the eastern sky early in the morning of Nov. 20th. 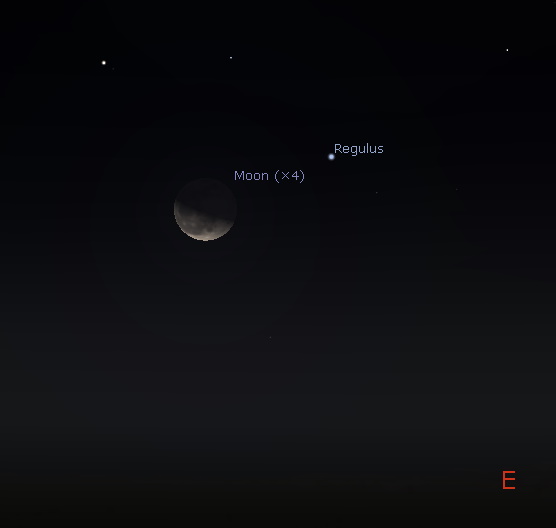 Conjunction of the Moon and the star Regulus in the eastern sky early in the morning of Nov. 20, 2019. Credit: Stellarium / Bob Trembley

The waning crescent Moon shares the eastern horizon with the star Arcturus before sunrise this weekend.

The constellation Gemini appears above the eastern horizon around 10:00 PM this week. 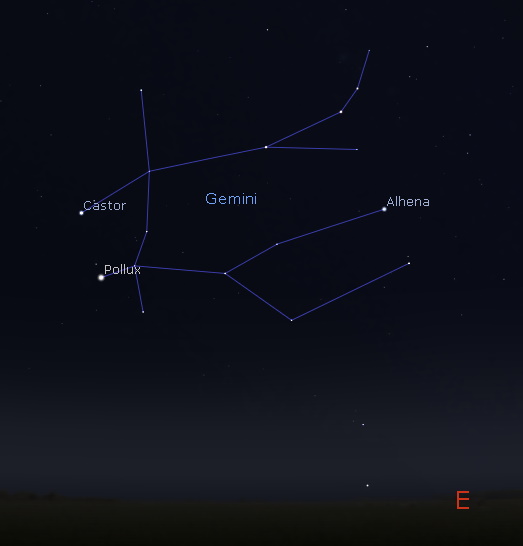 The constellation Gemini above the eastern horizon at 10:00 PM this week. Credit: Stellarium / Bob Trembley

IC 444 is a small, 32 square arcminute reflection nebula in the constellation Gemini. 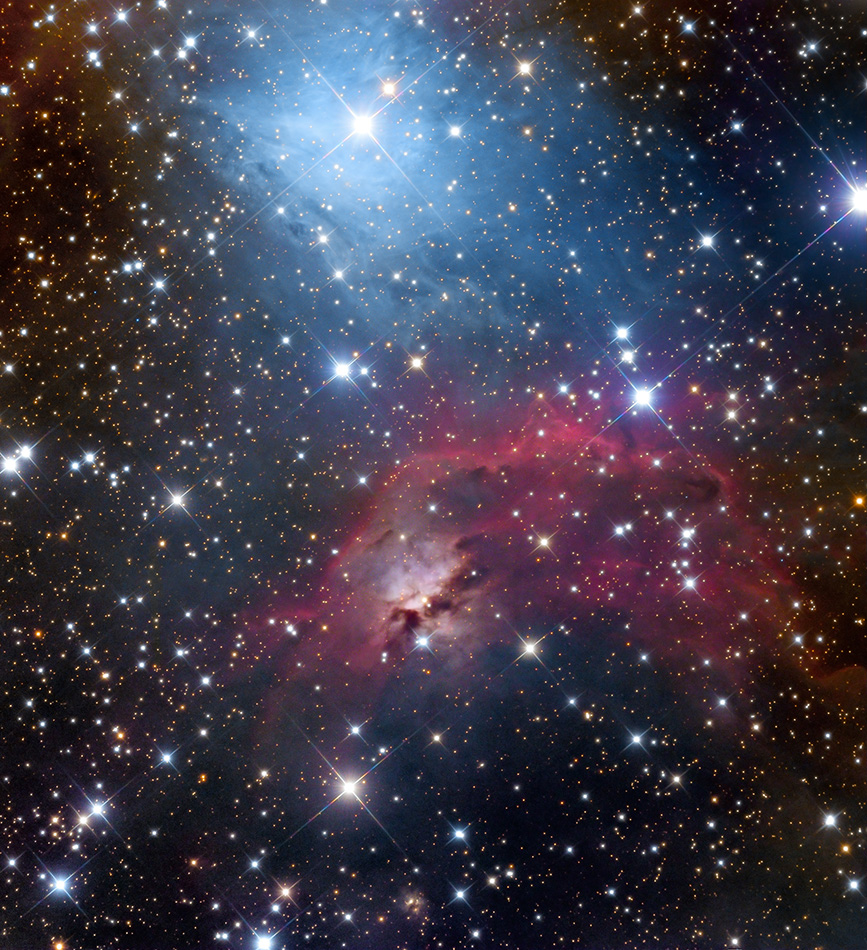 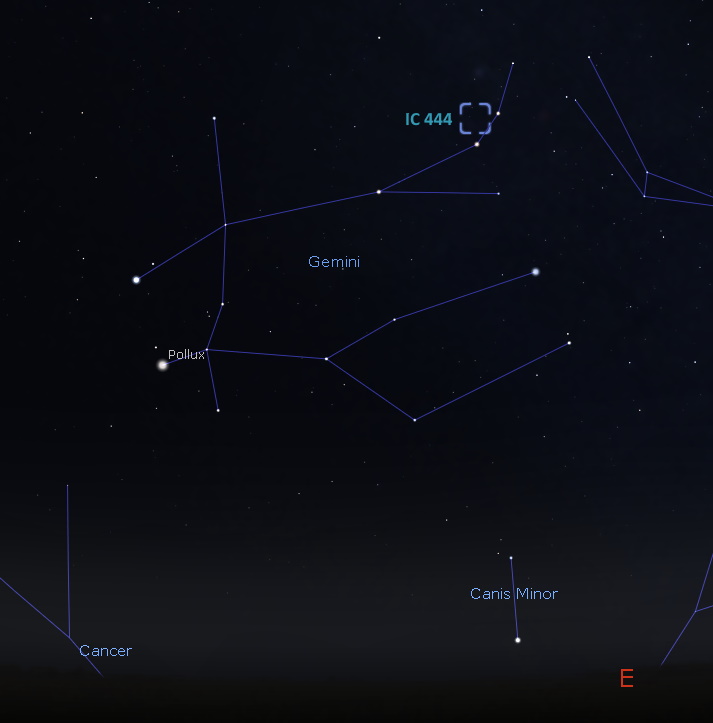 The Moon is at third quarter on Nov. 19th, rising around midnight, and visible to the south after sunrise.

After Nov. 19th, the Moon will be a waning crescent, visible low to the east before sunrise – keep an eye out for earthshine!

The Sun has been spotless for 6 days; the northern coronal hole remains large, and a rather large coronal hole appears along the equator. There is a prominent region of coronal loop activity south of the equator. 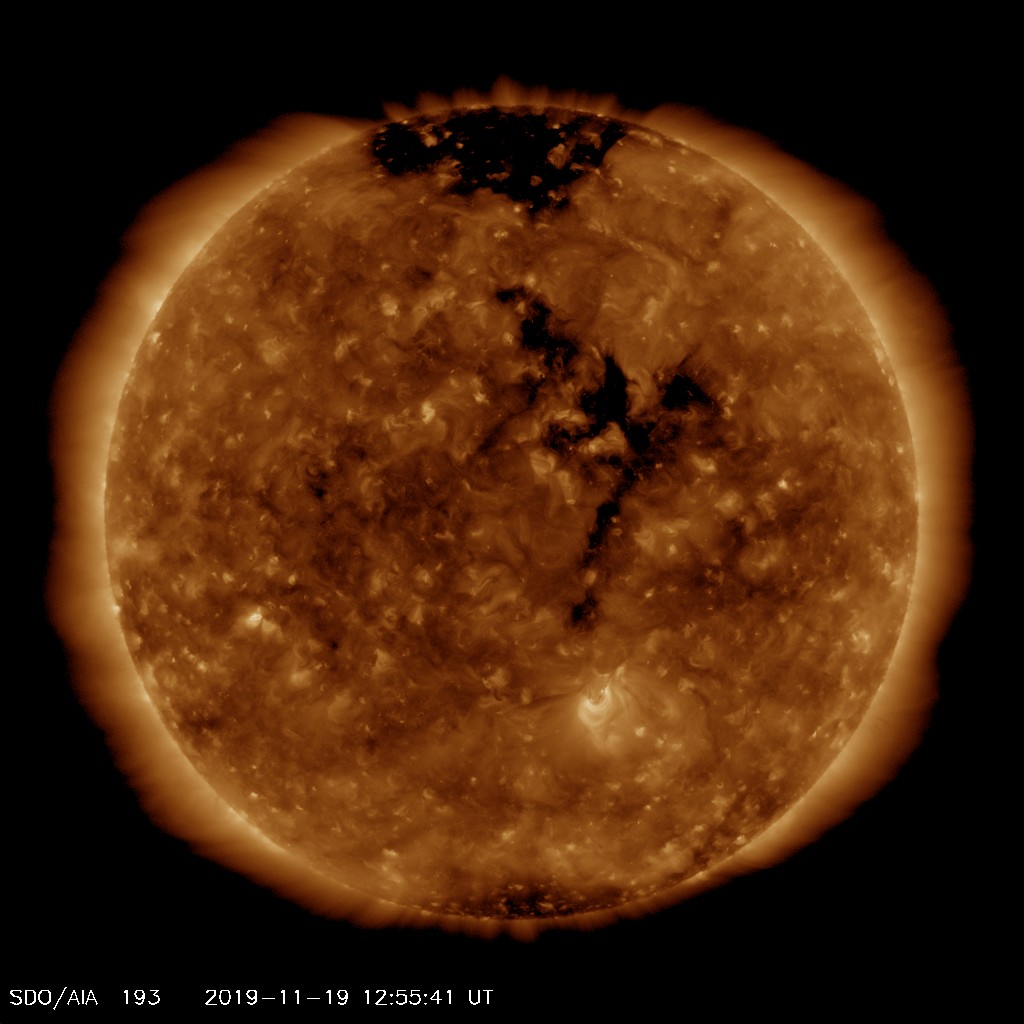 “WOW! Just WOW!” Those were the first words to come to mind when seeing all the prominences on the Sun today! 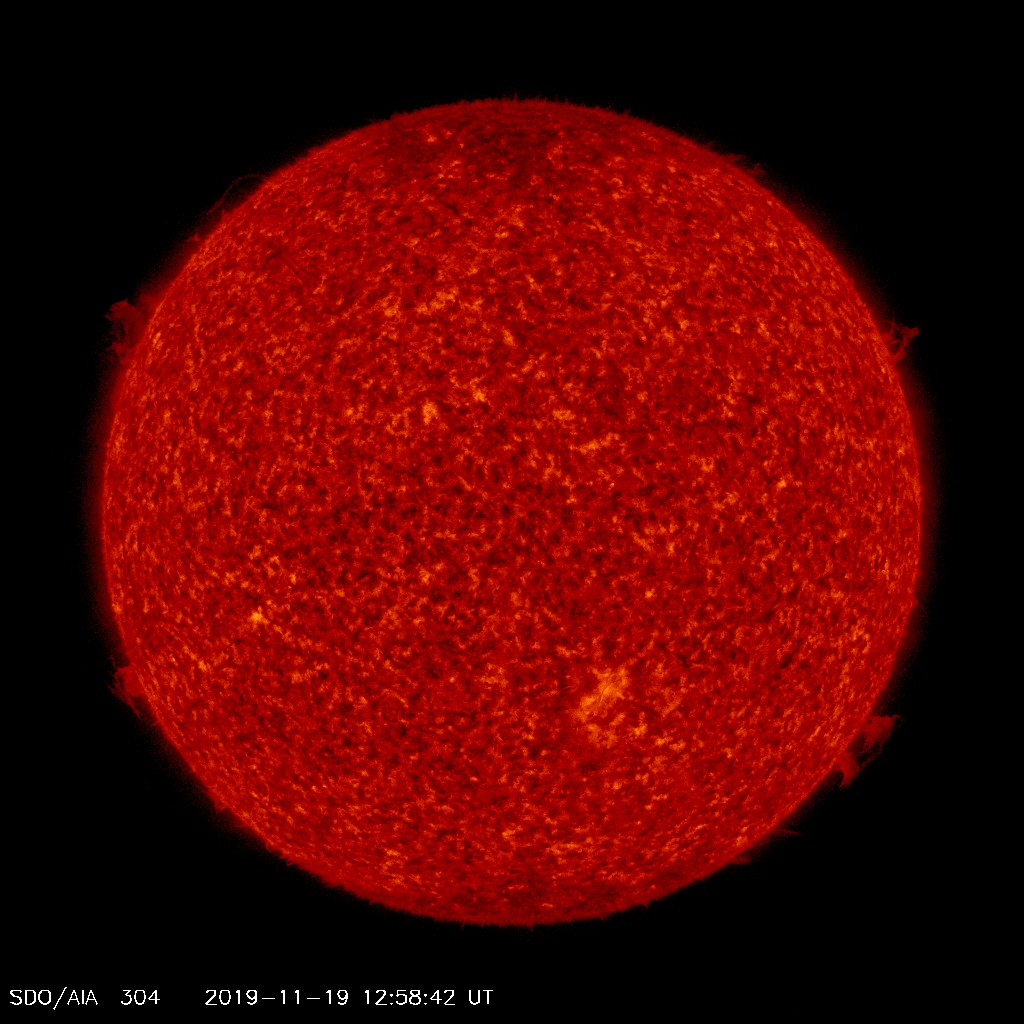 Ny-Ålesund falls directly below Earth’s magnetic cusp once a day, so particles have a direct path between our planet and space, funneled by Earth’s magnetic field — making this spot uniquely suited for studying how our planet’s oxygen is slowly leaking into space. pic.twitter.com/WBiBq3jw13

A fair number of the science fiction stories I’ve listened to recently have a basis in the exploitation of asteroid mineral and outer-system ice resources. Imagine the consequences, both societal and economic, of a single entity (corporation, human, free AI or whatever) having access to that much wealth and resources. The old tabletop role-playing game Traveller called them Megacorporations, as does the more recent “Grand Strategy” game Stellaris.

This asteroid could be the most valuable thing in our entire Solar System. It's valued at $700 quintillion — that's many billion times more valuable than all of the money in the world today pic.twitter.com/Fm25G6UA7x

A rock from space enters Earth's atmosphere at 50,000 mph lightning up the skies over Tasmania.

Astronomers have managed to find images of interstellar comet #2IBorisov up to almost a year before it was discovered, stretching back to December 2018 when it was beyond the orbit of Jupiter. Pretty neat!https://t.co/akMJNGSrqS pic.twitter.com/BPk14DxLCU

Position of the planets and some spacecraft in the inner solar system, Nov. 19, 2019. Credit: NASA Eyes on the Solar System / Bob Trembley.

Position of the planets and a couple bodies in the middle solar system – the orbit of comet 103P/Hartley 2 is highlighted: 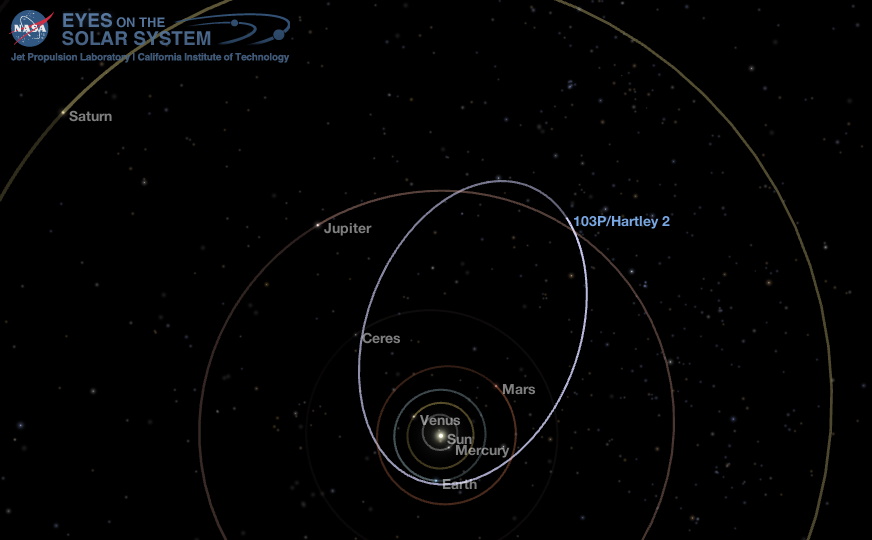 Position of the planets in the middle solar system, Nov. 19, 2019- the orbit of comet Hartley 2 is highlighted. Credit: NASA Eyes on the Solar System / Bob Trembley.

Comet 103P/Hartley (Hartley 2) is a small, oval (or peanut) shaped comet — its nucleus measures approximately one mile (1.6 kilometers) in diameter. It takes Hartley 2 about 6.47 years to orbit the Sun once. Hartley 2 last reached perihelion (closest approach to the Sun) in 2017.

Hartley 2 orbits the Sun within the asteroid belt, which lies between the orbits of Mars and Jupiter. Hartley 2 is a Jupiter-family comet. A Jupiter-family comet is defined as having an orbital period of less than 20 years and one that has been modified by close passages with the gas giant.

One spacecraft has encountered this comet: Deep Impact (EPOXI) in 2010. During its flyby, the spacecraft came within 431 miles (694 kilometers) of the comet. Hartley 2 was the fifth comet to be visited by spacecraft and was the second encounter made by this particular spacecraft. Deep Impact had previously visited comet 9P/Tempel 1 in 2005. – NASA 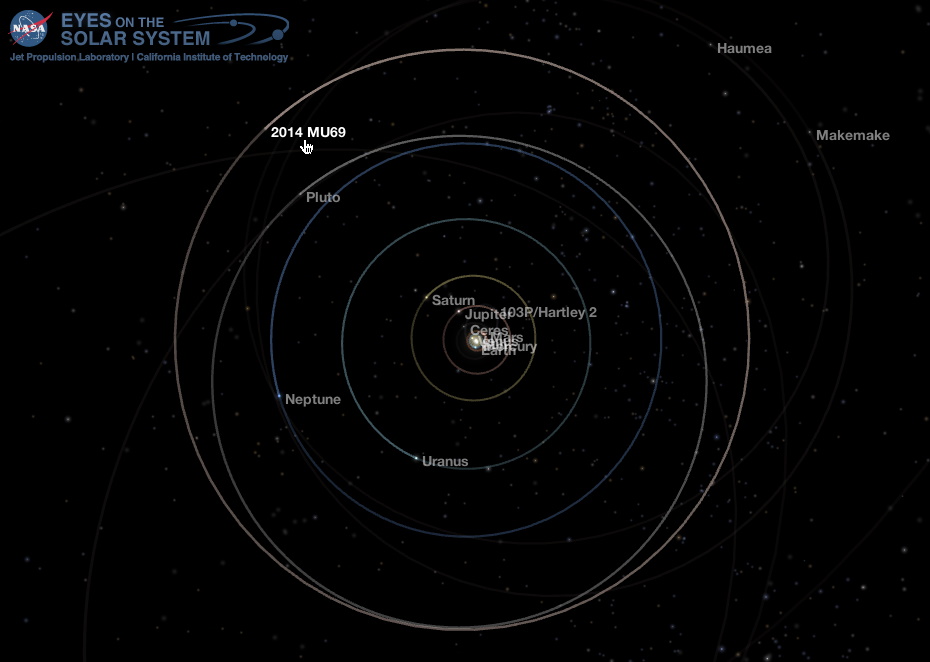 This is so very cool: Astronomers have confirmed that Europa blasts out geysers of water, sourced from the ocean deep beneath its surface!https://t.co/f98tneRLLU

A Kuiper Belt object spotted by @NASAHubble & visited by @NASANewHorizons was officially named this week. With consent from Powhatan Tribal elders and representatives, it is now known as "Arrokoth," meaning “sky” in the Powhatan/Algonquian language. Watch: https://t.co/MfxVuac4kf pic.twitter.com/jqGSC2KLHB

? A dynamic world of dunes, plains, craters & terrains is revealed in this first-ever geologic map of Saturn's moon, Titan. Lakes and seas are marked blue, but they aren't water! What rains down is methane and ethane in Titan's frigid climate. Zoom in: https://t.co/ufdpxYNEqP pic.twitter.com/lNoA7lkhjo

Here’s a 3D printed Digital Terrain Model (DTM) of site Sandpiper. The crater’s steep slopes stand out, along with the ruggedness of Bennu’s southern hemisphere where Sandpiper is located. pic.twitter.com/r45uZbaReK

We have been introducing messages from the Hayabusa2 Project staff, and the “Goodbye Ryugu” campaign will end today (11/19).

Everyone, please send us a message!https://t.co/13jELgeTrx

Attention media:
On 11/20 we will hold a telecon to discuss research launching to @Space_Station including:

The monthly GISTEMP surface temperature analysis update has been posted. The global mean temperature anomaly for October 2019 was 1.04°C above the 1951-1980 October average. https://t.co/EDTZWL4pYk pic.twitter.com/8d83bhLBMa

I looked at the “list of nearest terrestrial exoplanet candidates,” and saw Ross 128 b; I’ve never been there in SpaceEngine, so I went there: 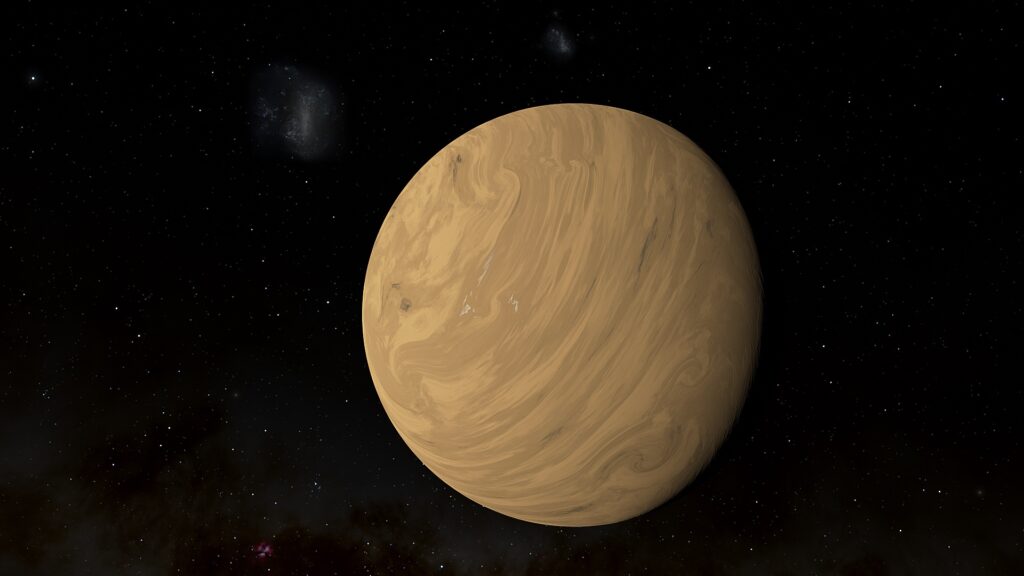 Ross 128 b is a confirmed Earth-sized exoplanet, likely rocky, orbiting within the inner habitable zone of the red dwarf Ross 128, at a distance of about 11 light-years