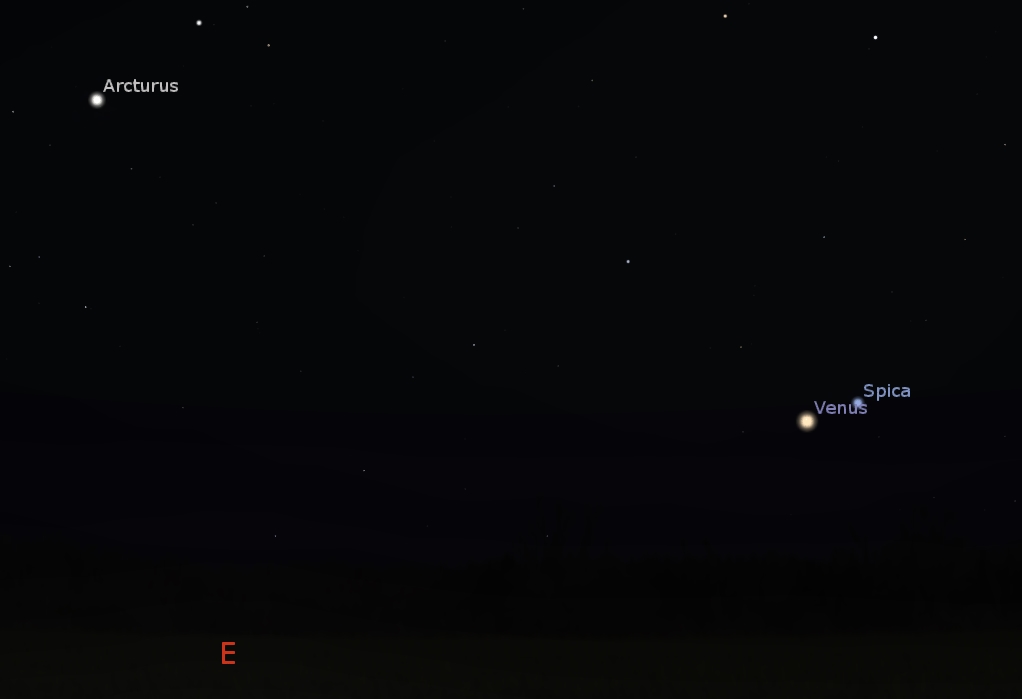 Venus and Spica continue their weeks-long conjunction in the eastern predawn sky.

Conjunction of Venus and the star Spica in the predawn sky, Nov. 20, 2018. Credit: Stellarium / Bob Trembley.

Orion and Canus Major are in the southwestern predawn sky all week. A few months ago, I remember writing about Orion just becoming visible in the eastern predawn sky; watching constellations creep across the southern sky over the course of a season is pretty interesting. I’m certainly learning a lot about the sky from writing these posts… 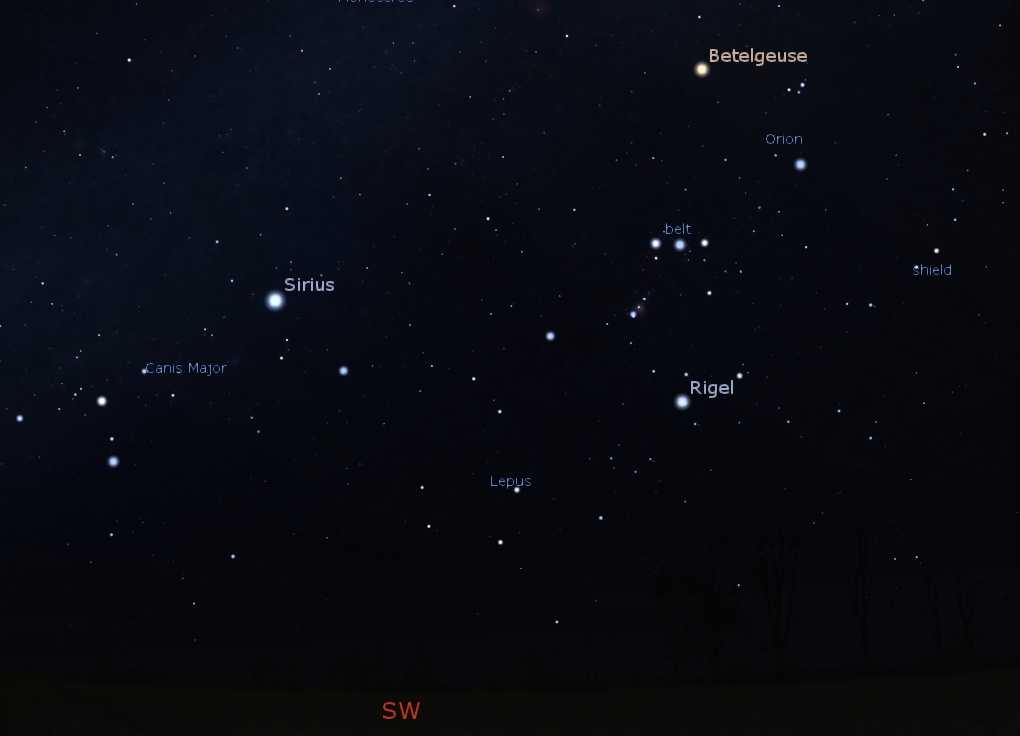 Saturn becomes the “evening star” in the southwestern sky at dusk; if you’re lucky, and have a clear horizon, you might catch a glimpse of Mercury very low in the sky around 5:30 PM ET on Nov. 20th. 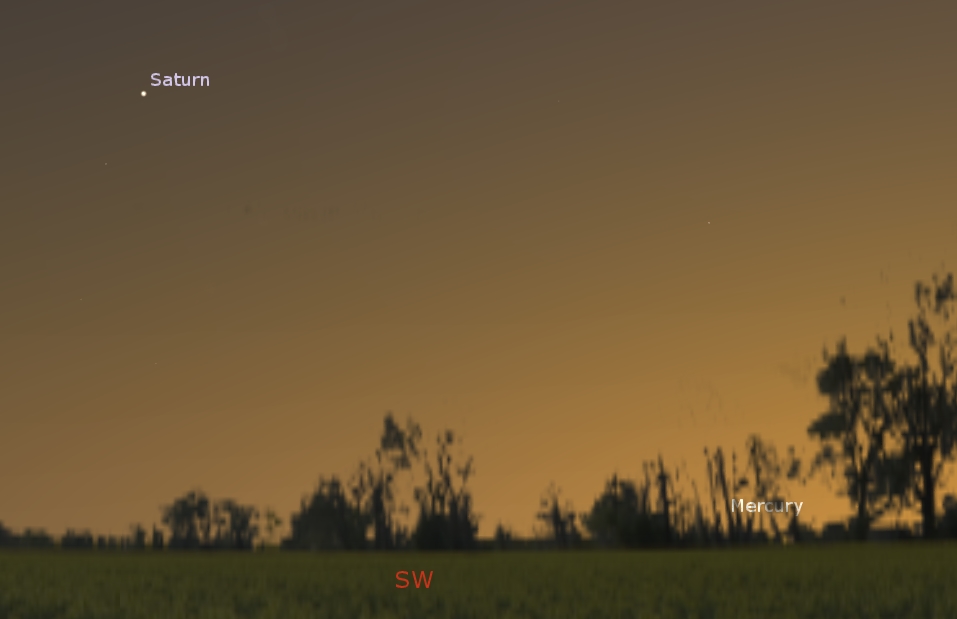 Saturn is now the “evening star” in the southwest, and Mercury is low near the horizon at dusk on Nov. 20, 2018. Credit: Stellarium / Bob Trembley.

Mars and Neptune will be high in southern sky after sunset all week. 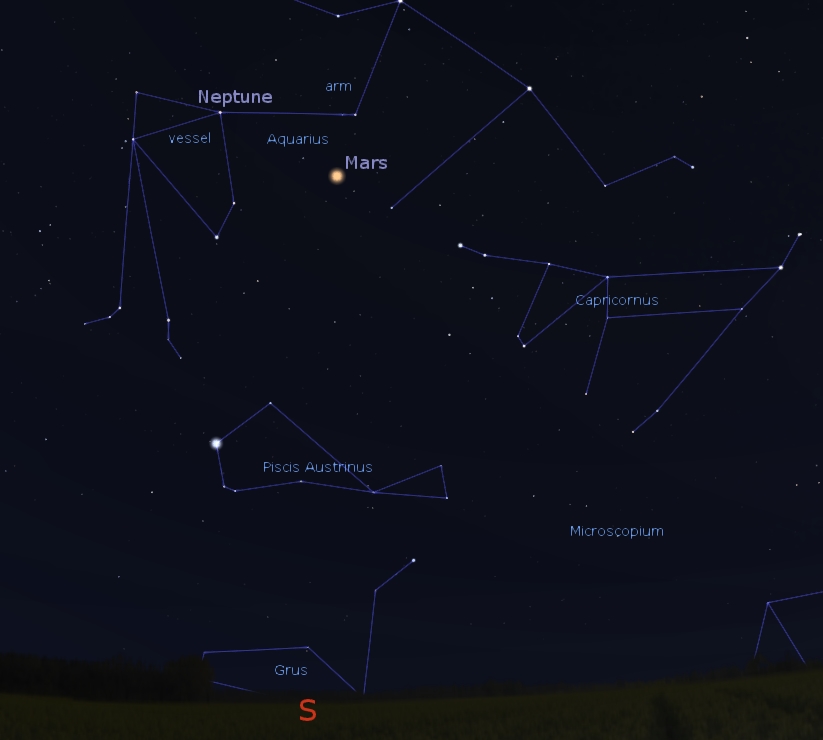 Mars and Neptune are high in the southern sky after sunset on Nov. 20, 2018. Credit: Stellarium / Bob Trembley.

Here’s a close-up of where Neptune is near the red giant star Lambda Aquarii (λ-Aqr , 73 Aqr): 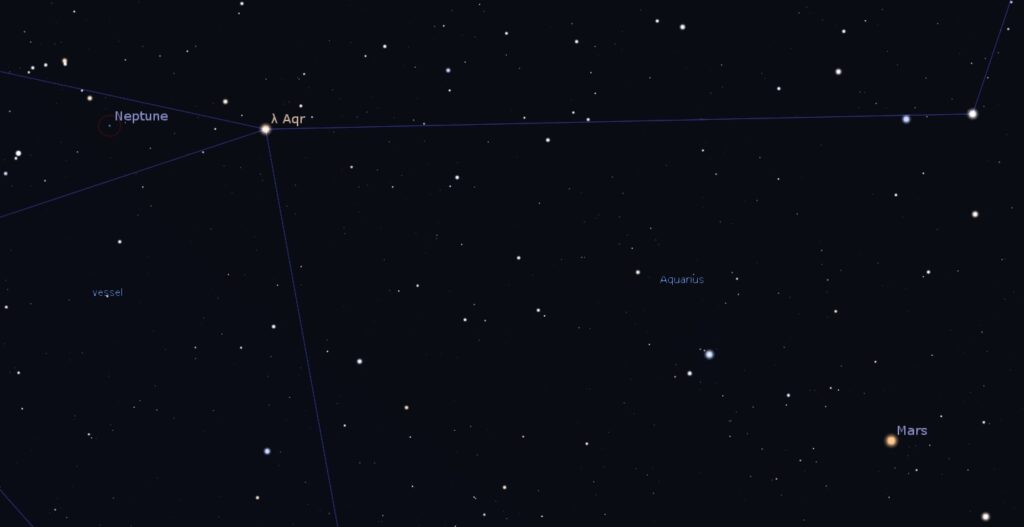 Close-up of the location of Neptune and Mars on Nov. 20, 2018. Credit: Stellarium / Bob Trembley.

Uranus is above the Moon! Yea, I said it! Actually, when generating images for this post, this image made me laugh pretty hard… Uranus will appear above the waxing gibbous Moon in the eastern sky after sunset on Nov. 20th. 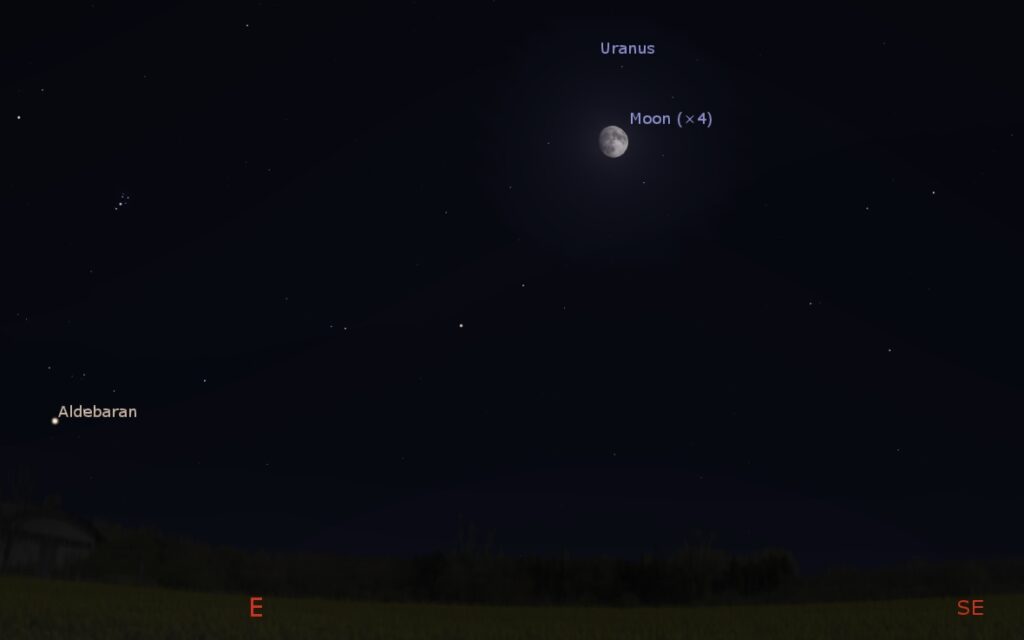 Uranus is above the Moon in the eastern sky after sunset on Nov. 20, 2018. Credit: Stellarium / Bob Trembley.

The full Moon appears very near the star Aldebaran after sunset on Nov. 23rd. 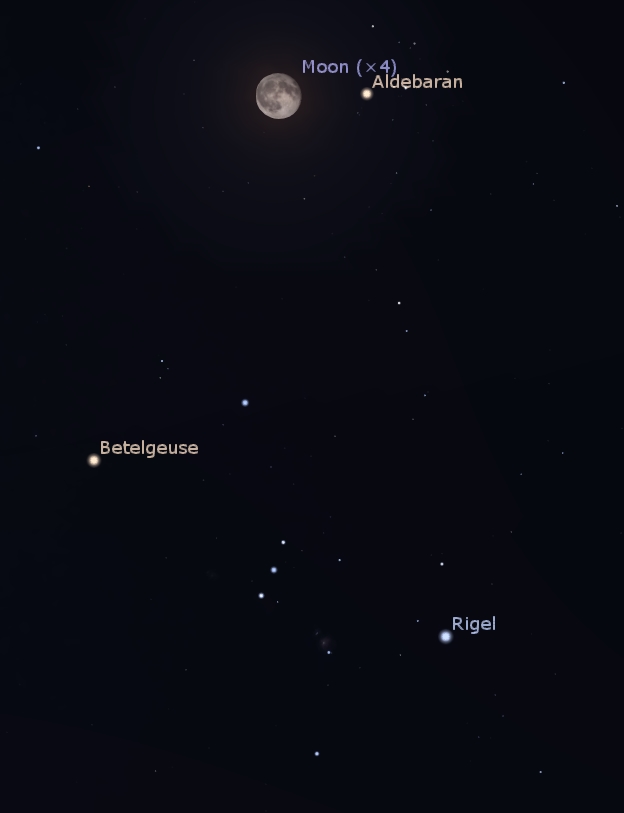 Conjunction of the Moon and Aldebaran after sunset, Nov. 23, 2018. Credit: Stellarium / Bob Trembley. 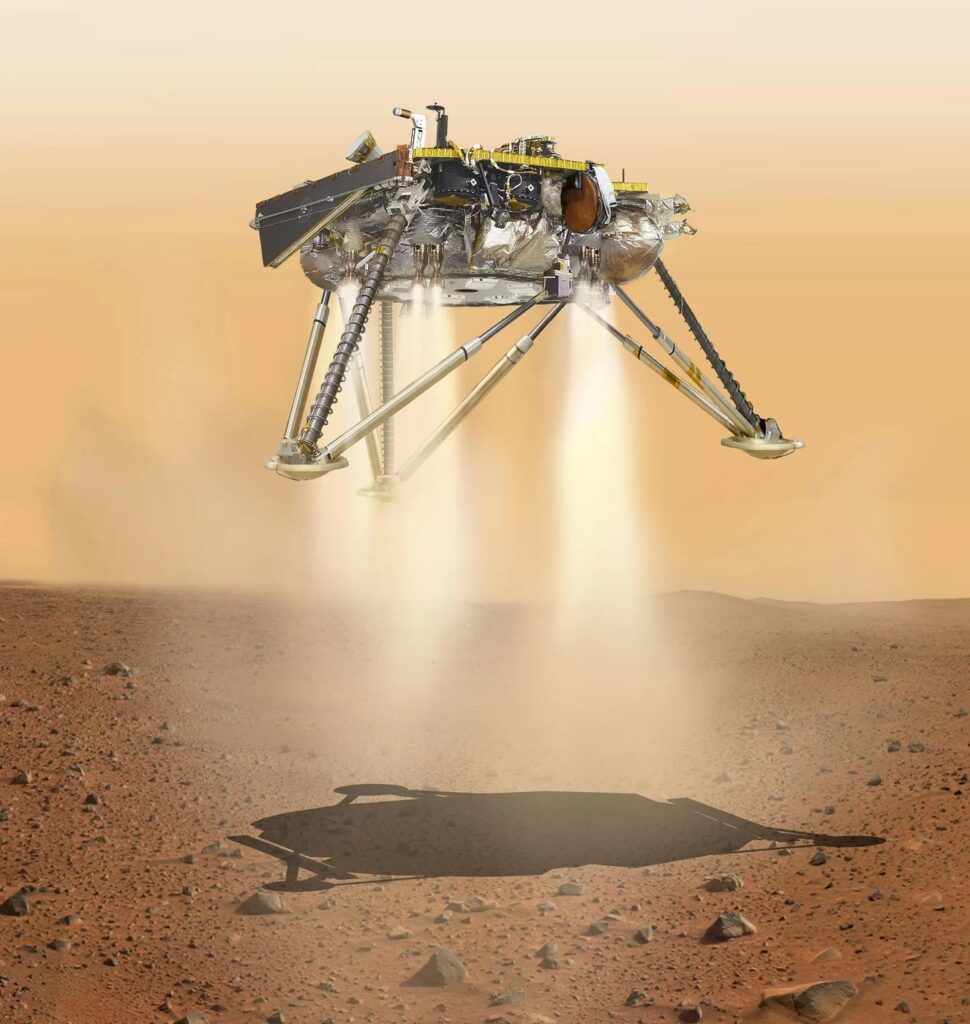 Mars InSight is the first robotic mission to study the “inner space” of Mars: its crust, mantle, and core. InSight will land on Mars on Monday Nov. 26th at 2:55 PM ET; NASA is using the media to highlight the event, with a press kit, landing events, and live broadcasts on NASA TV and YouTube.

The public can experience what it’s like to open InSight’s solar panels and place instruments on the Martian surface after landing in a special web interactive available at https://eyes.nasa.gov/insight/ 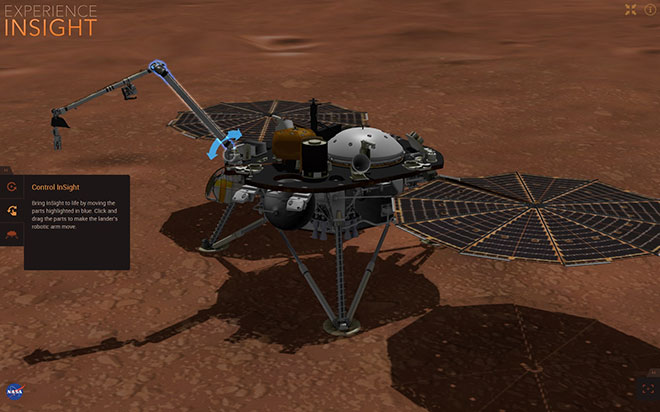 The Moon is a waxing gibbous, heading towards full on the 23rd, where it will be visible all night long. After the 23rd, the Moon will be a waning gibbous.

What’s left of sunspot AR2727 is decaying and rotating out of view: 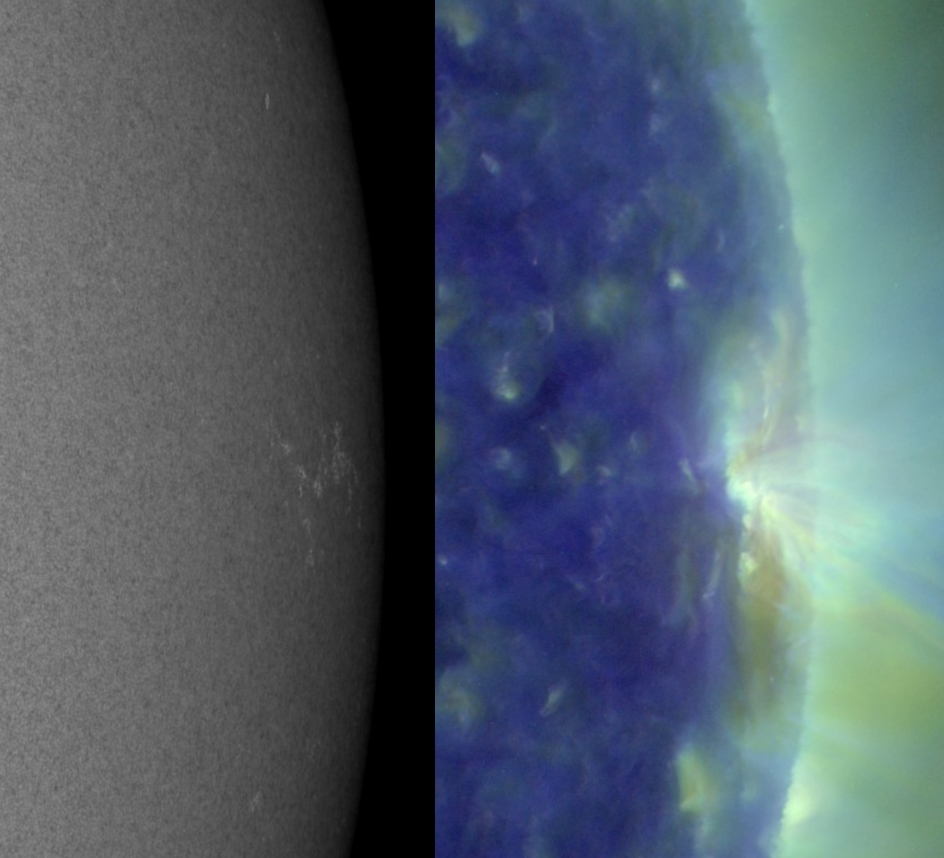 Coronal holes remains open at both poles; coronal activity associated with AR2727 can be seen on the right of the animation below. Some coronal loop activity can be seen rotating into view on the left of the animation below. SpaceWeather.com says “Today, a minor stream of solar wind is brushing against Earth’s magnetic field, causing geomagnetic unrest and intermittent auroras around the Arctic Circle. The action of this solar wind stream should continue for another ~24 hours.”

Prominences appear to be short-lived for the last couple days… not that I’ve been able to see any – living here in Mordor Michigan, the clouds have broken only for a few moments in the last several days.

Update: Early this morning, I brushed snow off the car before my wife left for school; as I was pouring the last cup of coffee from the pot, I noticed the sky to the east is a brilliant blue! NO CLOUDS! I rushed to the south window and looked out… mmrph… clouds… But, hey – first blue I can remember in days! 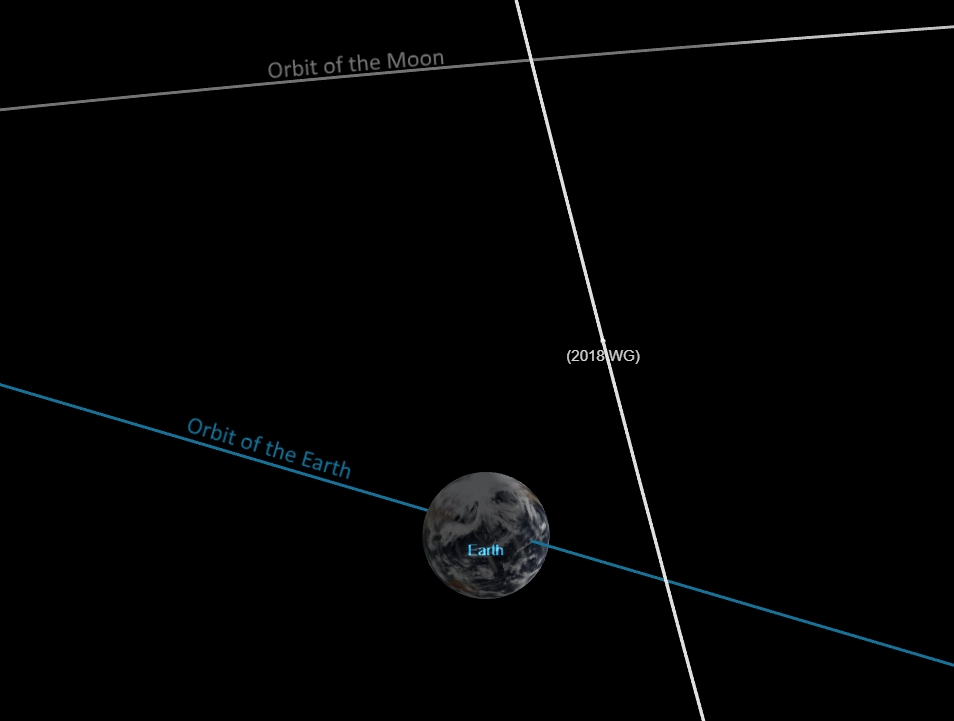 In this diagram of the inner solar system, all of the fireball orbits from Nov 19, 2018 intersect at a single point–Earth. Source: Spaceweather.com

This is the position of the planets and a couple spacecraft in the solar system; The Parker Solar Probe has almost recrossed the orbit of Mercury after perihelion 1, and Mars InSight will land on Mars on Monday Nov. 26th, at 2:55 PM ET. 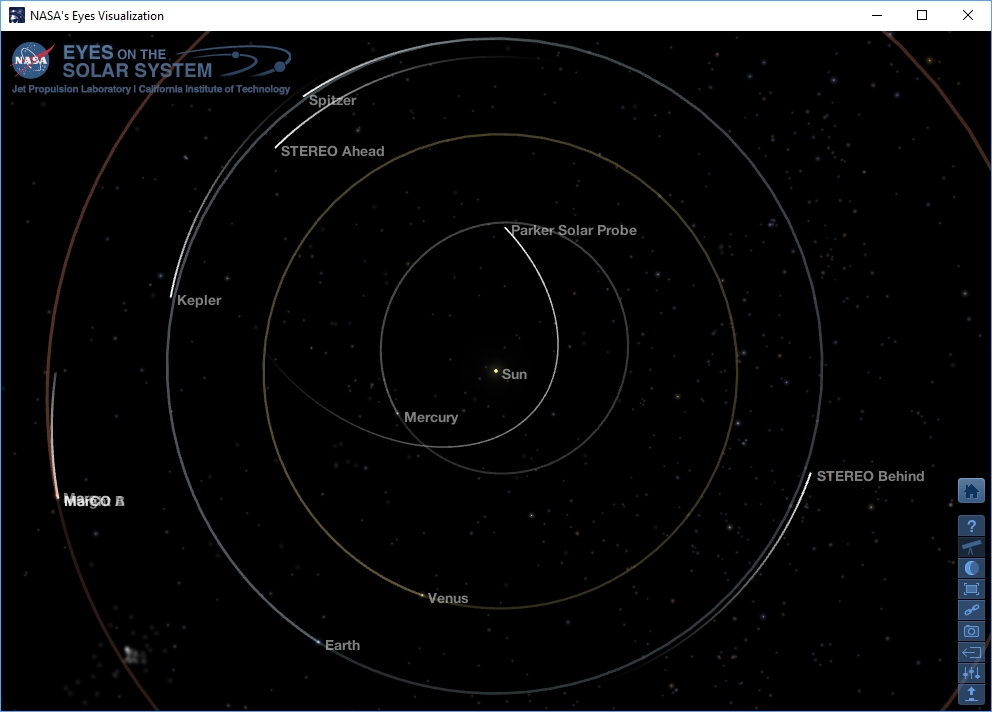 Position of the planets in the inner solar system, Nov. 20, 2018. Credit: NASA Eyes on the Solar System / Bob Trembley.

What will Parker Solar Probe see in the slow solar wind close to the Sun? We'll find out in two weeks. In the meantime, here's some quasi-informed speculation!https://t.co/FAJ0mJRbzq pic.twitter.com/HQSgkRm6hE

Over the next couple of days, I'll conduct two spins called Sample Mass Measurements. My team will use the results as a baseline to compare with similar spins that I'll perform after TAGing Bennu in order to confirm the mass of the sample collected. https://t.co/jkH5W64e9q pic.twitter.com/QxLqF3ayl0

I'm now only about 120 kilometers (75 miles) from #asteroid Bennu and recently completed a test of TAGSAM, my sample collection system. #WhereIsOSIRISREx

@NASAInSight lands on Mars a week from now, on November 26! InSight will investigate the deep interior of Mars to further our understanding of the rocky planets. Discover more about science of InSight and watch live landing coverage at https://t.co/wV0r9XTQ7n pic.twitter.com/WcICTQHKir

Voyager 2 – Almost at the edge of the Sun’s Magnetic Influence!

Rumors of Voyager 2's exit from the heliosphere have been greatly exaggerated. Check out the y-axis on this graph. It goes down to 19. We're waiting for a count of near zero heliospheric particles/sec before she's joined me in interstellar space. https://t.co/XVeZIbGO5a pic.twitter.com/6fMJWoUbQ3