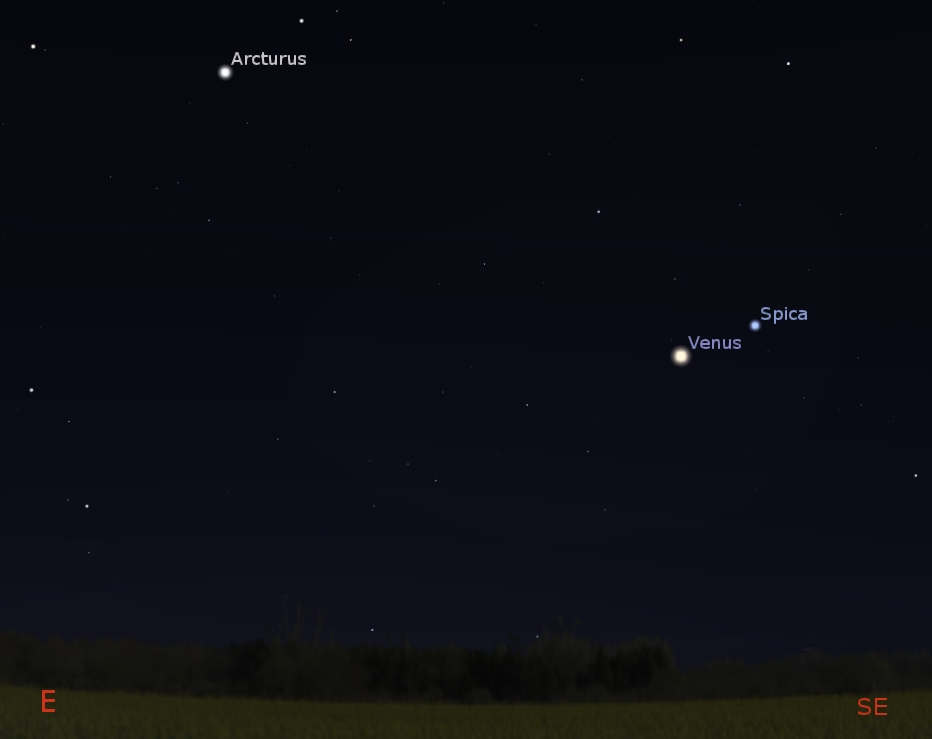 Venus and Spica continue their predawn conjunction in the southeastern sky.

Mars is high in southern sky after sunset all week. 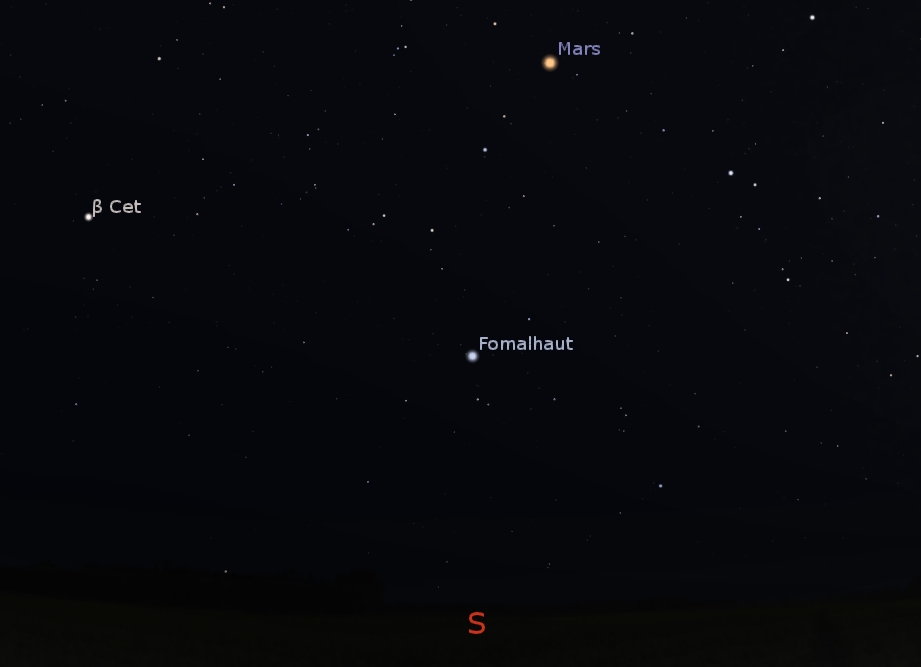 Mars is high in the southern sky after sunset on Nov. 27, 2018. Credit: Stellarium / Bob Trembley.

The International Space Station will pass very near Saturn low in the southwestern sky at 5:42 PM ET on Nov. 27th. 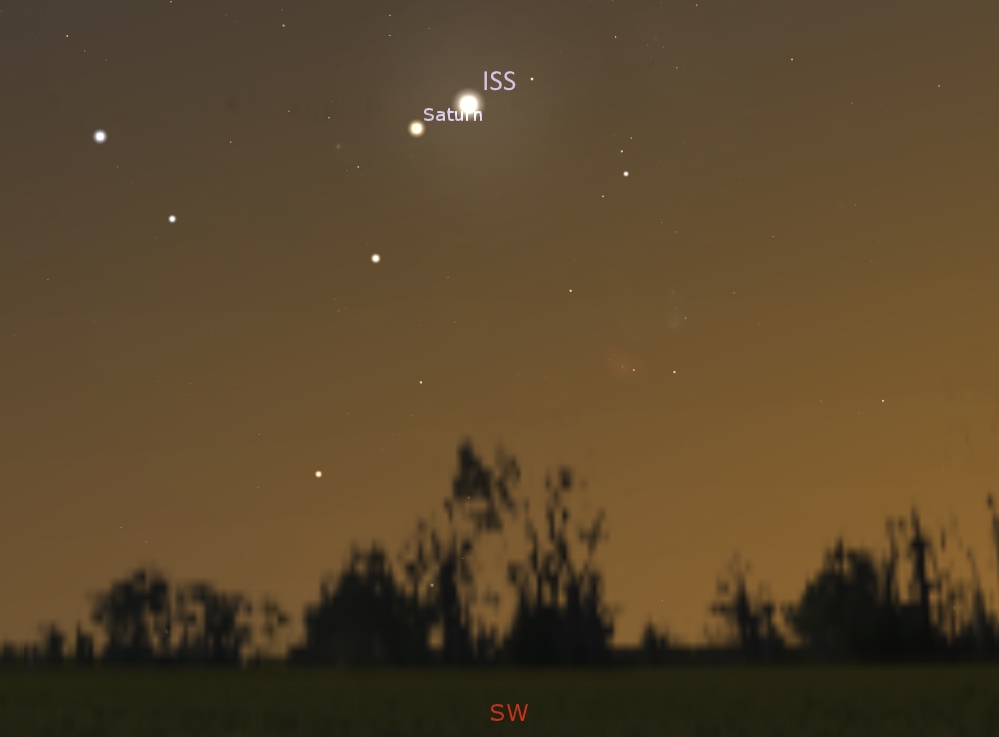 To be honest, when I saw this in Stellarium I thought something was a bit weird – I knew there wasn’t going to be a bright star near Saturn … then I clicked on it to find it was the ISS. This ISS flyover will only be visible in southeastern Michigan (sorry). To check of you can see the ISS this week, go to heavens-above.com – you can get charts like this: 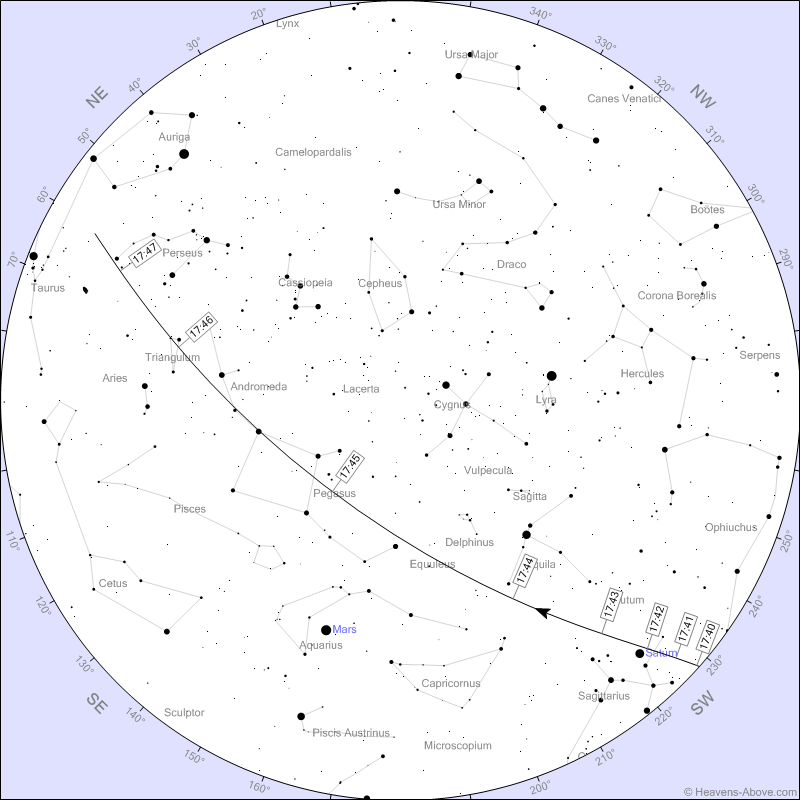 The nearly third-quarter Moon will appear very near the star Regulus in the southeastern predawn sky on Nov. 29th. 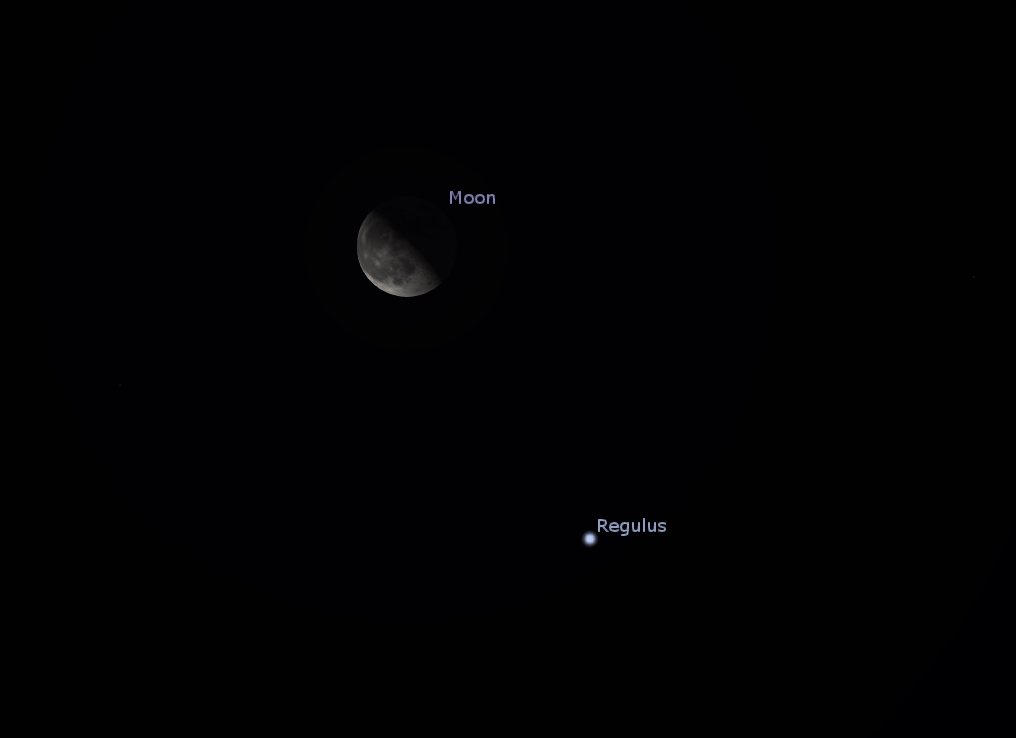 The Moon near the star Regulus hight in the southeastern sky at 5:00 AM on Nov. 29th. 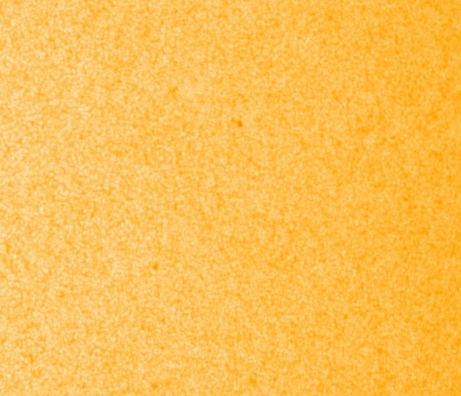 Spaceweather.com claims the Sun has been spot-free for 1 day; I’m going to challenge that with this SDO close-up from Nov. 27th – There are two dark areas that happen to coincide nicely with the bright active region on the Sun’s equator in the animations below. They ARE tiny tho, and fading fast.

Coronal holes are still open at both poles; a large “>” shaped coronal hole is rotating into view, and a smaller equatorial hole is rotating out of view. SpaceWeather.com says “Geomagnetic storms (G1-class) are likely on Nov. 30th or Dec. 1st when a stream of solar wind is expected to hit Earth’s magnetic field. The gaseous material is flowing from a large hole in the sun’s atmosphere. This is a long-lasting hole that has lashed Earth with solar wind about once a month since July. The last time it happened on Nov. 4th, auroras were sighted in multiple northern-tier US states.”

A “sundiver” comet can be seen in this Solar & Heliospheric Observatory (SOHO) video from Nov. 24, 2018! 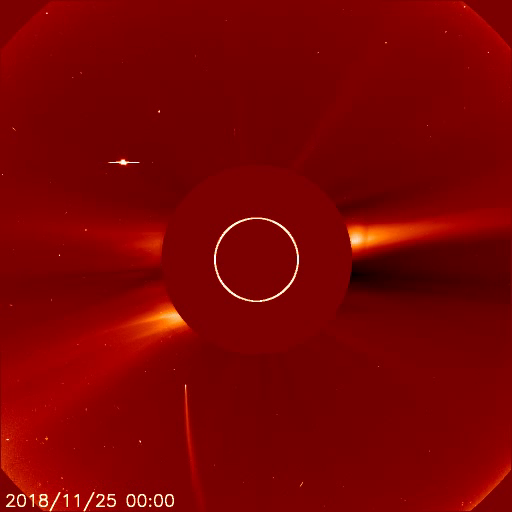 When I was working on the Sun portion of this post (above), I noticed that the live-feed from NASA’s Solar & Heliospheric Observatory (SOHO) showed a comet plunging in to the Sun! The SOHO website has a movie gallery of comets that have grazed the Sun and flown-by, and some others that did not survive the encounter.

You can “observe” these comets from the comfort of your office or living room.

In this diagram of the inner solar system, all of the fireball orbits from Nov 26, 2018 intersect at a single point–Earth. Source: Spaceweather.com

This is the position of the planets and a couple spacecraft in the solar system; The Parker Solar Probe has recrossed the orbit of Mercury, and InSight has successfully landed on Mars – more below! 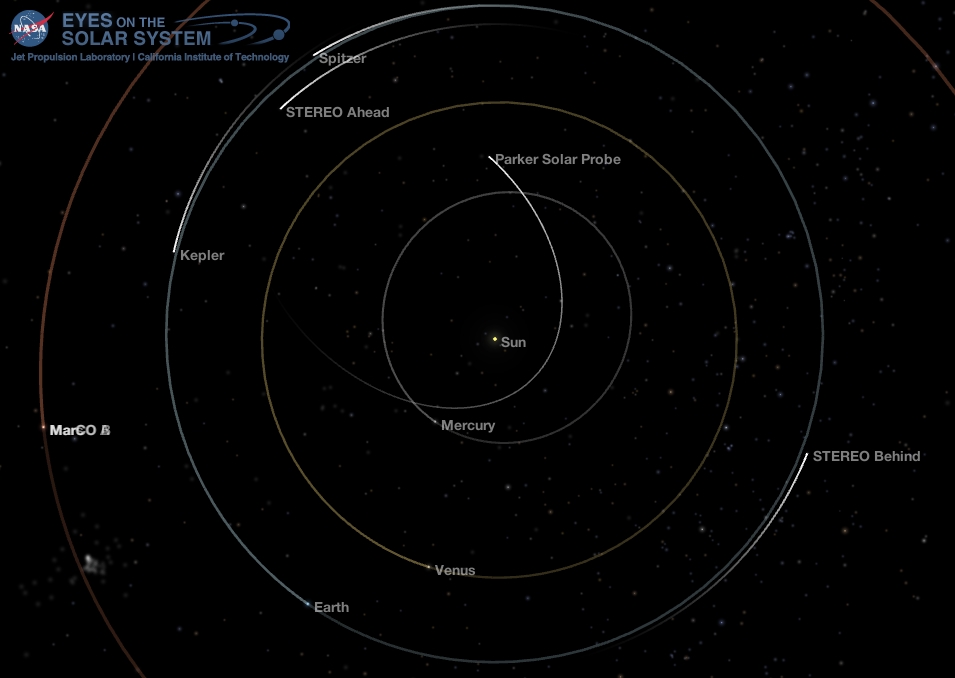 Position of the planets in the inner solar system, Nov. 27, 2018. Credit: NASA Eyes on the Solar System / Bob Trembley. 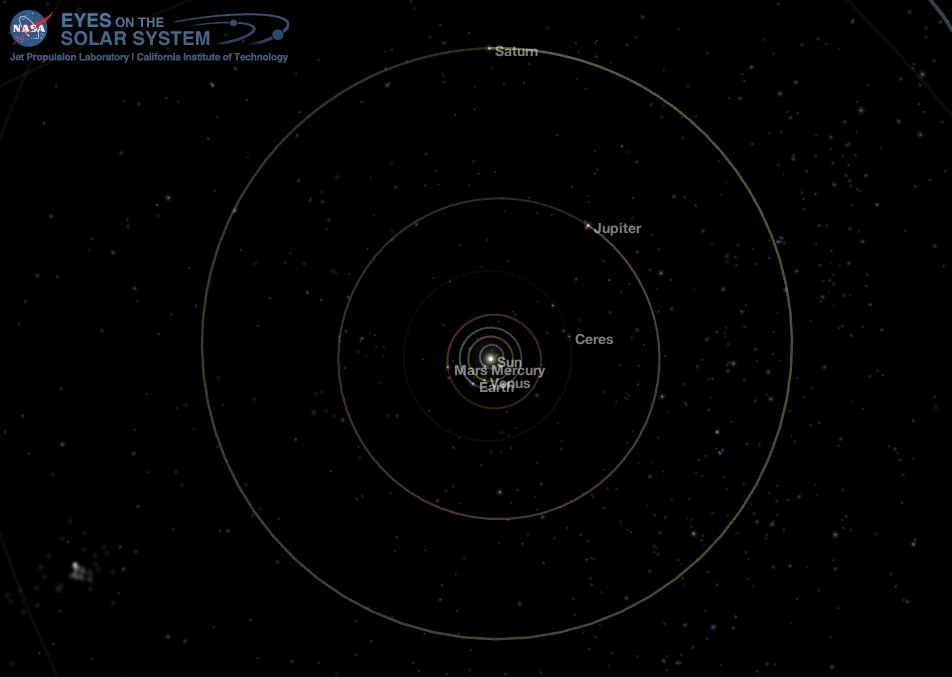 Position of the planets in the middle solar system, Nov. 27, 2018. Credit: NASA Eyes on the Solar System / Bob Trembley. 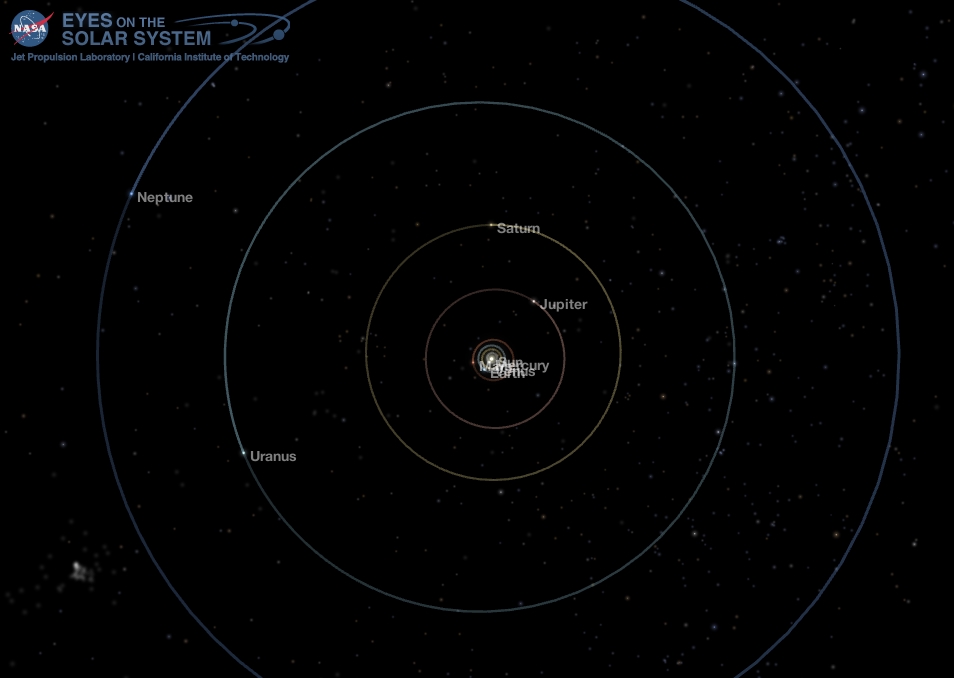 Position of the planets in the outer solar system, Nov. 27, 2018. Credit: NASA Eyes on the Solar System / Bob Trembley.

Mars InSight – Lands Successfully!
Happy mission control specialists and engineers are happy! This NEVER gets old! I LOVE that they are all wearing custom logoed shirts! I think this needs to become “a thing” with NASA missions.

Its new home is Elysium Planitia, a still, flat region where it’s set to study seismic waves and heat deep below the surface of the Red Planet for a planned two-year mission. Learn more: https://t.co/fIPATUugFo pic.twitter.com/j0hXTjhV6I

The first image from the surface of Mars was returned in mere moments; I’m not sure if this is a tradition or what, but the first image returned for the last few landers seems to be the “dusty lens cover view of the horizon.”

? Wish you were here! @NASAInSight sent home its first photo after #MarsLanding:

InSight’s view is a flat, smooth expanse called Elysium Planitia, but its workspace is below the surface, where it will study Mars’ deep interior. pic.twitter.com/3EU70jXQJw

Jason Major posted this image processed to remove the dust

Here's a version of @NASAInSight's first #Mars image edited to remove the distracting debris from the lens cover and some barrel distortion. For aesthetic enjoyment only (and until we see a new version from the lander!) #MarsLanding pic.twitter.com/Kdf9yxwPvX

Image from a camera on the lander’s robotic arm

The two MarCO CubeSat attendants preformed perfectly; you can expect to see more spacecraft like them in the future.

After relaying live communications for @NASAInSight as it landed, the tiny #MARCO B cubesat sent back this farewell image of the planet. #MarsLanding pic.twitter.com/EQzrLX8fsv

It now takes nearly 14 minutes round-trip for me to communicate with my team back on Earth. ? ↔️ ? My light time will increase as I approach #asteroid Bennu and will be more than 20 minutes during sample collection.

(No change from last week)