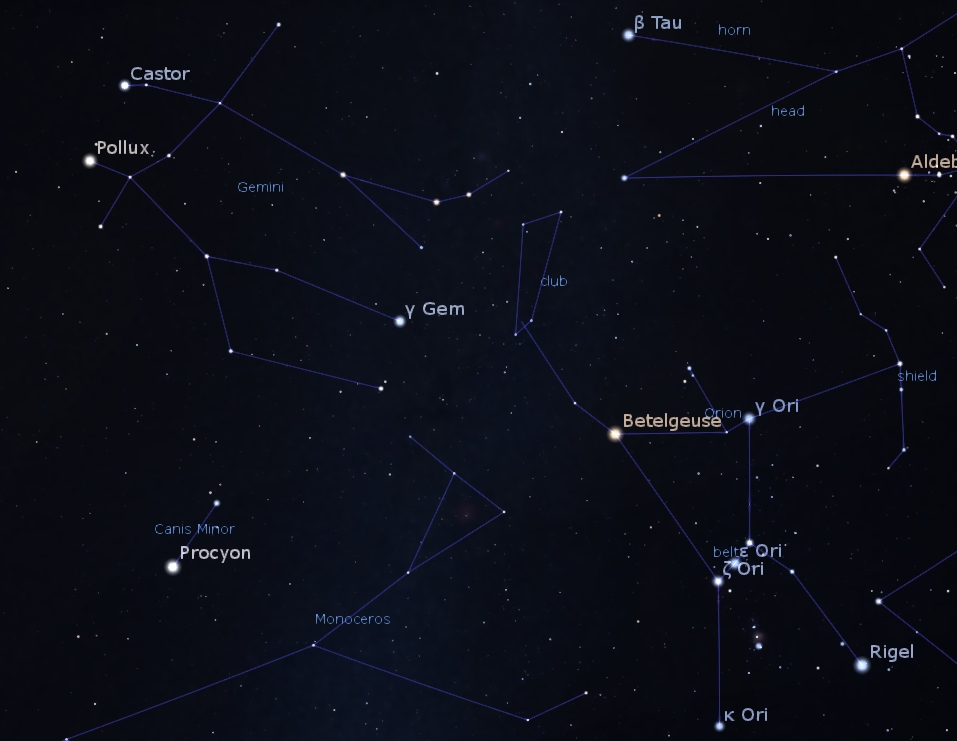 The constellation Leo with the bright star Regulus rises earlier each day in the eastern predawn sky. 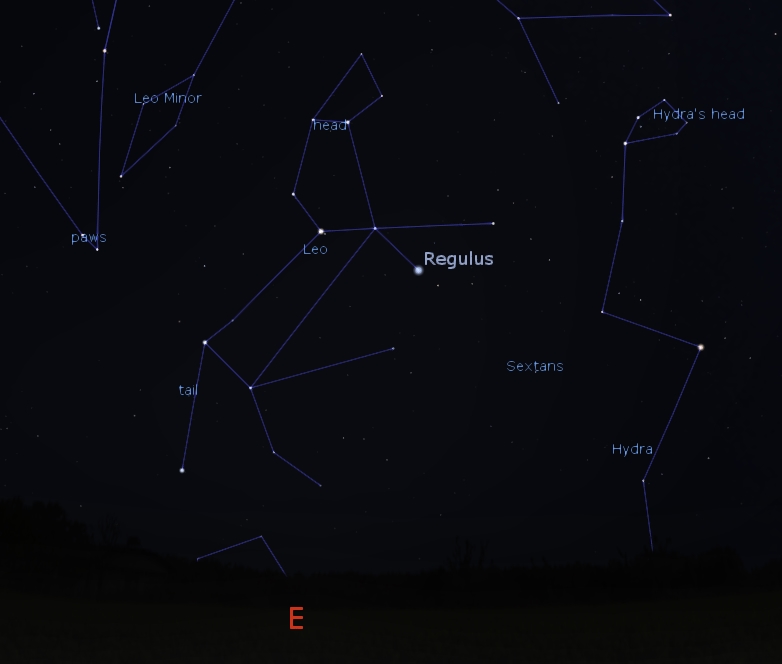 The Moon joins Mars and Saturn in the southern sky after sunset this week. 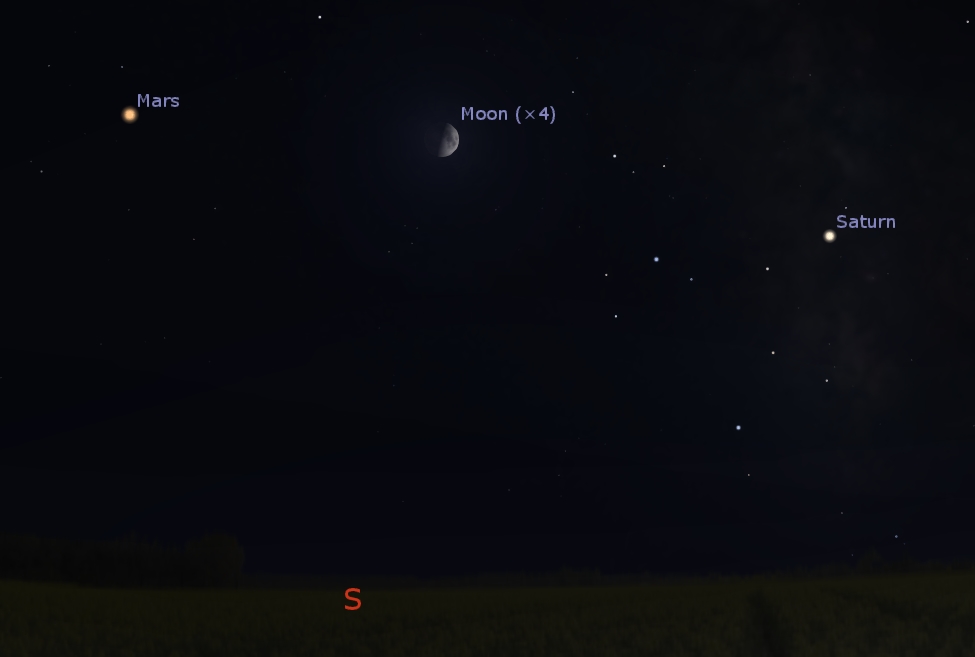 The Moon joins Mars and Saturn in the southern sky after sunset on Oct. 16, 2018. Credit: Stellarium / Bob Trembley.

Jupiter is the “evening star,” appearing low in the southwestern sky at dusk, and setting shortly after dark. If you have a clear horizon, you might be able to catch a glimpse of Mercury a few minutes after 5:00 PM. 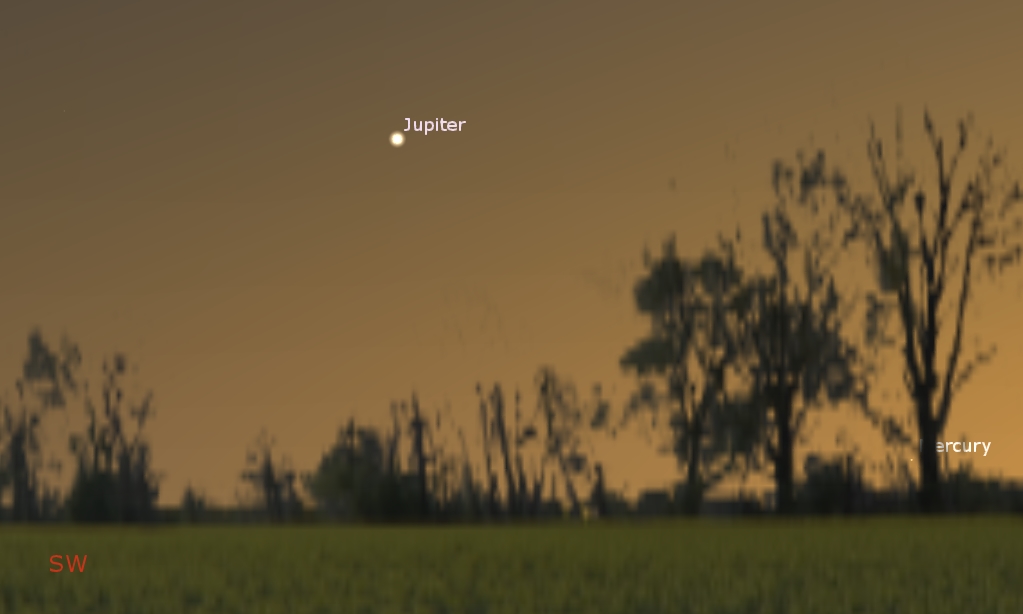 Jupiter and Mercury (maybe a bit too low to see) in the southwestern sky at dusk on Oct. 16, 2018. Credit: Stellarium / Bob Trembley.

Comet 46P/Wirtanen is within the orbit of Mars, and it is heading in our direction – it will pass within 11.5 million kilometers (30.23 lunar distances) of Earth – that’s REALLY close! It should be a fantastic observing target. BUT! It’s a comet… I can’t count the number of times I’ve see media prophecies of  “Comet of the Year” fall flat. But I’ll sure HOPE it turns out being great – it’ll be visible for several months, so it’ll have a lot of time to be great! 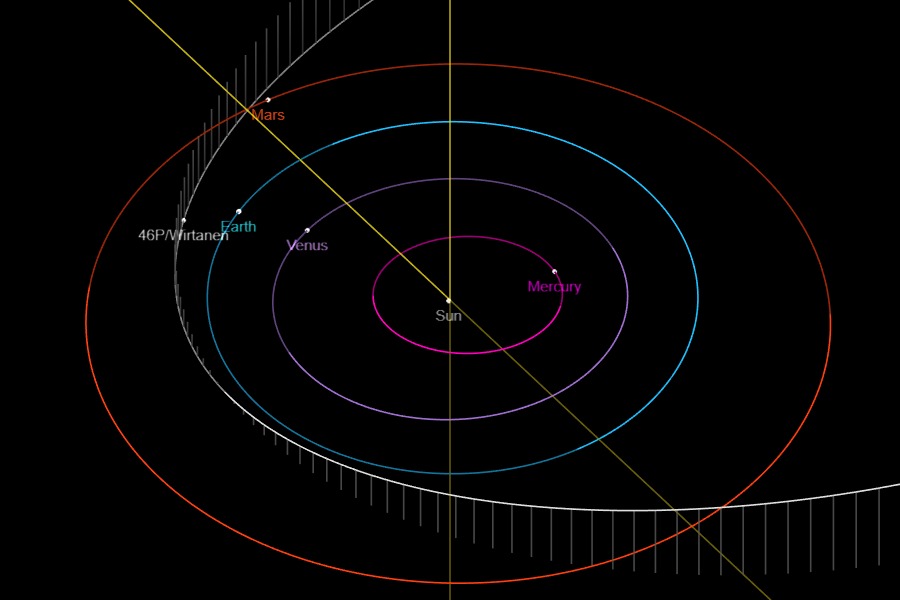 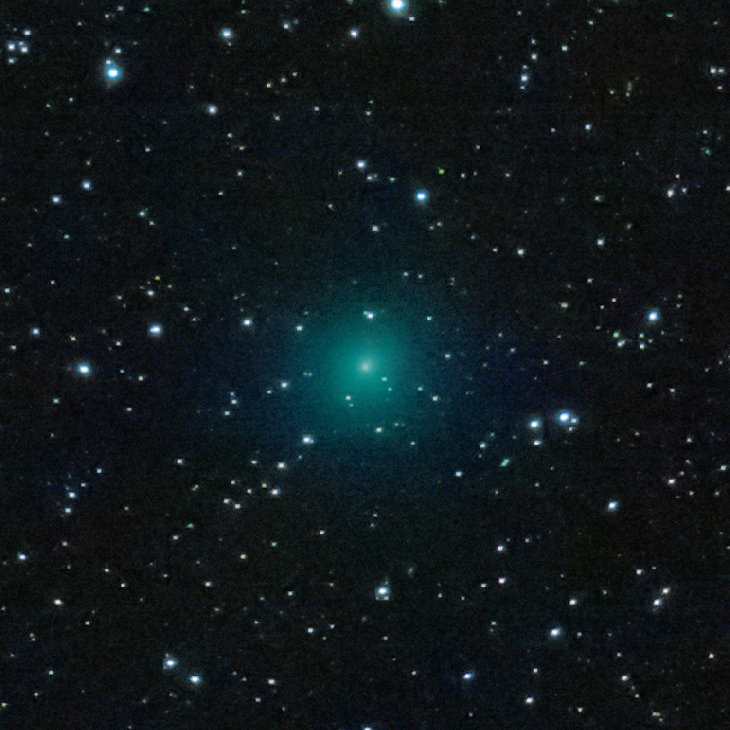 You can find Comet 46P/Wirtanen low in the southern sky after midnight this week: 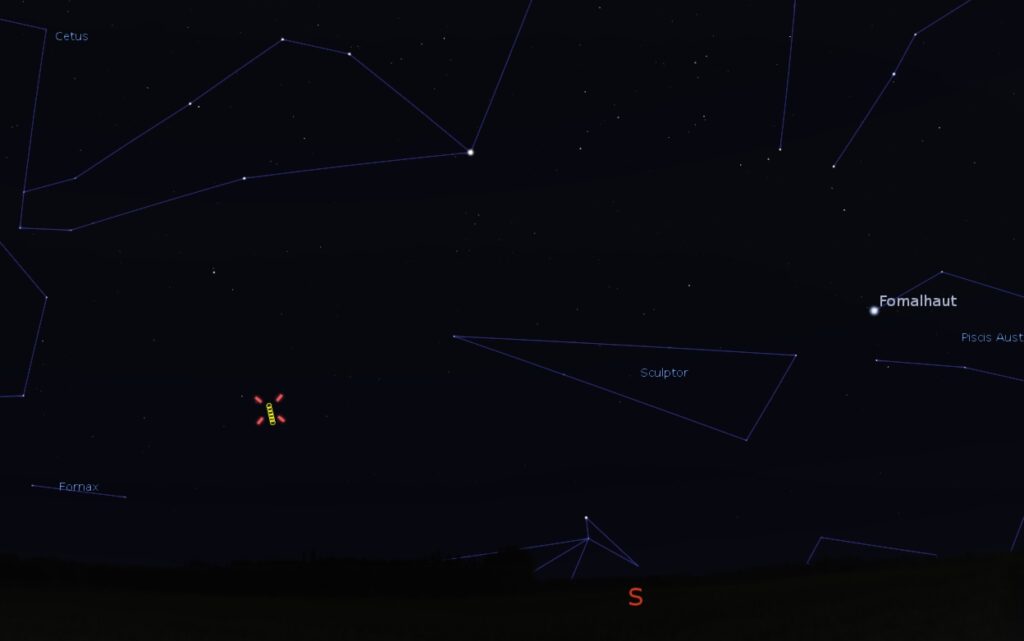 Position of Comet 46P/Wirtanen at midnight during the week of Oct. 16-22, 2018. Credit: Stellarium/ Bob Trembley

SpaceWeather.com says that sunspot AR2725 is decaying – after squinting at a 4K hi-rez photosphere image, I sure couldn’t see anything remaining of it – BUT just look at the boiling region of coronal activity near the equator in the animation below!

A few small prominences have appeared on the Sun’s limb in the last couple days – if you look closely at this animation, you’ll see several pillar-type prominences pop-up and vanish in a single frame or two.

The Orionids are a medium strength shower that sometimes reaches high strength activity. In a normal year the Orionids produce 20-25 shower members at maximum. In exceptional years, such as 2006-2009, the peak rates were on par with the Perseids (50-75 per hour). At this time we are unable to predict exactly when the Orionids will be exceptional but there are theories that there may be a 12 year period in this cycle. 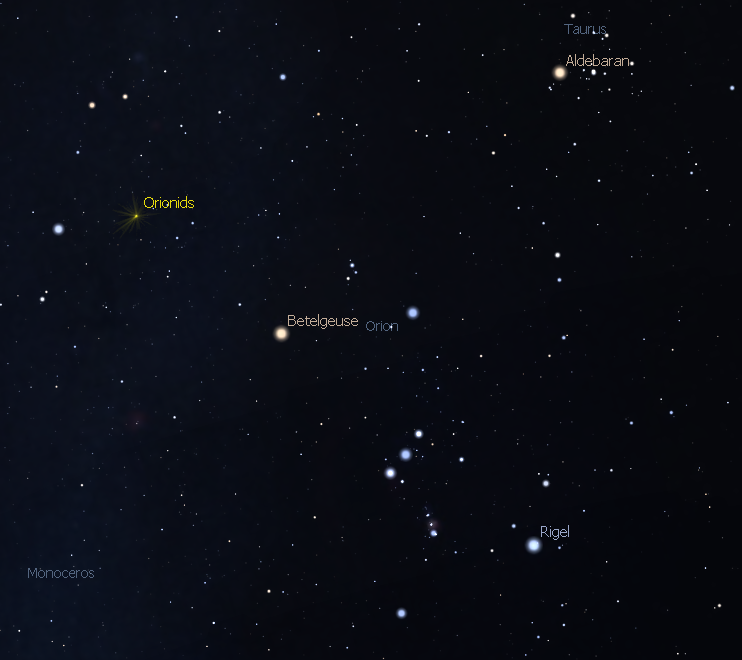 This is the position of the planets and a couple spacecraft in the solar system – it amazes me how quickly the Parker Solar Probe has reached in-system, and Mars InSight is getting real close! 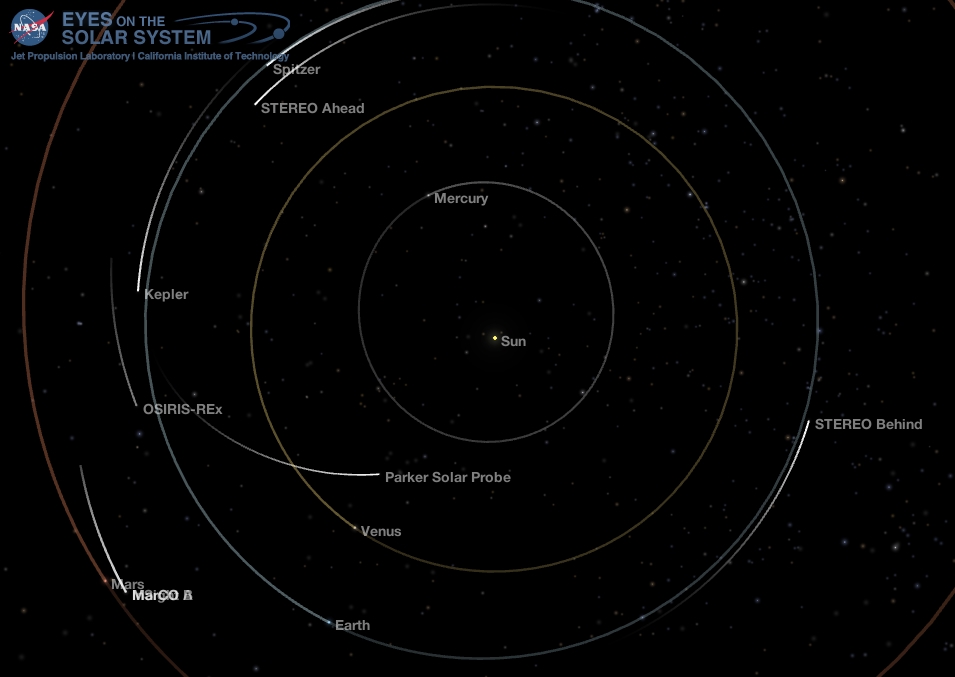 Position of the planets and several spacecraft in the inner solar system, Oct. 16, 2018. Credit: NASA Eyes on the Solar System / Bob Trembley. 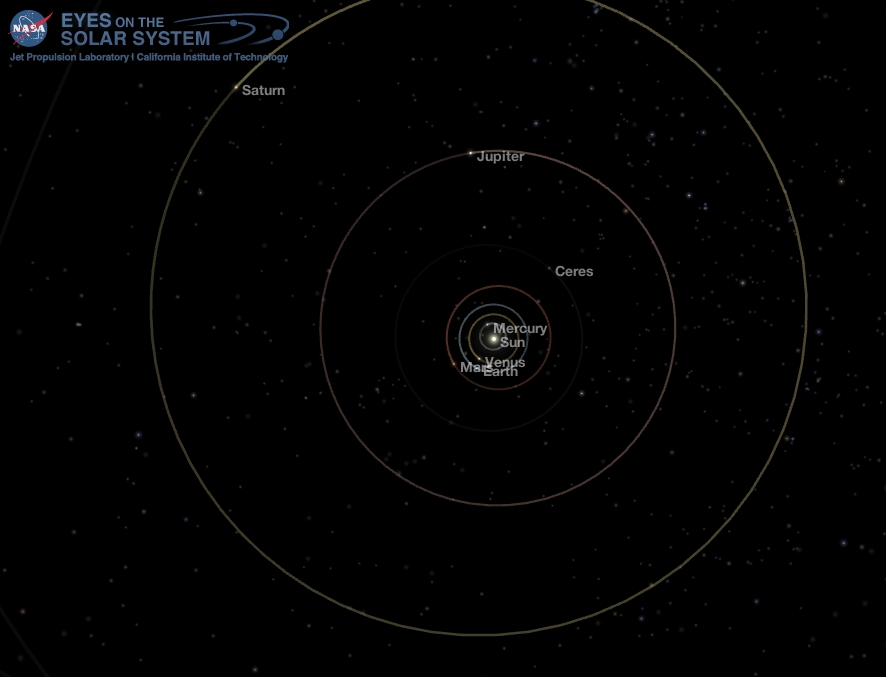 Position of the planets in the middle solar system, Oct. 9, 2018. Credit: NASA Eyes on the Solar System / Bob Trembley.

Earlier today, astronaut Nick Hague and cosmonaut Alexey Ovchinin landed safely on Earth after a booster on their Soyuz rocket failed. They are in good condition. https://t.co/j8orQbXiy9 pic.twitter.com/UiNHTh54tO

A speculative timeline regarding the events of Soyuz MS-10's abort yesterday. Not depicted is the core booster being pushed 7-10 degrees off course due to the failure of the side booster separation on one side.

Initial tests were conducted to assess the anomalous gyro. It is properly tracking movement, but the rates are consistently too high, exceeding the limit that it can report small movements. More tests and analysis to come. For a full update: https://t.co/yVAth8RGO6

It’s definitely getting cooler in temperature as I move away from the Sun and closer to #Mars. Do you know what else is cool? ❄️
Today, I’m 45 days away from landing on Mars! https://t.co/nCryBG5VlL pic.twitter.com/xOqwIaQUuj

The preliminary results are in, and my second Asteroid Approach Maneuver executed as expected! ??

This main engine braking burn was designed to slow my speed from about 315 mph (141 m/sec) to 11.8 mph (5.2 m/sec) relative to Bennu: https://t.co/fvAMXvFJLH #WeBrakeForAsteroids pic.twitter.com/lkPJ1LRpIo 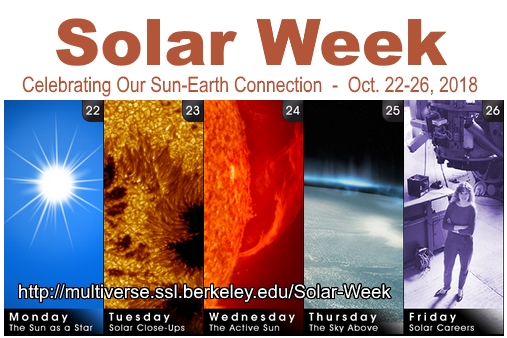 Solar Week is a week of online lessons, games and hands-on activities about the Sun for grades 5-9 or ages 9-14. Solar Week happens twice a year, approximately mid-to-late March and mid-to-late October.