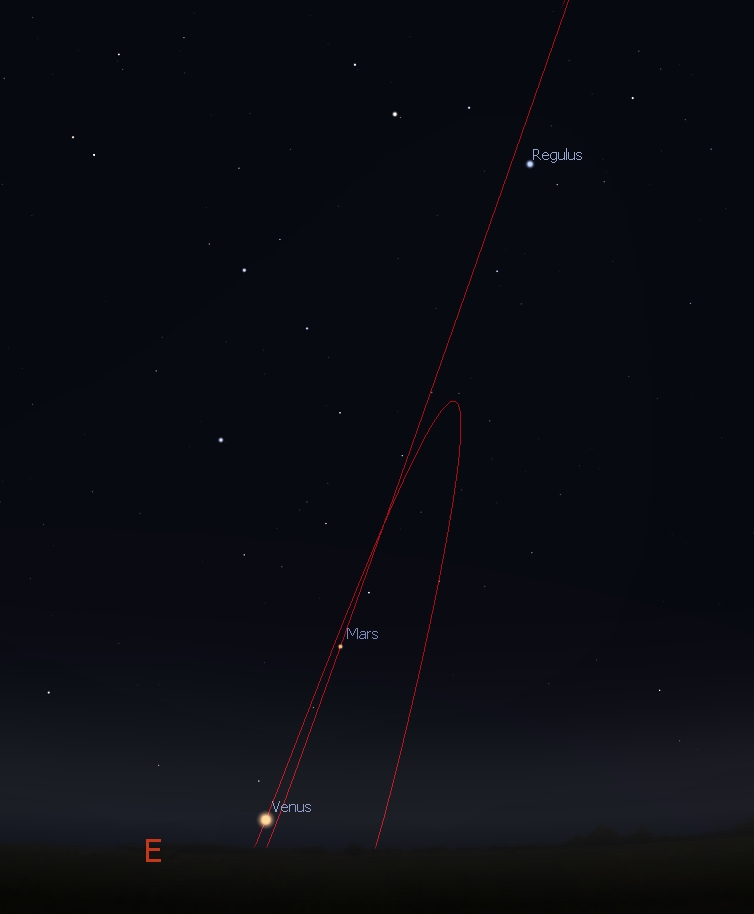 Venus is very low in the eastern predawn sky, and Mars continues to get higher each morning.

Eastern sky before sunrise, Oct. 24, 2017, the orbits of Venus and Mars are shown in red.  Credit: Stellarium / Bob Trembley.

Saturn is lower in the southwestern sky each evening after sunset, and will soon become a poor observing target. The Moon will be visible after sunset all week long, going from a waxing crescent on October 23rd, to first quarter on October 27th. 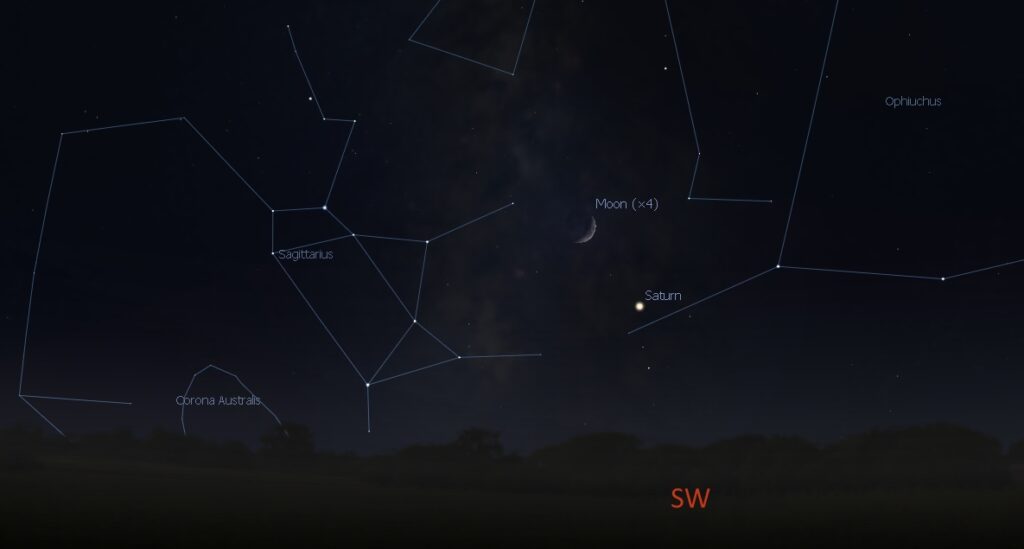 After first quarter on October 27th, the Moon will be a waxing gibbous through the remainder of the week, and should be a good observing target. 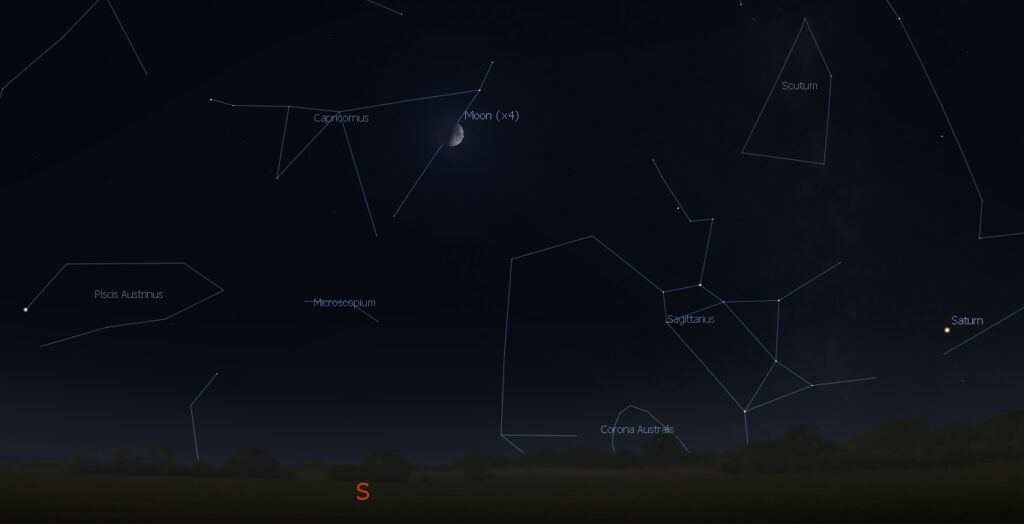 October 28th is International Observe the Moon Night, and venues around the globe will be hosting Moon observing events. You can find a nearby event here: https://www.lpi.usra.edu/inomn_wordpress/map.cfm/ 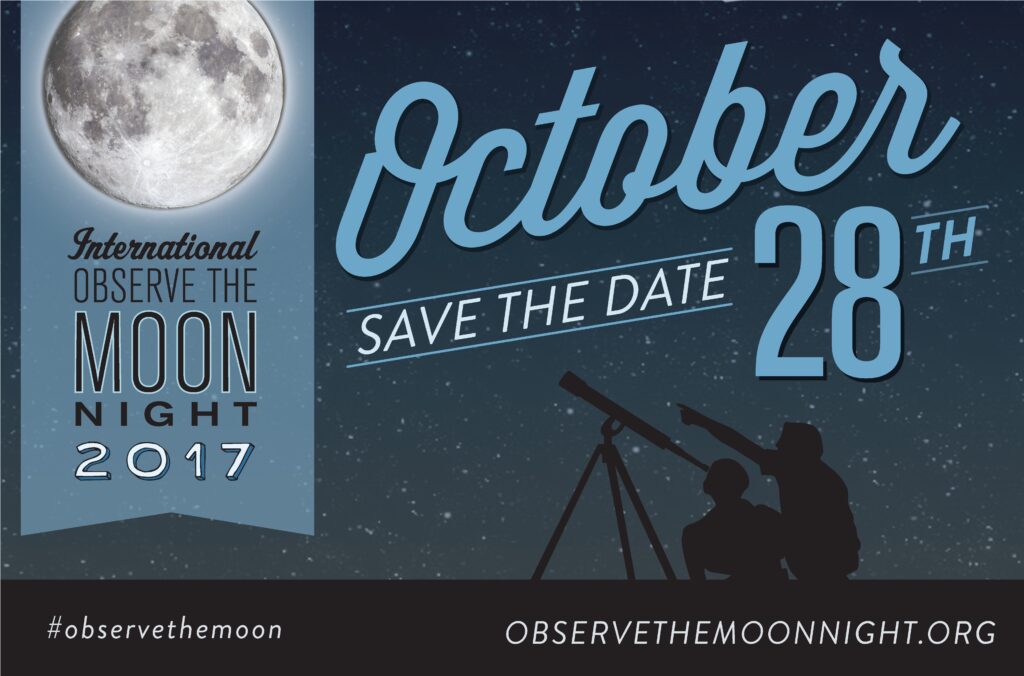 Uranus was at opposition on October 19th; planets are said to be at opposition when they are on opposite sides of the celestial sphere, as observed from a given body (usually Earth), this occurs when the Sun, Earth, and the other body are arranged in a (nearly) straight line.

Orbits of the planets out to Uranus a few days after Uranus’ Opposition. Credit: NASA Eyes on the Solar System / Bob Trembley.

While typically Uranus is only visible with a telescope, you may be able to spot it with binoculars, or even the unaided eye! 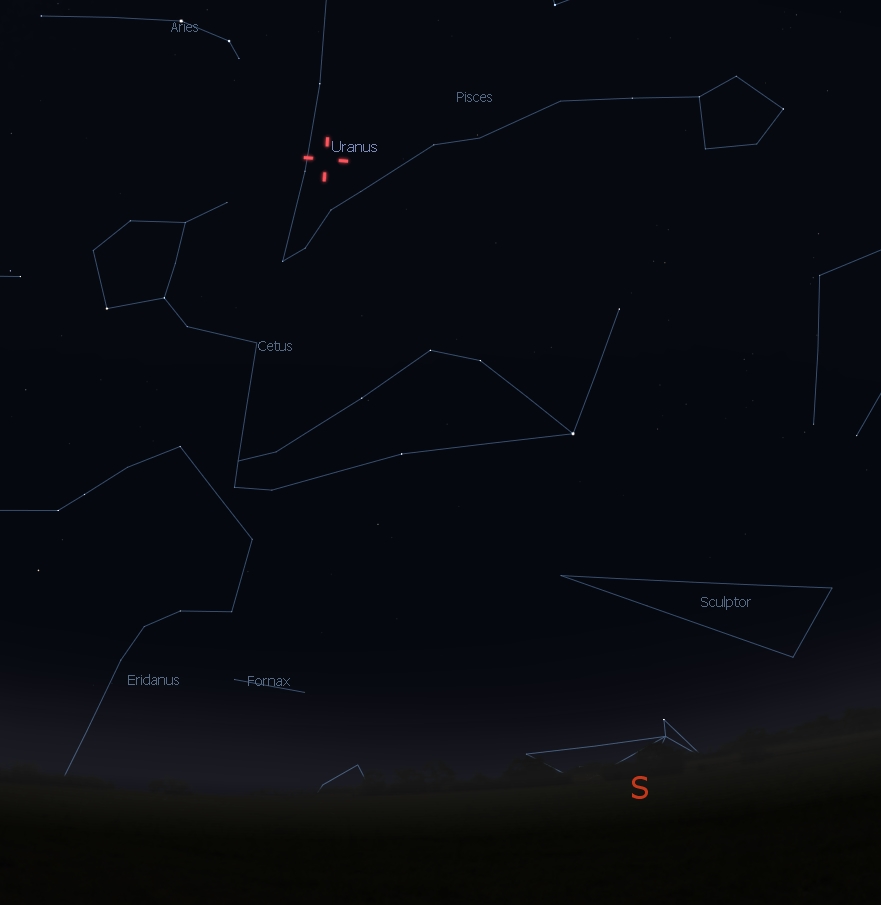 Uranus is very near the red giant star Torcularis Septentrionalis (or Omicron Piscium) in Pisces. 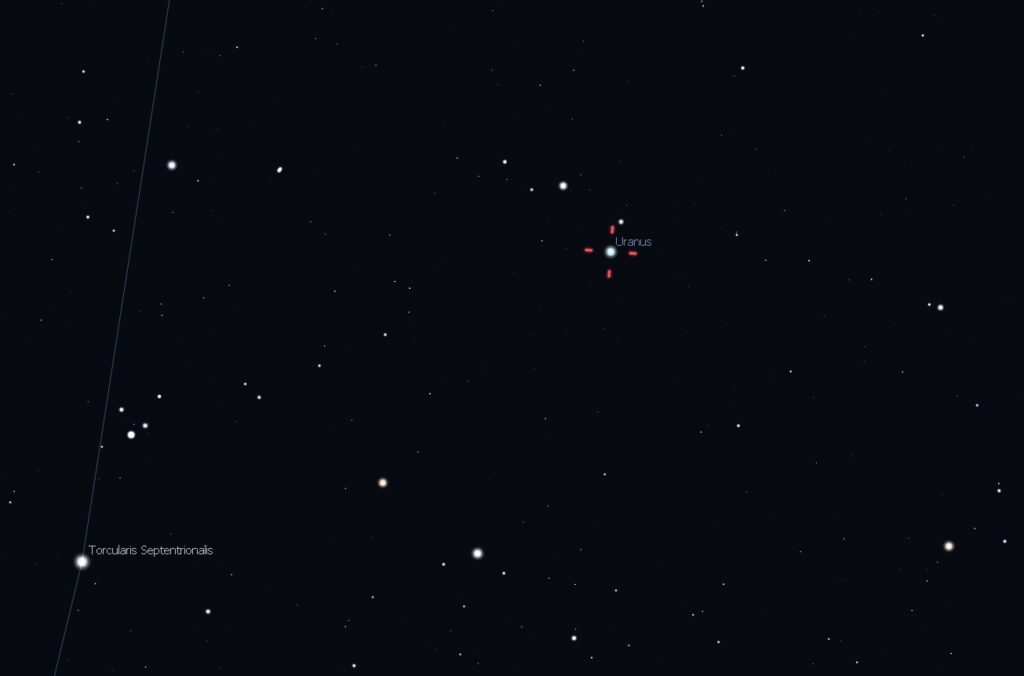 Two small sunspots have rotated into view on the Sun, breaking a two week long streak where there were no visible sunspots at all. 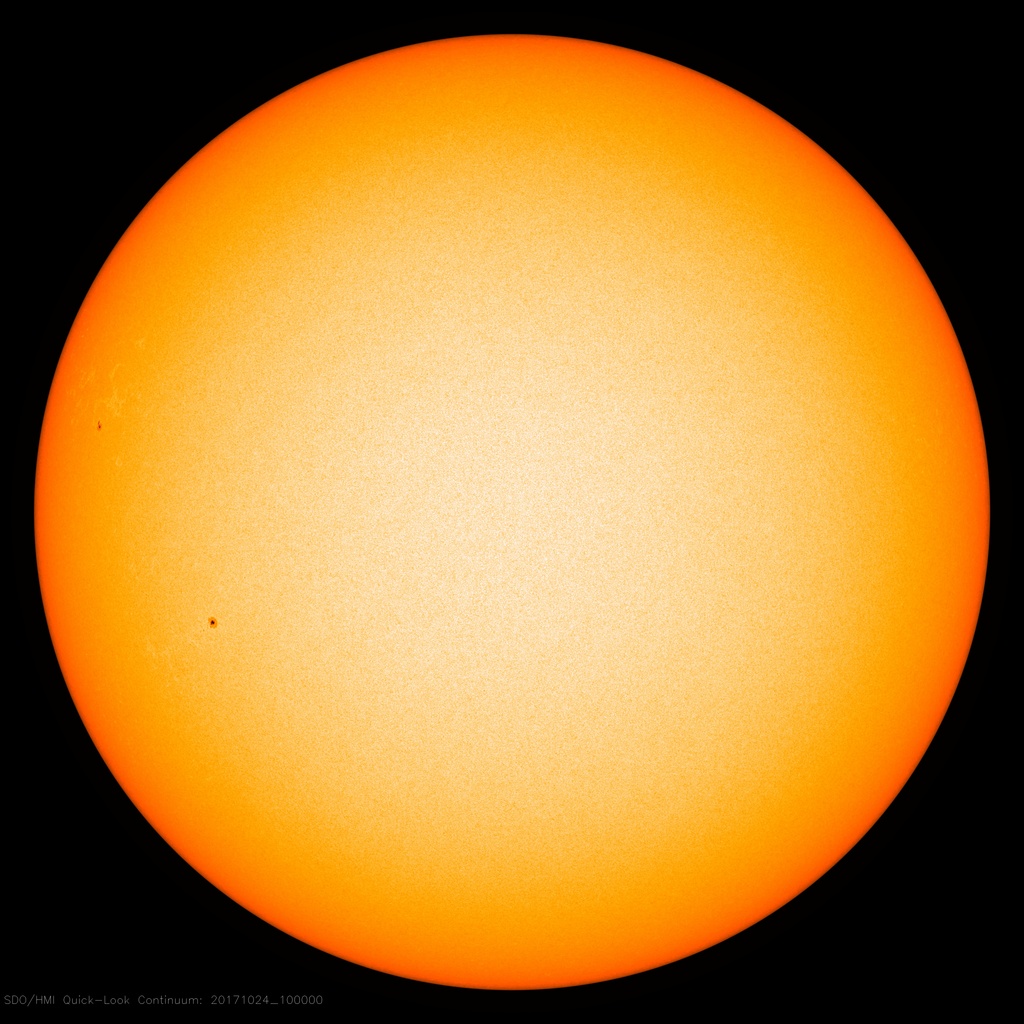 The lingering coronal hole in the Sun’s northern hemisphere is large, and pointed right at us. Spaceweather.com says: “The solar wind emerging from this hole is blowing faster than 600 km/s and is expected to reach Earth during the late hours of Oct. 24th. NOAA forecasters say there is a 45% chance of polar geomagnetic storms on Oct. 24th, increasing to 80% on Oct. 25th. Arctic auroras are in the offing.” 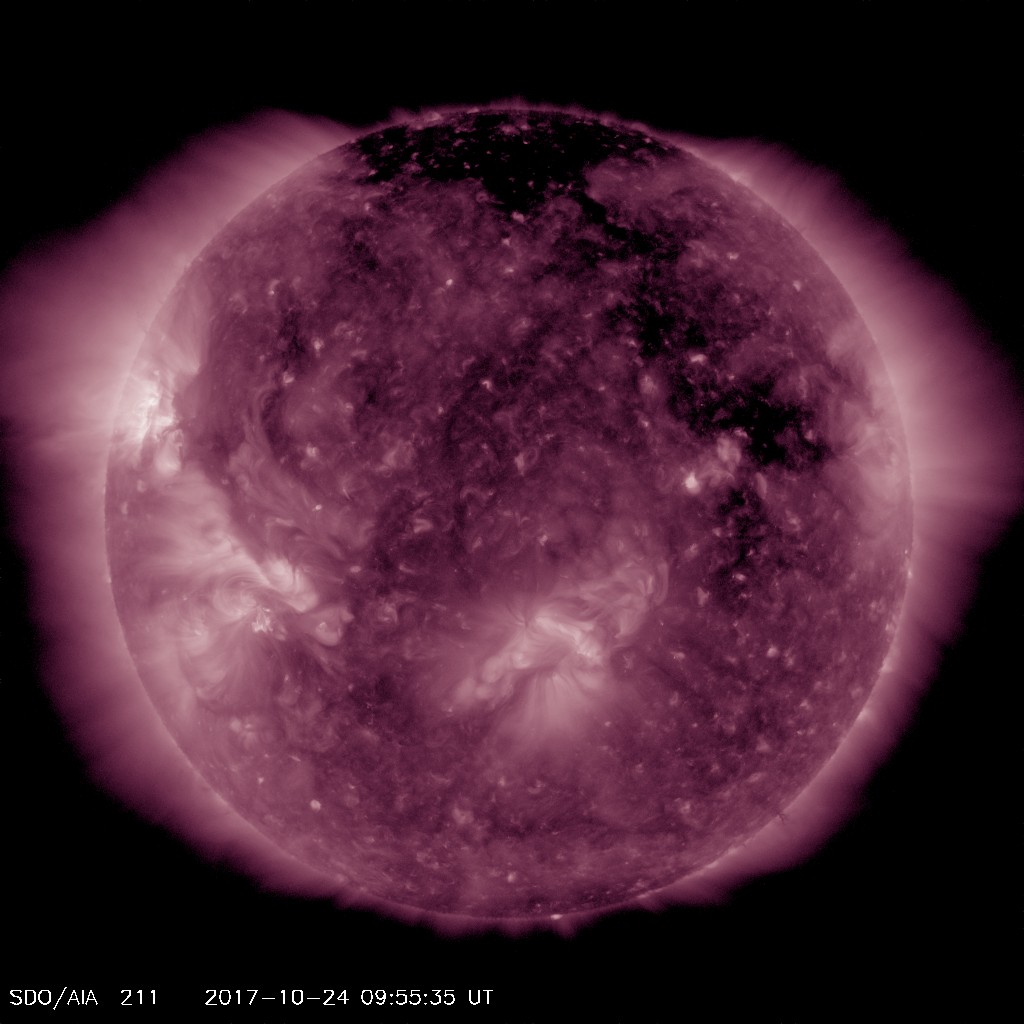 This is the position of the planets in the inner solar system using the NASA Eyes on the Solar System app; note the tilt of the orbit of planet Mercury!