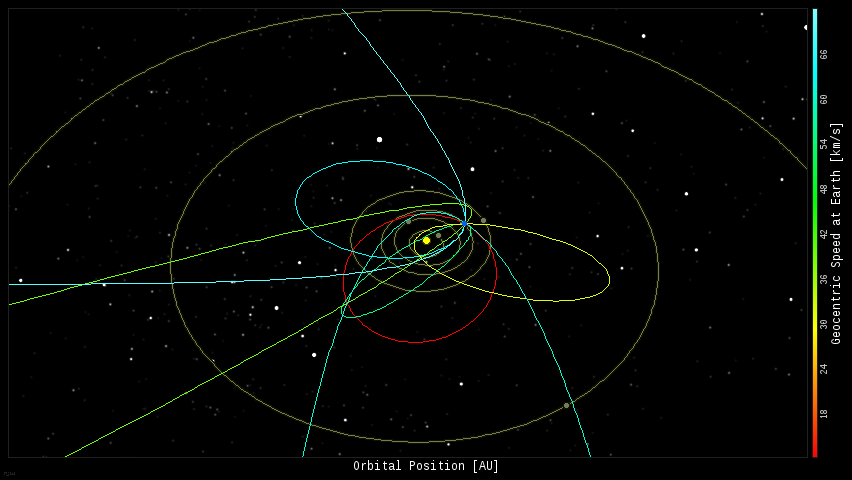 I’m a volunteer ambassador for NASA’s OSIRIS-REx asteroid sample return mission – I can not tell you how excited I am about the recent successful, maybe overly successful, sample acquisition from the surface of asteroid Bennu! The sample head is full of rocks an dust, and apparently a large rock has prevented a mylar flap from sealing the sample head, and some smaller rocks are escaping! The sample head should be safely stowed away today  – that can’t happen soon enough for me!

The pandemic has prevented me from doing in-person lectures about the mission, but I’ve been covering the mission in these weekly posts, and I was able to book Dolores Hill from the OSIRIS-REx mission to speak at the Astronomy at the Beach event – so I don’t feel too awful about my lack of lecturing…

The red giant star Arcturus competes with Venus for the title of “morning star” in the eastern predawn sky … Venus wins! 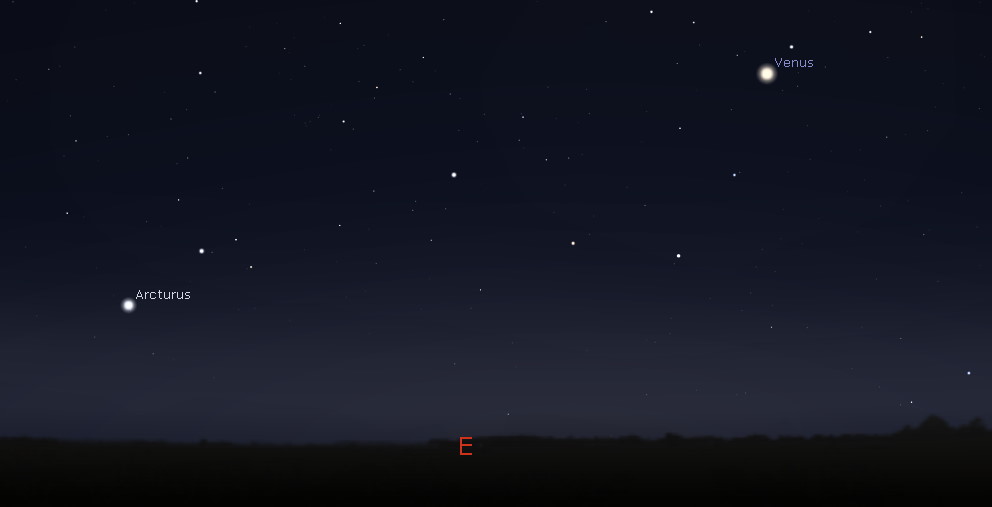 The Moon dances with Mars from Oct. 27th – 31st in the eastern sky after sunset.

The Moon dances with Mars from Oct. 27th – 31st in the Credit: Stellarium / Bob Trembley.

Saturn and Jupiter appear in the southern sky at sunset – the pair of planets appear low on the southwestern horizon at 10:30 PM.

The Moon is a waxing gibbous – visible to the southeast in early evening, up for most of the night.

The full Moon occurs on Nov. 1st – it rises at sunset, is visible high in the sky around midnight, and is visible all night.

After Nov. 1st, the Moon will be a waning gibbous – rising after sunset, visible high in the sky after midnight, and visible to the southwest after sunrise.

Annotated close-up of a section of the Moon on Oct. 27th (left) and Nov. 2nd (right) – showing the play of shadows. Visualizations by Ernie Wright / NASA’s Scientific Visualization Studio.

We’ve known that hydroxyl (OH and/or H2O) exists on the Moon for over a decade, since detection from the missions @CassiniSaturn, Deep Impact, and @ISRO's Chandrayaan-1, but these missions could not separate the OH signal from an H2O signal.

Sunspot AR2778 is the largest of new solar cycle #25; SpaceWeather.com says “The primary dark core of AR2778 is about the size of Earth. Altogether, the sunspot group sprawls 90,000 km across the face of the sun, dimensions which make it an easy target for backyard solar telescopes. Amateur astronomers with safely-filtered optics are encouraged to monitor developments.” When I was editing the image below, I noticed the tiny sunspot in the upper right – it’s not labeled on SpaceWeather.com, and I’m not sure if this is a new sunspot or an older one. 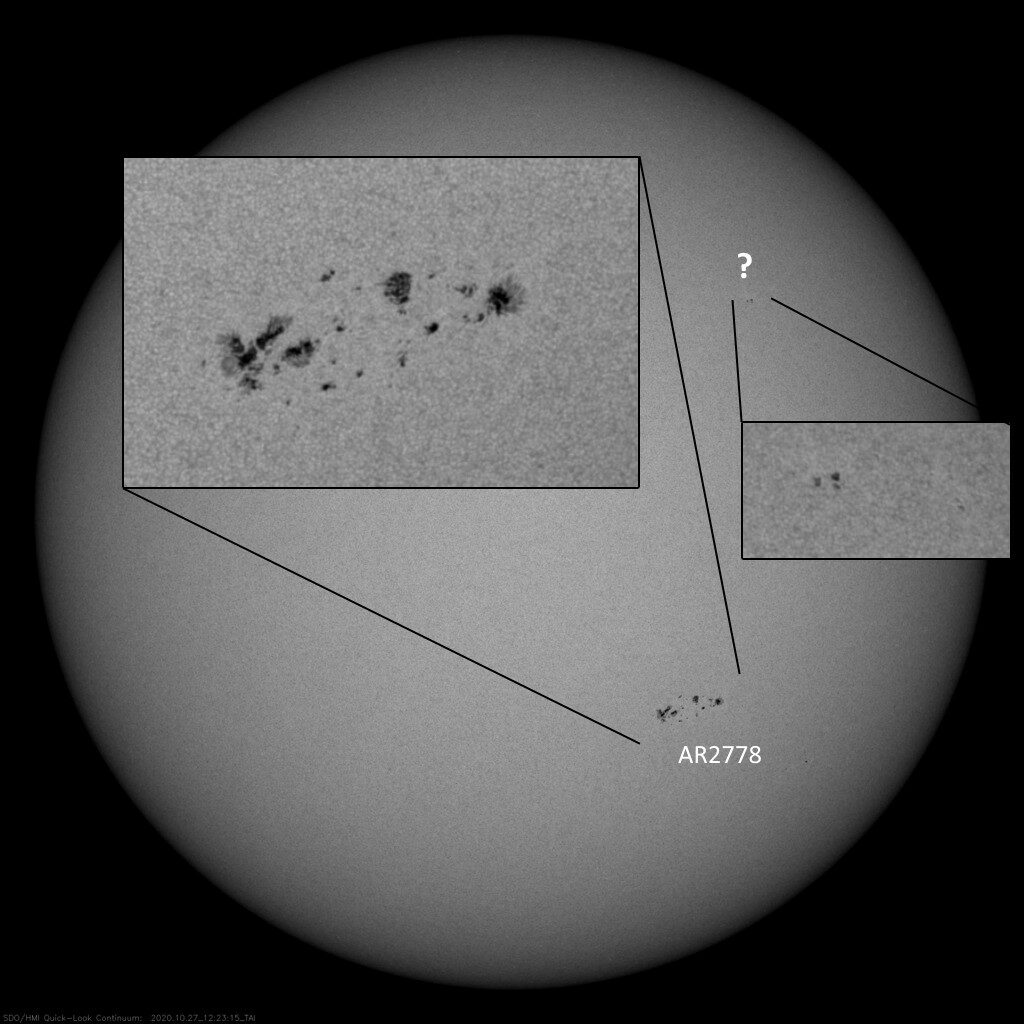 Prominences everywhere! Keep you eye on the middle of the Sun’s northern hemisphere during the last second of the video below! 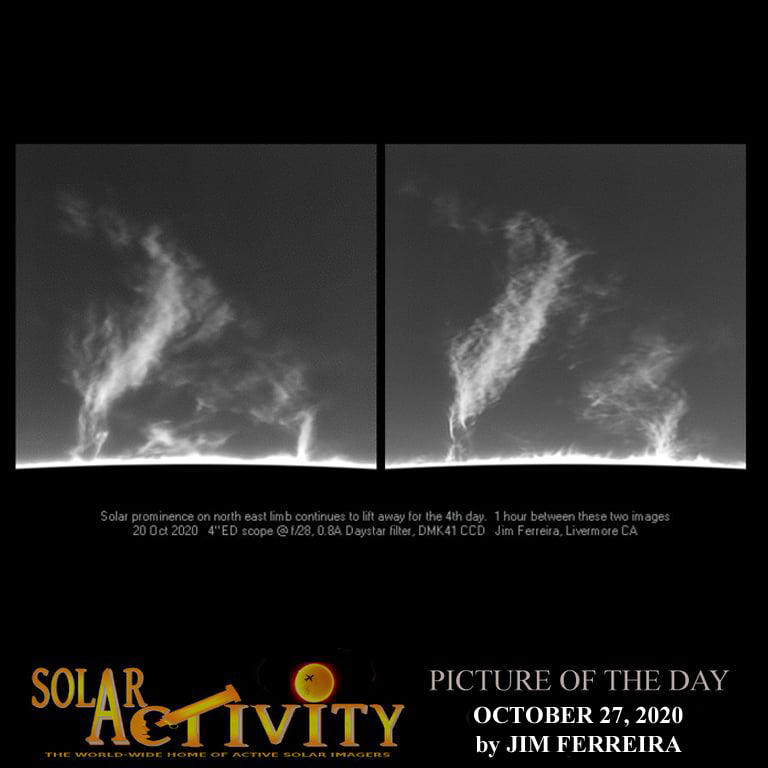 The SOLARACTIVITY PICTURE OF THE DAY for October 27th, 2020 is this awesome prominence lifting off by Jim Ferreira from California using a Daystar filter.

Our STEREO mission launched 14 years ago today! STEREO provides valuable data on the Sun, its atmosphere, and the inner solar system. Earlier this year, STEREO captured these views of comet ATLAS as it swooped by the Sun. https://t.co/UdrmLJJvbh pic.twitter.com/7WLXsxtyvT

As you get into the sinister spirit for #Halloween, look to the cosmos for creepy celestial displays. ?✨ In 2014, active regions on the Sun traced out an eerie jack-o’-lantern’s face, seen in ultraviolet light by our Sun-watching satellite. https://t.co/uI9DCMr3RQ pic.twitter.com/CZDb0hdzwL 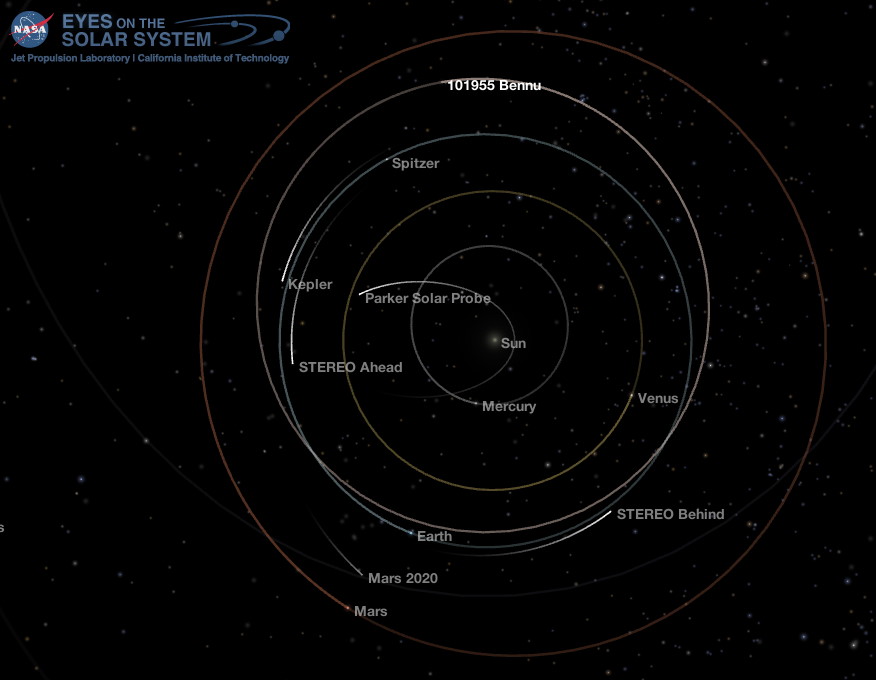 Position of the planets and a couple spacecraft in the inner solar system, 2020-10-27. Credit: NASA Eyes on the Solar System / Bob Trembley. 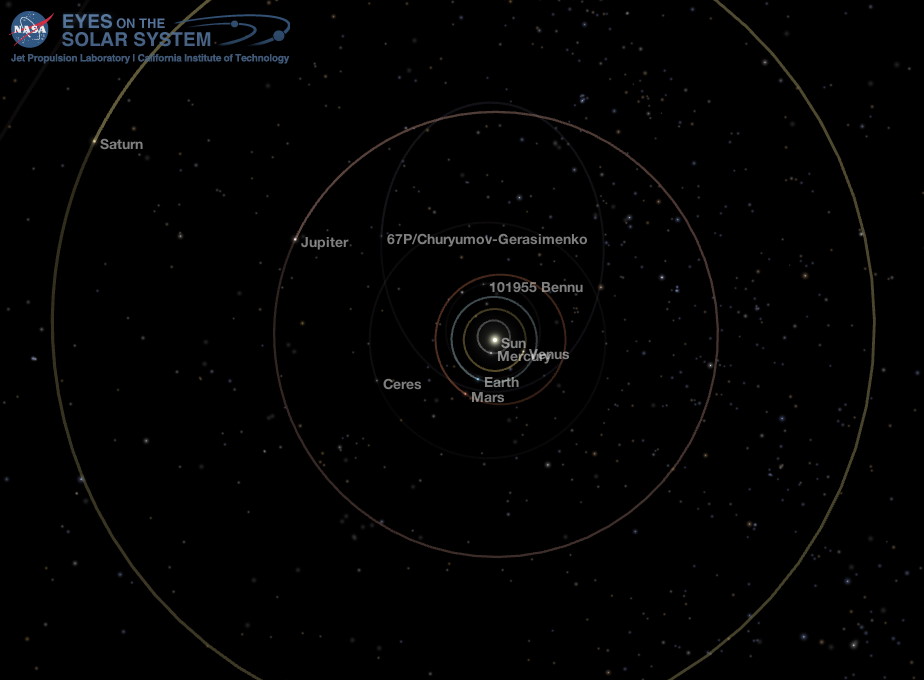 Position of the planets in the middle solar system, 2020-10-27. Credit: NASA Eyes on the Solar System / Bob Trembley. 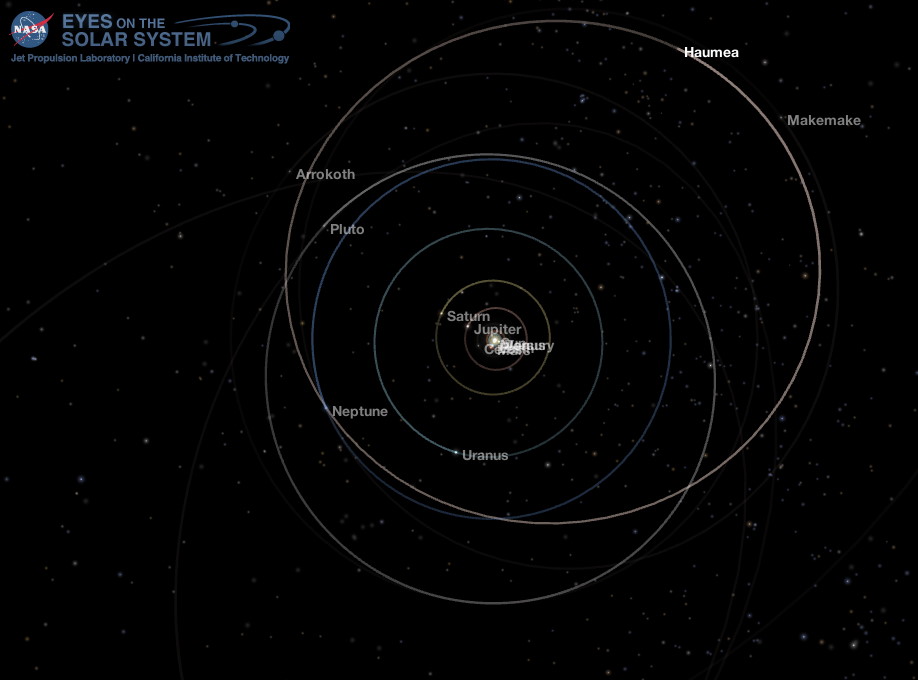 Position of the planets and some transneptunian objects in the outer solar system, 2020-10-27 – the orbit of TNO Haumea is highlighted. Credit: NASA Eyes on the Solar System / Bob Trembley.

Soooooo, about that whole "phosphine in the atmosphere of Venus" thing.https://t.co/o4JJsJ75RW

Tomorrow, the OSIRIS-REx mission will begin the process to stow its abundant sample of asteroid Bennu. It’s a few days earlier than originally anticipated, but the team is working hard to make sure we get every bit of Bennu we possibly can. More details: https://t.co/b7Wnoz219q pic.twitter.com/PXIlkZhnzi

For 20 years, astronauts have been snapping photos of Earth from the @Space_Station. Astronauts are trained for the job of collecting images for this scientific dataset, now more than 3 million pictures strong. #SpaceStation20th pic.twitter.com/8fzqgLAo8H

Calling all Kerbonauts! We’re partnering with @NASA to celebrate 20 years of human presence on the @Space_Station. What would 20 years of Kerbal presence look like? Read the thread for details. ⬇️ #SpaceStation20th pic.twitter.com/KoTeGVp5vQ

After Chandrayaan-1, the next evidence for water on the moon came from @LRO_NASA in 2013, confirming the existence of hydrogen-rich areas near the Moon's south pole and strongly suggesting the presence of water! pic.twitter.com/mdnxIK9ZLi

Climate: View the Earth as your Mother, not as a trash can.

"We are interdependent on each other, as well as on our Mother Earth." — His Holiness Pope Francis (@Pontifex) https://t.co/W33P8D2qWk

Our new Galaxy of Horrors posters are here, just in time for #Halloween! Download them now … if you dare: https://t.co/w7soVV982L #NASAHalloween pic.twitter.com/y6OVCROYbB

Have you registered for the 2020 Global Conference yet? Join us 11/13-14 for a global conversation about the cultural and environmental threat that #lightpollution poses to people worldwide. Advance registration is free but required to reserve your spot: https://t.co/Lwl8j4dwGO pic.twitter.com/U44uq6Ytb1

This #HubbleClassic features a cluster of stars called Hodge 301, at lower right, embedded in the Tarantula Nebula. Many of the cluster's stars have already exploded as supernovae, shocking gas in the nebula and creating the filaments in the upper left: https://t.co/ttgN82J5Tc pic.twitter.com/Ph6JqW6LSI

Continuing with my visual tour of nearby stars and their systems, we travel to the Ross 780 (Gliese 876) system, about 15 light years distant. 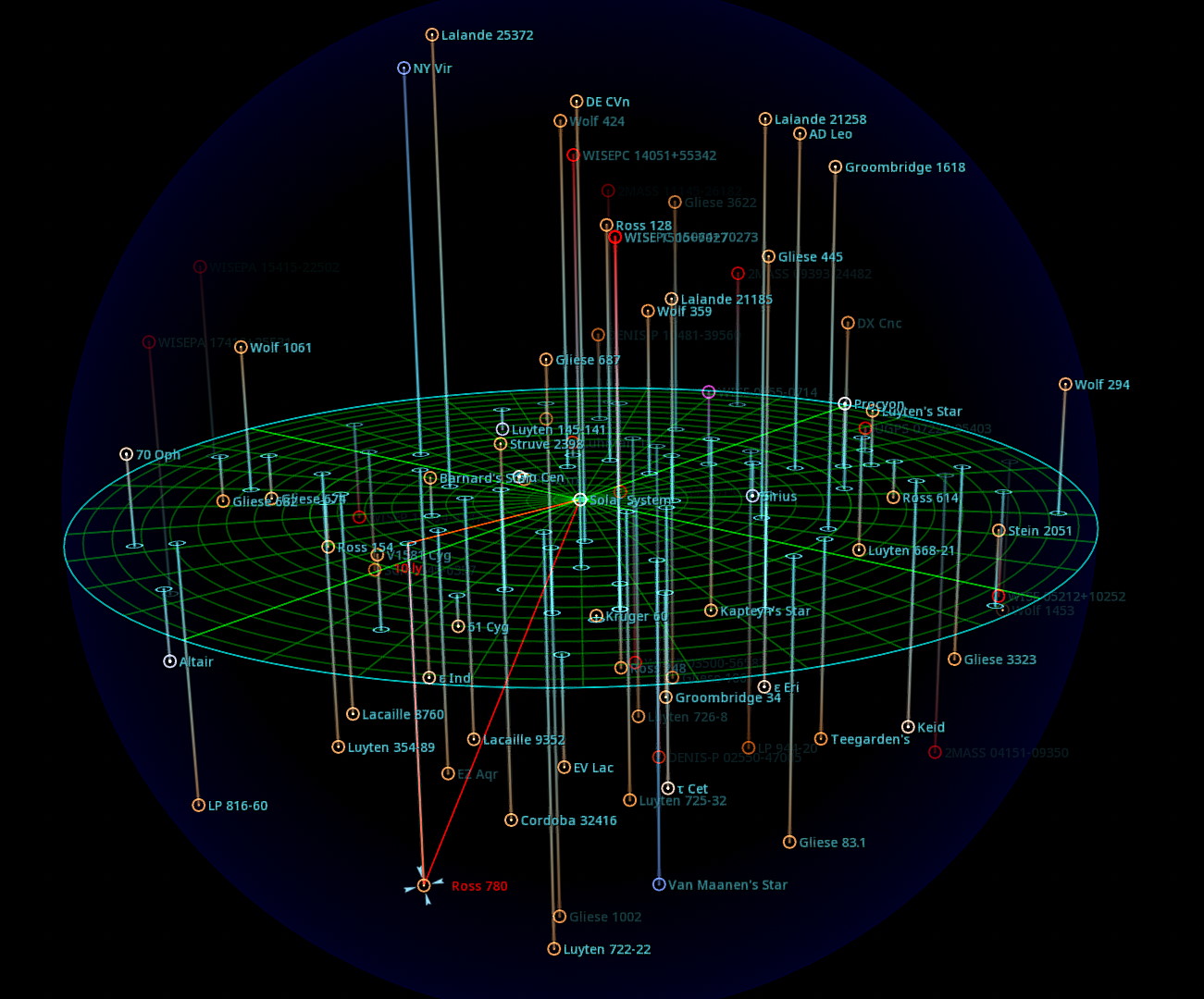 Gliese 1002 is about 15 light years from Sol; the plane (green) is aligned with the orientation of the plane of the Milky Way galaxy. Credit: SpaceEngine / Bob Trembley.

Gliese 876 is a red dwarf approximately 15 light-years away from Earth in the constellation of Aquarius. It is one of the closest known stars to the Sun confirmed to possess a planetary system with more than two planets, after Gliese 1061, YZ Ceti, Tau Ceti, and Luyten’s Star; as of 2018, four extrasolar planets have been found to orbit the star. The planetary system is also notable for the orbital properties of its planets. It is the only known system of orbital companions to exhibit a near-triple conjunction in the rare phenomenon of Laplace resonance (a type of resonance first noted in Jupiter‘s inner three Galilean moons). It is also the first extrasolar system around a normal star with measured coplanarity. While planets b and c are located in the system’s habitable zone, they are giant planets believed to be analogous to Jupiter.

On June 23, 1998, an extrasolar planet was announced in orbit around Gliese 876 by two independent teams led by Geoffrey Marcy and Xavier Delfosse. The planet was designated Gliese 876 b and was detected by Doppler spectroscopy. Based on luminosity measurement, the circumstellar habitable zone (CHZ) is believed to be located between 0.116 and 0.227 AU. On January 9, 2001, a second planet designated Gliese 876 c was detected, inside the orbit of the previously-discovered planet. The relationship between the orbital periods initially disguised the planet’s radial velocity signature as an increased orbital eccentricity of the outer planet. Eugenio Rivera and Jack Lissauer found that the two planets undergo strong gravitational interactions as they orbit the star, causing the orbital elements to change rapidly. On June 13, 2005, further observations by a team led by Rivera revealed a third planet, designated Gliese 876 d inside the orbits of the two Jupiter-size planets. In January 2009, the mutual inclination between planets b and c was determined using a combination of radial velocity and astrometric measurements. The planets were found to be almost coplanar, with an angle of only 5.0+3.9
−2.3° between their orbital planes.

On June 23, 2010, astronomers announced a fourth planet, designated Gliese 876 e. This discovery better constrained the mass and orbital properties of the other three planets, including the high eccentricity of the innermost planet. This also filled out the system inside e’s orbit; additional planets there would be unstable at this system’s age. In 2014, reanalysis of the existing radial velocities showed the possible presence of two additional planets. These planets would have almost the same mass as Gliese 876d. In 2018 a study using hundreds of new radial velocity measurements found no evidence for these planets. If this system has a comet disc, it is undetectable “brighter than the fractional dust luminosity 10−5” of a recent Herschel study. None of these planets transit the star from the perspective of Earth, making it difficult to study their properties.

GJ 876 is a candidate parent system for the ʻOumuamua object. The trajectory of this interstellar object took it near the star about 820,000 years ago with a velocity of 5 km/s, after which it has been perturbed by six other stars.  – Wikipedia 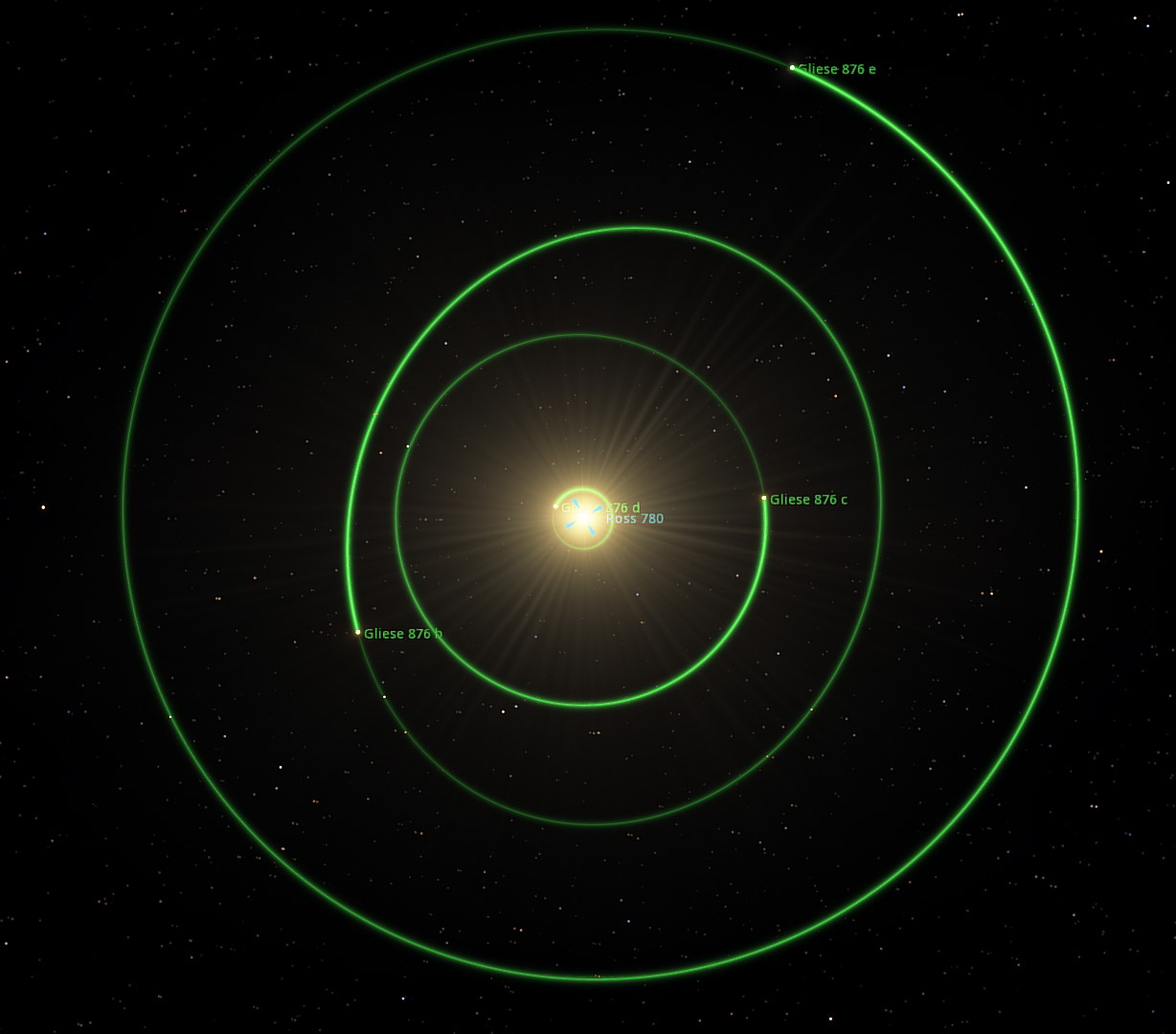 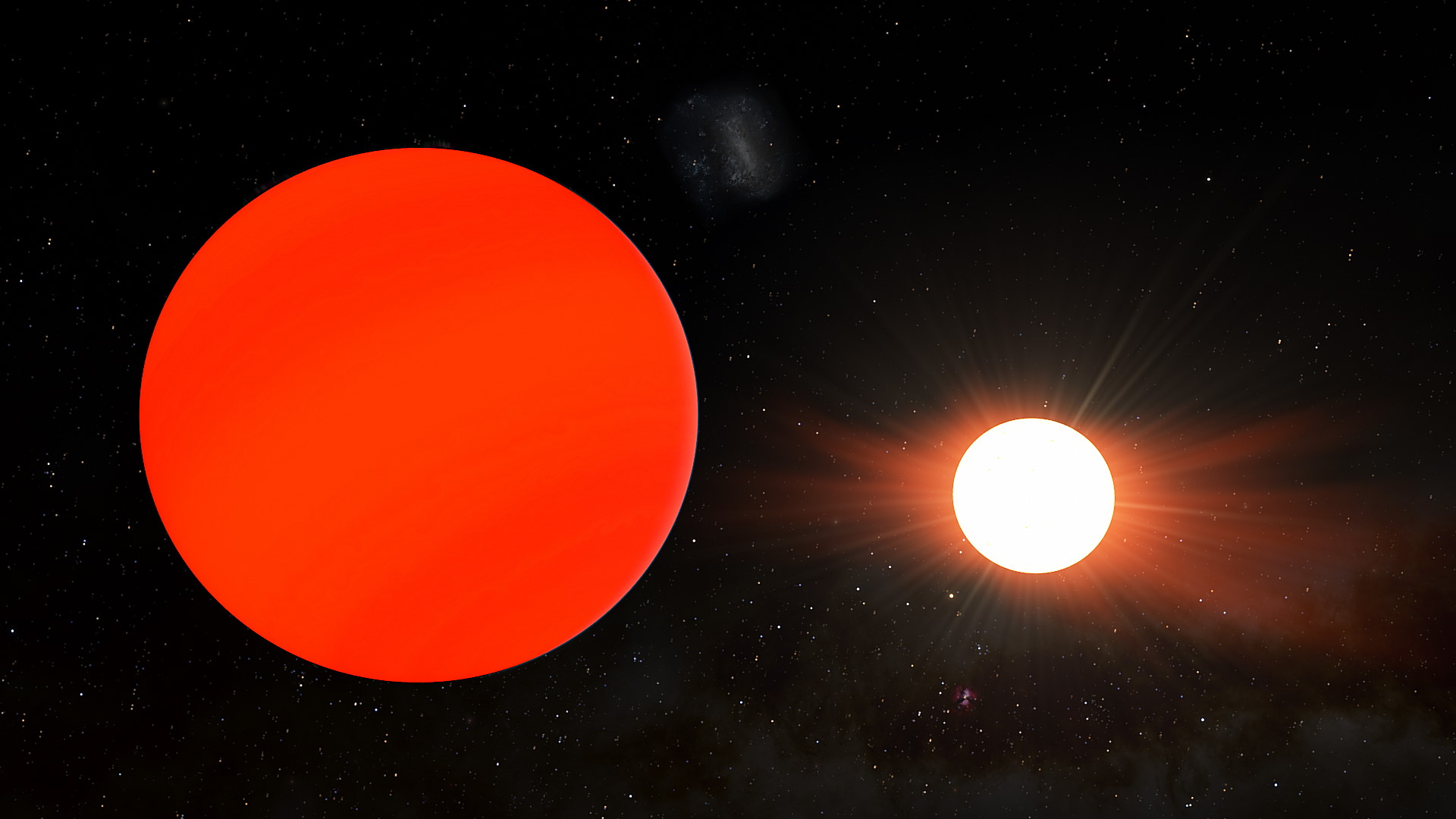 Captured on Oct. 22, this series of three images shows that the Touch-and-Go Sample Acquisition Mechanism (TAGSAM) sampling head on NASA’s OSIRIS-REx spacecraft is full of rocks and dust collected from asteroid Bennu, as well as the fact that some of these particles are escaping the sampler head. Analysis by the OSIRIS-REx team suggests that bits of material are passing through small gaps where the head’s mylar flap is slightly wedged open. The mylar flap (the black bulge visible in the 9 o’clock position inside the ring) is designed to keep the collected material locked inside, and these unsealed areas appear to be caused by larger rocks that didn’t fully pass through the flap. Based on available imagery, the team suspects there is plentiful sample inside the head, and is on a path to stow the sample as quickly as possible. The images were taken by the spacecraft’s SamCam camera as part of the sample verification procedure following the spacecraft’s Oct. 20 sample collection attempt. The TAGSAM system was developed by Lockheed Martin Space to acquire a sample of asteroid material in a low-gravity environment. Credit: NASA/Goddard/University of Arizona