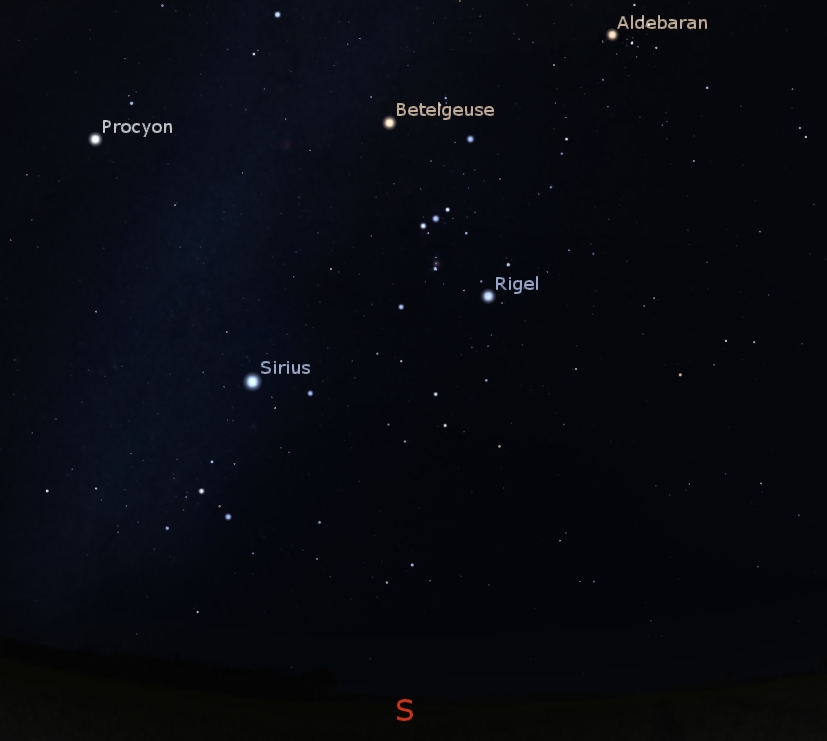 The constellations Orion and Canis Major have migrated from the east to the south, and now appear high in the southern predawn sky.

The constellation Leo with the bright star Regulus rise in the eastern predawn sky. 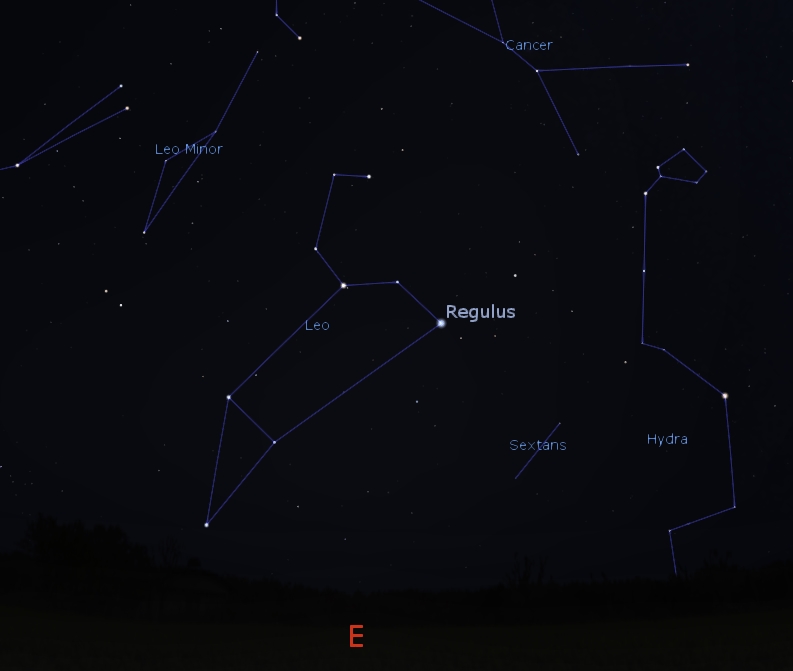 The bright star Regulus in the constellation Leo in the eastern predawn sky.

Ursa Major (with the Big Dipper asterism) and Ursa Minor (the Little Dipper) appear in the northern predawn sky. 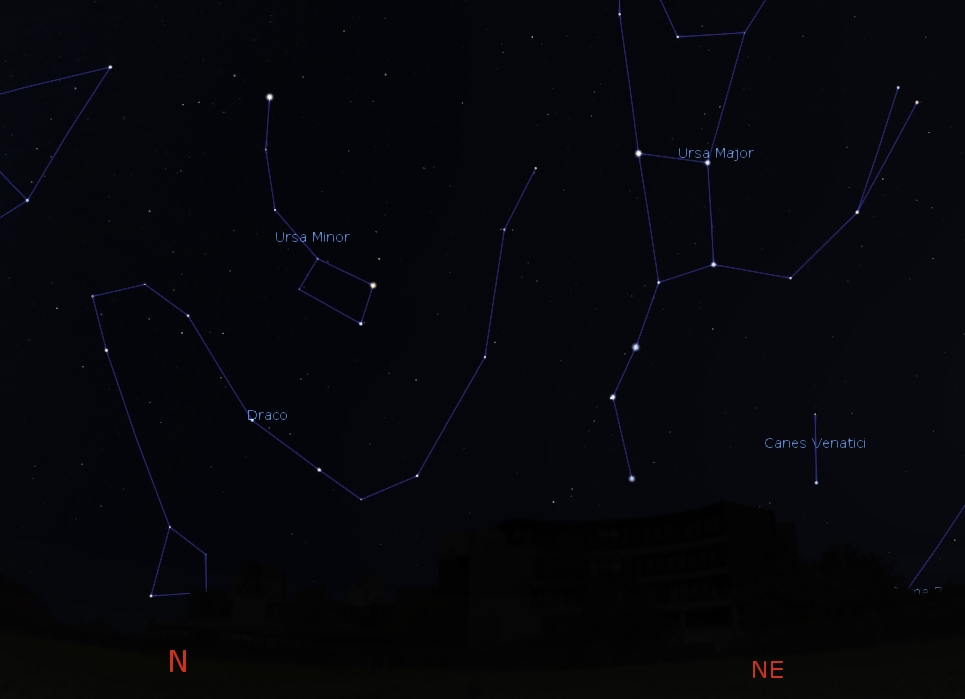 Mars and Saturn continue to be excellent viewing targets in the southern sky after sunset – this week the Moon will not be present to wash them out. 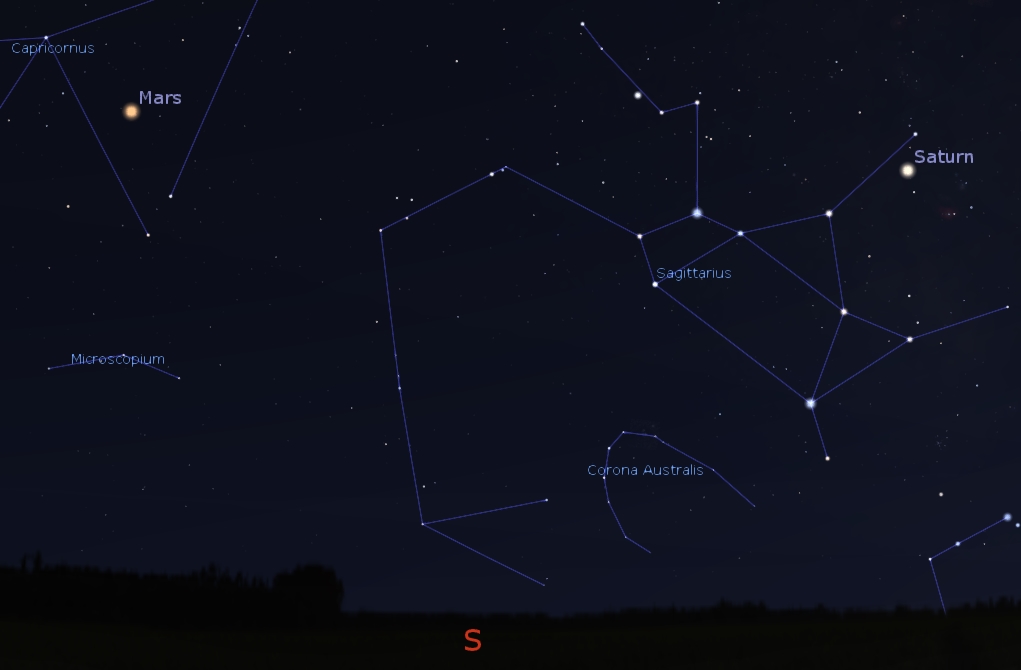 Mars and Saturn in the southern sky after sunset on Oct. 9, 2018. Credit: Stellarium / Bob Trembley.

Jupiter appears in the southwestern sky at dusk, and sets at 8:36 PM. 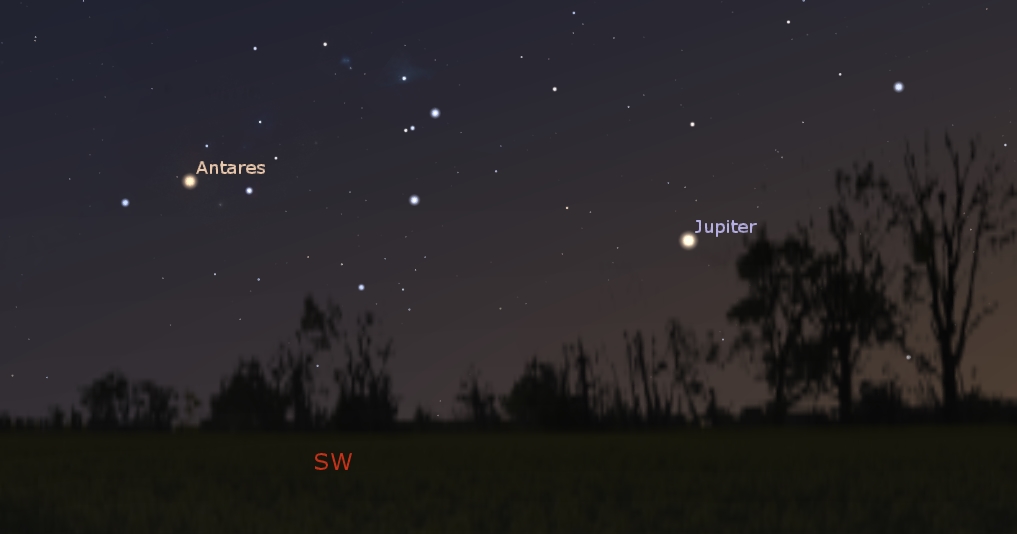 Mizar and Alcor are a naked-eye double star in the handle of the “Big Dipper” (in Ursa Major). 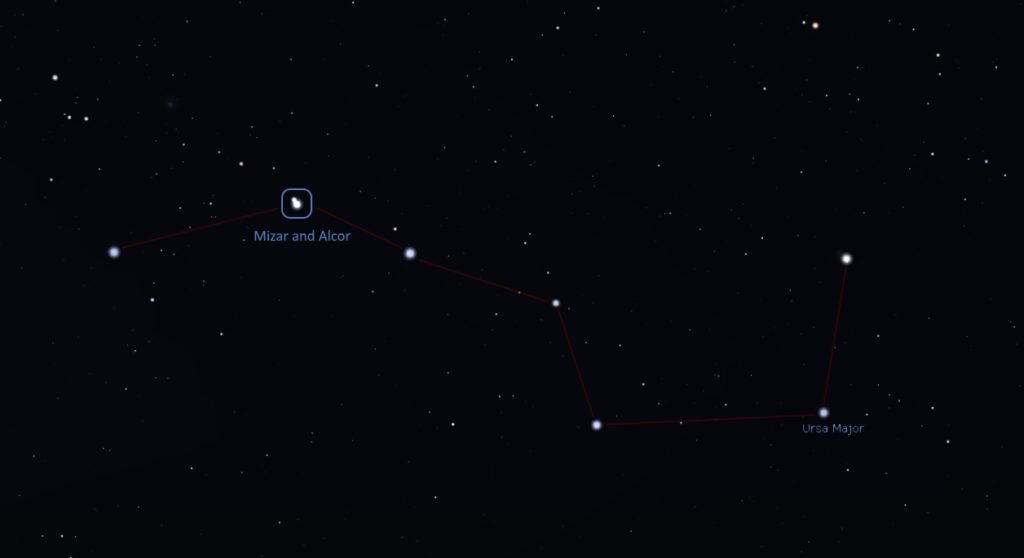 In a small telescope, Mizar and Alcor can easily be “split” or resolved into individual stars: 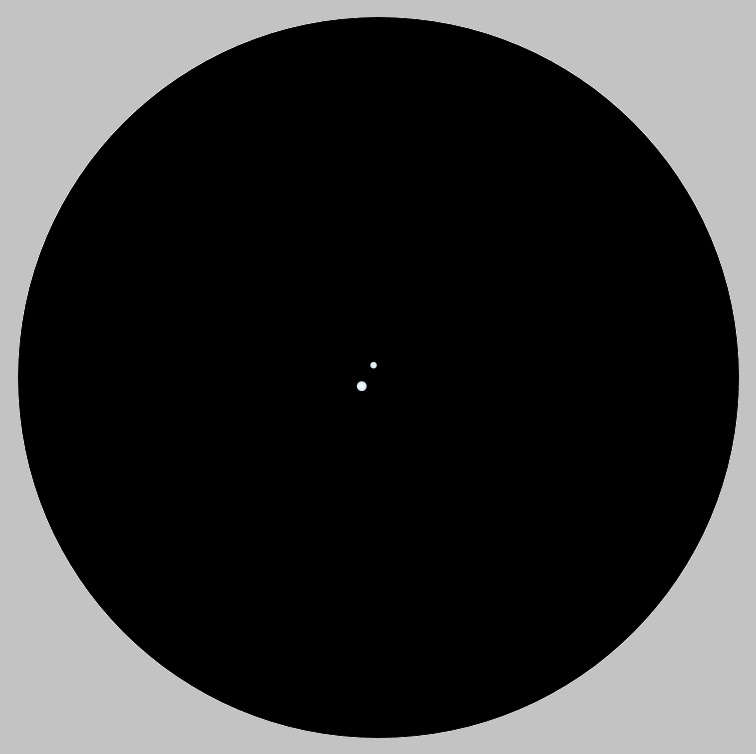 Mizar and Alcor, drawn by Galileo.

Mizar is actually quadruple star system, with two sets of double stars orbiting around their common center of gravity – also known as their barycenter. 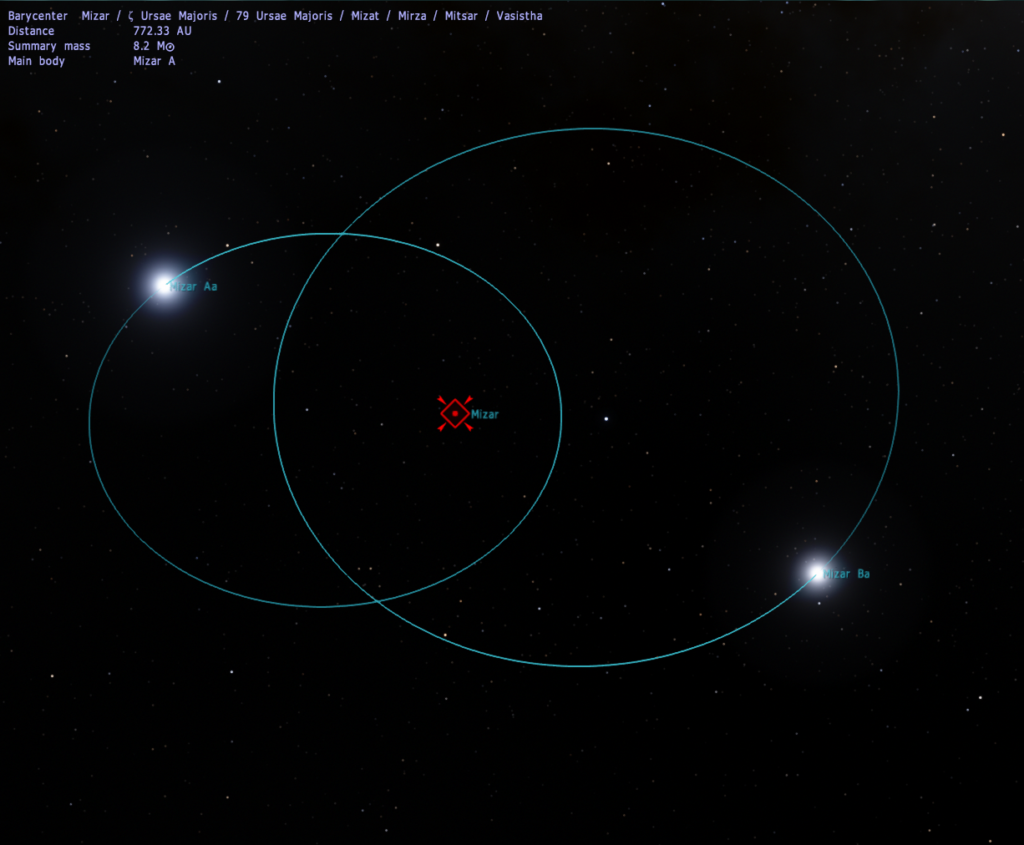 The two stars of Mizar Aa are similar – each over twice the mass of the Sun, and each hotter than our Sun. 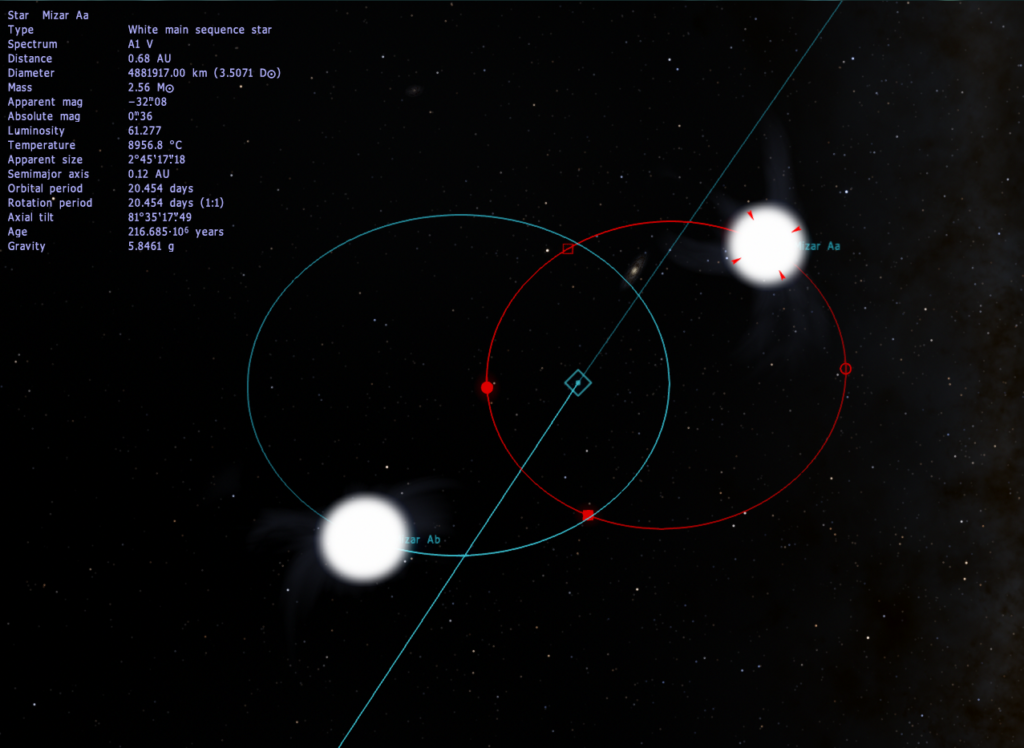 The two stars of Mizar Ba are also similar – each massing about 1.5 times our Sun, and both are hotter than our Sun. 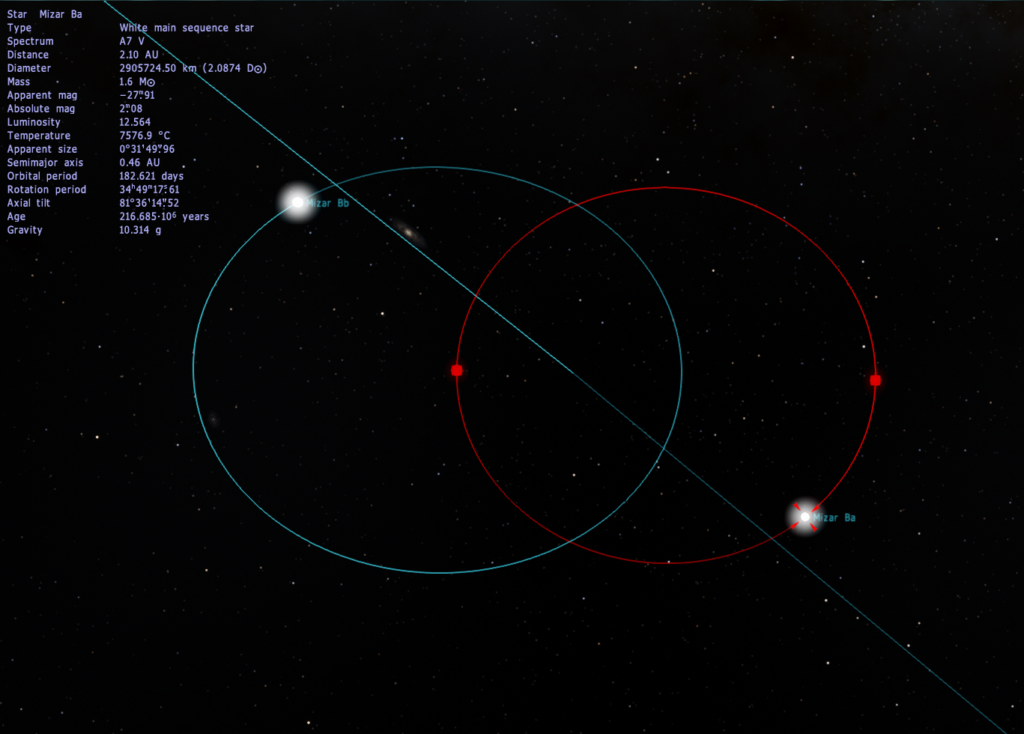 Alcor is itself a double star, with a much smaller and dimmer star orbiting a more massive companion. 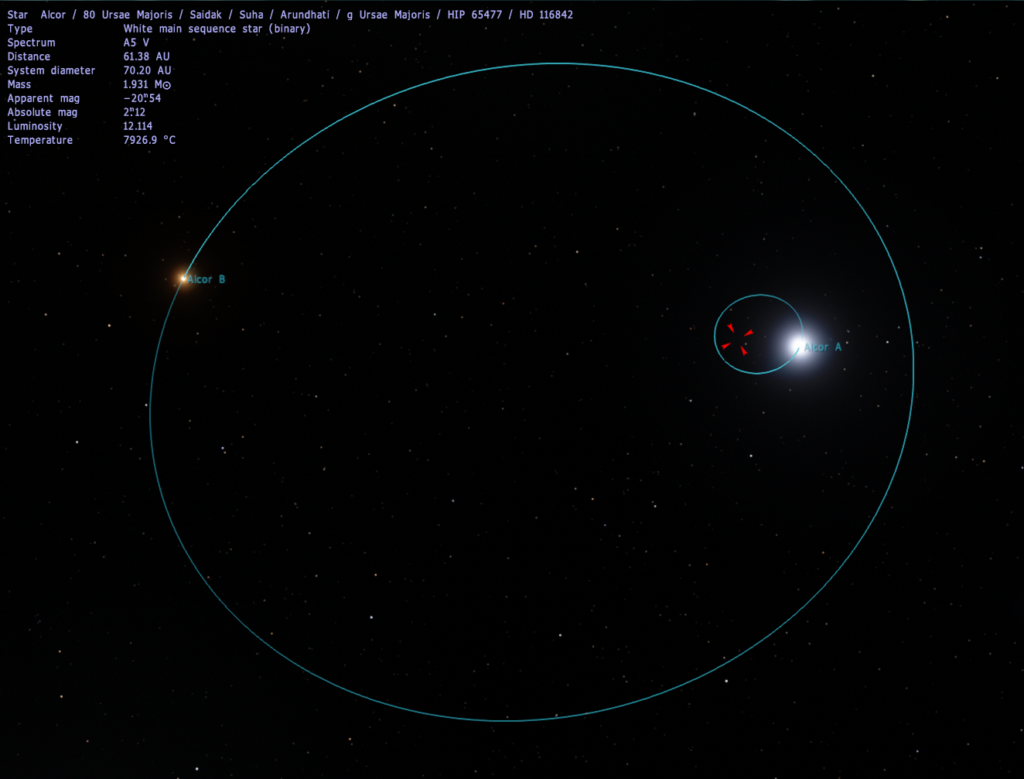 Mizar and Alcor’s proper motions show that they move together, but it unknown if the two star-systems are gravitationally bound.

The Moon is new, and in a couple days will appear as a waxing crescent on southwestern horizon at dusk.

The Sun is once again spot-free; it’s been 4 days since a sunspot has been seen; there’s a small region of coronal loop activity along the equator, but it’s not strong enough to form a spot. The large coronal hole at the Sun’s north pole has remained for several weeks now; two other coronal near the horizon have solar wind streaming out them..

SpaceWeather.com says: “For the 3rd day in a row, Earth remains inside a stream of high-speed solar wind flowing from a canyon-shaped hole in the sun’s atmosphere. NOAA forecasters say there is a 40% chance of minor G1-class geomagnetic storms on Oct. 9th as our planet’s magnetic field is buffeted by the gaseous material. Arctic sky watchers should remain alert for auroras.”

There have been some impressive prominences on the Sun’s limb in the last couple days! 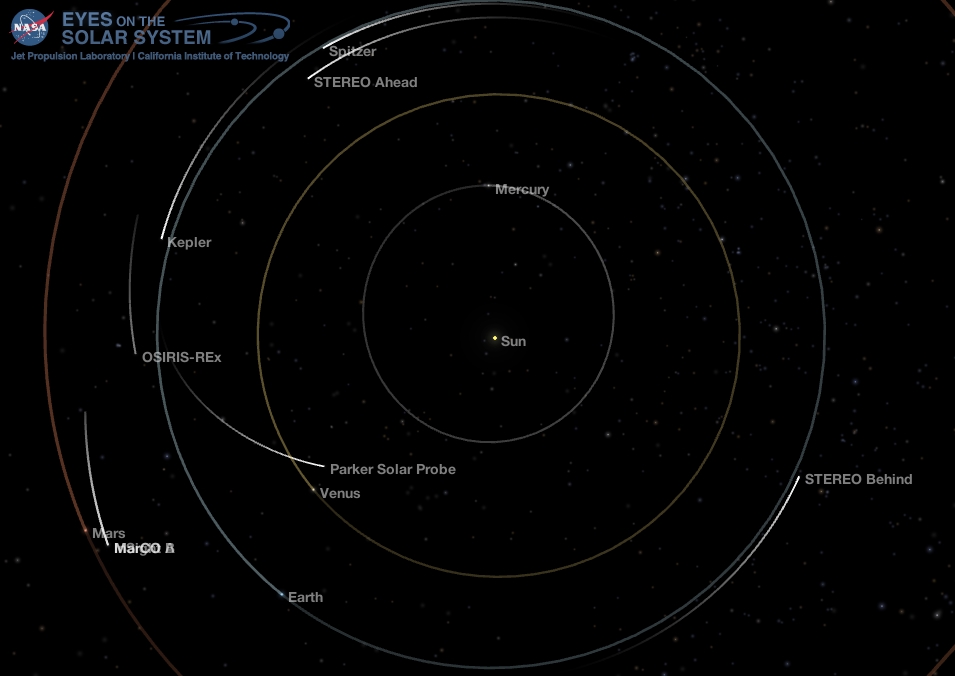 Position of the planets and several spacecraft in the inner solar system, Oct. 9, 2018. Credit: NASA Eyes on the Solar System / Bob Trembley. 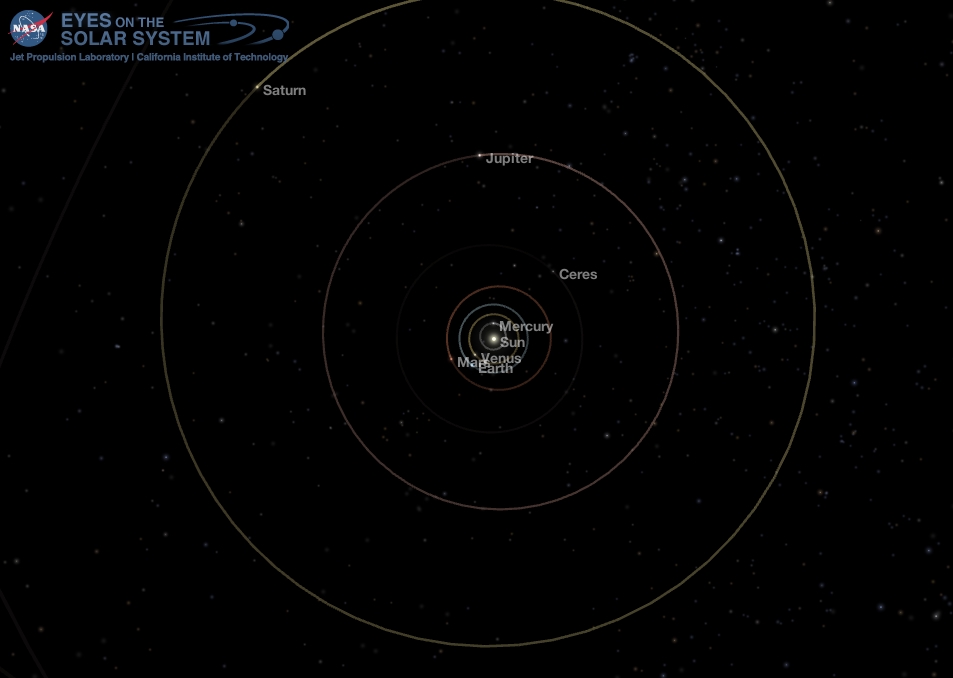 Position of the planets in the middle solar system, Oct. 9, 2018. Credit: NASA Eyes on the Solar System / Bob Trembley. 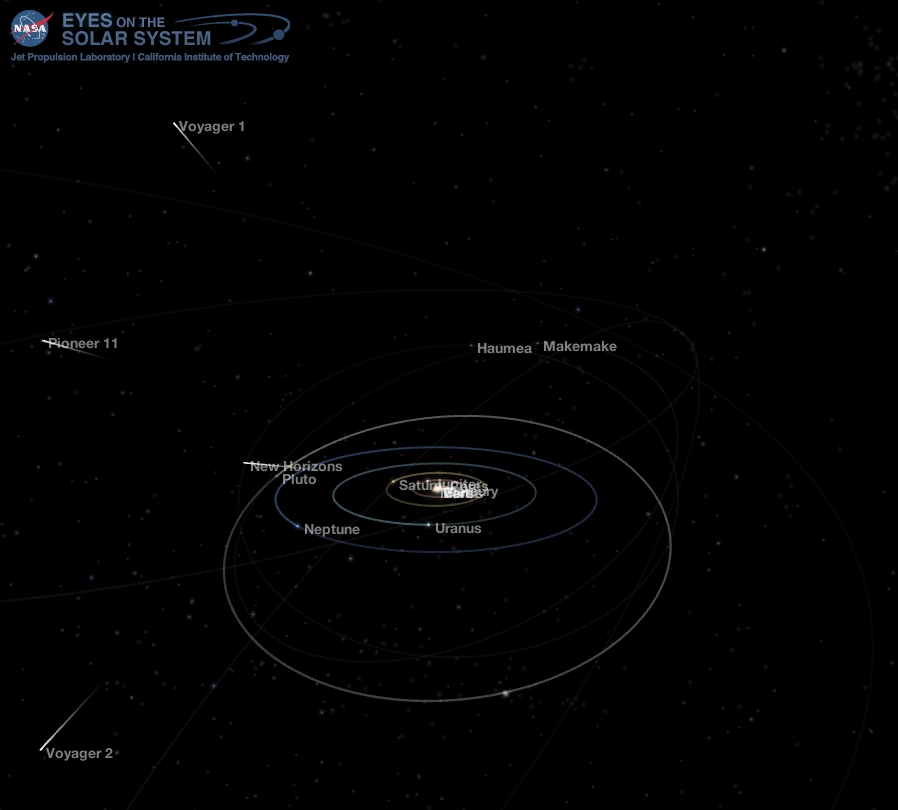 The Hubble team is working to resume science after Hubble entered safe mode due to 1 of 3 gyros failing. Analysis and testing on the backup gyro are ongoing to determine why it is not performing as expected. For more info: https://t.co/T72X4pjLPI

Carry on, my wayward twin. Voyager 2 is seeing an uptick in cosmic rays as I did on my way to interstellar space: https://t.co/NYHHNDWnND pic.twitter.com/SEQ1taWHph

The Voyager Tour in NASA Eyes on the Solar System allows you to turn on the Sun’s heliosphere – it’s pretty cool to be able to visualize the Sun’s magnetic environment this way. 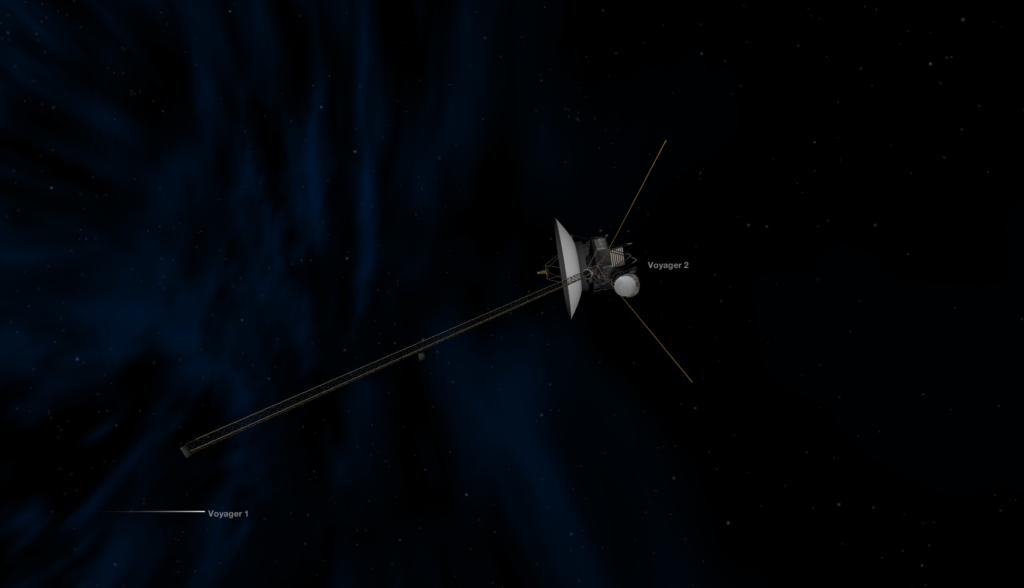 Voyager 2 at the Heliopause. Credit: NASA Eyes on the Solar System / Bob Trembley. 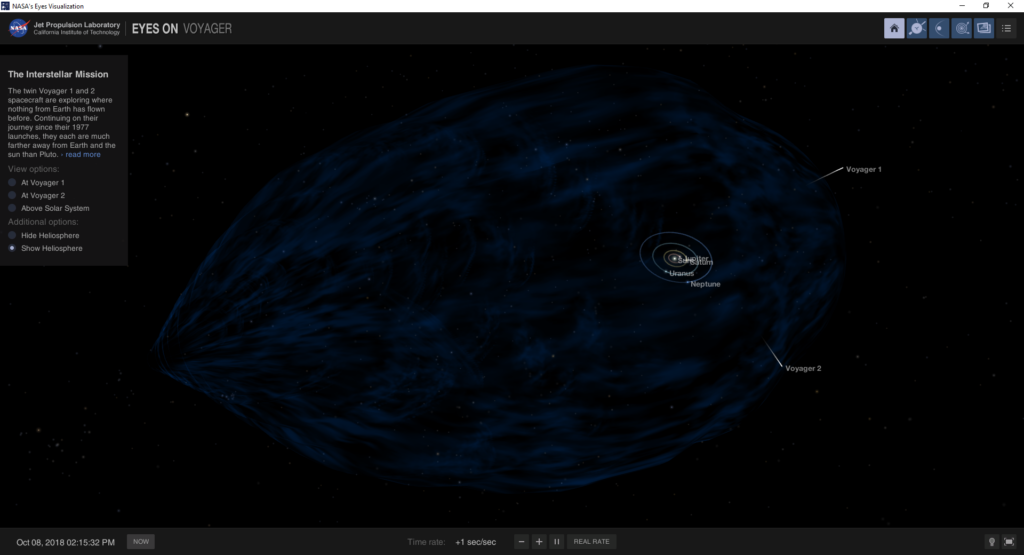 Voyagers 1 & 2 and the Heliotail. Credit: NASA Eyes on the Solar System / Bob Trembley.

Since its United Nations declaration in 1999, World Space Week has grown into the largest public space event on Earth. More than 3,700 events in 80 countries celebrated the benefits of space and excitement about space exploration in 2017.  The 2018 theme is “Space Unites The World” and 2019 theme “The Moon:  Gateway to the Stars.”