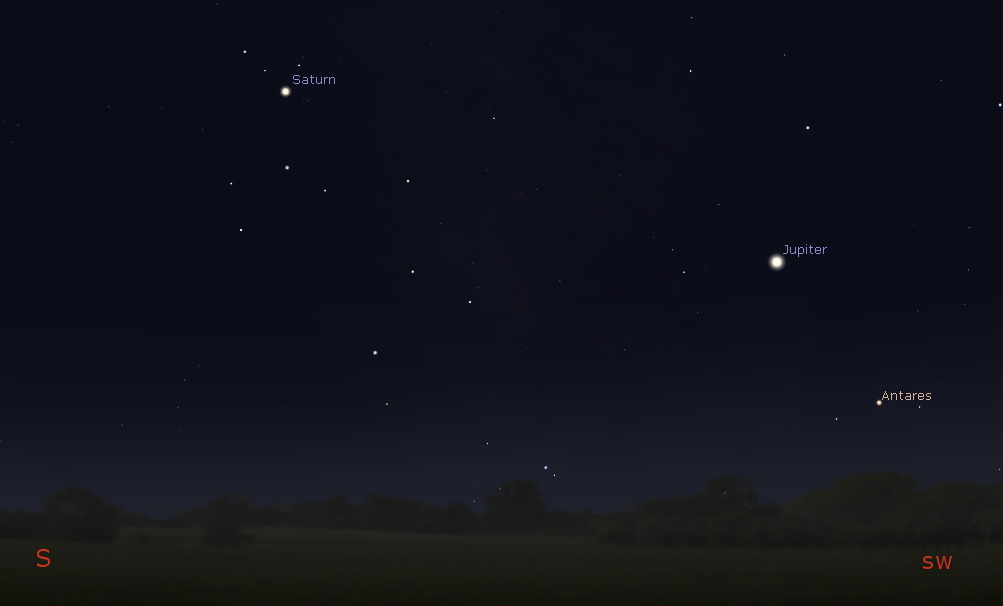 Saturn and Jupiter continue to make excellent observing targets after sunset all week.

Saturn, Jupiter and the star Antares in the south-southwestern sky at 9:00 PM this week. Credit: Stellarium / Bob Trembley.

A recent tweet from the Hubble Space Telescope shows Saturn’s rings in all their glory! I got a chance to see Saturn through a large telescope recently – the Cassini Division was clearly visible.

By midnight, Saturn is near to setting in the southwestern sky, and star Fomalhaut is high in the southern sky.

Saturn and the star Fomalhaut in the south-southwestern sky at midnight this week. Credit: Stellarium / Bob Trembley.

The constellation Orion is high in the southern sky before sunrise; I saw it this morning as my wife drove off to work – it’s impossible to miss above the roof of my house! 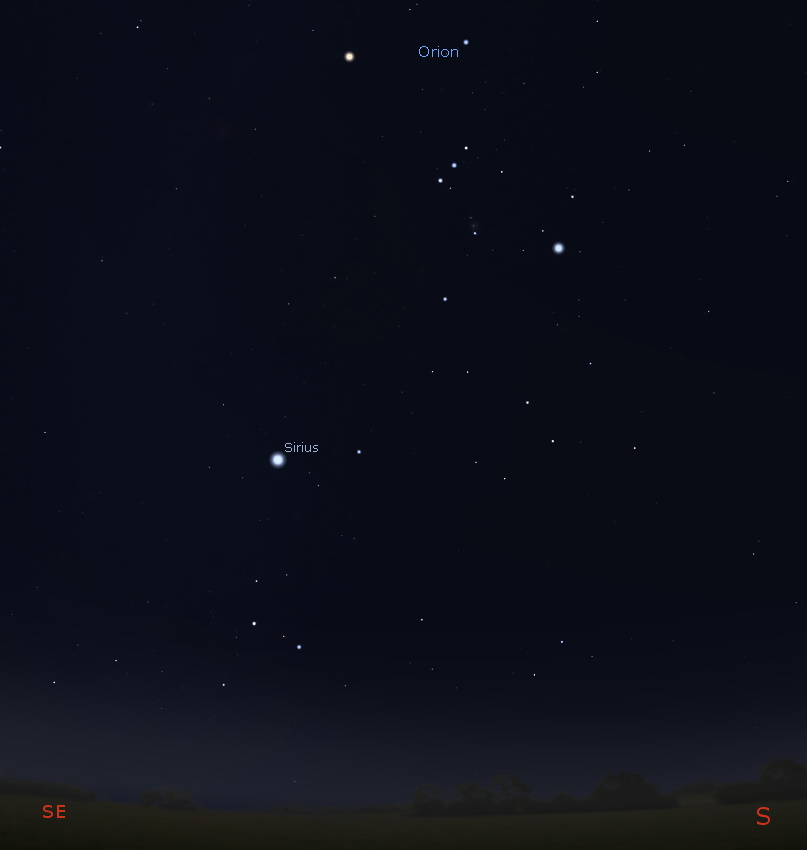 The constellation Orion is high in the southern sky before sunrise. Credit: Stellarium / Bob Trembley

The Moon will be between the stars Regulus and Algieba before sunrise on September 26th – if you’re up, be sure to look for earthshine! (Note: the Moon is shown magnified for better visualization.) 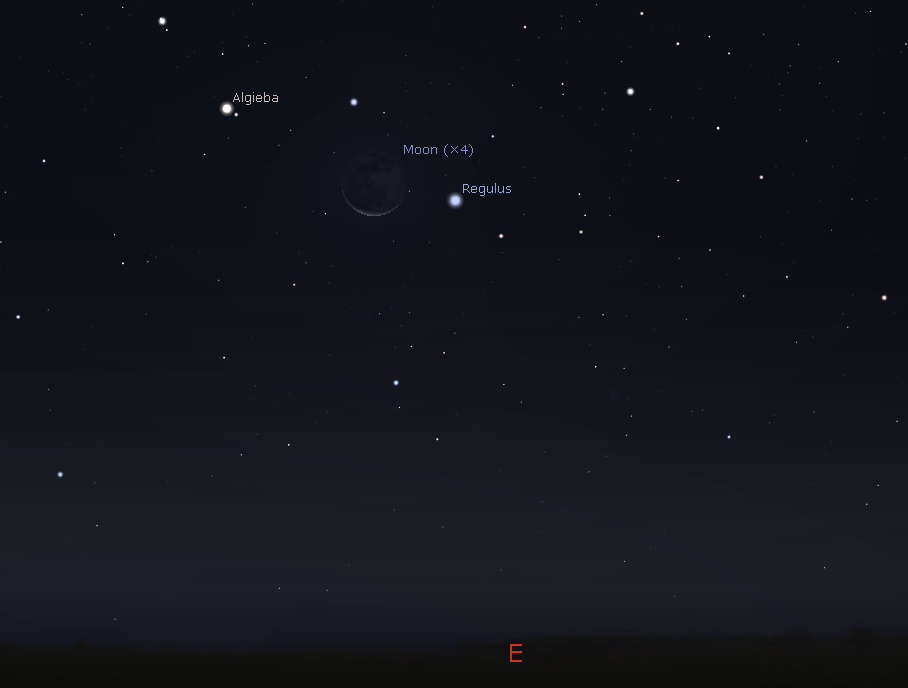 Ursa Major is a constellation in the northern sky, whose associated mythology likely dates back into prehistory. Its Latin name means “greater she-bear,” referring to and contrasting it with nearby Ursa Minor, the lesser bear. Wikipedia

My wife and I having our first meeting of our after-school club, the Endeavour Space Academy, this week. We’re going to concentrate on observing this year, and getting to know the night sky – I want students to be able to see and identify objects in the early evening sky (before it gets too late for them…); we’re starting with something everyone in the northern hemisphere has already seen, but may not have known they’ve seen: the constellation Ursa Major, and it’s right there to the north after sunset. 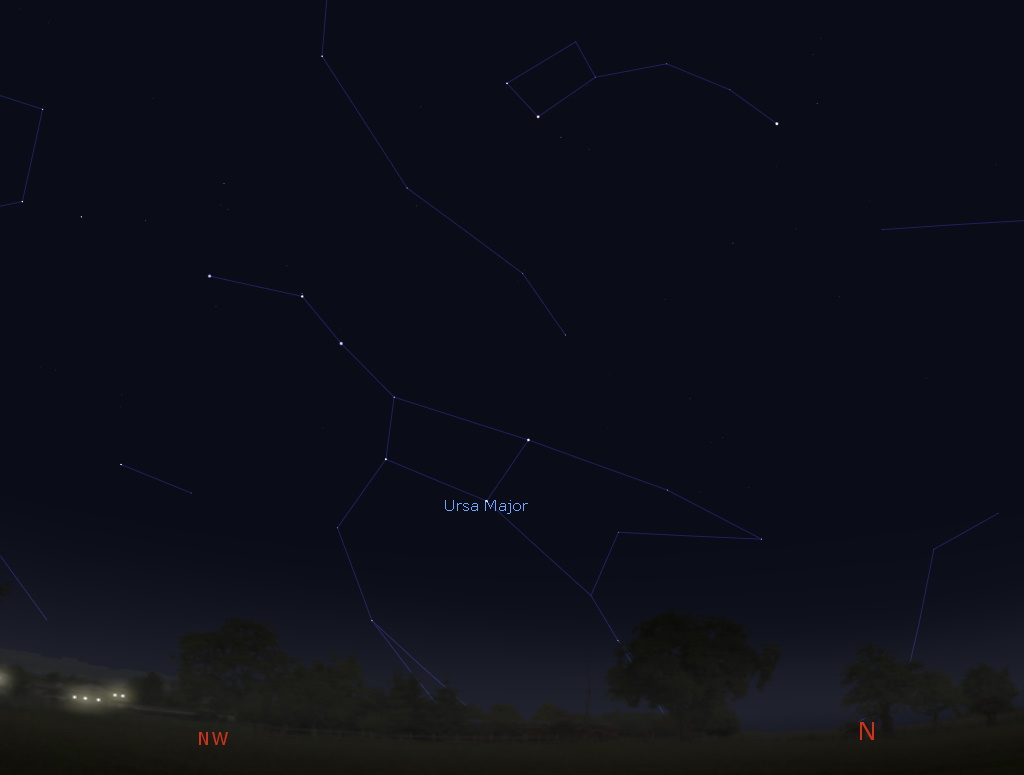 Most people will be familiar with “the Big Dipper” – which is an asterism – a pattern of stars that is not a constellation. The two farthest stars in Dipper’s bowl can be used as a “star-hopping” guide the the north star, Polaris; I actually found myself doing this very thing the other evening without thinking about it! 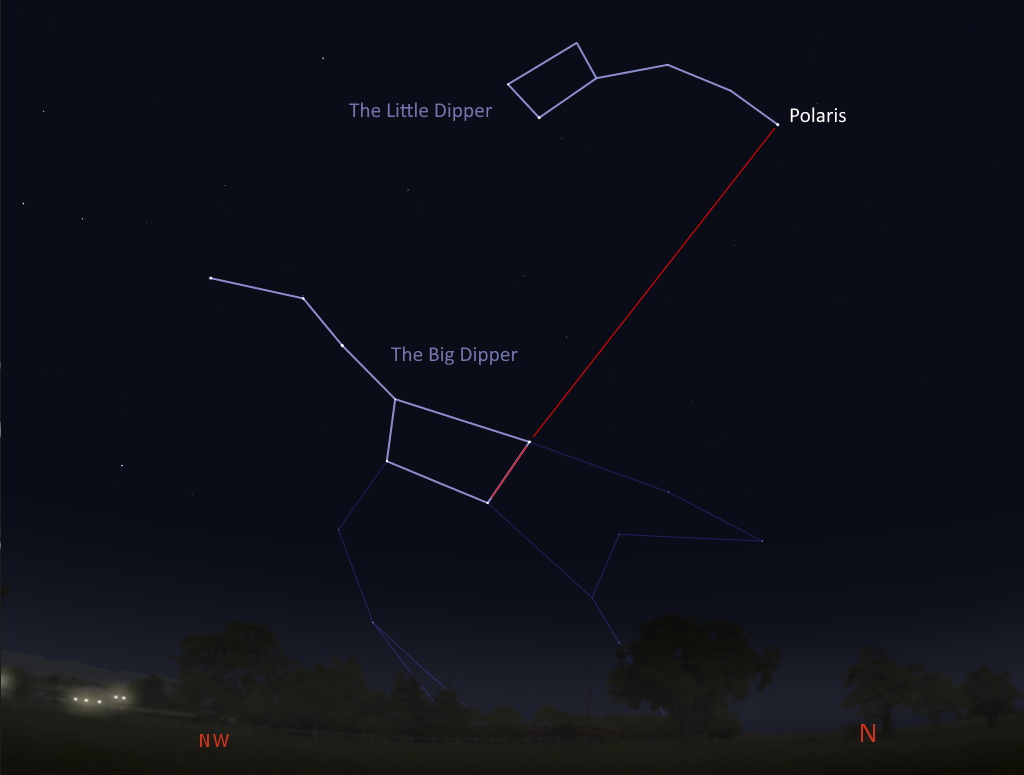 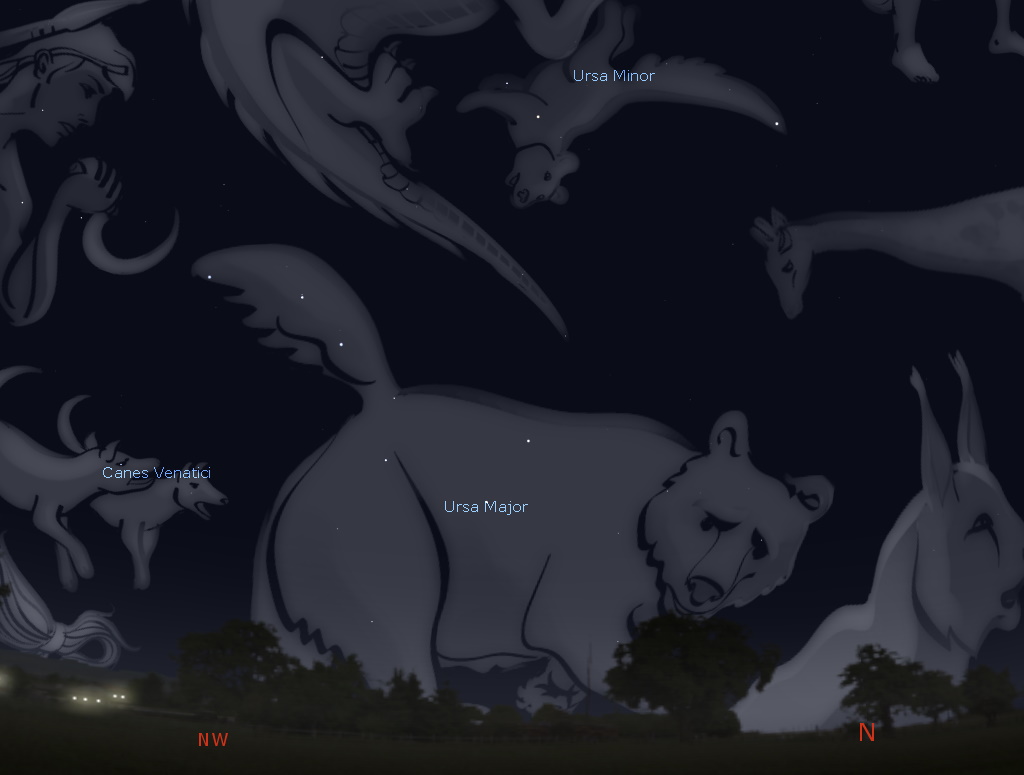 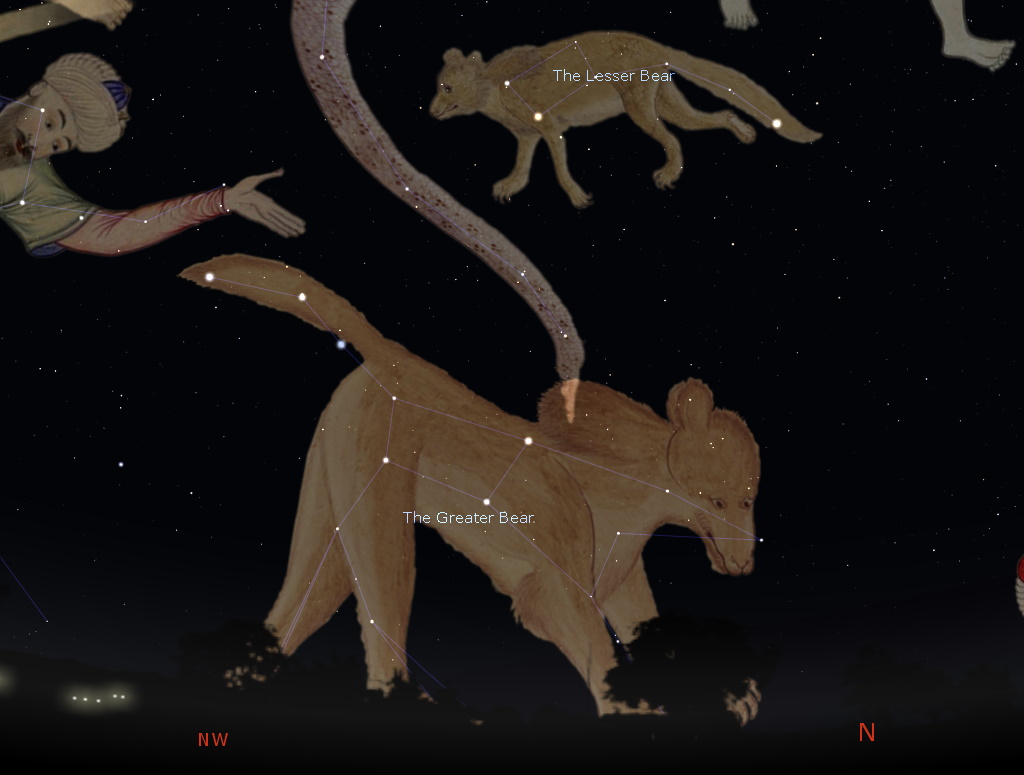 Ursa Major is host to numerous deep-sky objects (DSO); if I cranked up the number of visible DSO markers all the way up in Stellarium, this image would be filled with red and orange markers! 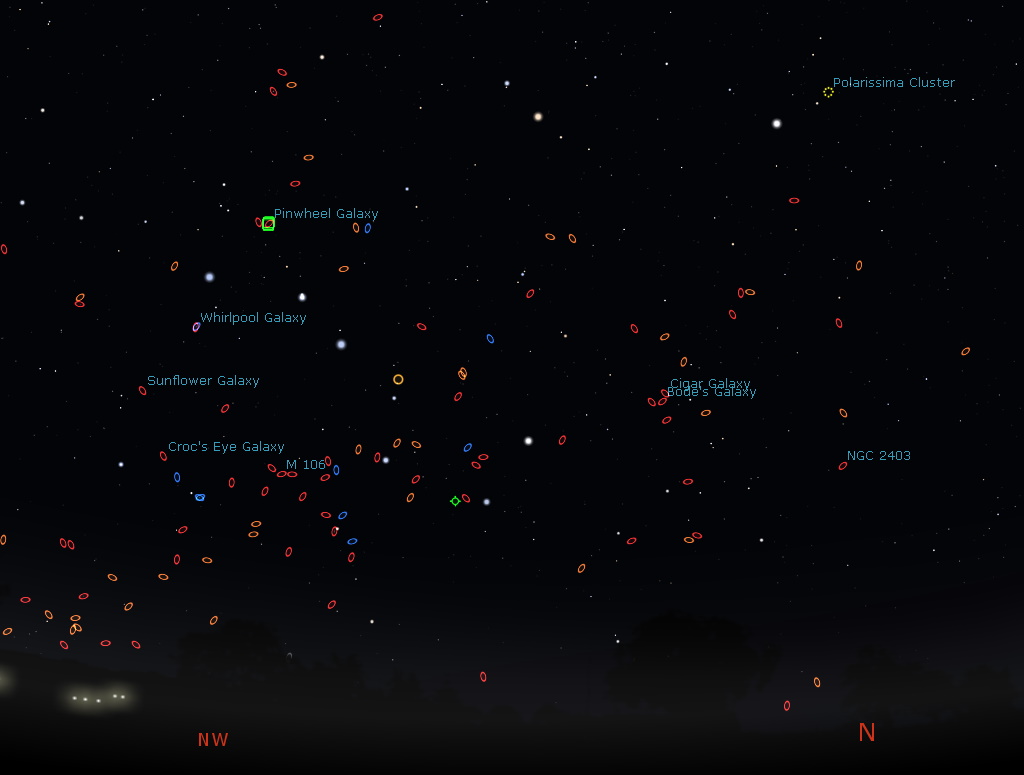 The human eye is really a pretty terrible tool for doing astronomy… it can not perceive infrared, so we’re missing out on seeing the clouds of gas and dust that our Sun is drifting through: 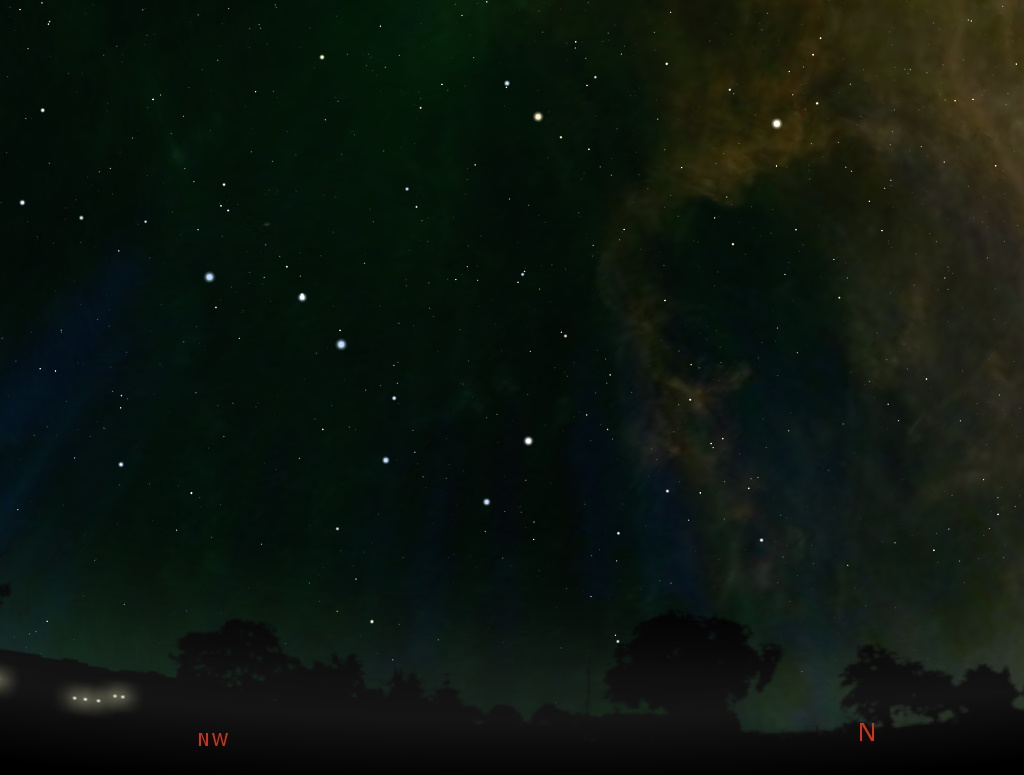 Sometimes I get asked “Why is the sky dark?” I respond with “It’s NOT! You just can’t see all the different light pouring down on you!” If you could see microwaves, the sky would be glowing in all directions from the Cosmic Microwave Background Radiation (CMB). 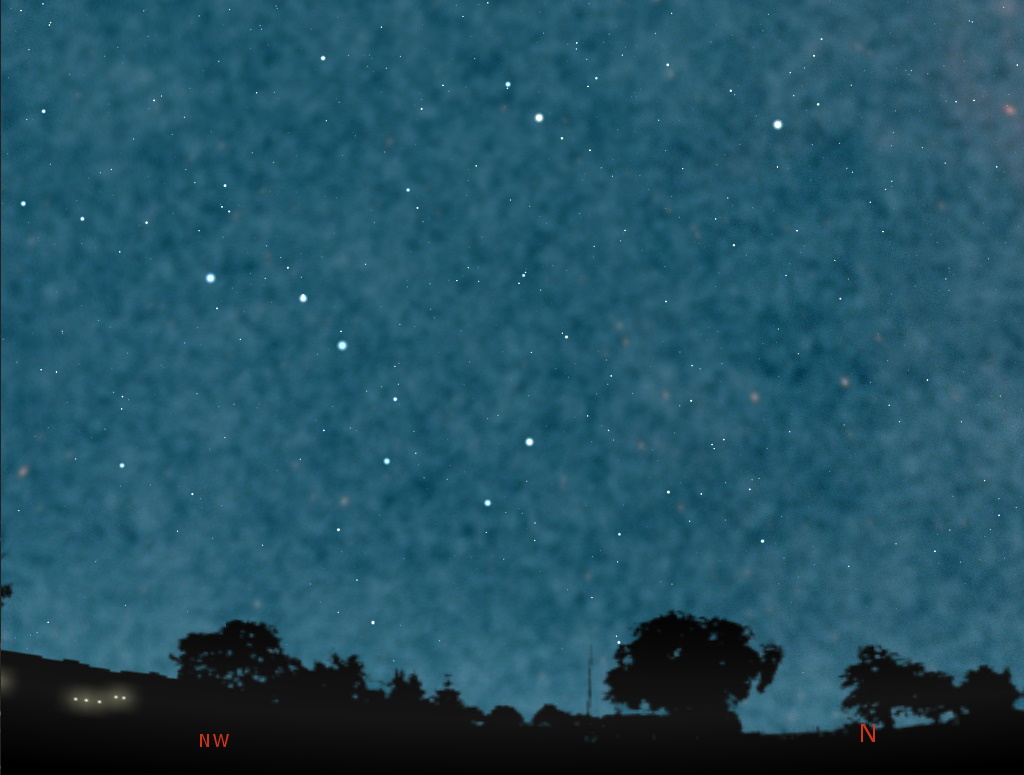 Cosmic Microwave Background Radiation around the constellation Ursa Major from the the Planck mission – PLANCK R2 LFI color composition – 30-44-70 GHz.
The Planck mission will collect and characterise radiation from the Cosmic Microwave Background (CMB) using sensitive radio receivers operating at extremely low temperatures. These receivers will determine the black body equivalent temperature of the background radiation and will be capable of distinguishing temperature variations of about one microkelvin. These measurements will be used to produce the best ever maps of anisotropies in the CMB radiation field.
Source: Stellarium, edited by: Bob Trembley

The Moon is a waning crescent, visible low to the east before sunrise – my favorite in the morning with coffee! Both my wife and I saw it with bright earthshine this morning.

After September 28nd, the Moon will be a waxing crescent, visible toward the southwest in early evening; more opportunity to see earthshine!

I was rather pleased with how well SpaceEngine simulated earthshine on the waxing crescent Moon early next week: 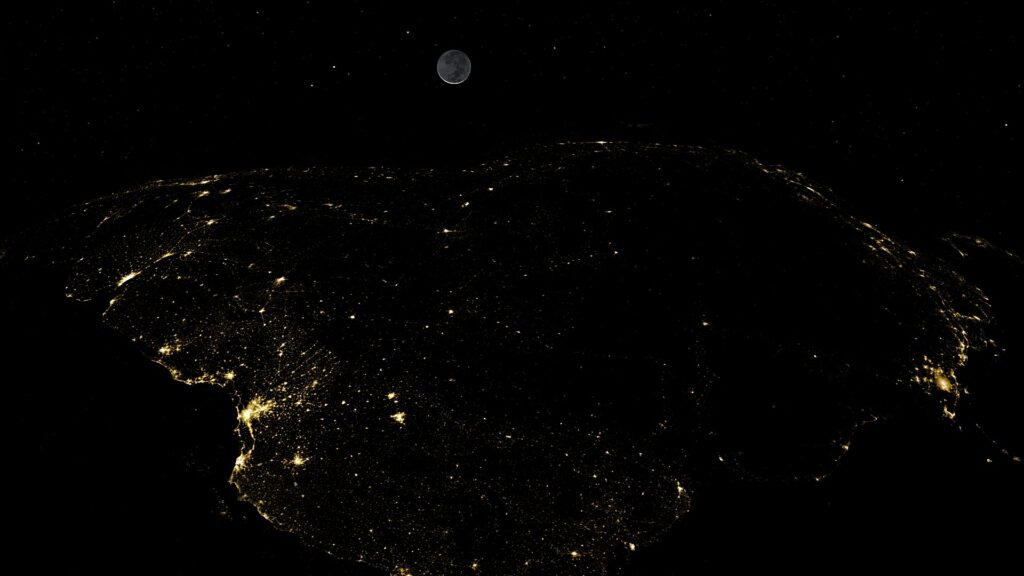 I’m proud to announce a milestone for our #Artemis program to land the first woman & next man on the Moon by 2024. Today, we awarded a contract to @LockheedMartin for a @NASA_Orion spacecraft production line that will support as many as 12 missions. More: https://t.co/zUhe7CLgvk pic.twitter.com/etBmkx3dp4

The Sun has been spot-free for 21 days; the northern coronal hole remains huge, the southern hole is all but closed, and a monster coronal is on the equator, facing right at us! 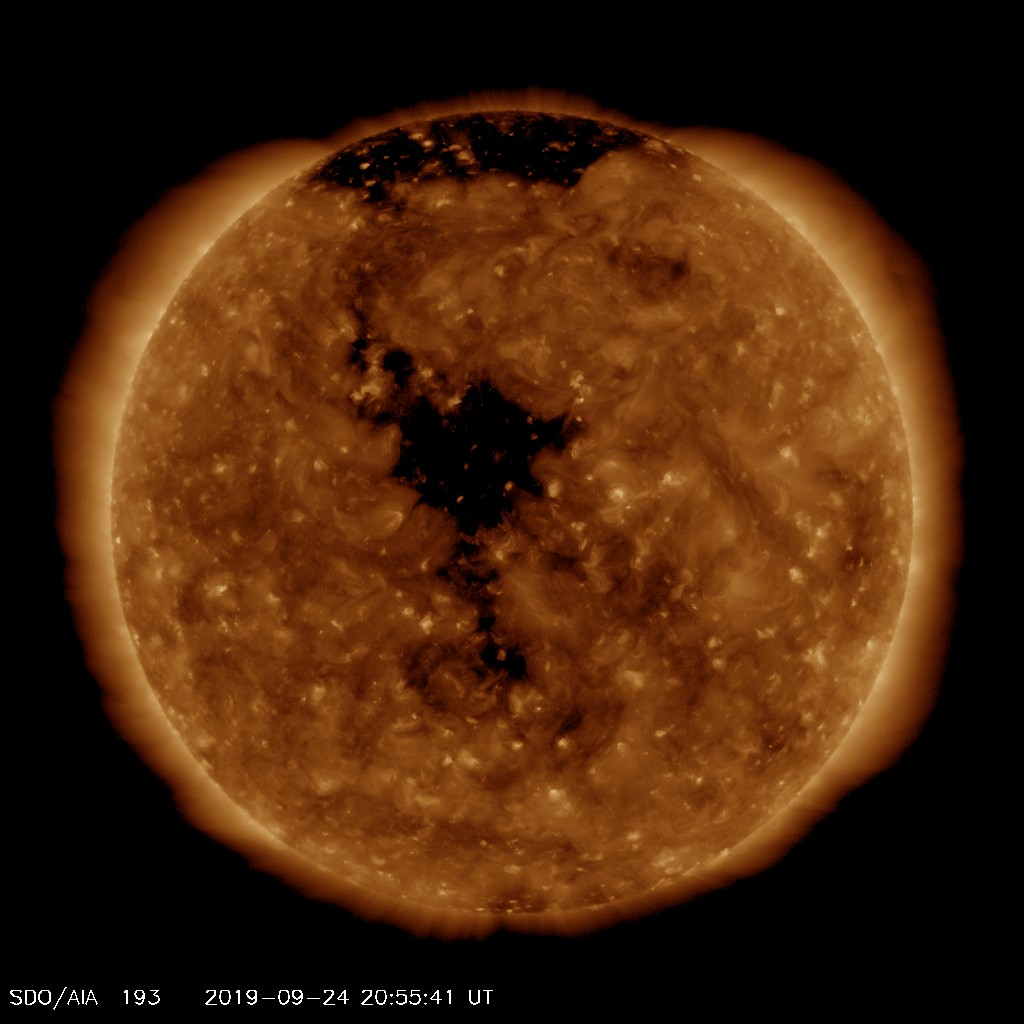 One really large prominence recently, and several smaller ones over the last couple days 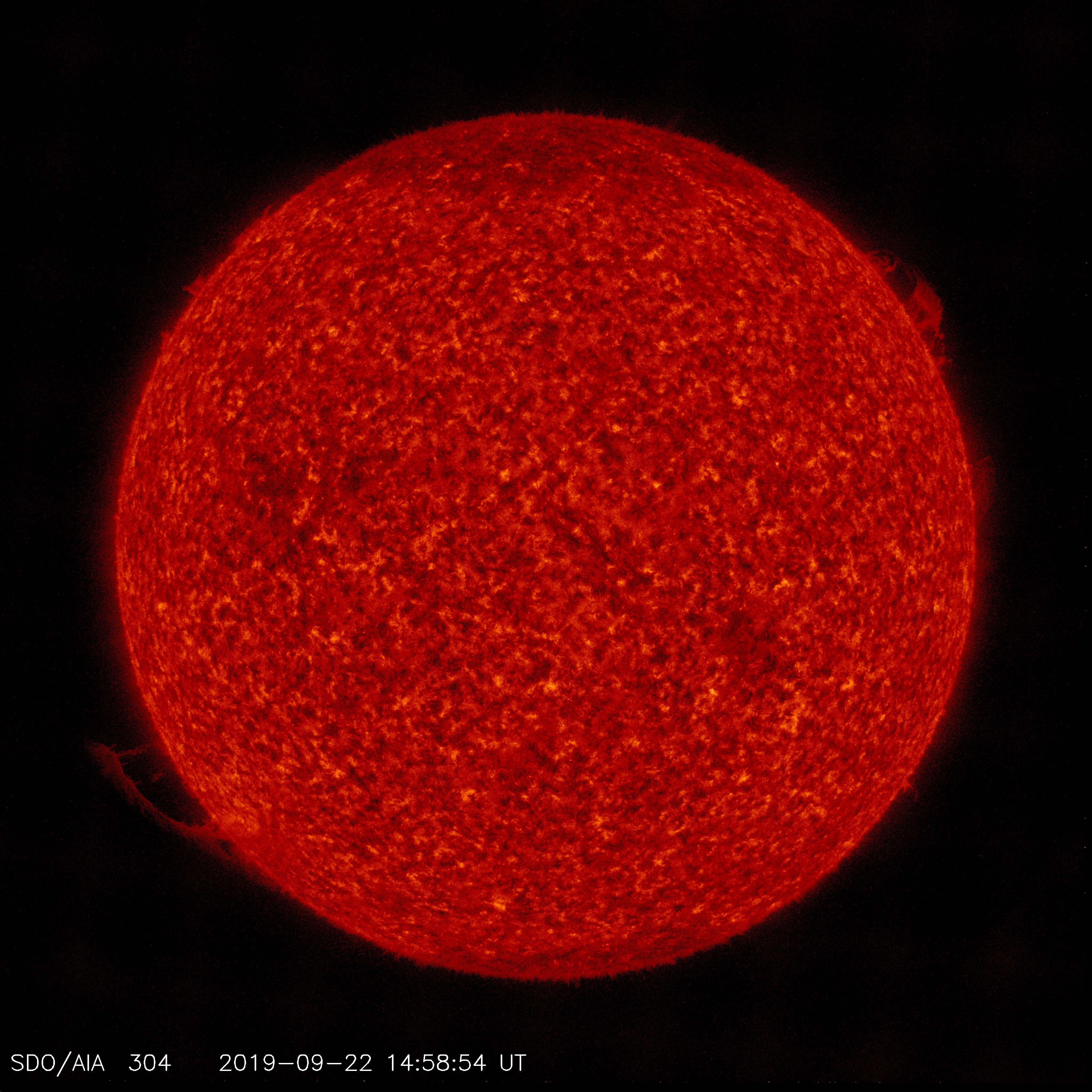 #Space #Science #ImageOfTheWeek: As part of its testing campaign to prepare for launch, our #SolarOrbiter spacecraft underwent a special set of tests in a very unique location…
☀️? https://t.co/JXipdOAYED pic.twitter.com/1FCeTqglod

Position of the planets and a couple bodies in the inner solar system: 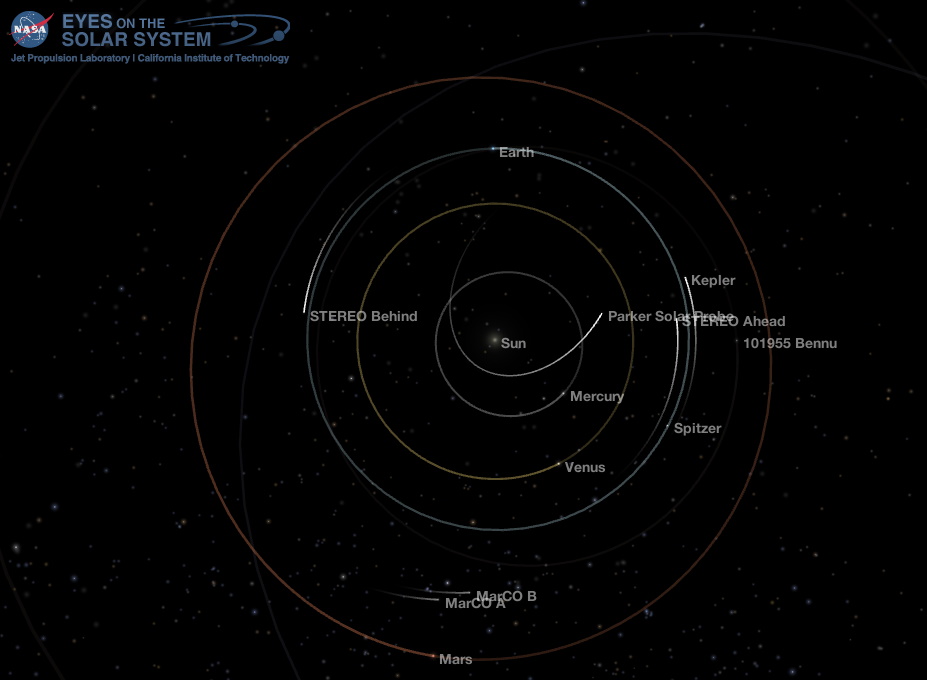 Position of the planets and some spacecraft in the inner solar system, Sep. 24, 2019. Credit: NASA Eyes on the Solar System / Bob Trembley. 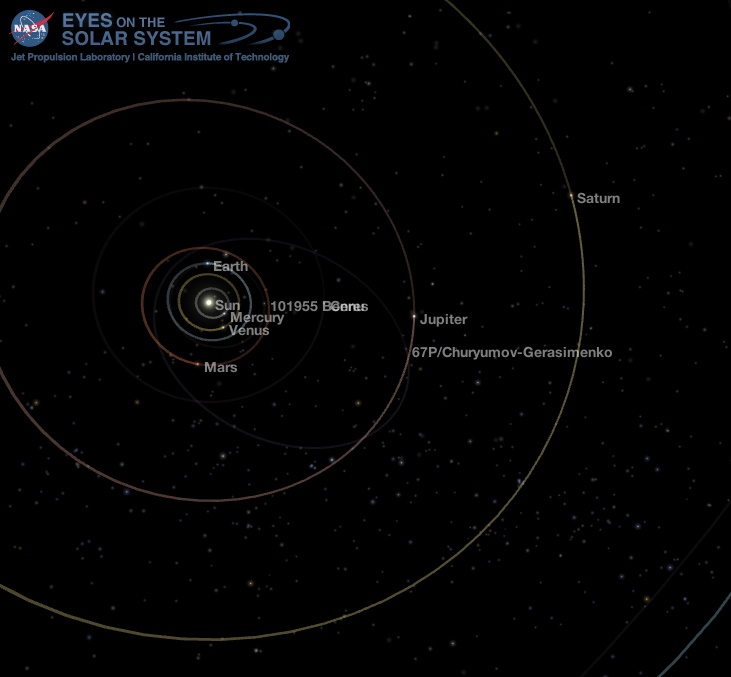 Position of the planets in the middle solar system, Sep. 24, 2019. Credit: NASA Eyes on the Solar System / Bob Trembley.

Position of the planets and a couple bodies in the outer solar system, with the orbit of dwarf planet Eris highlighted: 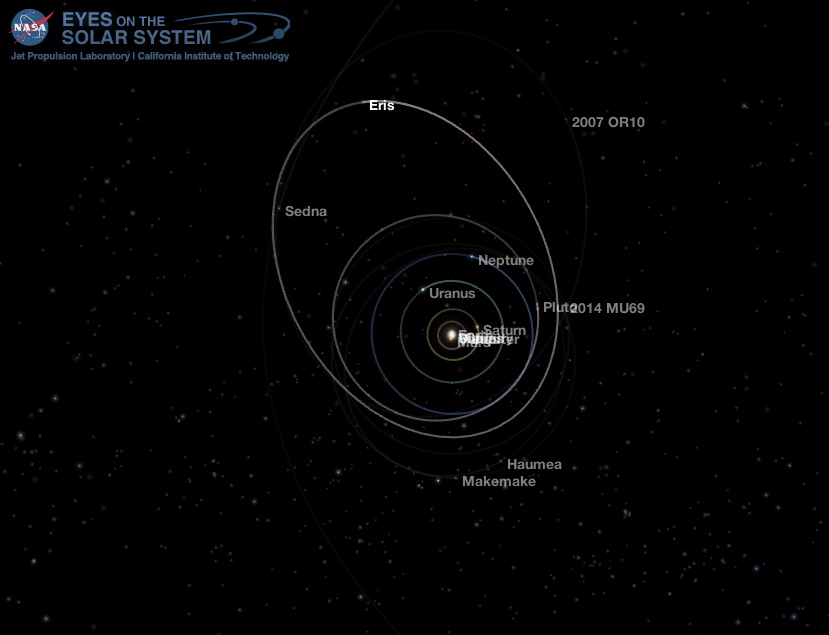 Position of the planets in the outer solar system, Sep. 24, 2019. Credit: NASA Eyes on the Solar System / Bob Trembley. 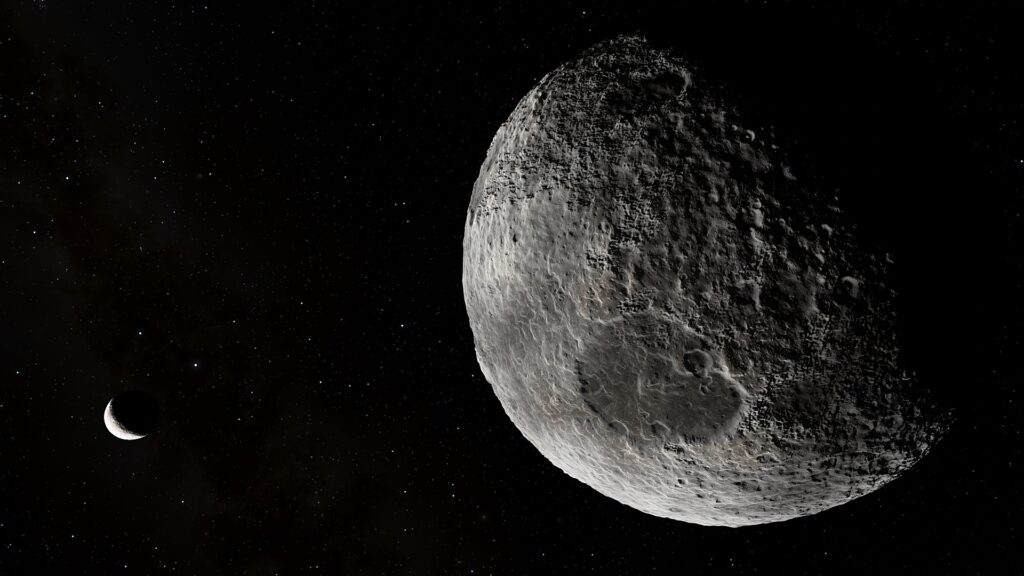 I used SpaceEngine to land on Dysnomia and look at Eris on the horizon: 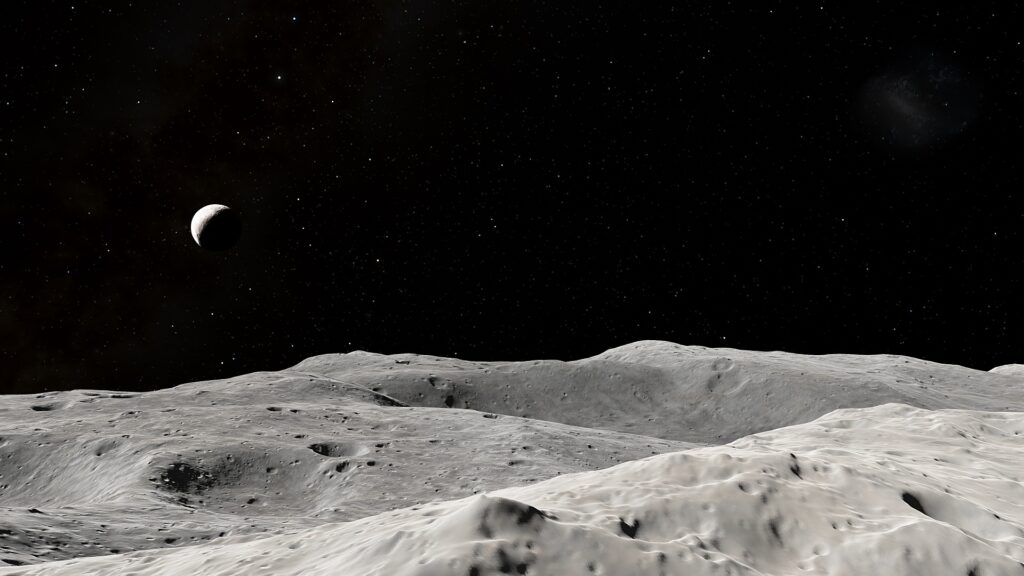