The school year is starting back up, and my wife and I will again be running an after-school astronomy and space science club: the Endeavour Space Academy. This year, I’m going to concentrate on different bodies in the solar system, and the science of how astronomy is done. Students will also be required to log some observing sessions. During the first few minutes, I take the students through my latest “In the Sky” post for current events, and what to look for in the sky.

Saturn, Jupiter and the Moon grace the southern sky all week, making this a great time to do early evening sidewalk astronomy!

Before sunrise the constellation Orion can be seen in the southeastern sky. 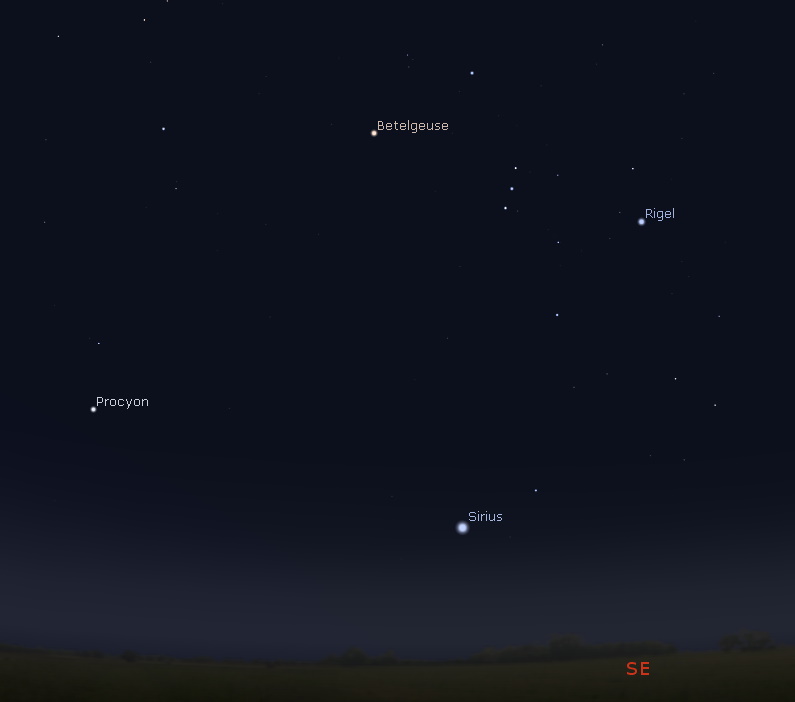 Ursa Major appears in the north-northwestern sky at 10:00 PM this week 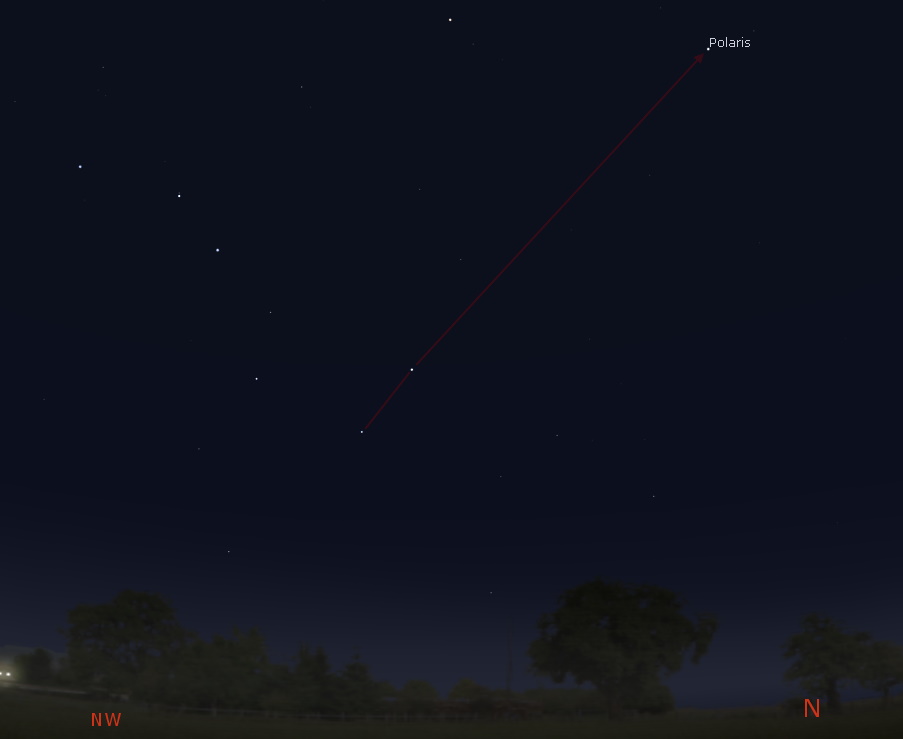 The “Big Dipper” asterism of Ursa Major with a red line showing how to star-hop to Polaris “the North Star” in the north-northwestern sky at 10:00 PM this week. Credit: Stellarium / Bob Trembley. 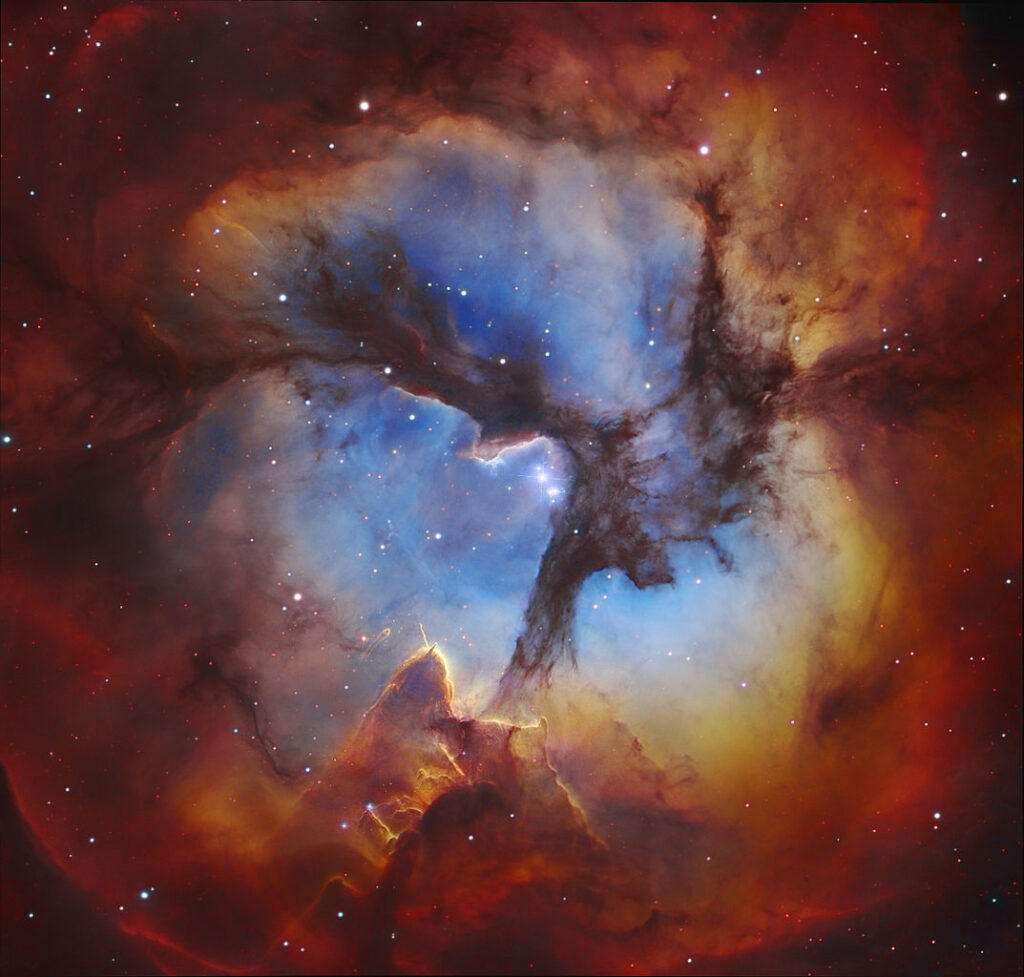 “Messier 20 (M20), also known as the Trifid Nebula, is a famous star-forming region located in the constellation Sagittarius.

The nebula’s designation in the New General Catalogue is NGC 6514. The name Trifid refers to its three-lobed appearance. Messier 20 consists of several different objects: an emission nebula, a reflection nebula, a dark nebula and an open star cluster.

The dark nebula, catalogued as Barnard 85, consists of dust clouds that absorb and block light from the bright objects behind them. It is responsible for the apparent gaps in the larger emission nebula that give M20 its trifurcated look.

The other two types of nebulae – emission and reflection – make M20 glow in different colours in images.

Emission nebulae are energised by the ultraviolet light of nearby stars and usually appear red in photographs. These nebulae are clouds of extremely hot hydrogen gas and usually regions where new stars are being formed. The light of the stars illuminates the surrounding clouds, ionizing photons in large portions of the clouds.

Messier 20 is a popular target for amateur astronomers as it is quite bright, even when seen through a small telescope. It has an apparent magnitude of 6.3 and lies at an approximate distance of 5,200 light years, or 1,600 parsecs, from Earth. M20 has a linear diameter of over 40 light years and is only 300,000 years old. – messier-objects.com

As a child of the 1960’s, I remember the first time I learned about the Trifid Nebula – it was after having seen the movie “The Day Of The Triffids;” I am unable to think about M 20 without thinking about the monster movie… Oh to see a meteor shower like the one in the beginning of that movie! Although meteors don’t typically come from all different directions like in the movie tho…
https://youtu.be/QXOikSqJ83k

The first-quarter Moon occurs on Friday September 6th, it will be visible high in the southern sky in early evening.

After September 6th, the Moon will be a waxing gibbous, visible to the southeast in early evening, and up for most of the night.

China's Lunar Rover Has Found Something Weird on the Far Side of the Moon https://t.co/yo3lPYKkP1 pic.twitter.com/BKaQAX5pwd

The Sun has a very small spot – Spaceweather.com says that “AR2748 has a magnetic polarity that identifies it as a member of old Solar Cycle 24. It poses no threat for strong solar flares.”

The north pole coronal hole continues to be enormous, while it appears that the hole at the south pole has diminished greatly. Several smaller coronal holes pepper the Sun’s face.

Some excellent prominences for photographs over the last couple days. The location of sunspot AR2748 can be seen as the bright area just above the equator.

If you saw this event, please report it here: https://t.co/6WrVfuI28I

Position of the planets and a couple bodies in the inner solar system – I highlighted the Parker Solar Probe, which has passed perihelion #3 on September 1st. 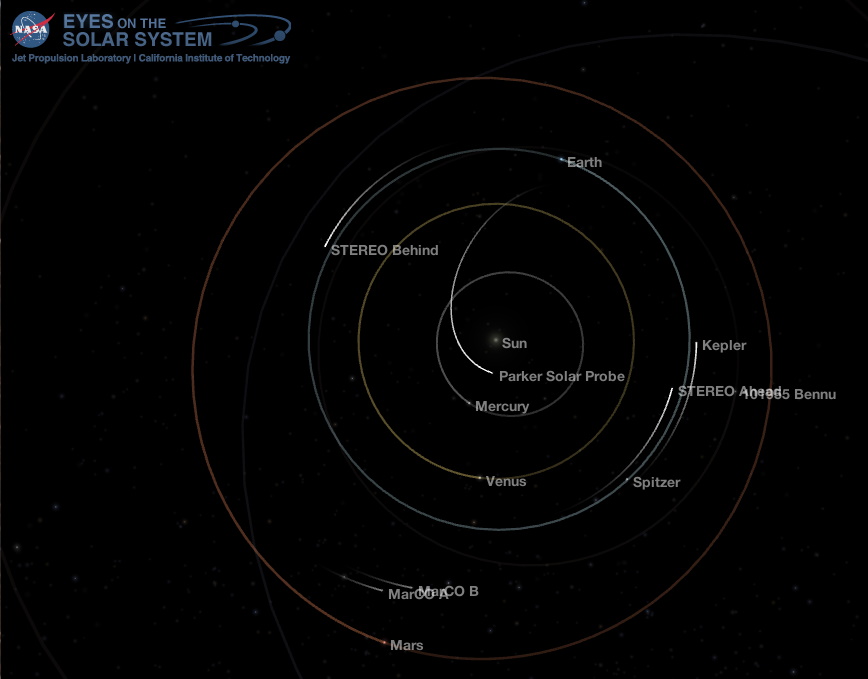 Position of the planets and a couple spacecraft in the inner solar system, Sep. 3, 2019. Credit: NASA Eyes on the Solar System / Bob Trembley. 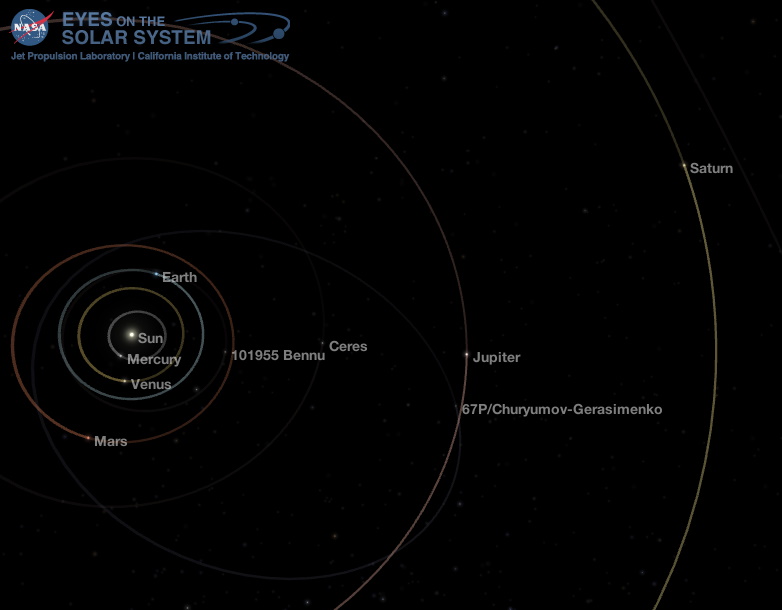 Position of the planets in the middle solar system, Sep. 3, 2019. Credit: NASA Eyes on the Solar System / Bob Trembley.

Position of the planets and a couple bodies in the outer solar system – I highlighted dwarf planet Eris: 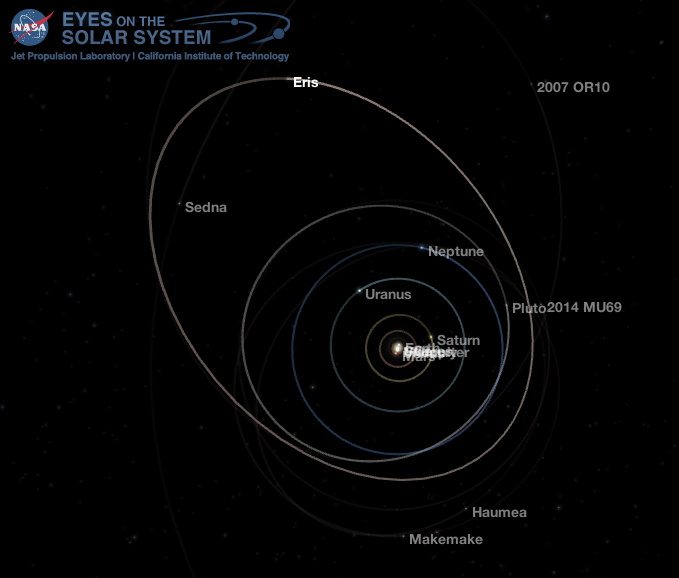 Position of the planets in the outer solar system, Sep. 3, 2019. Credit: NASA Eyes on the Solar System / Bob Trembley.

This pic is a hypothetical view of the dwarf planet Eris looking back at the planets; I kept the orbit line (red) to show its inclination to the plane of the ecliptic. 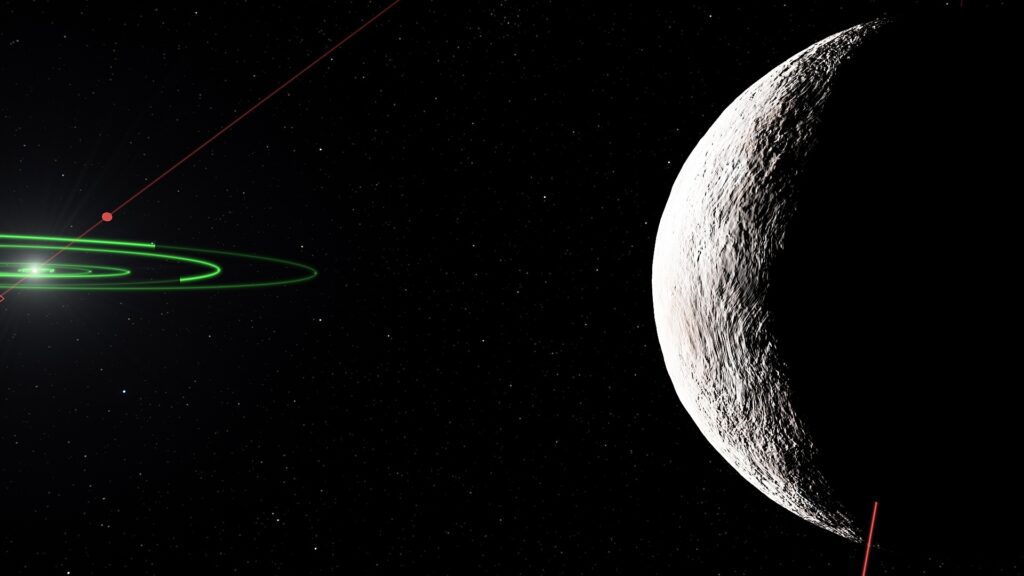 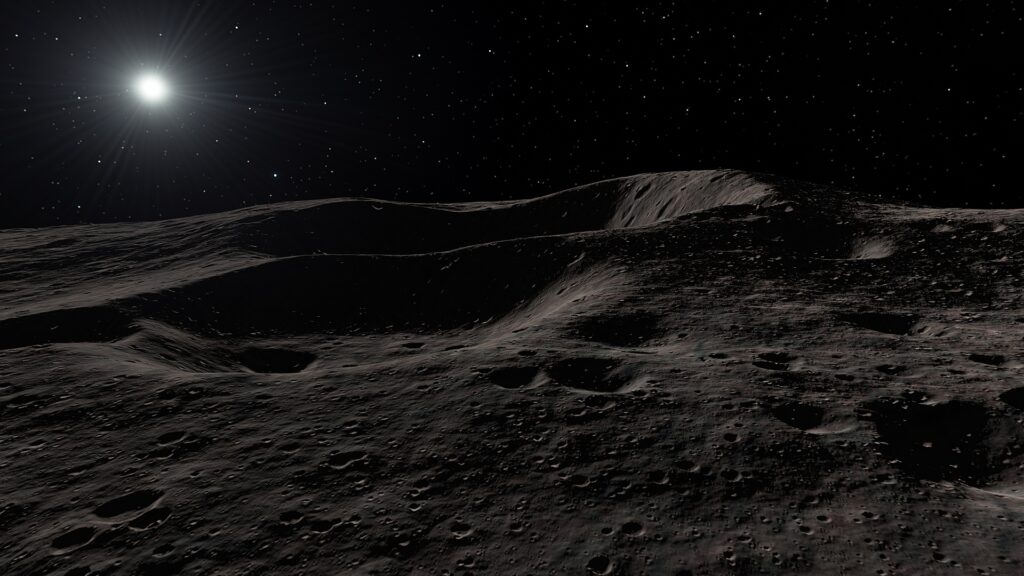 In this month's sky, look for lovely crescent Moons at the start and end of the month. ? And the September equinox brings the beginning of fall in the Northern Hemisphere. https://t.co/ZS3eQzbWaJ pic.twitter.com/5vZ5MLxgaG

This is dusk on Bennu, which is why the rocks cast such long shadows. While it looks dramatic, these shadows help the team understand the heights of Bennu’s surface features. And here, they also highlight the depth of the cracks on that big boulder.https://t.co/kN3cecFrFe pic.twitter.com/Tn6c9EEVVq

Our #ParkerSolarProbe is about to make its third close pass by the Sun. As the spacecraft reaches the closest point, it will be traveling at the astounding speed of about 213,000 mph (343,000 kilometers per hour) relative to the Sun! https://t.co/VtKqaNR9A1 pic.twitter.com/Au6ifYRrGJ

Cameras outside the station captured views at 11:27 a.m. ET on Sept. 2 of #HurricaneDorian over the northwestern Bahamas. The @NWSNHC said Dorian was almost stationary, moving toward the west at just 1 mile an hour just over 100 miles east of West Palm Beach, Florida. pic.twitter.com/b6ph2teoIZ

NOAA's #GOES16 continues to track #HurricanDorian, edging slowly toward the U.S., as day fades to night. For the latest on Cat. 4 #Dorian, including #hurricane watches and warnings: @NHC_Atlantic #flwx #gawx #scwx #ncwx pic.twitter.com/ujIJ9O3vJ6

The destructive eyewall of #HurricaneDorian continues to lash #GrandBahamaIsland as the now Cat. 4 storm inches slowly toward the west-northwest near 1 mph. Find the latest updates on #Dorian at https://t.co/ScLdyBac9D. More: https://t.co/BCKaEWkGgg pic.twitter.com/Q4heq00Ohc

The eye of #HurricaneDorain. You can feel the power of the storm when you stare into its eye from above. Stay safe everyone! pic.twitter.com/yN3MGidY3N