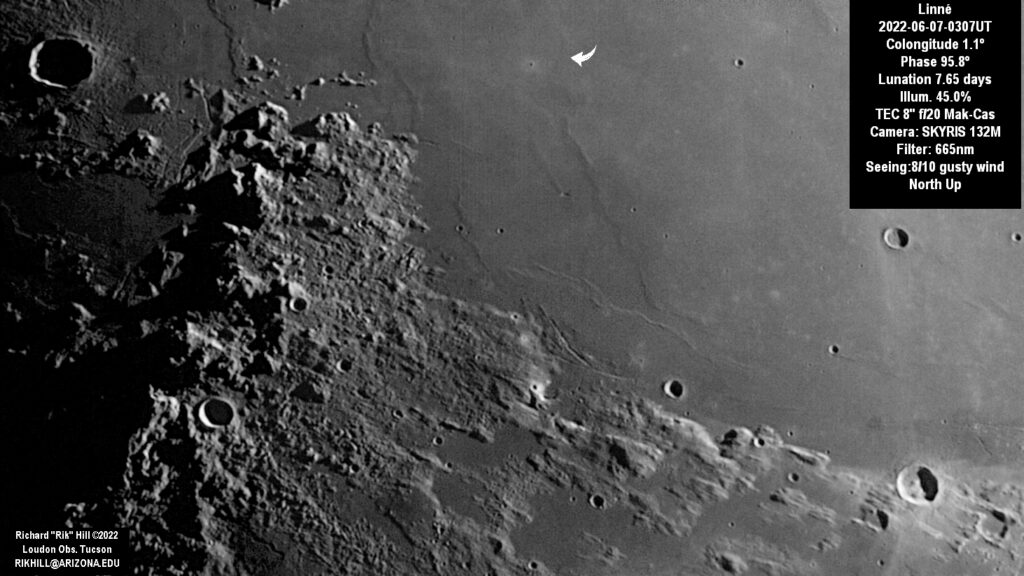 This is the same region done in an image I posted about a year ago, with some important differences. The extent of this image runs from Autolycus (41km dia.) in the upper left to Menelaus (27km) in the lower right. Note to the right of Menelaus the small Rimae Menelaus with more of them just above almost orthogonal to these making up more of the rimae system. This crater sits on the southern coastline of Mare Serenitatis and the rimae, or most of them, are parallel to this coastline caused by subsidence as the lavas cooled. Just to the left of Menelaus is a smaller crater with a much larger name, Sulpicius Gallus (12km) and above this are another series of rilles, Rimae Sulpicius Gallus also parallel to the coastline. The grand mountain range on the left side of this image is the northern portion of the Montes Apenninus with the brightly lighted peaks reaching 4,000-5,000m height.

But the highlight of this image is the little white blemish in Mare Serenitatis north of the Rimae Sulpicius Gallus just below the upper image edge (see arrow). In the center is a dark spot. This is the shadow filled tiny crater Linné (2.2km) a relatively recently created crater of only a few tens of millions of years in age. Being in a barren expanse of the mare it had been drawn on maps made by lunar astronomers up through the first half of the 19th century and was well known with size estimates ranging from 8-10 km. Then in 1866, Johann Friedrich Schmidt, a well known, respected and very competent lunar astronomer in his own right, reported that the crater was gone and only a white spot remained as seen in his 158mm f/15 refractor at the Athens Observatory within eyesight of the Acropolis! There was a scramble to verify this transient event and reports ranged from confirmation to refutation. This crater was at the very limit of detection for his telescope. Larger apertures in better skies than downtown Athens cleared up the issue. It can be seen here as not just a white spot, but a small discernible shadow filled crater surrounded by a dull white ejecta blanket. LROC QuickMap shows it very nicely and the LROC webpage for this crater shows rocks inside the crater less than a meter across!!