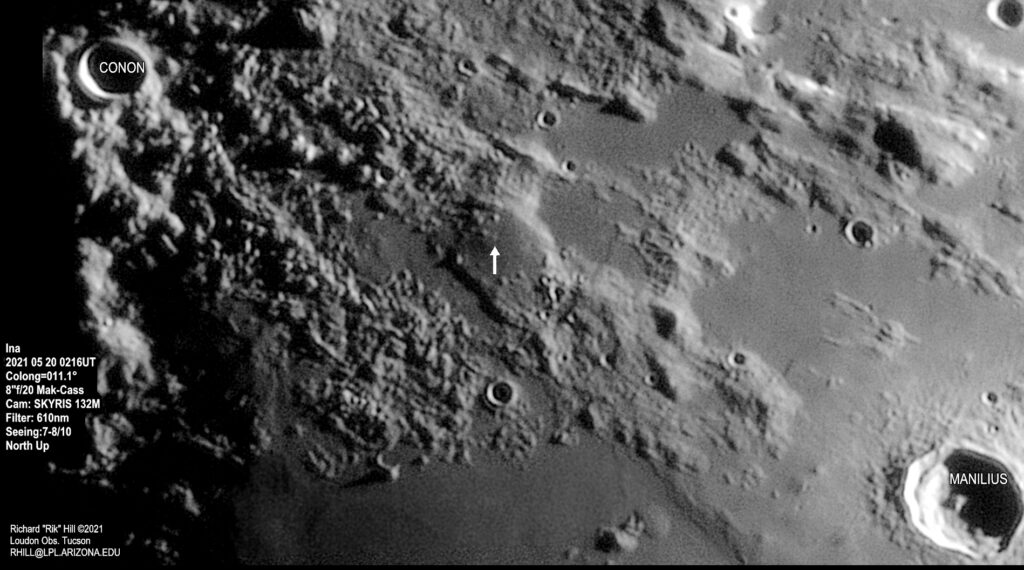 Before he died, I was at the home of Ewen Whitaker when he challenged me to find the lunar feature Ina. He showed me a spacecraft image but never told me the size, just that it was “very small”. This year I gave it a go, hunted down the location of it and was doubtful I could really see the tiny “D” shaped volcanic feature. It’s only 1.9×2.9km in size on a plateau in the middle of Lacus Felicitatis. It took a while but I did manage to find it as an irregular shaped spot on my image which is pretty much all you’re going to see in an 8″ aperature. It shows up very well on the LROC Quick Map as a sideways “D”. There is nothing else like it on the Moon and it’s slightly blue tint would make the good use of the red filter I used for the image.

Several larger craters are labeled in this image for easy reference. Above Manilius (41km dia) in the lower right corner is a flat area that is Lacus Doloris. Lacus Felicitatis is the separate flat area a little further north. On the diagonally opposite corner of the image is the crater Conon (22km) in the Montes Apenninnus and below my arrow is a smaller crater, Yangel (9km). So now you have enough information to go hunt little Ina on your own!