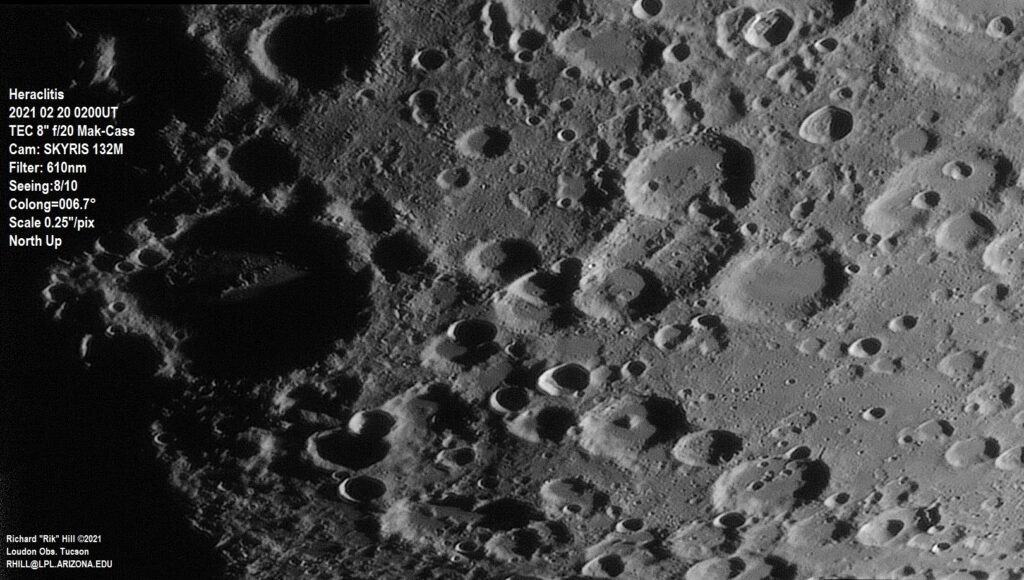 Heraclitis is the the sideways Mickey Mouse in the middle of this image. The flat floored crater just right of center is Cuvier (77km dia). It forms one of the ears of Mickey. Above and to the left is another similar sized crater Licetus (77kim) forming the other ear, and between is an odd elongated feature with a crater at the left end. This forms Mickey’s nose and is Heraclitus and Heraclitus D the 50km diameter crater at the end. Heraclitus itself is listed as 94km around but clearly is not round. Measuring on LROC QuickMap I get 40x60km.

On the far left side of the image is the large crater Maginus (168km) still deep in shadow except for a little shaft of sunlight that is shining through a low spot in the eastern wall. Above, fully in shadow is Proctor (54km) and further north even deeper in shadow is Sausure (56km). East of Cuvier (right) and a little north is the crater Clairaut (77km). Due south of Cuvier is Jacobi (70km) and above and west of it is Lilius (63km) with a little central peak.

So what makes a feature like Heraclitis? Two schools of thought here. First of all, it is a Pre-Imbriam crater between 3.85-4.55 billion years old so whatever the origin, there has been a lot of modification in the intervening 4 billions years. One speculation is that it is the merger of two or more craters. We have other examples of this on the Moon. A second idea attributes this elongated formation to very low angle impact similar to that thought to have formed Messier A&B. Pick your favorite cause!