A while back, I shared with you my hope of going to see the launch of the Parker Solar Probe as part of my vacation time. Well, a new assignment later and that goal needed to be put aside. Nothing kills vacation plans like packing up your life and then unpacking it again in the space of a month. Still, I am greatly looking forward to following the Parker Solar Probe as it makes its journey to our star!

When digging around on the NASA webpage created for this mission, the technology put into this probe is mind boggling. The most basic achievement (hopefully) is the development of a probe that can survive the intense heat and radiation of the sun. Presuming this technology holds, this probe will give us information about our star that might unlock some of the great, unknown mysteries of the Sun and most likely open up new questions for exploration. In short, the Parker Solar Probe will feed one of the most basic intuitions of the human person: The desire to explore and understand this universe of wonder.

A visual of Pythagoras’ demonstration of the math of the heavenly spheres.

These past few years have been a scientific goldmine of discoveries. I never thought, as a trained musician, a scientific discovery would emerge that “listened” for the sound or “music” of space through something called “gravitational waves.” In music history, the study of the music of the spheres was often presented as an ancient, out-of-date understanding of our universe. Granted, gravitational waves aren’t going to be mistaken for heavenly ratios of numbers that contribute to music theory anytime soon. However, the simple fact that there is a way to “listen” to space through subtle vibrations in the fabric of the universe easily captivates the imagination of this musician priest! 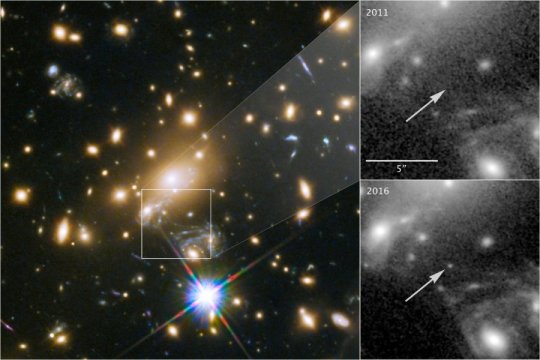 Though the discovery of signs of water on Mars is not new News, the possibility of a saltwater sea under Mars’ southern pole is rather exciting. My presumption is that this well founded speculation will lead to the development of new space missions to try to both verify the existence of this salt water and then find out exactly what this “sea” is like. As is often the case with Mars discoveries, the mix of science with a wild history of science fiction about Mars creates a plethora of bad interpretations of what this discovery actually means. Still, this discovery may help shed light on one of the most basic question of the universe: Is there life outside our common home? Throw in Brenda Frye’s team discovering the oldest known star in the universe, and we begin to see that this is a great time to follow the science of space!

As I have shared with you in the past, my greatest joy as a hobby astronomer is being wrapped in awe and wonder. Whether it be peering at ancient star clusters through my small, backyard telescope or gazing upon solar fares on the sun, the universe provides a constant sea of wonder, begging us to ask the big questions of life and continue to scratch the itch we all have to understand what exactly it is we are looking at. As a Catholic Priest, this curiosity bleeds into more theological questions about the origins of the universe, my origins, and the purpose of my existence. These questions remind me how many attempts have been made to define what it means to be human. Whether it be scientific, philosophical, and theological, I think one of the sturdiest starting points we can agree upon is our unique ability to wonder.

Spiritual Exercise: What is it about our universe that draws you into wonder? What are the big questions of your life that you wrestle with? Share your thoughts and, together, let us explore these questions, regardless of our faith background, to help us understand not only our origin and place in the universe, but what it means to be a part of the human family. A family of curiosity. A family of hopes. And a family full of wonder and awe – the beginning of wisdom!