Every year we send out a real, paper, Christmas letter to all our supporters; if you have supported us in the past you should have received it by now. But just in case… and for the rest of you… here’s what we mailed out!

Have you had a chance to look at the evening sky this month? As winter approaches, so do the wonderful constellations of Taurus, Orion, and Gemini rising in the east. To the west, brilliant Jupiter and pale-yellow Saturn are moving closer and closer together; just before Christmas, on December 21, they’ll be so close together that you won’t be able to tell them apart with the naked eye. (If you miss this conjunction, you can look for it again in sixty years’ time.) Some imaginative types claim this alignment of the planets is a re-enactment of the Star of Bethlehem, though I have my doubts! 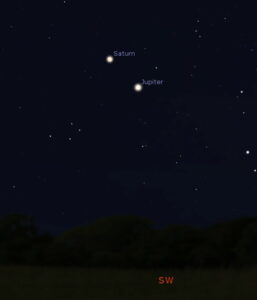 The appearance of Jupiter and Saturn on November 25 as seen from Earth. 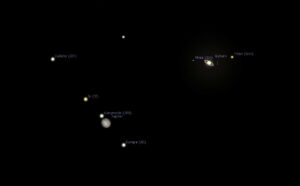 How Jupiter and Saturn and their moons will appear in the southwest sky on December 21 through a telescope. (Images created by Bob Trembley using Stellarium)

In turbulent times like these I find great comfort in watching the stars. St. Ignatius found “the greatest consolation… from gazing at the sky and stars, and this he often did and for quite a long time.” The beauty of the stars and planets — and the way we can predict their motions — reminds me that we are still under the protection of the One who created both the stars and the laws that control their motions.

He also created us. He gave us the talents and ability to develop our sciences, to understand both the universe over our heads and, yes, even the diseases (and cures) here on Earth.

The pandemic has affected all of us. The Vatican Observatory Summer School (VOSS) scheduled for last summer had to be canceled, and our January 2021 workshop on Astronomy for Catholic Ministers and Educators (ACME) has been postponed by a year. The Vatican Advanced Technology Telescope (VATT) and all the other telescopes of the Mount Graham International Observatory were shuttered from mid March until the end of May, reopening only after strict health protocols were put in place. When the telescope engineers finally got back into our mountaintop site, they discovered that the living quarters and control room had been infested with moths!

Since March I have rarely left our Specola residence except for my morning walks at sunrise, where I have admired brilliant Venus in the east… and met probably every neighborhood dog and its owner, also out for walks at that time. My in-person presentations have been replaced by dozens of online video talks.

On the bright side, I used to find it hard to take time off for scientific research after I became Director of the Observatory; but this time at home has finally given me a chance to catch up on what’s been happening in the study of asteroids and meteorites. I have attended the on-line version of the AAS Division for Planetary Sciences meeting, was co-author on a major scientific paper about meteorites, and presented my work at the University of Arizona’s Lunar and Planetary Laboratory Conference.

And here in Tucson I have been able to devote a lot of attention to the work of the Vatican Observatory Foundation.

This year we received a grant from the Templeton Foundation to completely revamp our web presence, which is a major source of both outreach and fundraising. And with the generous support of the Jesuit Community, we have just signed an agreement with a local consulting group to develop an endowment drive aimed toward finding new major donors for our work. You’ll be seeing the results of these efforts in the coming year. This work has gone forward thanks to the enthusiastic efforts of our Foundation staff, especially our development officer Fr. Justin Whittington SJ and our internet specialist, Mr. Robert Trembley.

(The pandemic hit particularly close to Robert; his brother died of the virus on Easter Sunday. Please remember him in your prayers.)

Along with those efforts, we have launched two new programs for the Foundation. 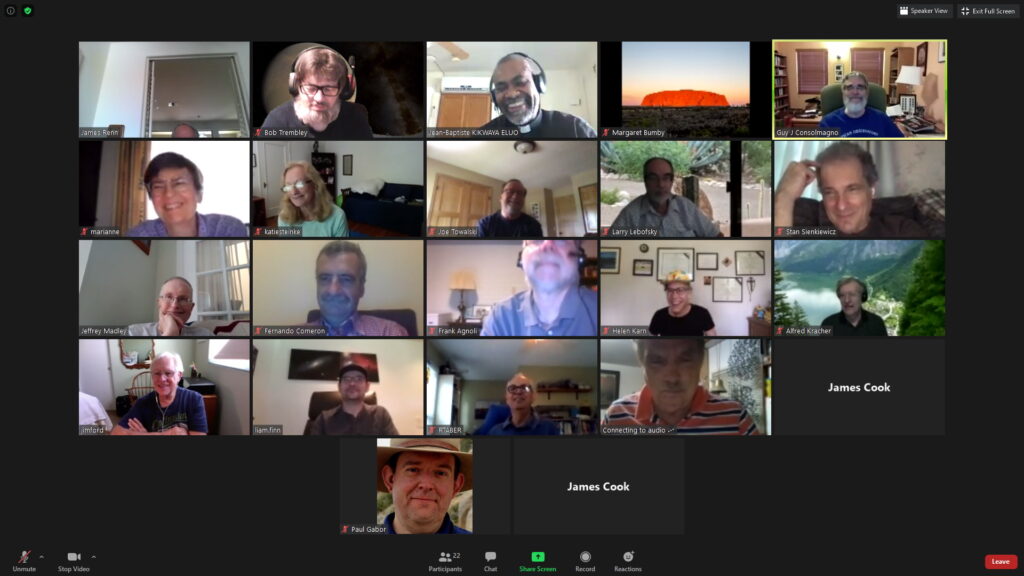 The George Coyne Memorial fund, honoring our Foundation’s founder, is more than two thirds of the way to raising $100,000 in his memory. When we reach our goal, we will be able to publish a book of his essays along with the memorials that so many of his friends have left on our web site. Go to https://www.vaticanobservatory.org/fr-george-coyne/ and follow the links to see what his friends have said… and to add your own memories.

And our Moonth-ly Meet-ups let active participants of our Sacred Space program join up, live via Zoom, every month with a Vatican astronomer. We get to meet the people whose work we support: where they came from, how they got interested in astronomy, how they joined up with us. And we get to ask them questions about their current research, what it’s like to use our telescopes and to live and work at the Vatican.

These meetings occur every full Moon. That schedule is a fun way to to remind us to keep track of the one nighttime object that anyone can see in the sky, even through city lights, our “faithful witness in the sky” (Psalm 89:37). It ensures that the days of the meetups get spread around different days of the week. And, as it happens, full Moon is when most astronomers avoid using the telescope since its brightness then makes it hard to observe faint objects; thus our astronomers are more likely to be off the mountain and available to chat during daylight hours.

The history of Galileo reminds us that astronomy matters even in turbulent times. His greatest works were written when Italy was struck by plagues, and Europe was immersed in the Thirty Years War. Both of those tragic events played a role in his terrible trials. It would have been easy, then, to be consumed by what was going wrong in the world. But instead, as one of his supporters in the Church predicted at the time, his age is remembered today not for wars and diseases but for Galileo’s triumph of opening up the heavens in a new way for everyone to see, a feat that continues though instruments like our VATT even today.

As we celebrate the holidays at the end of this most remarkable year, let us recall once again why we are engaged in this esoteric business of astronomy.

First, we need to keep doing good science. And second, we need to share this joy with the rest of the world: to offer a chance for students and young colleagues from the developing world, and enthusiastic fans of astronomy of all ages and backgrounds, to join us in experiencing the joy of astronomy.

It’s more than just to show the world that the church supports science. Of course that is central to the mission Pope Leo XIII gave us 130 years ago. But it is also to recall that even when we are suffering from disease, or hunger, or the fear that comes from unsettled times, we should still remember to cast our eyes upwards every now and then at the stars and planets in their beautiful and untiring dance above us. This universe is good; and we should never lose hope in its goodness.

Thank you for the continued support in these uncertain times that keeps us doing what God has called us to do. And thanks for your prayers, and all the other things you do to share the joy of our work with everyone around the world.