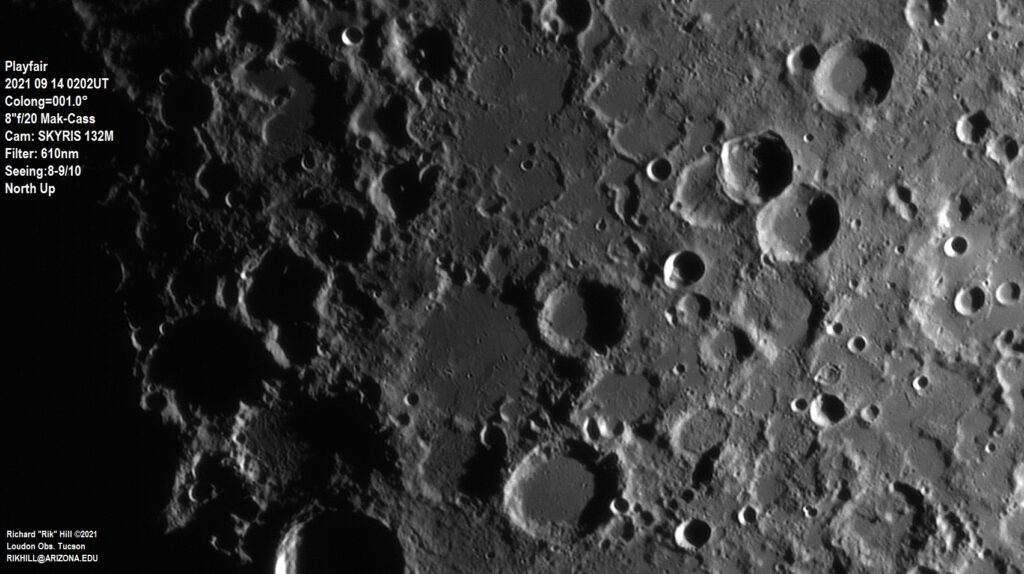 (For full resolution viewing, right click and open the image in a separate tab on your browser.)

There are so many wonderful things to see in the lunar southern highland region around the crater Playfair (49km dia.) seen here in the middle of this image half filled with shadow cast on it’s flat floor. Below it is a larger crater of similar morphology Apianus (65km). Then to the upper right from Playfair are the twin craters Azophi (49km) south and Abenezera (43km) north. Notice the sharp central peak in the latter crater with sunlight catching the very tip and the straight northern wall. It overlaps an older crater that has some interesting striations on its floor. To the upper right of these is the crater Geber (46km) with an interesting slump on the interior of its southern wall. South of Azophi on the lower edge of the image is the crater Pontanus (60km) with a central mound rather than a true peak. It’s the oldest crater mentioned so far between 3.92 and 4.55 billion years old. Between Pontanus and Azophi is a well defined young crater Pontanus D (20km). Just above it is an interesting double walled crater Pontanus E (13km) and to the left of that are two parallel old heavily eroded unnamed catenae.

Going left from Playfair to the terminator we see half a crater at the lower edge of the image. This is Aliacensis (82km) and above it is Werner (71km) and further up is the flat floored Blanchinus (70km) with nice shadows of the peaks of its crater wall on the floor. Next you’ll notice four shadow filled craters in a diagonal row of descending diameters. The lower, larger one is La Caille (70km), the next one up is Delaunay (48km), then Faye (37km) with a tiny central peak tip catching sunlight and lastly Donati (37km). The interesting thing here is just below La Caille and to the left of Blanchinus is the well known fleeting “Lunar X” formed by the walls of these two craters. This is about two hours after it would have been best seen but it still can be made out.

Of course, as usual at this resolution (1km) there’s a lot more to see here. Enjoy the exploration!