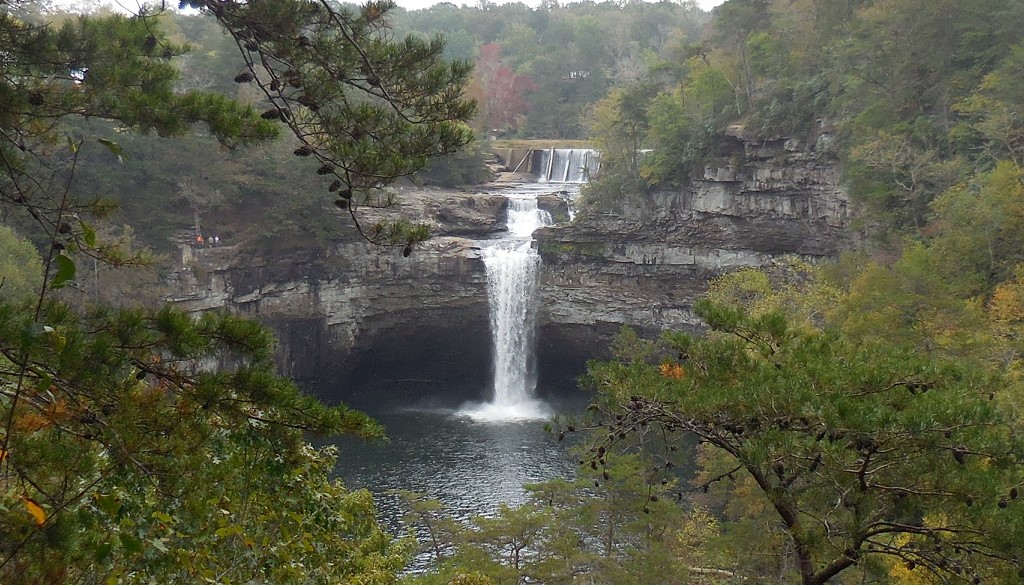 What but science makes the modern world the modern world?  We today travel by means other than our feet.  We read things like this Sacred Space Astronomy blog by means other than gazing at ink on paper.  We have modern travel and modern communication and modern everything else—that is, we live differently today than has most of humankind throughout most of history—because of science and the technologies that have grown out of science.

An interesting bit of science and technology history can be seen at DeSoto Falls on Lookout Mountain in Alabama.  Here the Little River, which is unique in that it flows for almost its entire length atop a mountain, drops over 100 feet in spectacular fashion.  And atop the falls is an old dam.

That dam is the remains of a 1920s-era hydroelectric power plant.  A sign at the Falls states that the plant was built by Arthur Abernathy Miller, a self-educated electrical engineer.  It generated power for Fort Payne, Alabama and other small towns in the area.  The sign continues:

Miller hired many local men for the construction of his dam, which was first built to a height of 10 feet.  Later various people of the area contributed enough funds to raise the dam an additional 10 feet in order to increase the size of the lake [behind the dam]…. [The lake was] stocked with bass and bream to provide better fishing as well as more enjoyable boating and swimming.

At first Fort Payne was furnished with electricity from dark until midnight.  Then after a number of local women had purchased electric irons, power was supplied on Thursday afternoons to enable ladies to iron.  Later electricity was made available all day and night.  As there was no central switch for the street lights, Ernest Wallis, a young schoolboy, became Fort Payne’s equivalent of the “Old Lamp Lighter”, riding his bicycle up and down the streets at dusk to turn the lights on and returning after dawn to turn them off.

Electrical technology is a direct product of scientific discoveries that occurred mostly in the nineteenth century.  These arguably started with Alessandro Volta’s development of the electrical battery, thus providing a source of electrical current.  A hydropower plant specifically is the result of Michael Faraday’s discovery of electromagnetic induction, and the subsequent development of the electrical generator, which transformed mechanical work into electrical energy.  Falling water, or more specifically, water pressure resulting from an elevated reservoir (like the lake above DeSoto Falls), provides the mechanical work to spin the generator and produce electricity.

Of course, scientific discoveries can have their drawbacks.  Science produces bad things as well as good—pollutants and nuclear weapons as well as electric irons.  Climate change owing to our modern technology is of course the drawback that is getting much attention today.  A world using electric lights and electric irons, and electric dryers and electric air conditioners and so forth requires a lot of electrical generators, most of which are spun by engines that burn fuels that release “greenhouse gasses” into the atmosphere.  And for astronomers, of course, electric lighting goes hand in hand with seeing fewer stars in the night sky.

But it is worth noting that it does not, or did not, have to be this way.  The DeSoto Falls power plant is an illustration of this.  It really had no drawbacks.

Consider: prior to the DeSoto Falls plant, how would people have ironed clothes?  With heavy solid metal irons, heated on stoves that burned gas or wood or coal or some other fuel.  How would the streets, and homes, have been lit?  By gas lamps, perhaps; possibly by oil-burning lamps.

So prior to the plant, clothes ironing involved firing up a hot stove.  In the summer that must have been really hot, unpleasant work.  At all times of the year that might have produced smoke and come at the cost of coal extraction or tree harvesting.  Some lighting possibly involved the use of whale oil, and thus the mass killing of whales.  Lamps in the home were hot.

With the advent of the Miller plant, there was ironing and lighting without hot stoves, flames, and smoky skies.  Flip a switch and—wow!—light, and easy ironing.  The plant was entirely an environmental positive.  It would have had no negative environmental consequences at all.  The dam sat above a tall waterfall—no fish migrations were blocked by its construction.  Plus it produced a nice lake.  Surely this is what people earnestly referred to as Progress.  Better living through science.

Of course in time there would be more irons, plus electric fans, dishwashers, clothes washers; then more devices that consumed large amounts of electrical power, like heaters and clothes dryers and air conditioners.  And there would be abundant outdoor lighting, for people love to drive away the night.  The output of the DeSoto Falls plant was limited by the flow of the Little River (the output from any hydropower plant is limited by the height the water drops and the volume of water dropping).  To generate more electricity would require more electrical generators, spun by fuel-burning engines.  And of course people all over the world want that electrical technology.  Thus we arrive at today’s world, with leaders talking about reducing greenhouse emissions, but always hesitant to ask anyone to turn down the lights or shut off the clothes dryers, while people all over the world see but a few stars at night.

In A. A. Miller’s DeSoto Falls power plant we see a different world.  Here, for a little while, in a certain place, modern electrical technology was just a fantastic thing that did nothing but make everyone’s lives better.  That tells us that technology does not have to have drawbacks.  We just have to think more about what we are doing.  We just have to do things like live with the night sky, and not just wash it out with electric power.