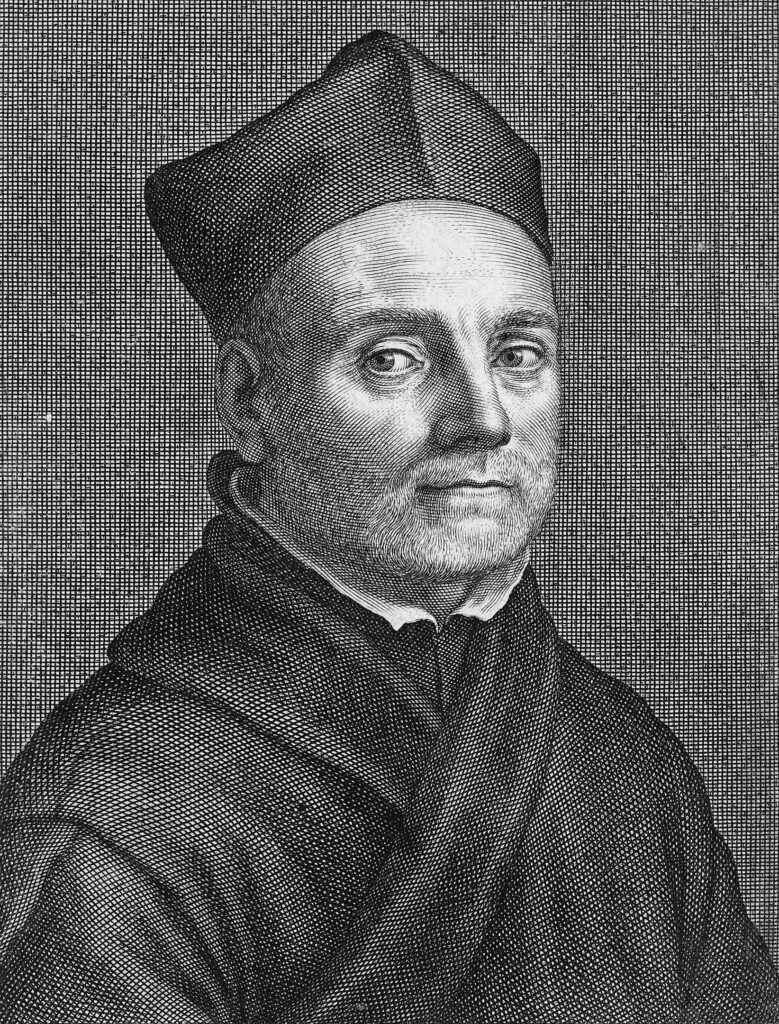 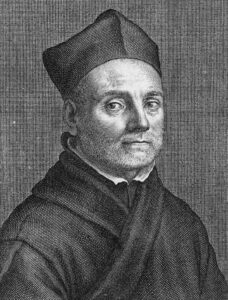 Athanasius Kircher lived at a time when a wealth of information was coming to Rome from the missions — many of them Jesuit-run — around the world.  Missionaries were documenting new plants, animals, cultures, and natural phenomena.  Stationed in Rome himself, Kircher collected these reports and artifacts from abroad and corresponded with scientists and academics throughout Europe.  His writings — more than 40 texts — compile, report, and expand upon many different fields from linguistics to Egyptology to paleontology to magnetism and more.  Living at the end of the age of Renaissance polymaths, he has been called “the last man who knew everything.”

His scientific contributions were largely hit-or-miss, many of them having been corrected or negated by later findings.  Often, historians have emphasized these failures to paint a picture him as anything from a well-meaning but failed scientist to an outright charlatan.  This bias, however, fails to recognize the value of his overall body of work.  More recently, some scholarship has begun to rehabilitate Kircher’s image.  They see the value of his work in collating, reporting, and synthesizing information on different topics from around the world. He was perhaps a bit credulous about the information he received, but incorporated into his body of work are several true gems.

Kircher was born in what is now Germany on May 2, 1602. The son of a lay philosopher, he was the youngest of nine children.  He was educated by Jesuits in Fulda (now Thuringia), and entered the Society of Jesus in 1618. During the novitiate in Paderborn, it is said that he experienced a miraculous healing of his gangrenous leg (injured a few years before).

When in 1621 the diocese of Paderborn was overtaken by hostile troops, he and his fellow Jesuits fled to Cologne, where he completed his philosophy studies. He spent his regency teaching in Koblenz, and then in Heilegenstadt.  By this time, he had already developed proficiency in mathematics, philosophy, and languages, including Hebrew and Syriac. He also began dabbling in the construction of devices, where others (including the elector-archbishop of Mainz) began to take notice of his gifts.

During his theological studies in Mainz, he acquired a telescope for the study of sunspots.  After his ordination in 1628, he began teaching mathematics and ethics at the University of Würzberg.

In Würzberg, he published Ars Magnesia, his first work on magnetism.  In 1631, due to the effects of the Thirty Years War, he was driven out and went to France, to the University of Avignon. It was there that he began to acquire international renown and patronage for his scholarly endeavors.

After the death of Johannes Kepler, Kircher was assigned to succeed him as mathematician to the Hapsburg emperor in Vienna, and he began traveling to his new post. Unbeknownst to him, his orders were rescinded in transit and he was reassigned to Rome. Coincidentally, his ship was driven off course by a storm and Rome is exactly where he ended up in 1634.

He spent the rest of his life based in Rome, succeeding Fr. Christopher Clavius S.J. in his post at the Roman College. After six years, he got an exemption from his teaching duties in physics, mathematics, and Oriental languages so that he could devote himself full time to research.

He traveled to study volcanic eruptions and earthquakes in places like Malta, Naples, and  Sicily, but otherwise his research was based on his own experiments and correspondence he received from Jesuits around the world and scientists throughout Europe.  His areas of interest knew no limits, and his goal was nothing short of unifying all knowledge into one schema.

In the 1660s, he traveled around the countryside around Rome, and uncovered the ruins of a small church erected at the site where St. Eustace had a vision that resulted in his conversion to Christianity.  He dedicated his remaining years to rebuilding the church known as the Santuario della Mentorella. 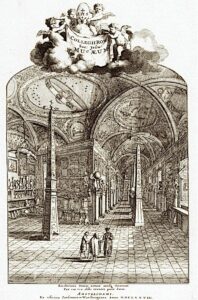 In the 1670s, he organized a museum (the Museum Kircherianum) at the Roman College in order to display the numerous artifacts, oddities, and scientific curiosities he had collected.  It was a prototype for many other museums established by readers of his works.

Though becoming senile in his advancing years, Kircher continued a robust schedule of publication right up to his death on Nov 27, 1680. His heart was buried at the Santuario della Mentorella.

Here is just a sampling of his intellectual output over his lifetime.

One of the few areas of research that prompted travel in Kircher was that of geology. He was interested in the causes of volcanic eruptions, and traveled to the locations of several volcanoes. He even had himself hoisted into the crater of Vesuvius to observe its activity.  He hypothesized a network of subterranean fires deep in the interior of the Earth that was the source of volcanoes and earthquakes.

He also studied fossils, recognizing that they were petrified remains of dead animals. 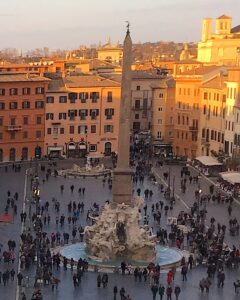 The Fountain of the Four Winds in Rome

Though he himself never traveled to Egypt, Kircher developed an early fascination with the country, its ancient history, and its language.  He devoted considerable time to the task of translating Egyptian hieroglyphics, and provided translations for several of the obelisks scattered about Rome. His progress in this field (a century and a half before the discovery of the Rosetta stone) does not unfortunately hold up well. The translations were rather fanciful, and he never identified the hieroglyphs as a phonetic writing system. Nevertheless, he did make the connection between the ancient Egyptian and Coptic languages.  His early work in this field does earn him a place as a pioneer and founder of Egyptology. 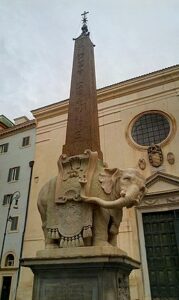 He also advised Bernini on the installation and interpretation of Egyptian obelisks atop the Fountain of the Four Winds in Piazza Navona and on Bernini’s famous elephant sculpture in the Piazza della Minerva.

Kircher had a gift for learning languages, and had developed proficiency in quite a few, both living and ancient.  He understood that languages were related, and his ultimate desire was to uncover the common language that was shared before the Tower of Babel (believing the Biblical event to represent an historical reality).  However, he also recognized that due to innumerable random changes in language over time, this task was ultimately impossible.

He also sought to develop something of a universal language that would assist diplomacy.  He developed a code to represent words and grammatical forms, which could then be deciphered using a specialized dictionary based on one’s native tongue. Thus, one could (in theory) write a message in French, convert it into the universal code, and a recipient in Germany could decode it directly into German.  He was only able to get his technique into the hands of a few noblemen and diplomats, who quickly discovered its numerous shortcomings (for instance, several important words were missing from the code). It was thus never widely adopted. 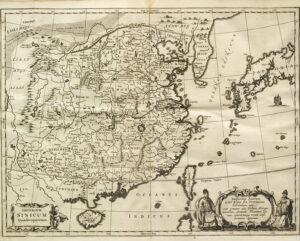 Kircher had the idea to use the difference between magnetic north and true north as a means to find longitude independently of the need for accurate clocks.  He took advantage of the network of Jesuit missions around the world to request such measurements, and calculated longitude and latitude for many major settlements and missions.  His method had a fatal flaw, however: magnetic north is not constant, but varies over time.  Thus, one could not use old charts of magnetic north to calculate longitude based on new measurements. Nevertheless, it worked well enough during this one snapshot in time.

In his China Illustrata, Kircher produced one of the first geographically accurate maps of China.

Medicine was not one of Kircher’s main specialties, but during the plague of 1656 he felt compelled to investigate the causes of the epidemic.  He examined the blood of victims under the microscope (one of the first to do so). He observed the presence of tiny creatures in blood which he termed “animalcules,” and concluded that plague was carried by these small creatures. (Note that this was twenty years before Anton von Leeuwenhoek’s “discovery” of microorganisms.)

His recommendation for reducing the spread of the plague: Isolation, quarantine, and the use of face masks to prevent inhalation of disease agents.  (Sound familiar?)

Several inventions or mechanisms are attributed to Kircher, including the aeolian harp and the speaking tube. He constructed one of the first magnetic clocks. He also made improvements to the magic lantern.

One of the key contributions that Kircher made was in his influence on others in the age just after him.  Many — including Mather, Huygens, Leibniz, and possibly even Newton* — read his work and sought to expand upon, verify, or refute the propositions that they saw there. In short, many of the scientific advances of the late 17th and 18th centuries owe their inspiration to Kircher.

There is a crater on the Moon that bears his name.

Authors such as Umberto Eco have found an endless font of inspiration in Kircher.