An edited version of this article first appeared in The Tablet in January, 2004. It was the first column I wrote for them.

Lake Superior at wintertime from Marquette, frozen and covered in snow, looks like a scene from another planet. Taking the cell phone photo is my brother

I spent Christmas morning [2004] with my brother Edwin, amid the snow and frigid winds whirling across Lake Superior and around the tiny city of Marquette, Michigan. Between Christmas Mass and Christmas dinner, I kept an eye all day on my computer, checking the BBC web site every few hours, hoping to hear news of the British Mars lander, the Beagle II. Alas, though the Beagle had landed, we never heard it bark.

I felt for my friends on the science team, Colin and Ian and the others, watching with ever fainter hope as the dream they’d pursued through the years of planning and fund-raising, constructing and testing, launching into space and guiding to the surface of the planet, finally at the last minute failed.

Landing a probe successfully on Mars is a very difficult proposition; the failures have outnumbered the successes, two to one. And even a successful landing is not enough. Every mechanical and electronic component has to have survived the radiation of space and the impact of the landing, functioning on its own exactly the way it was designed to. Anyone who’s ever fought with a VCR, or a toaster, here on Earth can appreciate how difficult that can be; just imagine a Mars craft hurtling through space, flashing “12:00, 12:00”…

I have a friend, Steve Collins, who’s an engineer at the Jet Propulsion Laboratory (JPL) in Pasadena, California; he worked on the Pathfinder lander to Mars [in 1998]. Three years later, when the star-crossed Deep Space One mission lost its navigation camera, he was one of the team who programmed the science camera to track a bright star and keep the spacecraft on course to a spectacular, and unexpectedly successful, rendezvous with Comet Borrelly. He knows the odds. He tells me that, in the years leading up to the arrival of the two American Mars Exploration Rovers, Spirit and Opportunity, he would hear one of the engineers building these unwieldy, hopelessly complicated craft at JPL privately refer to them as the “Mars Exploding Rovers.”

And yet, beating all the odds, on the morning of Epiphany (Sunday, January 4th, 2004), a Martian looking upwards might have seen a sign in the sky: the light of a plummeting object; then a parachute; then a retrorocket; then a bouncing ball tumbling across the red dusty plains. When it came to rest, the ball was deflated and the rover emerged from its cocoon. The Spirit had landed.

I’m looking forward to the next few months as we get to explore, close up, the surface of Mars. Is that flat area inside Gusev Crater really a dried lake bed? What do the rocks peppering the surface really look like once the surface dust and Martian desert varnish is scraped away? How do the chemical compositions compare with the rocks that come from Earth’s volcanoes, and what does that tell us about how Mars evolved, and about the composition of the stuff that made up Mars in the first place? How different – and how similar – is Mars to Earth?

And those questions inevitably gravitate to the question of life. If we could find a form of life on Mars which was chemically distinct from Earth life – different DNA, different chemical bases – it would say that life had arisen independently here, there, and… maybe… everywhere.

Will we find life there? What would that mean to our sense of who we are, and how we fit into the universe? And – looking further down that road – would finding intelligent life in some other place be a Copernican revolution, shaking human society at its roots? Or have we already become so accustomed to the idea of alien life, thanks to a thousand science fiction stories and UFO sitings, that we’ve already factored the aliens into our consciousness?

I am reminded of the 16th-century debate between De Las Casas and Sepulveda on the question of whether the newfound inhabitants of the New World had souls. One of the most common questions we get at the Vatican Observatory is, “would you baptize an extraterrestrial?” (I say, I’ll only baptize them if they ask me to. I’m more afraid to ask: would you ordain one?) We won’t know until we find them; or they find us.

I’m confident we won’t find life on Mars this trip. This rover isn’t equipped to dig deep enough to get to the water layers that may be (maybe) just below the surface. But the questions answered by this rover will inspire the questions to be solved by the next set of missions. (Thanks to the rhythms of Mars’ and Earth’s orbits, we get a good opportunity to send spaceships to Mars once every two years.) Eventually, brick by brick, we’ll build a more complete structure to explain how Mars works, chemically and physically. And once that’s done, we’ll have a better chance of seeing if there’s any place in that structure for living creatures.

Indeed, even if there’s no living creatures on Mars today, and even if there never has been any in the past, the odds are overwhelming that some day there will be life on Mars. Our life.

Of course President Bush’s 2003 proposal for a return to the Moon and an eventual manned mission to Mars was a political move, not a scientific one. That’s only appropriate; politics is his duty. And of course neither mission will happen soon [indeed, not at all… the downside to having politics control exploration]. But that’s not the point. The fact that, fairly or not, proposing such an ambitious thrust to the space program is seen as a political stunt, reveals the more significant truth: that space exploration is thought to be so politically popular that it is worth the stunting.

But is it worth the cost? The Americans spent nearly half a billion US dollars for the two lander missions. Of course, that’s only about two days’ cost of the war in Iraq. Beagle II was a bargain, at about a tenth of that price. Indeed, it’d cost more to make a Hollywood movie about the building of Beagle II, than it actually cost to build the lander for real. Compared to the salaries of pop stars and football players, such expenses seem like small change. And yet, that’s still a lot of money. Worldwide, the total amount of money funding research into planetary sciences every year runs to several billion dollars. And a thousand bright, well-educated people are dedicating their talents and their lives to this esoteric, utterly impractical enterprise.

I’m one of those people. And my salary is paid by the Vatican. Surely some orphanage or refugee camp could use that money instead, right?

When I was thirty years old, long before I entered the Jesuit order, I asked myself why I was wasting my life studying the rocks of Mars when people were starving in the world. I could find no answer. And so I quit my research post at MIT and joined the US Peace Corps. They sent me to Africa. When I arrived in Nairobi, the Africans had one request of me: could I teach them some astronomy? Could I show them Mars?

The graduate students at the University of Nairobi, and the schoolchildren and elders in the villages upcountry where I went telescope in hand to show the planets, shared exactly the same zest for astronomy that I found when I visited my home in Michigan. This curiosity, this hunger to know, this desire to explore is what distinguishes us from contented cows. It is what makes us human.

Indeed, in our culture it is the artists and the scientists and the explorers who are remembered, long after the kings and generals of their ages are forgotten. How many people on the street could name the Pope who got so mad at Galileo? The cities of my homeland, America, are named not for generals or businessmen, but for saints and explorers – people like Pere Jacques Marquette, the French Jesuit priest who explored the Great Lakes and the upper Mississippi River, experiencing Lake Superior winters without benefit of central heating. (He did baptize his aliens. They asked.)

And indeed, in a universe so loved by its Creator that He gave it his Son and announced His coming with a star in the east, a life dedicated to the study of that universe is one way to become more intimate with its Creator.

The glory of the Mars landings is that, in the face of our daily diet of suffering and injustice and war, and against the odds of frustration and failure, for once we humans have also been able to work together and succeed in what for any time until this generation would have been unthinkable. We have reached out across space to touch another world.

My friend at JPL, Steve Collins, sent an e-mail on Thursday about the week he’d spent guiding Spirit to the Martian surface. He ended by describing his trip home from JPL after the lander had finally arrived safely.

“I spent a few minutes outside in the evening watching the little red  speck that is Mars setting in the western sky,” he wrote. “On Mars, there’s a complementary little blue speck, a morning star that rises a couple of hours before sunrise. Sunrise on Mars.  It’s still weird to find myself working there.” 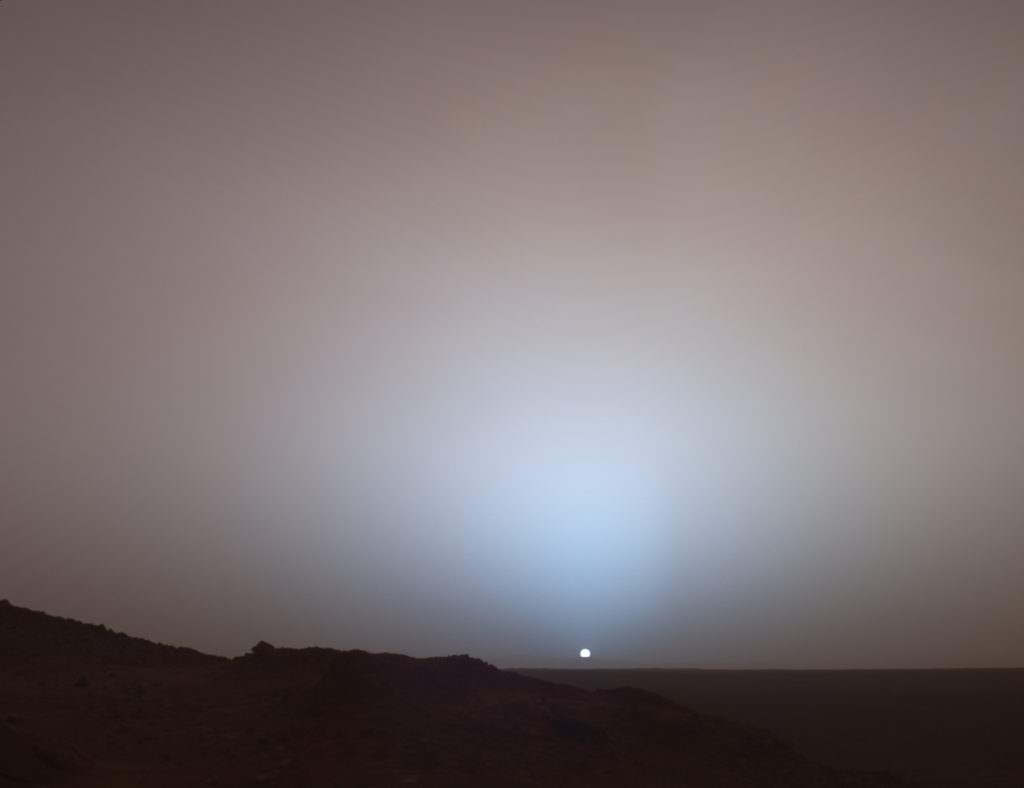 Mars sunset over Gustav Crater, imaged by Spirit in 2005

Spirit and Opportunity have had remarkable success. Originally planned for a three month mission, they’ve been functioning for more than 11 years. While Spirit is now immobile in the Martian sand, Opportunity is still roving and taking data.

Alas, we never did hear from Beagle II. In January 2015, images from NASA’s Mars Reconnaissance Orbiter HiRISE camera found it on the Martian surface; from those images, it appears that two of the spacecraft’s four solar panels failed to deploy, but instead blocked the antenna used to communicate back to Earth. 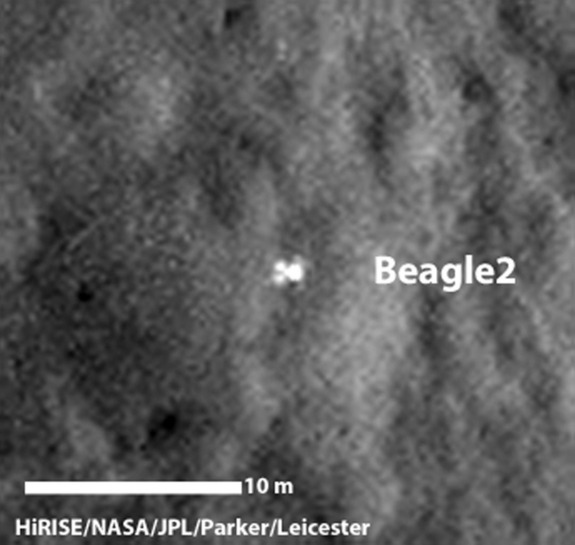