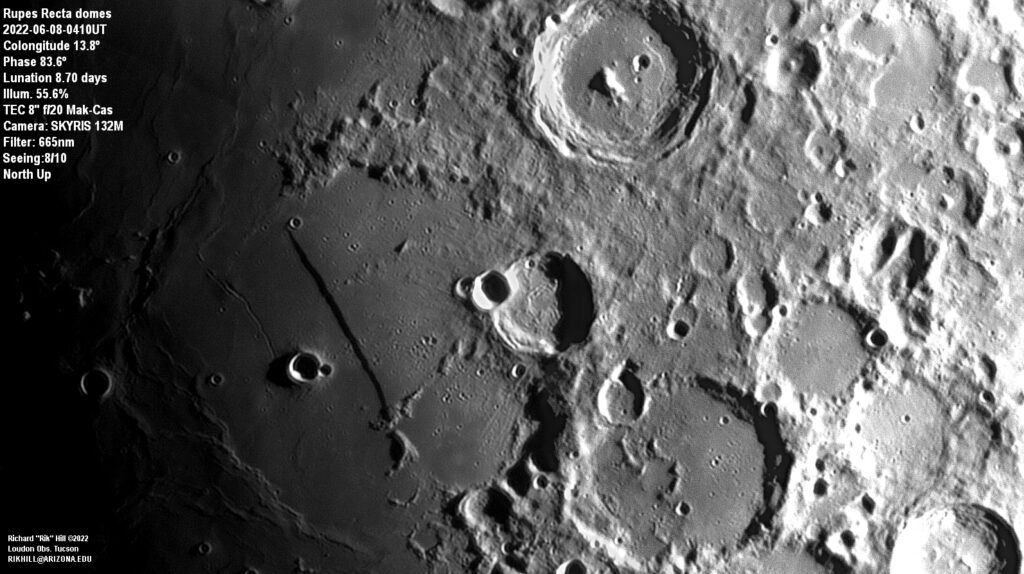 Southwest of the great crater Arzachel (100km dia.), seen here in the top middle of this image, is the feature called the Straight Wall, or Rupes Recta, a fault running some 114km. In truth, it is neither straight nor a wall. It is an escarpment some 2-3 km wide with a height of 240-300 m (possibly even 450m according to Wood) so it is far from the vertical cliff it at first appears. Neither is it straight as can be seen here! At the south end of the Rupes is an interesting set of mountains nicknamed the Stag’s Horn Mountains because of their shape. It’s not an official name but many lunar observers from the 1950s and 60s are well familiar with them by that name. About 40 km further west is Rima Birt that parallels the Rupes and between the two is the recently formed crater Birt (17km) overlapped by the even more recent Birt A on the east side. At its north end is another shorter unnamed rima. All this seems to sit in the ruins of an ancient flooded crater some 300 km in diameter. On the east side of this larger structure is the crater Thebit (60km) and below right the larger crater Purbach (121km).

Notice the shadow cast by Birt. There’s a mild swelling just beyond and below it. If this is a dome, there is no listing for it. Moving further up the Rupes you get to a point where it widens at the top showing another swelling. This is a recognized dome Birt 1 or B1. Over on the parallel small rima, a little north of this spot is another widening and swelling that is Birt 2. These are among the most difficult domes I have recorded yet but what about the southernmost one? Time will tell.

88  |  Exploration above and below